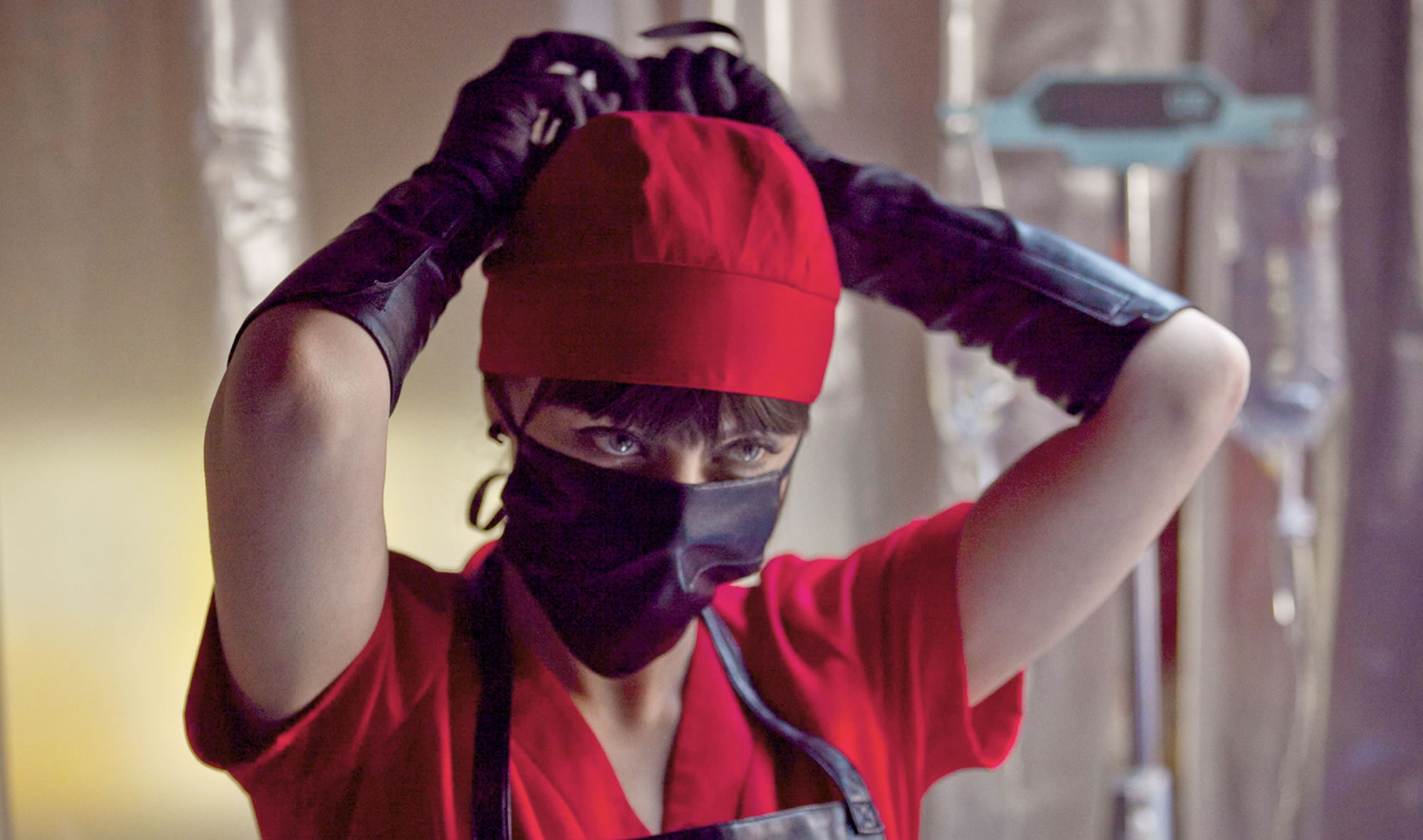 Despite its picturesque views of mountains, sun-kissed prairies, and deep woods, Canada has a reputation for being a bizarre and scary place.

In 1971, Canadian literary theorist Northrop Frye argued that the main trend (or symptom) in Canadian poetry was “a terror of the soul” invoked by the vast and unfeeling landscape.[1] While critics have since debunked this theory, deeming it misleading or reductionist in the sole favour of colonial English-Canadian history, themes of horror and madness persist in the country’s cultural products—such as its abundance of horror films.

In 2015, film critics Gina Freitag and Andre Loiselle argued that the true horror of Canadiana exists in the “interval between external threat and internal dead”[2]—in short, horror is everywhere and nowhere; it is inside our bodies and minds, and it is waiting for us in the dark outside of our remote, snow-covered homesteads (and even our suburban homes). With no definitive source, Canadian horror is fascinating because there are very few limits. Read on for 10 Canadian films that delve into this terror in innovative ways, many of which flesh out the distinct sub-genres of science-fiction horror and body horror.

Top: Mary Mason (Katharine Isabelle) gets ready for one of her bloody underground surgeries. 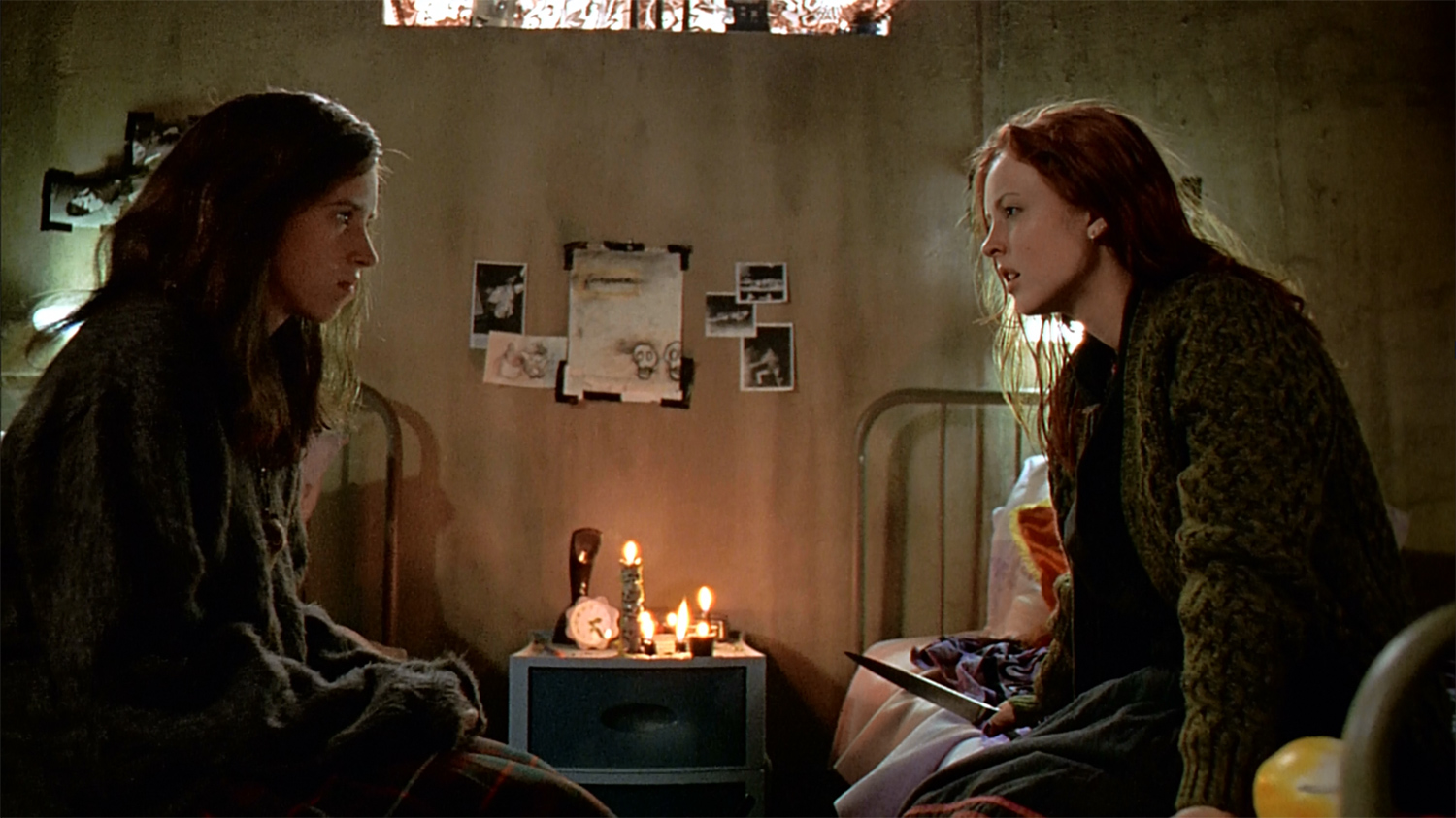 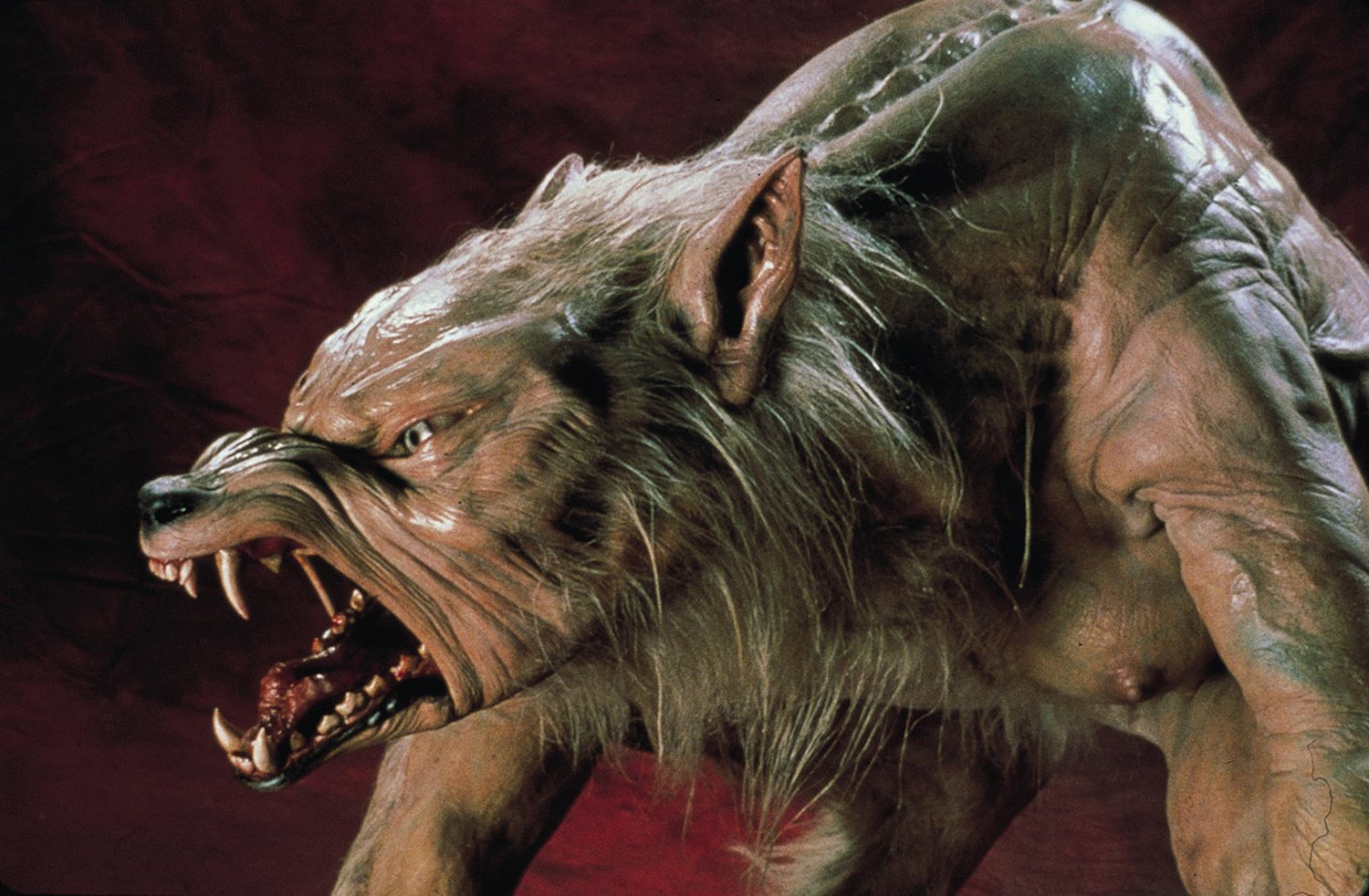 All of the monster effects in “Ginger Snaps” were achieved using makeup and costumes.

In 2000, John Fawcett directed “Ginger Snaps,” a film that would gain critical acclaim and a cult following. In a unique twist to the male-dominated werewolf subgenre, “Ginger Snaps” features a female human-to-beast transformation, likening the change to puberty. The film centers around two death-obsessed teenage sisters, Brigitte (Emily Perkins) and Ginger (Katharine Isabelle). They have remained close since childhood, even making a pact to die together: “Out by sixteen or dead on the scene but together forever.” However, on the night Ginger gets her first period, she is bitten by the Beast of Bailey Downs—an unidentified monster that has been terrorizing the girls’ suburban community. Ginger begins to change, slowly and irreversibly, becoming increasingly sexual, deviant, and aggressive, alienating herself from her sister and her own body. The darkly humorous portrayals of suburban life and sexual maturity make this movie fascinating to watch. 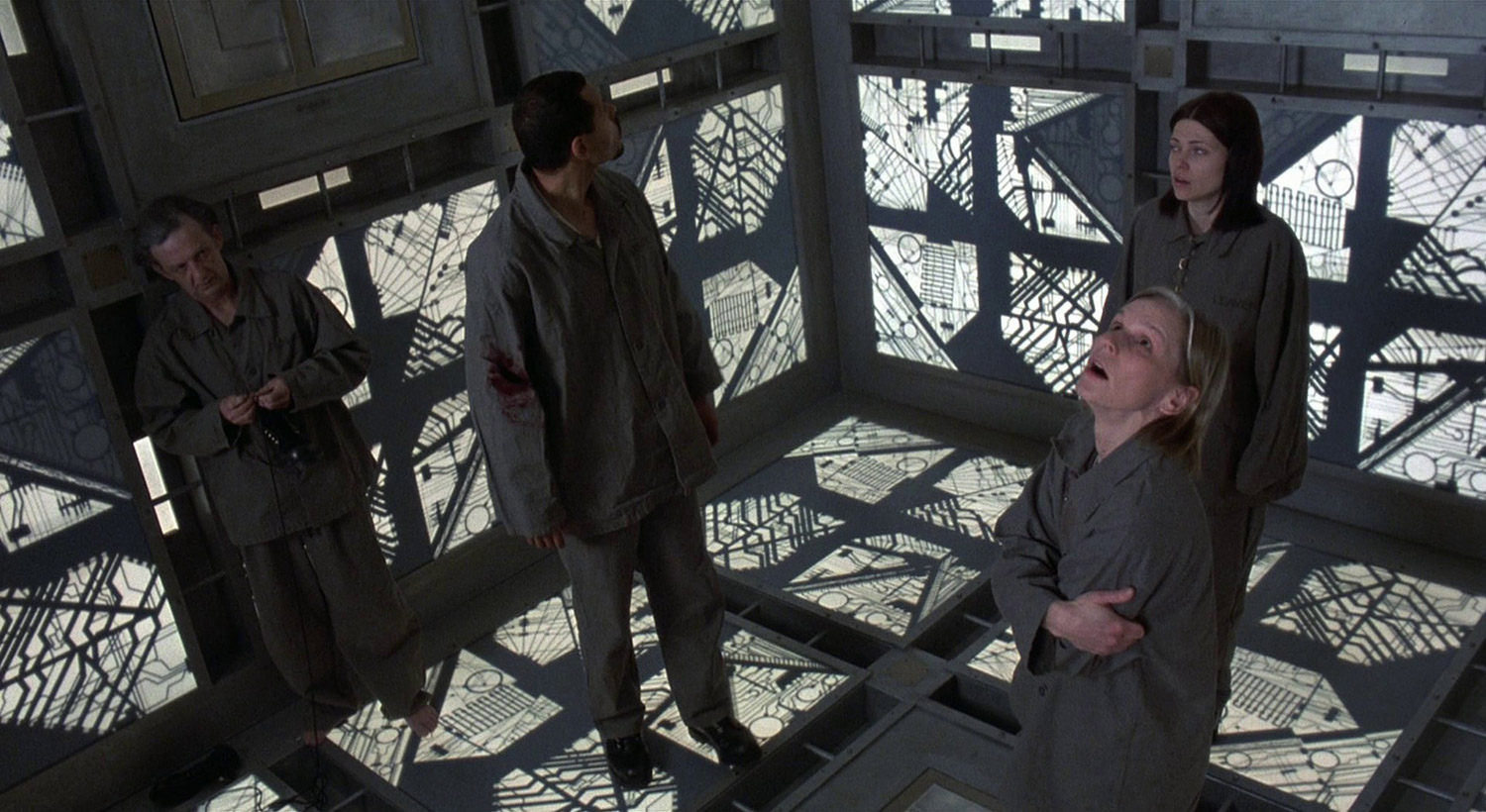 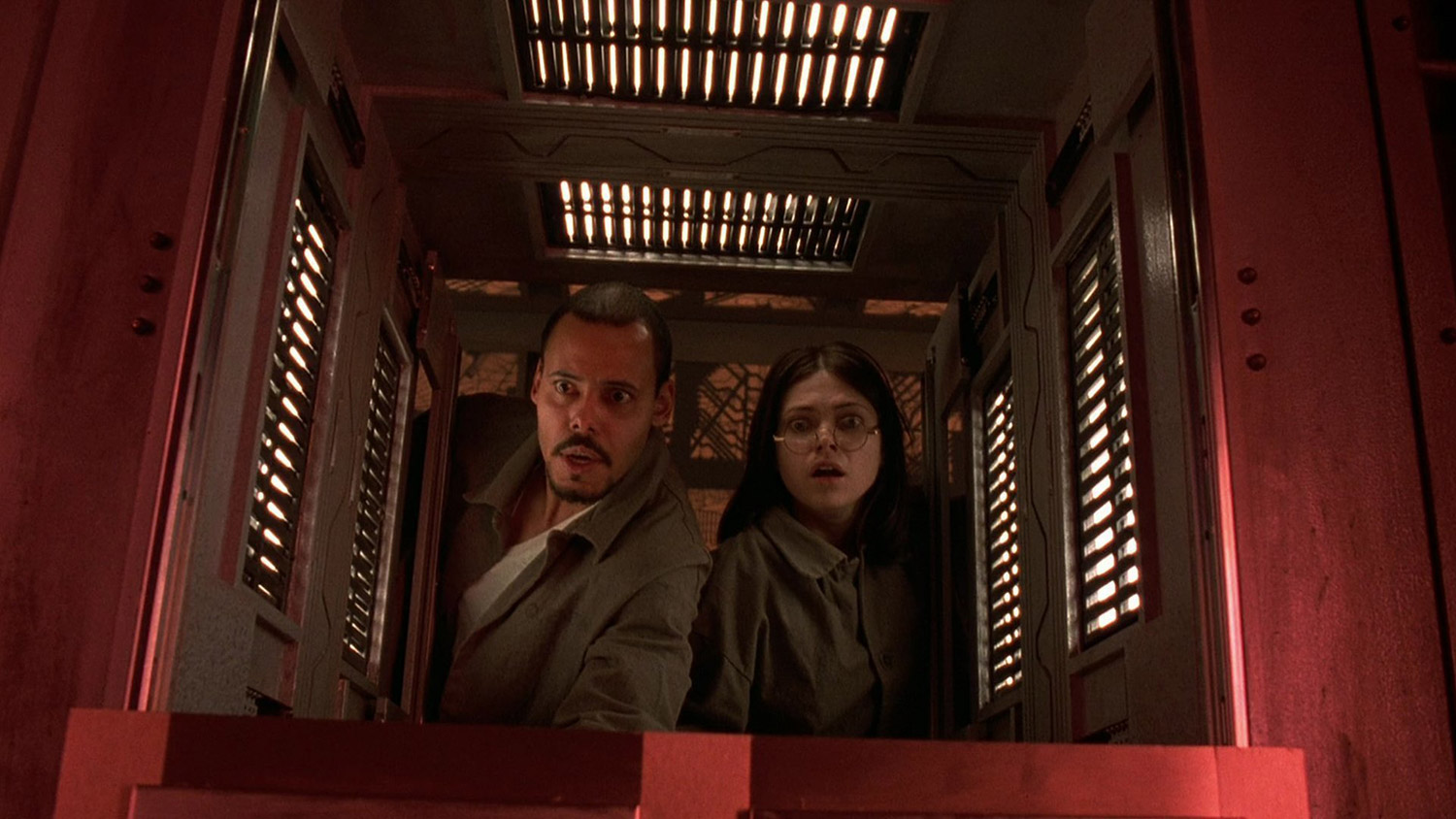 There is almost certain death around every corner.

Seven years before the original “Saw,” Canada had its own movie about puzzle-rooms of death. Vincenzo Natali’s 1997 film “Cube” fits into the fairly large subcategory of Canadian science-fiction horror. Six people wake up trapped in a cube-shaped room. The ceiling, floor, and sides of the room all have hatches that lead to more cube-shaped rooms, each a different color. However, as the characters quickly realize, going through the wrong hatch triggers a deadly booby trap. Stuck in a nightmarish situation without reason, the group degenerates into a mess of bloody, angry, terrified egos. “Cube” was appreciated for its surrealist imagery and original concept, and like “Ginger Snaps,” acquired cult status. 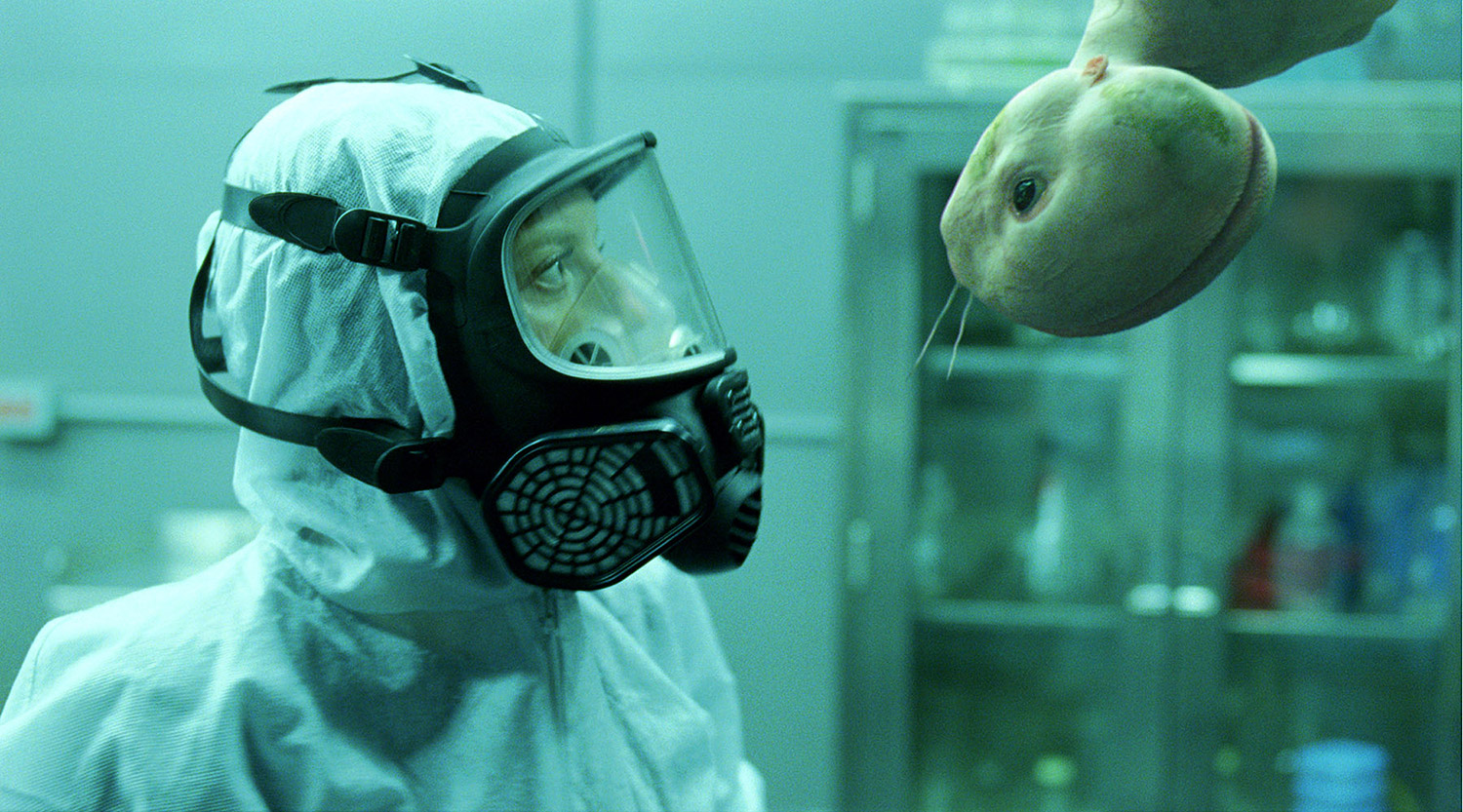 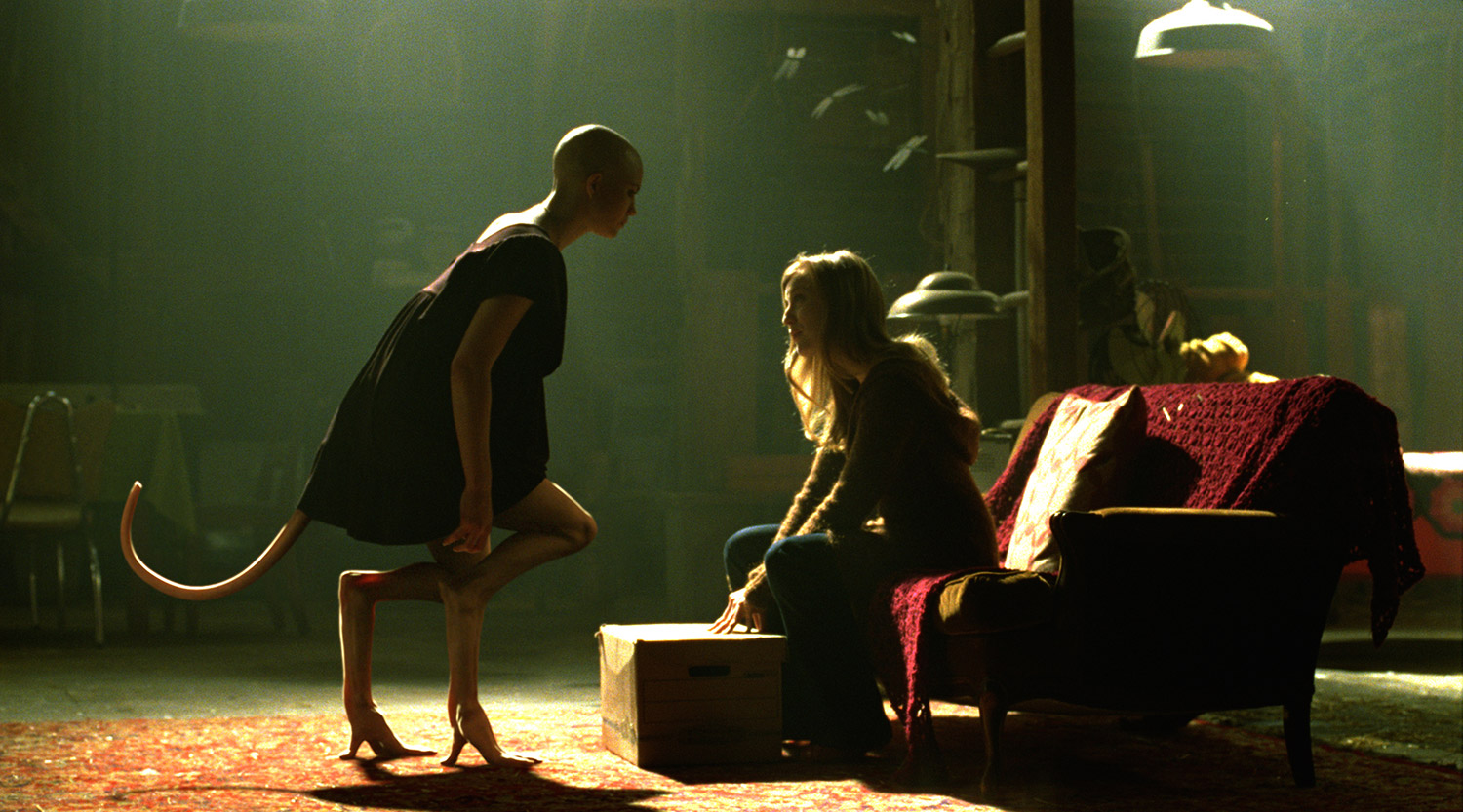 “Splice” explores the implications of unnatural birth and the extent of human narcissism.

Following along in the science-fiction horror sub-genre, “Splice” (2009) explores fears surrounding the advancement of science—specifically, genetic engineering—and the ethical, sexual dilemmas that occur when the boundaries between “human” and “animal” are abolished. Clive Nicoli (Adrien Brody) and Elsa Kast (Sarah Polley) are two scientists hoping to make history by cloning the first human–animal hybrid. Aggressive at birth, the female offspring, named Dren, quickly matures into an intelligent, humanoid life form. Elsa takes on the mother role. After Dren reaches sexual maturity (her aggression returning with puberty), the hybrid seduces Clive. With technology as the terrifying new frontier, “Splice” projects fears of a future where science has devalued life and corrupted the domestic sphere. 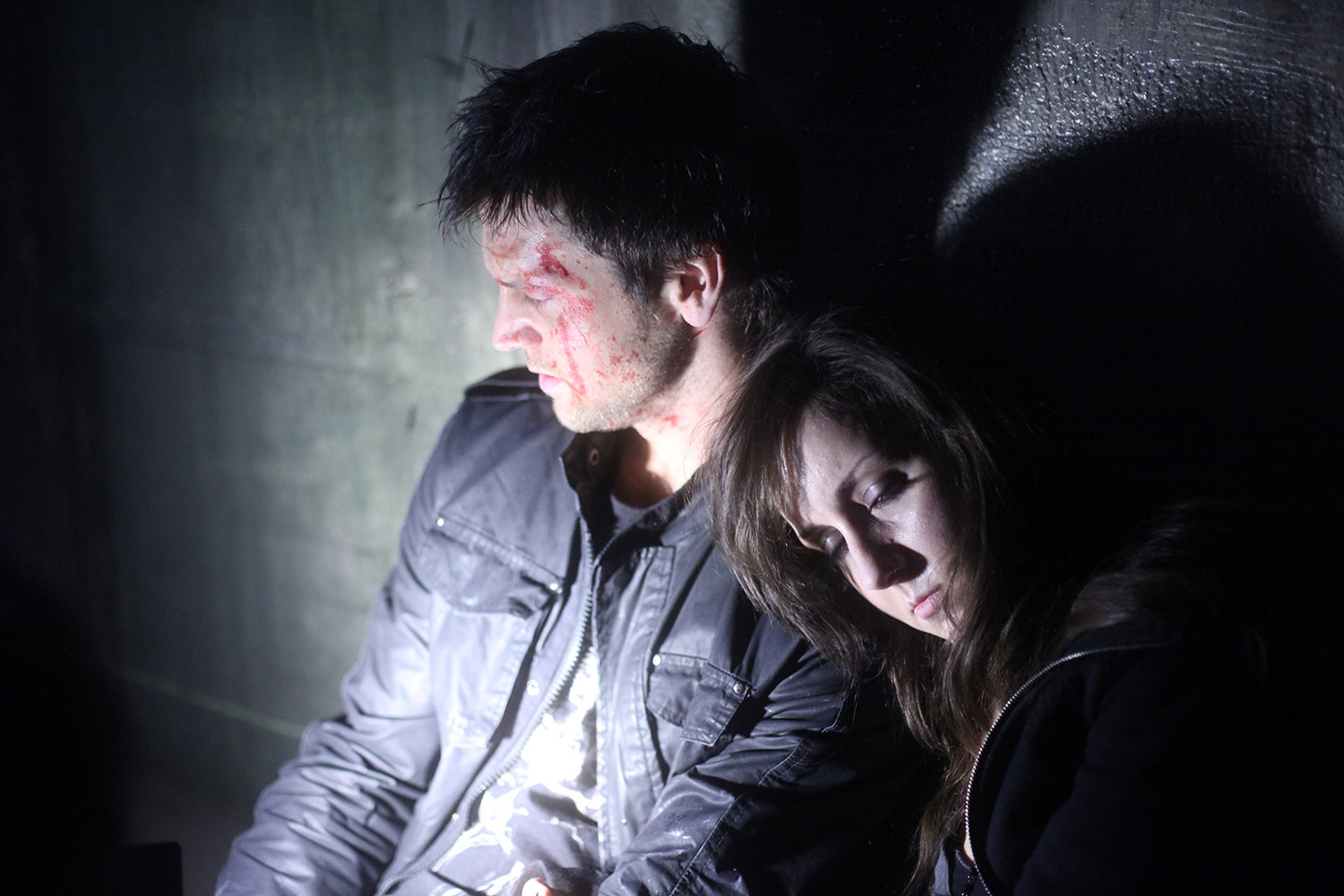 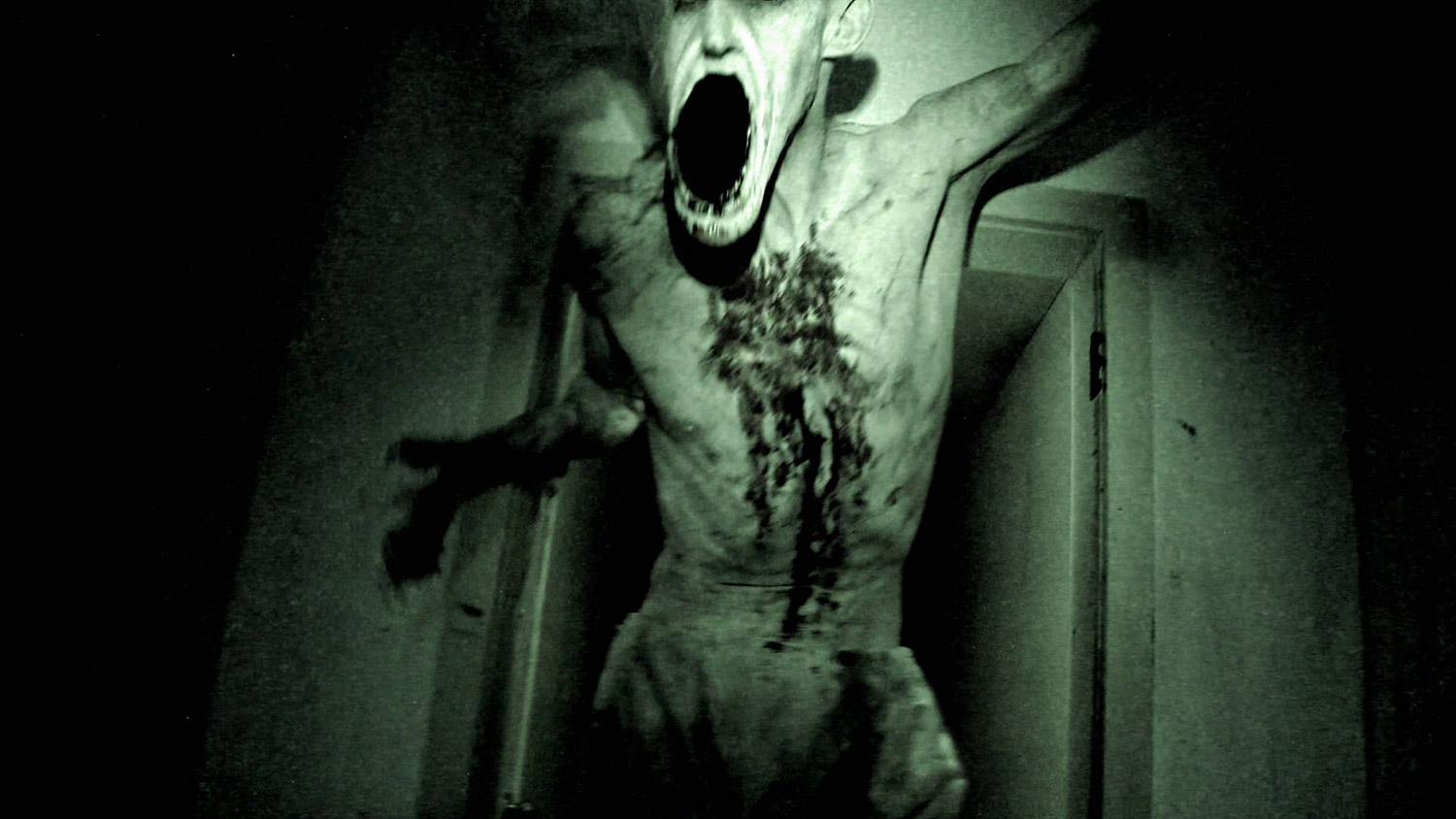 The ghosts of “Grave Encounters” are demonic and erratic.

Whereas “Splice” examined the cost of too much scientific knowledge, “Grave Encounters” (2011) demonstrates the terror that occurs when human logic and reason are proved wrong. Directed by the Vicious Brothers, this film follows a crew of phoney ghost hunters who run a reality television program about their investigations. They agree to spend a night in the allegedly-haunted Collingwood Psychiatric Hospital, foolishly locking themselves inside in order to sensationalize their show. The viewer isn’t surprised when terrifying apparitions begin to appear. As group falls apart, madness sets in, and the hospital’s dark history begins to reveal itself, human beings are once again shown to be at the mercy of the great unknown. While not terribly original in its use of the found-footage technique, “Grave Encounters” offers some tense moments and disorienting scares. 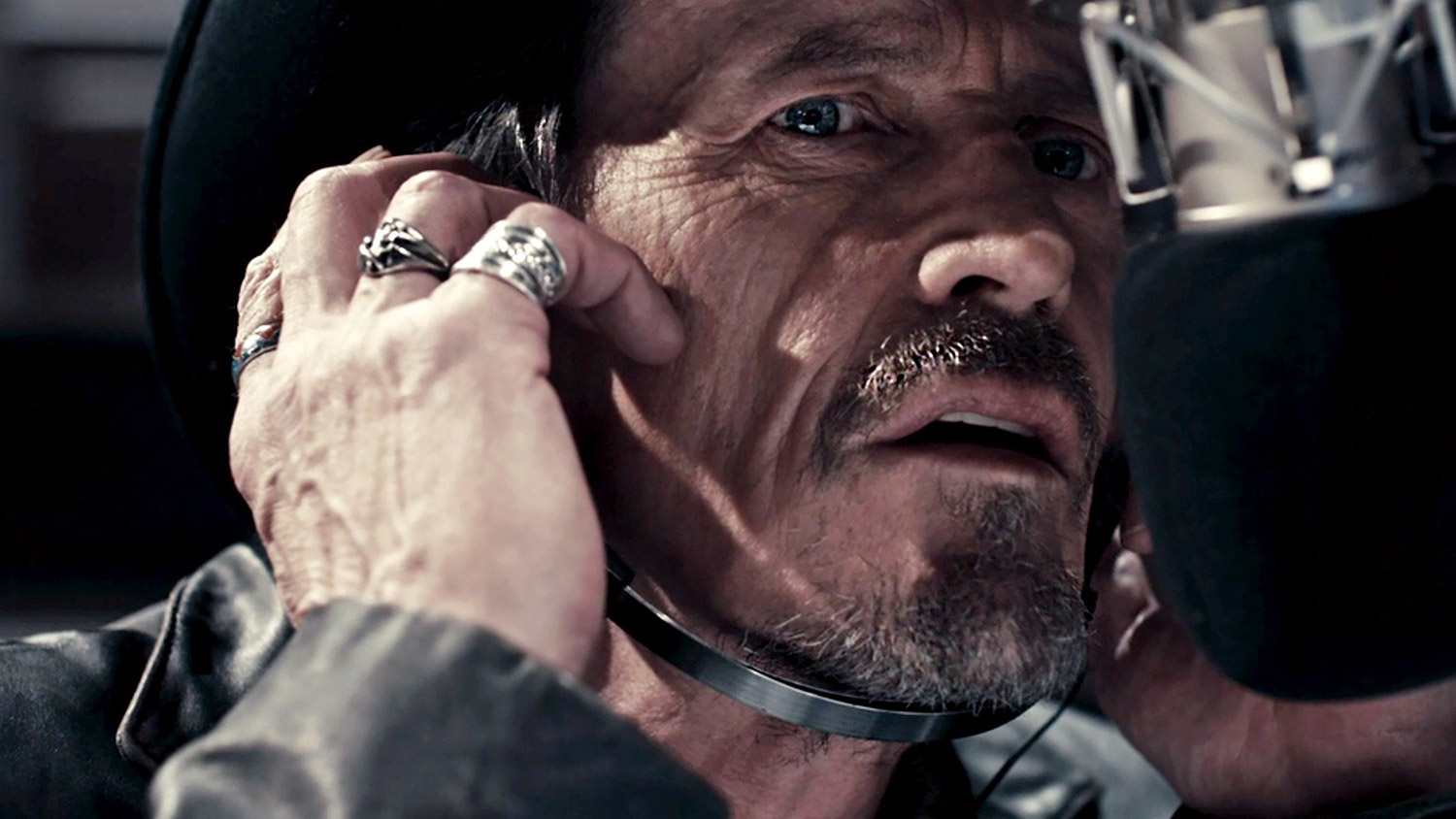 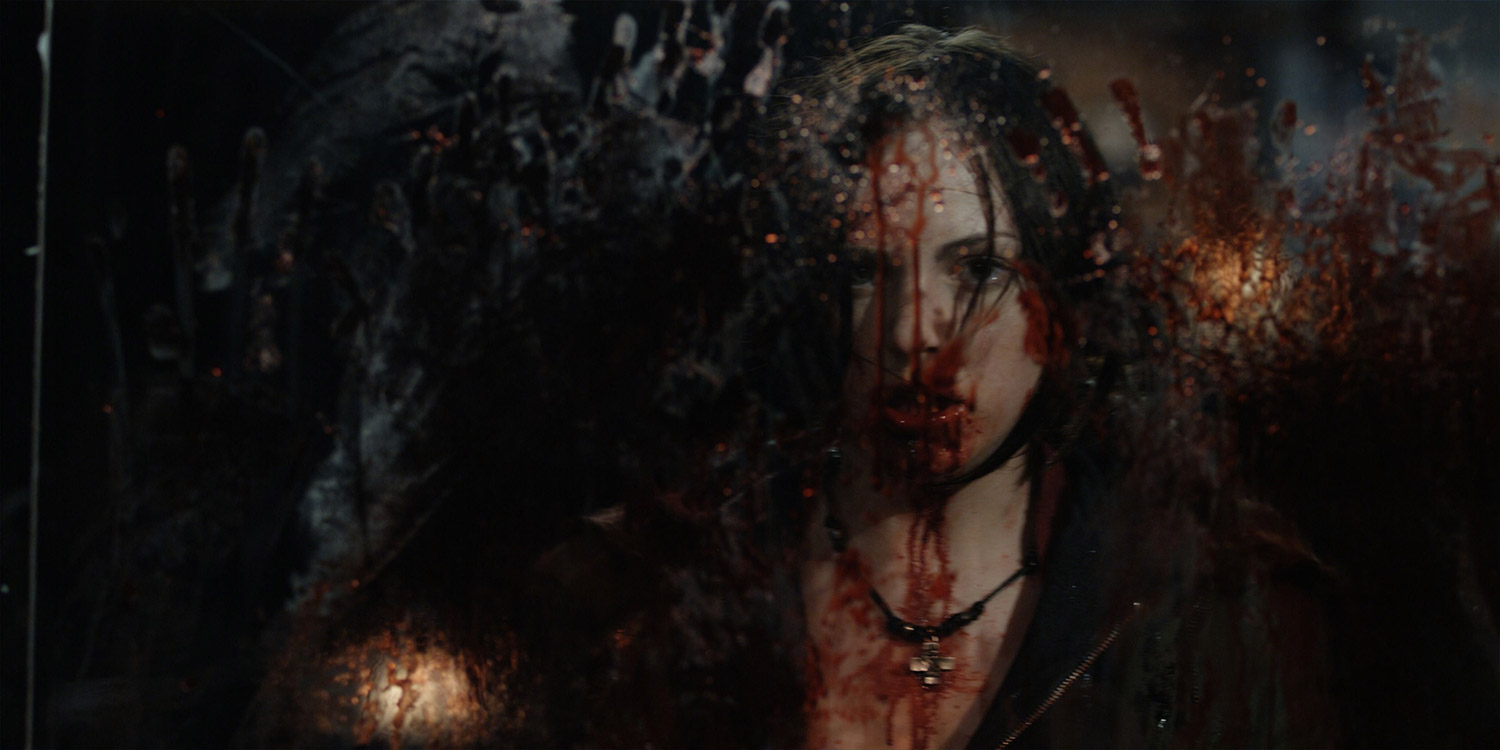 Viewers interested in semiotic theory will be especially pleased with the horror that drives “Pontypool.”

Bruce McDonald‘s “Pontypool” (2008) is a zombie film like no other. Set in the small community of Pontypool, Ontario, radio host and reformed shock jock Grant Mazzy (Stephen McHattie) is broadcasting from inside the studio when the outbreak begins. Ken Loney, the station’s helicopter reporter, announces a violent riot outside a doctor’s office, growing increasingly panicked as he describes people who appear to be eating their way inside of others. Eventually, Grant and his staff inside the station discover that the virus spreads through words—more specifically, the listener’s comprehension of the words. In their book about Canadian horror, Gina Freitag and Andre Loiselle intriguingly suggest that “Pontypool” uncovers fears over assimilation, pointing to how Canada’s “shared language and British ancestry with the US has made it challenging for English Canada to distinguish its cultural productions from those south of the border.”[3] 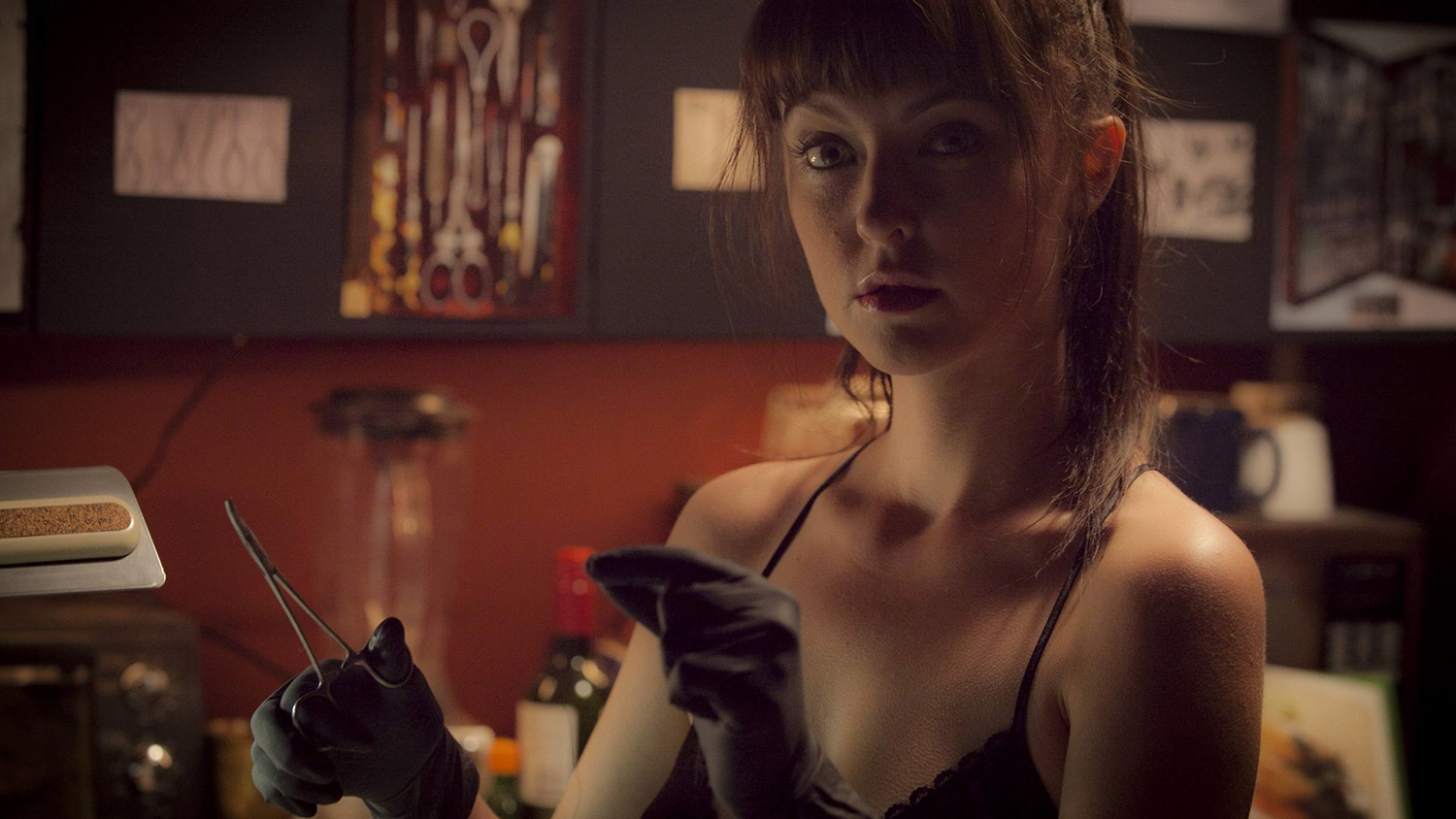 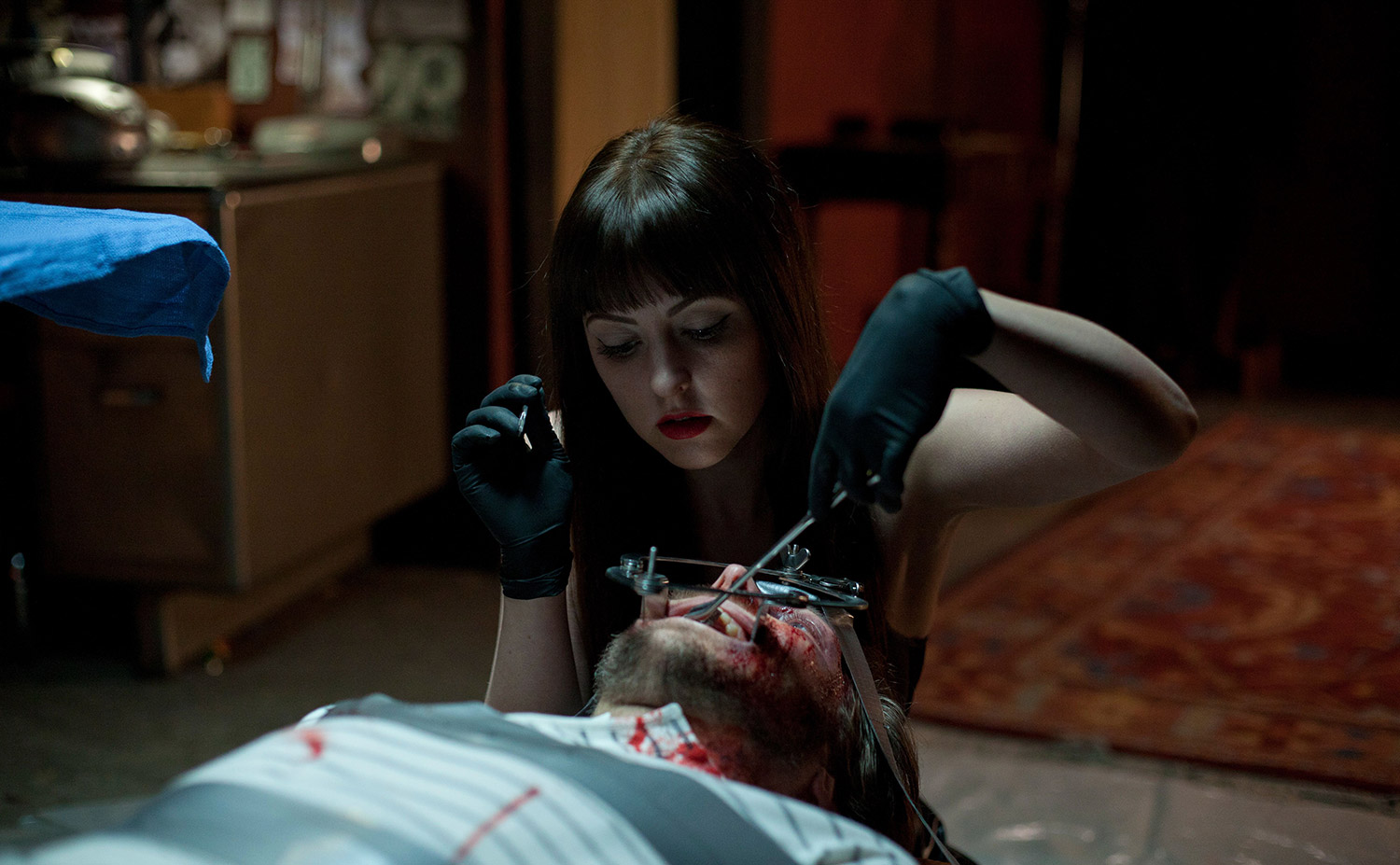 The subject of cultural assimilation hovers around the title of “American Mary,” a 2012 film that was shot and produced in Vancouver but set in Seattle. Borders aside, the gloomy-grey Pacific Northwest is a befitting backdrop for Mary Mason (played by Katharine Isabelle, who also starred in “Ginger Snaps”), a med-school dropout who uses her talent for surgery to both please her clients and punish her abuser. As scalpels gouge into flesh and lumps of shredded genitalia fall to the floor, the movie’s most disturbing aspect might be Mary’s gentle, quasi-seductive tone as she describes her gruesome process to her suffering “test subject.” Falling into the body horror sub-genre of Canadian cinema, “American Mary” exhibits fears over the permeability of the body and the uncomfortable juncture of death, gore, and sexuality, also seen in the Canadian films “Crash” and “Kissed.” 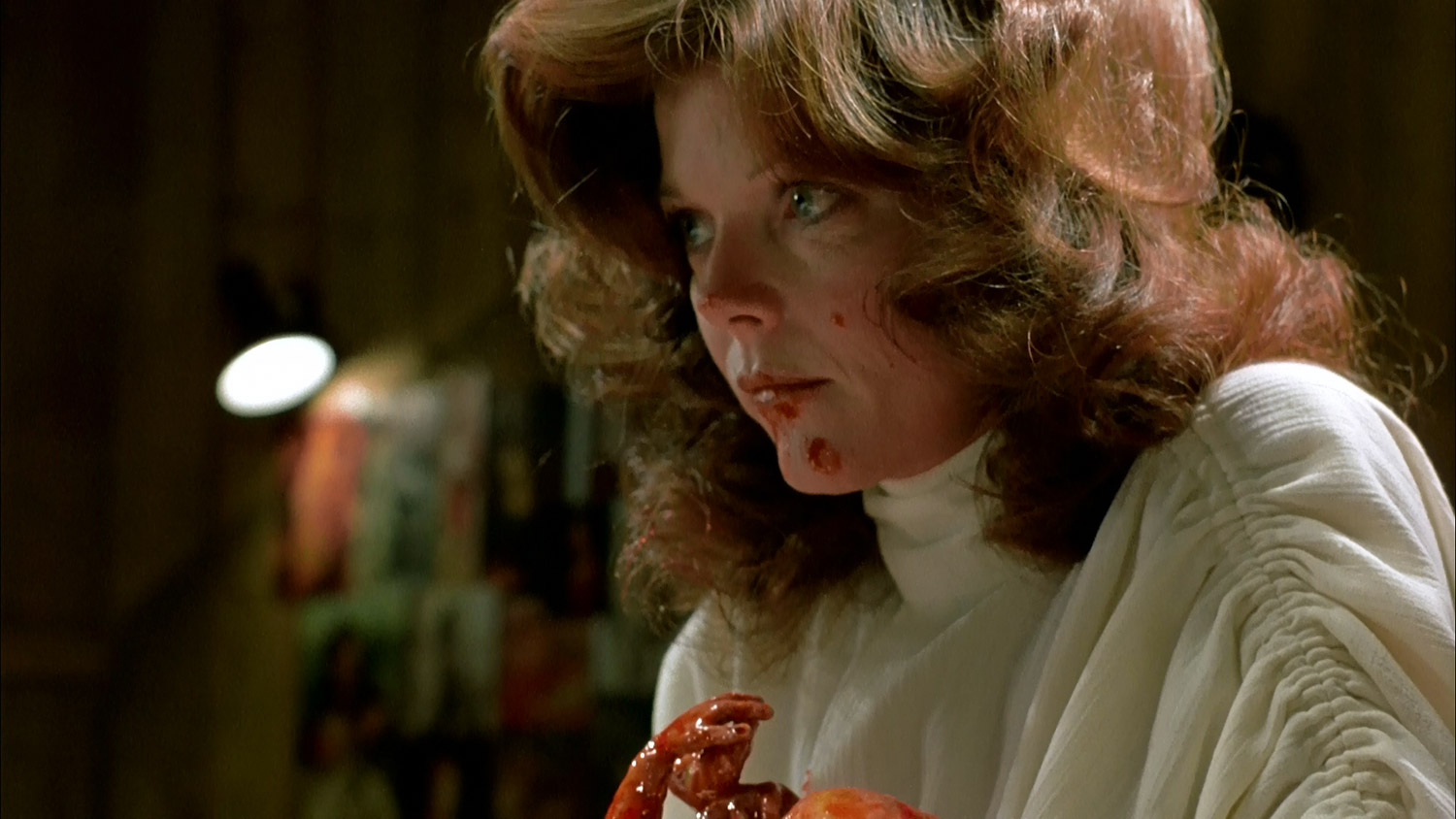 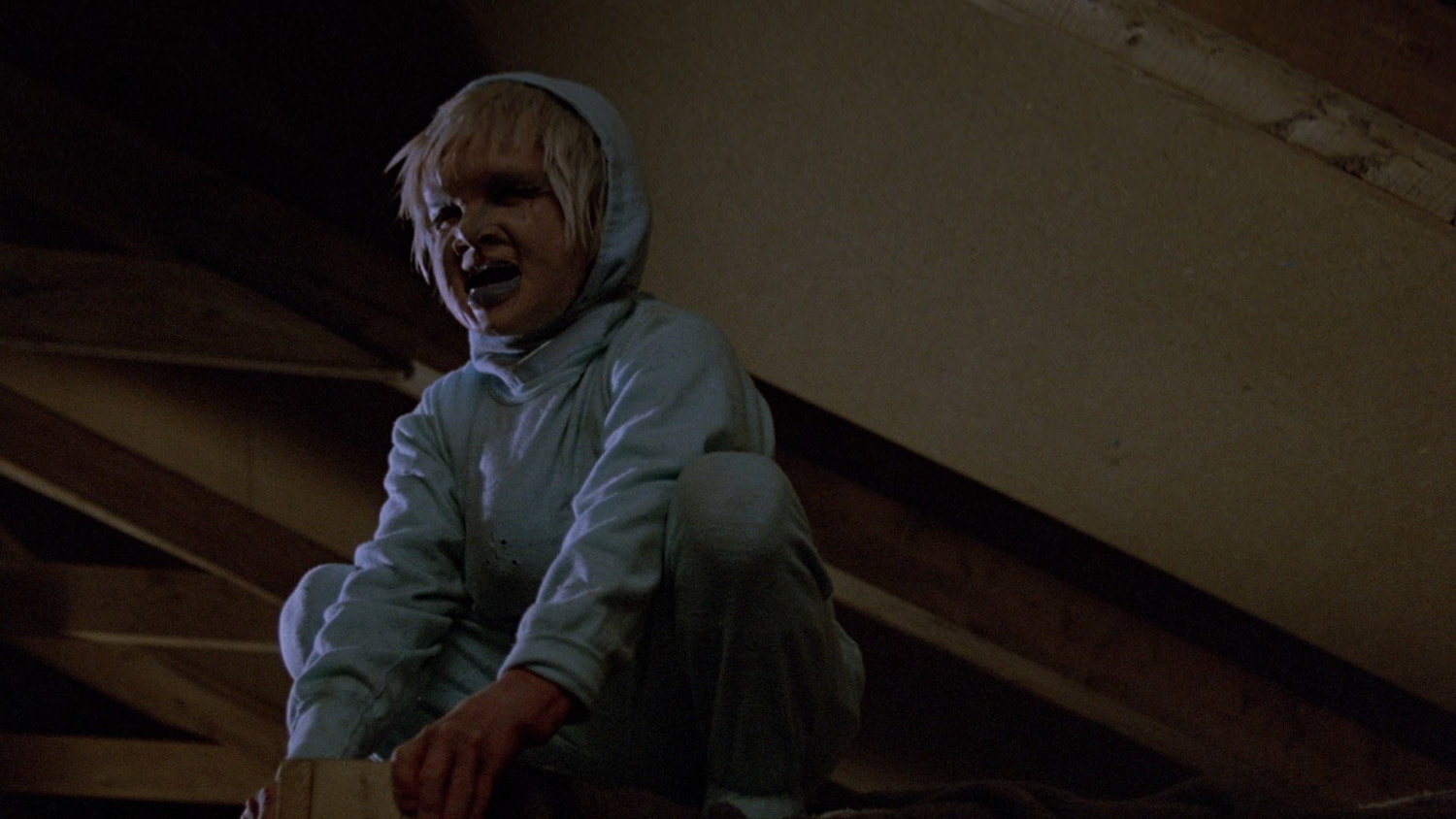 You won’t forget the image of Nola biting through her external amniotic sac.

This list would not be complete without a film by Canadian director David Cronenberg, the famous father of body horror. Similar to “Splice,” “The Brood” (1979) shakes out anxieties surrounding science and reproduction. Nola Carveth (Samantha Egger) is a patient of Hal Raglan (Oliver Reed), a psychotherapist who uses a technique known as “psychoplasmics,” which helps his patients by turning their psychological disturbances into physical manifestations. In the midst of a child custody battle with her husband, Frank (Art Hindle), Nola begins to asexually produce a horde of violent, mutant, child-like creatures who enact vengeance on those who have harmed or annoyed her. Born without sexual organs and, significantly, belly buttons (which are the ultimate signifiers of natural birth), the creatures of “The Brood” play with the question of origins—something that Canada, floating between histories of European colonization, displaced First Nations, Quebec separatism, immigration, and American influence, has commonly explored through its art. 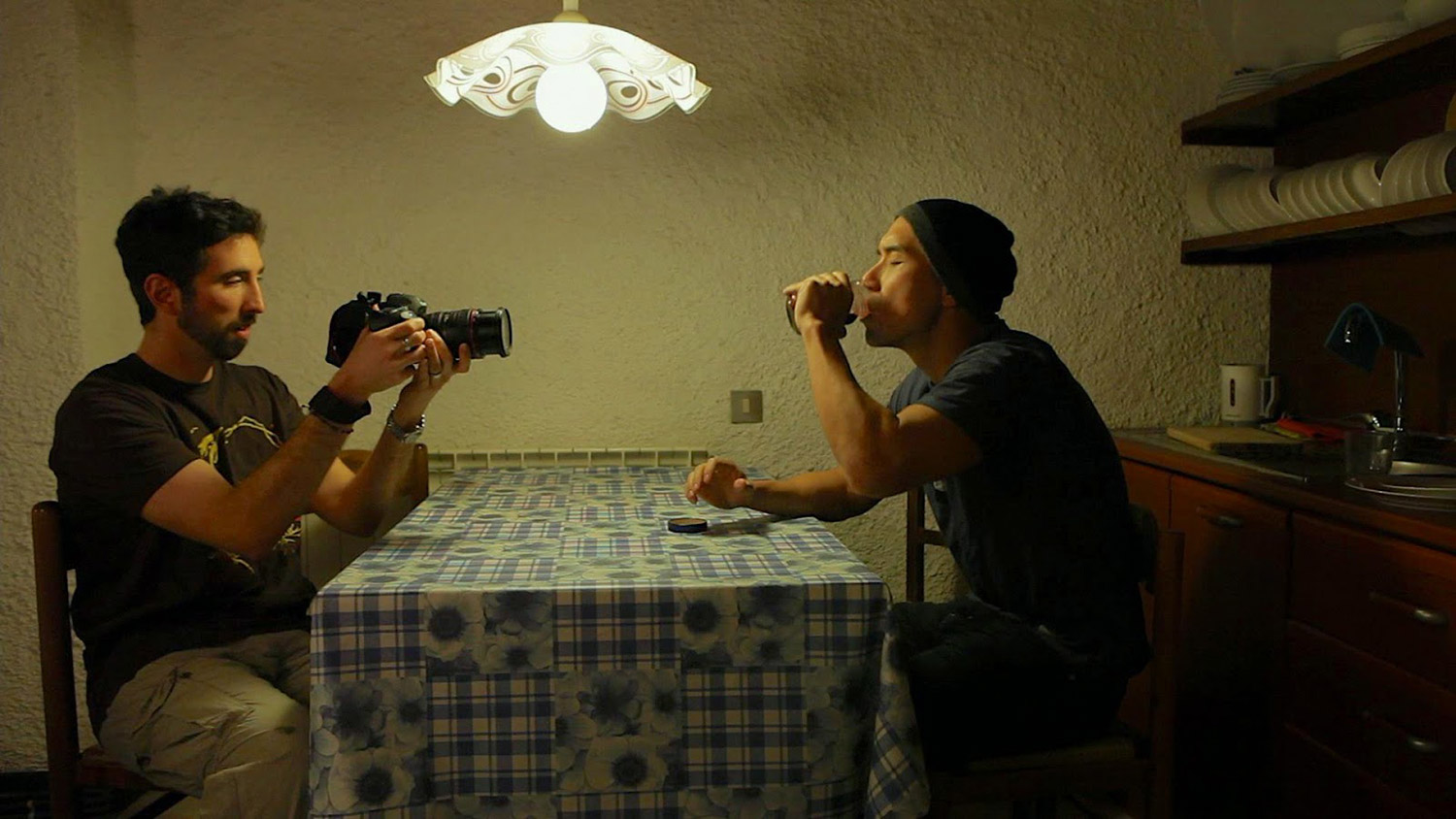 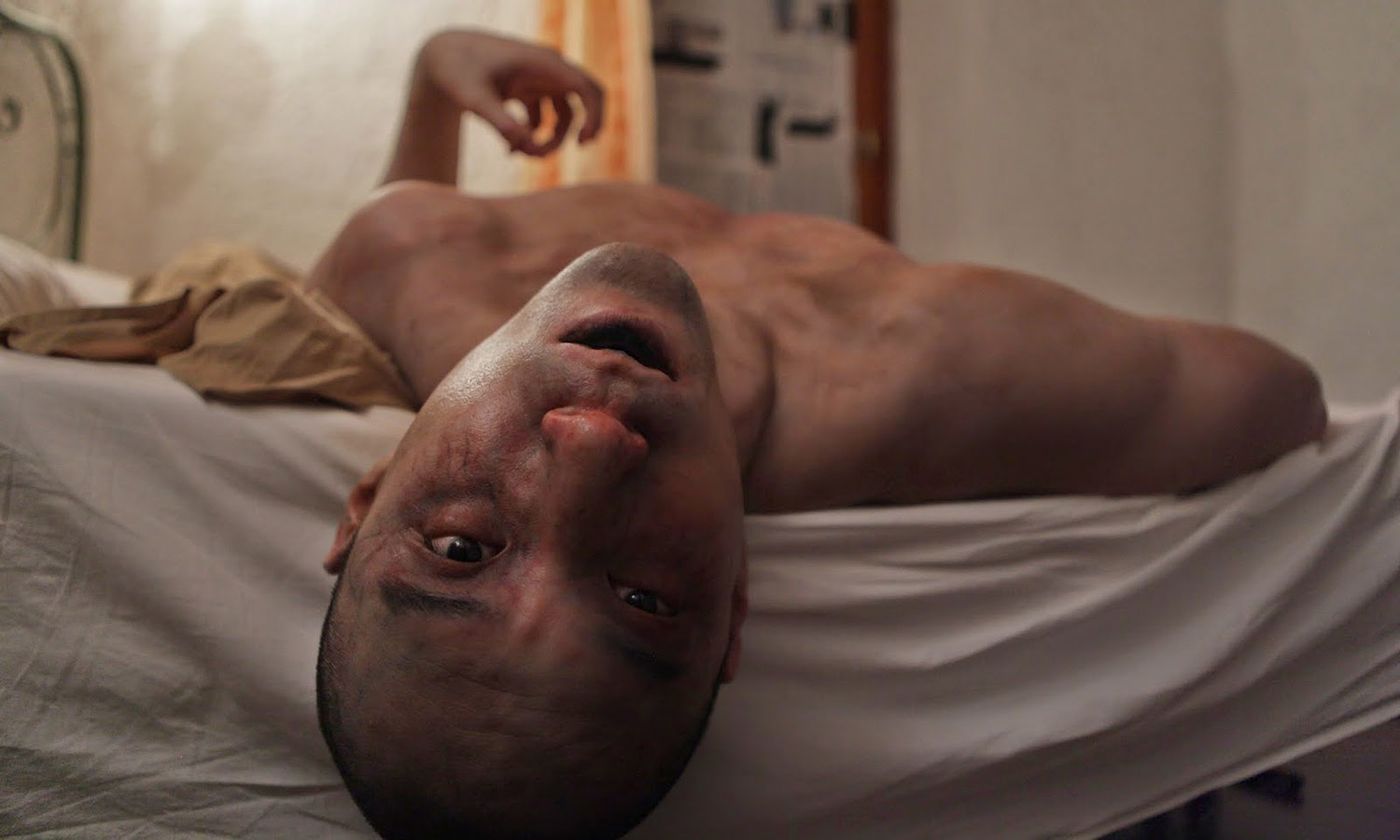 Derek’s feverish contortions in “Afflicted” are disturbing to watch.

We all fear of dying before we have done all that we wish to do. This is how Derek (Derek Lee) feels when he’s diagnosed with an AVM—a potentially lethal tangle of blood vessels in this brain—before he embarks on an around-the-world trip. Ignoring his medical advice, Derek stubbornly continues his travel plans. Accompanying him is his longtime friend, Clif (Clif Prowse), who wants to film Derek’s progress. After an attempted one-night stand in Paris, Derek is found unconscious and bleeding in his bed—and then the symptoms begin. Plagued by pain and contortions, Derek also finds that his skin now peels off in the sunlight, his wounds regenerate, and he has an maddening urge to kill. Shot in found-footage style, the horror of “Afflicted” arrives through human anxieties over infection and the loss of bodily control. 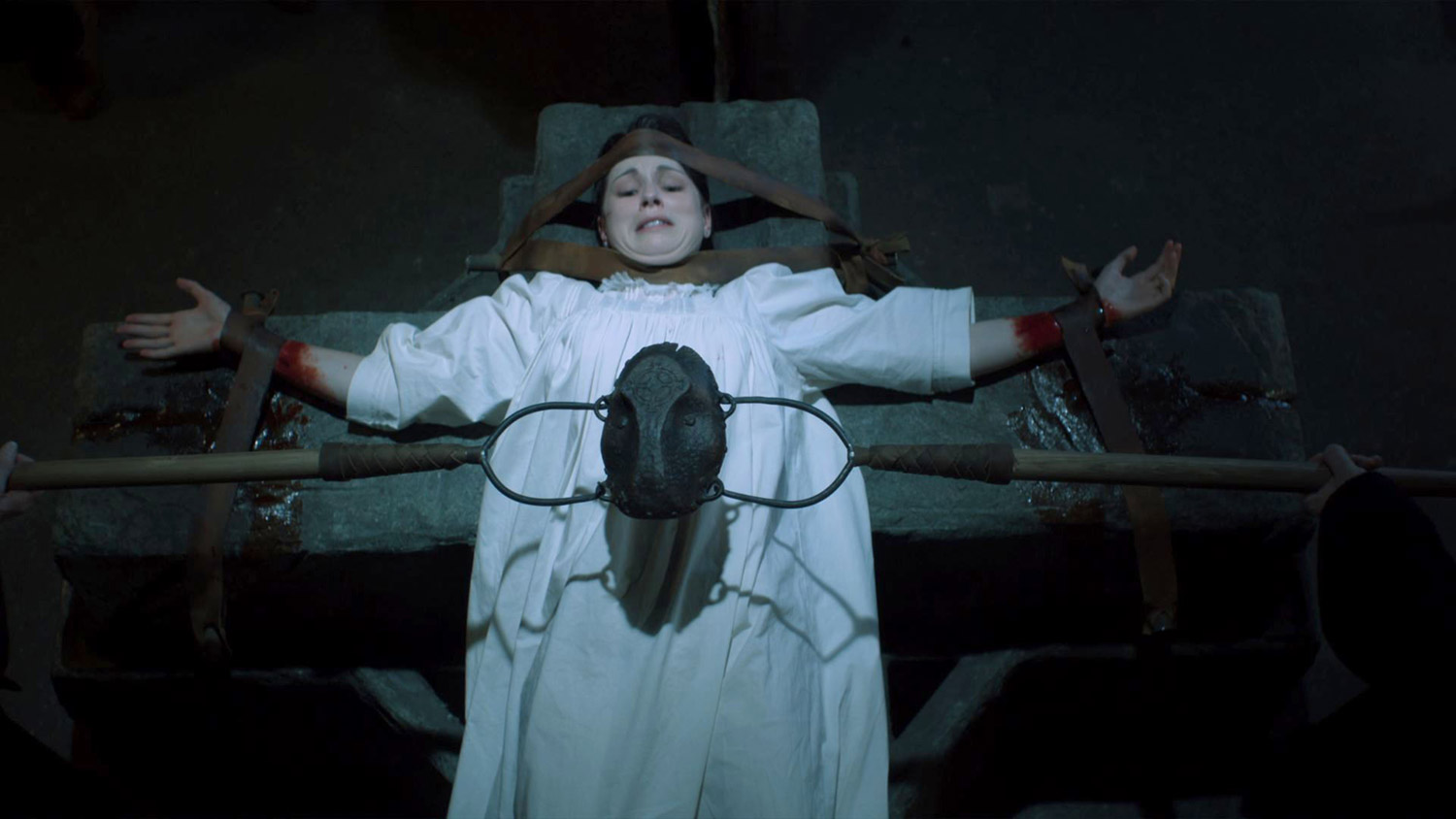 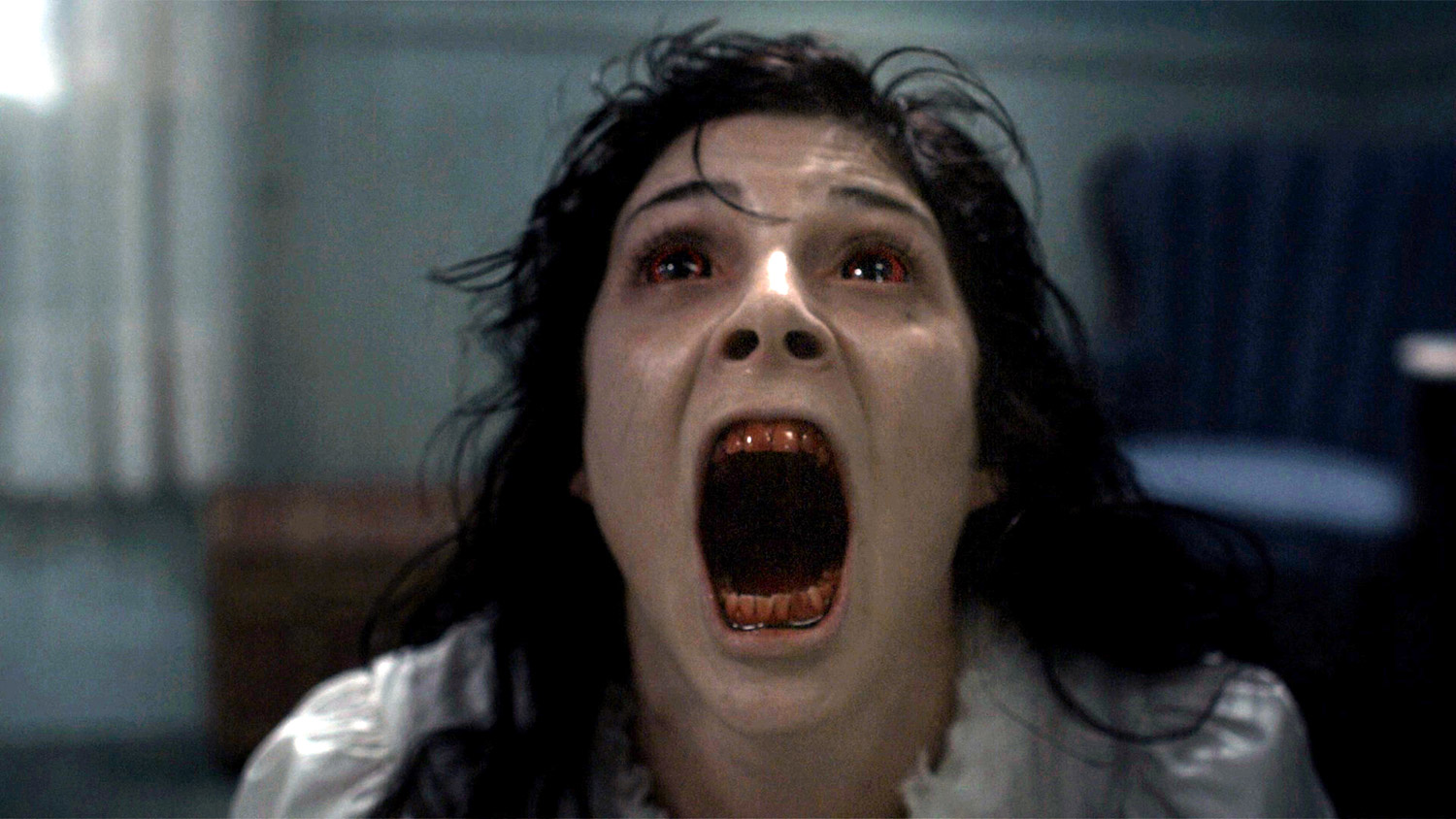 The scenes of ritualistic sacrifice in “The Shrine” are unapologetically horrifying.

Unlike some of the above-mentioned films, “The Shrine” (2010) doesn’t openly confess to any of its Canadian origins. Filmed in Southern Ontario, this movie follows Carmen (Cindy Sampson), an American journalist, as she travels to Poland to gather more information about a village where a number of people have mysteriously disappeared. Her friend Sara (Meghan Heffern) and boyfriend Marcus (Aaron Ashmore) join her in this doomed mission. Upon their arrival, they encounter inhospitable locals, a mysterious fog, and a blood-spewing gargoyle statue. While its avoidance of Canadian associations (for the purpose of appealing to a broader, international viewership, presumably?) may be this film’s biggest national anxiety, “The Shrine” offers a spooky atmosphere and some ultra-gory imagery that will seize the attention of wizened horror fans. 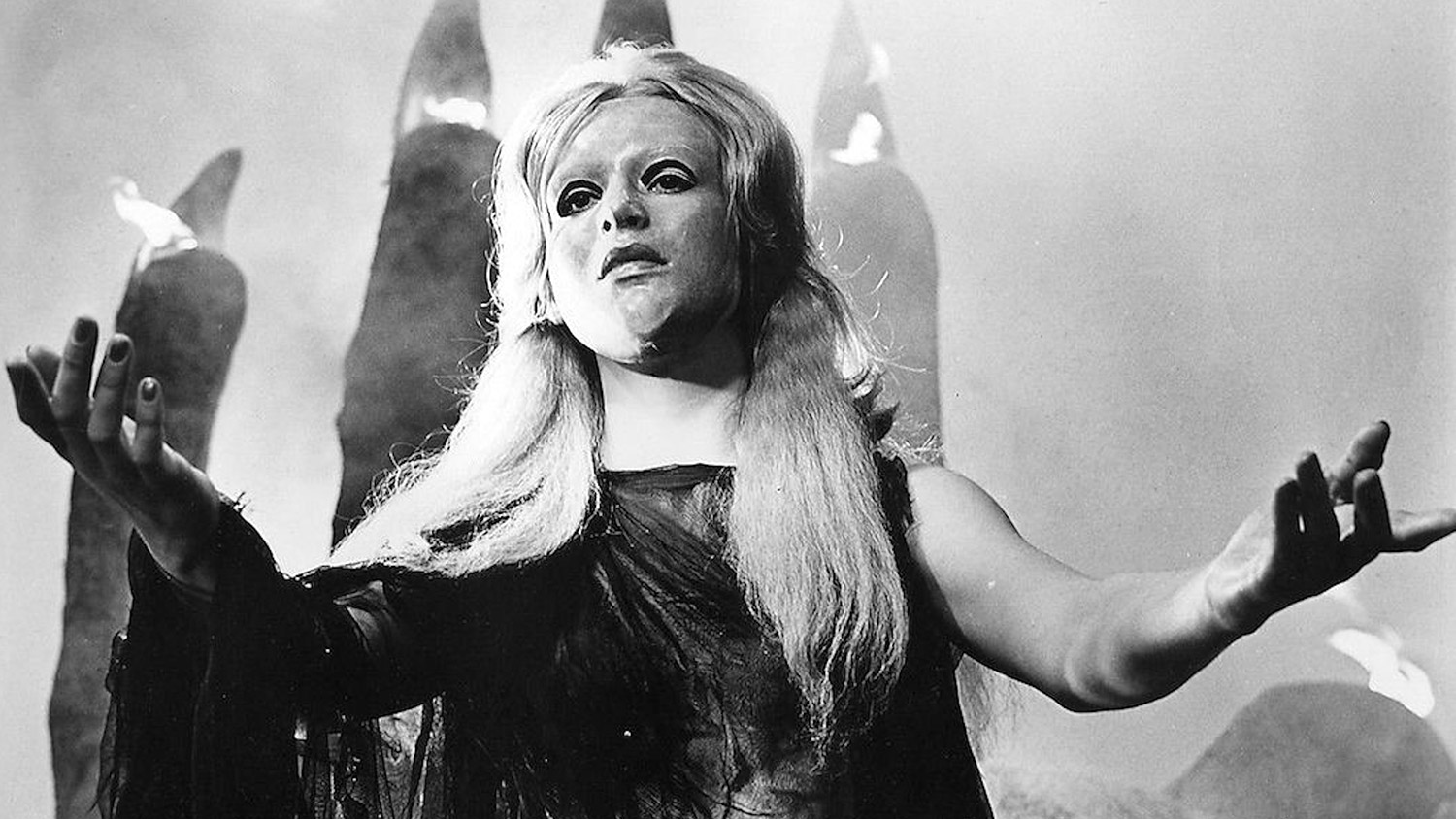 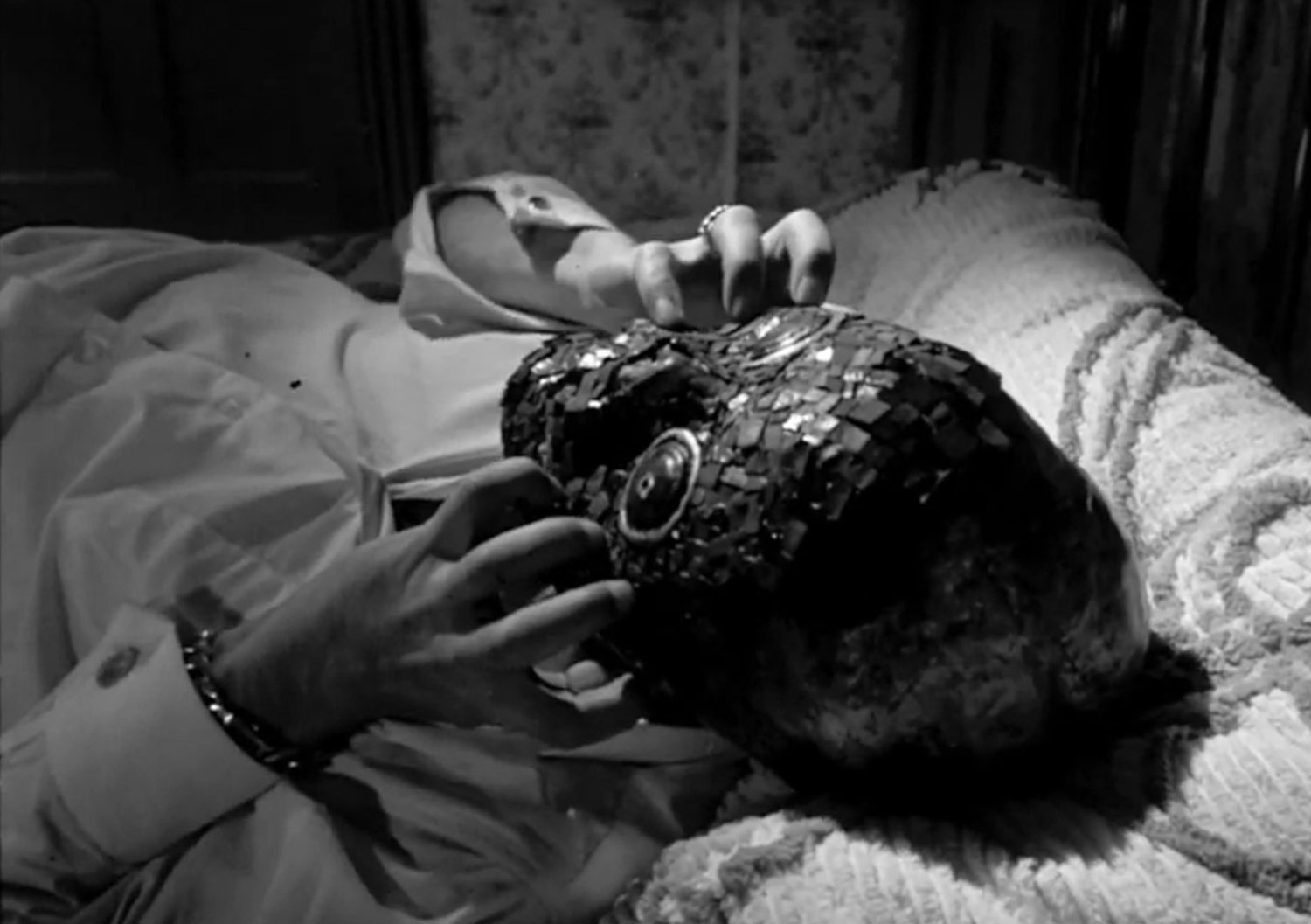 “The Mask” was experimental in the surreal 3D world it created.

Finishing this list is Julian Roffman’s “The Mask” (1961), Canada’s first horror film. The movie centers around a tribal mask that finds it way into the hands of Dr. Allen Barnes (Paul Stevens), a psychiatrist. Upon putting the mask on, Allen is thrown into a disturbing, psychedelic world, surrounded by floating skulls and cloaked occultists overseeing human sacrifices. He soon becomes dangerously obsessed with these experiences, and, naturally, goes mad. All of the mask scenes were enhanced with anaglyphic 3D. Uniquely strange, “The Mask” remains a watch-worthy movie, and a good place to witness the early moments of Canada’s quality brand of anxious and speculative horror cinema.