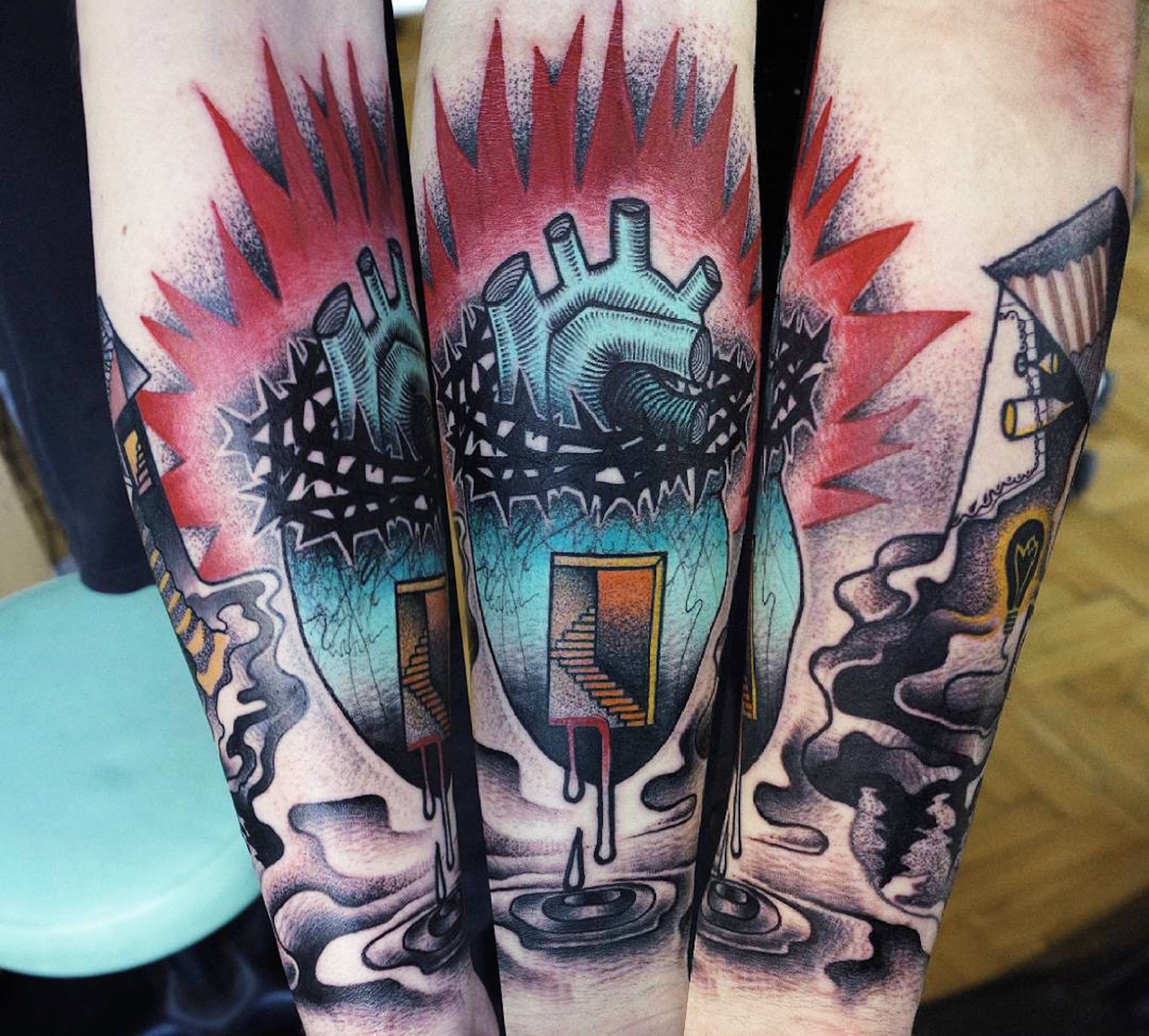 It’s as if the Polish-based creative ┼üukasz Soko┼éowski was destined to be a tattoo artist. He started his career not once, but twice: first as an inexperienced teenager that created some bad ink. After a long break, he returned to the field ready to try again.

The second time Soko┼éowski started to tattoo, it stuckŌĆöhe’s currently a busy artist that creates bold body art, featuring dramatic pieces that are inspired by more than just tattoo culture. Soko┼éowski is fueled by fine art movements of the past as well as Polish graphic design. This results in tattoos┬Āthat fuse portraiture, landscapes, architecture, and geometric designs. Despite these varied influences, Soko┼éowski weaves them together and forms cohesive tattoos that tell enthralling stories. 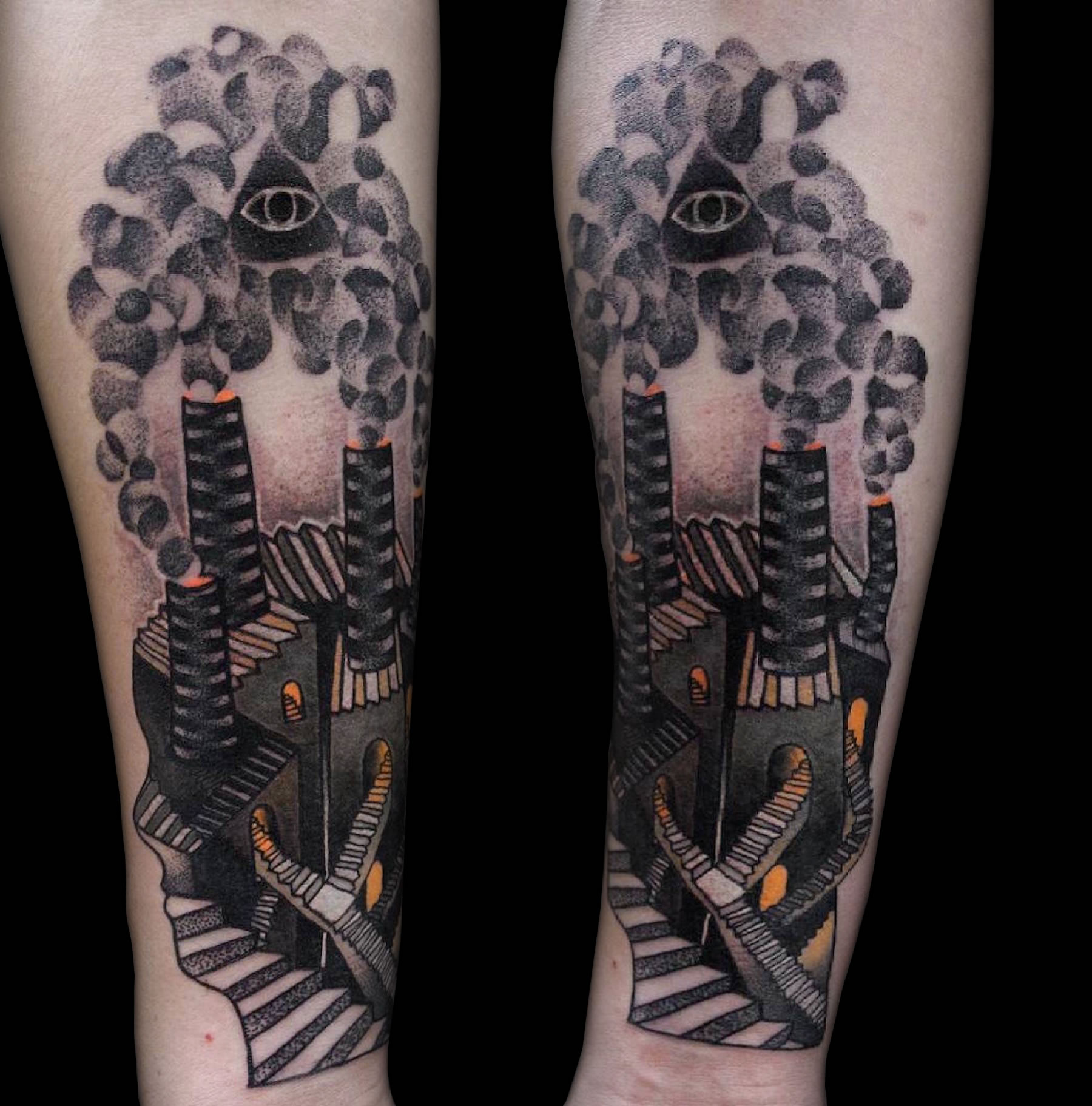 When did you start tattooing?

IŌĆÖve started twice actually. The first time was when I was 17 during high school; I used some really homemade and unprofessional stuff and made really bad tats, taking designs mostly from some early 90ŌĆÖs German motorcycles/tattoos magazinesŌĆöit even sounds scary, and that it was. So I had made the decision to stop hurting people after some 5 or 6 months.

After 10 years of doing other things, my girlfriend gave me the idea to try again because she knew I was trying to tattoo for many years after we had met. So in 2009, I started again, and soon it went from just a hobby to my actual work. 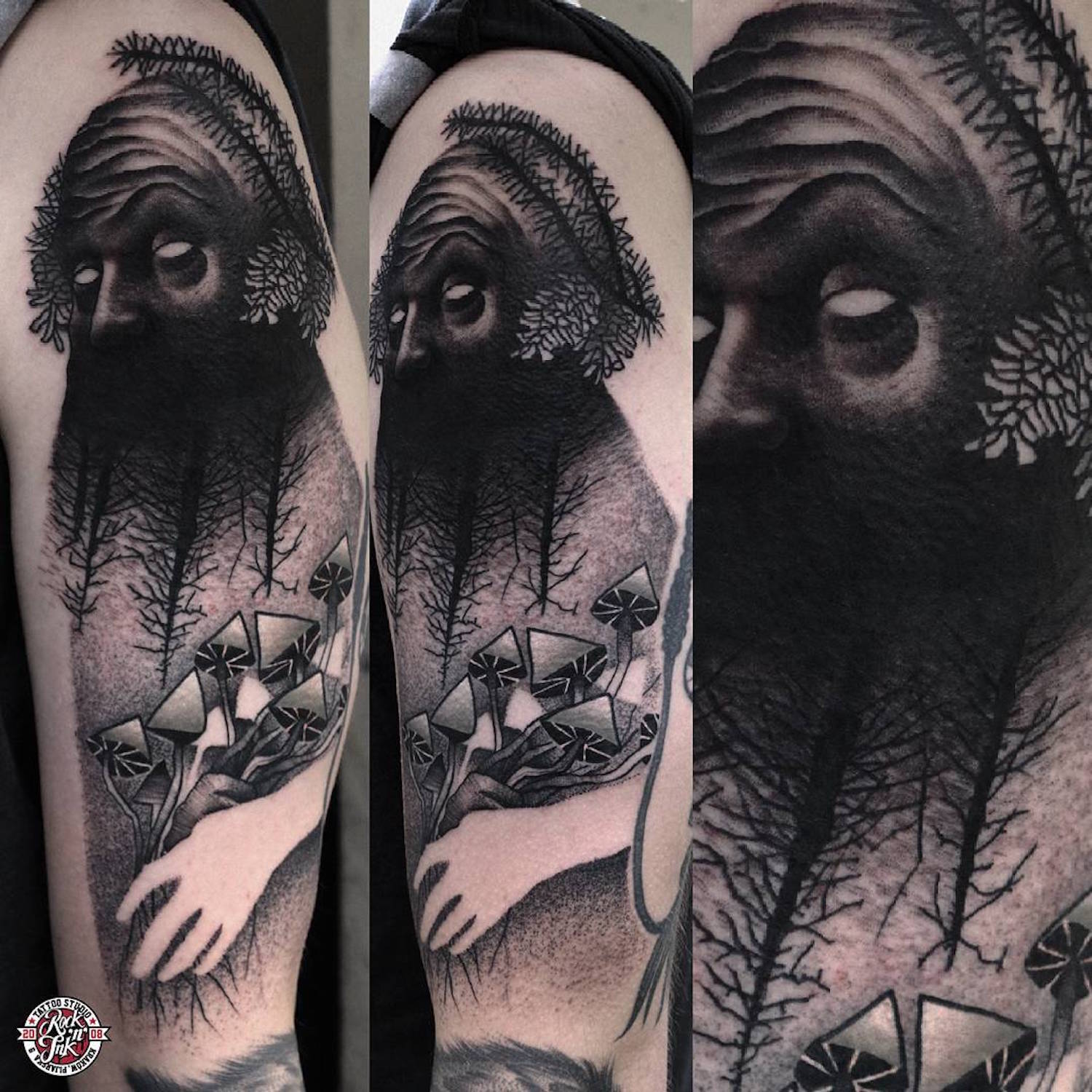 How has your approach to tattooing (technical and artistic) changed since you began working?

It has changed completely. IŌĆÖm more conscious of my technical capabilities and restrictions, and the need to develop my abilities. IŌĆÖm still searching for my graphic form (artistic style), but IŌĆÖm definitely closer to finding it since a year ago. 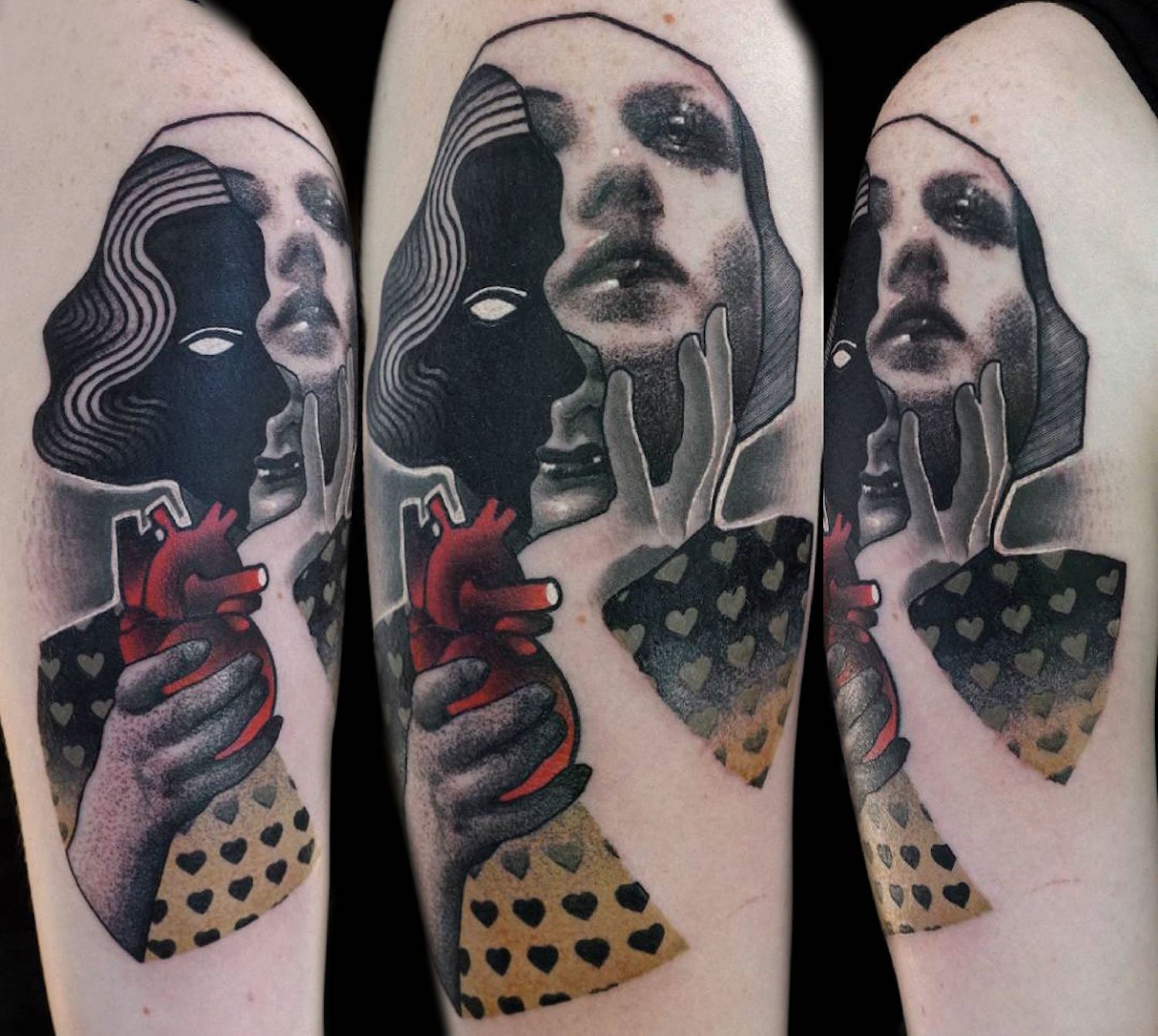 What is your background? Did you ever imagine becoming a tattoo artist?

IŌĆÖve completed art in high school (silkscreen specialty). After that I was studying graphic design. I think both of these activities have influenced me.

The very first memory connected with tattooing is when I was maybe 11 or 12ŌĆöon some holidays, using cheap markers and trying to put the covers of classic LPs of hard rock, DeathŌĆÖs “Leprosy” (for example) on my friendŌĆÖs skin. 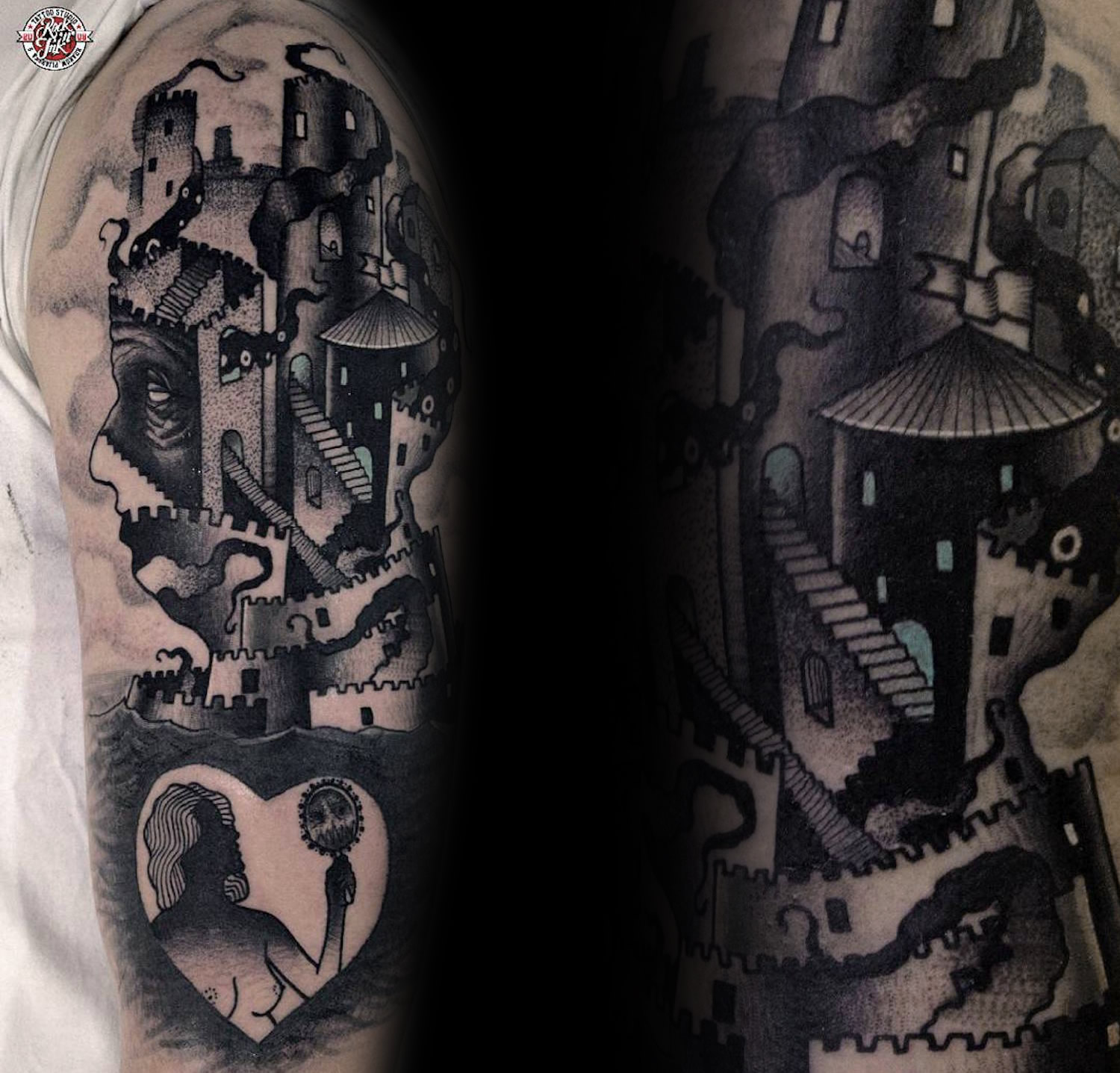 Complex sets of steps within a larger portrait symbolize the intricacies of the human mind.

A majority of your pieces are a fantastical twist on the conventional portrait. What is it about this subject that interests you?

There was a period in the last 2 years that I made lot of them, based on some realistic parts made in dotwork and mixed with some graphic design tricks, but to be honest, IŌĆÖm a little tired of this subject. Because of this, at the moment IŌĆÖm not using realistic elements in my tattoos. 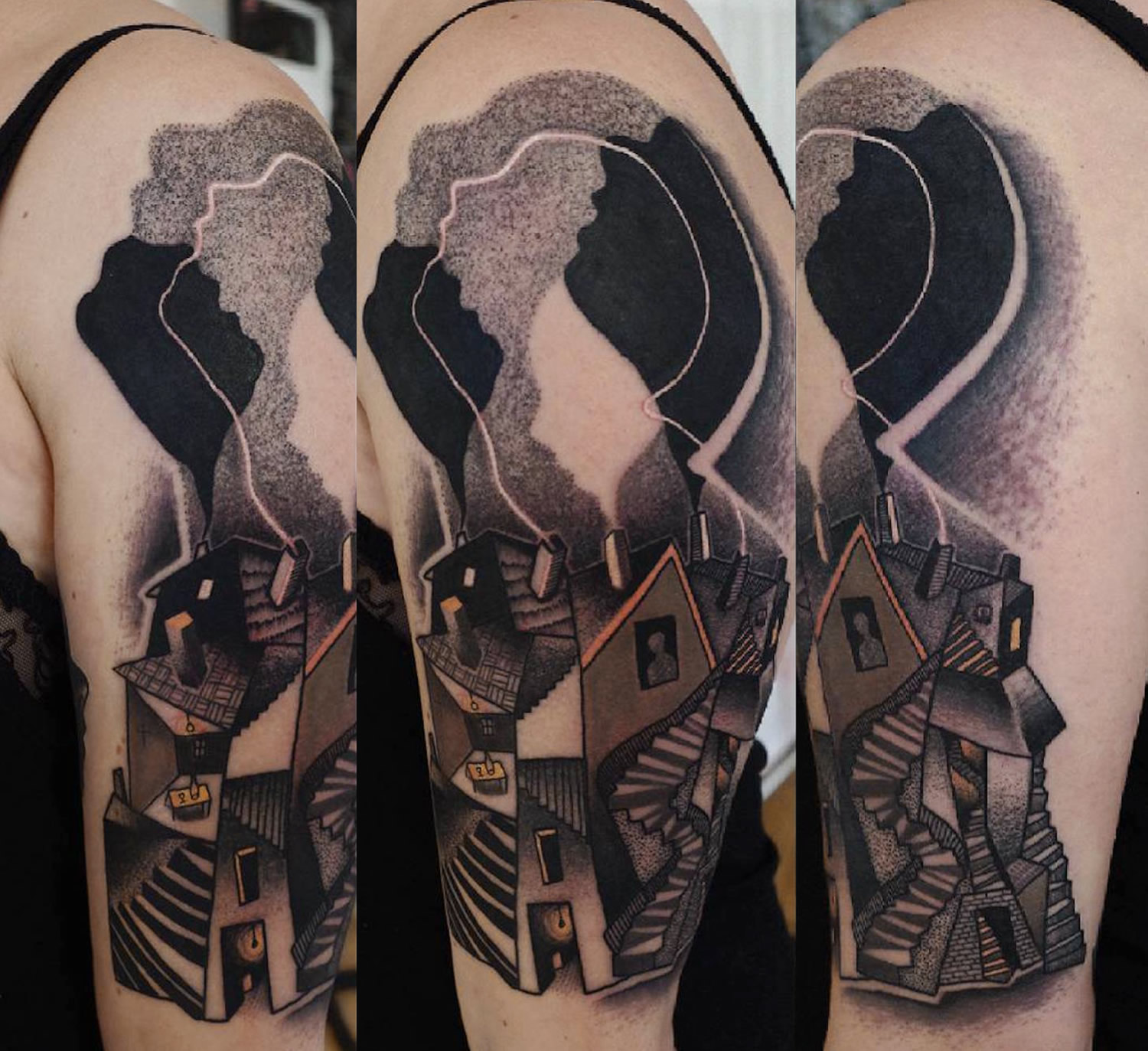 In a surreal twist, the smoke from a chimney forms a human silhouette.

Your work fuses elements of surrealism and cubist abstraction. Who are your artistic influences?

Maybe it will be a surprise to you, but both surrealism and cubism are not my favorites. IŌĆÖm more interested in Hieronymus Bosch, or Dadaism, Expressionism, or artist W┼éadys┼éaw Hasior (a sculptor working with readymades). But the strongest inspiration is a phenomenon called “Polish School of Posters” and accompanying this movement is the Polish (or Eastern) scene of book illustrators: Janusz Stanny, Roman Cie┼ølewicz, Jerzy Treutler, Mieczys┼éaw Wasilewski and many, many more. 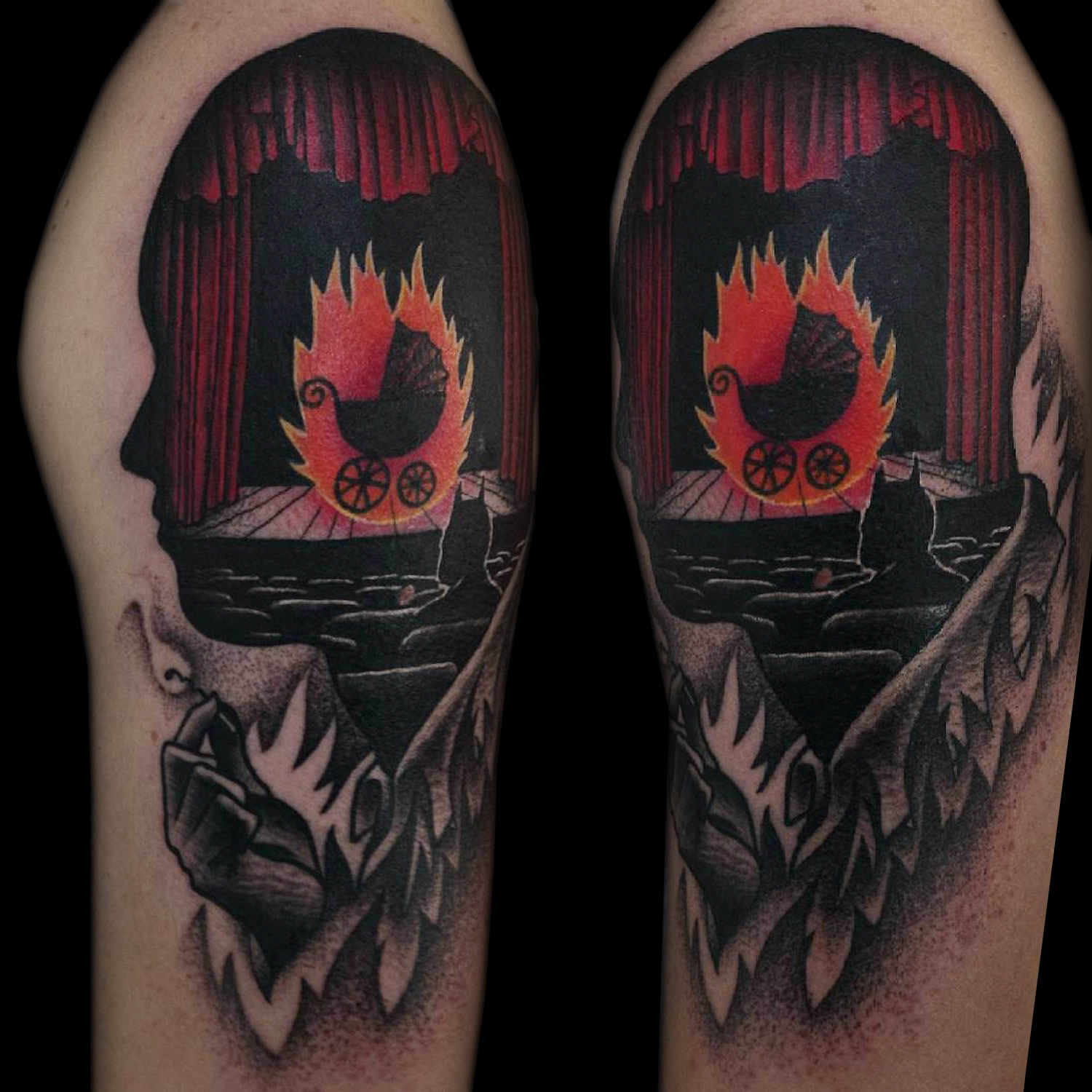 Do you have a tattoo that you dream of inking on someoneŌĆösuch as a specific image or subjectŌĆöbut just havenŌĆÖt had the opportunity yet? If so, what is it?

I donŌĆÖt think so, hmm. I wish to do more larger projects like back pieces or front pieces, but on a design/idea level I donŌĆÖt have any special ideas, maybe because when I make a design that I really like or IŌĆÖm proud of, IŌĆÖm quick to find a customer to tattoo it on. 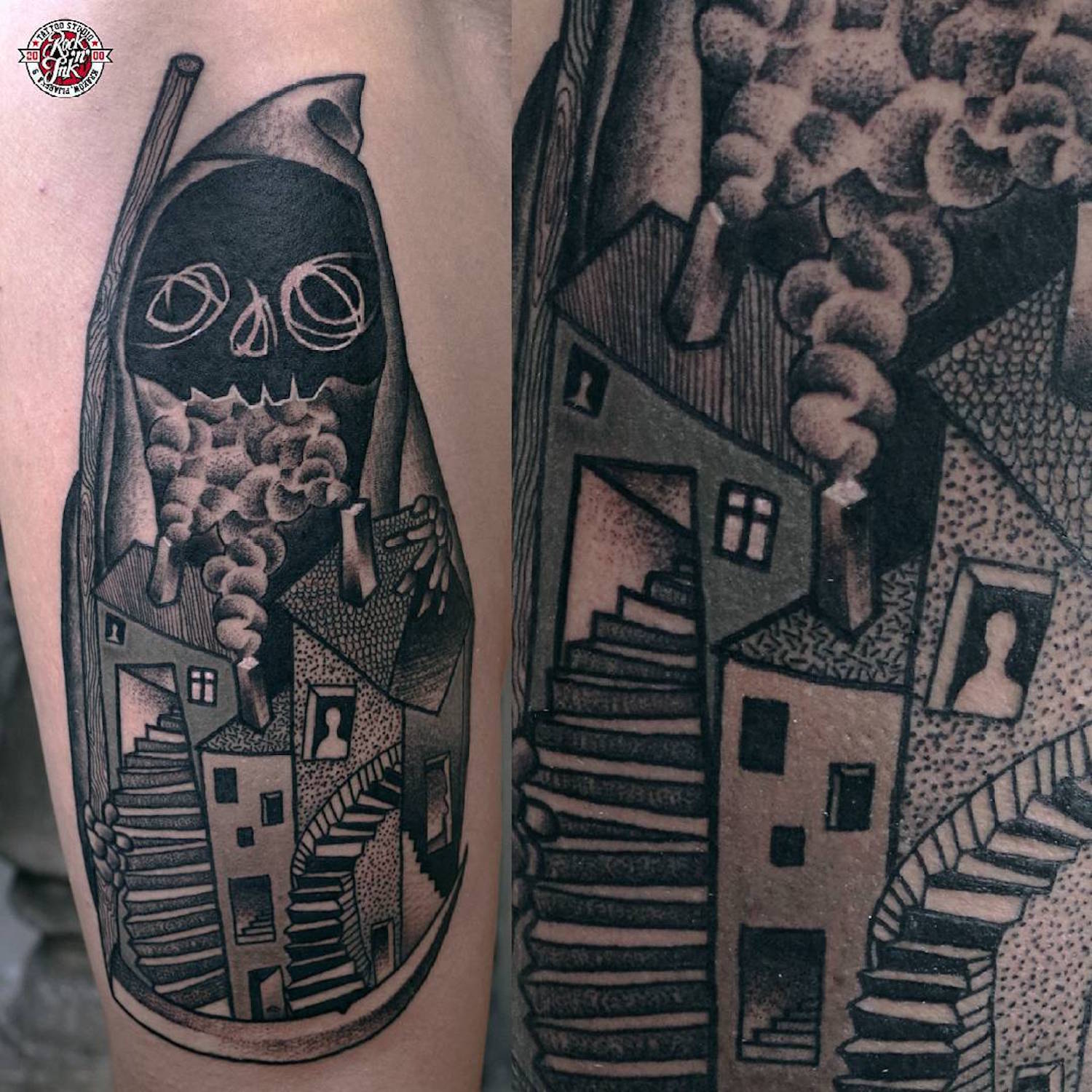 Flattened houses morph into a larger shape that mimics the Grim Reaper.

What is your process when creating a new tattoo for a client? How much of the piece is their vision versus your own?

It works in two waysŌĆö50% of clients are people who just base/take my designs and flashes that I posted on the web from time to time. The second part I ask them to write the subject they want or some keywords to help me design the tattoo. And I always ask my clients to send some of their favorite works that I have made in a last 2 months.