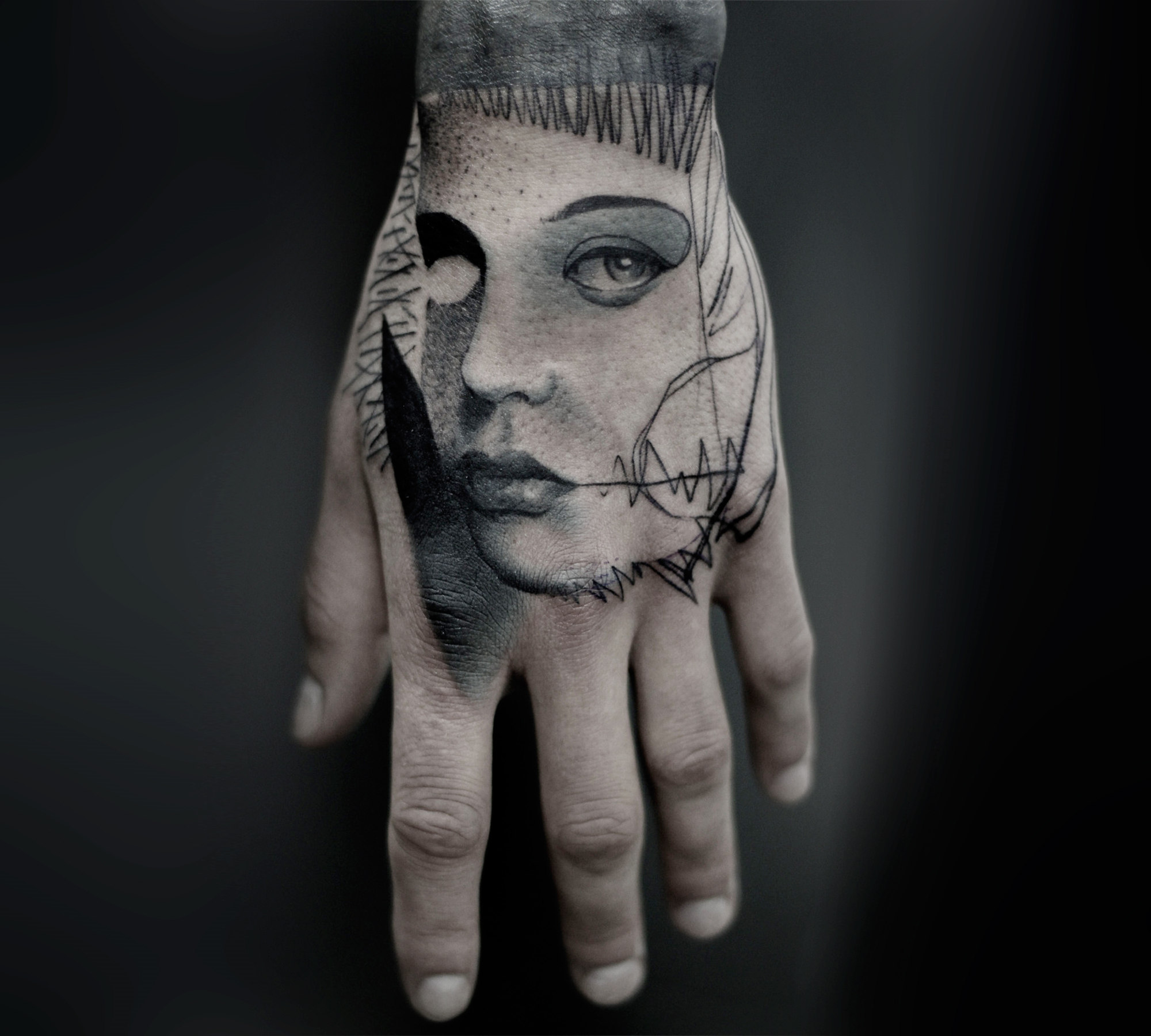 With the soaring popularity of tattoos coupled with increased globalism, the world gets seemingly smaller and smaller‚Äîtattooists from across the world are easily¬Ýinspired by cultures in foreign lands. Likewise, these artists also¬Ýtravel to tattoo shops in different countries and bring their unique style there.

Illusion magazine has been an admirer of the work that comes from Eastern Europe. Places like Turkey, Ukraine, Russia, and Poland are rich with tattooists who practice in a variety of styles. Okan Uckun and Rit Kit are two examples of this. Uckun is known for his surreal combination of blackwork lines and dotwork, while Kit employs a more unusual technique; she dips fresh leaves into tattoo stencil ink and then presses them on her client‚Äôs bodies. Afterwards, she uses that as her visual guide.

These two artists represent the creativity of Eastern European tattooers, but they certainly aren‚Äôt all of them. Check out 10 others making waves.

Above: Ian Shakhmatov’s eerie portraiture represents a compelling departure from his ornamental tattoos. 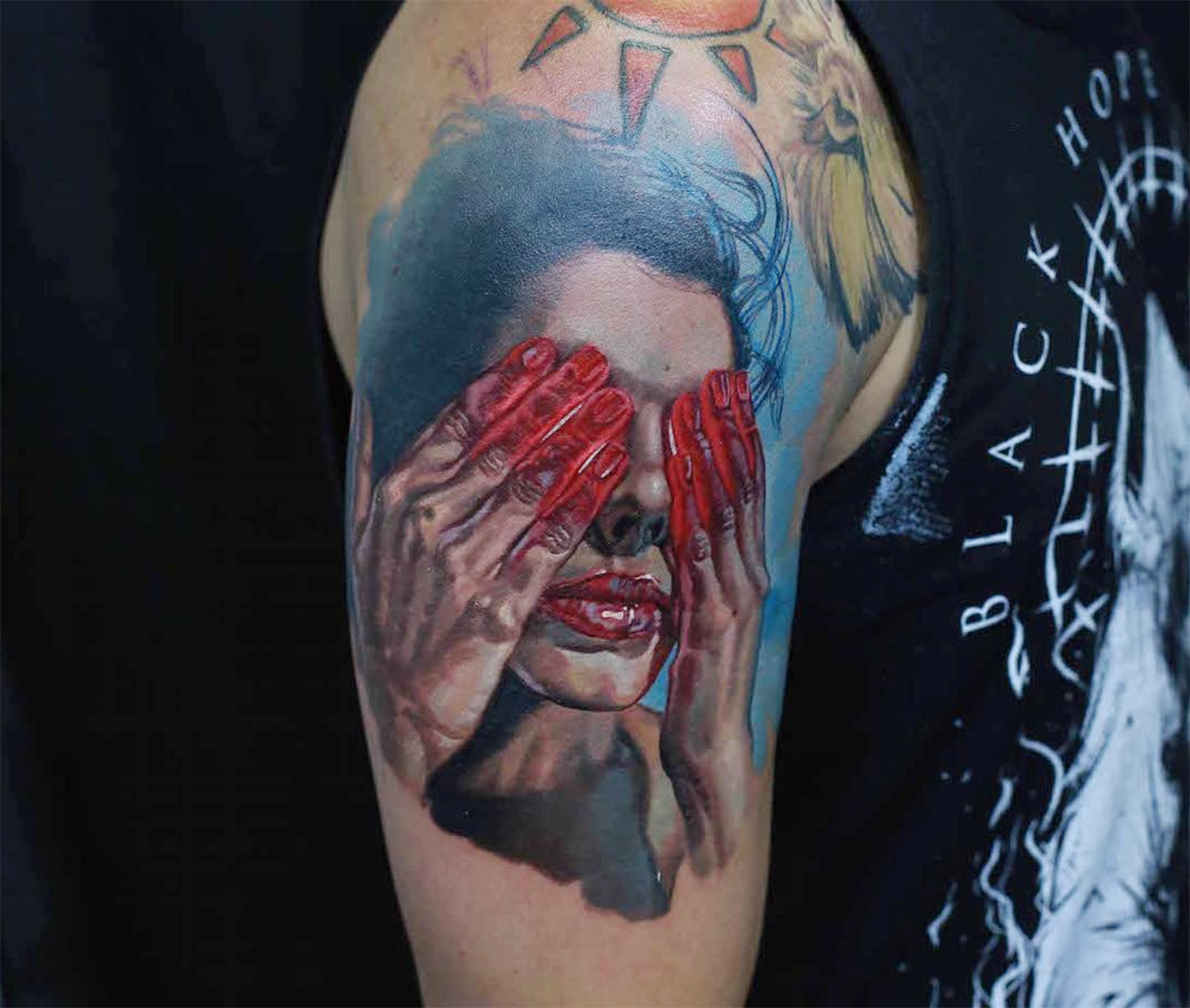 This particular tattoo is based on a painting by fine artist Casey Weldon.

I‚Äôve admired the work of Denis Sivak for the last few years and I‚Äôm continually impressed with his hyperrealistic, pop culture-inspired tattoos. Born in the Ukraine and now based in New York, Sivak has honed his craft to make ink look like rich oil paintings. His love for this style came from fellow tattoo artist Robert Hernandez. “His works are not only made without flaws, they convey the mood, emotions,” Sivak told Skin Artists. Adding,¬Ý“Tattoos in photo-realistic style are my favorite, in this style you can grow indefinitely.” 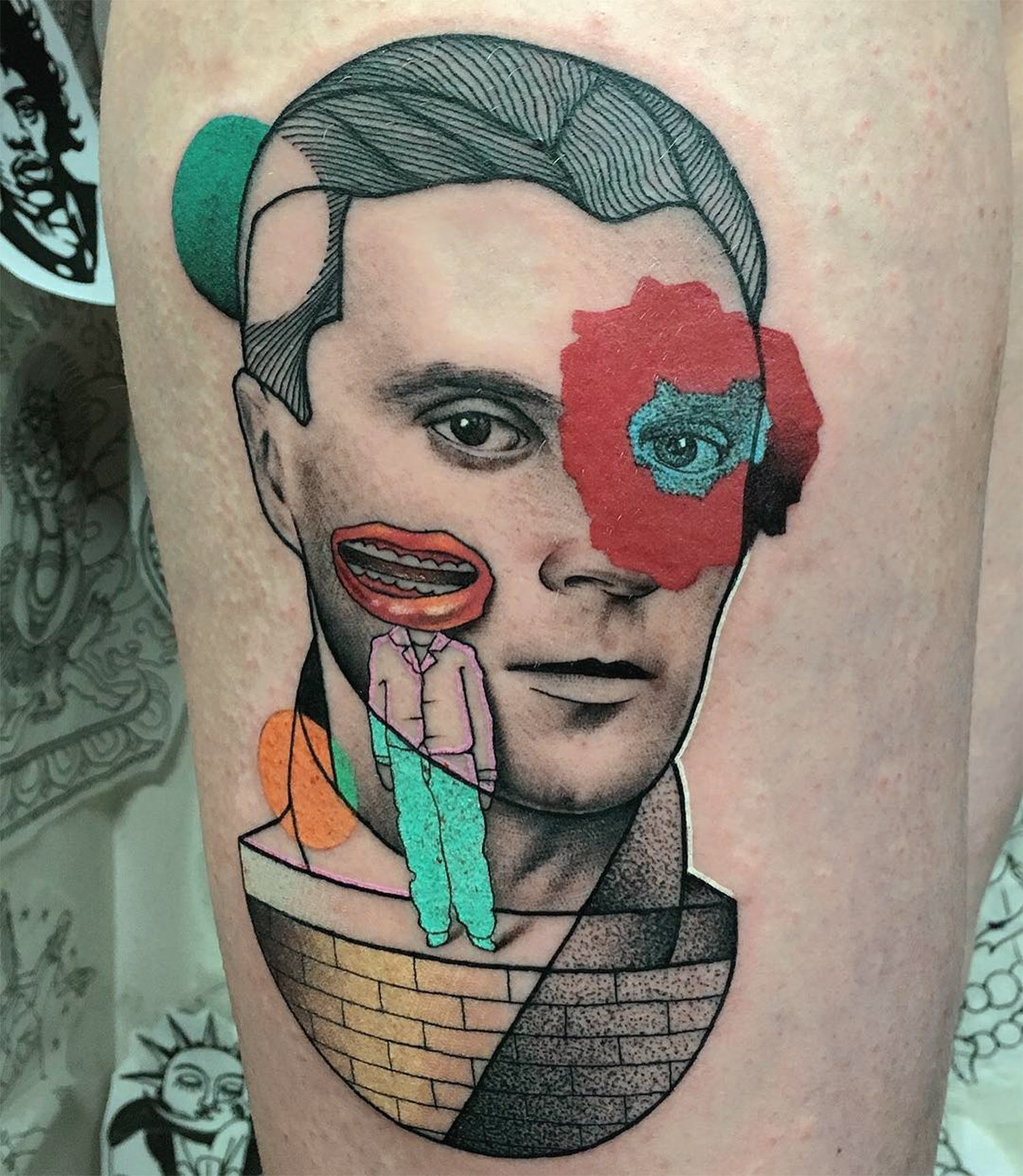 Influenced by elements of cubism and surrealism, Wroclaw, Poland-based Mariusz Trubisz infuses contemporary neon color¬Ýinto his surreal portraiture. In one of his newest pieces, Trubisz has paid homage to legendary musician David Byrne. Like Byrne’s experimental tunes, the tattoo features a variety of shapes and artistic approaches, all in one fractured composition. These decisions aren’t arbitrary‚Äîthey¬Ýrepresent facets of Byrne’s career. The red splotch, for instance, over the tattoo‚Äôs right eye is reminiscent of the pixelated faces on the Talking Head‚Äôs album, ‚ÄúRemain in Light.‚Äù 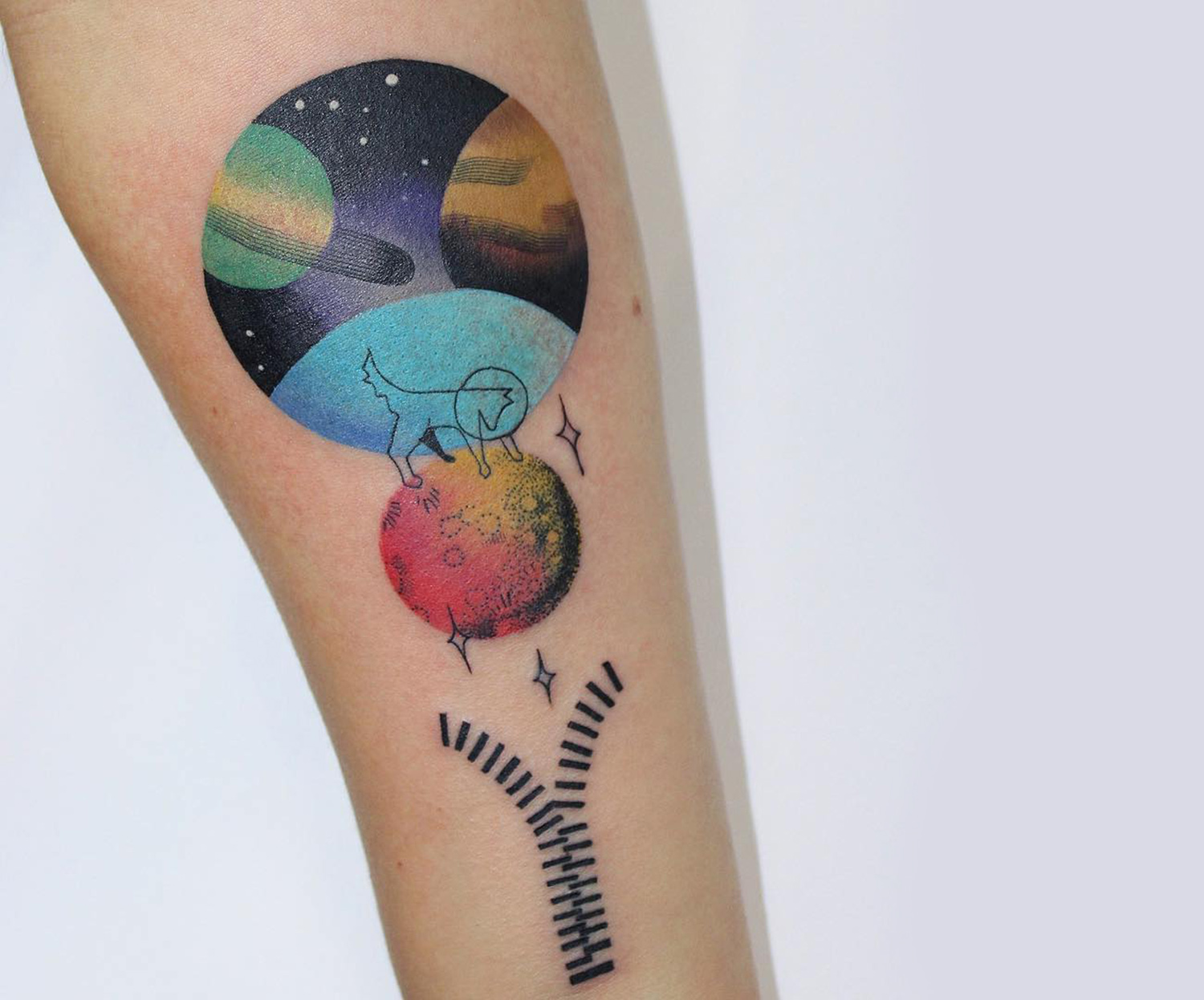 Some of the image’s most important elements are drawn with fine lines.

Calling her style ‚Äúexperimental,‚Äù Anya Lilya uses cotton-candy colors in her vibrant body art. They feature little in the way of outlines. Instead, the filled-in shapes build form and define the images. Lilya has a very tightly-controlled watercolor style, and you can see its influence¬Ýas the wolf sits on the moon. Within each planet are hues that bleed into one another like the wet-on-wet technique you often see in a watercolor painting. 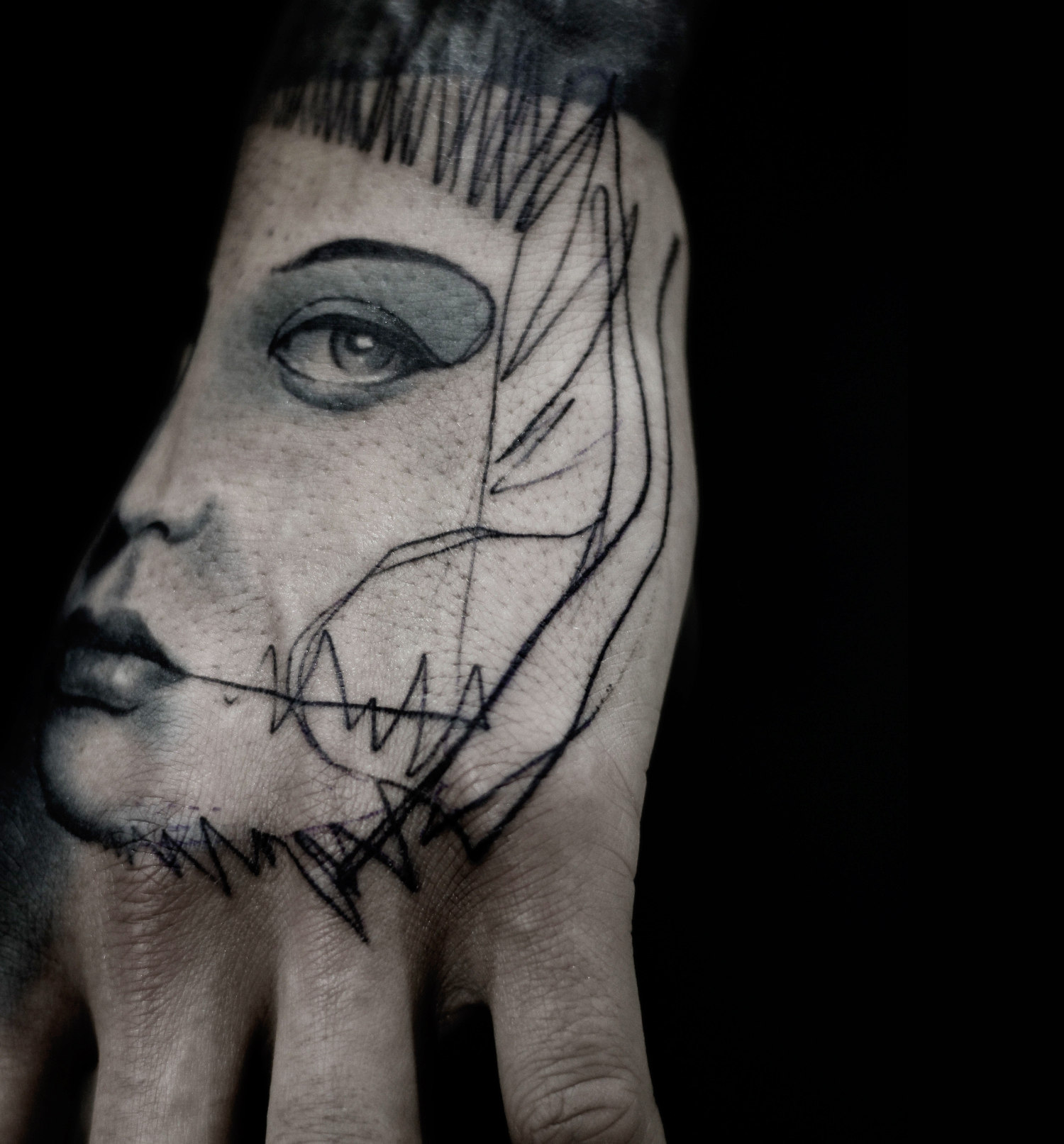 Shakhmatov has been exploring various tattoo styles since his start in the field in 2013.

Based in Moscow, Russia, Ian Shakhmatov created this piece as¬Ýa sketch. The abstract piece of flash found its home on client Danilovic Oleg‚Äôs hand, offering both an eerie way to greet someone, as well as a departure from Shakhmatov‚Äôs regular portfolio. Much of his work features some sort of geometric elements, but as time has gone on, he‚Äôs experimented with subject matter: geometric patterns, mandalas, and double exposure-style imagery. This tattoo is one of a series of ink that showcases energetic lines fused with snippets of realism. 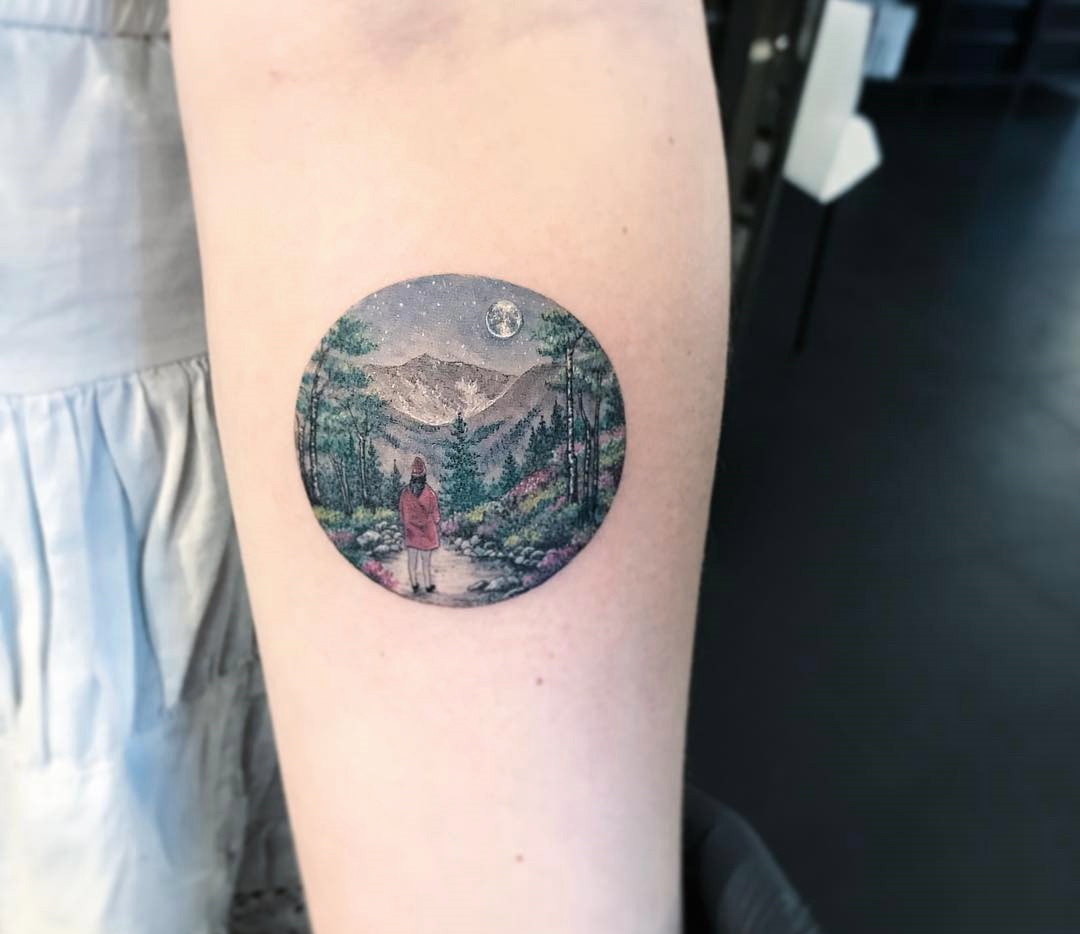 Eva Krbdk inks small stories on the skin‚Äîbut visually, they make a big and fascinating impact.

Known for her miniature tattoo scenes, Turkish artist Eva Krbdk creates surreal body art in small circles. The fine lines recall vintage lithograph illustrations, and they often depict surreal vignettes that tell one snippet of a story. To produce work this fine requires ‚Äúusing a machine designed for permanent makeup.‚Äù Afterwards, to ensure a correct healing process, Krbdk asks her clients to check in so that she can see how the tattoo looks. 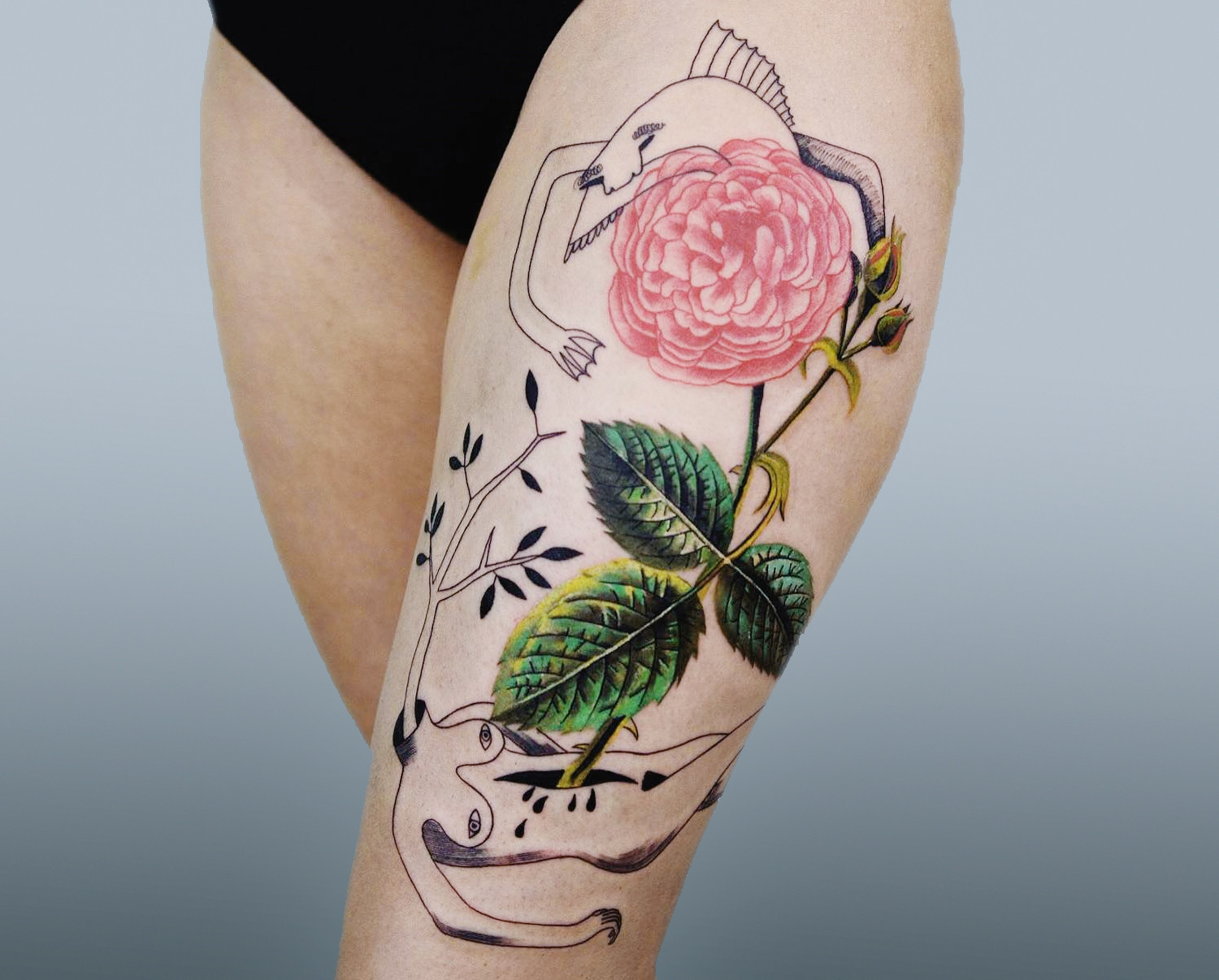 Simple line drawings amusingly interact with a realistic rose, symbolizing reality as it fuses with imagination.

When I profiled Timur Lysenko last year, I noted that his constantly evolving style was thanks to his willingness to experiment with new techniques. Since then, the Polish tattoo artist has maintained his commitment to chaotic line work and glitchy, pixelated pieces. Despite his momentary stagnancy, the body art continues to feel fresh because of his varied influences. Plus, Lysenko is always on the lookout for inspiration. ‚ÄúAll my ideas, elements, and motives which I can use,‚Äù he explained. ‚ÄúI save [all of them] in my laptop. I have a lot of folders [that contain ideas and elements]‚Äîe.g. roses, plants, cats, abstracts … When I don‚Äôt have [any] idea, I look for inspiration in my folders.‚Äù 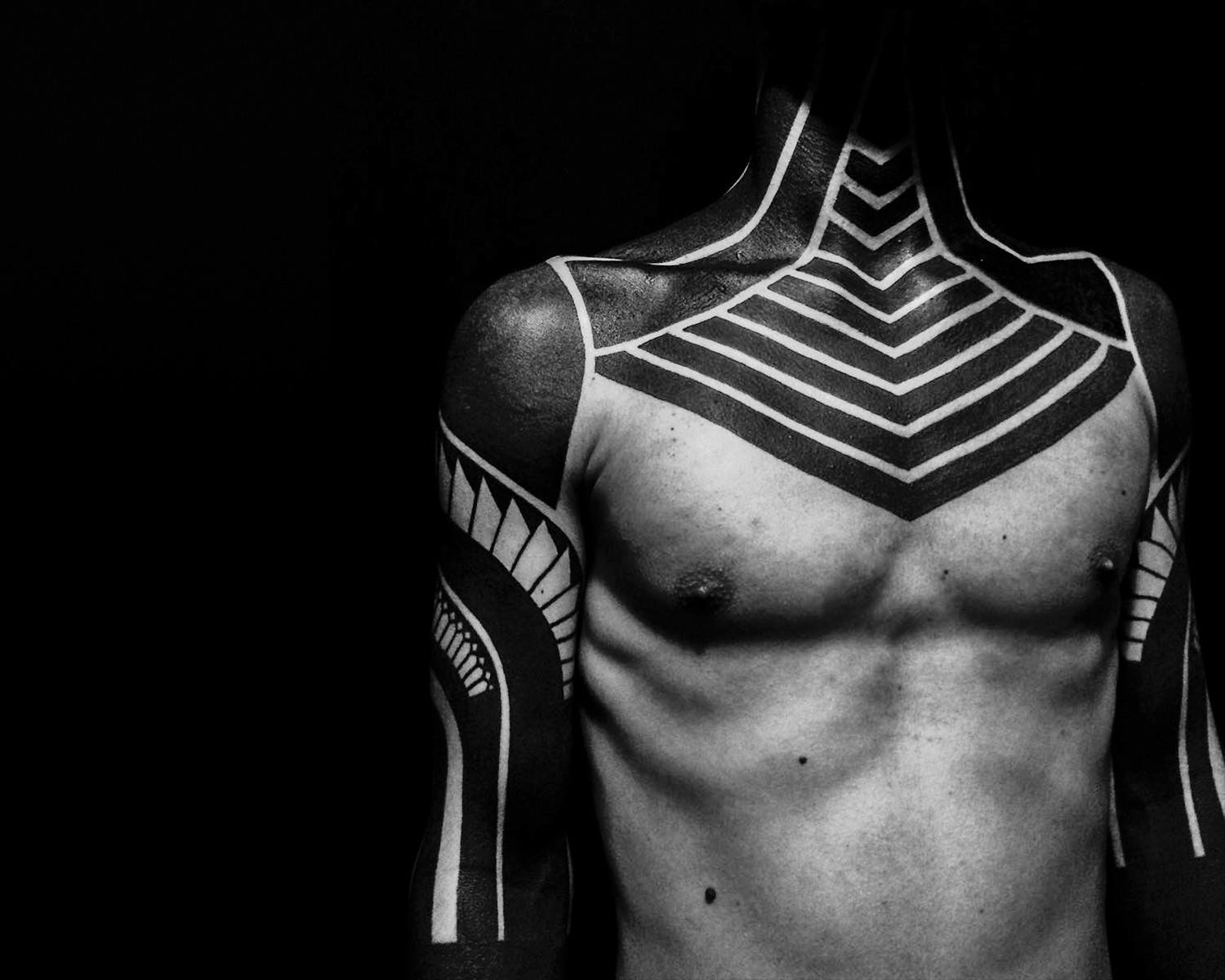 Symmetry is seen as beautiful on the human body.

Inspired by sacred geometry, Alex Arnautov decorates the body with shapes that pay homage to the “proportion and harmony of the different plants and biological structures.” In an interview with Inked, he explained, “I enjoy constructing exact compositions and symmetry.” Many of his tattoos feature intricate dotwork mandalas, but it‚Äôs fully wrapped piece like this one that command our presence‚Äîwhich turns the human body into an actual work of art. The negative space creates its own curves and redraws his client‚Äôs form. Our eye can‚Äôt help but travel along the new paths made from the blackout ink. 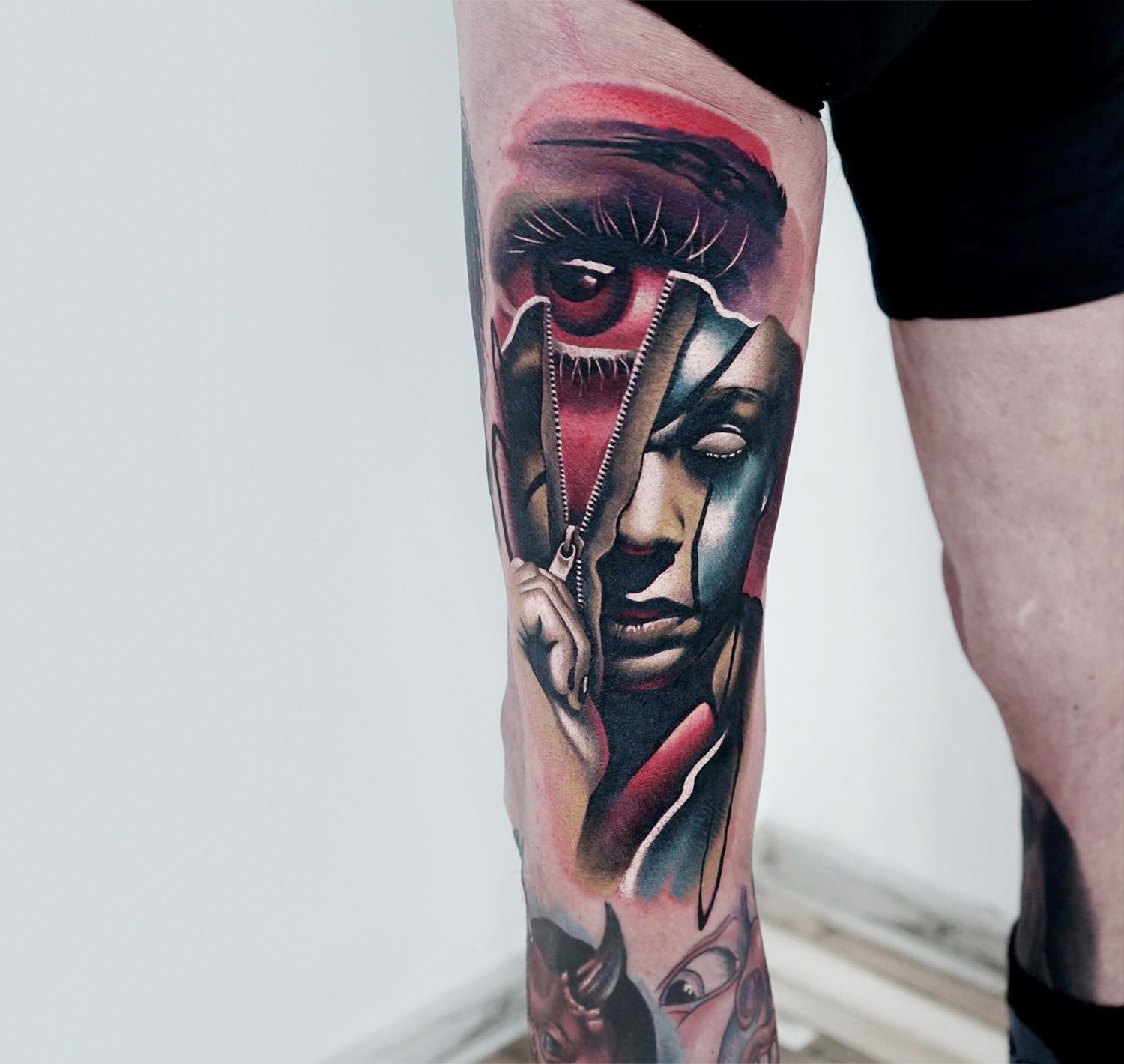 Moldavian artist Alex ‚ÄúAD‚Äù Pancho is known for striking, realistic works done in both blackwork as well as color. While many artists specialize in just one approach, it‚Äôs clear that Pancho has the ability to be a jack-of-all-trades when it comes to tattooing. This piece, he says, was inked¬Ýon a 69-year-old man at the Arbuz Tattoo Studio in Wroclaw, Poland. It’s part of the man’s horror leg, which is a fitting subject for Pancho, who has regularly tattooed dark art subjects before. 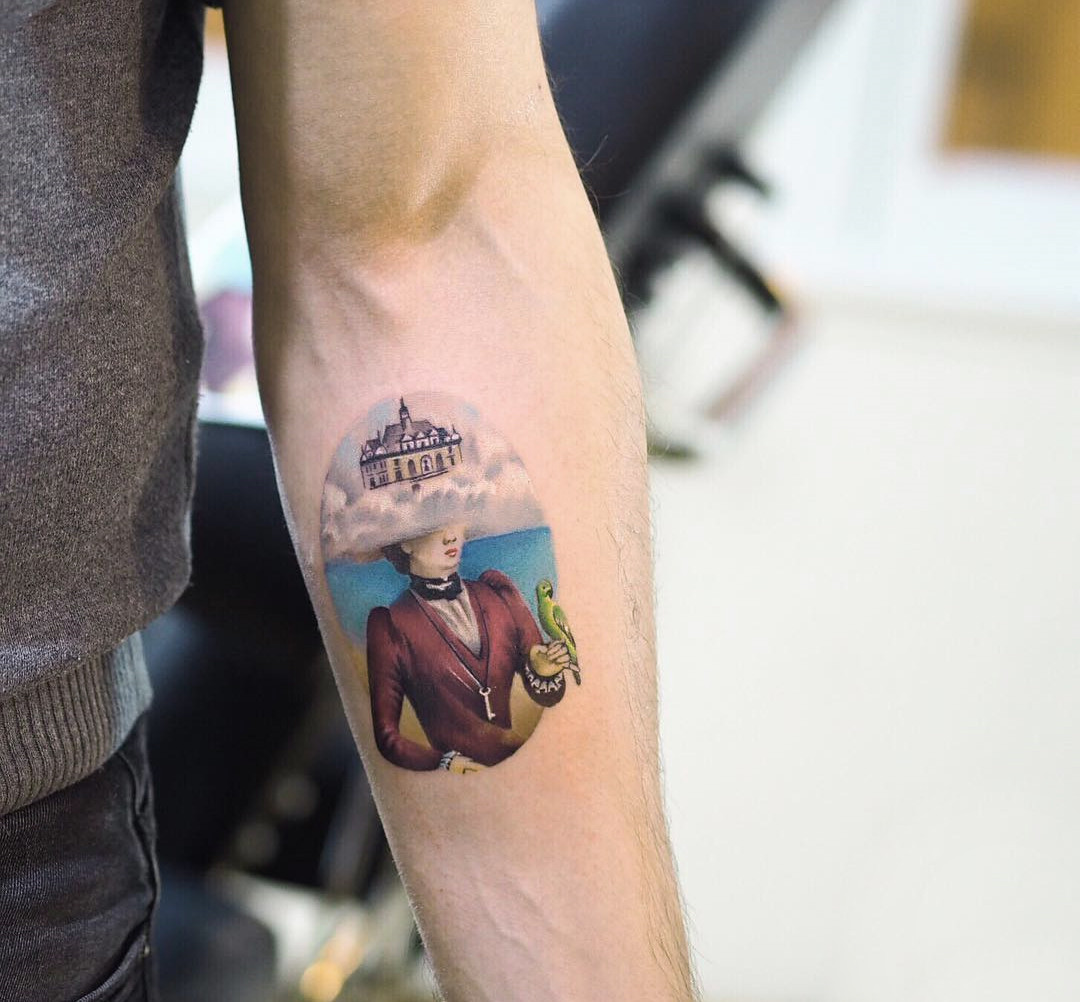 Based in Istanbul, Jefree‚Äôs tattoo portfolio consists of imagery from other sculptors, painters, and television shows. He puts a¬Ýrealistic spin on these sources and places¬Ýthem within the context of small shapes with crisp, clean lines‚Äînot dissimilar to Eva Krbdk‚Äôs approach. This piece pays homage to artist Christian Schloe‚Äôs digital work, taking it from the screen¬Ýand putting it on the skin. 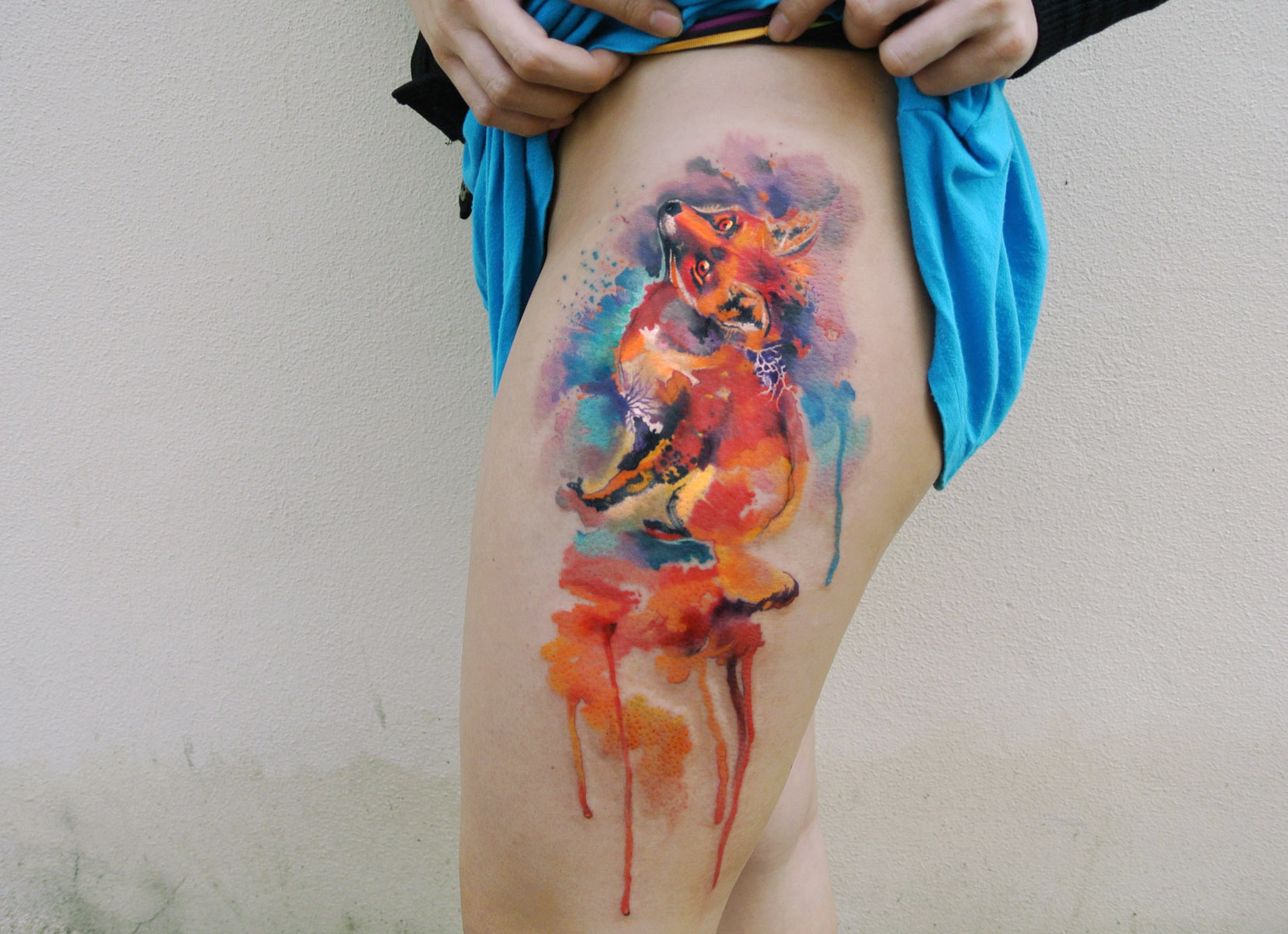 This tattoo was custom-created for the client.

Ondrej Konupcik, better known as simply Ondrash, gained notoriety with his vibrant watercolor approach. With brushstrokes and splatters, he captures the carefree fluidity of the medium. To create his works, he draws directly on a client‚Äôs skin, making each piece truly tailor-made. After it was reported that Ondrash has a two-year waiting list of clients, his popularity has continued to grow. But for those who don‚Äôt want to wait‚Äîor endure the pain of a needle‚Äîthey‚Äôre in luck; Ondrash has started to create large, abstract paintings that he sells online.