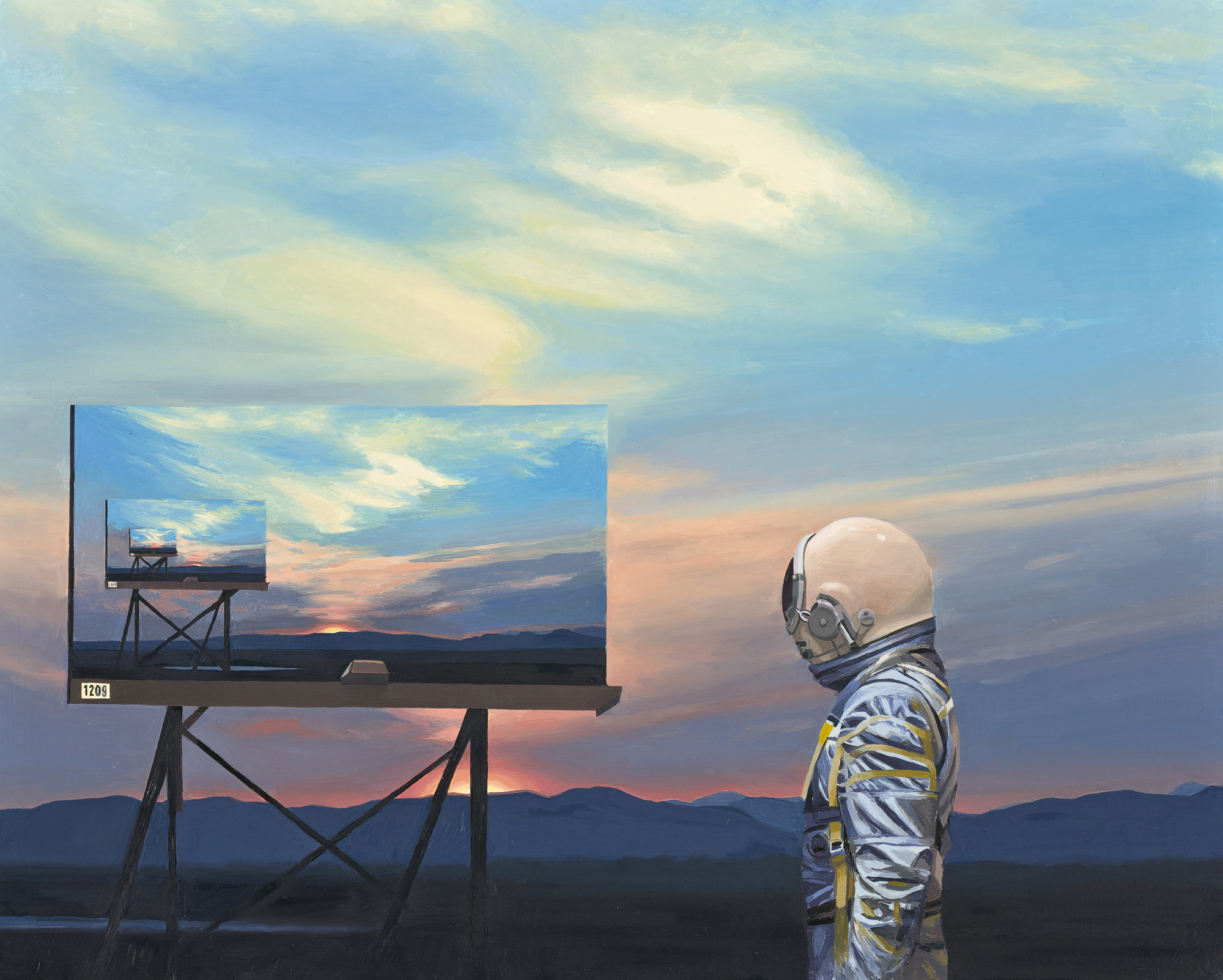 As a child, Scott Listfield was promised a future filled with flying cars and robot companions. When those never materialized, he started creating art that captured his sense of alienation from the modern world.

His works often center around a featureless astronaut exploring a world filled with symbols of modern day life: McDonald’s signs, vintage cars, nuclear power plants. Sometimes funny, sometimes melancholy, Listfield’s work speaks to anyone who has felt at odds with popular culture or confused by the state of current affairs. Or anyone who just really likes astronauts.

Above: Most of Listfield’s recent work follows a faceless astronaut exploring a fictional 21st century.

Tell us a little about your fascination with outer space and/or astronauts … and/or dinosaurs.

Well, the first thing I can remember wanting to grow up to be, back when I was a kid, was an astronaut. That particular ambition faded over the years, probably having something to do with my track record of getting nauseous on even modest carnival rides. But I still grew up watching a ton of cartoons, TV shows, and movies which took place in Space. As a child of the 80s, I assumed I’d grow up into a future filled with flying cars, personal jetpacks, robot best friends, and weekend homes on the moon. Instead I ended up spending early adulthood in a tiny studio apartment, reheating Ramen noodles on a hotplate, taking the bus to work, and watching telenovelas in the local laundromat. It was around this time that I started thinking about making paintings about the world around me, which I felt somewhat alienated and removed from. I wanted to have a protagonist appear in each one. By chance, I watched “2001: A Space Odyssey” for the first time, and it immediately struck me that it was the astronaut from the fictional 21st century that I wanted to have roaming around in my paintings of the actual 21st century.

Also, I like dinosaurs. So I paint them sometimes. 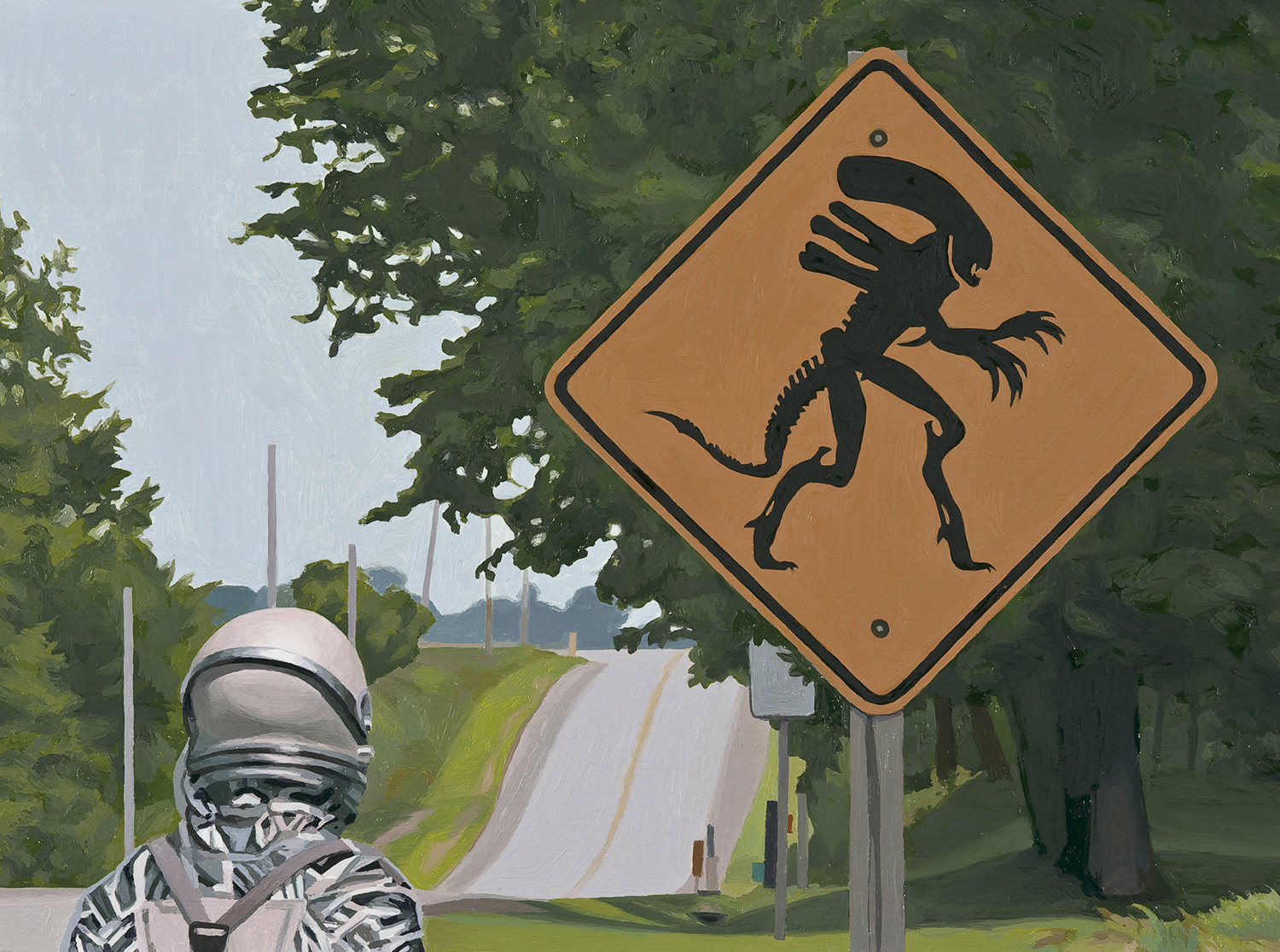 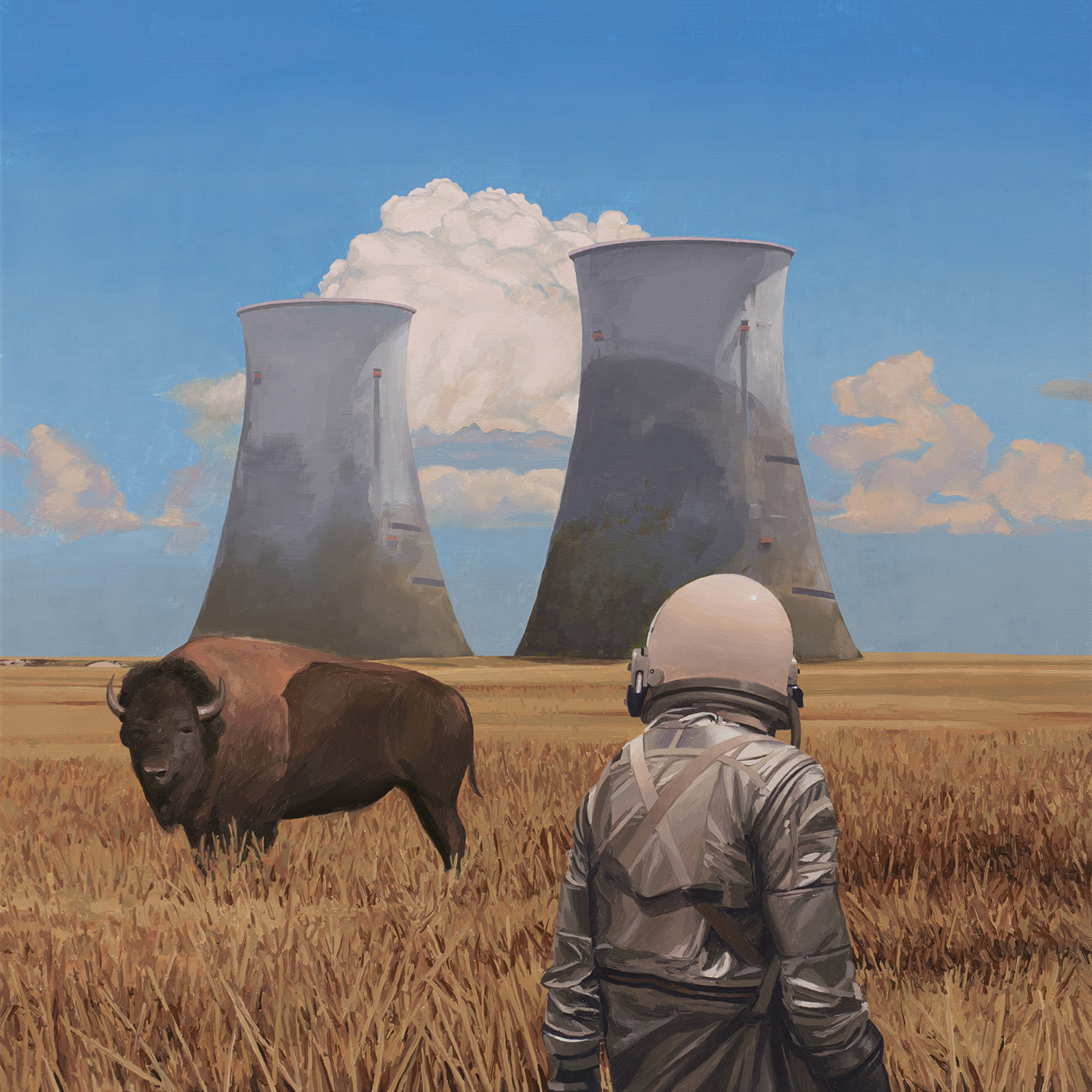 The anonymous astronaut often conveys the disconnect Listfield feels from the modern world.

What kinds of emotions or thoughts do you want your work to evoke?

This is an artsy fartsy answer, but I prefer to let people looking at my work respond to it however they want to. I mean, some of my paintings I deliberately try to make a bit funny, and some I try to make more somber, and some I keep the emotional tone a little more abstract. But if someone comes up to me (or, more likely, messages me on Instagram) and says “I think your work is so funny,” or “Your work is filled with so much meaning,” or “Dude, you painted Chewbacca!” I mean, those are all great in my book.

Do you identify with your faceless astronaut protagonist?

I mean, if I didn’t it would be a bit rough to have to paint so many damn astronauts, wouldn’t it? So of course I identify with the astronaut in my paintings. But I realized early on that I also wanted other people to identify with the astronaut, too, and so I keep the face mask deliberately opaque. My goal in these paintings is to try and get people to put themselves in the shoes (or boots, I guess) of the astronaut. People sometimes ask if the astronaut is really a self-portrait, and I guess in a lot of ways it is. But if I just painted myself over and over again, well, people would assume (correctly) that I was a little vain. But I also didn’t want the protagonist in my painting to be a specific person. It could be me, you, or anyone. And I hope that helps people look at my paintings and (if I’m being overly ambitious) the world in maybe a slightly different way. 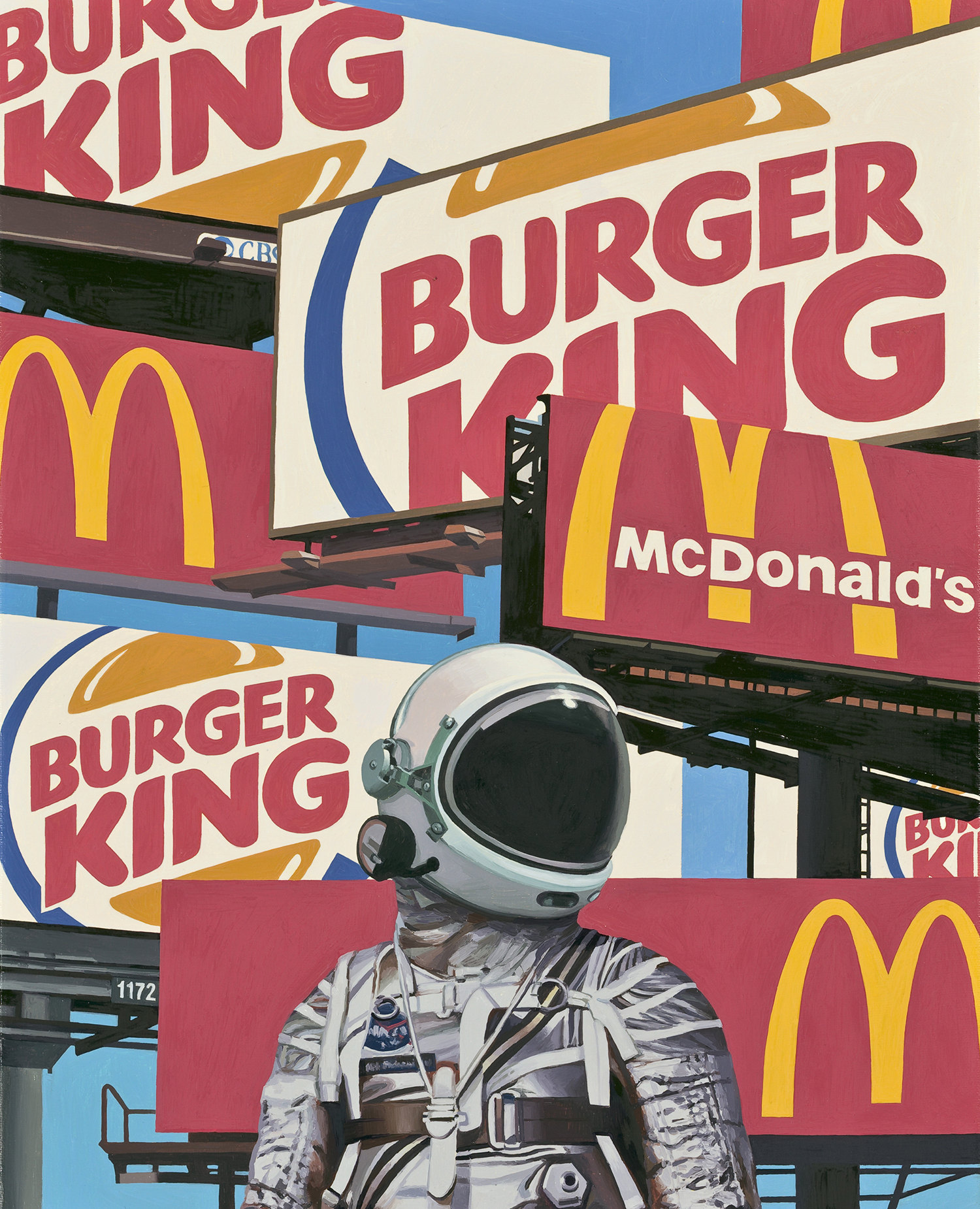 The artist wanted to be an astronaut when he grew up … but that ambition shifted over the years.

You do an amazing job of conveying humor through painting with pop culture references and tongue-in-cheek juxtapositions. Does that ever lead to people misinterpreting your pieces?

Probably! But again, I like to leave my paintings open to interpretation. I’m not interested in telling people what they should think, either about my work or about anything else. I think the world’s a complicated place, and it’s okay to have mixed emotions about lots of things. Sometimes people ask if I really love McDonald’s, and sometimes people ask if I really hate McDonald’s. And the truth is really neither of those things. I think McDonald’s, the restaurant, the logo, just the IDEA of McDonald’s, is kind of a vital part of the landscape we’ve built and designed for ourselves. And so of course I put it into my paintings. Most people, if they look at enough of my work, seem to get that. Which I hope means I’m doing something right.

Where do you get ideas for subject matter?

Mostly by going to the grocery store at night and wandering around. Seriously, though, my ideas normally come when I’m out and about, maybe listening to some music, with maybe just a few vague ideas floating through my head. It’s not really a scientific process. I mean, I also read a lot of science-fiction books and watch a lot of movies, and I like to spend a fair bit of time thinking about the difference between those visions and the weird contemporary world we ended up with. 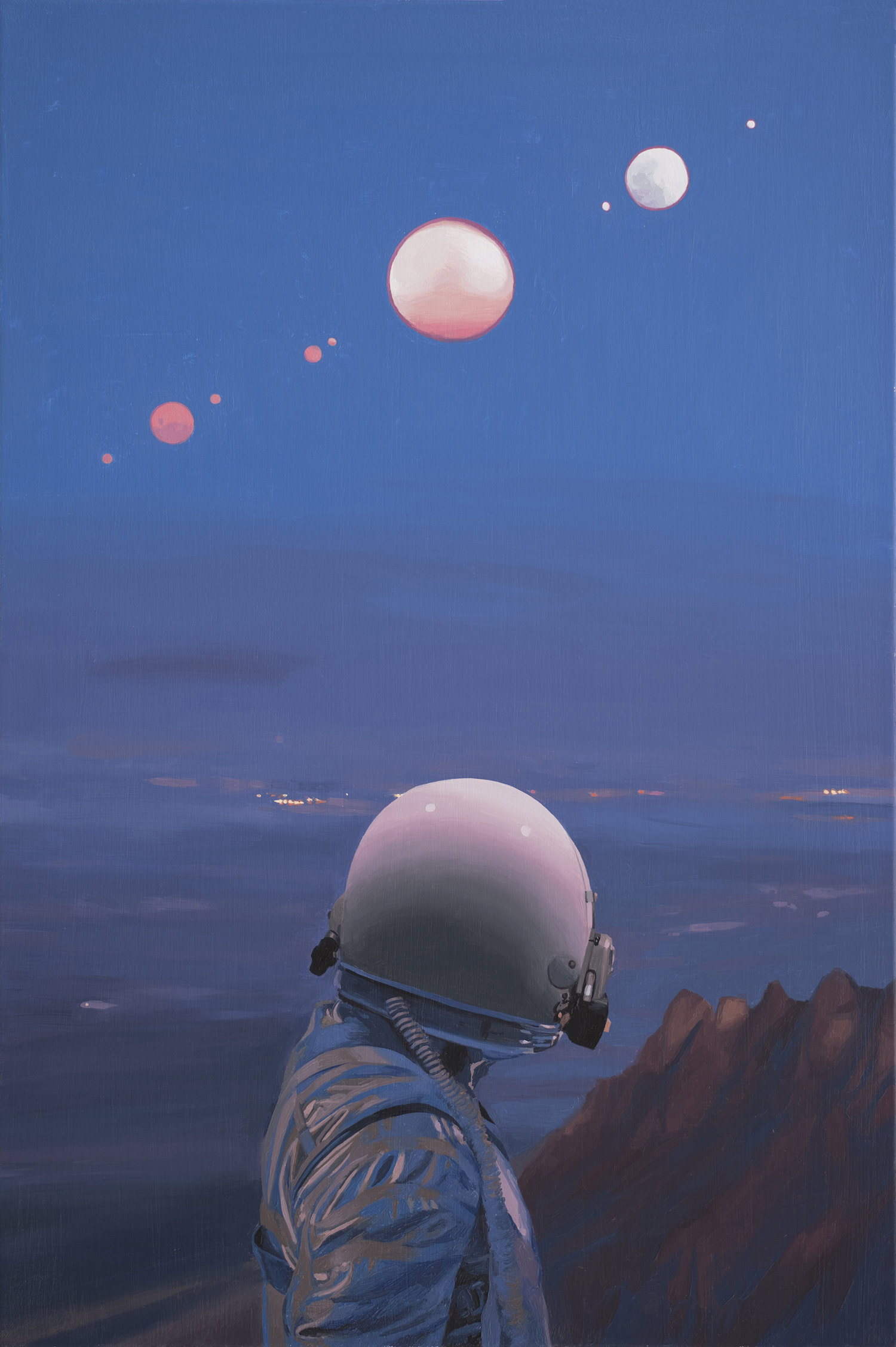 Listfield has no plans to stop painting astronauts. Thank goodness.

Has paint always been your medium of choice?

Yup. I mean, pretty much. In college I dabbled with sculpture a bit, and earlier than that drawing. But it was clear pretty much from the first time I took a painting class that it was what I wanted to do with myself. Even though I was pretty terrible at it in the beginning.

Are there any new subjects you want to explore in the future?

If by “new” you mean “not astronauts,” then no. I’ve always said that, as long as I continue to have ideas of places and things for my astronaut to explore, and as long as I still enjoyed it, that I have no reason to quit and move onto something else. And as long as the world around me continues to be inexplicably weird, then I should have enough inspiration. And I don’t see that changing anytime soon. 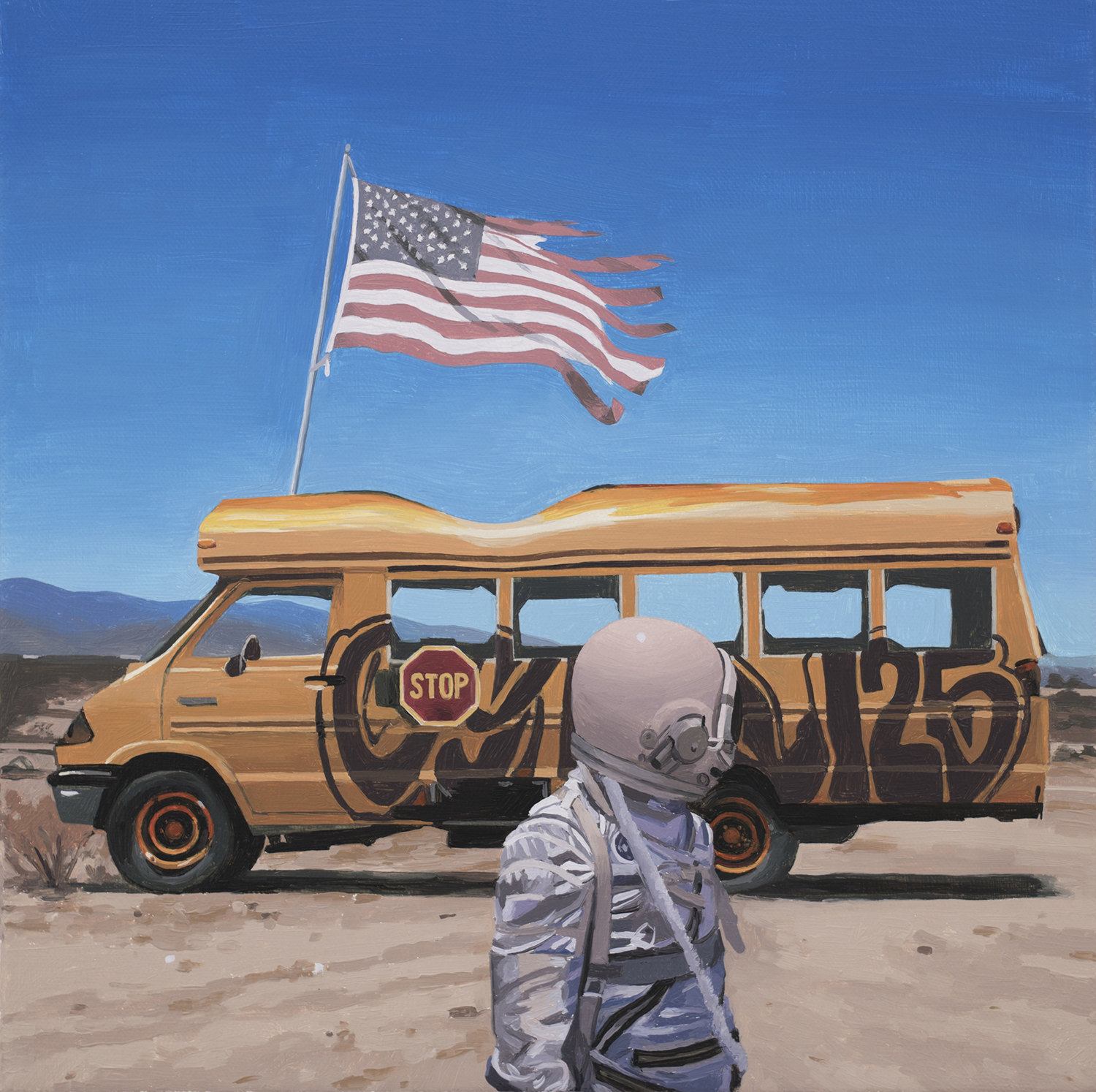 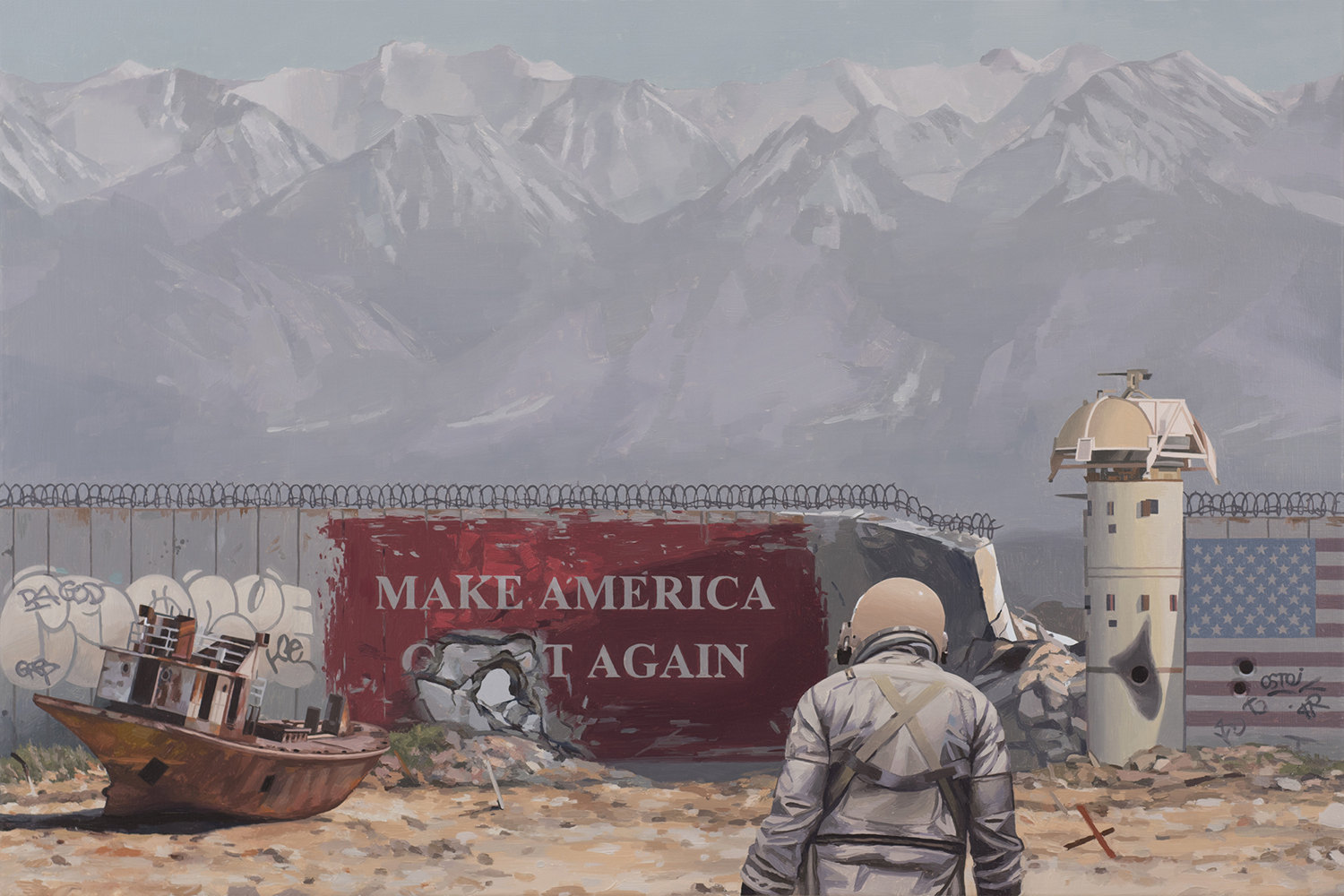 Living abroad gave the artist a sense of what it feels to be a cultural outsider.

You lived abroad for years and then moved back to the United States … did that experience have any influence on your art?

Well I only really lived abroad for bits and pieces of a couple years, back when I was in college and a little after. But that’s an especially formative time, and it did end up having a huge impact on my art. When you spend time living abroad, or in any culture that’s not really your own, you get used to this feeling of not being from there.

And so I eventually returned home, to get a real job and to start my life. And I expected that feeling, of being somewhere far from home, to fade. And I was surprised to find that it did not. I felt a bit like an alien in my own home. I remember going to the supermarket and there was an entire aisle filled with Oreos. Literally dozens of different kinds. And it was too much. I ended up just going back home without them. And it was that feeling—of exploring, of looking at the world as if nothing was familiar, of walking down a street you’ve never been on before and maybe never would again, of being lost in an Oreo aisle—that I wanted to capture in my paintings. And even though I’ve now been back in the US for a very long time, I still try to remember, every now and again, what that feeling was like.

What is it like being an artist in today’s world (and political climate…)?

On the one hand, I don’t think there has ever been a more interesting time to be an artist. And I mean that. If you had told an artist, maybe 20 or 30 years ago, that there would be a tool that would allow them to publish their artwork and immediately have thousands of people looking at it, they would almost certainly cry for joy and offer thousands of dollars for it. And you’d be like “Dude, just download Instagram.”

It’s also the first time in a very long while—OK, maybe ever—where it’s kind of cool to just make whatever kind of artwork you want. If I had come out of school in the 1970s, I could have either 1) made severely minimalist abstract paintings or 2) made weird short films. That’s it. Choose one of those or get the hell out of the art world. Now though? Words like illustration, craft, skill, realism, painting, narrative, abstraction, etc. are no longer used as insults or back handed compliments. Those are all perfectly fine avenues to explore. Some may be more commercially viable than others, but I think we are, at least for now, past the point where there is only one or two acceptable ways of making art. 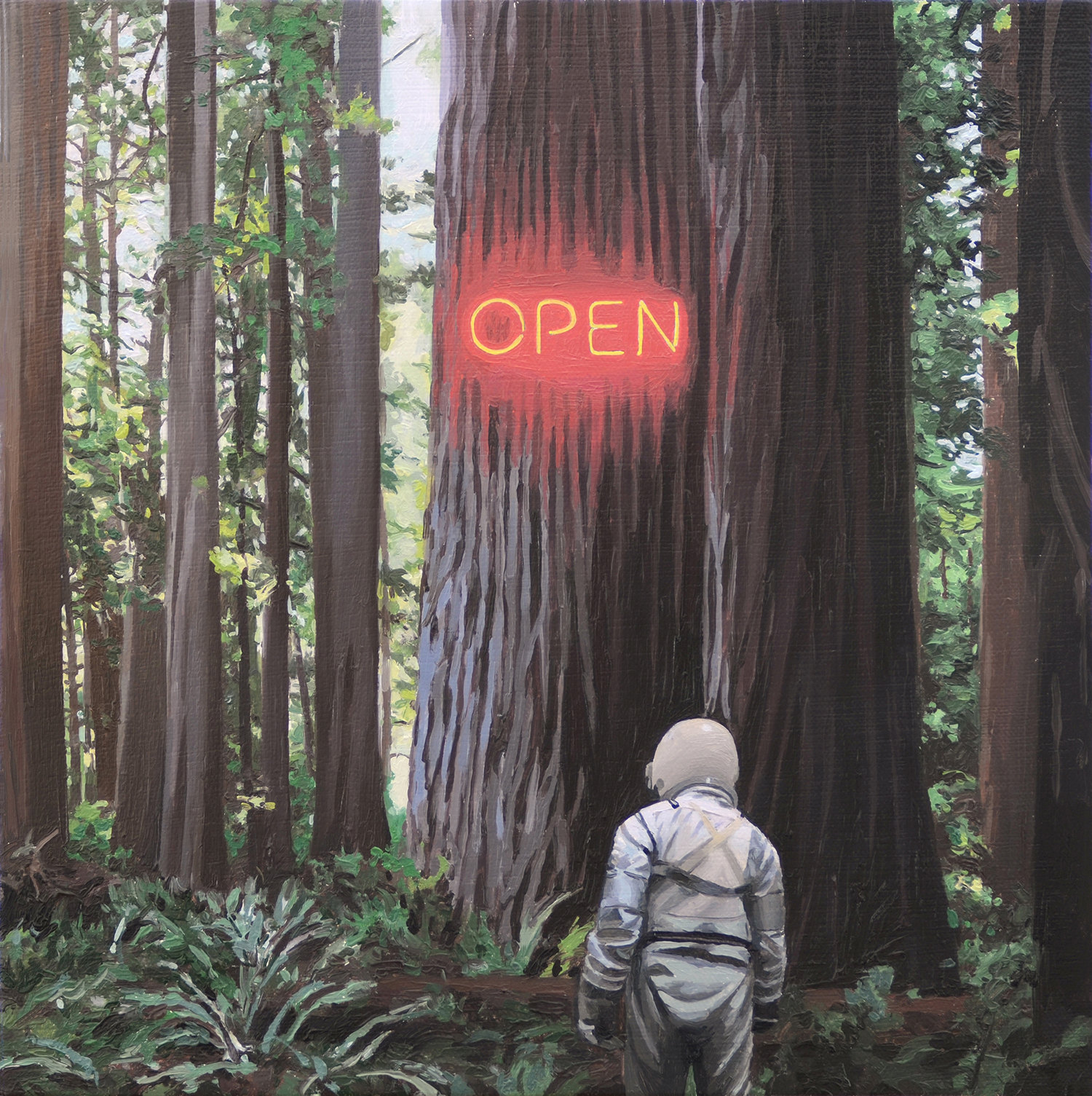 Humor is often an intentional element of Listfield’s work.

What’s something about you that would surprise our readers?

I’m actually the least surprising person you’re likely to meet. If you bumped into me, out on the street, you’d probably think to yourself “I bet that guy makes paintings of astronauts.” And you’d be right. 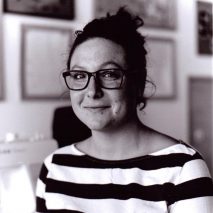