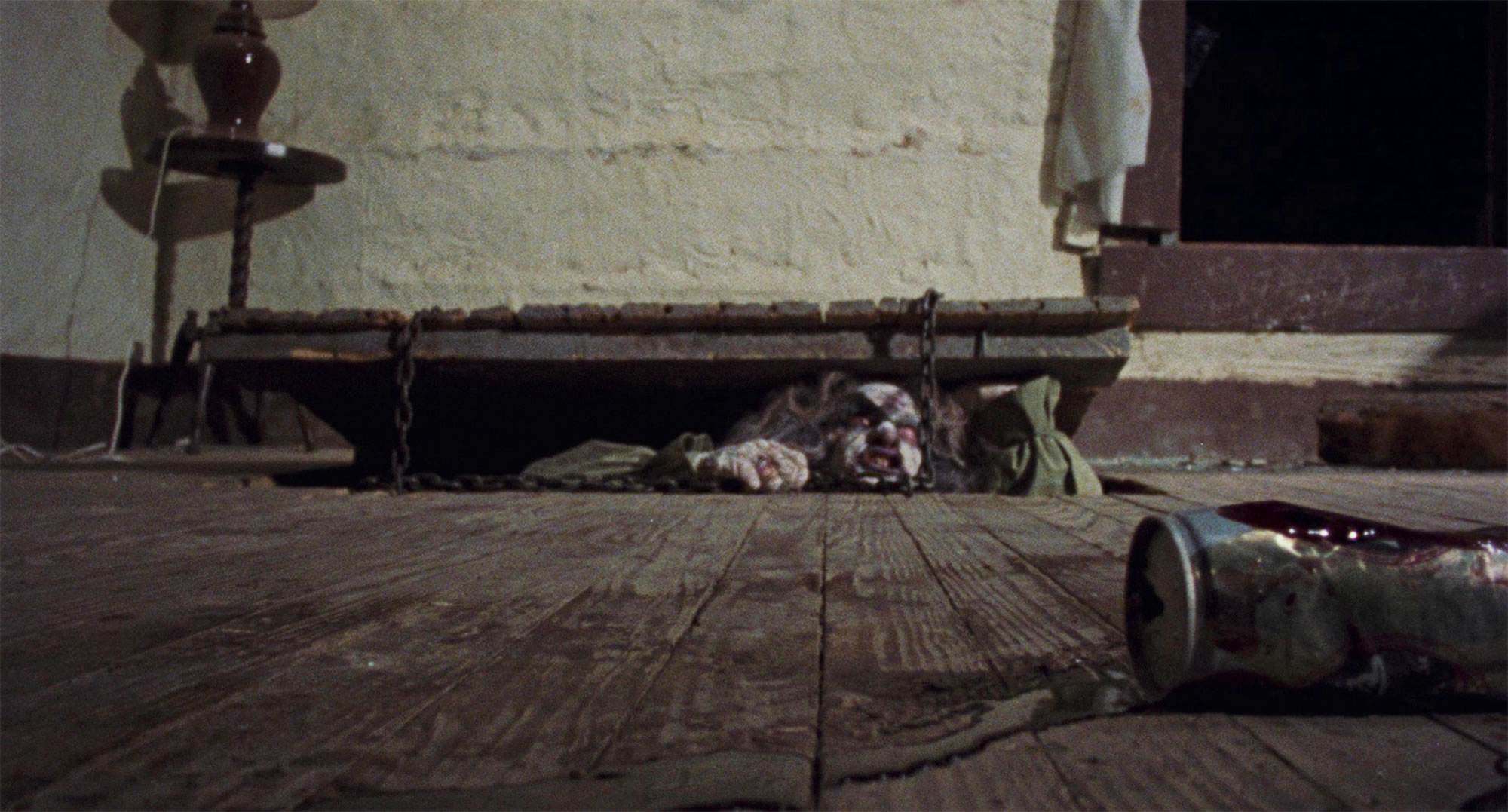 Warning: Contains images that may be considered graphic and disturbing to some readers.

VHS technology and the rise of the video store was manna from heaven, for the humble horror cinema enthusiast.

The 1980s was a brilliant decade for the genre, too. Slasher movies, Italian cannibal and zombie films, splatter flicks and ghost stories upped screen violence in ways never quite seen before.

Titles that might not have been distributed in movie theatres were now readily available at local video emporiums across the land. Distributors cashing in on the fad for VHS players were releasing absolutely anything and everything. Whether you saw a horror film on the big screen or at home in your bedroom, B-movie horrors left a mighty impression.

Top: Sam Raimi’s “The Evil Dead” launched the director as a new, if somewhat reluctant, voice in horror cinema. 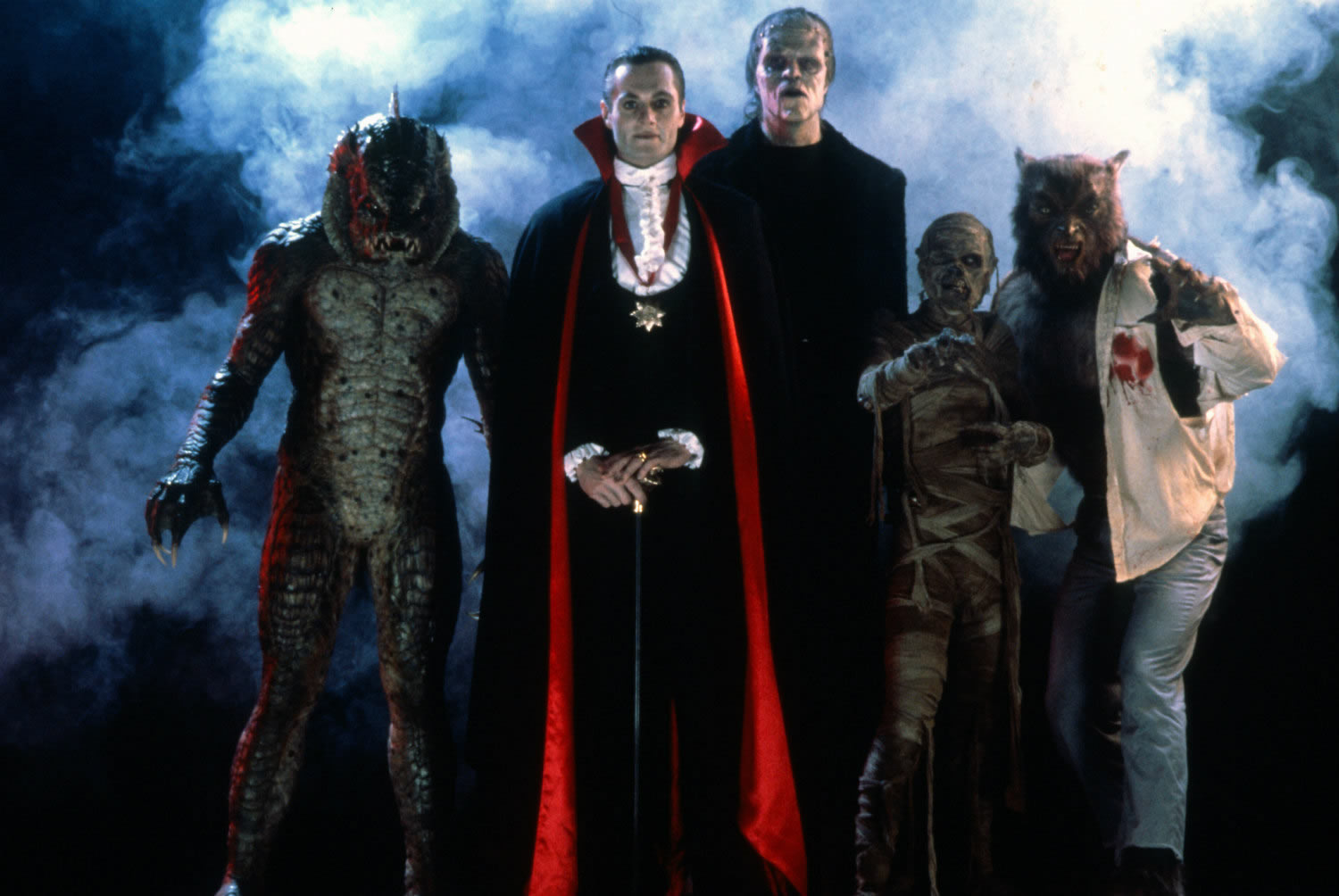 Icons of old Universal horror pictures were reintroduced to kids of the 1980s.

“The Monster Squad” is essentially ‘“The Goonies” meets Universal horror icons and was co-written by ace Hollywood screenwriter, Shane Black. The film is dorky fun, full of memorable scenes and the line “Wolfman’s got nards” is still quoted to this day. At least, it is by me. “The Monster Squad” became a video store favourite, among kids growing up in the 1980s and ’90s. 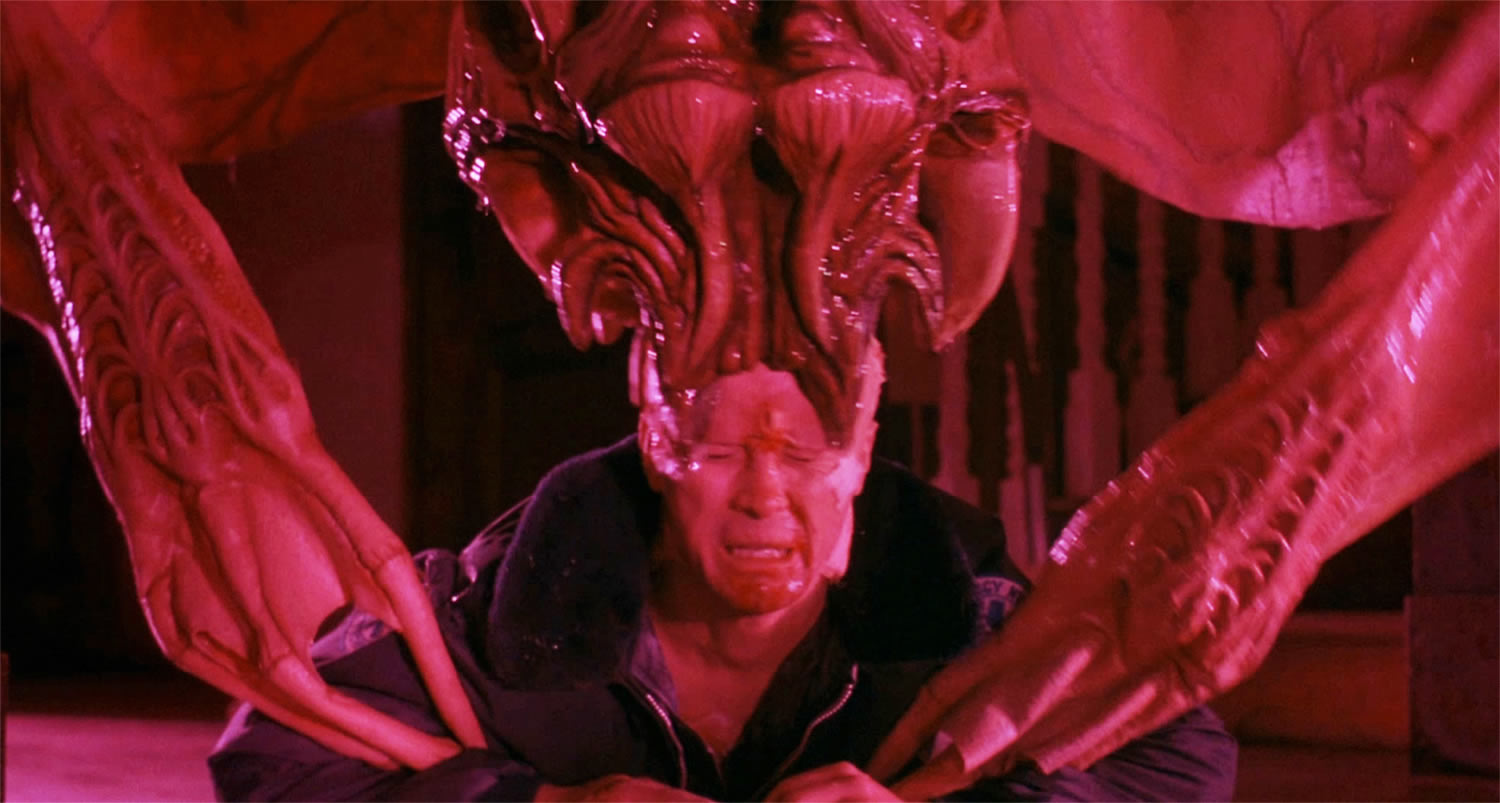 Stuart Gordon’s splatter feasts are still a marvel to behold thirty years on. Inspired by the writings of H.P. Lovecraft, Gordon had previously filmed “Re-Animator” (1985) also by the legendary Rhode Island author, “From Beyond” (1986) pushed the boat out even more, to present to the audience a horror-comedy with even more gooey, repulsive imagery. The film firmly established actors Barbara Crampton and Jeffrey Combs as genre icons. 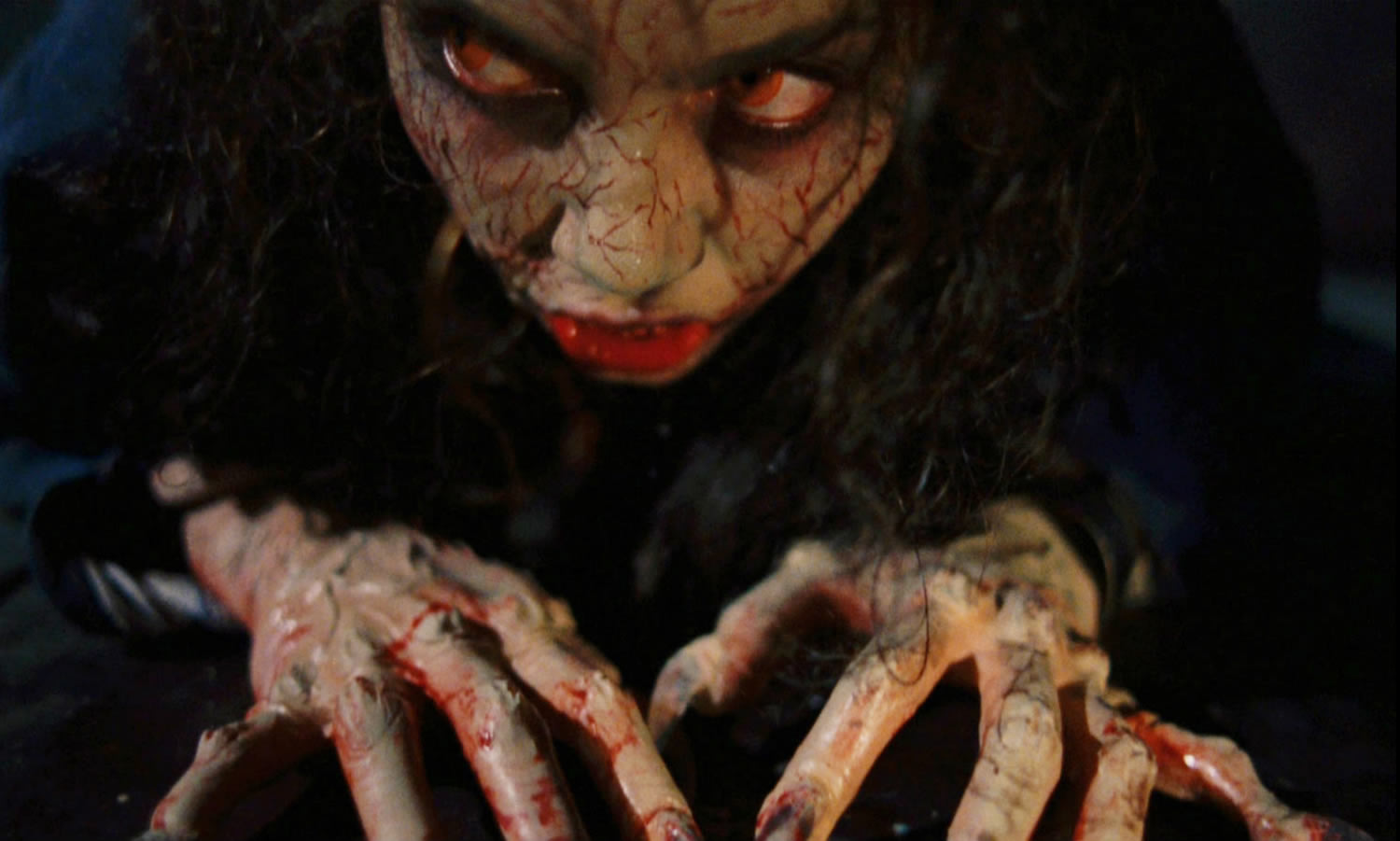 The transformation effects in “Demons” are superb.

Lamberto Bava joined forces with Dario Argento for a series of ludicrously plotted but massively entertaining creature features. Sergio Stivaletti’s effects work is supreme stuff, too. Invited to a special midnight screening of a new horror film, the audience is turned into ravenous killer creatures, leaving a few survivors to fight their way out of the theatre. 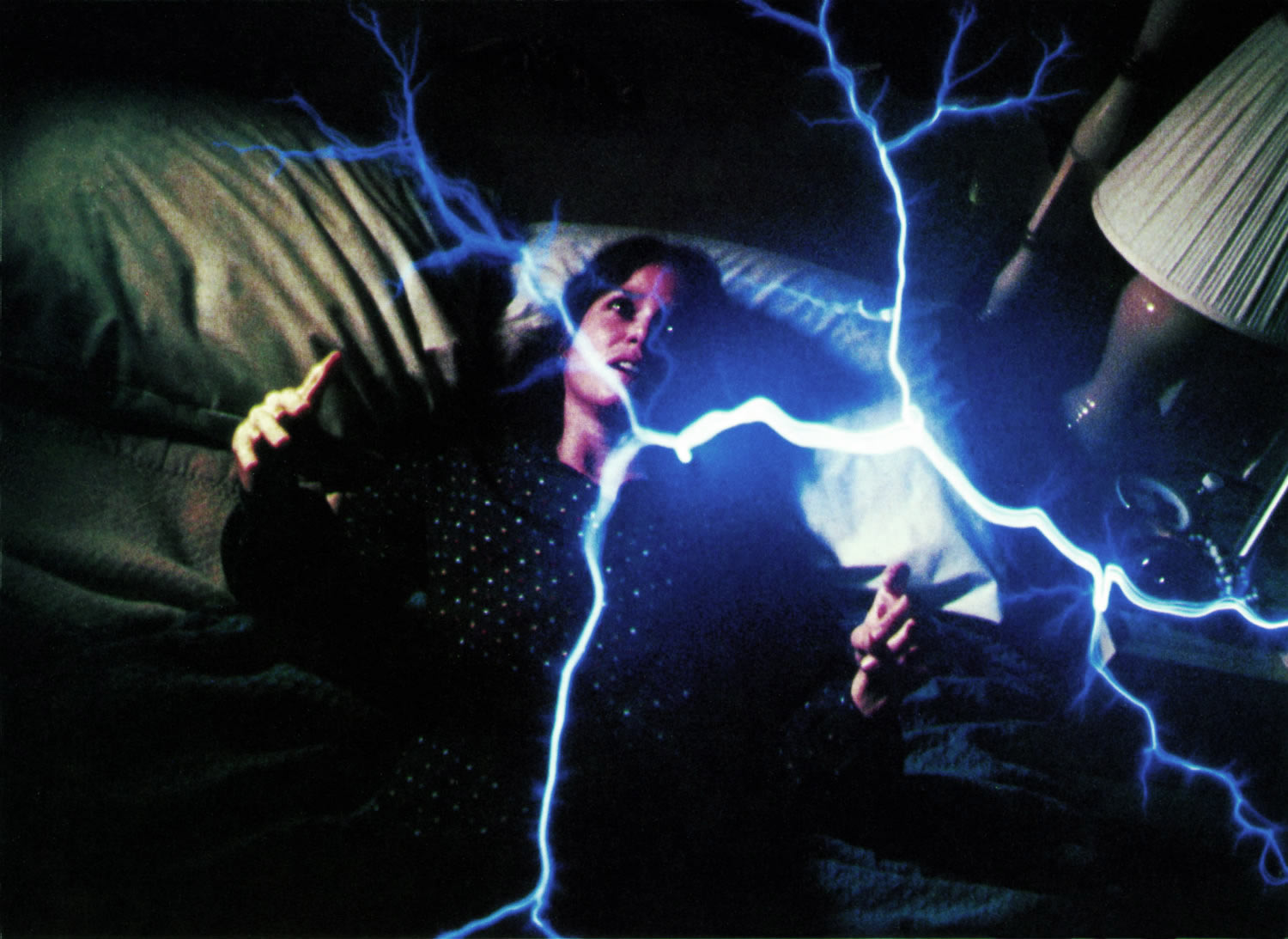 “The Entity” is based on a true story. Sleep tight.

Is there another movie out there with a final line of dialogue as freaky as the one delivered in Sidney J. Furie’s underrated poltergeist shocker? The answer is: No. Because you just can’t beat a poltergeist greeting their victim with “Welcome home, c***.” Barbara Hershey is tremendous in the lead role of a young mother attacked nightly by a demon. It’s a seriously disturbing film. 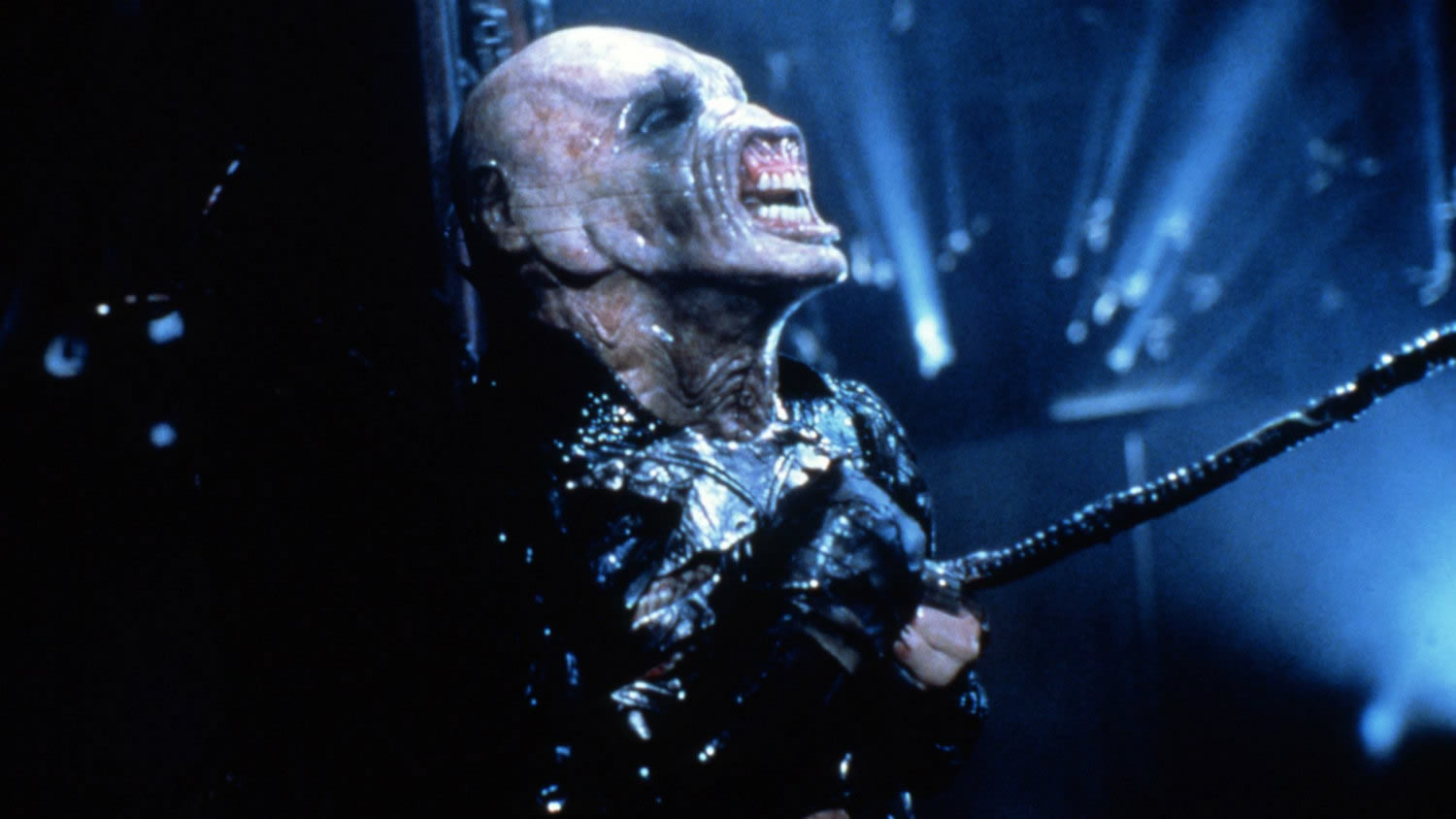 The Cenobites and their hellish underworld were given more screen-time in the “Hellraiser” sequel.

The 1988 sequel to Clive Barker’s “Hellraiser” (1987) comes across like a crazed S&M version of “Alice in Wonderland.” The world of the Cenobites, figures who made fleeting appearances in the first one, was explored in more detail and the special effects were pushed to the forefront. It was seen as an inferior film, at the time, but has since become a cult classic. 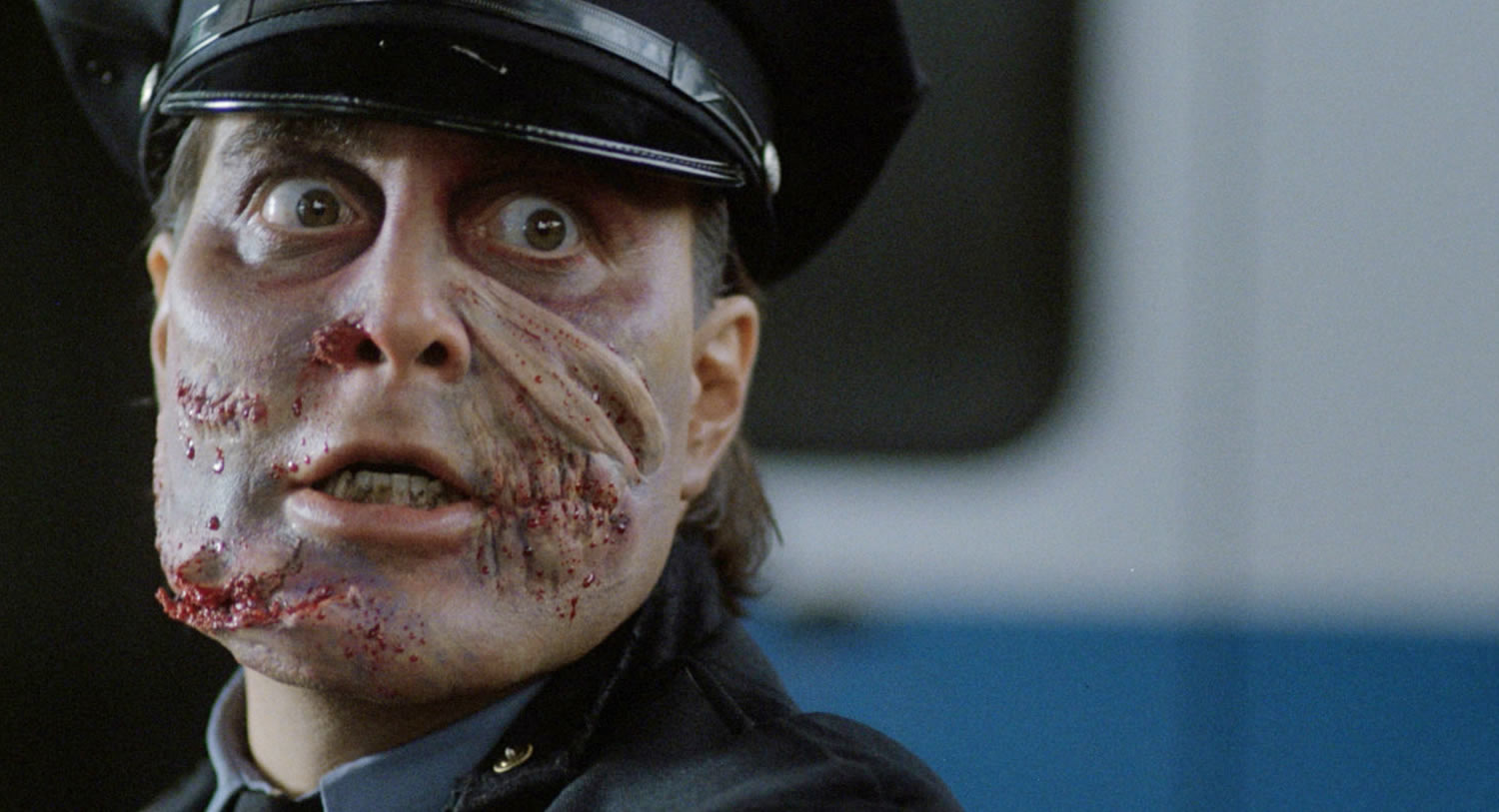 Actor Robert Z’Dar became a B-movie icon, thanks to his role in “Maniac Cop” and its sequels.

Directed by Bill Lustig from a screenplay by Larry Cohen, “Maniac Cop” is a high-concept slasher about a zombie police officer causing mayhem on the streets of the Big Apple. “Maniac Cop” is a quintessential 1980s B-movie and two further sequels were produced. Look out for Sam Raimi’s cameo appearance as a television reporter. 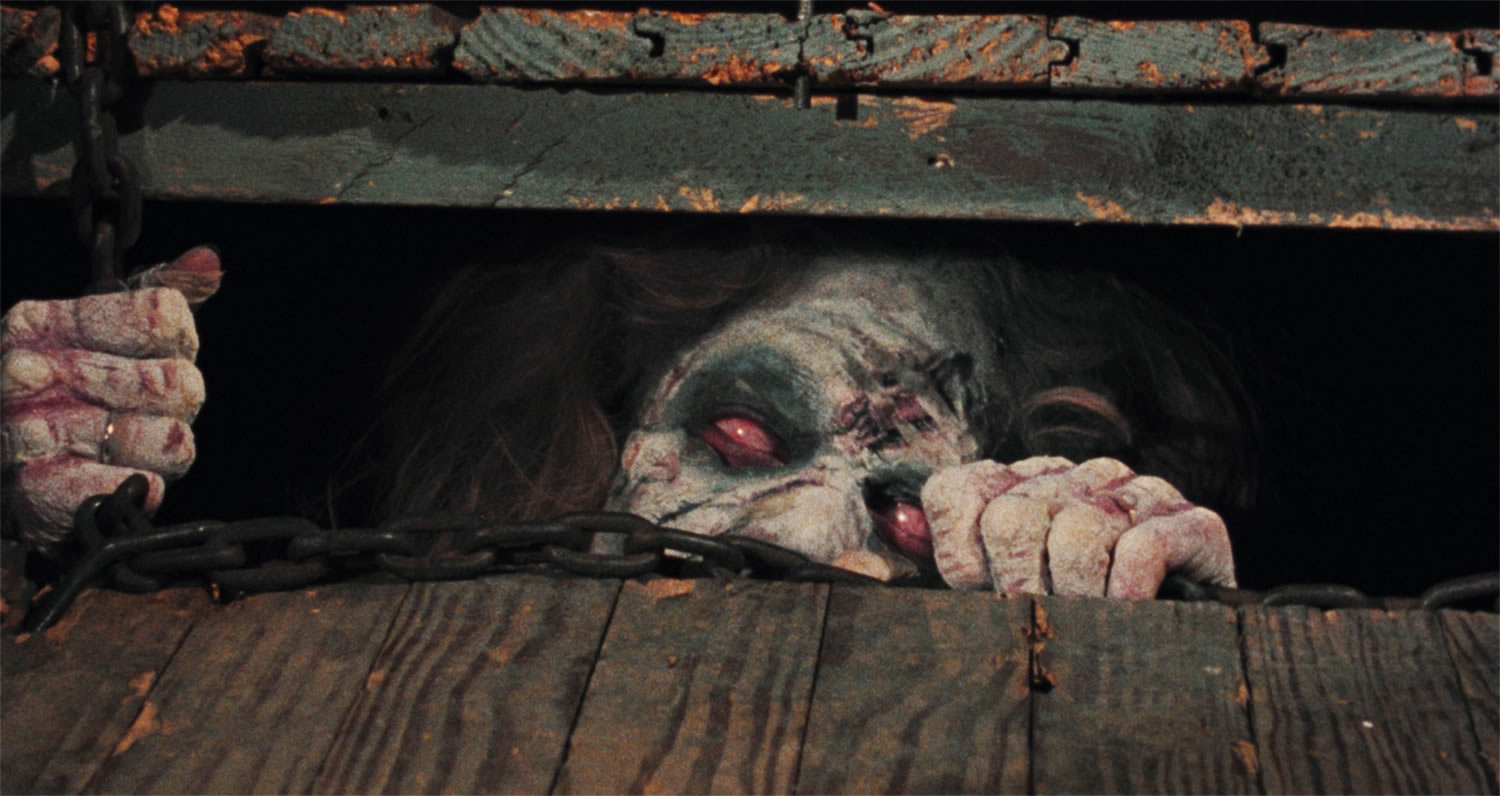 “The Evil Dead” was public enemy number one, during the 1980s “Video Nasties” scare, in the UK.

The 1988 sequel and “Army of Darkness” might have all the best lines of dialogue and found a neat balance between the splatter and comedy, but there is nothing like Sam Raimi’s original trip to the woods. For a start, it’s scary. Possessed Cheryl stabbing a pencil into her friend Linda’s ankle is a particular highlight. 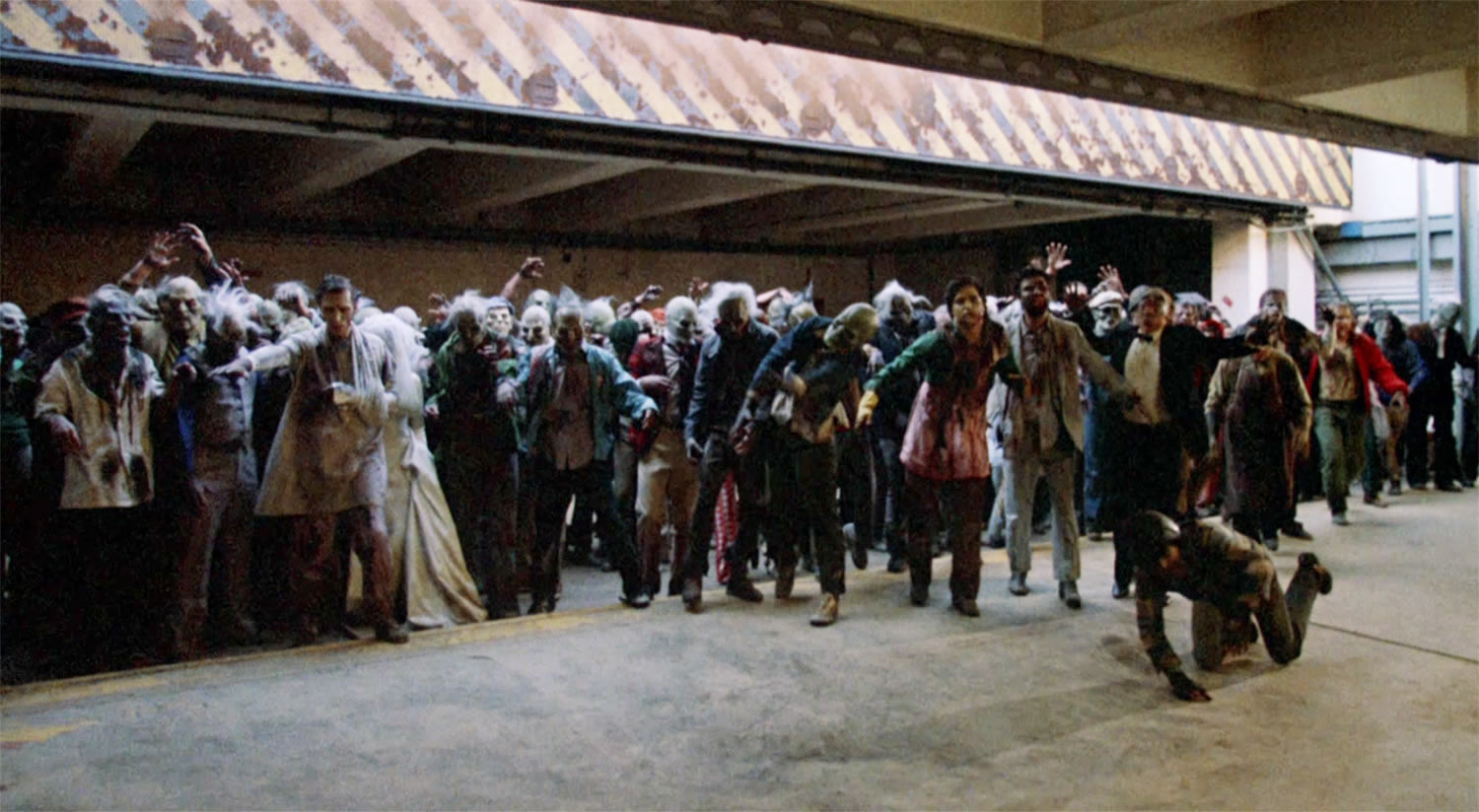 Not many directors get to invent a horror genre, but George A. Romero pretty much did.

Day of the Dead

George A. Romero’s 1985 zombie apocalypse tale was intended to be the “Gone with the Wind” of zombie movies. But funding issues meant that he couldn’t film the script he had written and had to make drastic 11th hour changes. There are some who consider “Day of the Dead” to be Romero’s greatest achievement, in the genre he pretty much single-handedly created. 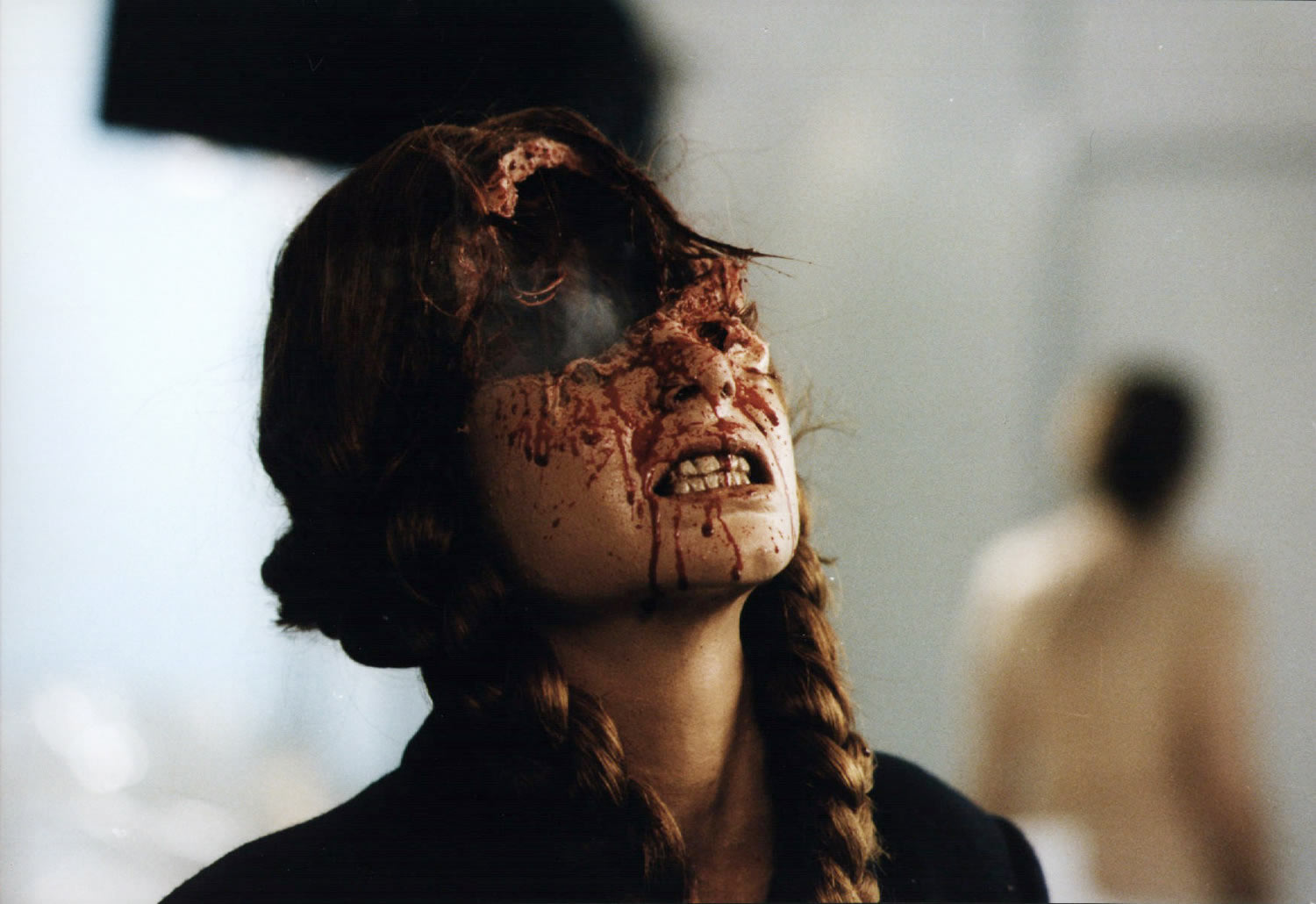 Giannetto De Rossi’s makeup effects in “The Beyond” are wonderfully gruesome.

“The Beyond” (1981) is a contender for the greatest horror film ever made. The hallucinatory nightmare vibe and lashings of blood-and-guts make it a distinct and often completely terrifying experience. Lucio Fulci was an erratic talent, certainly, but his “The Gates of Hell” trilogy have become firm fan favourites in recent years. Of the three, “The Beyond” is the standout. 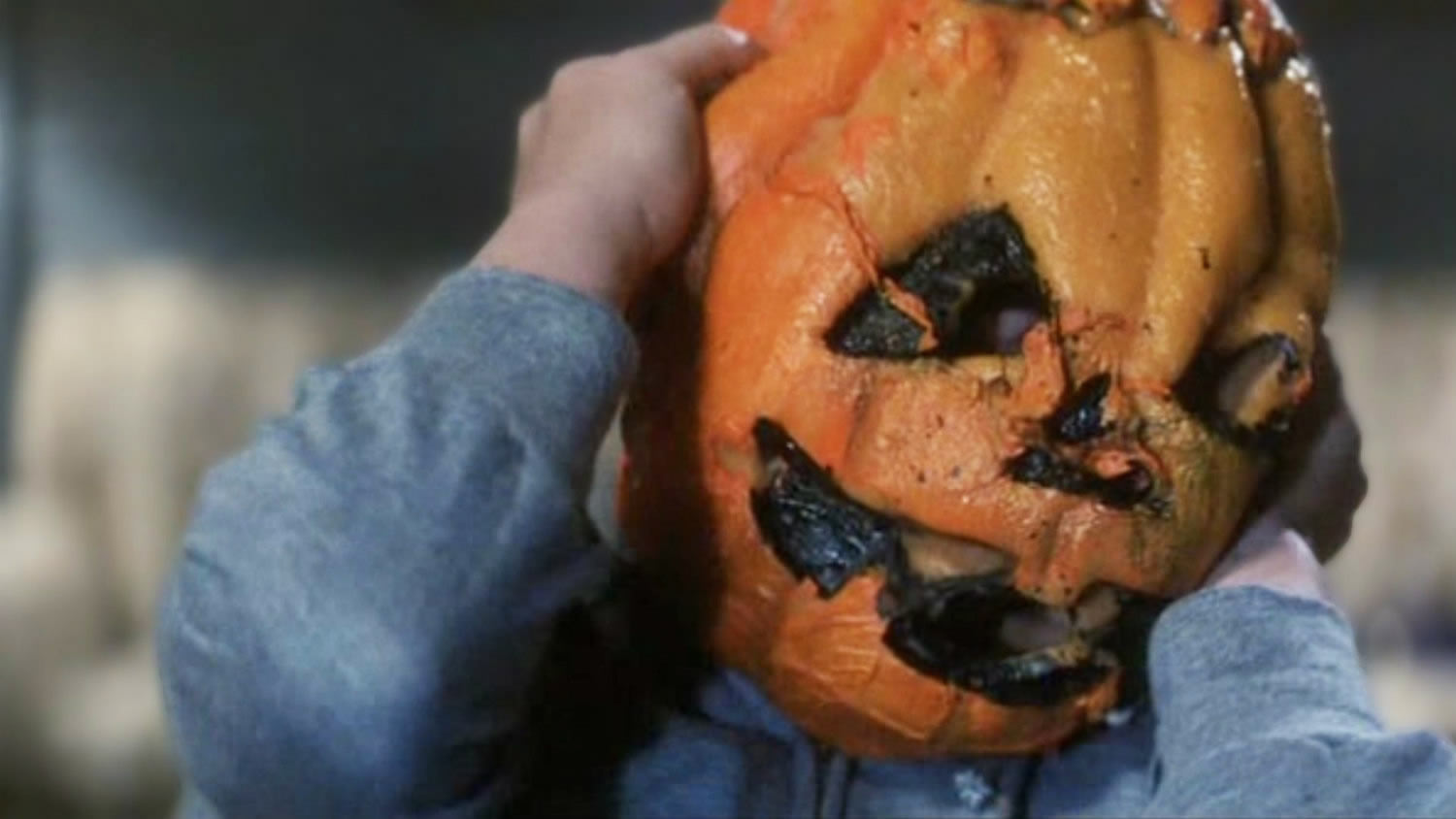 It’s taken over thirty years, but “Halloween III: Season of the Witch” is fast becoming a cult movie.

Halloween III: Season of the Witch

Producers decided to give Michael Myers a break from killing babysitters, when it came time to make the third “Halloween,” and audiences were like, “Yo Goober, where’s the Shape?” Needless to say, “Halloween III: Season of the Witch” tanked at the box office in 1982, but its reputation has grown in the last ten years and is a clear stylistic influence on Adam Wingard’s “The Guest” (2014).