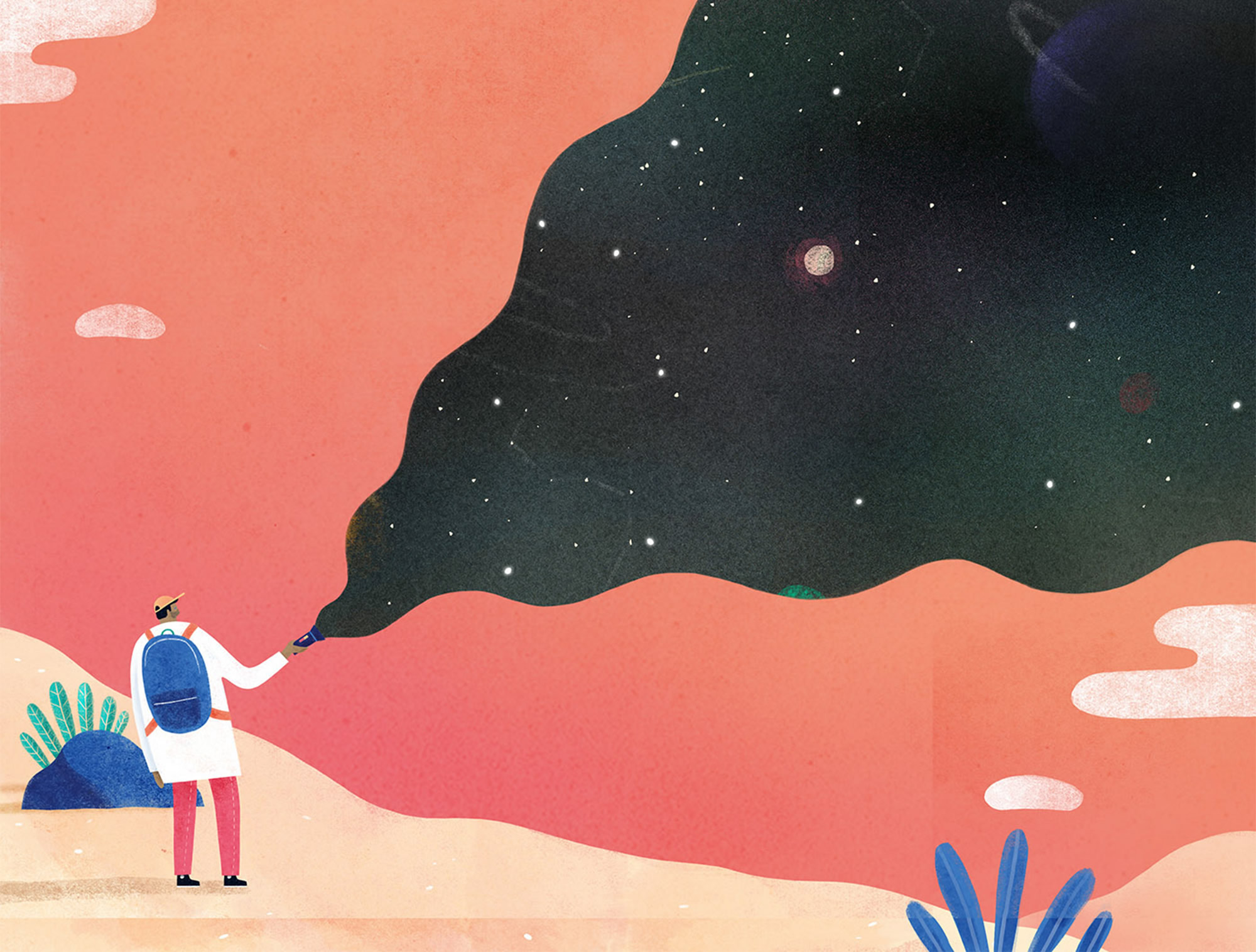 The field of illustration once had a period of time called “The Golden Age.” This 40-year stretch began in the 1880’s and continued into the 1920’s, coming to fruition because of advances in image reproduction technology.

Once the public got a taste of graphic art, there became an┬Āinsatiable demand for it. American illustrator Howard Pyle┬Āwas at the forefront of The Golden Age┬Āand carried on by his students, like N.C. Wyeth and Anna Whelan Betts. Once photography became present everywhere, the public opinion on illustration changed. Mesmerized by photos, they began to replace the handcrafted images previously seen in newspapers and magazines.

Throughout the decades, however, illustration has lived on despite the ebb and flow. Its role has even expanded thanks to the Internet and technology (like VR), opening up new possibilities for illustrators to create images that are remembered for years to come.

Just as we did in 2015, IŌĆÖve selected 10 of the best illustrators from 2016. This yearŌĆÖs selections feature those working in a myriad of waysŌĆöfrom traditional painting to three-dimensional images created on the computerŌĆöbut they all have one thing in common: an alluring visual language that transcends the media in which they work.

Above:┬ĀMark Conlan’s illustration is about surprises and celebrates the things you find when you aren’t looking. 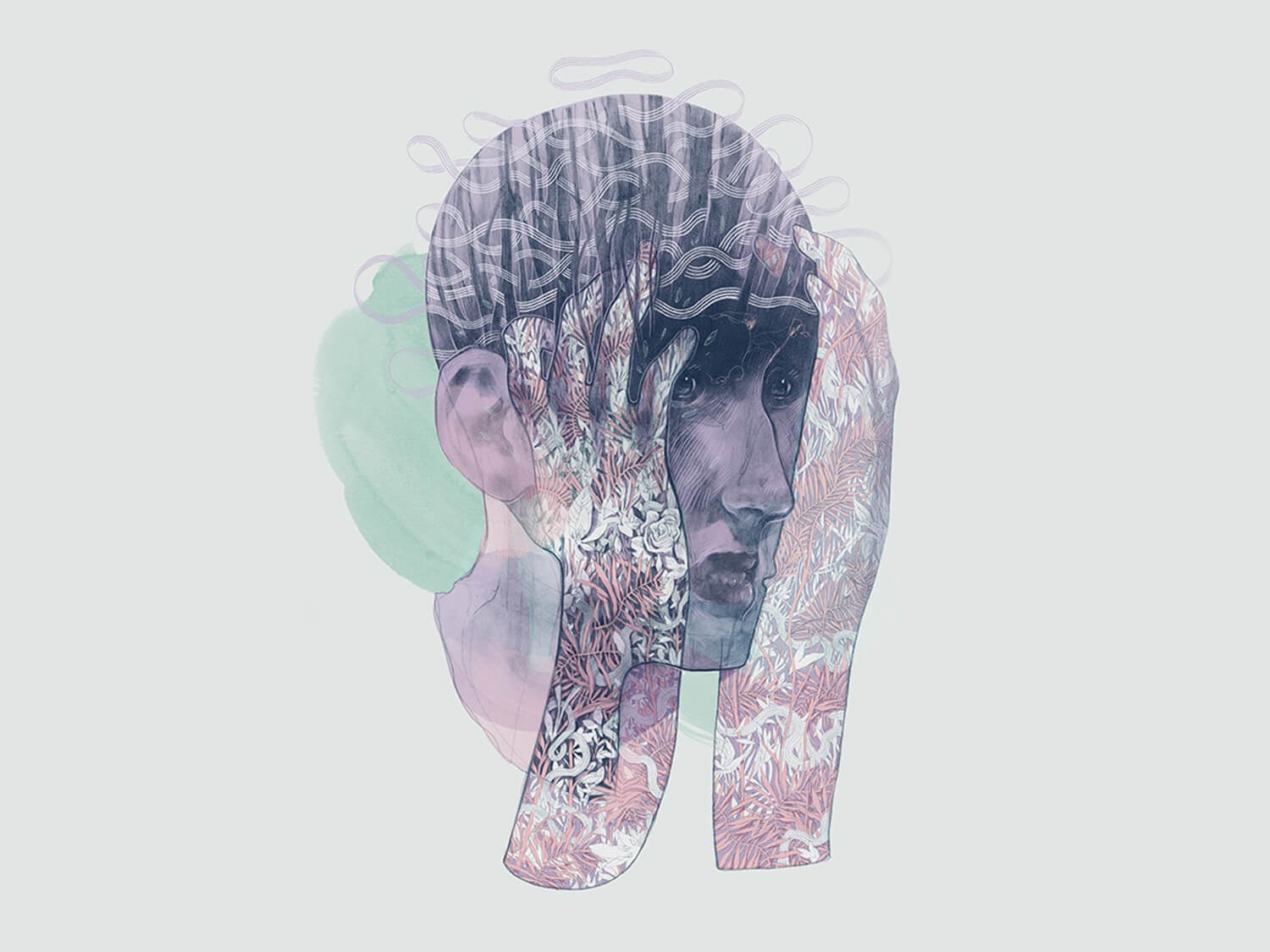 To get an idea of Thibault Daumain’s involved process, read his helpful tutorial.

Illustrator Thibault Daumain uses both analog and digital methods for creating his work. This piece titled “Voyeur” was produced as a tutorial for Advanced Creation magazine and is detailed on DaumainŌĆÖs website. He began the process for┬Āit with a graphite sketch that was then scanned and altered in Photoshop. Afterwards, Daumain colored and added digitally-drawn accents and textures on top. Even though they were added on the computer, they still look hand-drawn thanks the the special configuration of the brushes. 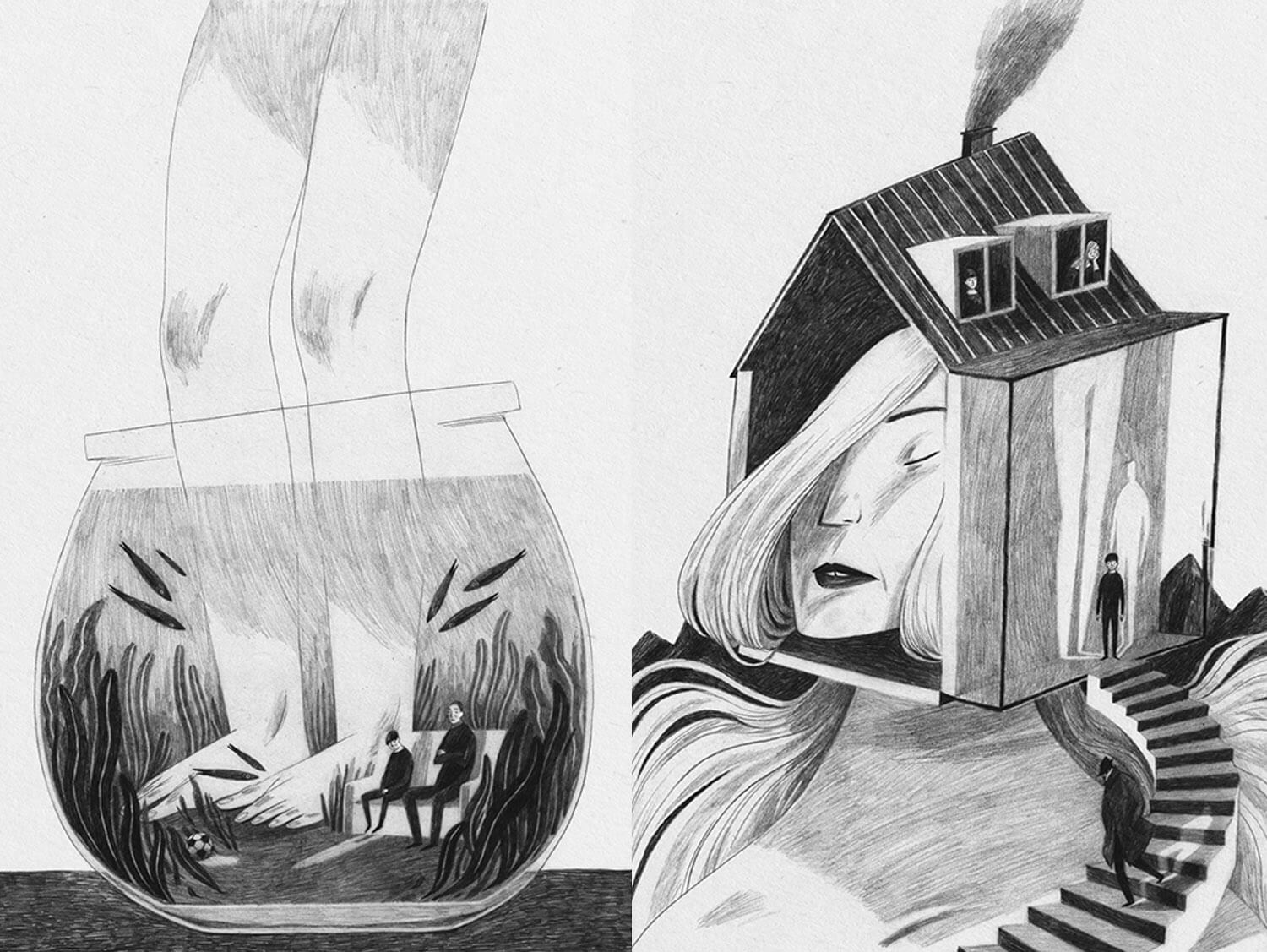 IllustrationŌĆÖs roots are in books. Like those illustrators before her,┬ĀAnja Su┼Īanj created a series of graphite images called “City” based a book of the same name by author Alessandro Baricco. Stating that the publication “influenced her greatly through the years,” Su┼Īanj also explains that “City is also the name of my graduation project that tries to recreate the mysterious and whimsical world of Gould, a child genius.” She does so through images that sometimes raise more questions than they do answer. This, however, is part of the success of┬ĀSu┼Īanj’s work. 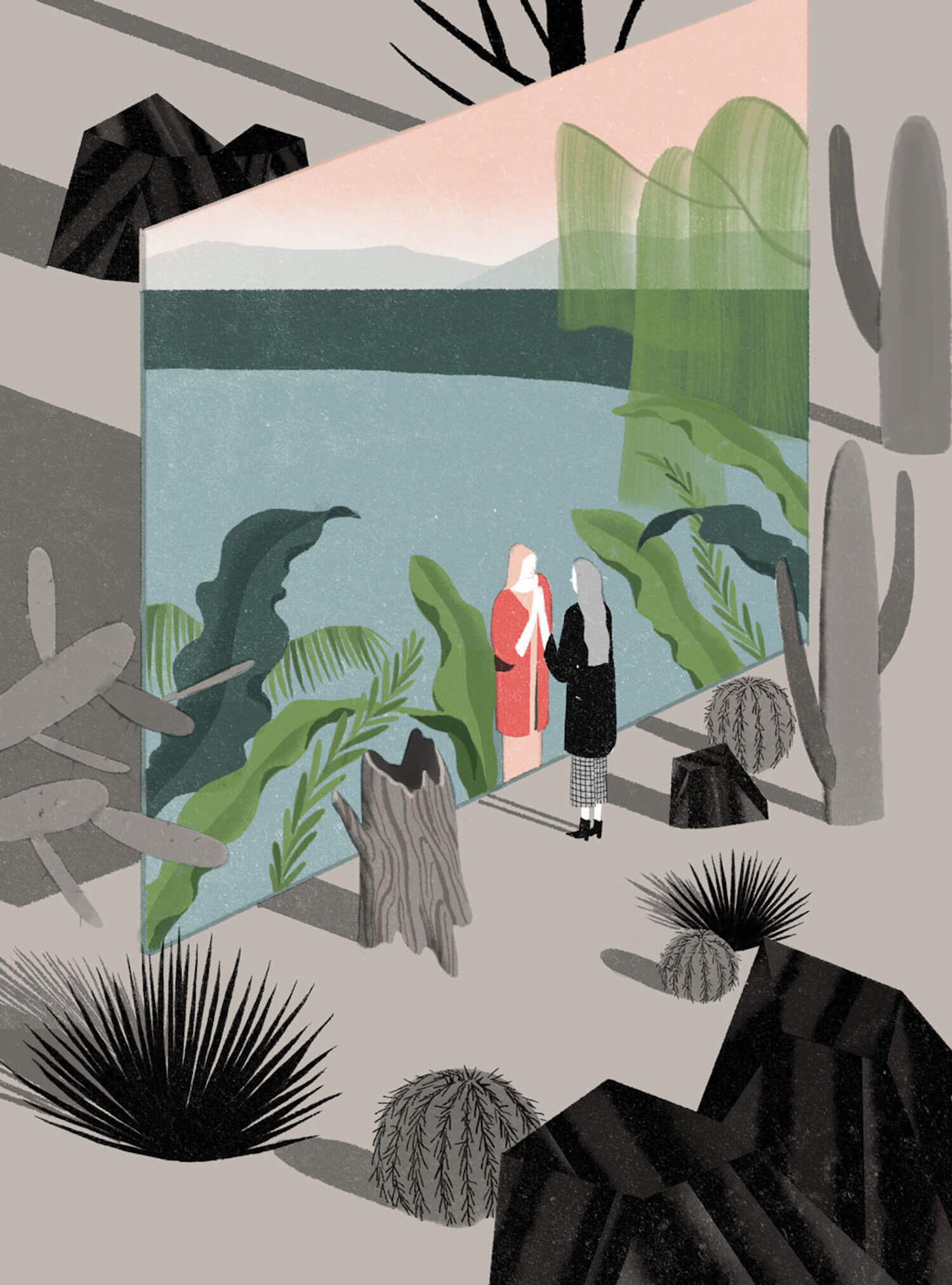 Jun Cen has also created animations that explore the depths of the mind.

With a background in animation and thriving career in editorial illustration, Jun Cen creates compositions that feel like scenes from a larger film. Tranquil and often surreal, his work invites us to look inside of ourselves while we read the text that it accompanies. This particular piece appeared in byFaith magazine in an article entitled “Forgiving Ourselves” and how, according to the publication, “The Bible never speaks of forgiving ourselves. Not a word. Not a whisper. Not a hint.” 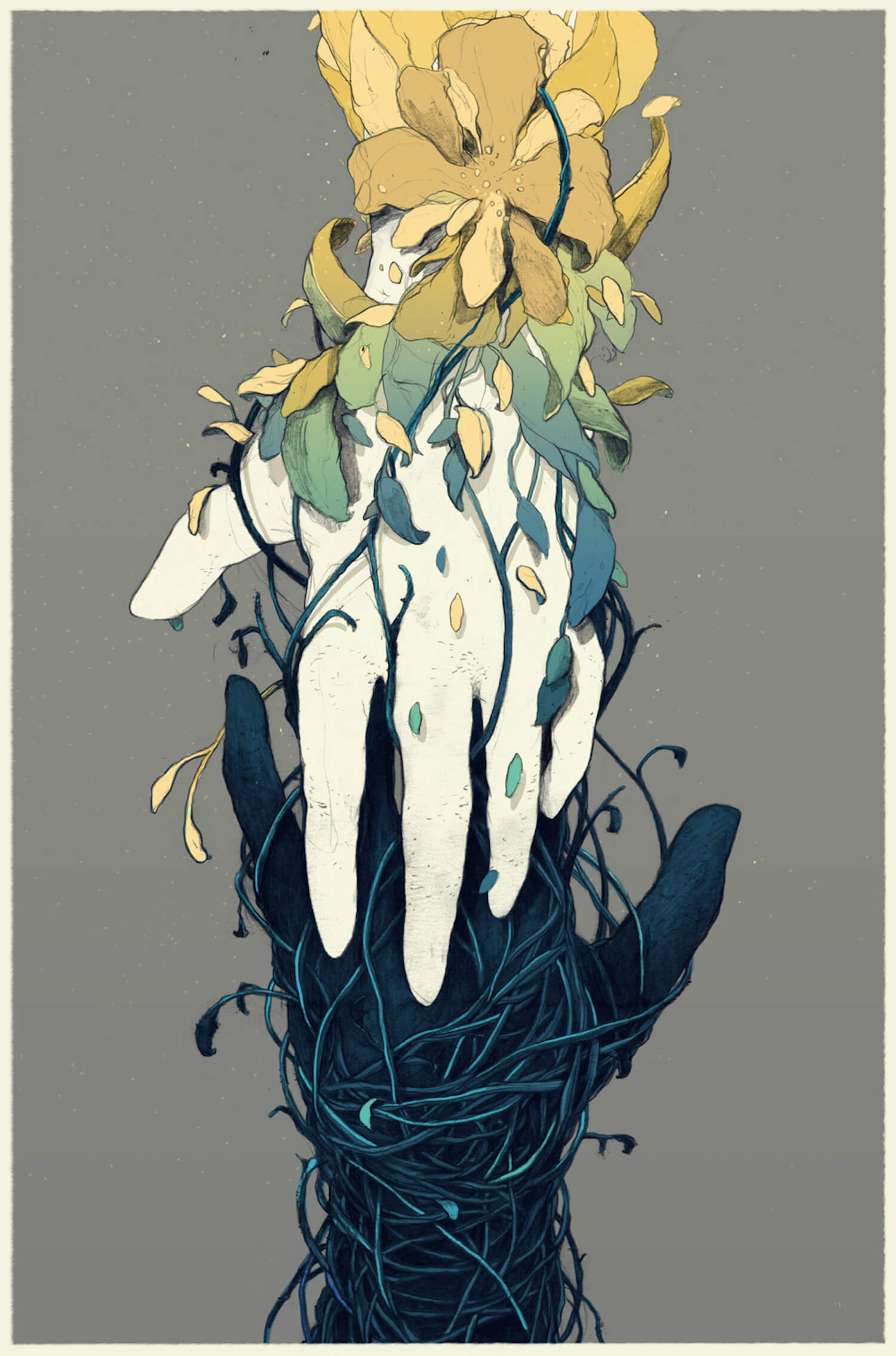 In August of 2016, Simon Prades compiled a selection of his commissioned illustrations made (so far) that year. The list included clients such as Outside magazine, New Scientist and The New Yorker (one of illustrationŌĆÖs most sought-after clients). This composition appeared in New Scientist and is about ŌĆ£the negative effects of empathy.ŌĆØ On Behance, Prades shared his other sketches he sent to the client. His other drawings included portraitsŌĆöthis one was the only one that included hands as they attempt to hold on to each other. It has a raw emotion, in a way, that his other choices did not show. 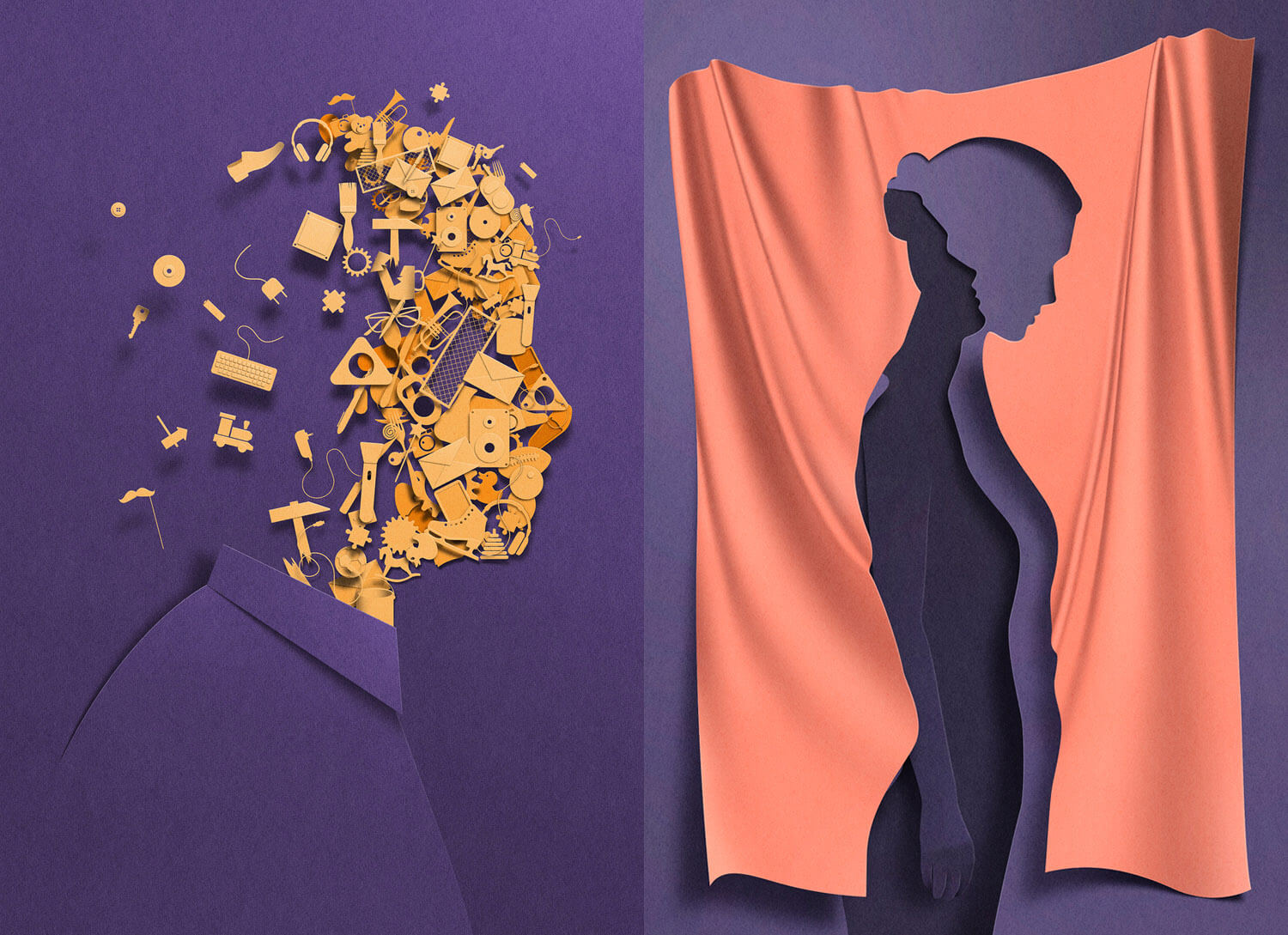 Many of Eiko Ojala’s have an animated component to them.

Estonian illustrator and art directior Eiko Ojala produces images that look like handcrafted cutouts, but theyŌĆÖre primarily crafted in Photoshop. Using carefully placed highlights and shadows, Ojala creates the illusion of depth by seamlessly blending some analog methods with digital. This is a time saverŌĆöif thereŌĆÖs a change from the client, Ojala can quickly make the alteration without pulling apart his entire piece. And he can also make animated versions. 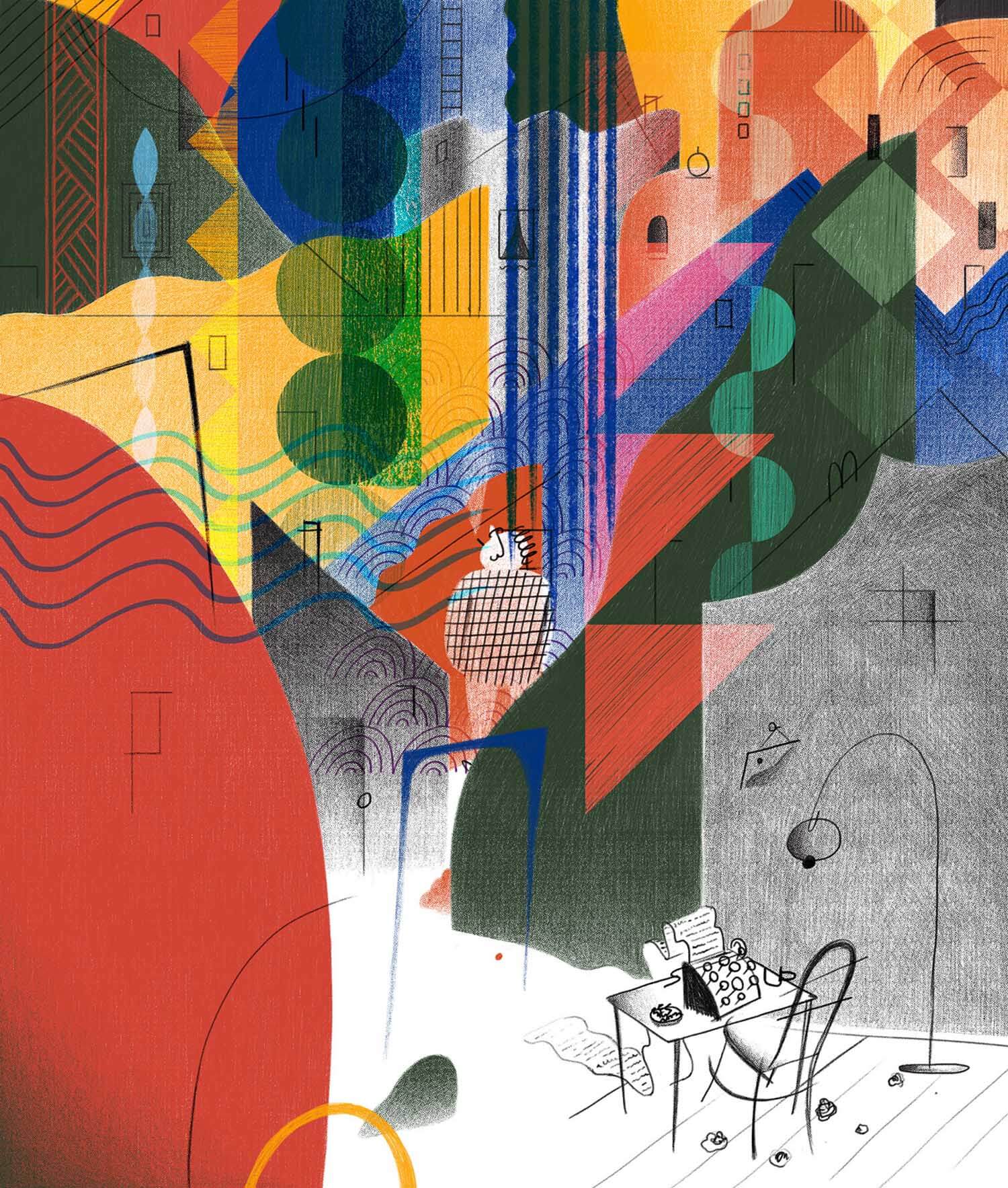 Gizem Vural is an illustrator “who, unlike most, never knew she wanted to illustrate.” She thought she wanted to be a graphic designer and trained for that as her career. But after moving from Istanbul to Upstate New York, however, she “realized she wanted to draw for a living instead.” Her colorful, conceptual imagery has earned her a rich client listŌĆöincluding The New York Times, The Guardian and The New YorkerŌĆöin addition to winning prestigious awards from Society of Illustrators and American Illustration. 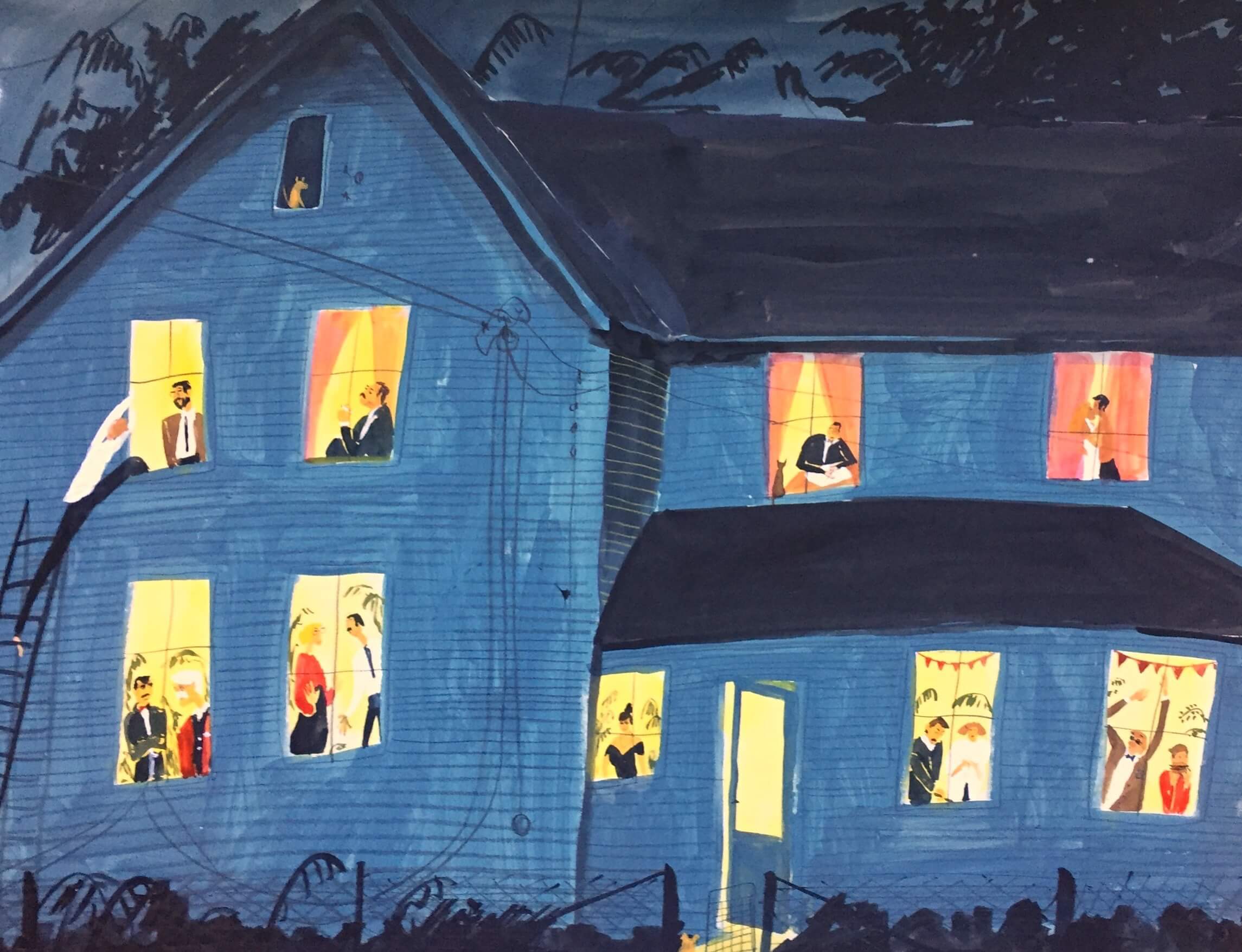 Kirsten SimŌĆÖ paintings often have elements of humor sprinkled throughout them.

South African artist and illustrator Kirsten Sims has the most traditional way of working out of the people selected here. Opting for a fine art approach, her lively brushstrokes are reminiscent of Impressionist painters. Pigments mix and mingle on canvas, just like the people in her work. ŌĆ£I think I paint the parties I would love to go to, and the types of people I would love to meet,ŌĆØ she tells This Works. Continuing, “There is more than enough pain and darkness in the world, I feel it deeply. Sometimes humor is the only way to deal with big, scary, horrible things.” 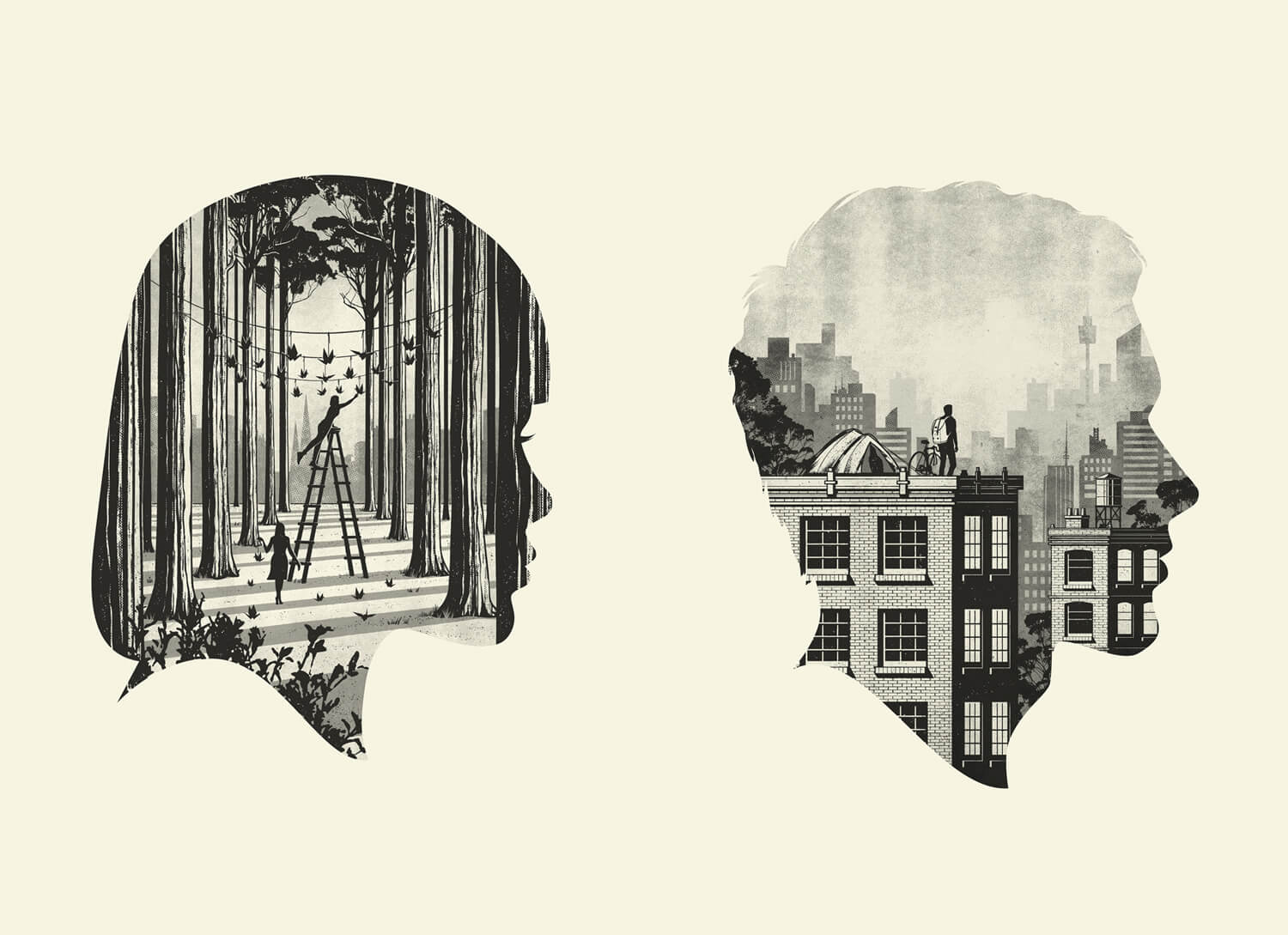 Andrew Fairclough, aka Kindred Studio, has produced portraits that use a double-exposure effect to add visual depth to the images. These two pieces were created for Insider Guides, which are a set of┬Āinternational student city guides. Each is presented as a full-page illustration that “covers various aspects of student life in Australia, from adventure to food, nightlife to fashion.” The digital pieces utilize texture for a handcrafted feelŌĆösomething in which Fairclough excels. Earlier this year, he founded True Grit Texture Supply “as a one stop shop for high-quality textures, Photoshop brushes and resources for the texturally minded creative.”

Mark Conlan approaches his illustrative work with a refreshing optimism.

In 2016, Mark Conlan created a series called┬Ā“Unexpected Discoveries” that celebratesŌĆörather than fearsŌĆöthe unknown. “This little four part series is all about being able to find certain things that you never knew existed,” he explains. “Its just a matter of shinning light on to the subject. Maybe then you can truly see a whole new world.” This is done through an emphasis on character design, an aspect that Conlan focuses on in his editorial, publishing, and advertising campaigns. 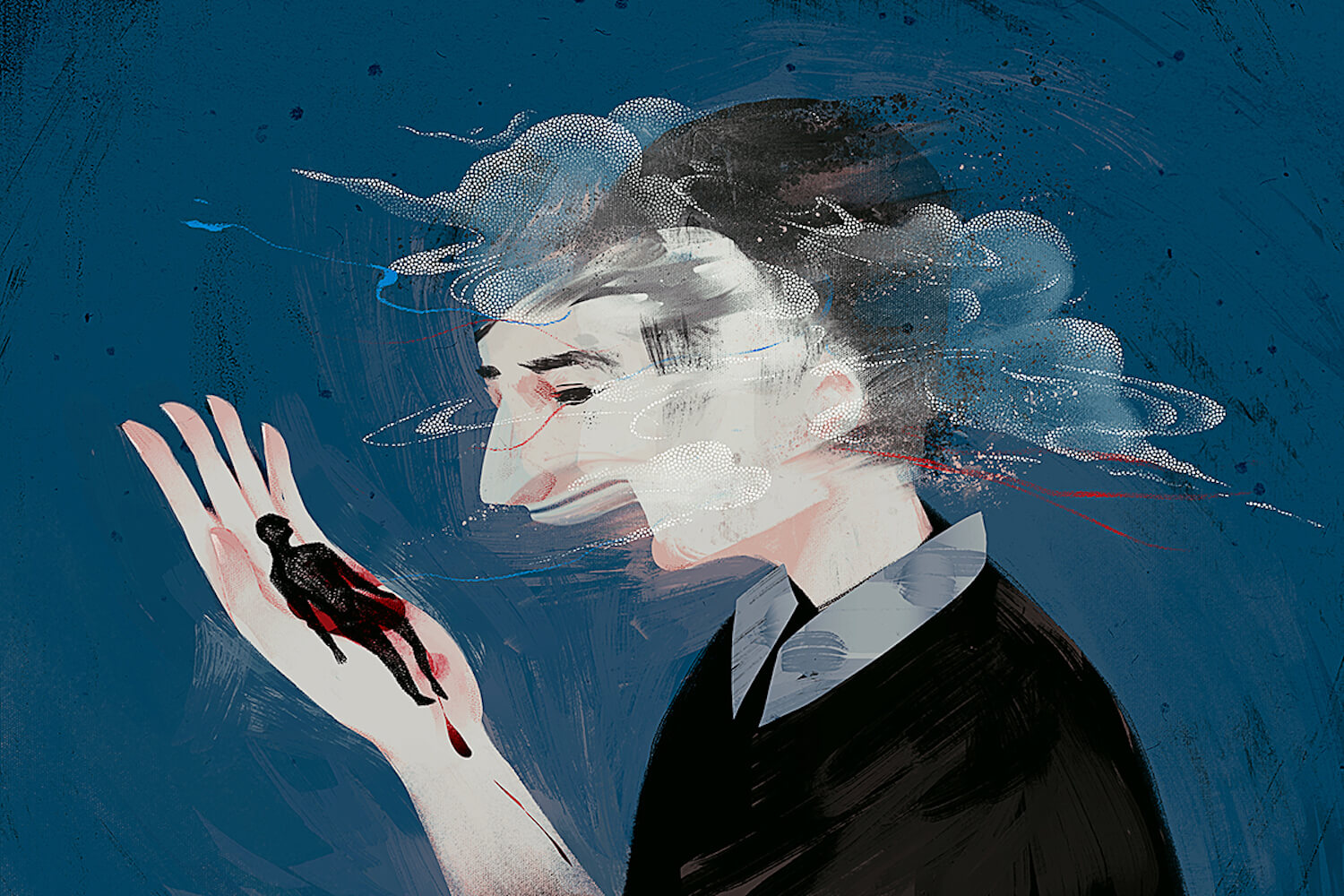 Dola Sun shares the rough sketches of this image on her website.

For New York City-based Dola Sun, the most alluring part of illustration is the “process of solving a problem with visual language.” This selected multi-textured illustration communicates feelings of confusionŌĆöand itŌĆÖs supposed to. The analog/digital hybrid image was created for VICE and the Marshall Project in an article called “The Night I Killed a Man.” Sun describes it as a ŌĆ£story about a despairing young man killed a person under a psychedelic status.ŌĆØ