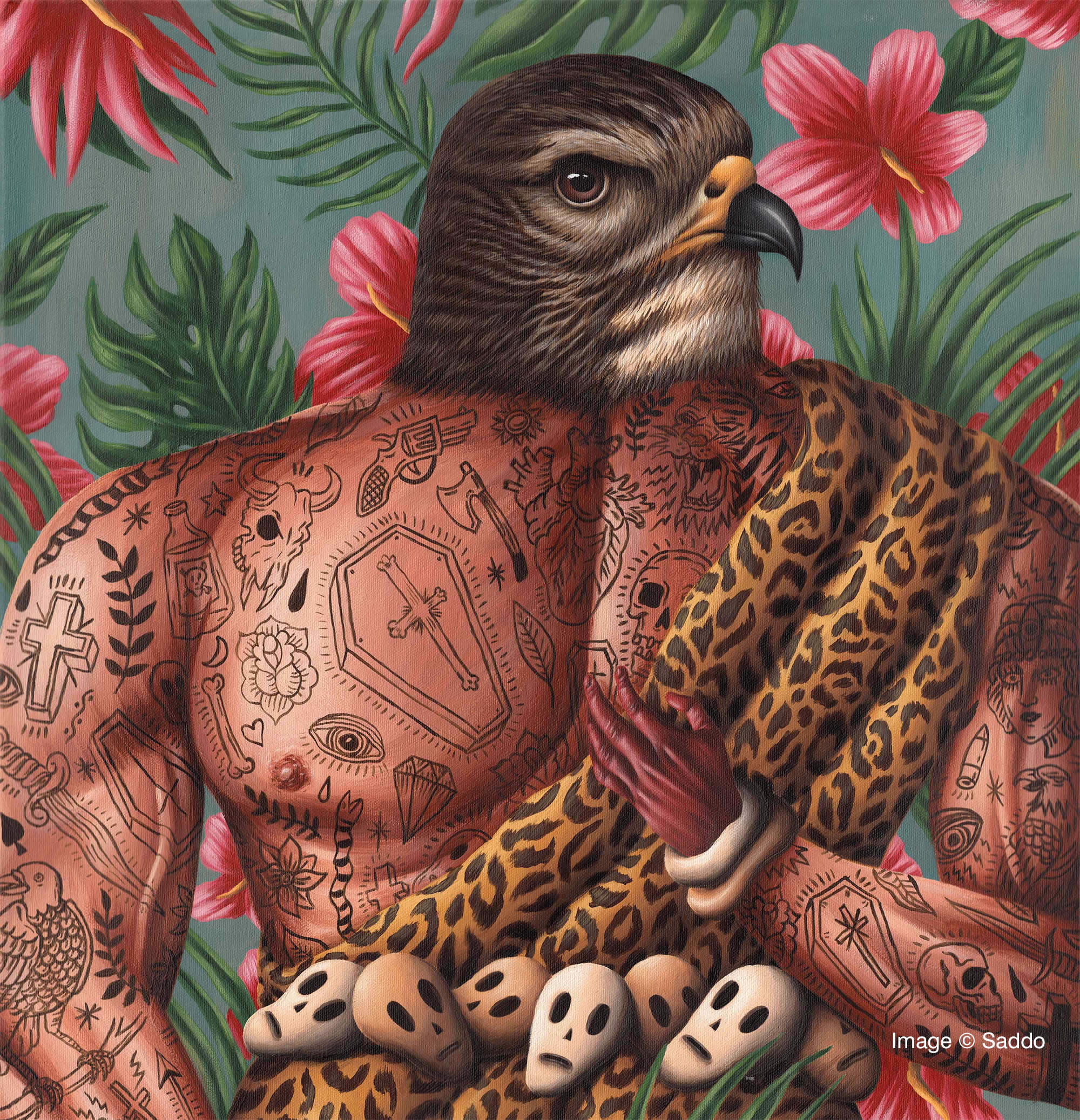 As tattoos transition from a once taboo practice into one that‚Äôs socially acceptable, artists are implementing elements of this timeless body art into their work.

In illustrations, ceramics and embroideries, tattoos have two primary focuses: one is purely decorative and adds a special flair to the subject or object. The other takes a conceptual approach, using tattoos as a way to examine what we think about our bodies as well as our perception of other people.

Above: This piece from Saddo‚Äôs “Coffins” was created during an especially depressing winter. (Image ¬© Saddo.) 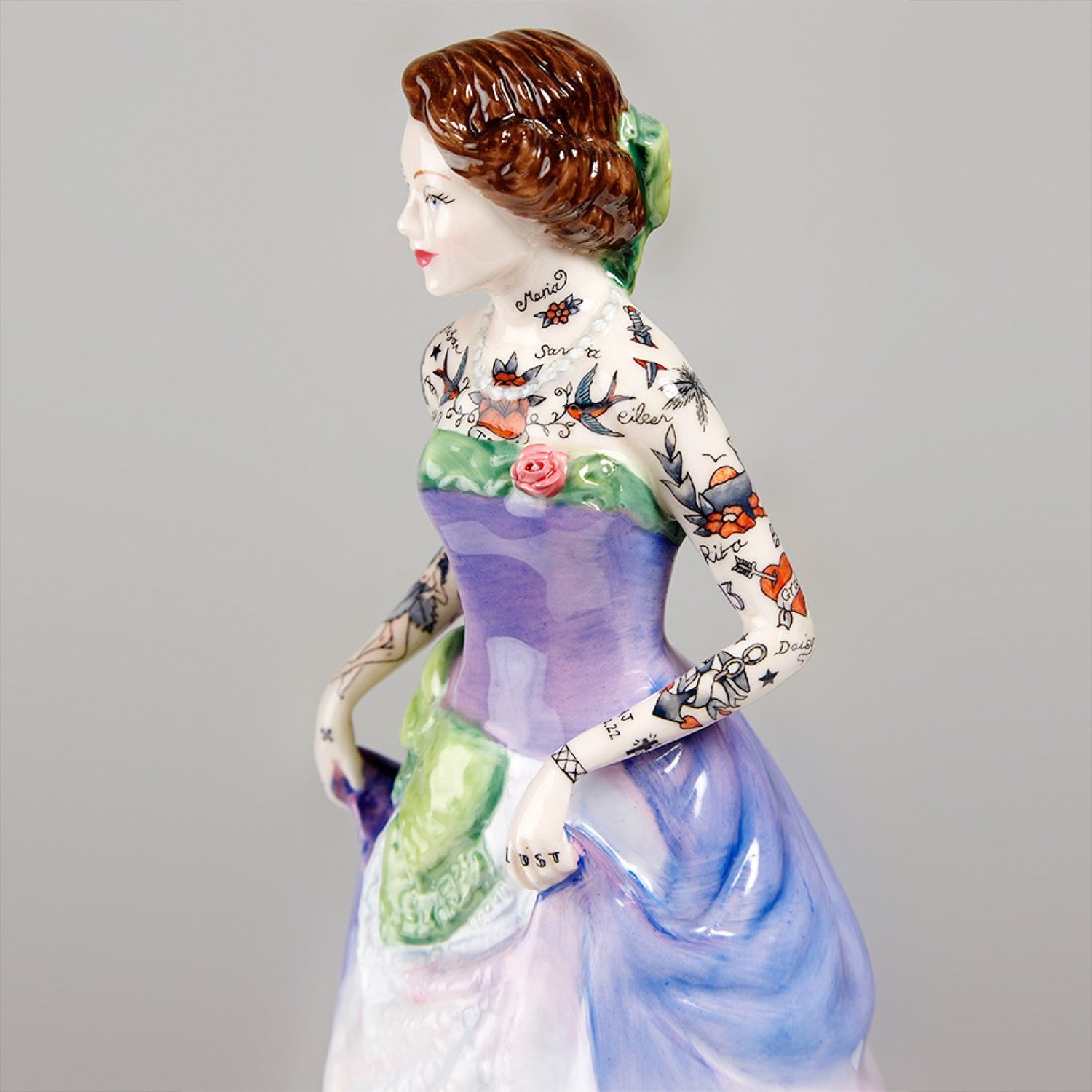 Jessica Harrison questions what the “idealized woman” really is.

Through Jessica Harrison‚Äôs dainty figurine sculptures, the concept of an ‚Äúideal‚Äù woman is turned on its head. They feature porcelain ladies wearing lavish ball gowns, and they seem like the antiques you‚Äôd find in your grandmother‚Äôs house. Harrison‚Äôs work, however, has one big difference: the fair-skinned women don full Sailor Jerry-inspired tattoo sleeves. With this simple-yet-monumental addition, the figurines completely change demeanor. Suddenly, these women have a harder edge to them, which forces us to reevaluate them and is in line with the overall concept of the artist‚Äôs work. ‚ÄúThe things she [Harrison] makes propose a re-imagining of these definitions,‚Äù she writes in a short statement, ‚Äúoffering an alternative shape to our perception of things, using the simplicity of materials to explore the complexity of the sensory body.‚Äù 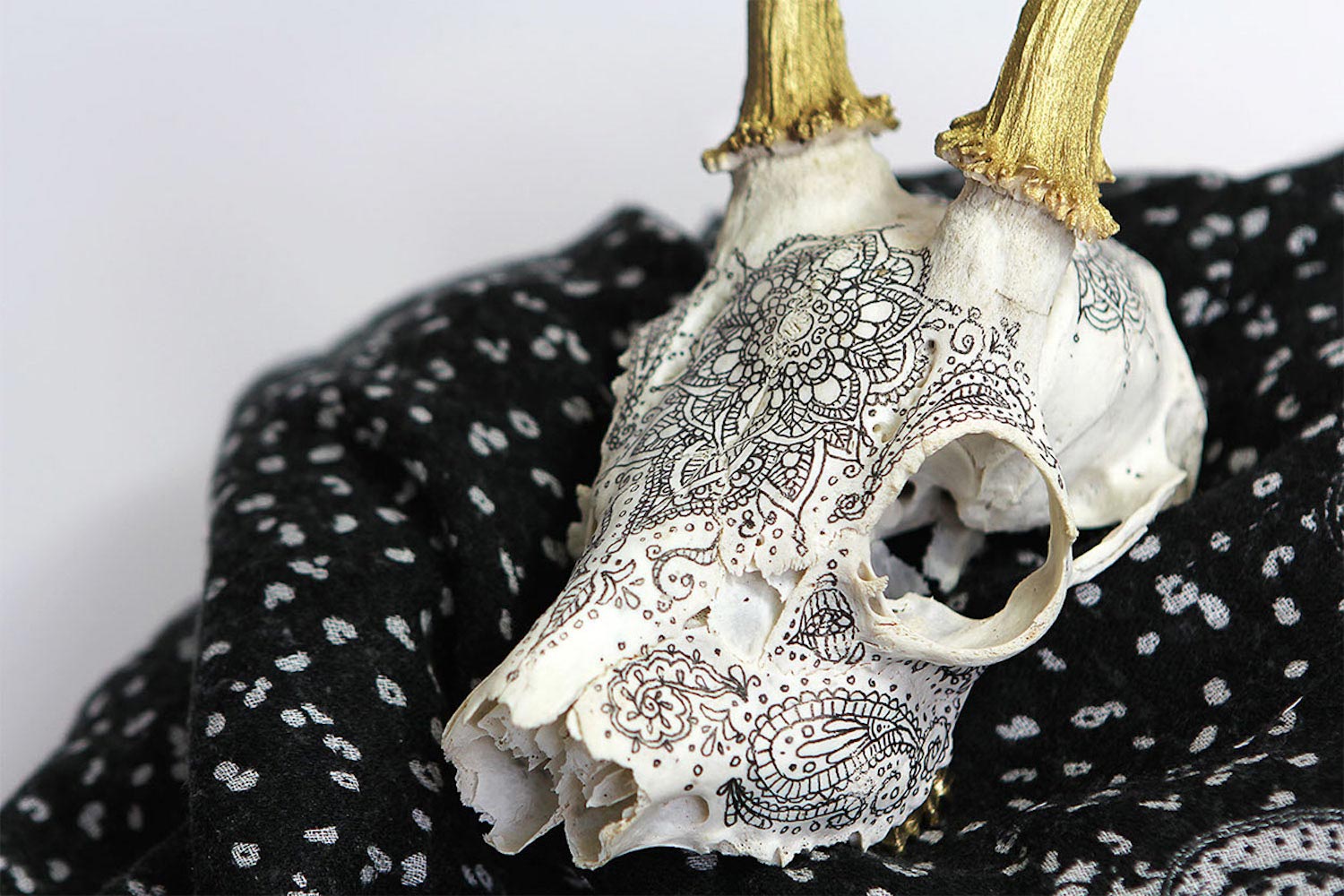 An animal skull is brought to life with intricate tattoos.

Tattoos are typically seen on flesh, but they look similarly as stunning on bone. Aline Cerisier has adorned an animal skull with paisley and mandala-like patterns, both of which‚Äîin their own ways‚Äîreference life. This is in direct conflict with the death and decay they’ve been tattooed on. Through these intricate designs, it‚Äôs as if Cerisier is attempting to infuse soul back into it. 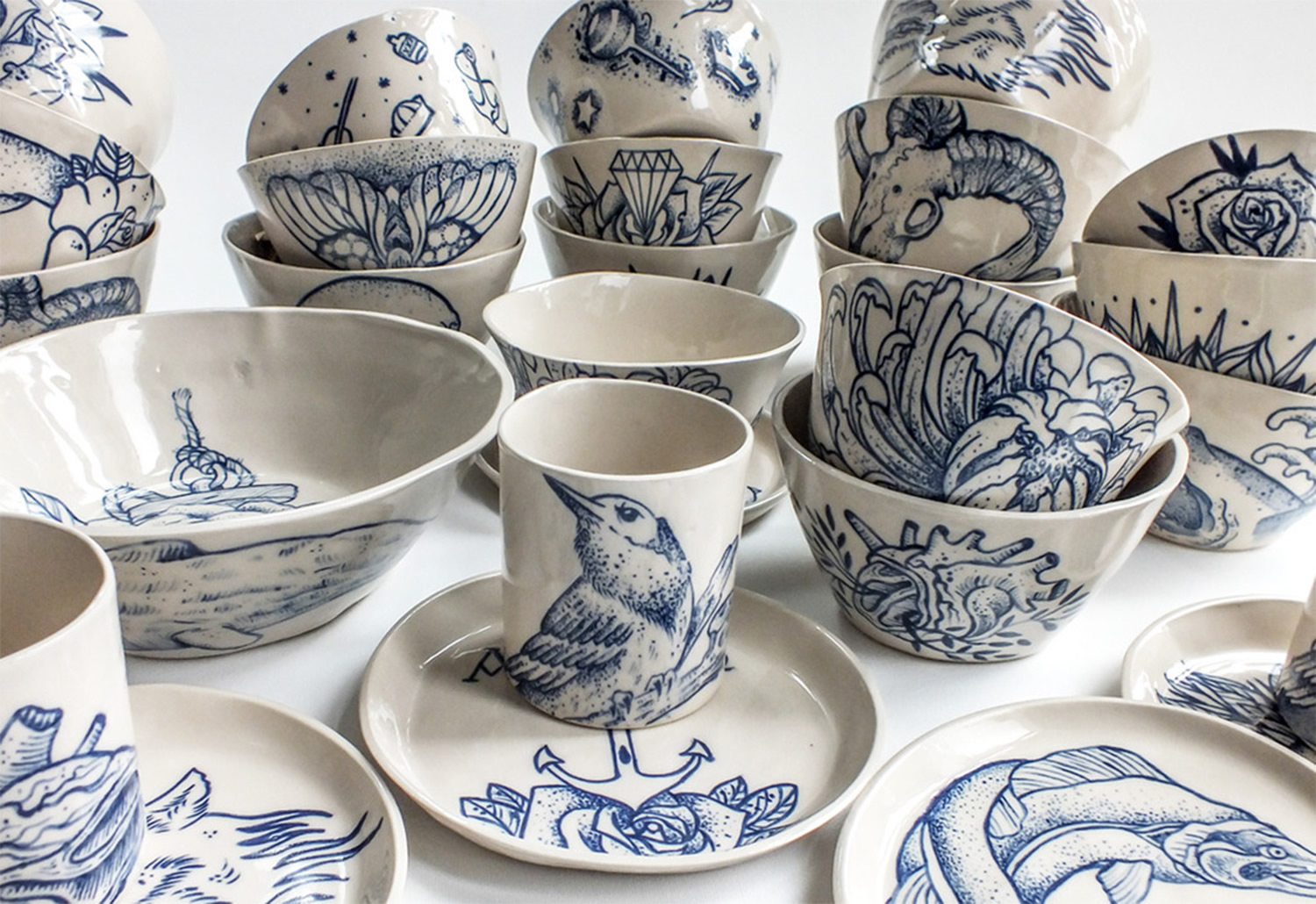 Ceramics by Antikapratika are part of their “Tattooed Ceramics Collection.”

The illustrative ceramics of Lucy Kirk have the distinct appearance of strongmen performers you‚Äôd see in an early 20th century circus. Their painted on muscles and tiny shorts are complemented by dark tattoos that cover their bodies, reinforcing the idea that they‚Äôre the type of people that were meant for these events‚Äîthose on the fringes of society. 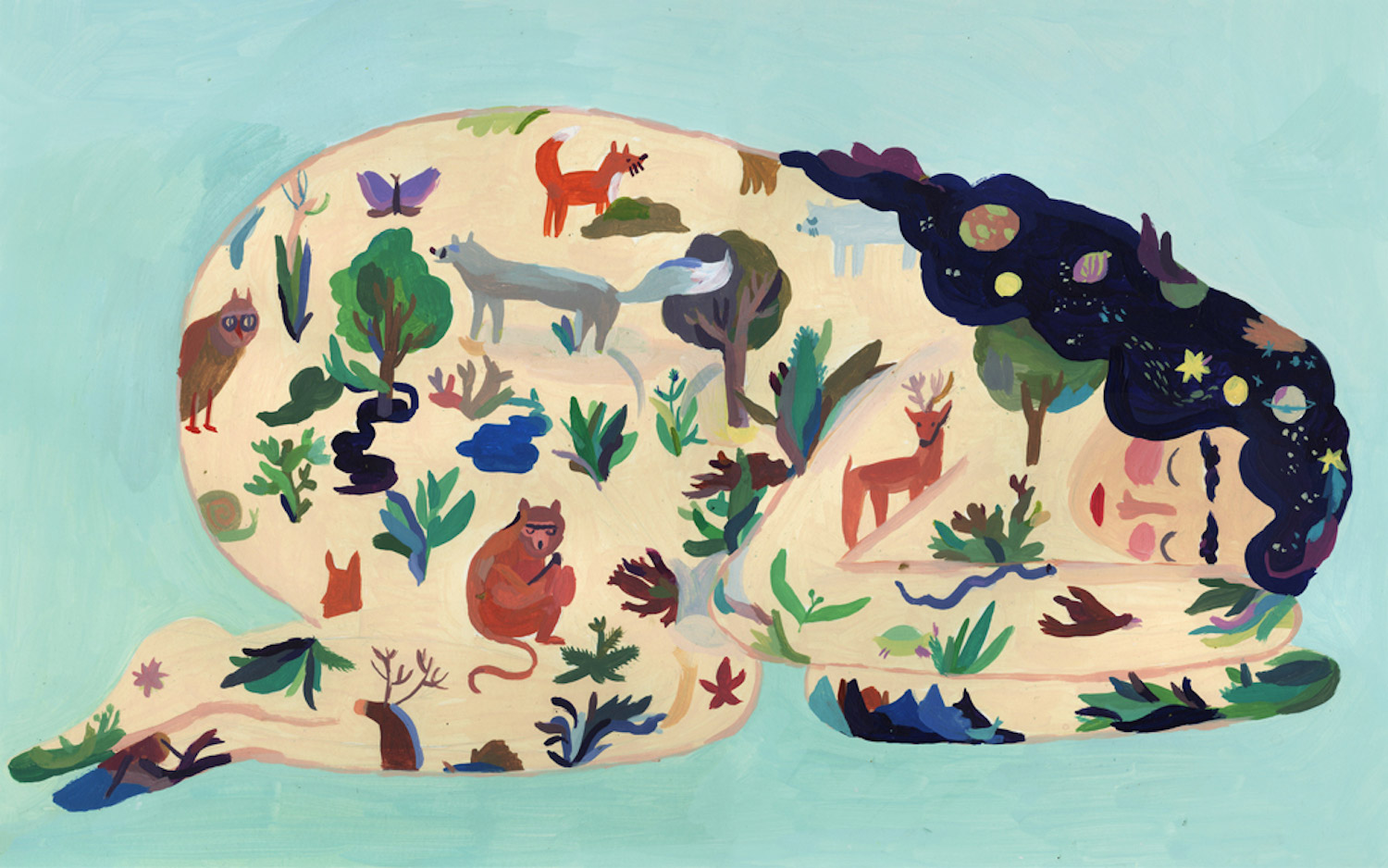 While this figure sleeps, the animal kingdom is alive.

The body is a canvas for tattoos, a notion that illustrator Akvile Magicdust explores in her surreal painting. Here, the entire human form hosts a sprawling landscape, where animals roam across legs and back, punctuated by the cosmos woven throughout the hair. Magicdust‚Äôs work ‚Äúconverts emotions to colors,‚Äù and she‚Äôs illustrated the feeling of having a strange and pleasant dream. 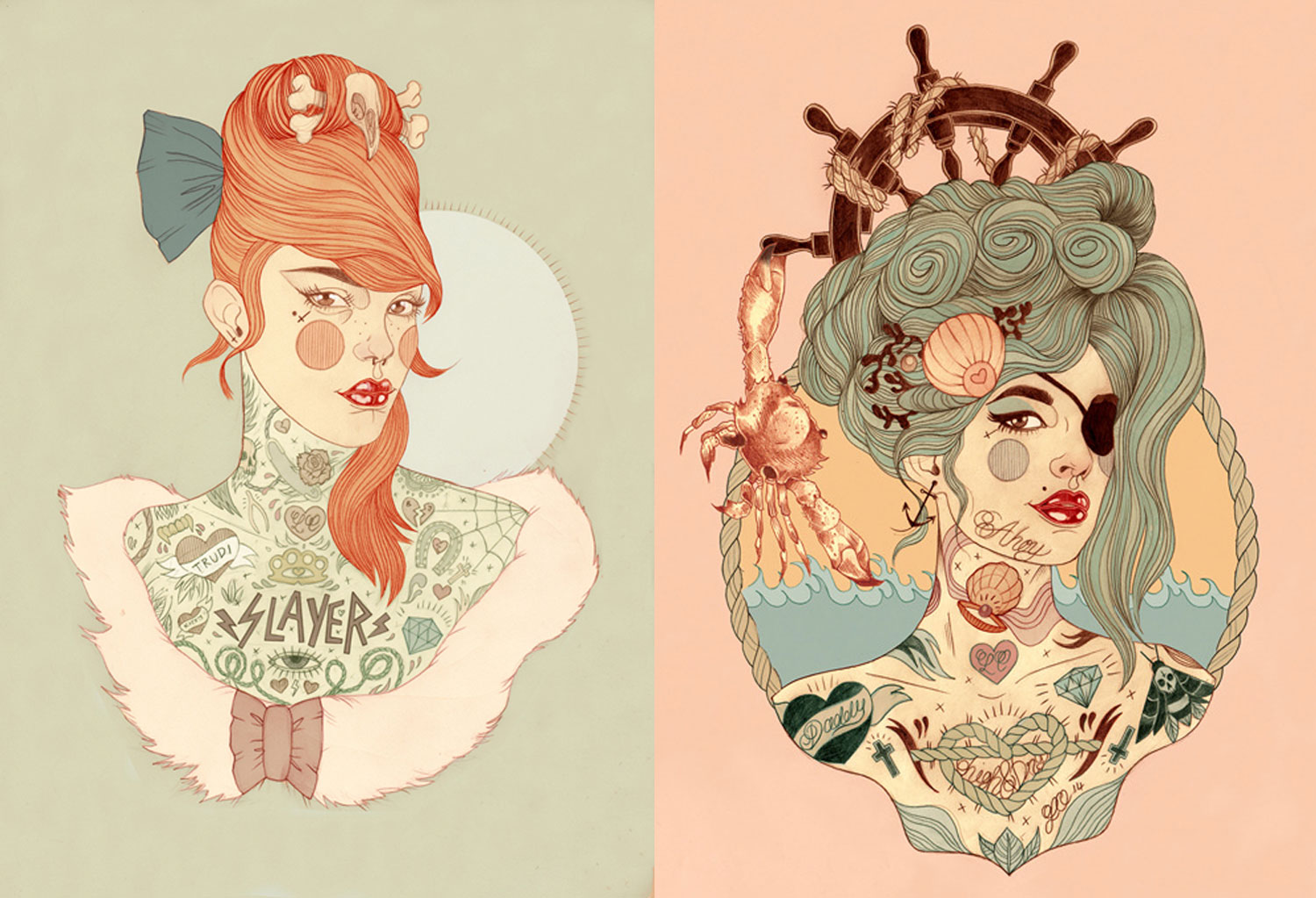 Tattoos give us additional information about Liz Clements’ characters.

London-based artist Liz Clements makes tattoos the main focus of her fashion and editorial illustrations. With hair piled high, Clement‚Äôs ladies are inked up and down their chests, necks, and occasionally, the face. The tattoos correspond to the overall style of the piece, touching on nautical symbols as well as metal music and gypsies. They‚Äôre an important part of Clements‚Äô character development‚Äîwith them, we‚Äôd have little idea of who these people are. 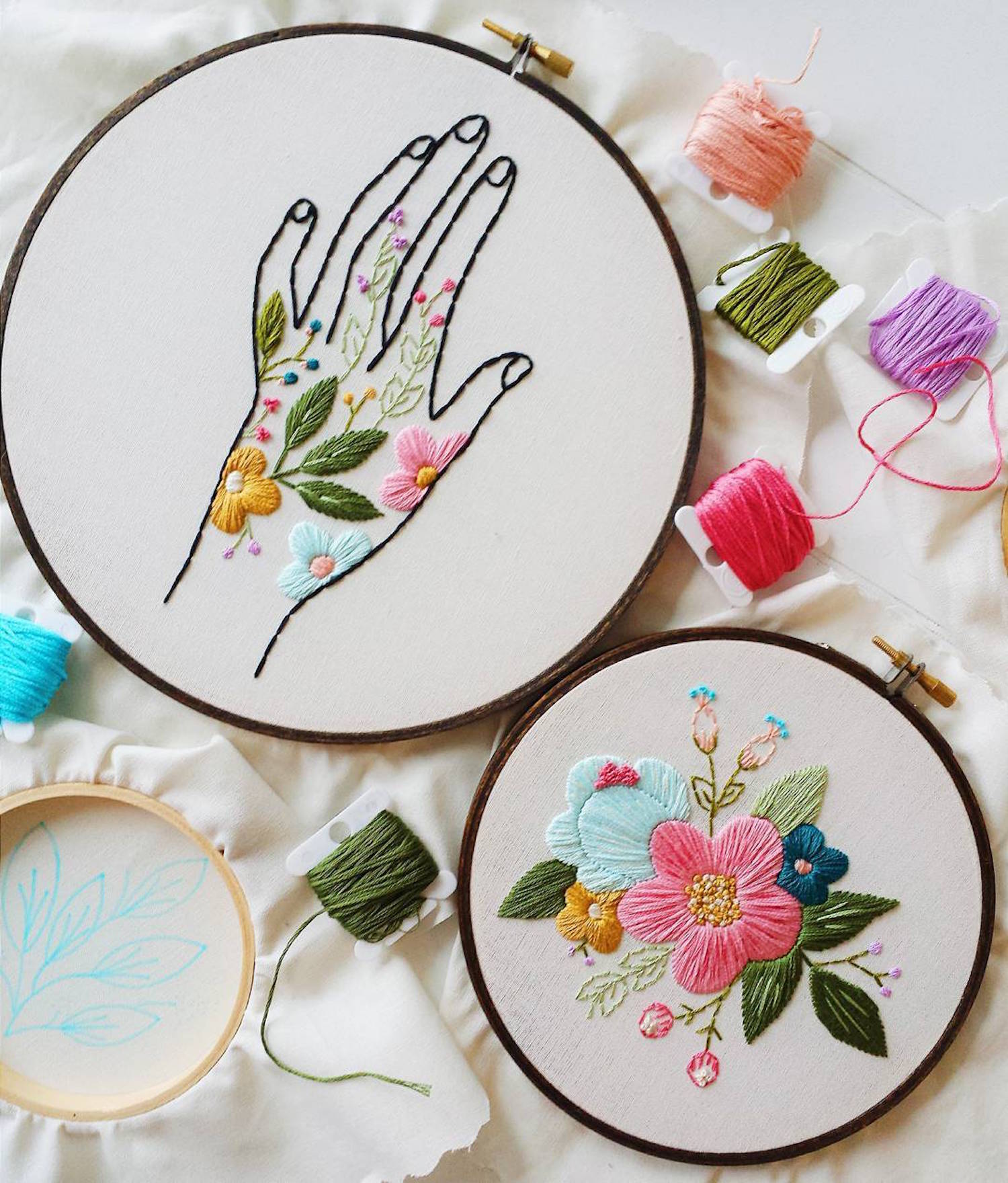 Florals are a common theme for embroidered hoop art‚Äîthe intricate stitches lend themselves well to exquisite blooms. Caitlin Benson, working under the name Cinder & Honey continues this trend while simultaneously commenting on another: illustrations of flowers as a popular tattoo design. ‚ÄúI believe flowers should last a lifetime,‚Äù Benson writes, ‚Äúand that’s why I stitch them!‚Äù 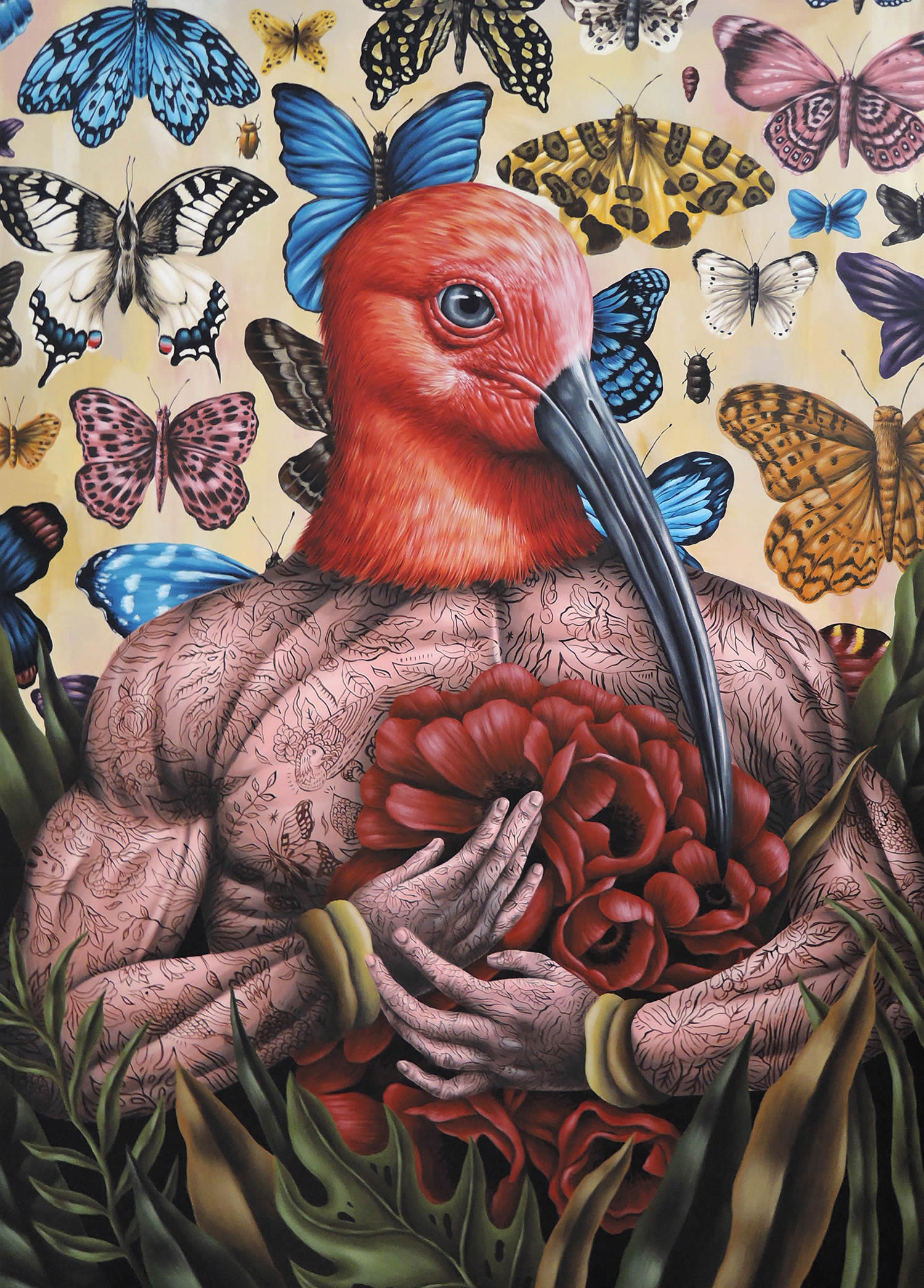 The tattoos that cover this hybrid bird/man reflect the character‚Äôs desire to be one with nature.

Artist Saddo created tattooed bird creatures for solo shows, ‚ÄúCoffins‚Äù (see cover image) and ‚ÄúStranger in the Garden.‚Äù The inspiration for ‚ÄúCoffins‚Äù came from his new home. ‚ÄúWe [he and the illustrator Aitch] had recently moved to Lisbon and the winter caught us by surprise,” Saddo wrote, “we didn‚Äôt expect it to be so rainy, gloomy, and depressing.‚Äù The change in weather altered his mood. ‚ÄúWe often felt trapped inside our dark, moist house, inside slow moving, joint aching bodies‚Äîand every once in a while, maybe more often than usual, a coffin would pop up in both our illustrations and paintings.‚Äù This, along with other strange figures would haunt Saddo‚Äôs affected mental state, which were expressed through his surreal paintings. 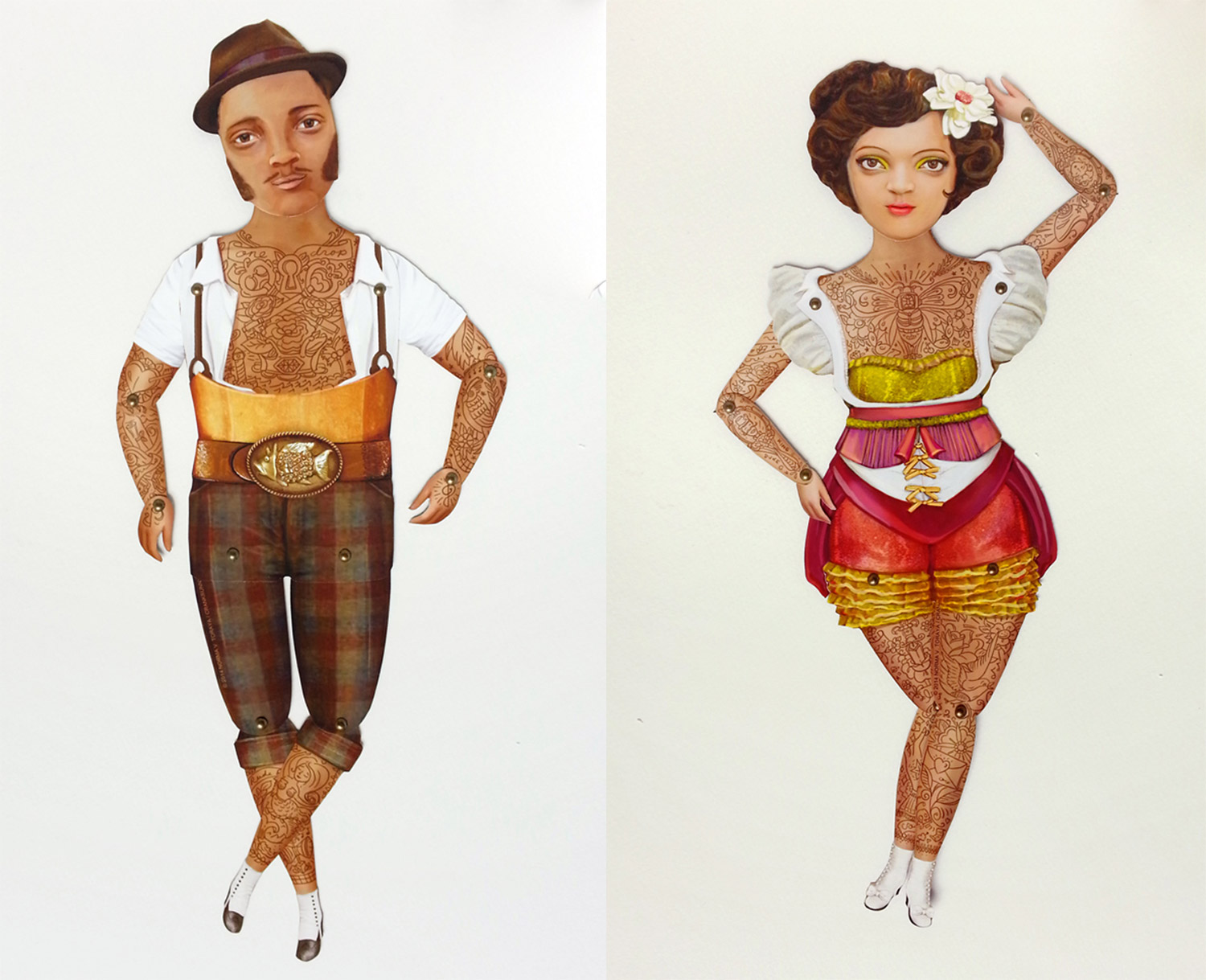 In addition to paper toys, Crankbunny is also an animator.

Crankbunny is the moniker for Norma V. Toraya, a paper artist that creates handmade toys and dolls. She finds inspiration in ‚Äúvintage ephemera and older mechanical toys,‚Äù and she recreates them while adding her own spin. They still have an aged feel and recall a time long past, but feel contemporary thanks to her illustrative style of full-figured bodies and large eyes.