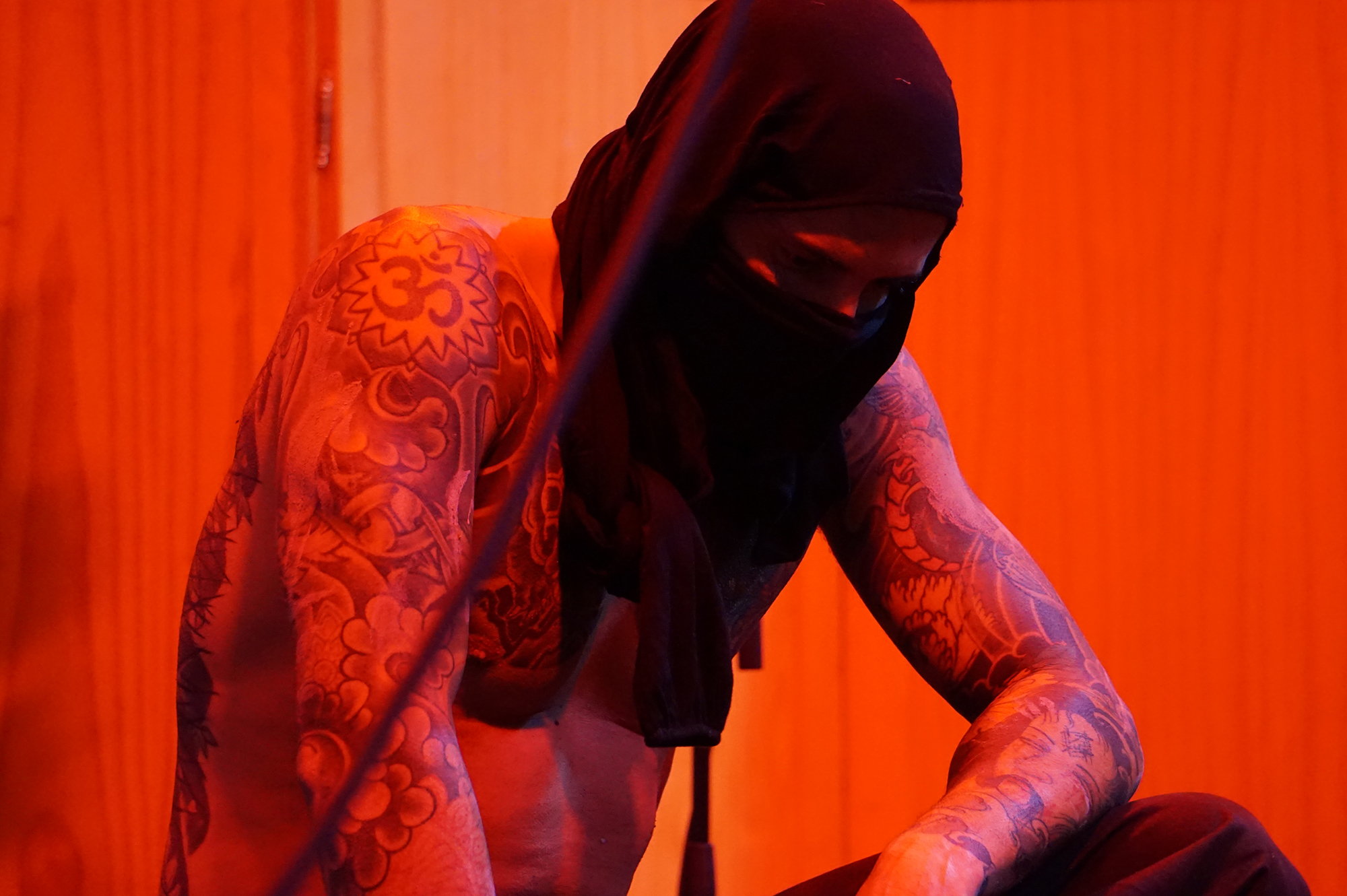 On the same weekend of â€śBlack Fridayâ€ť and barely weeks away from Christmas, the Lisbon Tattoo Rock Fest held its event on that long weekend at the â€śTejo Salaâ€ť conference building, which is annexed to the Altice Arena and with a beautiful view of the Tagus / Tejo river.

Entering the Lisbon Tattoo Rock Fest, there were immediate differences from 2018 â€” fewer tattooers in the convention space, and less spectators. The high cost of the booths was addressed by Portuguese tattooists, and the music on speakers during stage performances and tattoo contests was extremely loud, making it challenging for anyone to work. But, this specific convention has always been dedicated to â€śTattooâ€ť and â€śRock,â€ť so obviously music would be a part of it; however, it created a divide among spectators coming in for one thing or the other.

Above: One part of the â€śAscendusâ€ť body suspension performance. 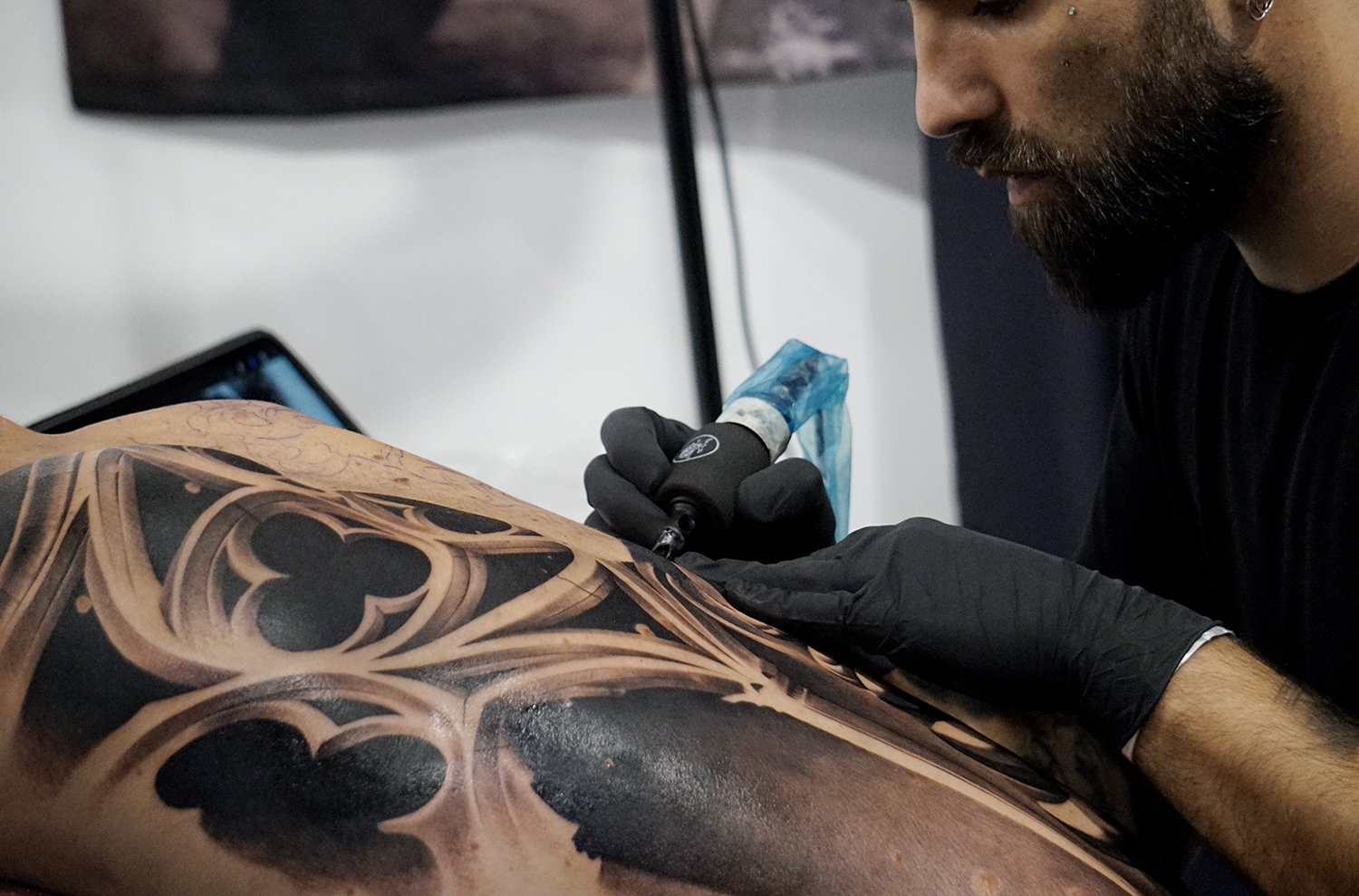 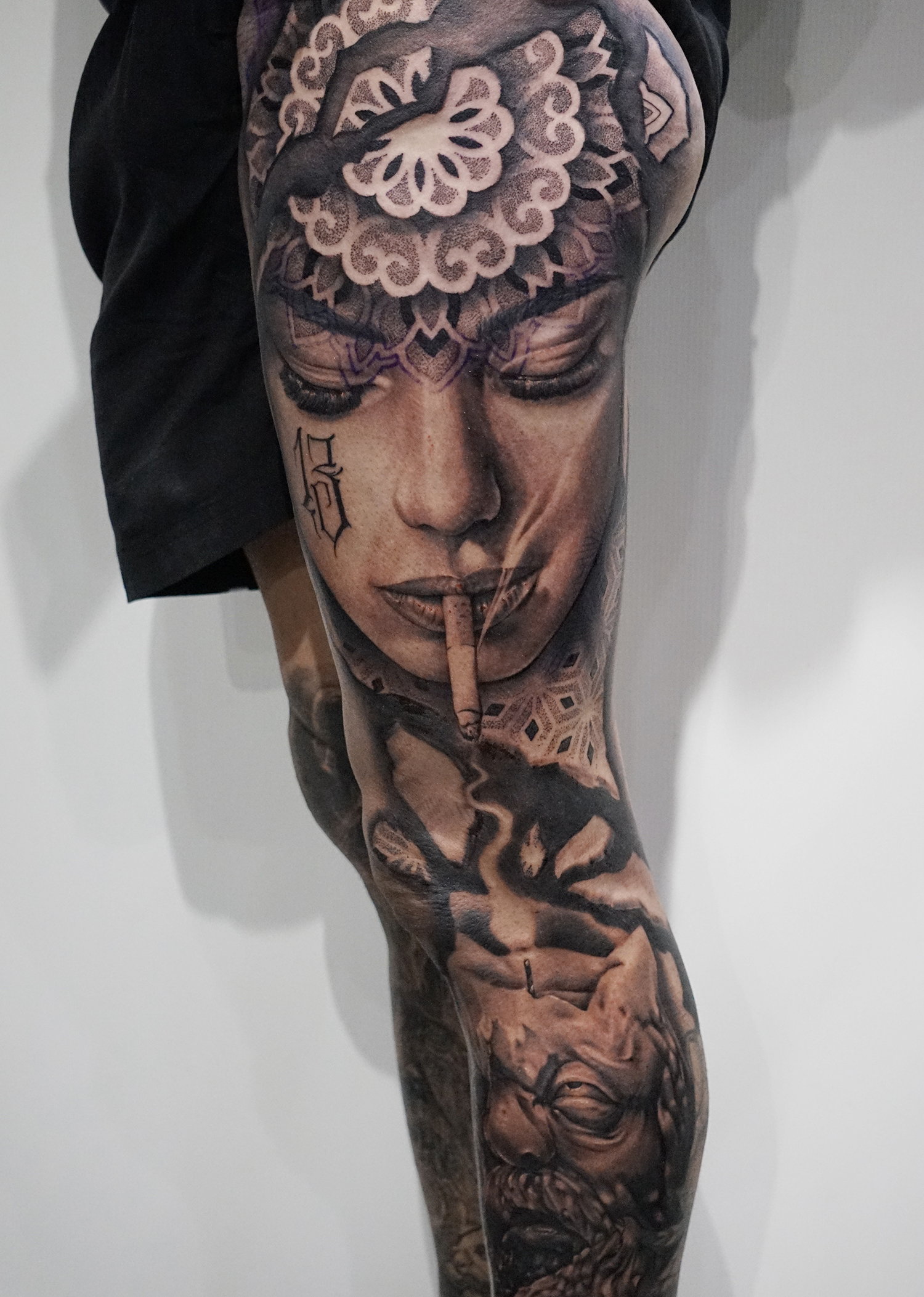 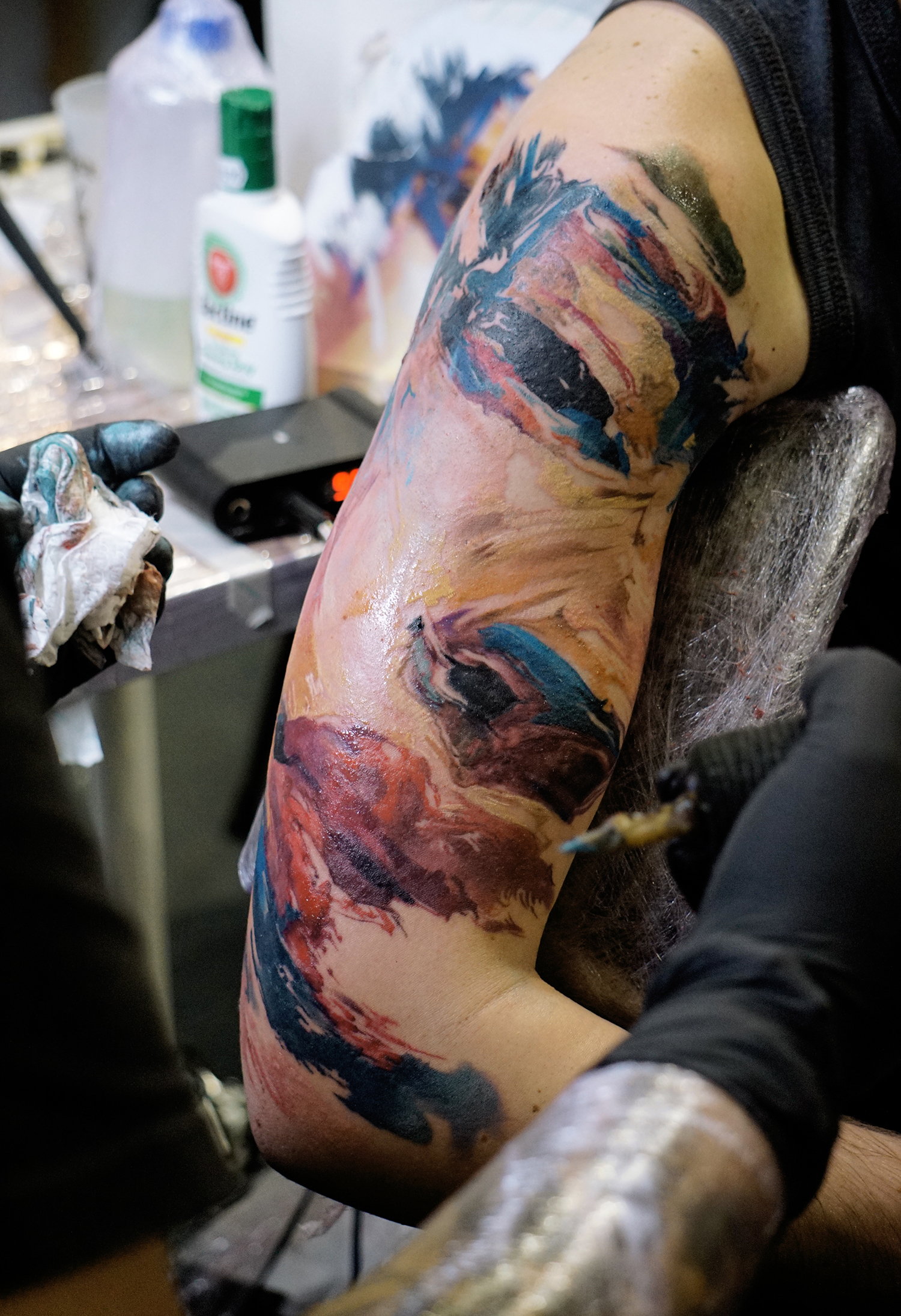 Top to bottom: 1) The work of Ruben Fernandes, 2) a collaborative leg tattoo by Joao Dias and Theo Pedrada, and 3) a stylized portrait by Diogo Aime Minhoto.

Focusing on what mattered to us: tattooing! We saw interesting body art by Andre Lucas, Juda, Ruben Fernandes, Marta Bala, Diogo Aime Minhoto, Mia Casquinho, and had in-depth conversations with Alexandre Abreu who was recently the subject-matter of an acclaimed Shawn Barber painting, Alberto Solposto who continued working on a two-year bodysuit project, Andy Kemp who charmed us with an ink-wash-painting-like tattoo, and Mauro Amaral who spent all-three-days pigmenting a sleeve. 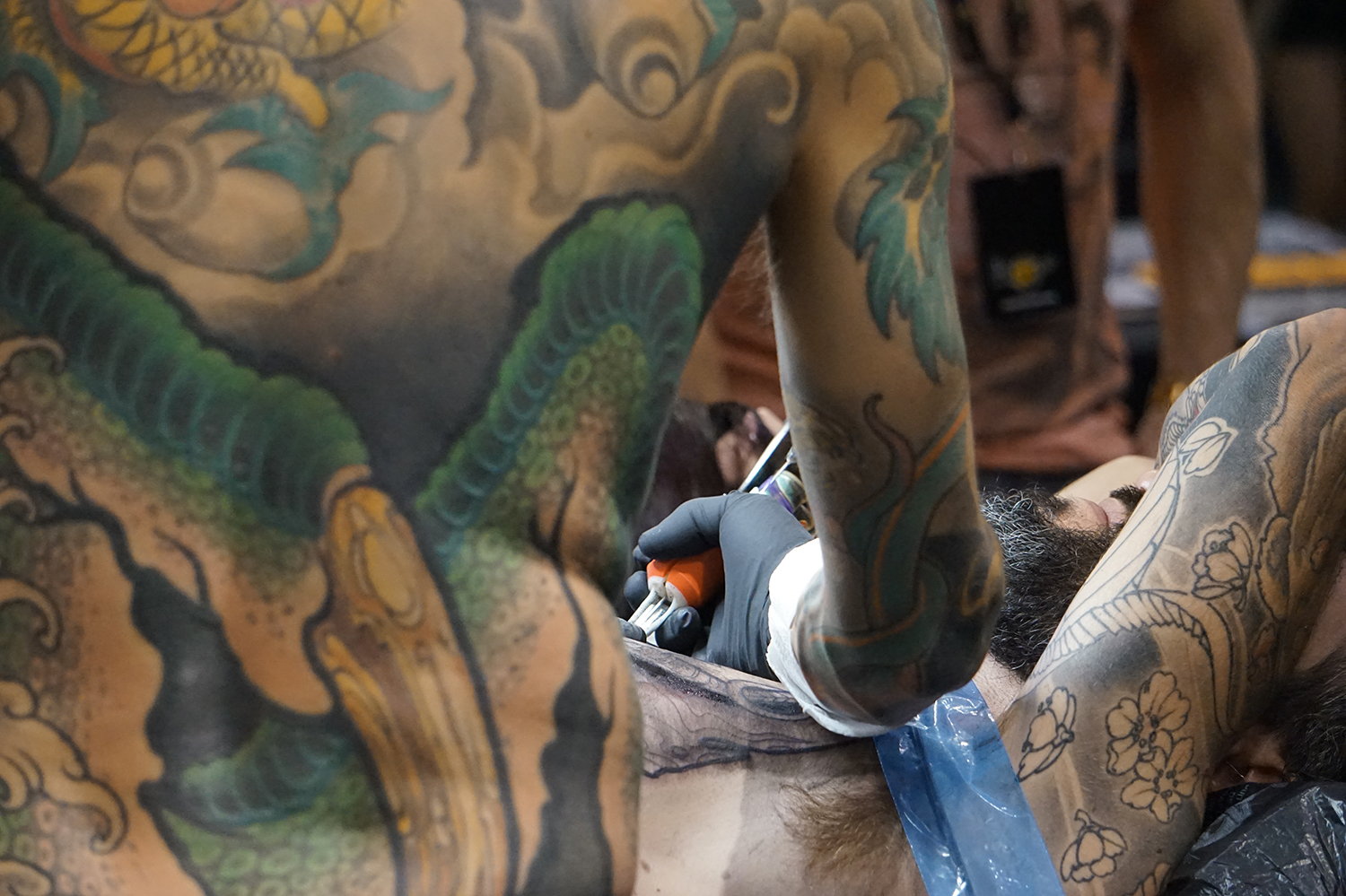 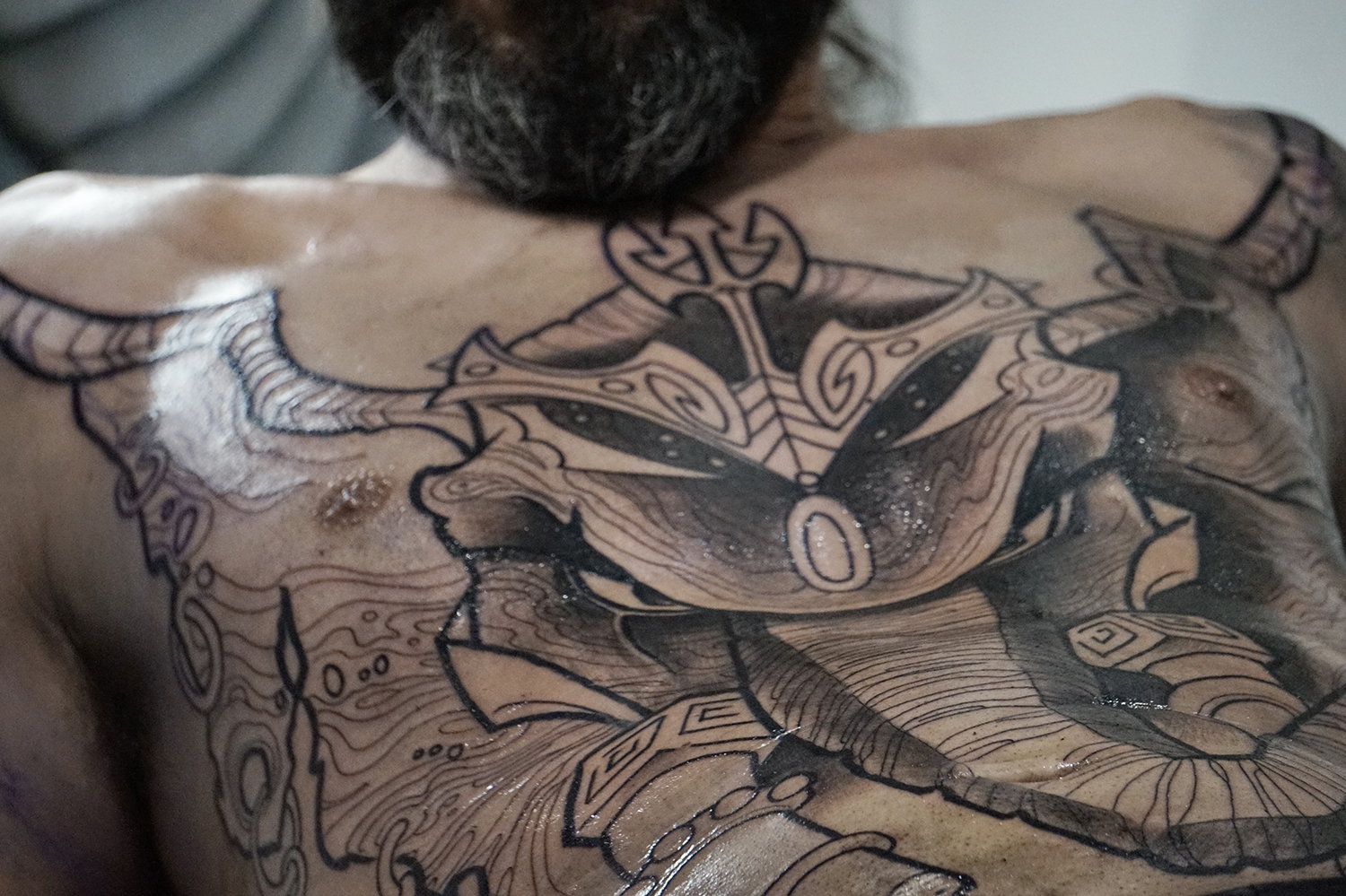 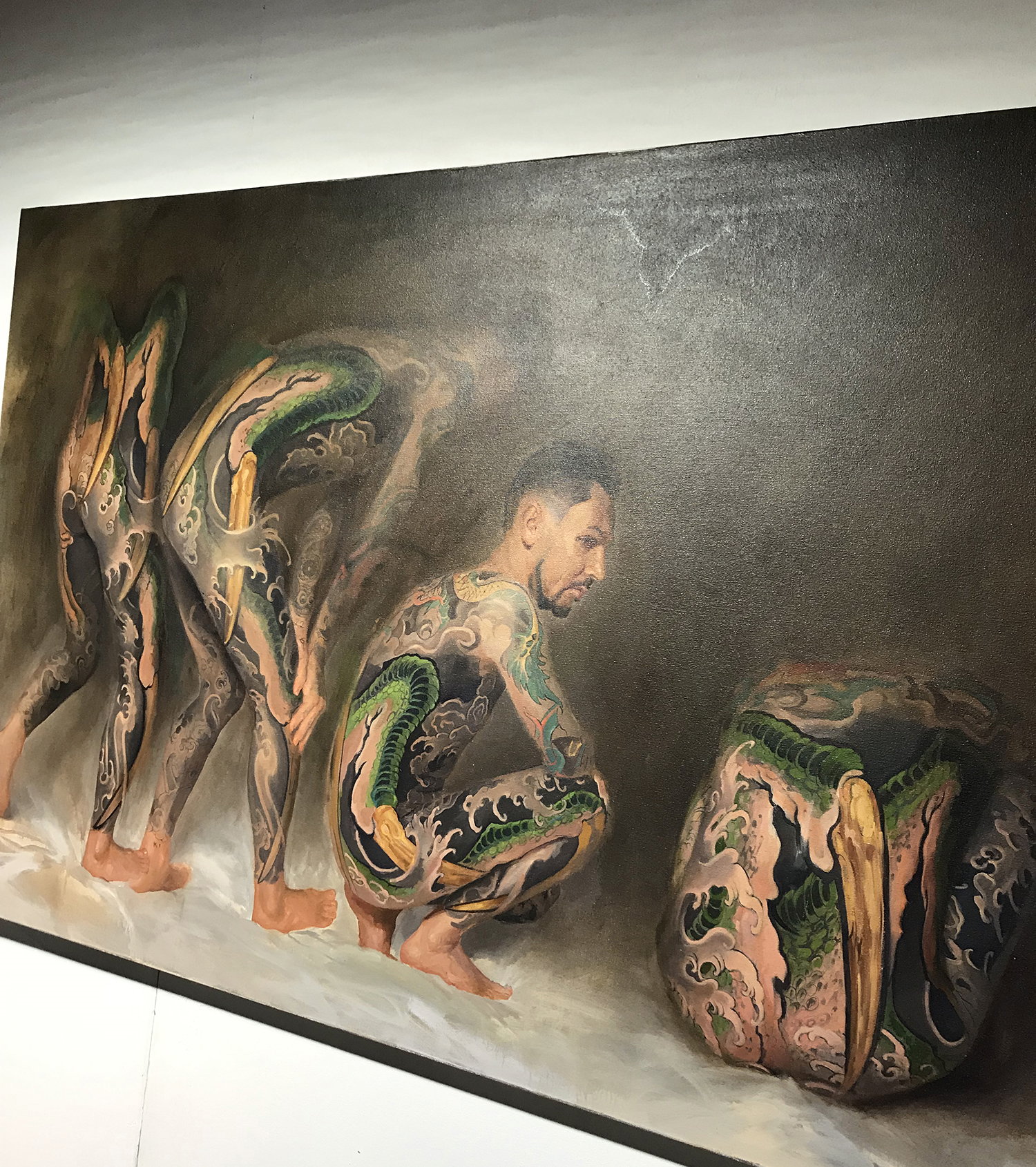 Renowned visual artist Shawn Barber did a painting of you and displayed it at the 15th London Tattoo Convention. What was the experience like being the subject?

How long did it take to get your whole body tattooed?

Between the two tattooers, it was seven sessions. They were really quick!

Your painting was hung next to Shawn Barberâ€™s art piece of legend Lyle Tuttle.

Yes, yes, yes! He made those paintings for the London Tattoo Convention. He made the portrait really nice of Lyle Tuttle. And I know he has another one full-of-details because he [knew Lyle] and was in his studio. There is also another painting in Lyle Tuttleâ€™s backyard. Itâ€™s a caravan, a gypsy caravan, in the backyard [sic]. I love it! Itâ€™s my favorite because Iâ€™m kind of gypsy too. When I was younger, I lived in the truck for like 10 years.

So, youâ€™ve kind of settled down from traveling?

I settled down. I have two children. I live in a small town in Portugal. It is called â€śLousĂŁ,â€ť up in the mountains. But I still go to lots of tattoo conventions. Last year, I was in Taiwan â€” a really nice experience in Asia. It was my first time there and I loved it. And then I went Japan. I did a tattoo convention in France (my friend organizes it).

Thereâ€™s a lot of events in France. Is it the Paris one?

Itâ€™s the first one. He made this one in 2005. It is in Nantes. It is quite big the Nantes Tattoo Convention in France. And itâ€™s a good tattoo convention. And I started with this one, and I never stopped. And now he make ones in Desalt, Paris, and London. And those are very nice.

You are recognized for your tattoo work, but now youâ€™re also known for what you have on your body because of that painting.

Yeah, itâ€™s funny because when I show the tattoo, people sometimes say, â€śOh, you have this one?â€ť They knew the [bodysuit] tattoo, but didnâ€™t know the guy who had it. So itâ€™s nice! 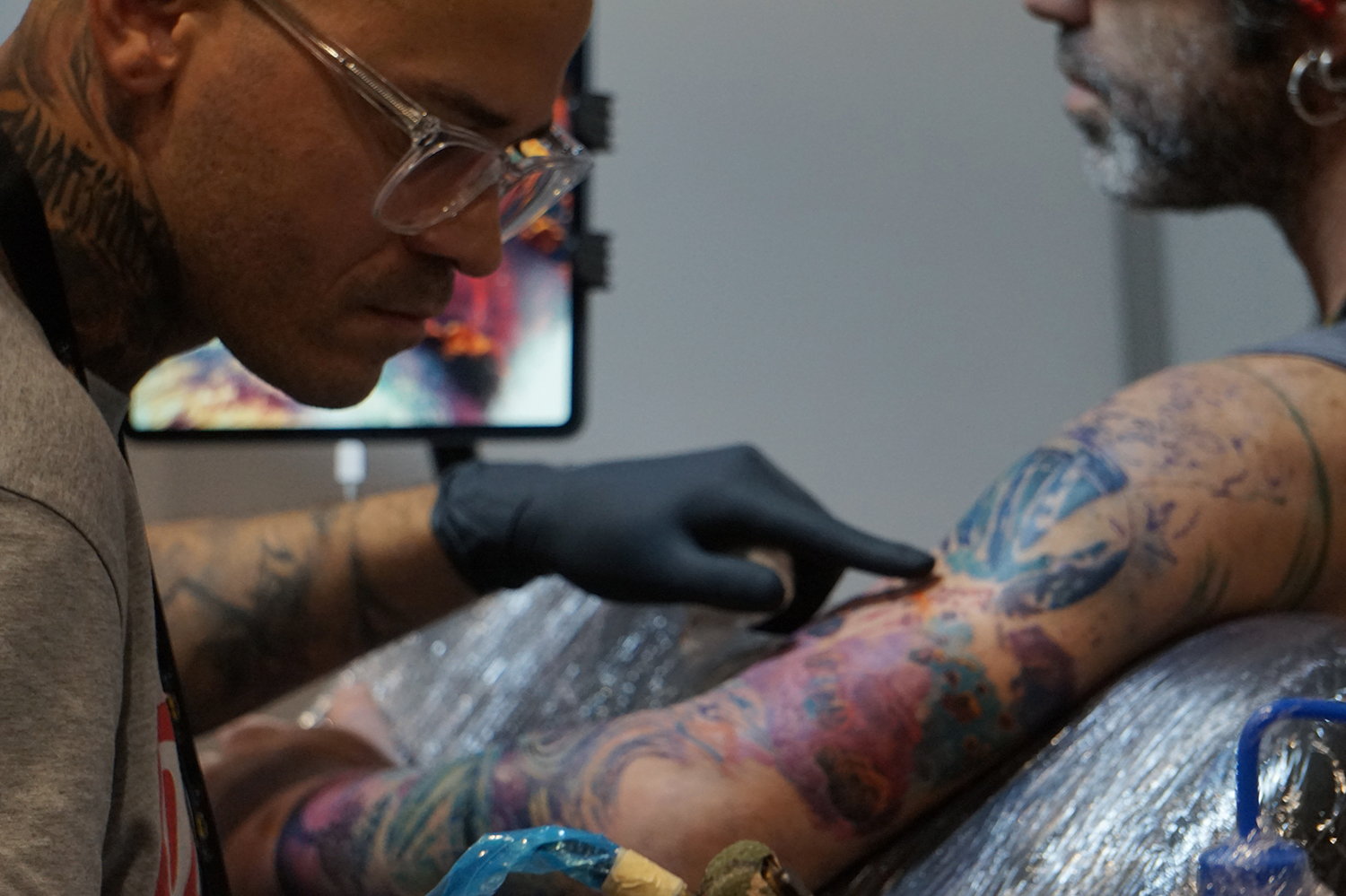 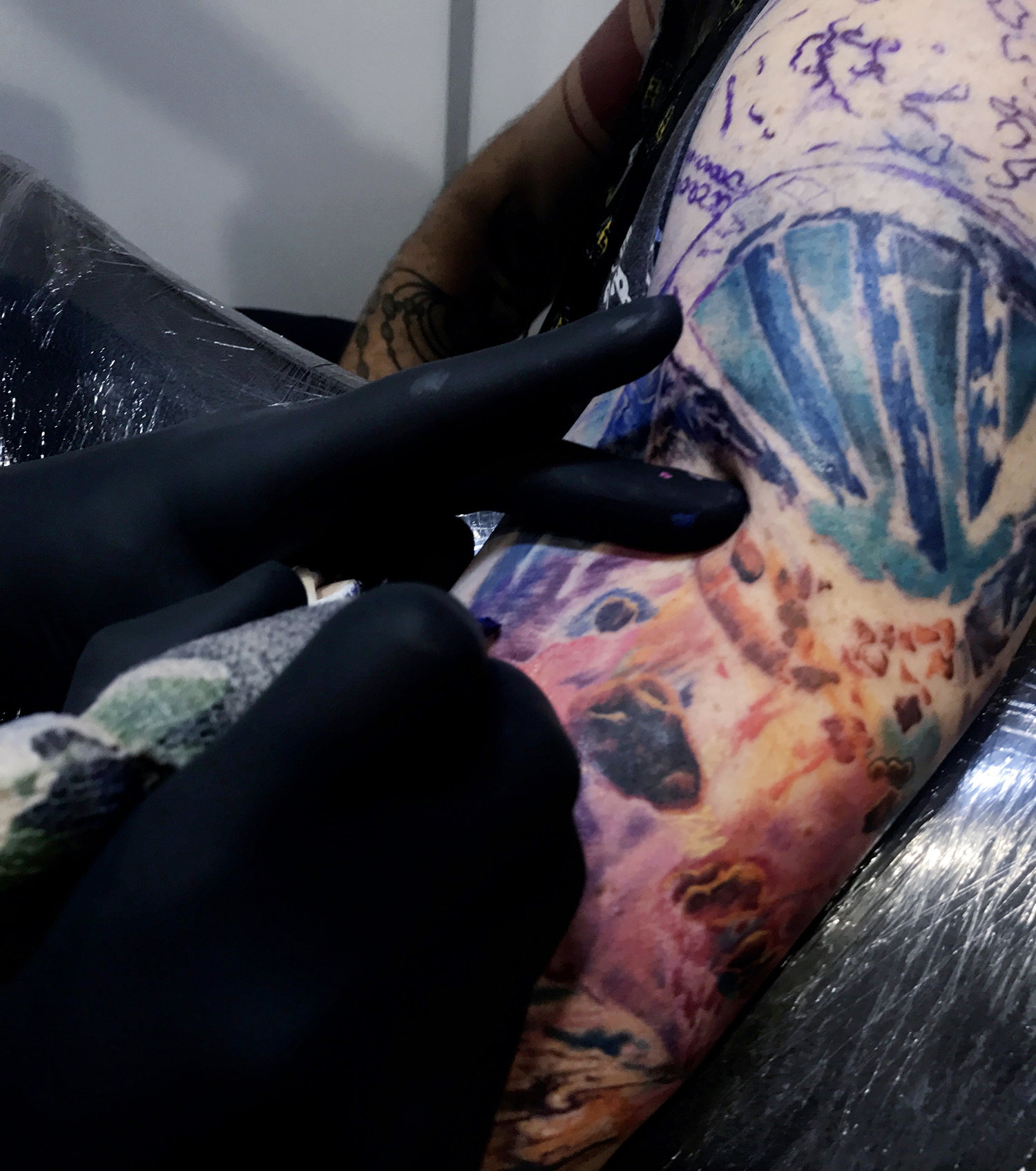 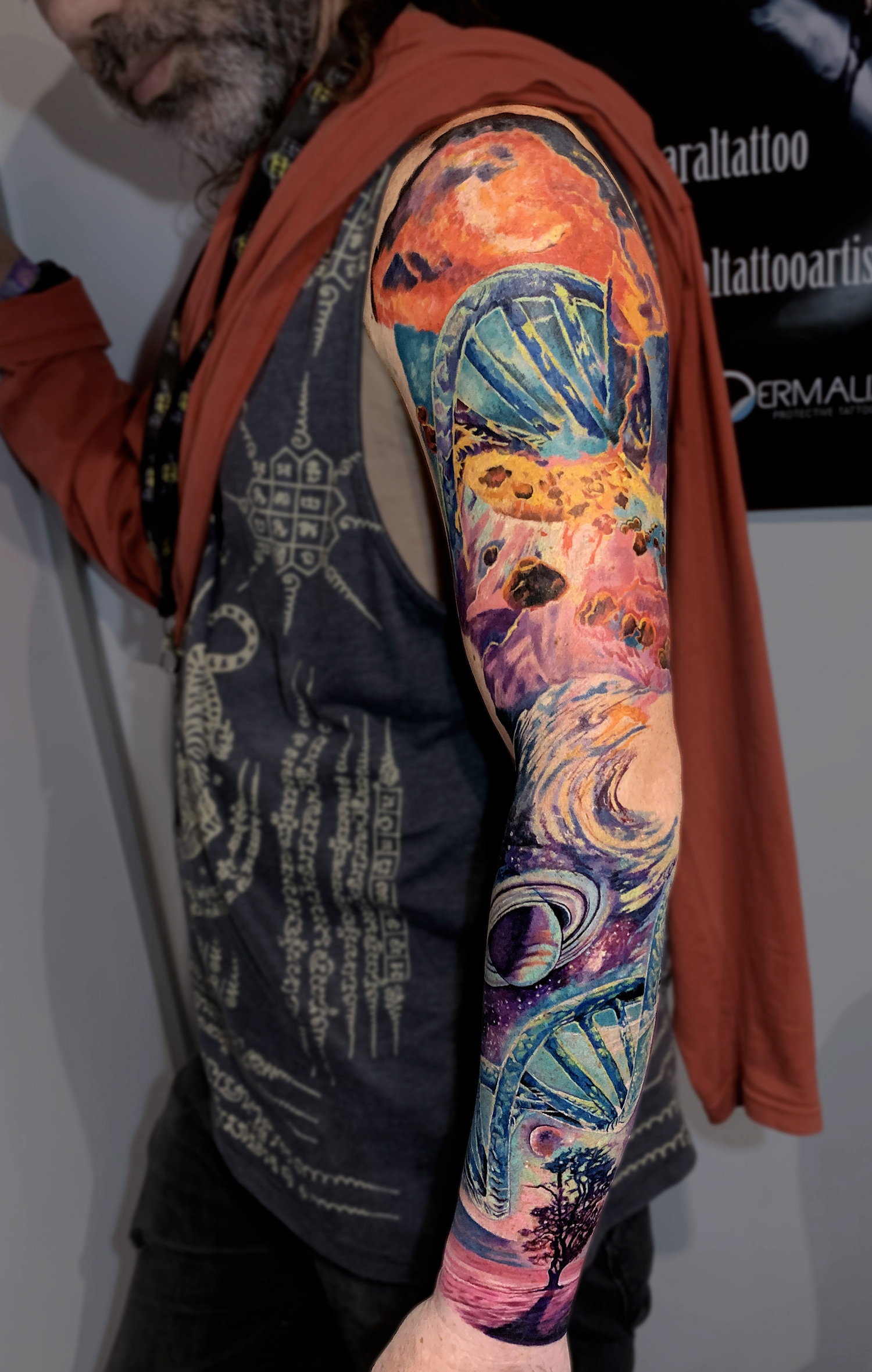 A look at the â€śBig Bangâ€ť sleeve (still to be finished) by Mauro Amaral.

The â€śBig Bangâ€ť â€” you are tattooing something different today.

Mauro Amaral: My old friend [client] was like, â€śNo bro, please donâ€™t put faces on me!â€ť I normally bring faces [portraiture] to the subjects of my projects. This time, I was already imagining aliens, UFOs, some cows getting abducted and stuff like that. I just got all the creation from the explosion of the Big Bang â€” adding that closer to the shoulder, and then going down [the arm] with the DNA and cosmic spirals and ending with a simple tree.

It does have a very abstract look to it.

Because youâ€™re looking closer at just one part. This is a zoom … a close-up right now of the explosion. There is the first planet that explodes, and for me, maybe you donâ€™t see that, but I see it a little bit like a Satanic moon, like a dark side of the moon â€¦ I like hiding some [visual] information.

How long do you think it will take to finish this whole tattoo sleeve?

At this convention, we are going to try to do the outside of the arm. Yesterday, I did the forearm in nine hours and today I have the top part … So from the elbow to the shoulder, I believe that itâ€™s take till 11pm tonight … I just hope the noise of [hardcore band] Madball doesnâ€™t â€¦ [pauses]

But as a total, how long, how many sessions?

Itâ€™ll take 21 hours [of tattooing] to show it here at this Lisbon show. Then going to my shop to make more â€” another three sessions to do the inside in a quieter and calmer [environment].

You are recognized for your photorealistic work, and recently using neon (kind of lighting effects). Is that your tendency for 2020?

No, no, no! When I started thinking about using neons, there were artists more famous than me doing the same thing. At the same time, when I was doing neons, [some] started doing them too. An important thing in my career is that I donâ€™t have a thing of creating a style. I normally do what my clients want, [i.e.] if I like their idea (with my techniques and if itâ€™s something that I will have fun doing). All my awards, and all the things I did in my life, were with a briefing from the client. I have never said â€śBro, do this. I have ideas.â€ť I do hide some stuff here and there [in the compositions], but I always follow the briefing of my client, or I just donâ€™t accept the work.

A few years ago we had spoken at the Setubal event, and you said that you were trying to do less saturated tattoos, but now, you are adding even more color to them. So whatâ€™s going on?

In Portugal, Iâ€™m still not doing colors. If you go to my shop, I never do colors. Most of the time Iâ€™m doing black and gray. I post a lot of colors [on Instagram], because I would love to do more color tattoos, but people just donâ€™t ask for it that much. I think there is this fashion, or a wave of black and gray right now. 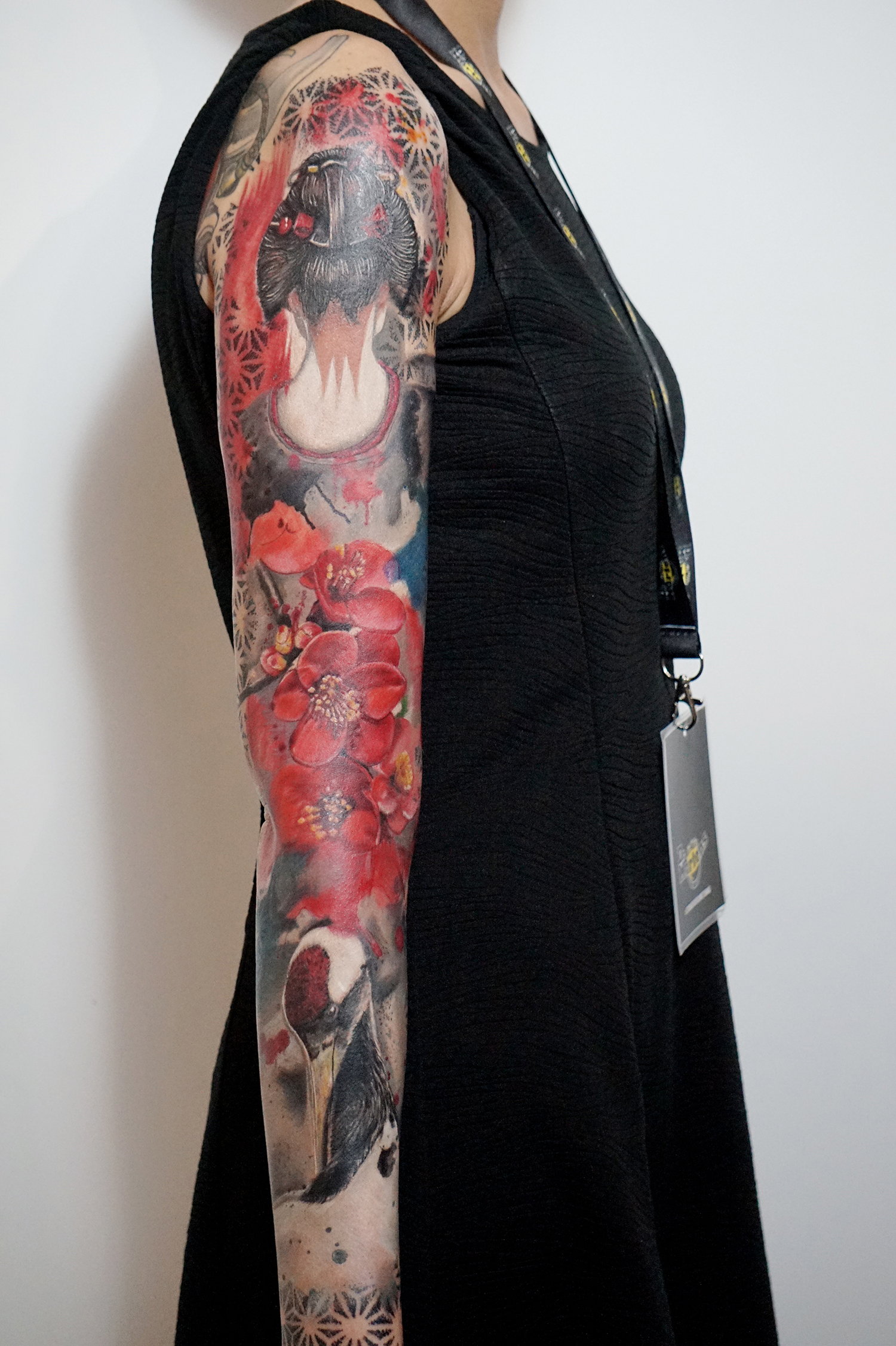 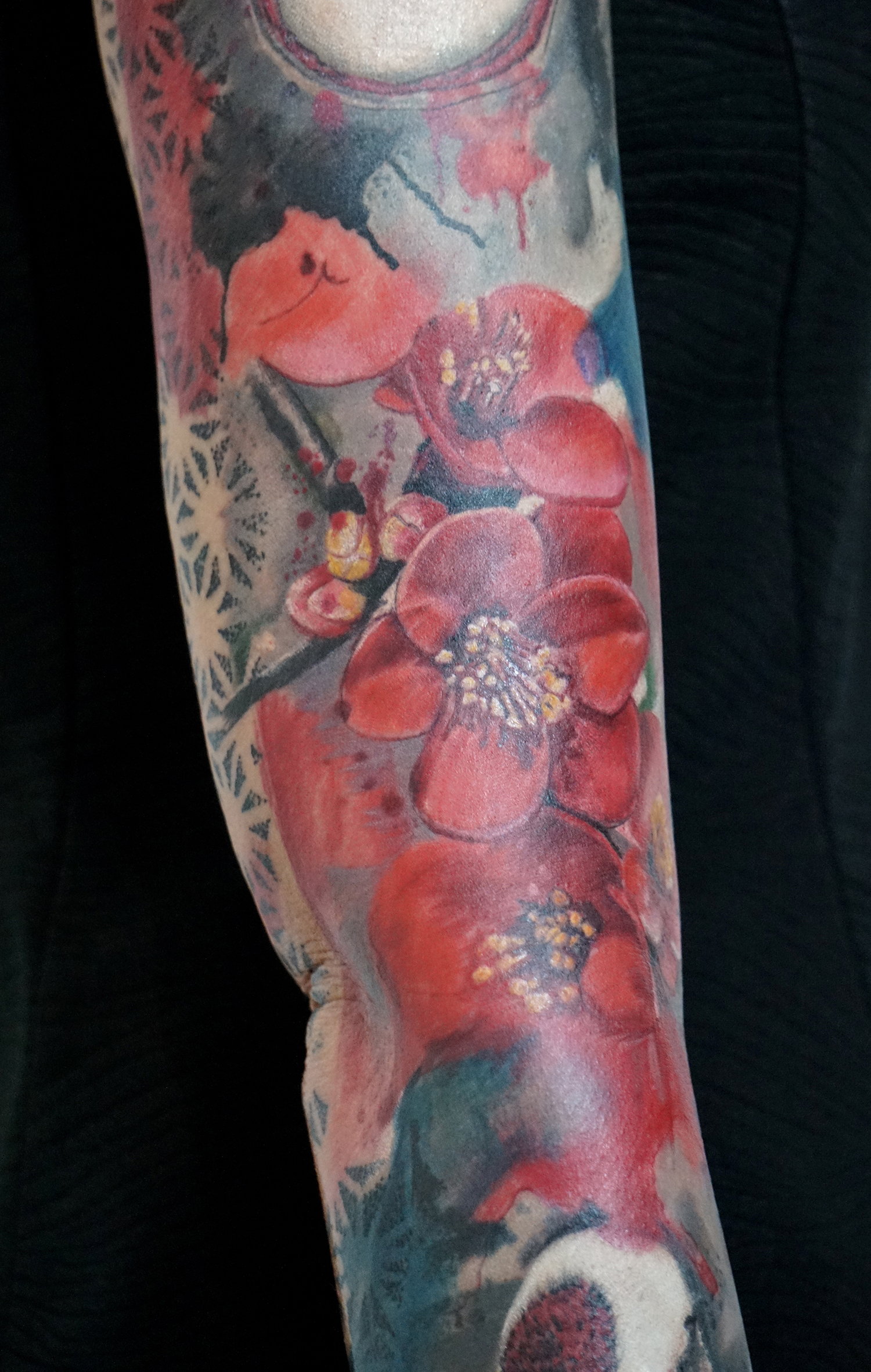 You completed this tattoo sleeve in two days, here in Lisbon.

Andy Kemp: Yeah. We started yesterday and finished up this afternoon. A lovely piece that me and Sandra have been working on for a couple of months now. Iâ€™m very inspired by traditional Japanese and Chinese watercolor paintings. Just a little nod to the history of a fine art and painting.

It is a standout tattoo at this event; quite unconventional.

Iâ€™m formally trained in fine arts, so bridging the gap between fine art and tattoo has been something that Iâ€™ve been passionate about from the-first-day-I-had-a-tattoo-machine in my hand. This style, Iâ€™ve been developing for the last three-and-a-half years, and finally got to a stage that Iâ€™m very happy with. (The way things are composed, and the compositions tend to be a lot easier to develop and create now.) I just love the way I can play with different textures and techniques to create something that is very unique and different from everybody else.

Tattooing has been on the radar of some art galleries and museums. Have you tried to approach some of these institutes to exhibit your work?

Portugal is a little bit closed with that still, unfortunately. One of my ambitions for the 2020 is to start reaching out a lot more and going into Northern Europe, doing some conventions up there, try and get a bit more of a contact, connections in that kind of area. But yeah, itâ€™s definitely an area of opportunity and itâ€™s something that I will be looking into.

You also do traditional paintings.

I do. I donâ€™t have much time for it. Well, thankfully, it depends on your point of view, but yeah, I do some canvas work when I can. 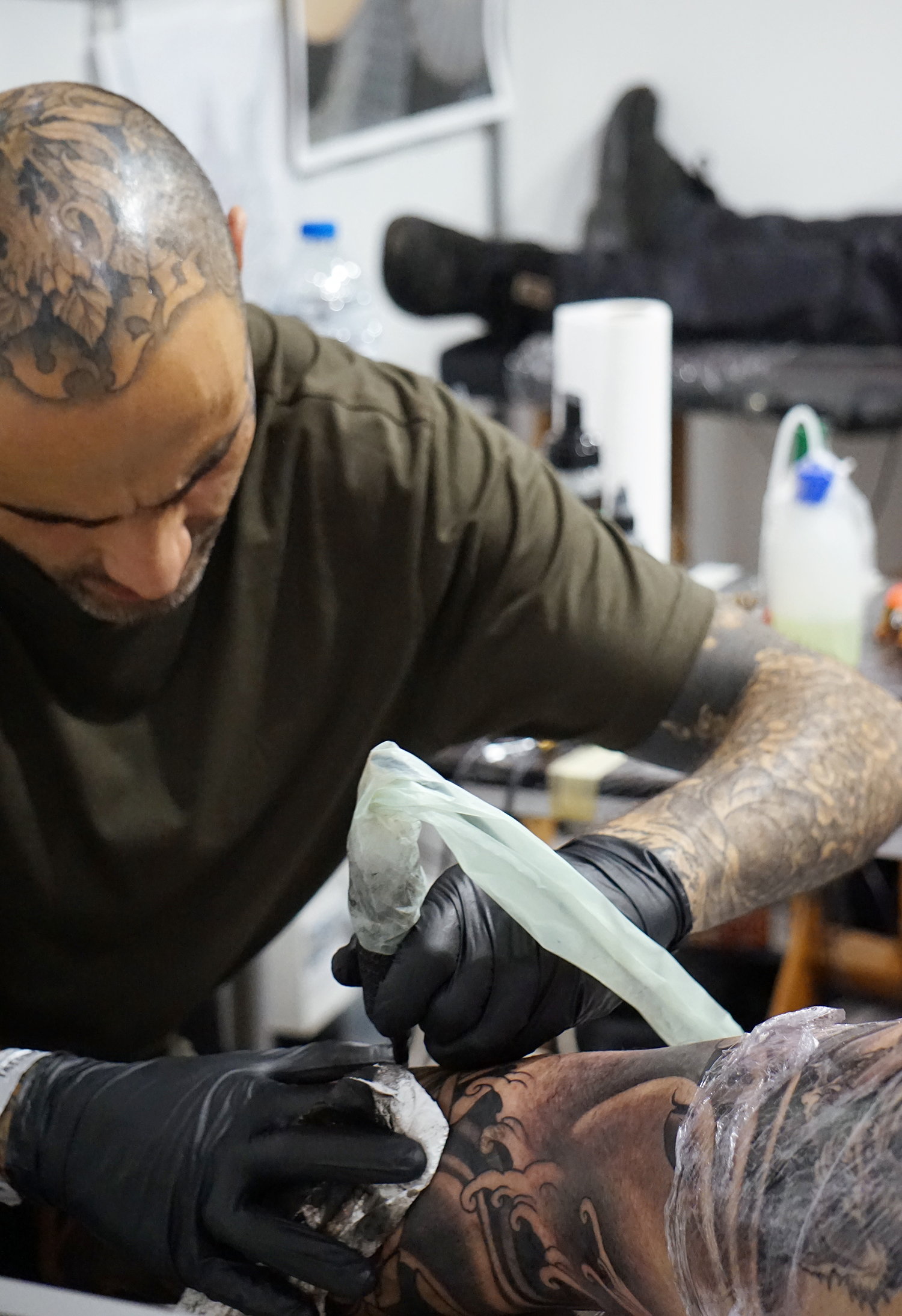 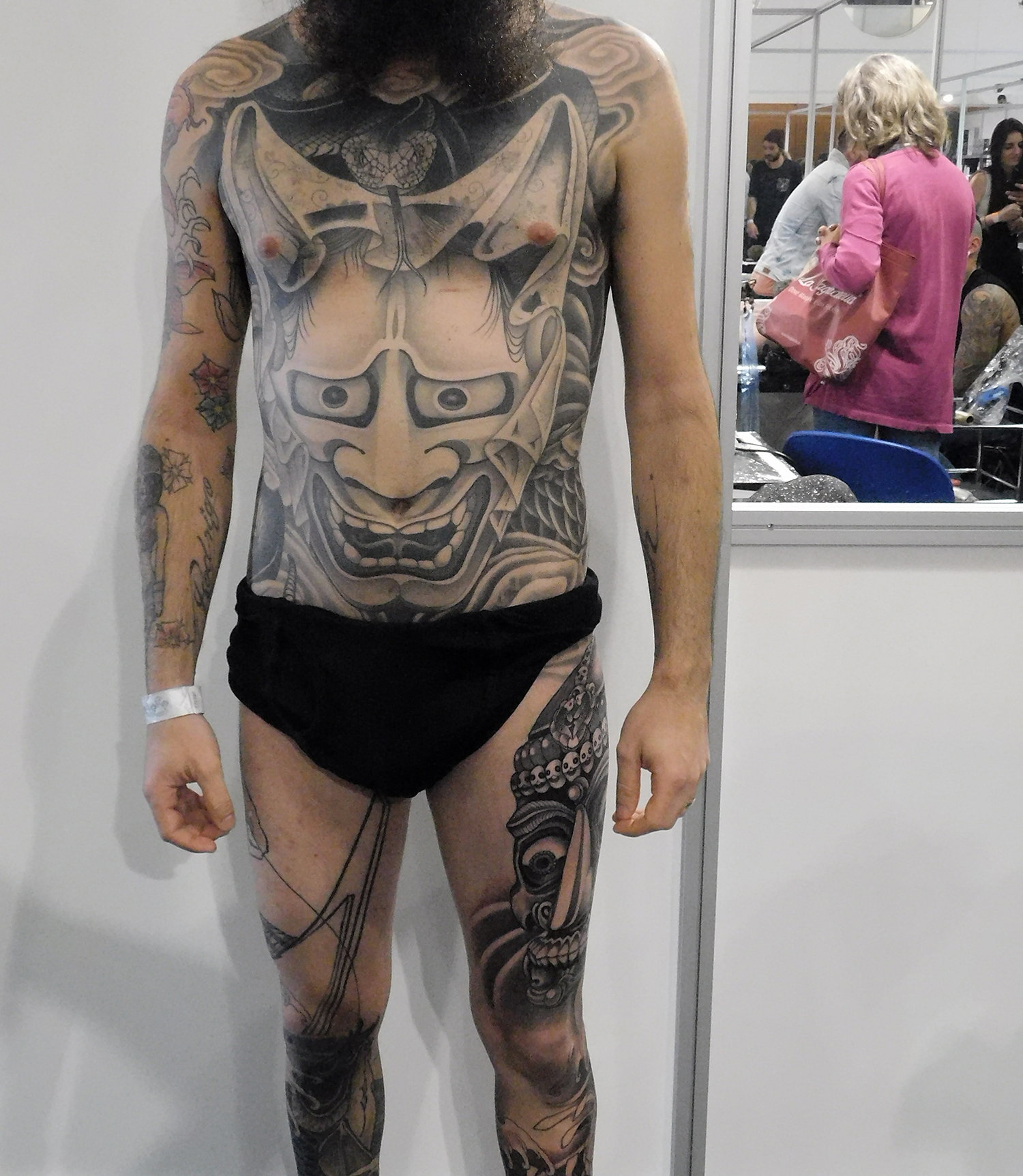 A bodysuit that is still in development, already two years in the making by Alberto Solposto.

Please talk about the bodysuit you have been developing for two years on your client Joao Lopes.

Alberto Solposto: It started with Joaoâ€™s back, he asked me for a dragon [design], and I replied, â€śDo you want another dragon like all the others? Or do you want a dragon tattoo that you can see like 10 meters away?â€ť The client didnâ€™t even hesitate and let me work in the size I thought would be ideal [for him]. We ended up bringing this scale of elements to the rest of the body â€” always with the aim of creating great [visual] impact and that the elements could be easily read from far and near (with smaller elements and textures as the viewer approaches it). A project of this dimension is a giant level of commitment â€” both for the client and tattoo artist. I have been lucky that Joao can not only handle the whole process of tattooing, but wants to make constant progress of his bodysuit.

At this event, you have been inking Joaoâ€™s leg. Explain about your progress and inspiration for this piece.

Initially, I was just going to do the Kapala (Tibetan skull) on the upper leg. But Joao showed huge resilience once again, and the next day, I made more progress on the lower leg with water element and Chrysanthemum. The inspirations (and references) of my work come from classical bases of Japanese, Chinese, Indian, Tibetan painting and illustration, as well as tattooing of Filip Leu, Ichibay, Pino Cafaro, Grime…

You are tattooing in the booth next to Alexandre Abreu, who you seem to be getting along with. How long have you known him?

I have known Alexâ€™s work for a few years now, through social media channels, but personally I just had the pleasure of meeting him last year on his way to the tattoo expo, Taiwan I Love Tattoo. We quickly established a good relationship â€” he is a calm person, good energy, and has much knowledge of the tattoo world and stories to share. 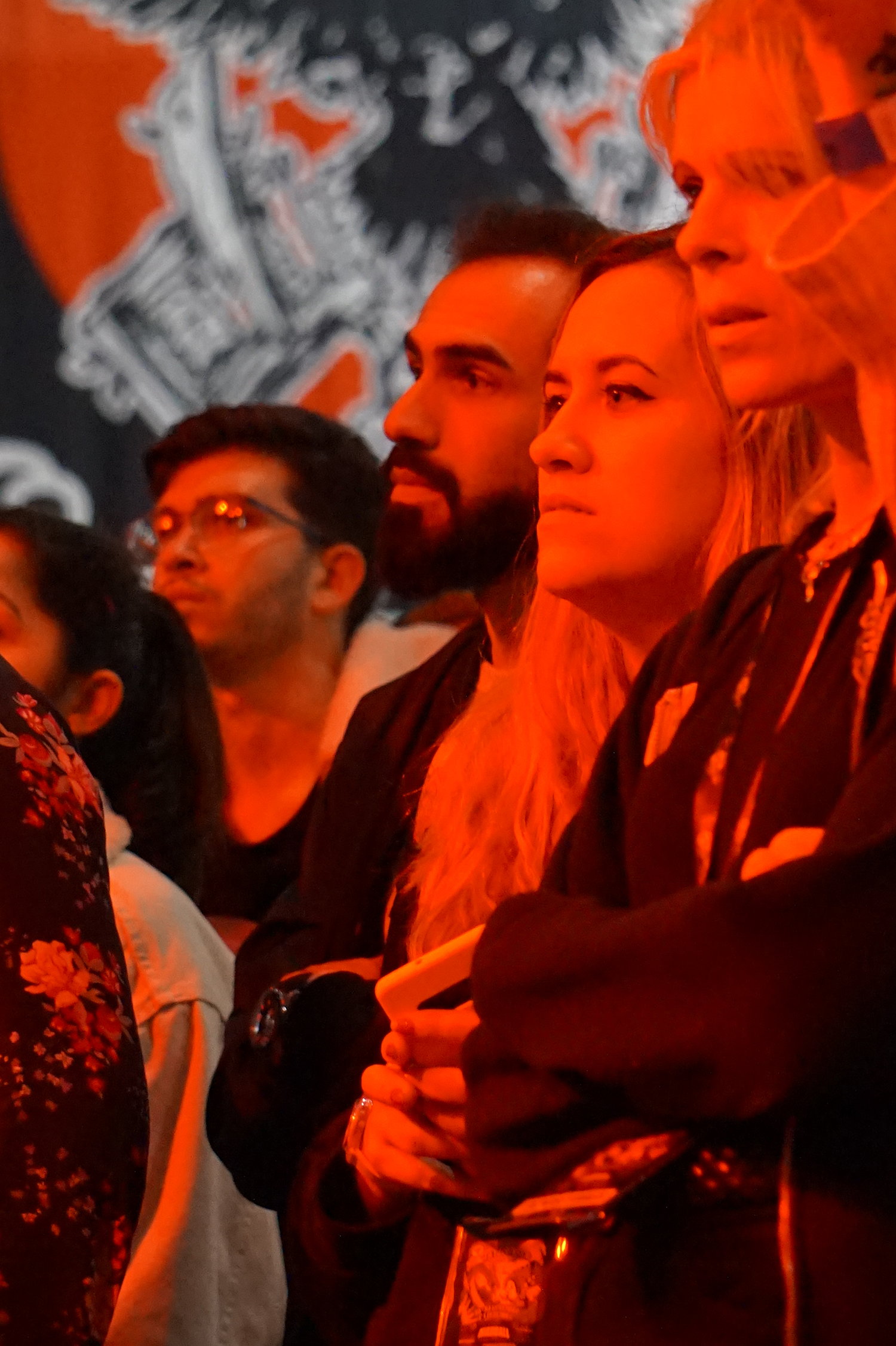