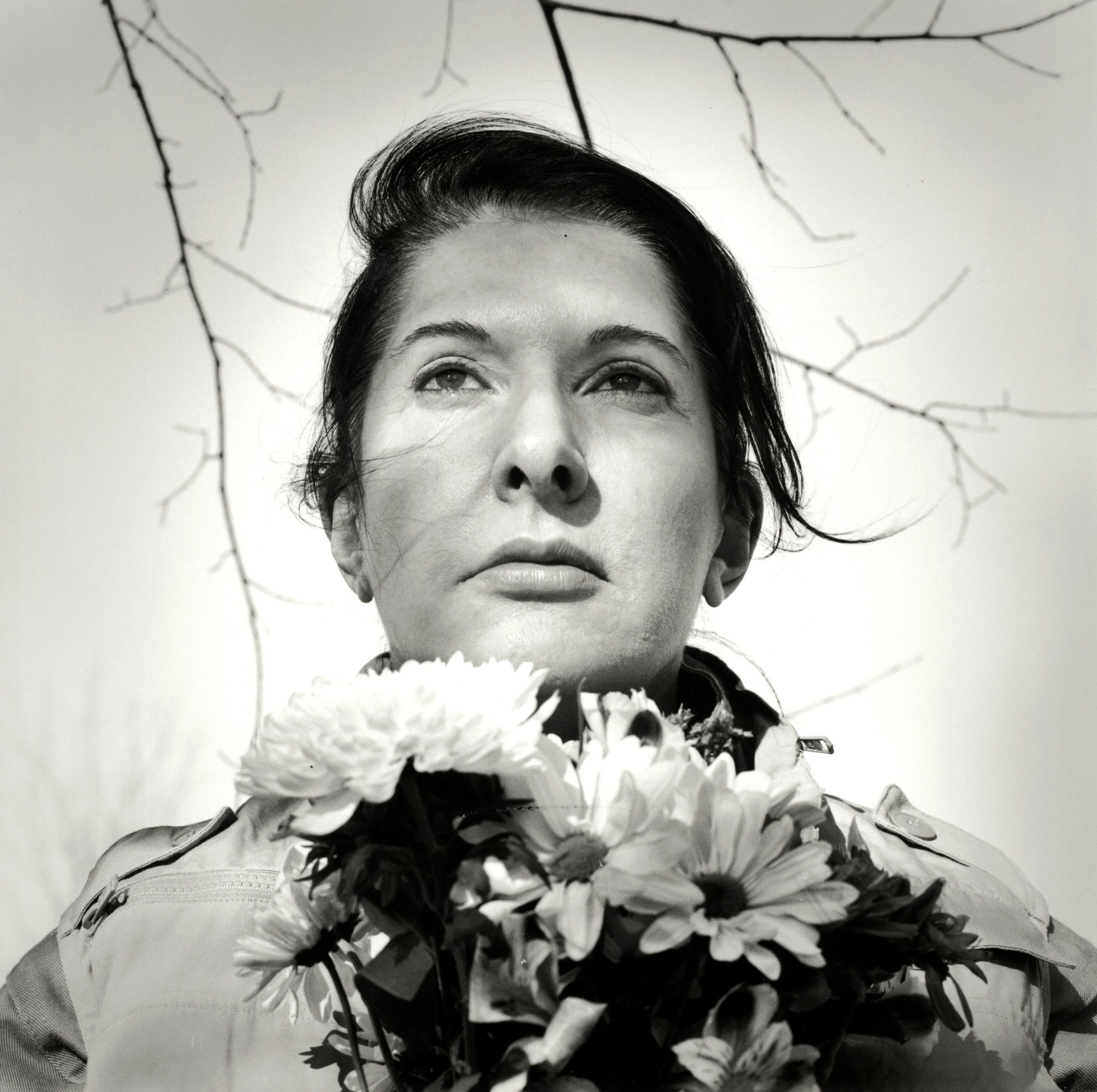 Artists have been known to stretch the limits of artmaking to limits unimaginable by most of us.

Whether it‚Äôs punching paint onto the canvas with boxing gloves, preserving animals in formaldehyde and suspending them in glass tanks, using humble needlecraft to represent birth in all its glory, or making elaborate collages out of drugs and other stuff, there‚Äôs no limit to the ways artists manipulate materials in service to their creative vision.

Performance artists, whose medium is mainly their own bodies, have been known to push the envelope even further‚Äîto the point of physical pain or damage, or even unconsciousness. Marina Abramovic is one of those artists. Since the 1970s she has explored the limits of human passivity and endurance, doing things or having things done to her body that no ordinary person would consider. Here are some highlights of her long career, both solo performances and collaborations‚Äîwith a partner, and with audiences. 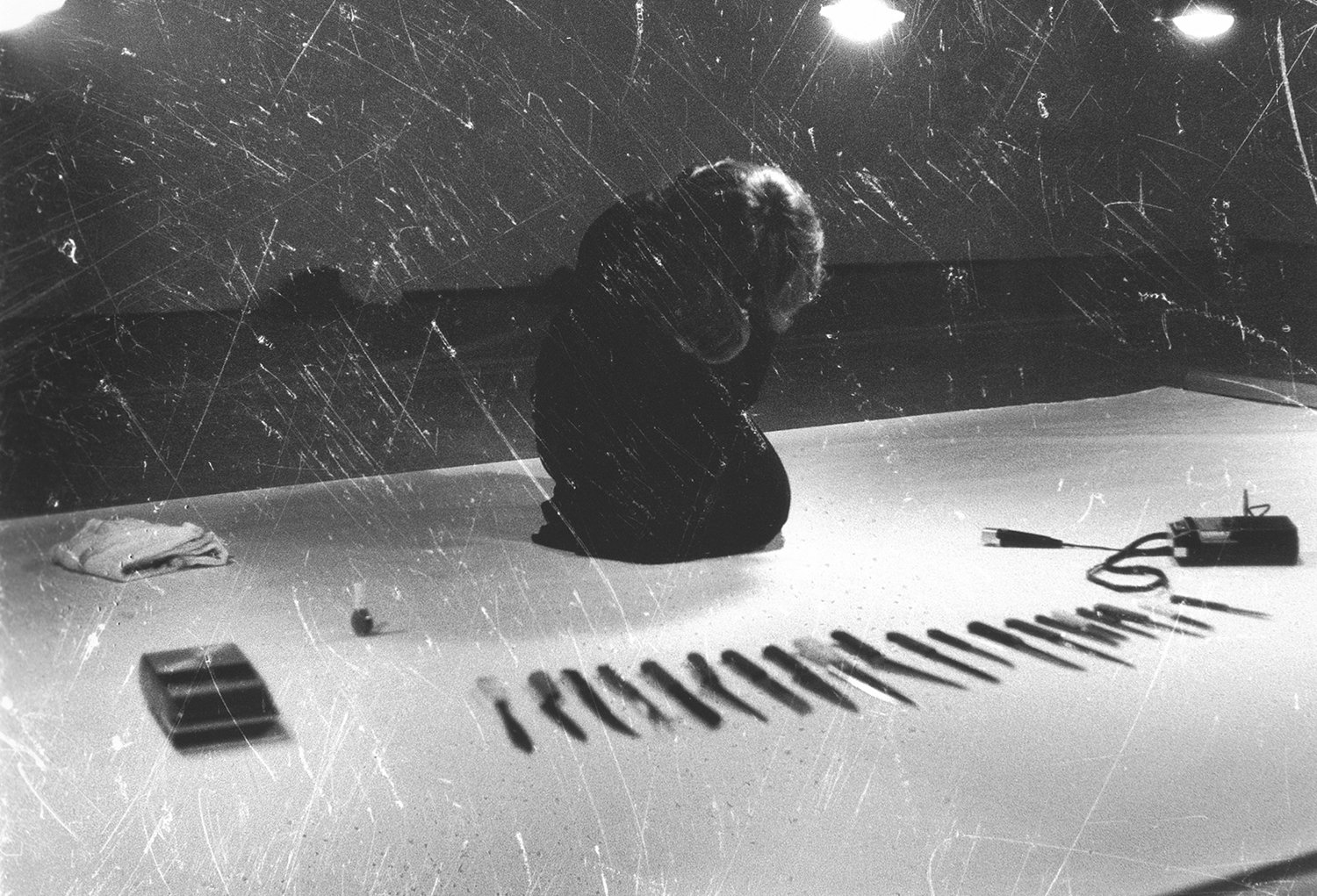 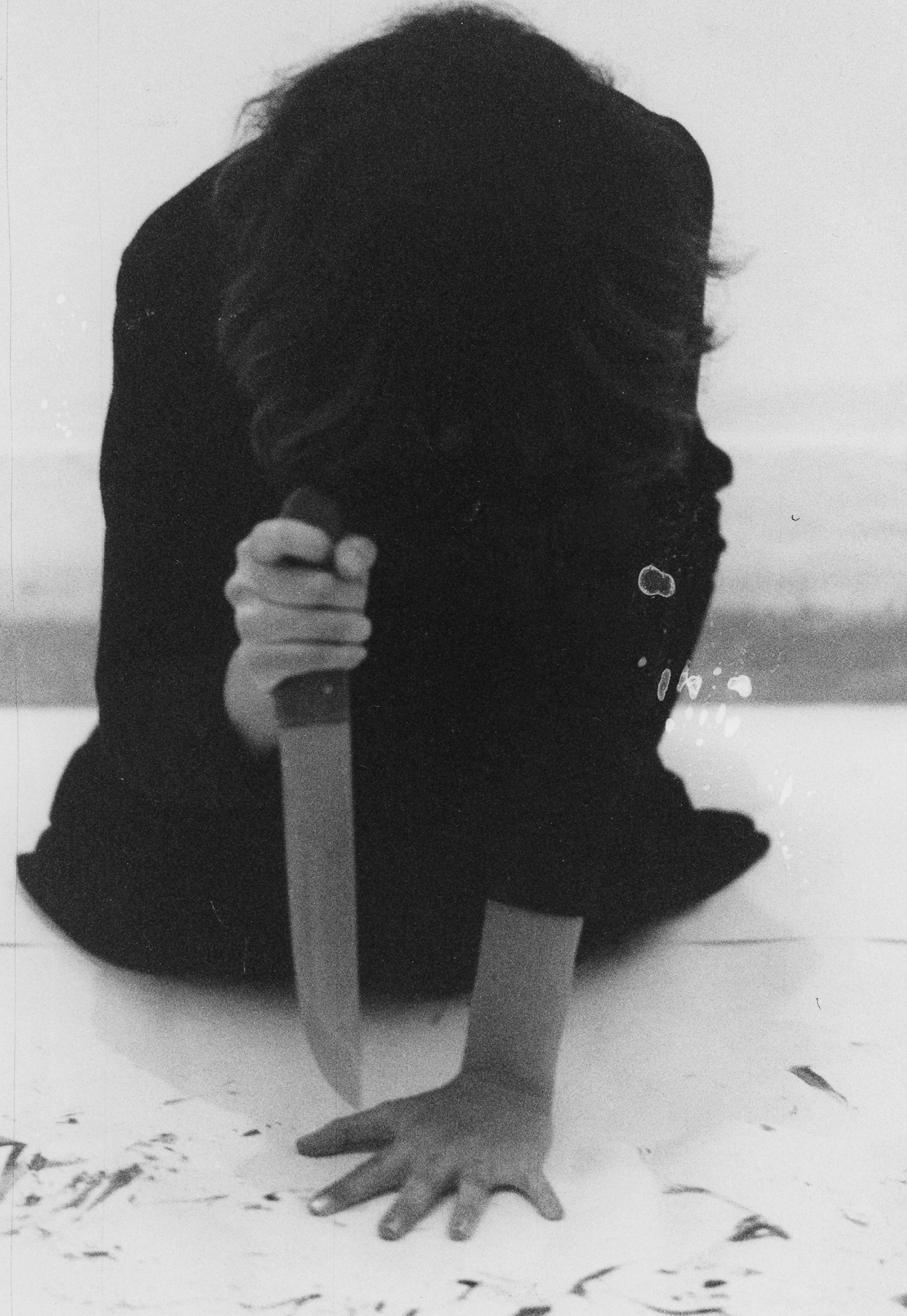 Right from the start, Abramovic made it clear that she wasn’t timid or squeamish. In her earliest performances, in 1973 and 1974, she used knives, fire, drugs, an industrial fan, and multiple random objects to test both her own limits and the limits of participants in the audience. For ‚ÄúRhythm 10,‚Äù she played a dangerous game with 20 sharp knives, rapidly jabbing a knife between her splayed fingers, replacing each¬Ý one when she cut herself and recording the sounds she made. Once she used¬Ý all the knives, she listened to the recording and attempted to replicate her movements, including the mistakes and sounds. 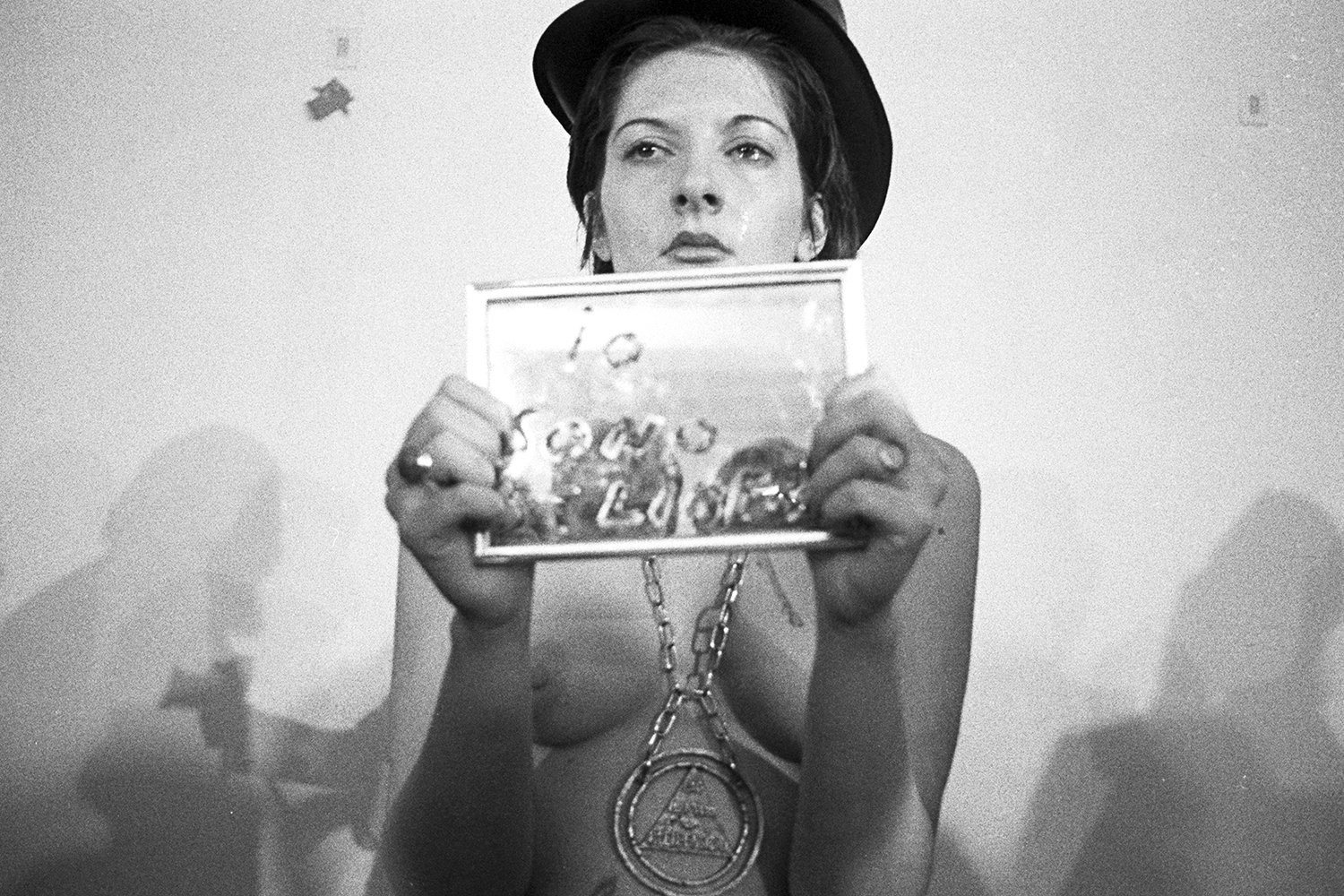 For “Rhythm 5,” in 1974, Abramovic ignited a large five-pointed star‚Äîa symbol of her communist upbringing in Yugoslavia‚Äîspread out on the gallery floor. As an act of purification, she then clipped her fingernails, toenails, and hair and threw the clippings into the fire, producing bursts of flames. Finally, she leaped across the flames to the center of the star. What the audience didn’t see right away was that she had passed out due to lack of oxygen, but once they did, she was promptly rescued. The experience of unconsciousness would become a theme in other performances.

Also in 1974, “Rhythm 0” was an act of passivity and surrender, where members of the audience became active participants. For six hours, Abramovic stood in a gallery amidst 72 objects‚Äîincluding a feather, honey, olive oil, scissors, a scalpel, a pen, a book, a gun, and one bullet‚Äîwith a sign informing visitors that they could do whatever they wanted with any of the objects, and with her body. At first people held back, but soon a clear division developed between those who wanted to harm her and those who wanted to protect her. The aggression escalated, until finally she was stripped, scratched, cut, and bleeding‚Äîviolated and objectified. 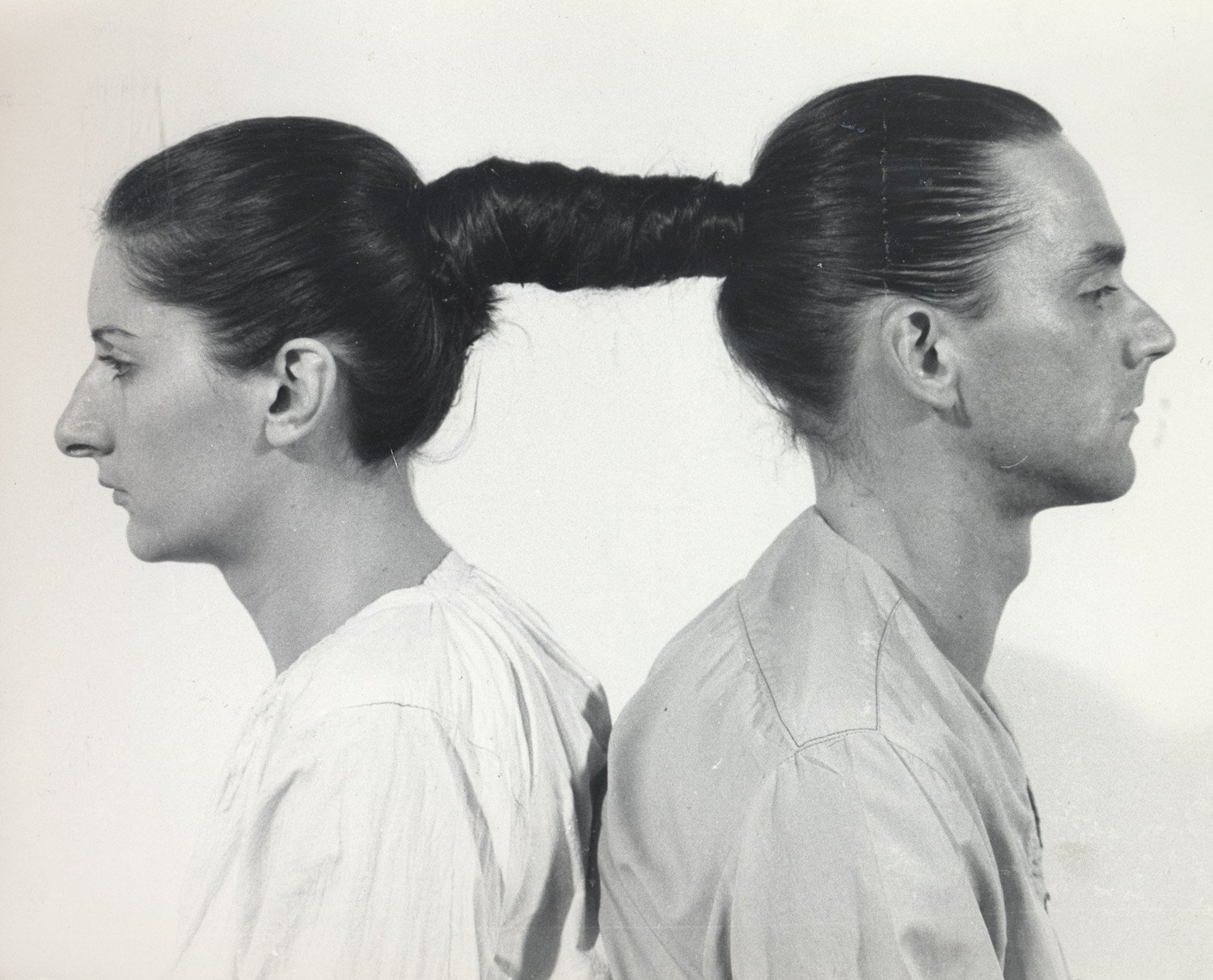 Abramovic and her partner Ulay sat with their hair entwined for hours and hours. ‚ÄúRelation in Time,‚Äù 1976.

In Amsterdam in 1976, Abramovic met Uwe Laysiepen, a West German performance artist who called himself Ulay. They formed an intense personal and creative partnership, merging their identities into something they called “The Other” and exploring concepts like the limits of the body, male and female energy, and nonverbal communication. For “Relation in Space” in 1976, they spent an hour running into each other repeatedly, slamming their bodies together as a way to mix their energies. The following year they performed “Relation in Time,” an endurance test in which they sat alone in a room for 16 hours with their hair tied together, then let people come in to see if the energy of others would push the performance even further. 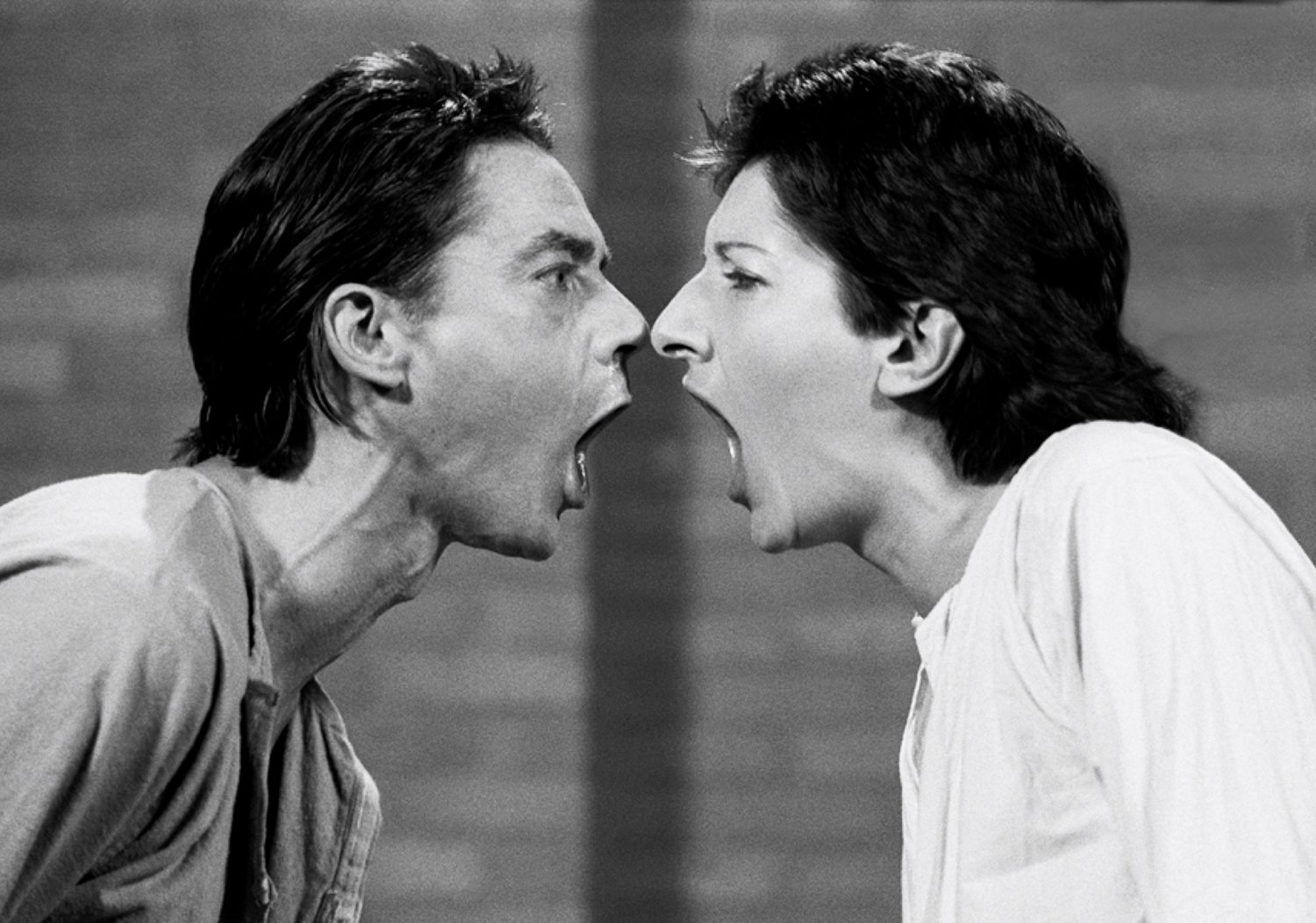 Top: In one performance, the couple made sounds at each other while moving closer, until they were yelling into each other’s mouths. From “Marina Abramoviƒá and Ulay’s Adventurous 1970s Performance Art”¬Ý¬© Marina Abramovic. Bottom: Breathing In/Breathing Out, 1977.

‚ÄúBreathing In/Breathing Out,‚Äù in 1977, was another risky endurance test. This time, Abramovic and Ulay sat with their mouths pressed together‚Äînot in a kiss, but so that they could exchange breaths. Breathing into each other‚Äôs mouths, inhaling and exhaling carbon dioxide back and forth, they soon ran out of oxygen and collapsed to the floor unconscious. It was a stark exploration of an individual‚Äôs ability to absorb and destroy the life of another. 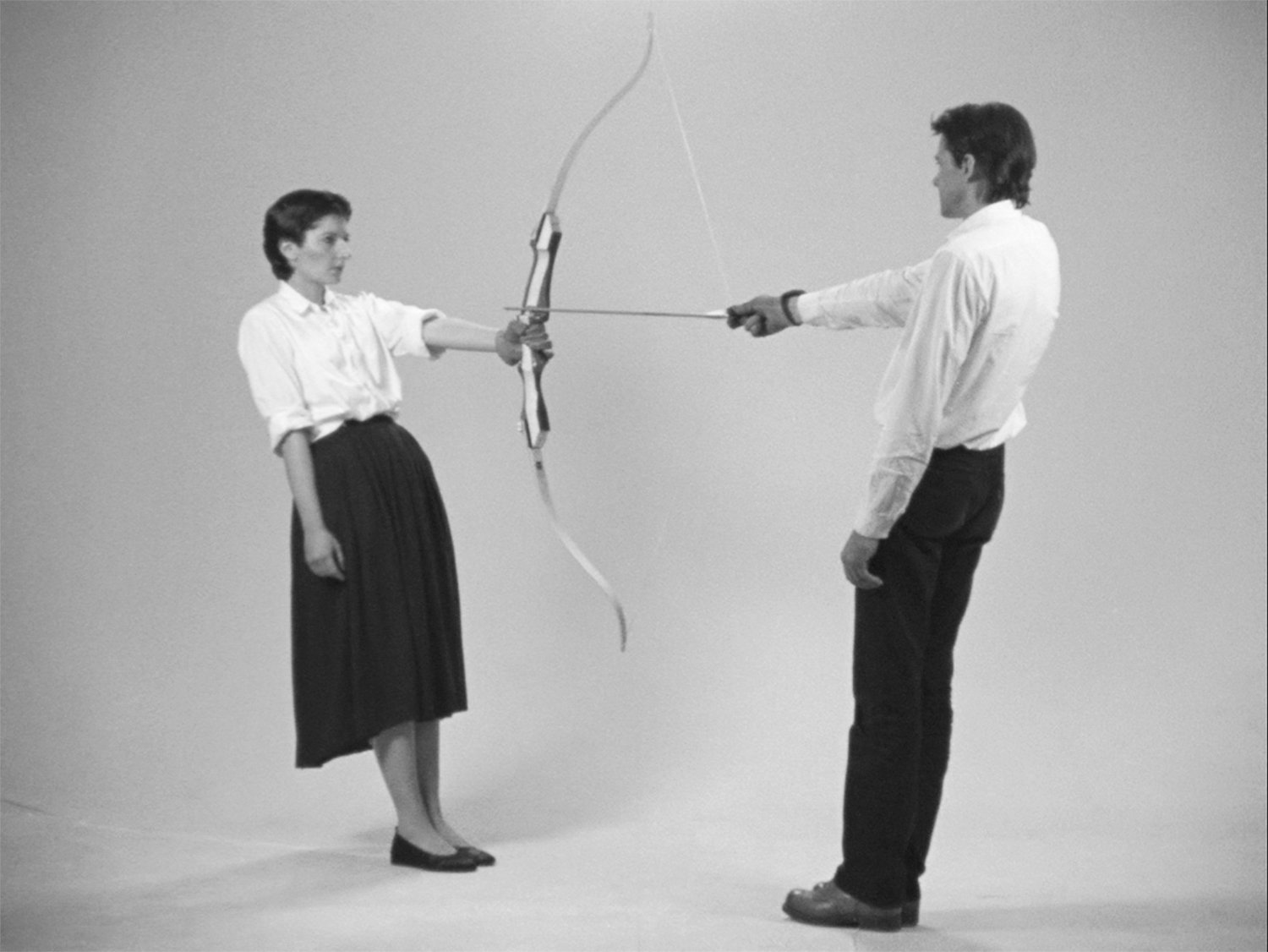 Top: A still image from Rest Energy, 1980. Bottom: A 90-second video of the performance.

For ‚ÄúRest Energy‚Äù in 1980, the couple stood in a gallery using a bow and arrow held by the weight of their own bodies in an exploration of balance and trust. While Abramovic pulled back on the bow, Ulay held the arrow, pointed directly at her heart. The two simply stood there, leaning away from each other, letting the tension between their bodies keep the arrow in place.

In 1988, after several years of discord, they marked the end of their relationship with a spiritual journey by walking across the Great Wall of China, starting at opposite ends and meeting in the middle. 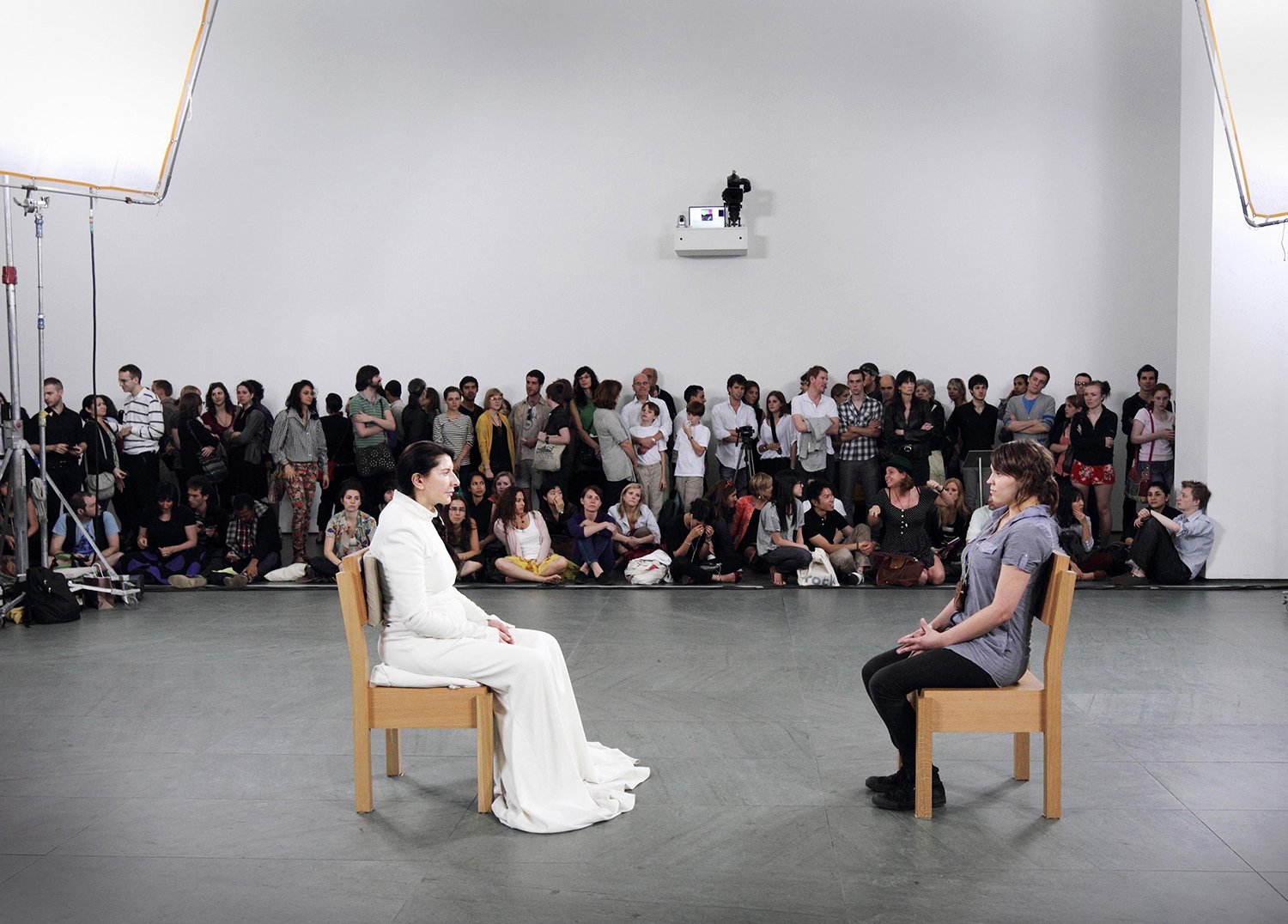 Top: Sitting eight hours a day for almost three months, Abramovic¬Ý connected face-to-face with hundreds of people. The Artist is Present, 2010, photo ¬© Marco Anelli. Bottom: A visit by her former partner added to the performance.

The Artist Is Present

In 2010, the Museum of Modern Art in New York held a retrospective of Abramovic‚Äôs career, including photos, videos, audio recordings, and, for the first time, recreations of some of her performances by other people. During the entire run of the exhibition, Abramovic performed her longest‚Äîand most notable‚Äîwork to date, ‚ÄúThe Artist Is Present.‚Äù In a gallery of the museum were two chairs, sometimes with a table, sometimes not. Abramovic sat, silent and unmoving, for hours on end, and one by one, visitors sat across from her for a few minutes. Simply by being present, connecting, making eye contact, she evoked strong emotional responses. Many people cried, and she cried in response. Hundreds lined up, waiting to sit, and by the end she sat with more than 1,500 people. With all but one of them, there was no physical contact. When Ulay showed up, her composure broke, she was overcome with emotion, and she reached out to touch his hands.

Abramovic continues to push the envelope, mainly through her collaborative institute. In addition to performing, she offers workshops and projects across the globe that allow artists to absorb her methods of endurance and sensory deprivation and create expressive performances of their own.