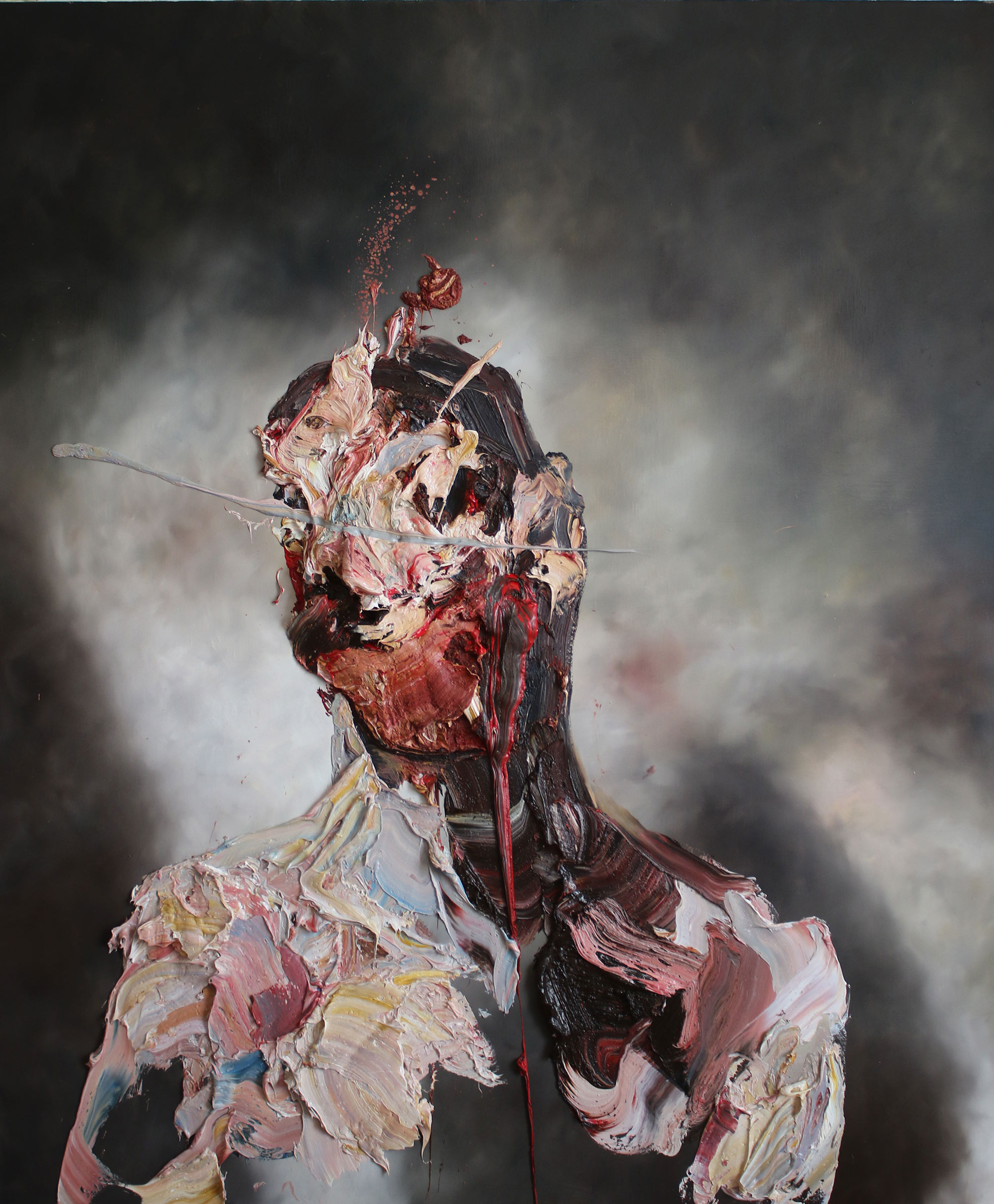 The impasto artworks of Antony Micallef defy the long traditions of figural paintings; instead of recreating subjectivity, he distorts and builds upon it to unearth the living, chaotic nature of the medium itself.

Micallefâ€™s works have emerged from a long history of postwar, abstract paintings; taught by John Virtue, an English painter whose depictions of London skylines dissolve familiar landmarks into a smoggy and ambiguous essence, Micallefâ€™s work enacts a similar process upon the face. He begins with his own mirror imageâ€”for reasons he discusses belowâ€”but quickly deconstructs it into an emotional, familiar-yet-alien moment. Messy, unpredictable, and experimental, his quasi-sculptural works speak to the experience of inhabiting a body and transmuting its presence through the process of art creation. His work has been exhibited worldwide, including a solo show titled â€śRaw Intentâ€ť at Pearl Lam Galleries in Hong Kong.

We talked with Micallef about his creative process, thematic intent, and global reception. Read on for the interview below. 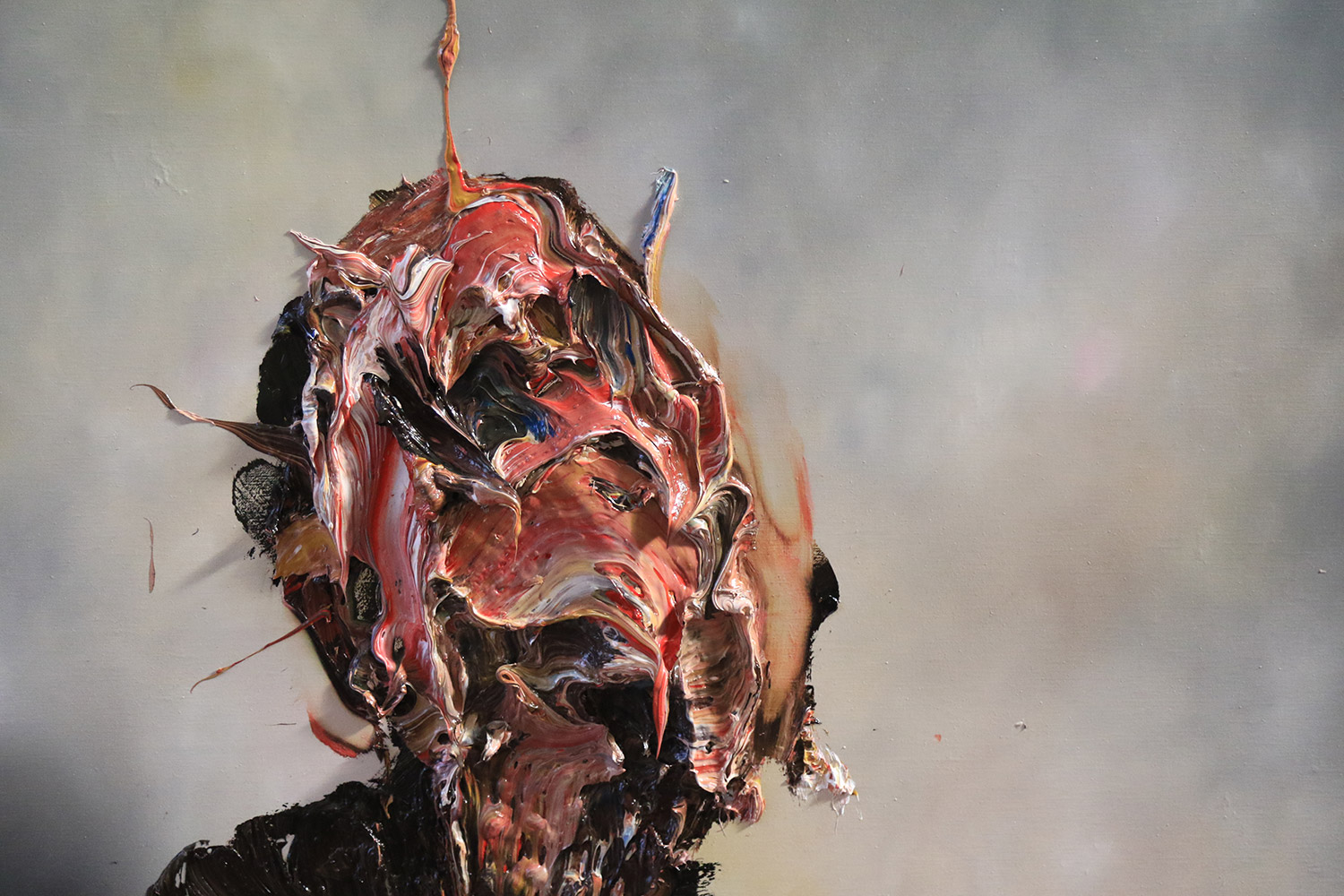 Micallef uses thick layers of paint along with scrapers and palette knives to “sculpt” his impasto works.

When did you begin creating art, and what first inspired your experiments in representations of the human face and form?

Iâ€™ve been drawing ever since I can remember. Art is the one thing that I have aways enjoyed. Iâ€™ve been painting my own self-portraits for the last 25 years. I donâ€™t need another sitter as itâ€™s just me, and I can do whatever I want to my own face without the sitter being offended. I think experimentation is just part of the discovery and the journey. Why would you [want] to do the same things over and over again? The best art for me is about discovery, and if Iâ€™m having fun with it, then generally itâ€™s enjoyed by someone else too. 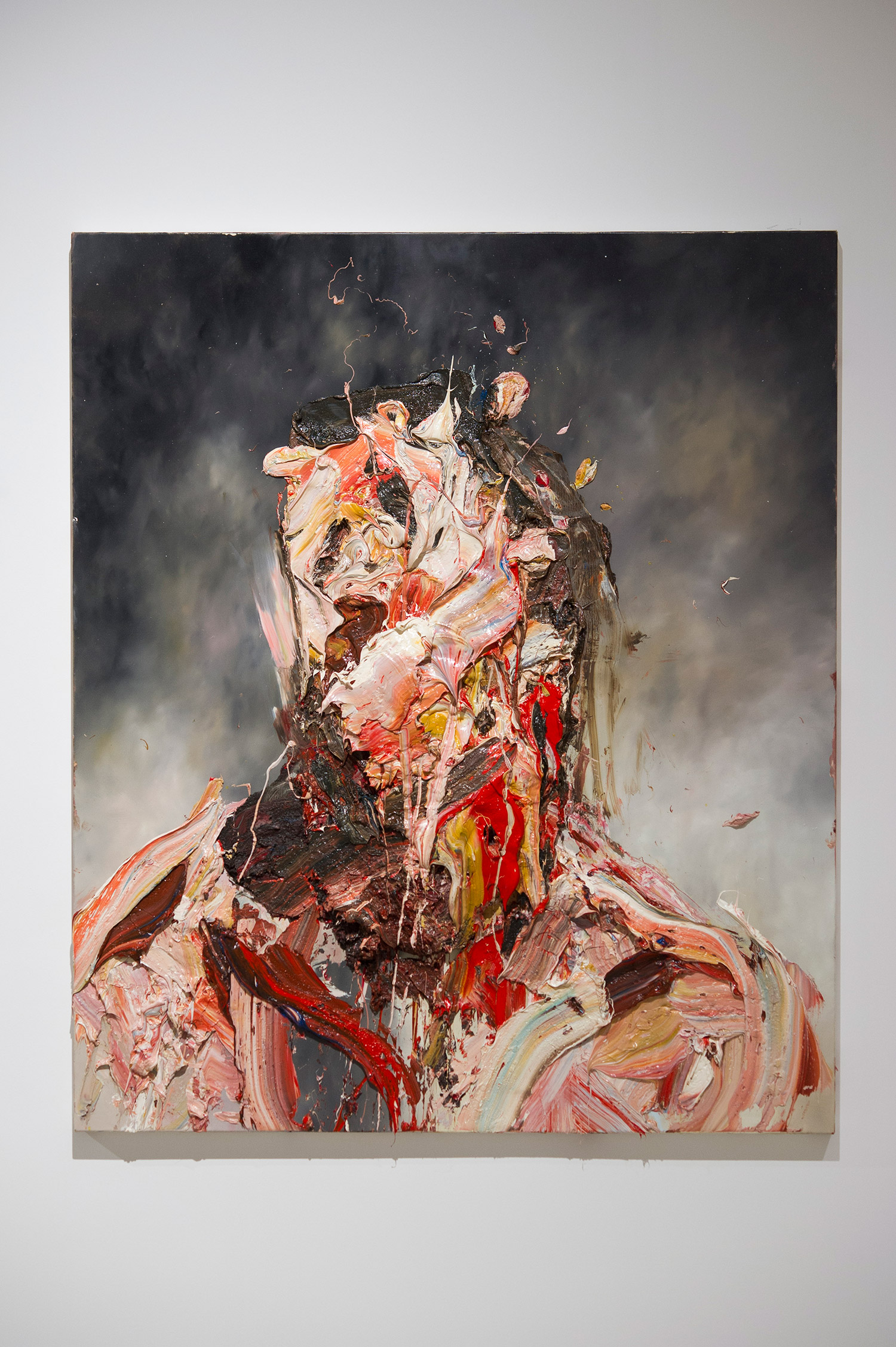 The distorted face becomes a conduit for expressing the power of the medium.

I think the definition of a portrait to me is [for the image] to look like [the] sitter. My work is not about that. They are their “own people/beings” in their own right. I see it more like excavating; seeing what can be unearthed from the paint itself. I do paint all these works from life by looking in a mirror, but itâ€™s not about looking like me, nor do I see these figures as me. Iâ€™m just a vehicle in the process. Iâ€™m just information. I use myself as a structural model, but I donâ€™t see [the portraits] as me when I look at them. 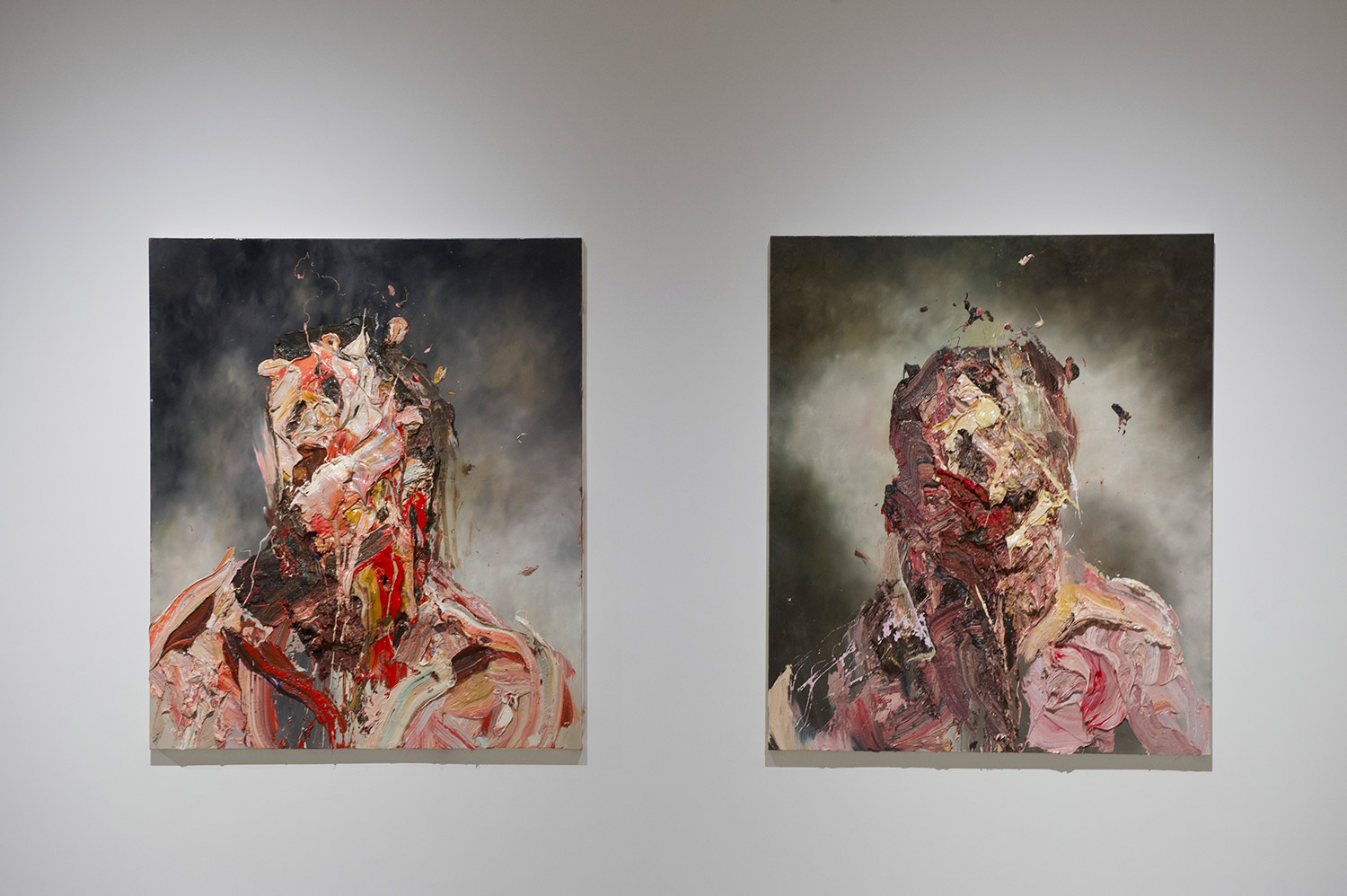 Each of Micallef’s paintings have depth and nuance in regards to the emotions they invoke.

There is a significant shift between your figure paintings of 2009â€“2011 and your recent impasto artworks. When and why did you begin experimenting with the impasto technique?

I think in the last two years. Iâ€™ve always wanted to do this, but itâ€™s only lately I fully committed to this process of literally using this amount of paint. Itâ€™s not something you can do by halves. I just wasn’t ready before, and now I feel itâ€™s something I want to take further. 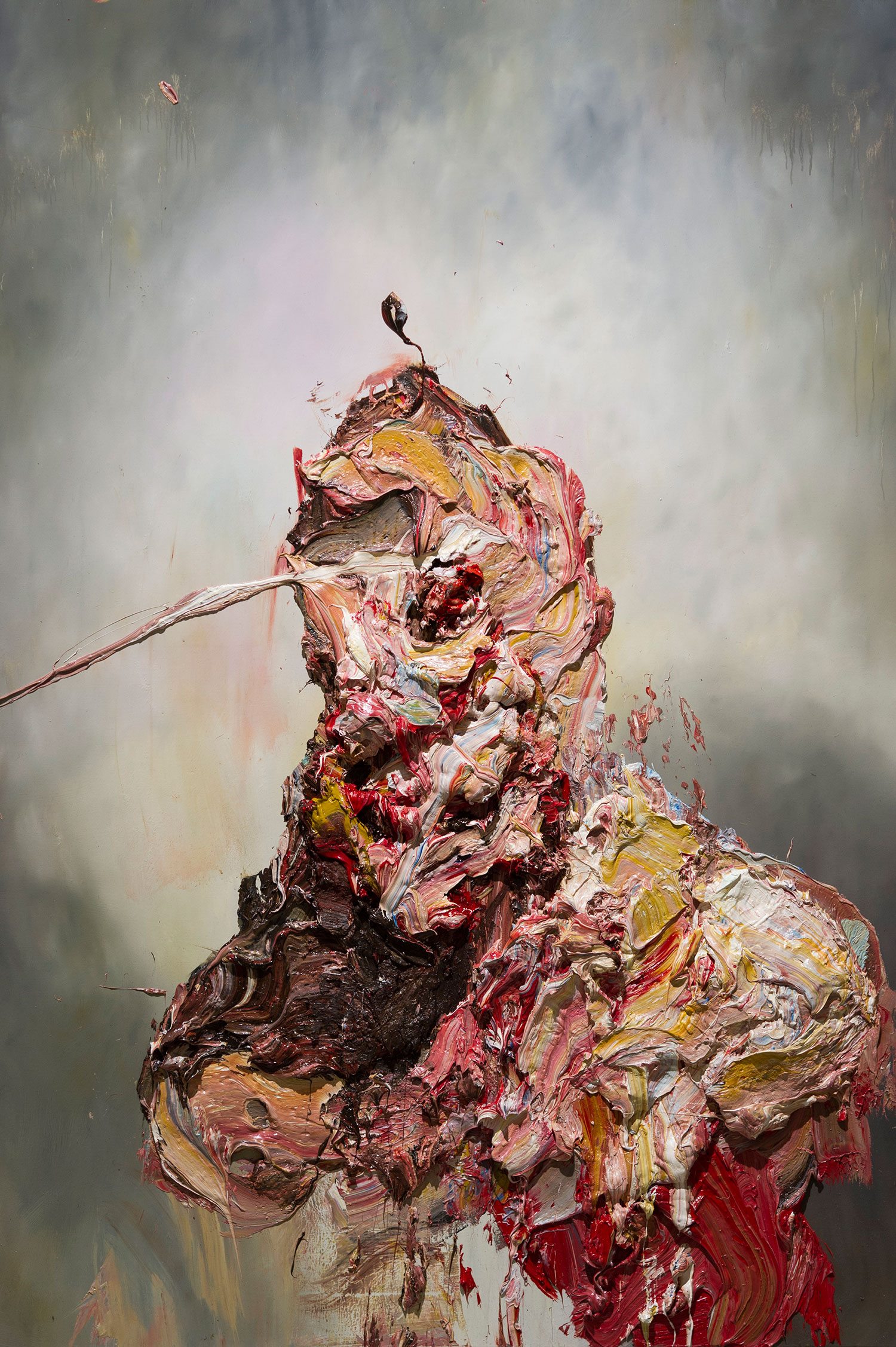 His paintings are raw and expressionistic.

What impact has impasto had on your art, and your relationship to your art?

Working in this way is deeply immersive. You literally get covered from head to toe in oil paint while making the work. It goes beyond impasto to the point of being almost sculptural. The commitment and dedication to the subject feels very physical, and you have to feel fully committed before starting the piece. I use huge brushes as well as painting knives, and any other tool that can give me the desired marks I need while in the process of creating. The studio at the end of the day looks more like an abattoir than a painting space, as every single surface is literally covered in flesh-coloured paint. 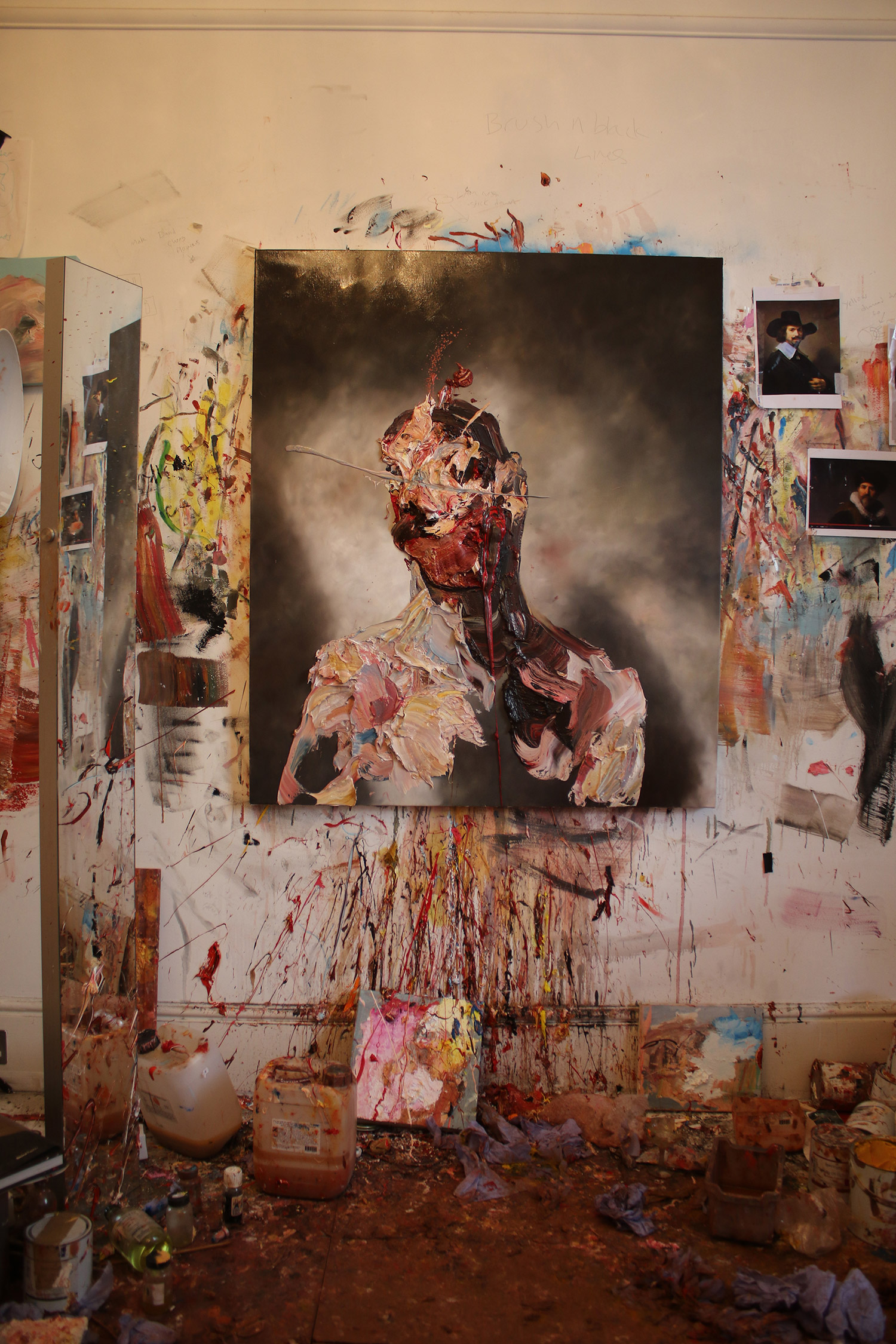 The creation process is a messy one.

I understand that the great landscape painter John Virtue was your teacher. How has his work and teachings influenced you throughout your career? Do you see his influence in your current work?

John Virtue taught me how to be to be critical with my work, and how to be economical when paintingâ€”to say more with less. He was a great teacher and taught me the fundamentals of mark-making. He himself was taught by Frank Auerbach who, in my opinion, is our last great postwar painter, after Francis Bacon and Lucian Freud. Together, they form the collective known as the School of London. 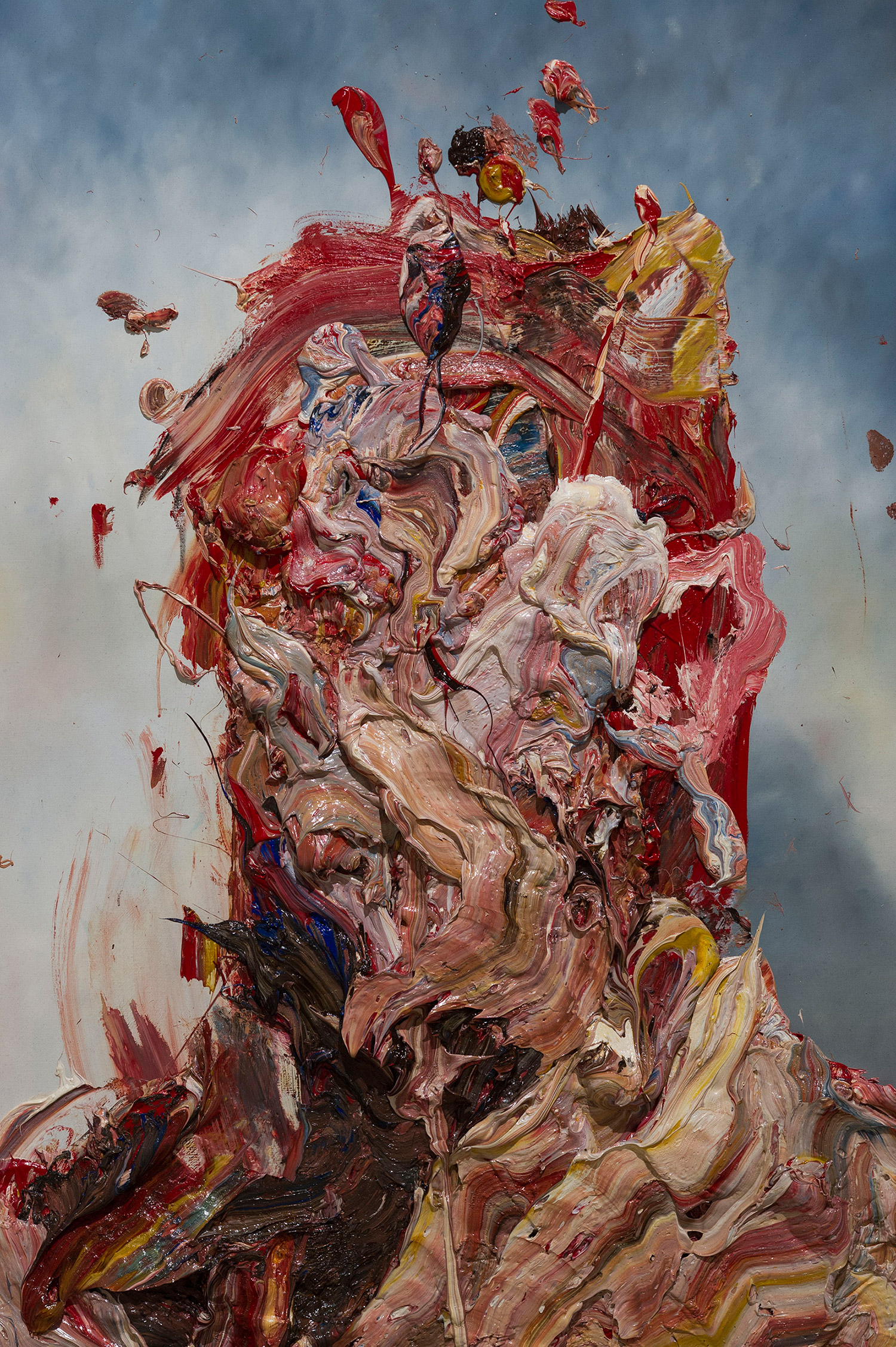 The figure is lost, but its presence somehow remains.

Disfigurement of the face is always a disturbing concept; in some ways, your recent work reminds me of the performance art of Olivier de Sagazan. What thoughts or feelings do you seek to invoke in the viewer by abstracting the face?

I think the aim is to try and capture something that evokes feeling. Distortion is a way of saying something without being too literal. It allows a space where you can be ambiguous without giving too much away. I donâ€™t see the point in painting something that is too representational, as it just feels like going over old ground. The distortion and the abstraction allows the piece to be about the medium itself and the paint, as well as the subject. 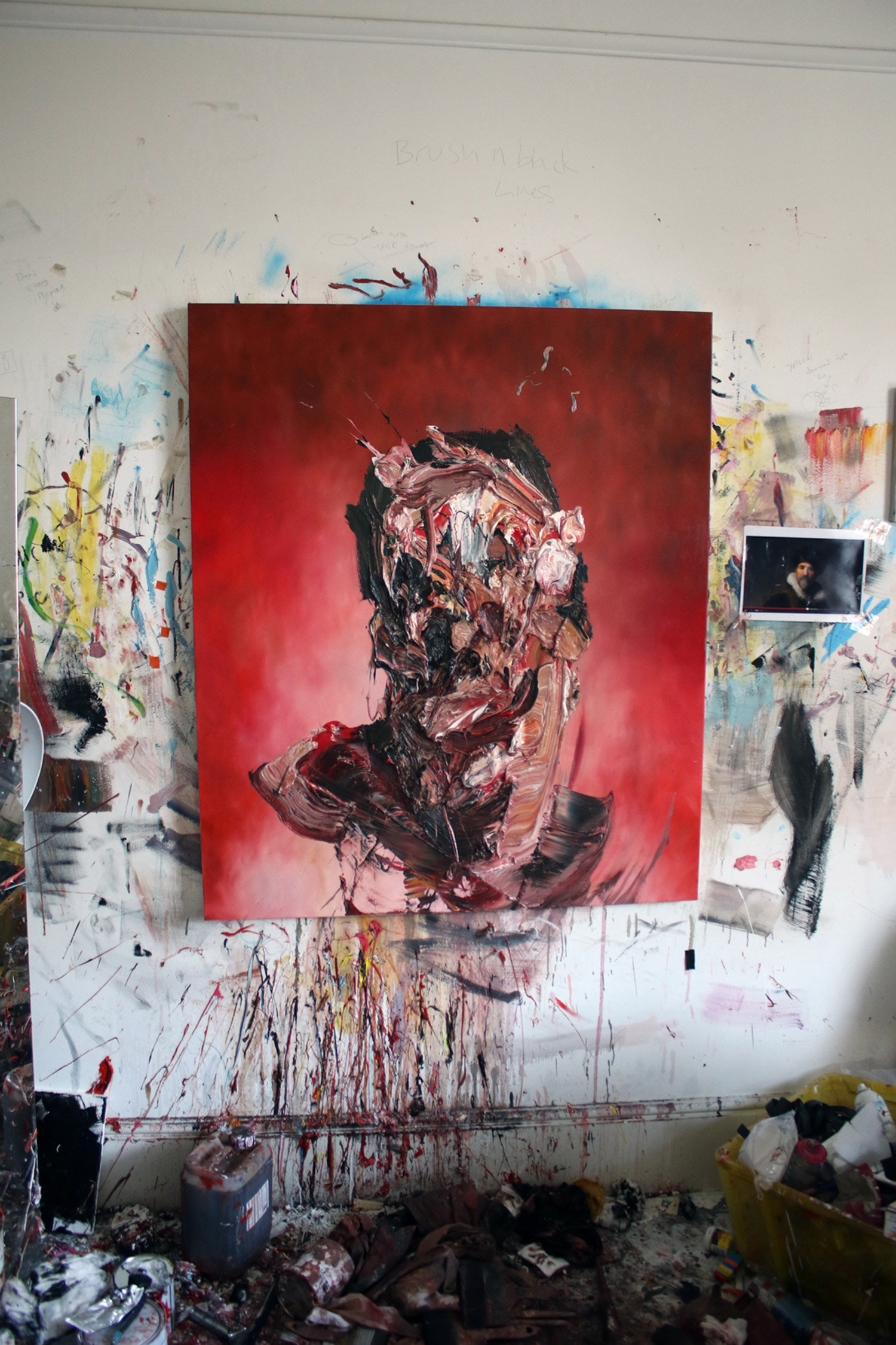 How did your solo show “Raw Intent” go? Did you learn anything new about your art, and/or people’s experience of your art?

Raw Intent was a huge success for me personally. It was my first solo show in Asia that has led to exhibiting at Art Basel Hong Kong multiple times. It feels great to have work in prominent collections in mainland China. 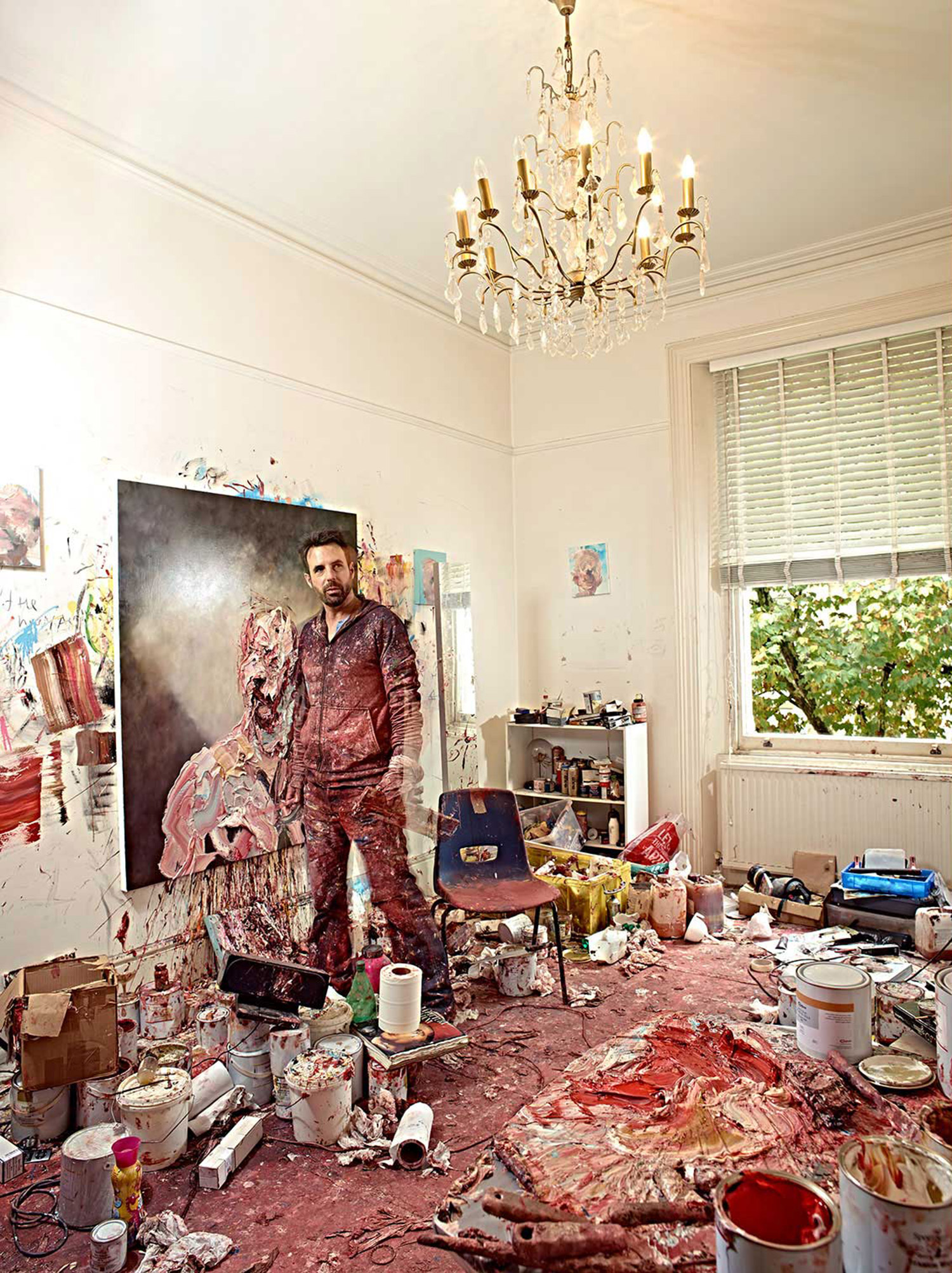 Micallef in the studo.

Do you have any projects or shows we can look forward to from you in the near future?

I canâ€™t say too much at the moment, but Iâ€™m currently working for shows in Asia and America.