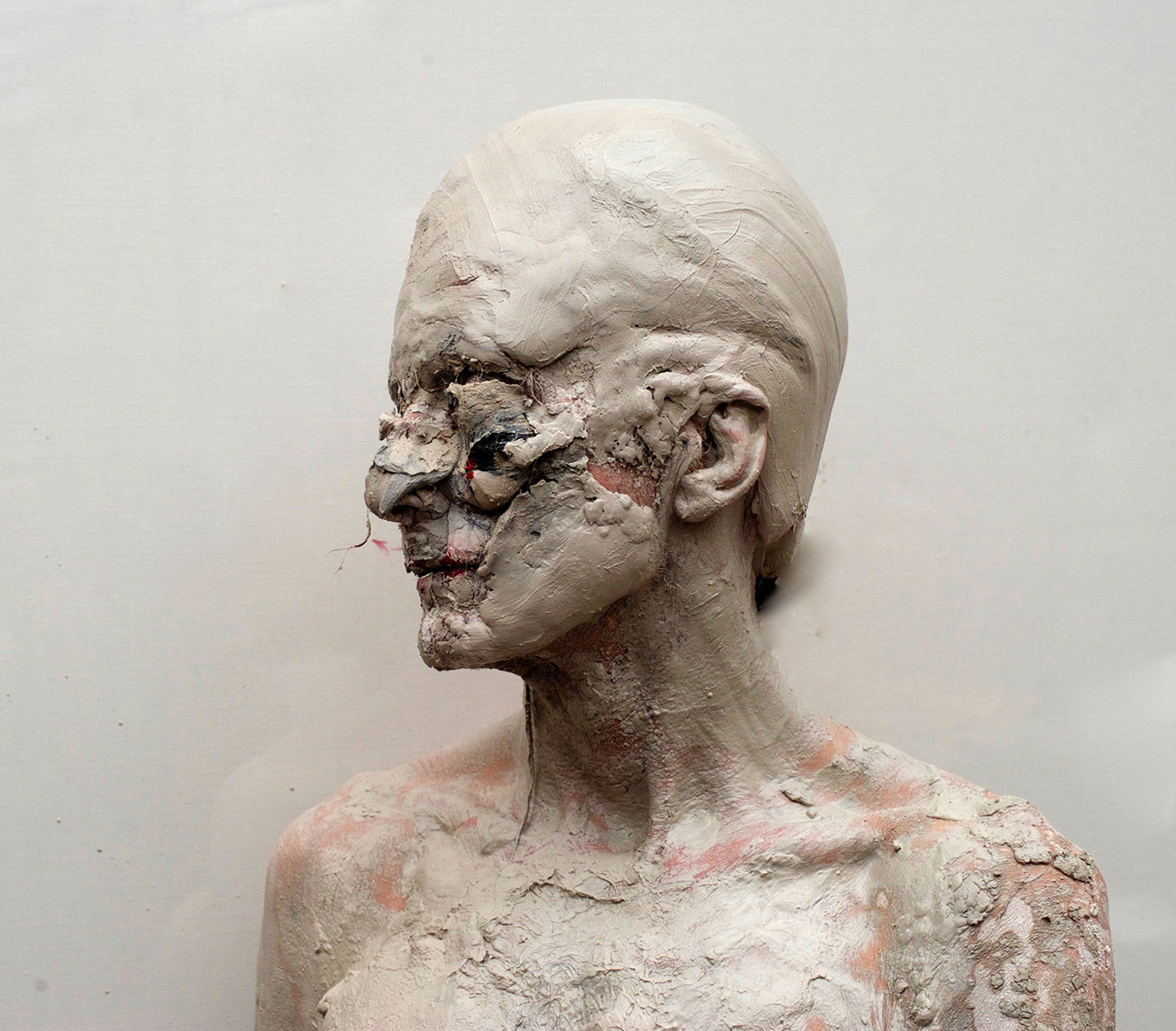 In the middle of the movie â€śSamsaraâ€ť (2011), a nicely dressed man appears behind a desk. He quickly begins plastering his face with clay and paint, building thick layers with feverish intensity. Within two minutes, his head is transformed into a grotesque death mask, which he impales and tears open, only to rebuild and destroy again and again.

This is Olivier de Sagazan performing an iteration of â€śTransfiguration,â€ť a series he began in 1999. Influenced by tribal art and shamanic initiation rituals, de Sagazan remolds his face in an effort to dissolve his subjectivity into a pre-linguistic state. Reawakened in madness, he then battles to reunite the body with language, torturing and disfiguring himself until a primordial essenceâ€”or as he calls it, the “unnamable” thingâ€”appears from the wreckage, speaking in its own language for the first time.

As a long-time admirer of de Sagazan’s work, I reached out to ask him a few questions about his performance art (he is also a talented sculptor and painter). I was particularly interested in his process, and the way he destroys the face as a means of deconstructing identity. His answers are lively, poetic, and scholarly, revealing an intensely creative mind that is constantly seeking a way to “disrupt the familiarity of life.”

Top: For this provocative French performance artist, the body is the canvas that must answer the artist’s call. 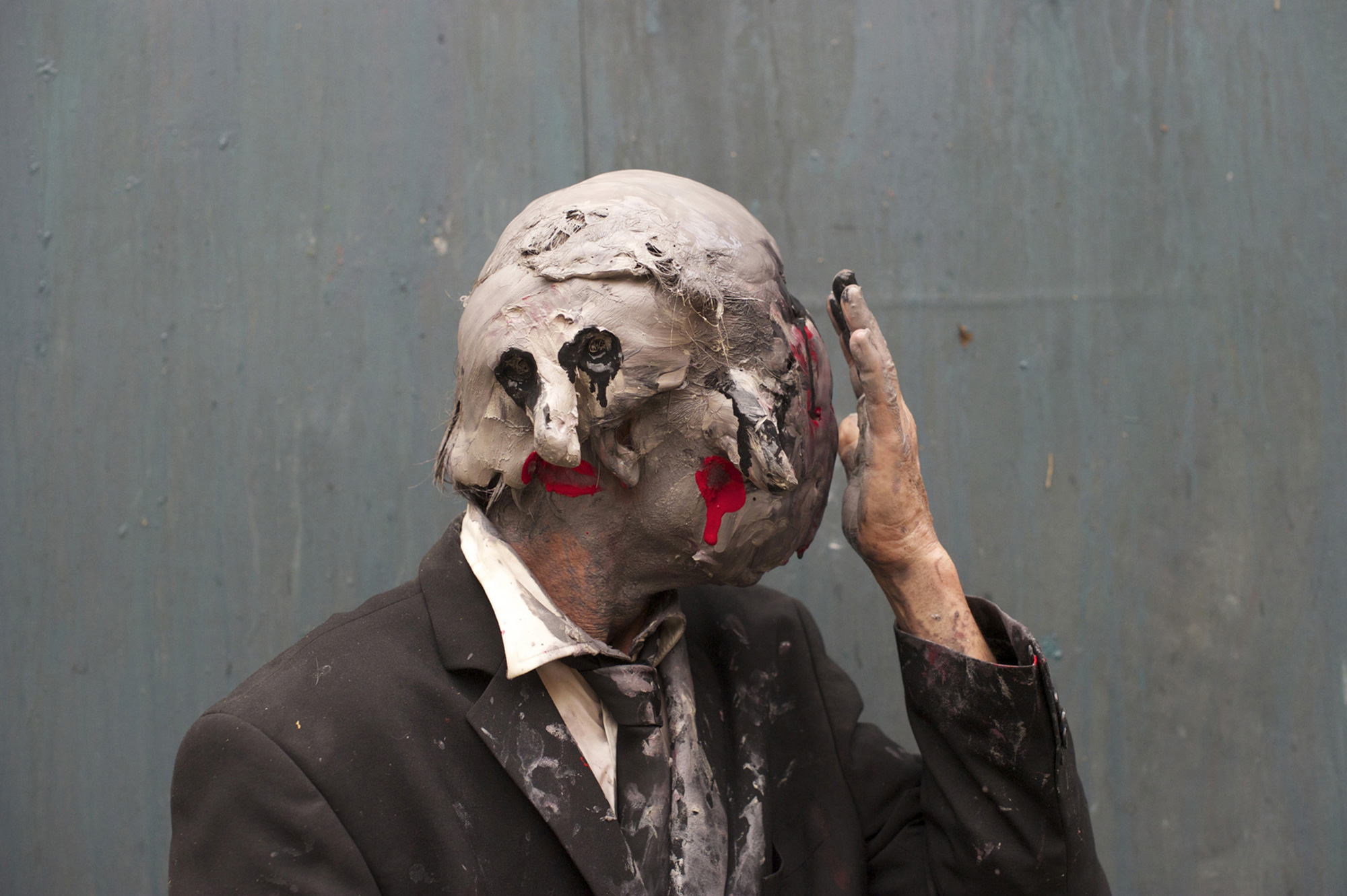 De Sagazan questions the body by abstracting and multiplying it.

You were born in Africa. What aspects of your performances relate to your country of birth and its culture?

I believe itâ€™s a question of engagement: in black Africa, art objects such as masks or fetishesâ€”as well as certain dancesâ€”are acts of survival in order to connect with the spirits, to ask their favor. I donâ€™t believe in spirits or other worlds, but conversely for me a performance is a vital gesture, in that it represents a means to question my presence in the world. 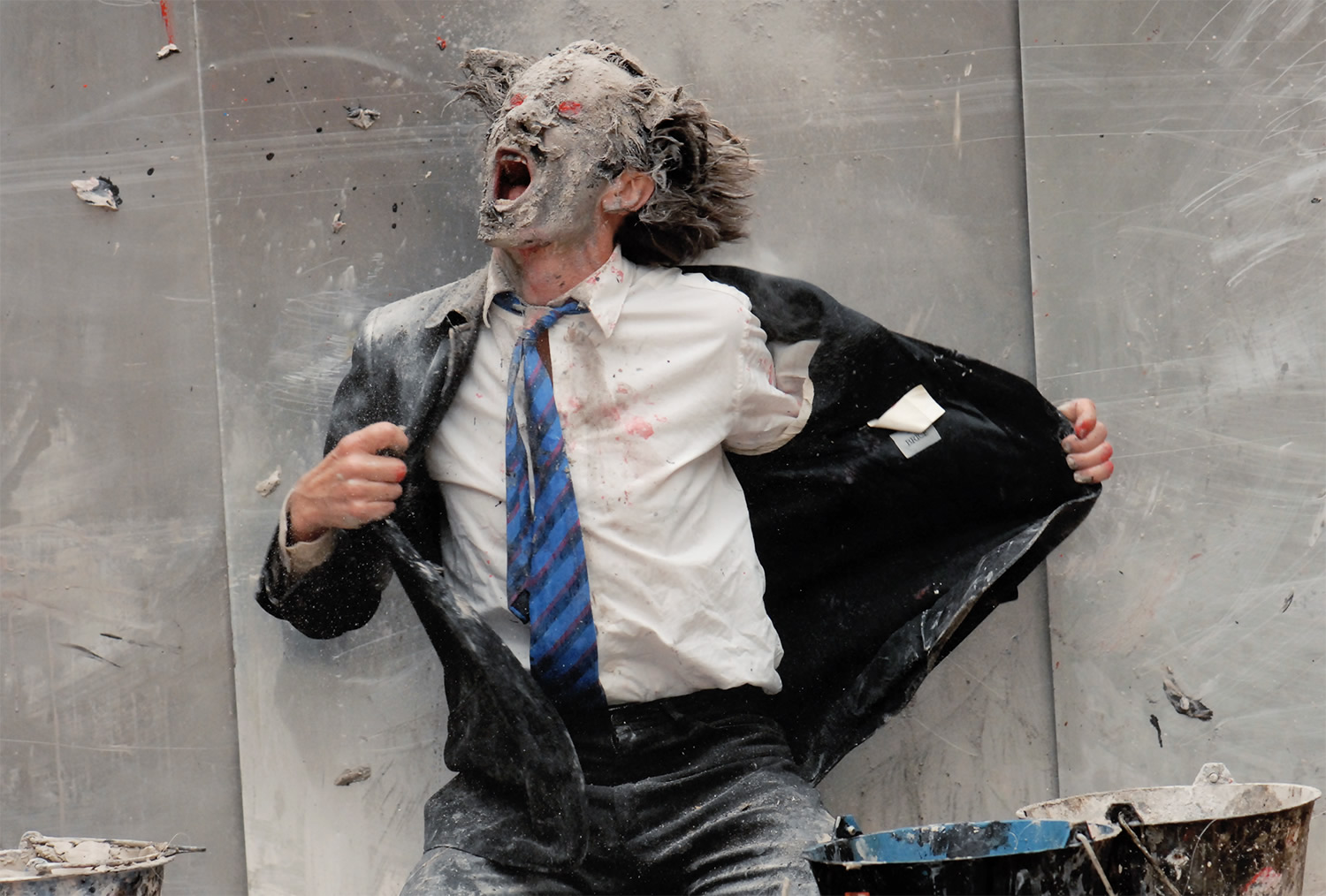 While his performances often focus on the face, they are a full mindâ€“body experience.

You work in other mediums: painting, photography, and sculpting. When and why did you start making performance art?

I started painting in the 90s, then came later to sculpture, and in â€™97 I gave my first performance, as if to strengthen during the preview a form of engagement, here and now. 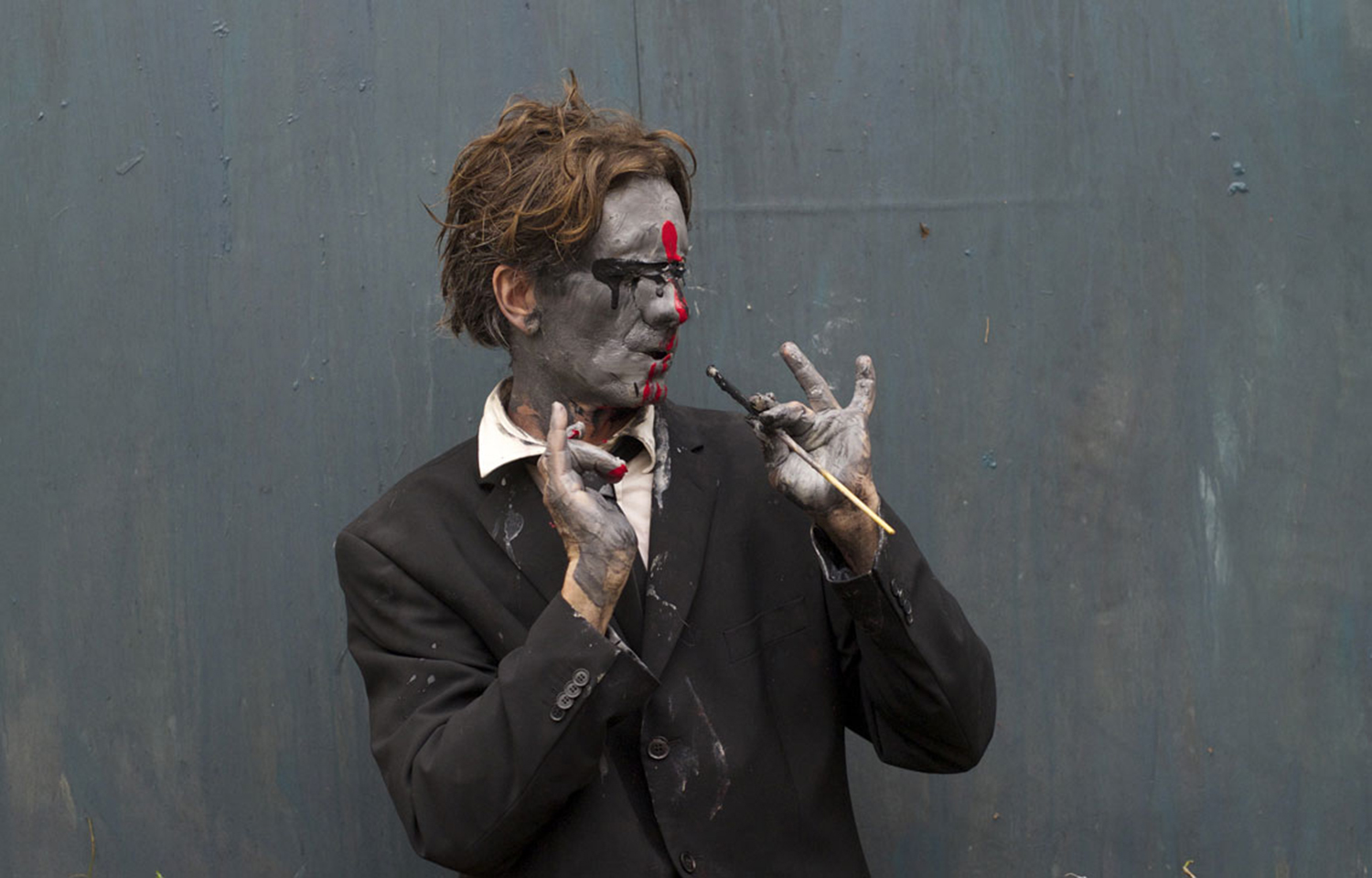 There is an almost child-like playfulness to de Sagazan’s art.

Sometimes in your performances, such as â€śTransfiguration,â€ť you almost seem joyful as you mutilate yourself. How do joy and violence overlap in your work?

Thereâ€™s a form of catharsis and a great joy in being able to state loudly and proudly my feeling of existing in this world without understanding anything, when conversely in modern life, my contemporaries seem to accept without question the strangeness of being â€śthrown into the world.â€ť A performance is for me like a singularity in the space of life, where I suddenly have the right and the duty to manifest this astonishment. 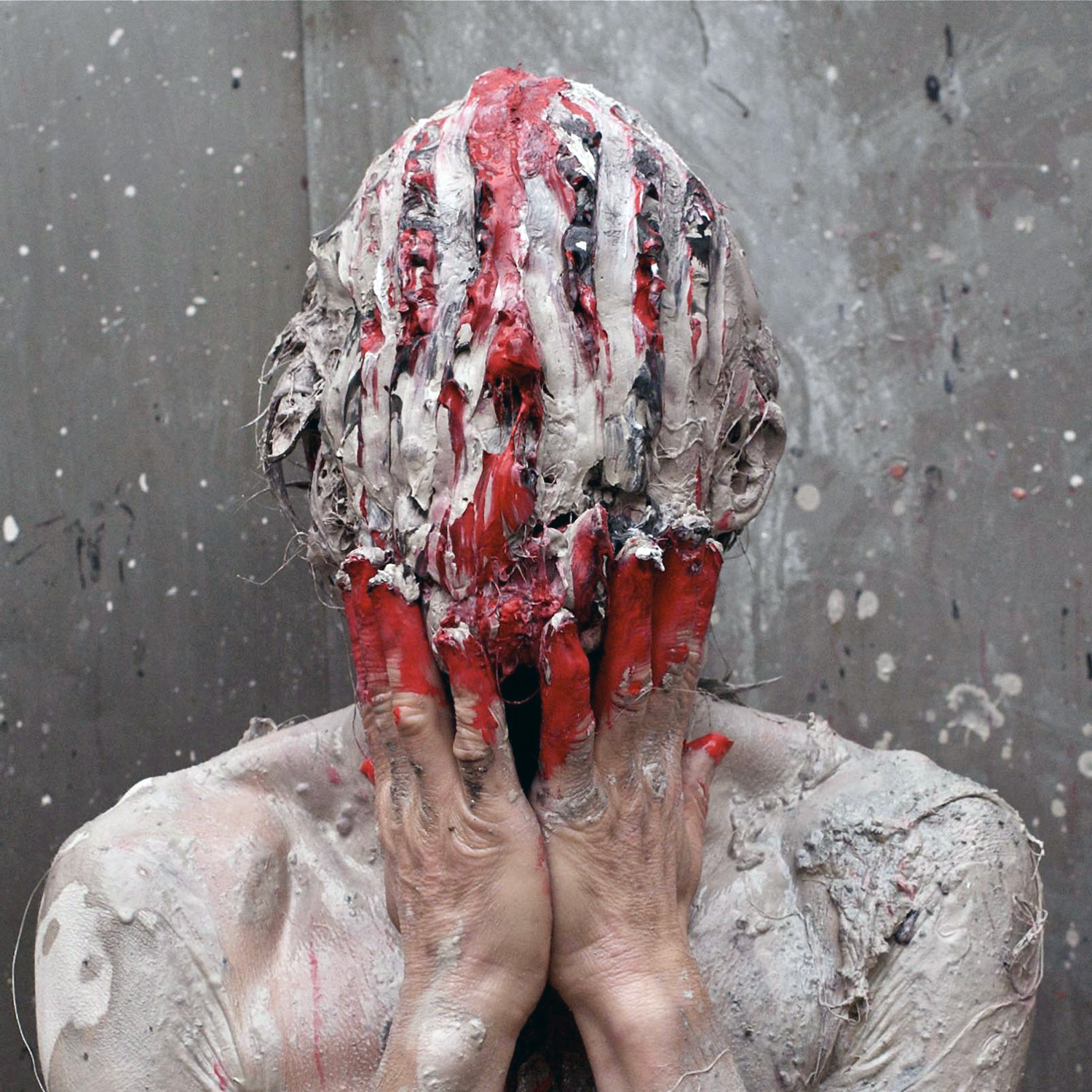 By blinding himself in each performance, de Sagazan allows himself room to improvise.

You are probably familiar with Emmanuel LĂ©vinasâ€™ philosophies on the face (rapport de face Ă  face), and how the face is considered important to our understanding of the subject and Other. In your work, as you destroy the body and its subjectivity, why do you focus so much on blinding and damaging the face?

My performance “Transfiguration” consists of over-modeling the face and the body with clay. This transformation of the body, a â€śdeterritorializationâ€ť as Deleuze would say, becoming a blind person, is a means to synchronize my nervous system to a primal or primitive visual formâ€”Iâ€™m not sure how to say itâ€”to retrieve an animalistic view of language. I have an ellipsis to express this: “Transfiguration” is the passage of the â€śSaint Faceâ€ť into the â€śMeat Headâ€ť; here, I re-become as Artaud would say a â€śbody without organs,â€ť a totipotent body, a body of all possibilities, a hideous, terrible, and magical body. By the effacement of the face and its reconstruction, I want to reveal all the enigma of a face, and thus of the Being which animates it. For me, the disfiguration in art isnâ€™t a hostile act towards Life: conversely, the effacement is a measure of loss, and the transformation a measure of strength. 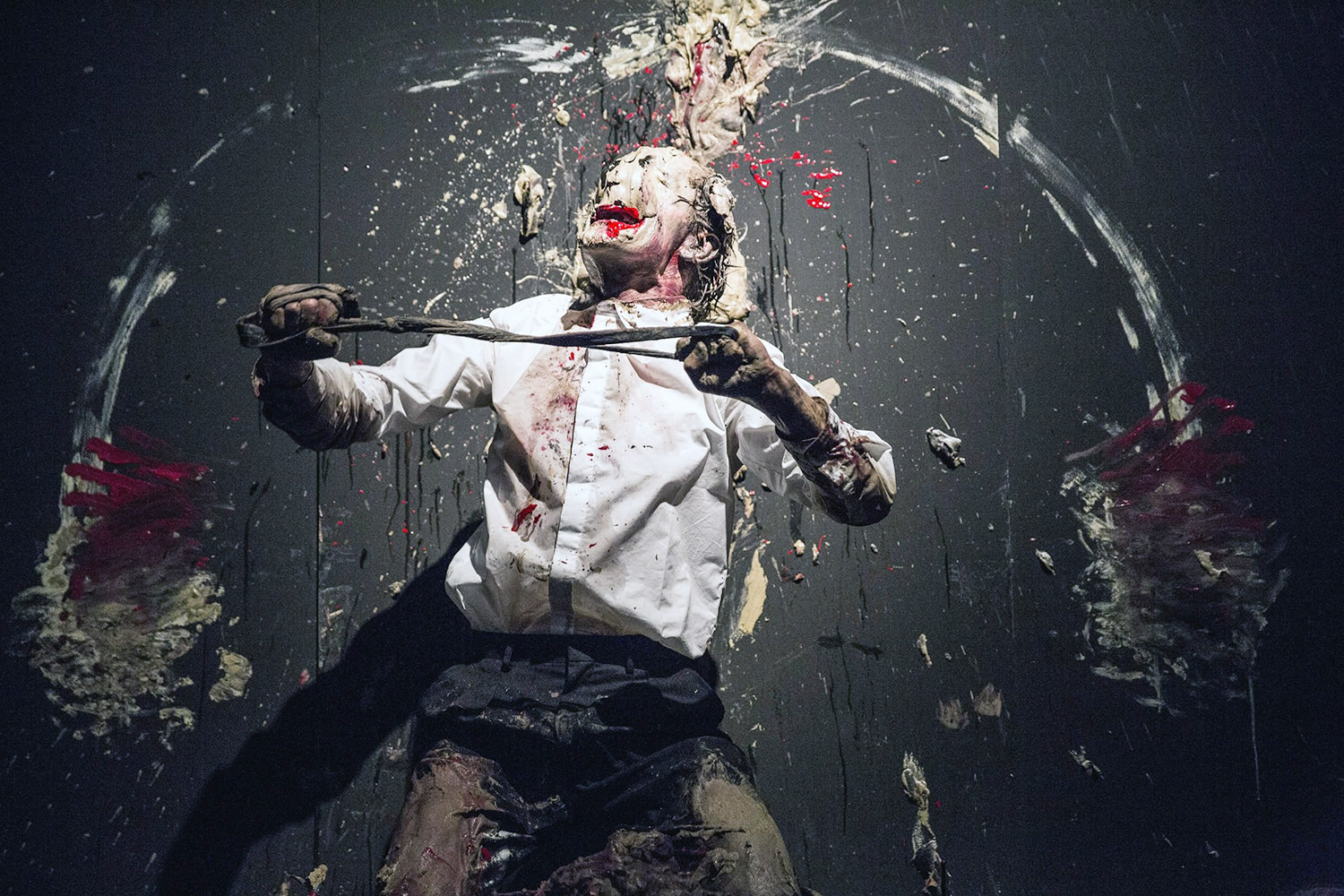 Through acts of self-inflicted violence, de Sagazan transforms the body into an expressionist masterpiece.

How do you feel after a performance?

Happy to have told people about the things that seem essential and vital to me in my heart.

Is there anything you do afterwards to return to language, sanity, and â€śreality?â€ť

Returning to language happens quickly and naturally, without a doubt too fast since itâ€™s followed by a feeling of great solitude, despite often receiving numerous thanks from the public. 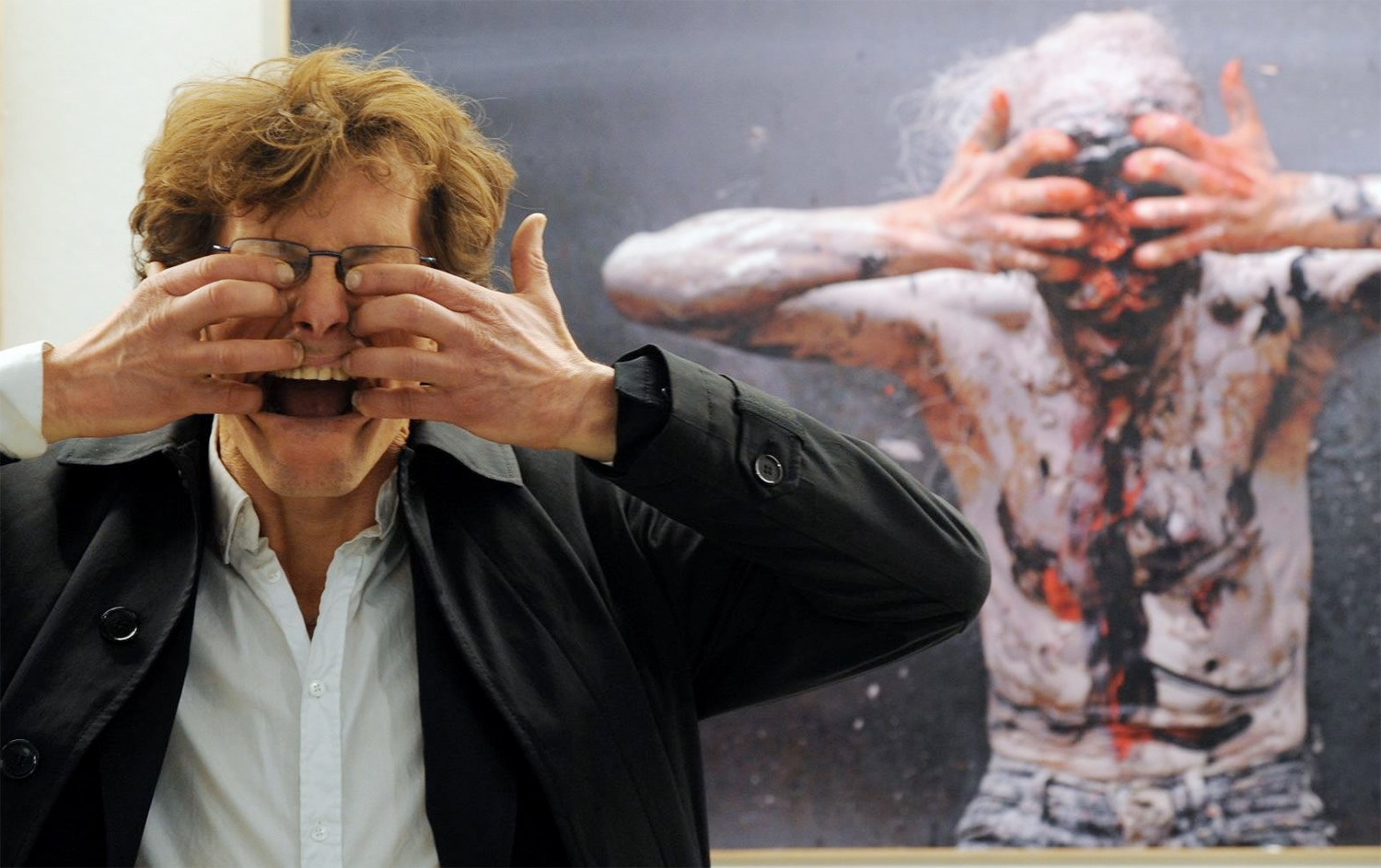 De Sagazan and one of his paintings, which captures the aesthetic of “Transfiguration.”

What projects or performances can we look forward to in 2017?

I would like to find a residence to work with previous students whom I worked with in the masterclasses I gave, to set up a performance in the style of “Transfiguration,” but with multiple artists: I think it could be very impressive.