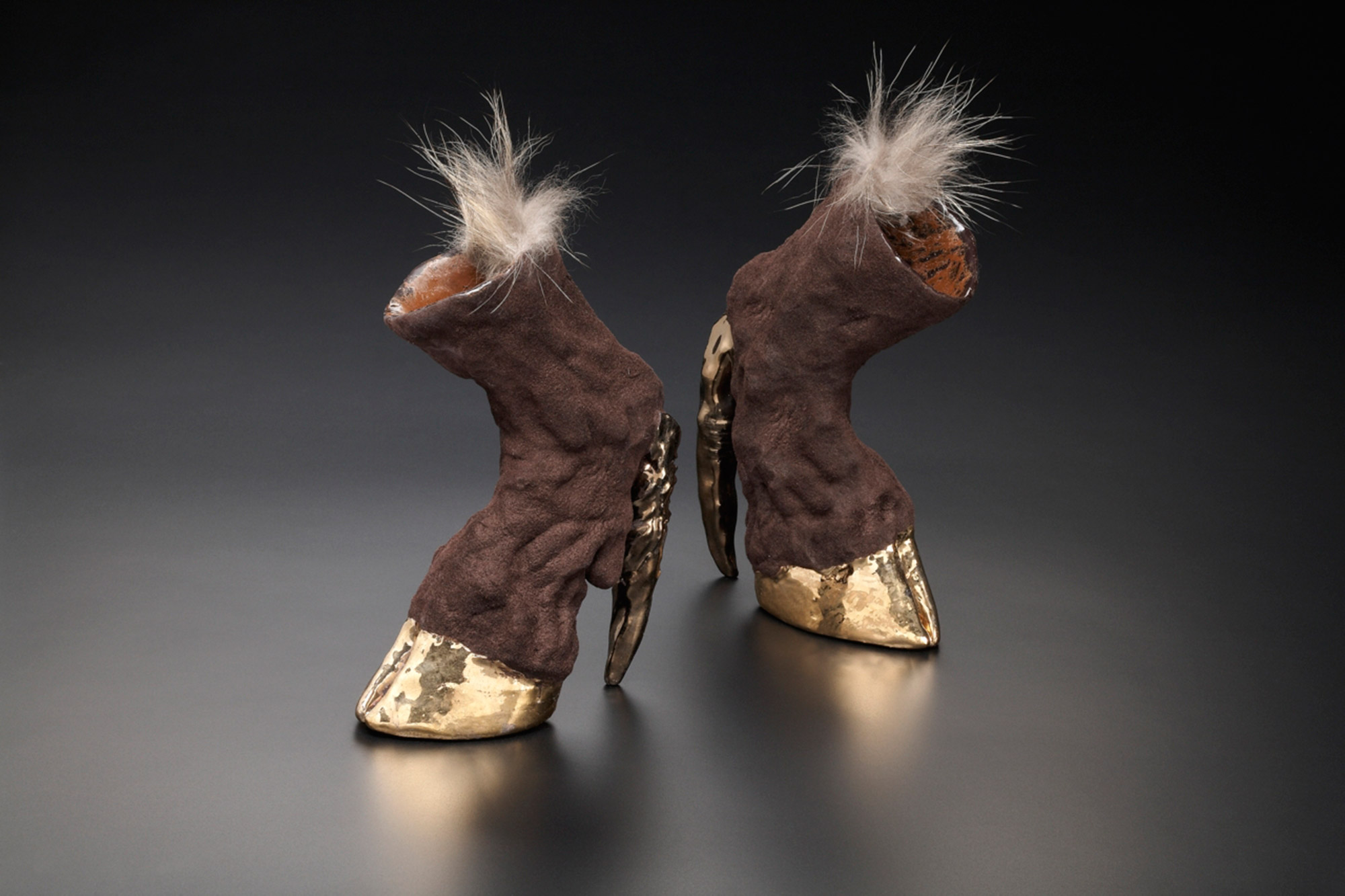 The art of taxidermy has been practiced for a long time; the ancient Egyptians embalmed and entombed cats, birds, and other creatures. Over the millennia, animals have been mounted as huntersâ€™ trophies and museum artifacts. It is an odd practice, one that is traditionally pulled between human pride, symbolism, and a desire to memorialize deceased representations of the wilderness.

In 2004, Sarina Brewer, in collaboration with Scott Bibus and Robert Marbury, created a new genre of sculpture that dramatically changed the way taxidermy materials are used: they mixed fur, mummified remains, and bones together with sculptural objects. They coined it “rogue taxidermy,” and thus started an artistic movement that birthed everything from uncanny hybrids to visual abstractions with a pop-surrealist flair.

Featured here is collection of rogue taxidermists who create imaginative (and often bizarre) sculptures. Interestingly, this movement has been largely practiced by women. It should also be noted that rogue taxidermy is driven by the principles of recycling, waste reduction, and the use of ethical sources.

Top: Iris Schieferstein makes gruesome, ornate heels using the feet of animals that have been butchered. 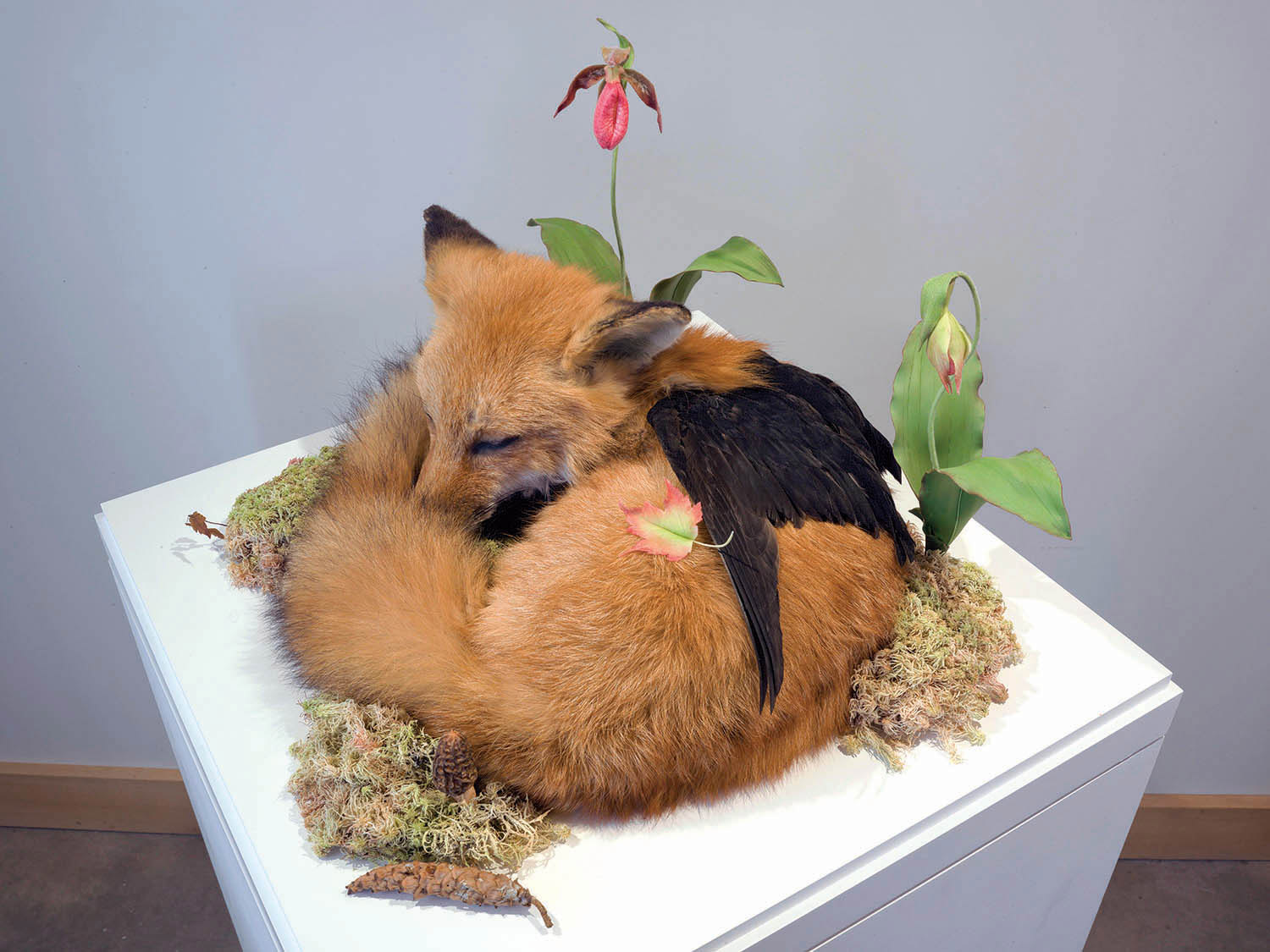 The mystical creations of James Prosek are sensitive works of art, often mixed with a sense of peace and mourning. The plant imagery connects the animals to the environments in which they once participated. Prosek’s paintings also explore his background as a conservationist, depicting realistic, field-guide-style profiles of animals. 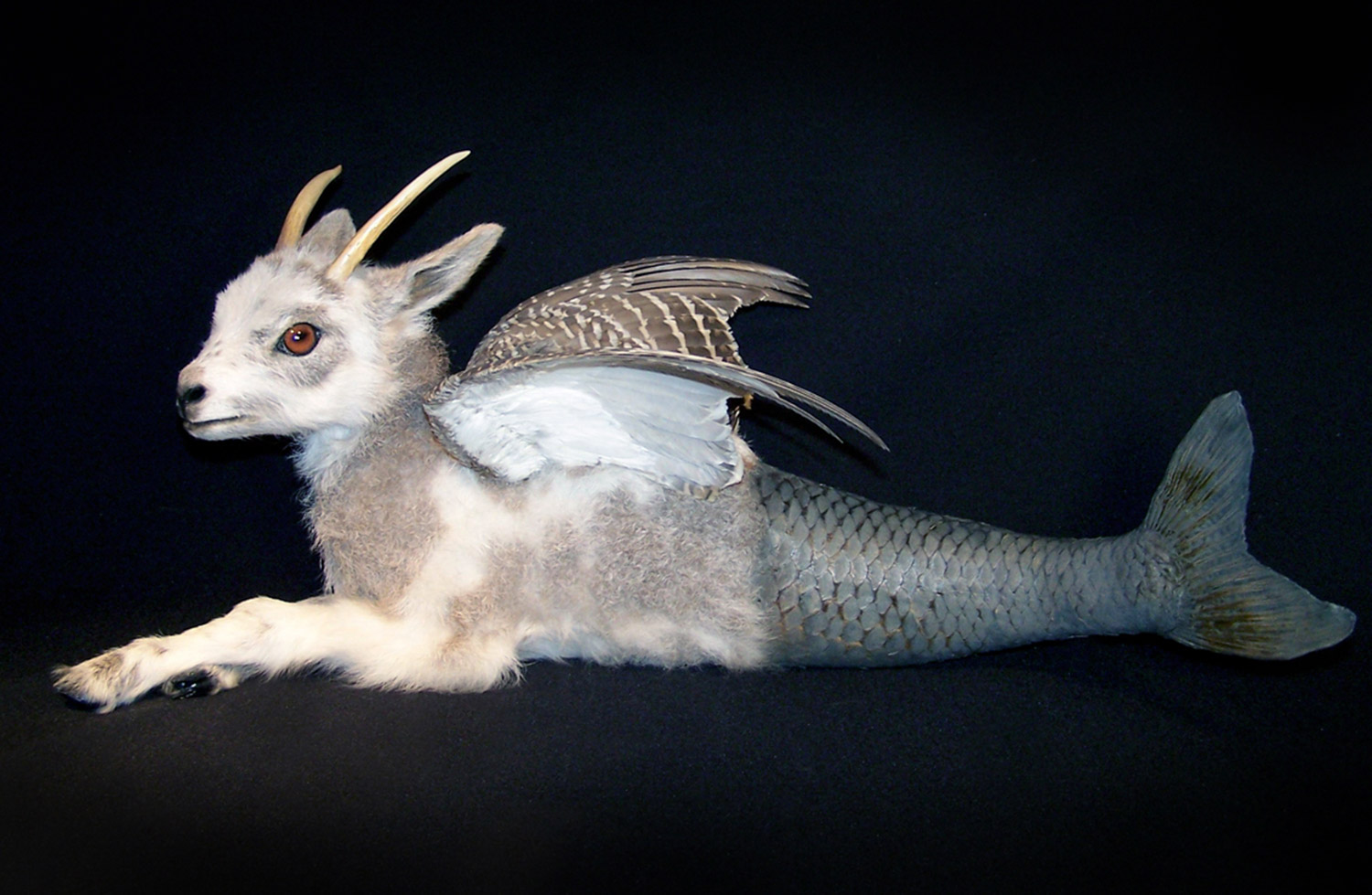 “Nothing that was once living should be wasted or taken for granted,” states Brewer.

Sarina Brewer is an artist and naturalist who has long been fascinated by animals, mythology, and funerary rituals. Rooting her work in her knowledge of biology and appreciation for the bizarre, Brewer sculpts fantasy creatures and carnival curiosities. She also practices â€śesodermy,â€ť which is the preservation of animal body parts that are typically discarded in the taxidermy process. 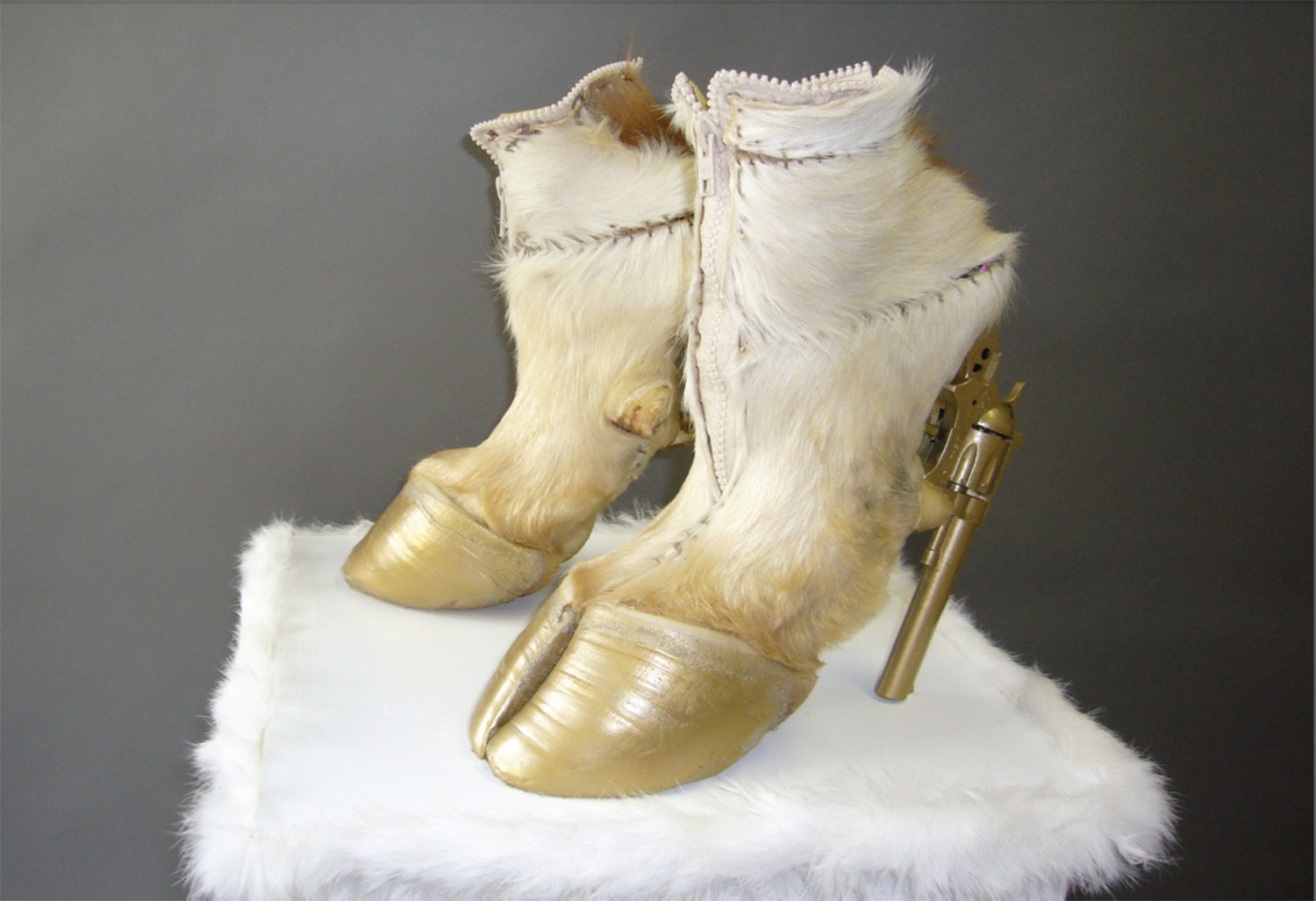 Iris Schieferstein’s “hoof heels” are wearable, but can only be worn for a short time due to how uncomfortable they are.

Using dead animal parts, German artist Iris Schieferstein â€śgives a new face to death.â€ť She has created a series of zippered, heeled shoes made from the discarded feet of hooved animals. Embedding them with religious imagery and guns, Schiefersteinâ€™s morbid couture has been deemed controversial. 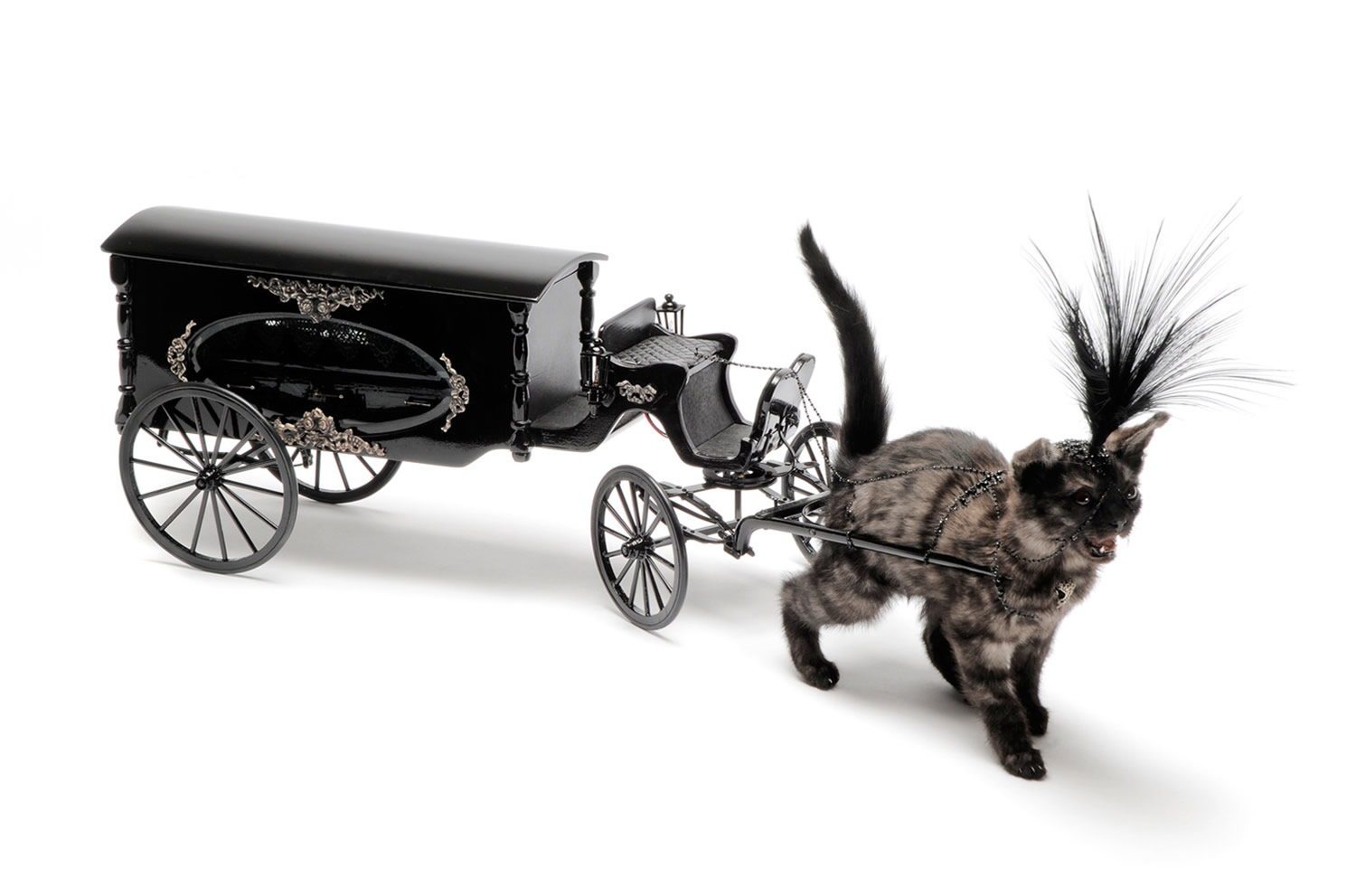 Julia deVilleâ€™s style is inspired by mementos moriâ€”reflections on the fragility of life.

Julia deVille works with taxidermy (in addition to silversmithing) as a means of exploring and uncovering death. For her, taxidermy is a means of respecting and appreciating all lifeâ€”both human and non-human. Similar to Schieferstein, she hybridizes deceased animals with fashion objects, mounting them in creative ways that recall their lives in emotional ways. 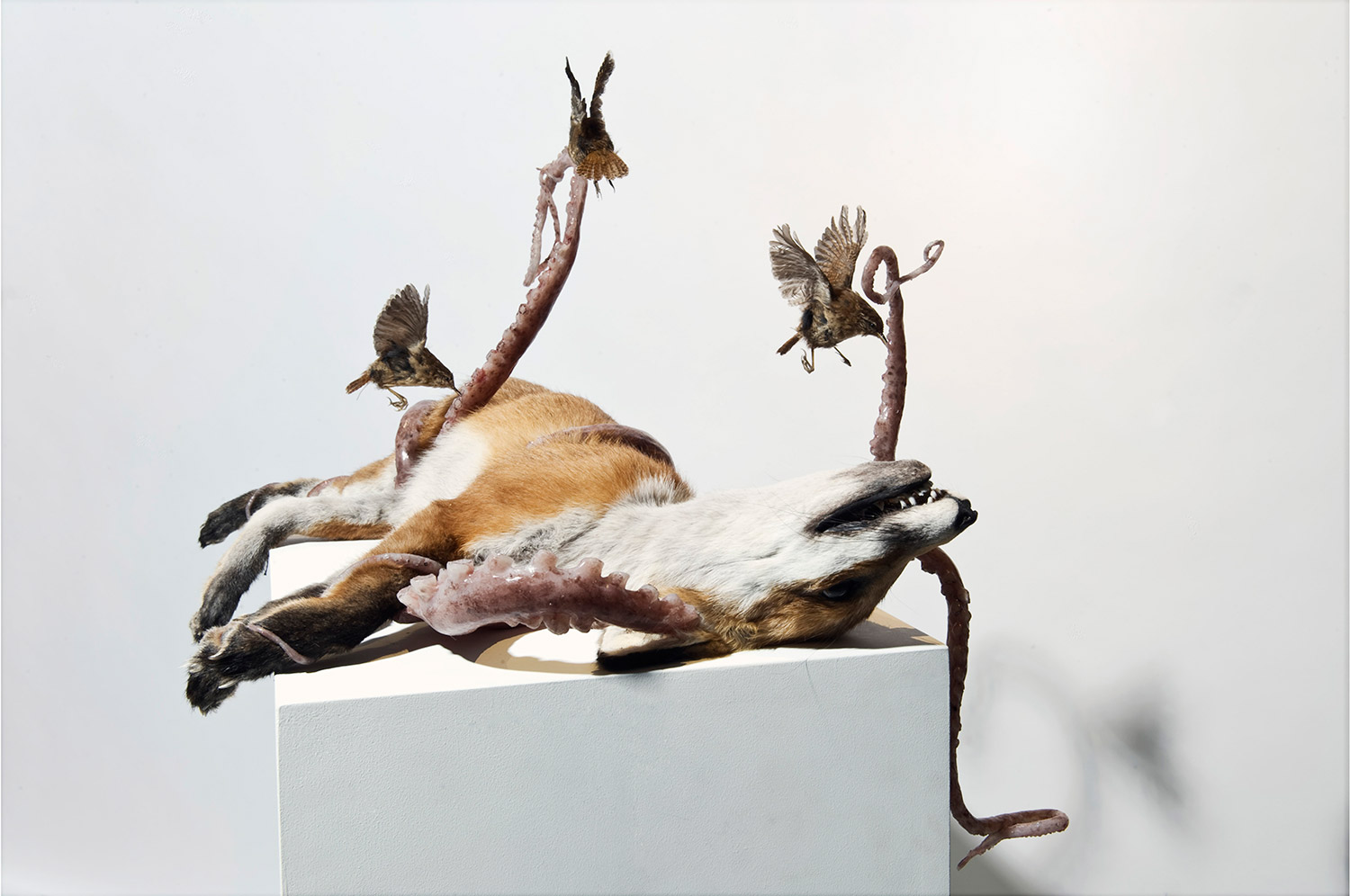 The octopus limbs sprouting out of the dead fox intentionally (and disturbingly) resemble intestines and genitalia.

Once a student of English Literature, Polly Morgan began her taxidermy work in 2004. Her literary background may seem unusual given her current line of workâ€”that is, until you see the amount of story and symbolism she packs into her work. Like actors in a grotesque theatre, dead birds lay splayed out in bell jars, or cram together in ice cream scoops and telephones. Morgan has a knack for the visceral and strange. 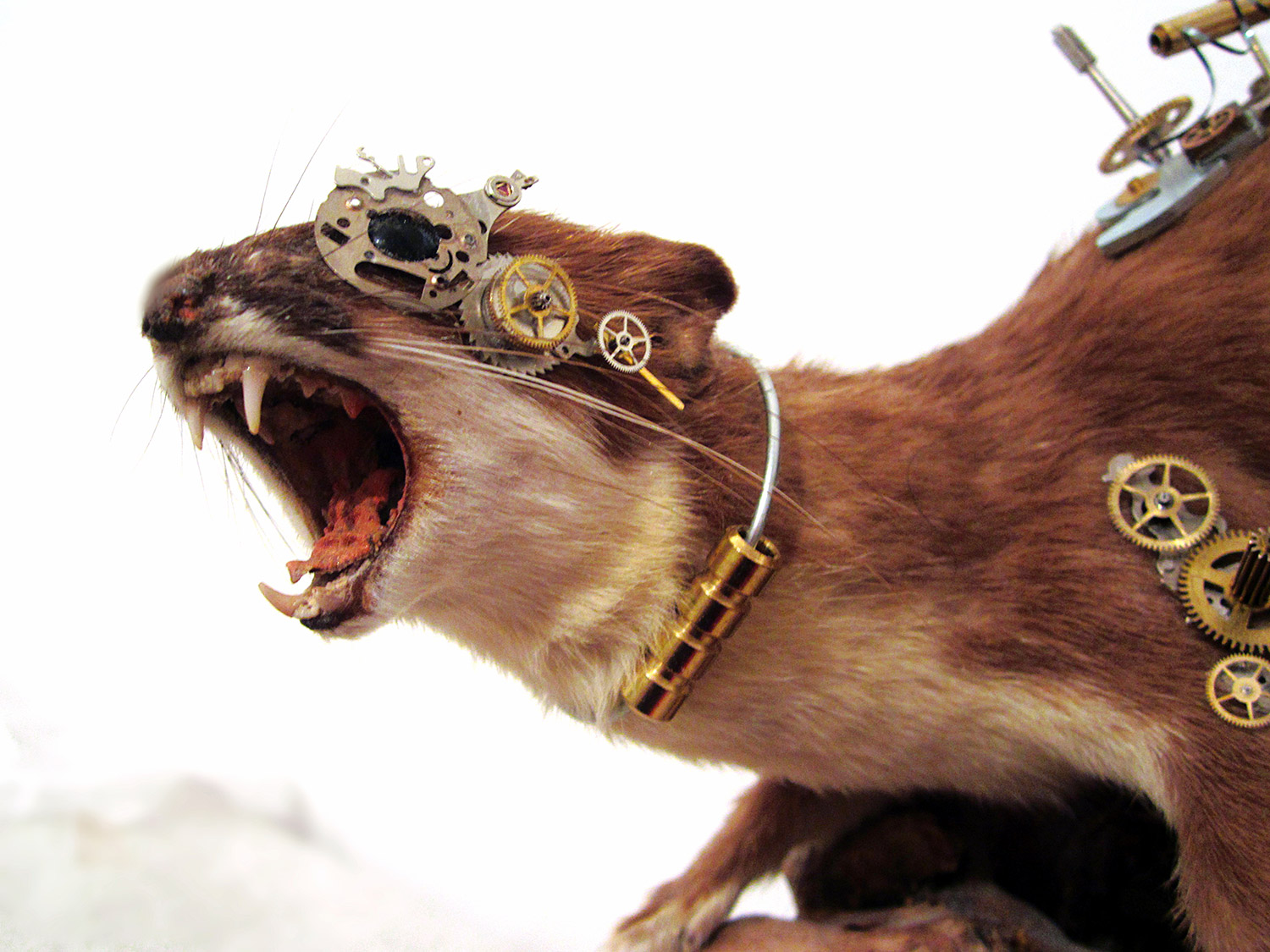 Oddity Avenue began his work when a Victorian taxidermy piece was nearly thrown away due to having a missing eye and broken leg. Inspired, the artist began acquiring taxidermy objects from auctions, family members, and friends, incorporating the different specimens into curio sculptures. Among hisÂ creations are mythological creatures and animal-headed wooden dolls. 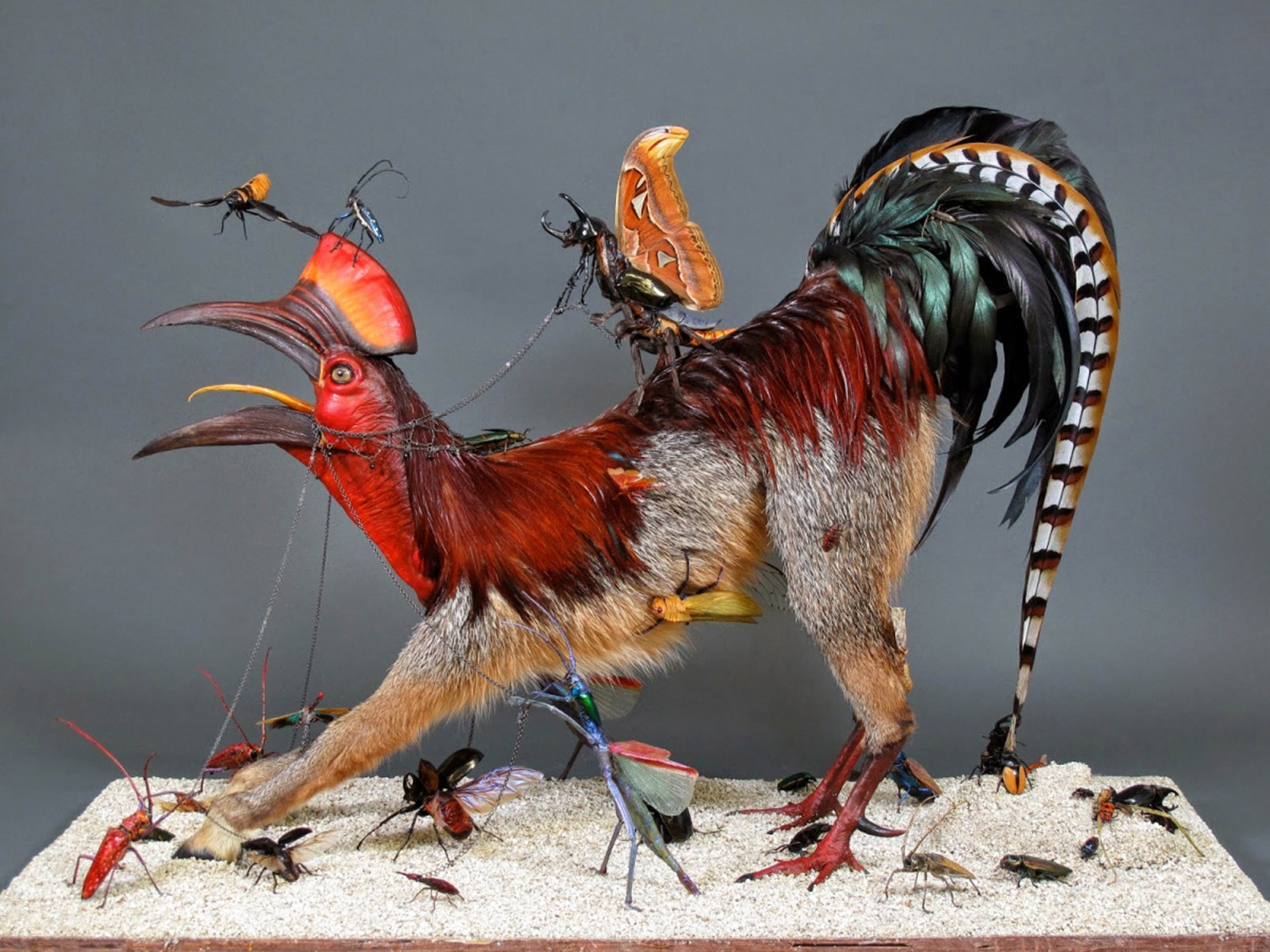 The taxidermied objects of outlaw artist Gomez de Molina are famous for a of couple reasons.

Joy and despair blend together in Enrique Gomez de Molinaâ€™s colorful chimeras. The artist feels happiness when creating creatures of mythical power and beauty, but saddened about the loss, sacrifice, and destruction that permeates life. Gomez de Molina is somewhat infamous; he spent 20 months in jail for trafficking endangered wildlife. He pled guilty, but claimed his intentions were ultimately good, as he sought to bring awareness to threatened species. 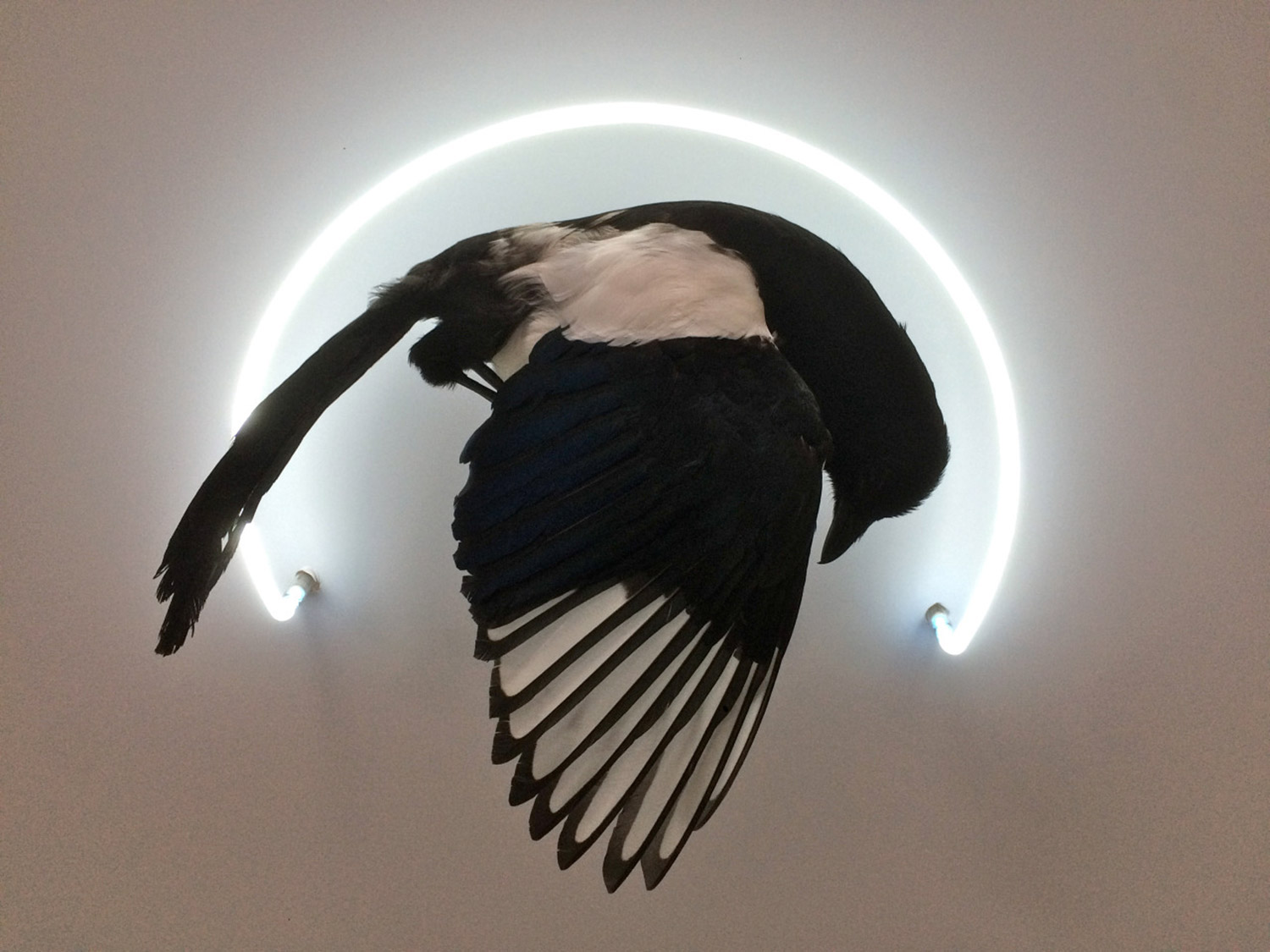 Harriet Horton takes a very modern approach to taxidermy, removing animals from naturalized contexts and putting them in artificial and pop-art-style environments. Many of her sculptures are neon-colored, fluorescent-lit, and have surrealist elements, such as a squirrel with a squid enveloping its head. Her work re-examines the beauty of animals by giving them a different aesthetic. 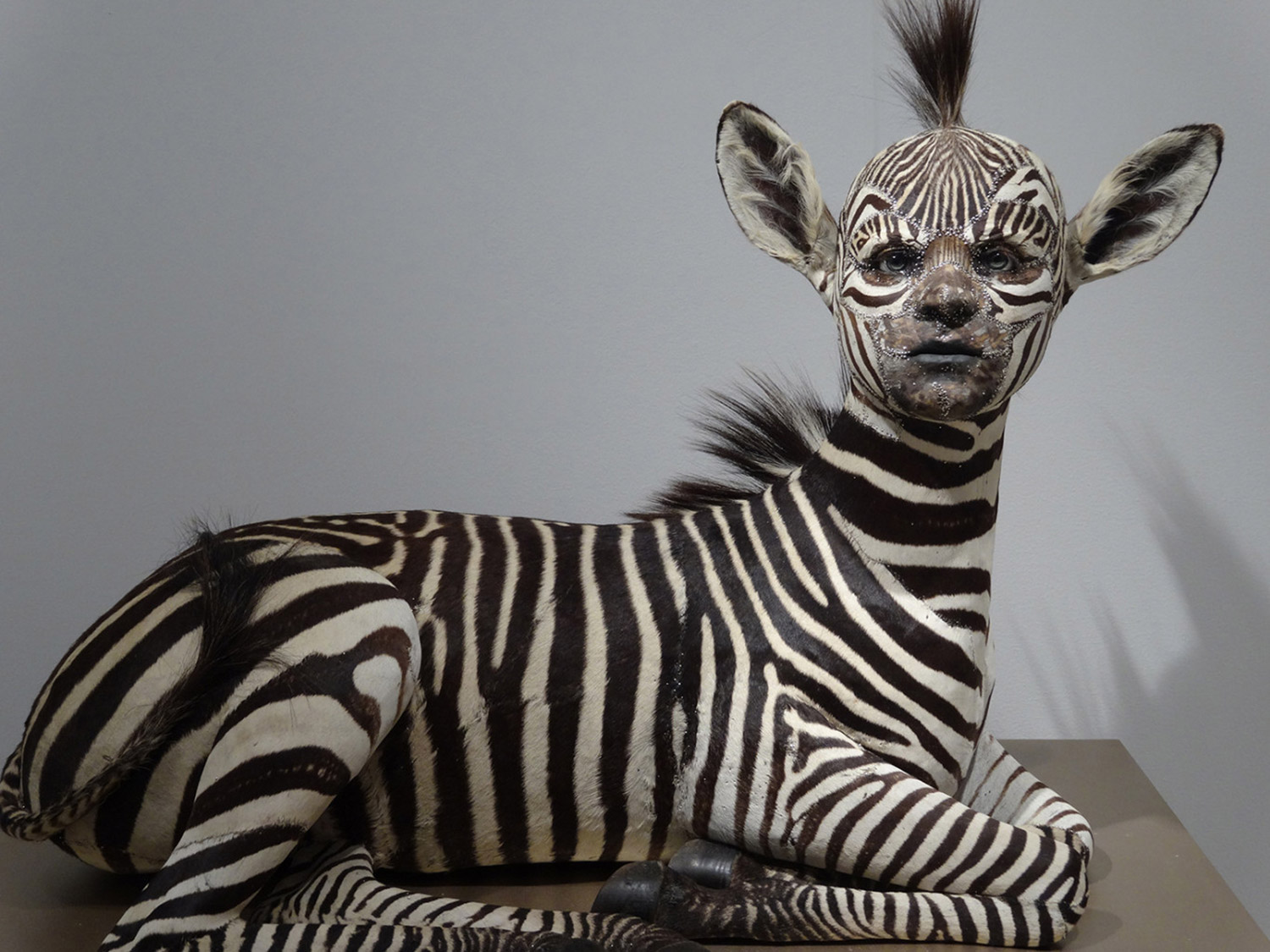 Clark often changes the gender of the animals, demonstrating human misunderstandings of the lives of animals.

Traditional taxidermy often reasserts the boundaries between humans and animals: â€śI am a human, this is my trophy-object.â€ť Brooklyn-based artist Kate Clark, however, explores rogue taxidermy as a way to break down our ideas about species categories. Using recycled animal hides that are considered too â€śimperfectâ€ť to mount, she turns them into sculptures with human faces. The steady gazes produce empathy in the viewer, confronting us with the truth that we are all just animals wandering around on the face of the earth. 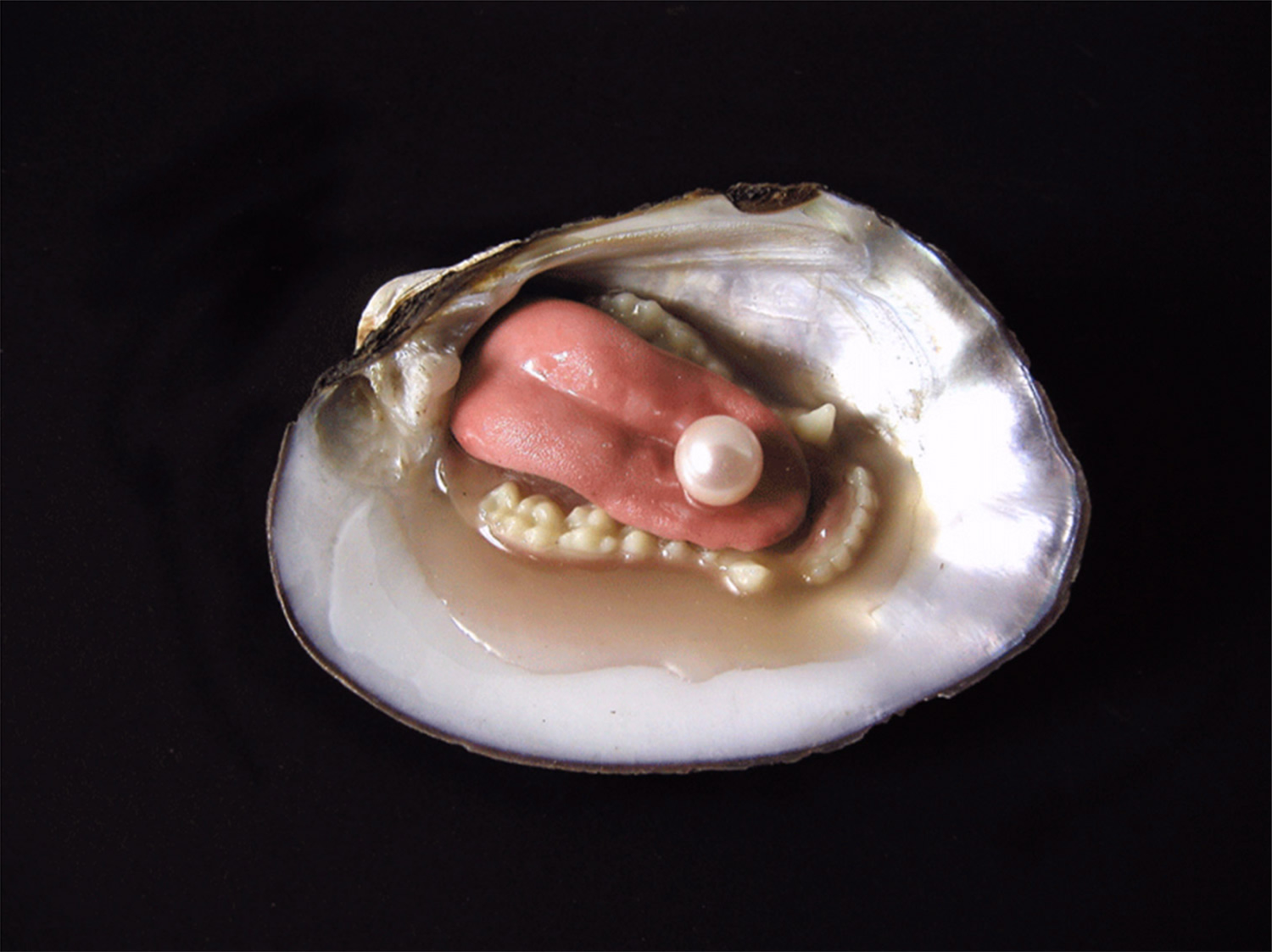 Dessert, anyone? Day’s tongues and clams are deliciously off-putting.

E.V. Day is a New York-based artist who works in many mediums, but sometimes uses taxidermied objects and resin casts of animal bones to create stunning sculptures and hanging installations. Her “Tongues and Clams” series consists of clam shells, abalone, animal jaws, mother-of-pearl, and resin fused together to create oozing, edgy representations of sexuality and gender. Her eclectic use of materials demonstrates the flexibility of rogue taxidermy in making a creative, critical point.