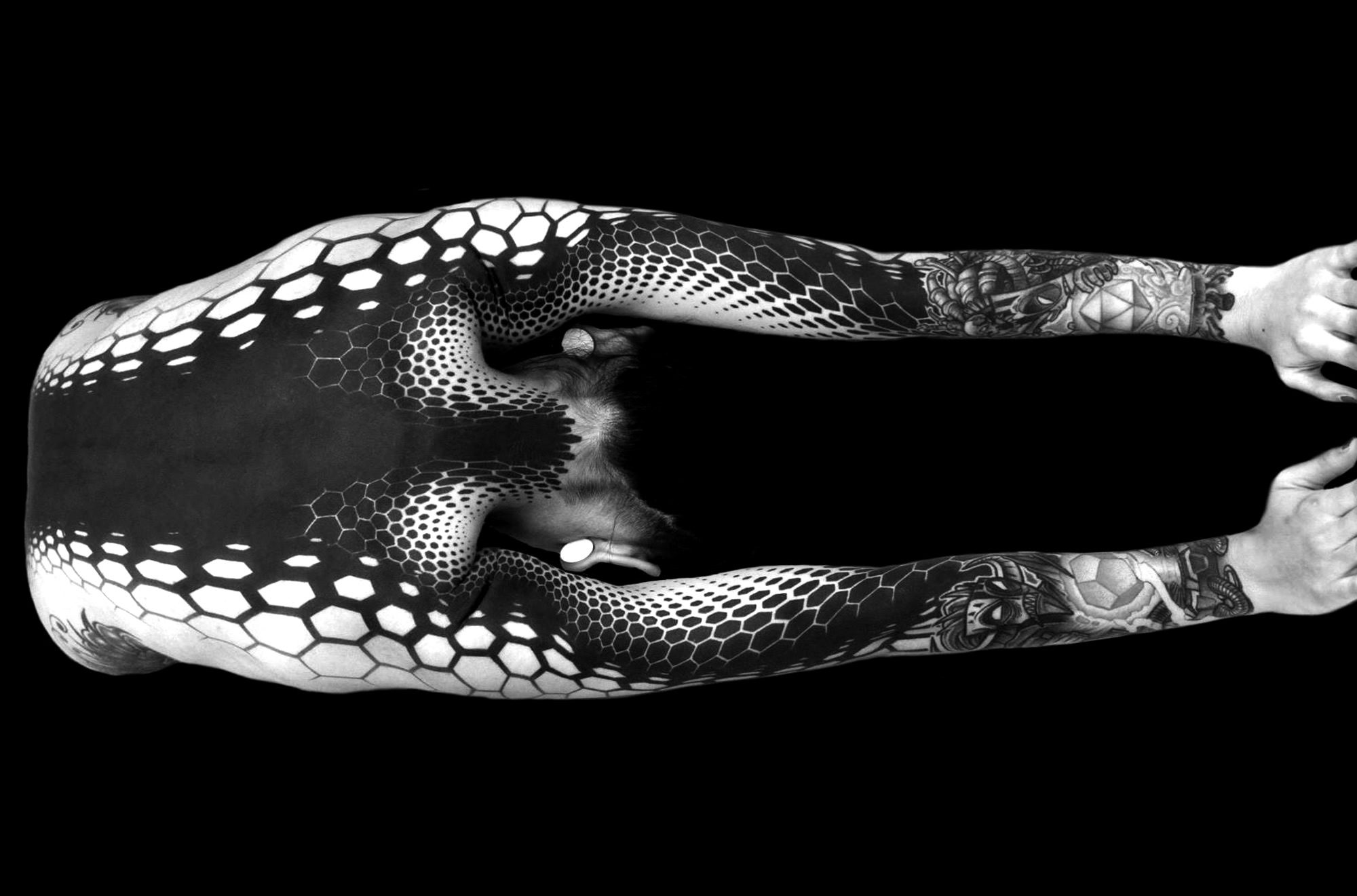 Geometric shapes are the building blocks of our world, and their brilliant simplicity makes them a popular choice for tattoos. Their historical acknowledgement reaches as far back as ancient Greece, a civilization that gave the field its name‚Äîgeo- meaning ‚Äúearth‚Äù and –metron meaning ‚Äúmeasurement‚Äù‚Äîand studied spatial relationships.

Geometry was revolutionized by Euclid, the man considered the ‚Äúfather‚Äù of the subject. He introduced mathematics to the formerly compass and straightedge constructions, propelling geometry to what we know today‚Äîcomplex and abstract patterns that mesmerize with their detail. Their forms define us and the natural world, a concept that takes on a whole new meaning with body art. Tattoo artists create geometric designs that span backs, shoulders, arms, and legs to remind us that the root of who we are is wrapped up in these intricate formations.

Above: NEO’s arm and leg-spanning tattoos seems to open up the person from their center. 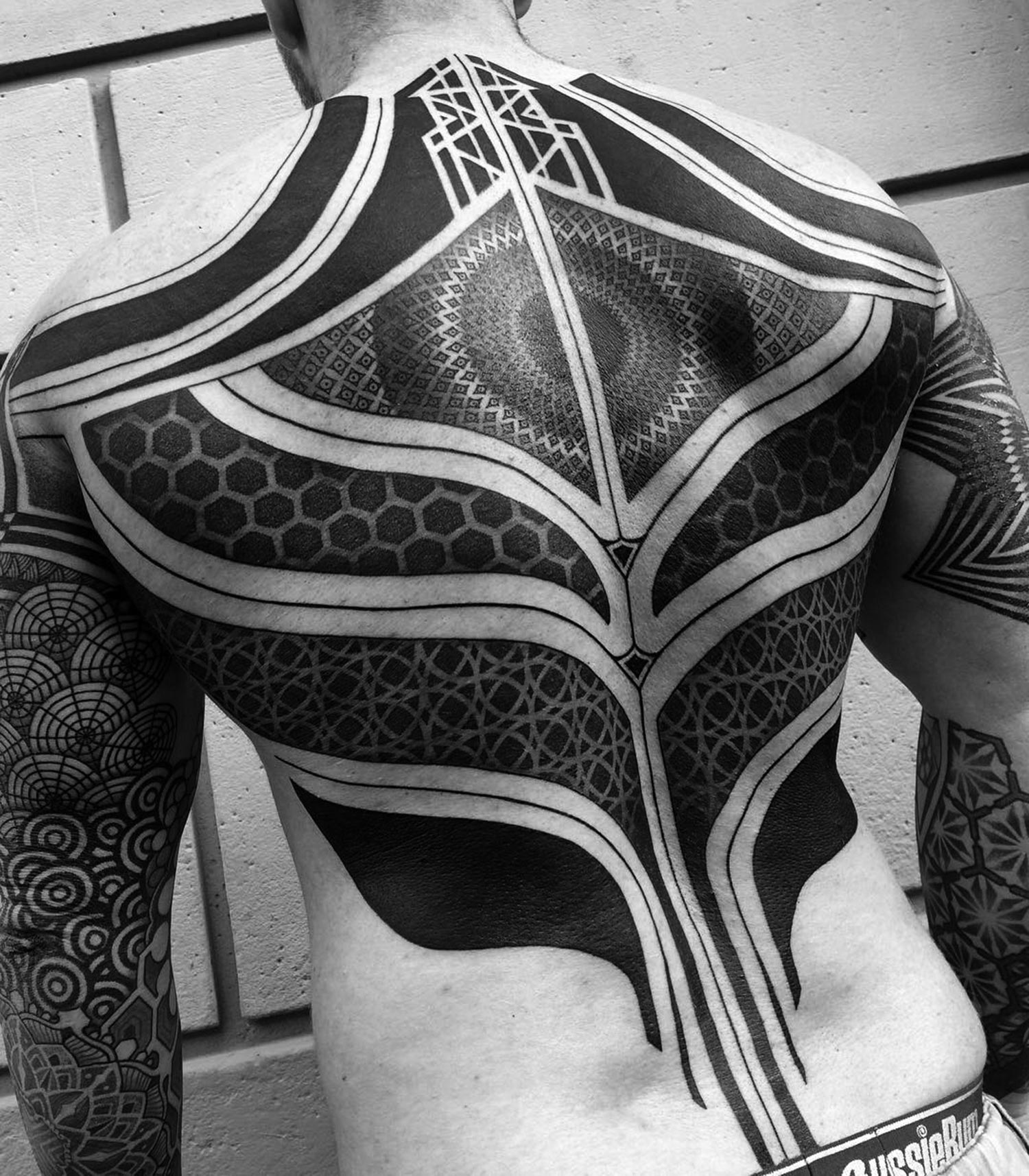 Thanks to careful shading, some elements look as though they’re a second layer of skin. 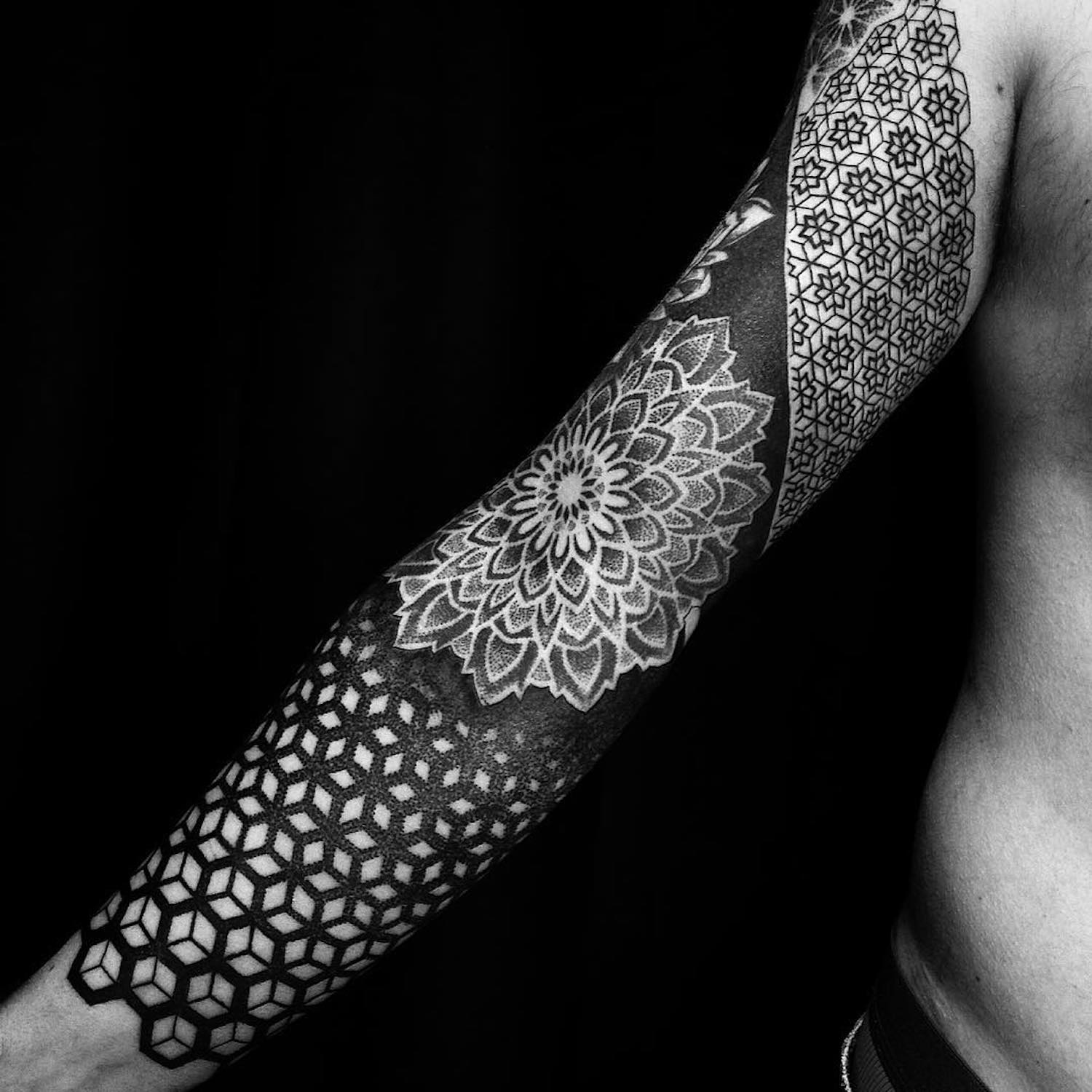 Caco Menegaz looks at tattooing as a form of spirituality, a way of honoring our lives and bodies. “Our body,” he writes, “our only carrying good until the end of our life on Earth, serves as a tool to carry the marks of the cycles experienced.” Tattoos are a way to tell our stories that we want immortalized. He continues, “I seek to make a special and profound work that reflects the soul in the skin and marks people‚Äôs lives.” 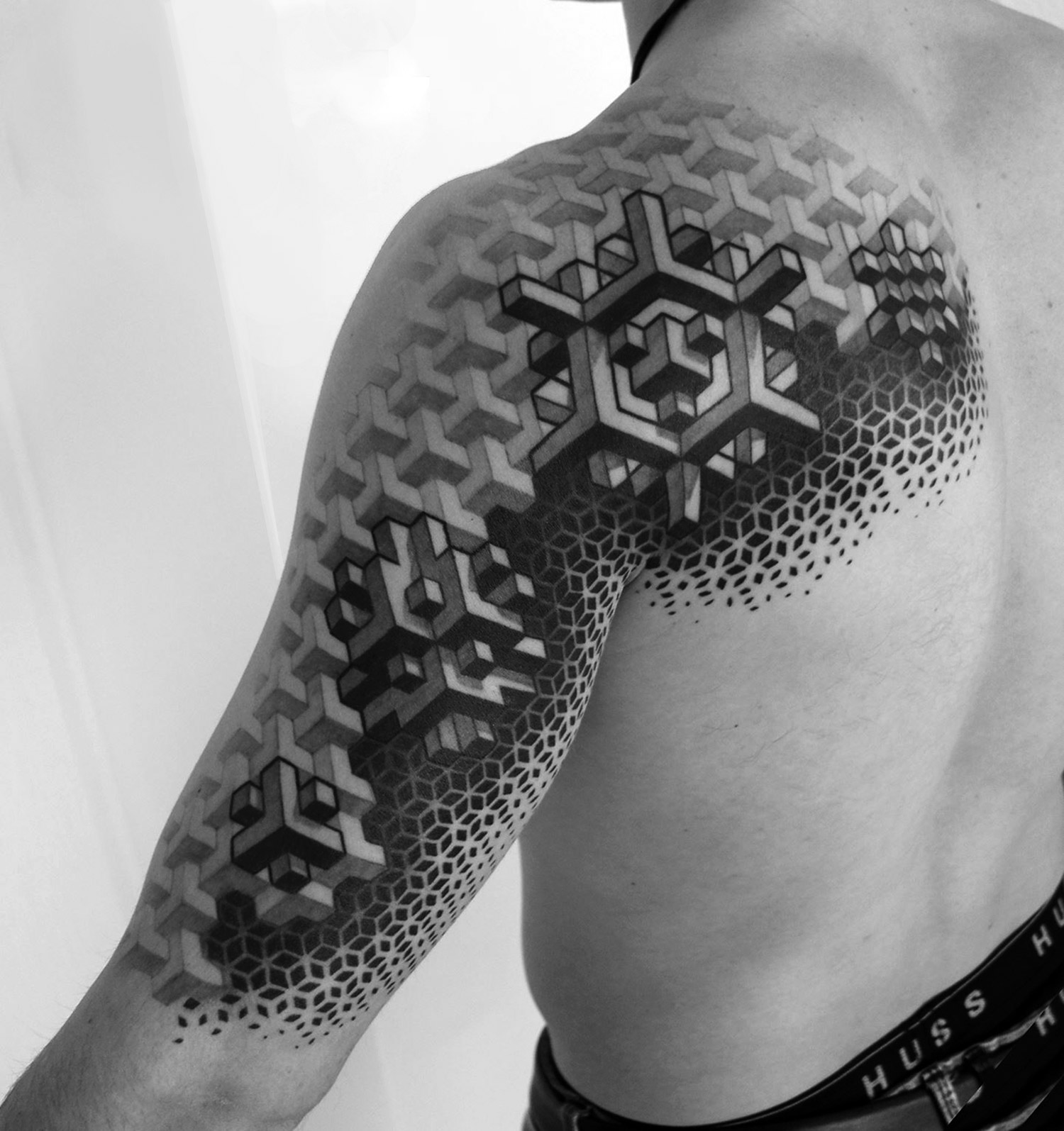 NEO’s blocky forms could be the basis of a video game.

DeLaine Neo Gilma, aka NEO, has been tattooing since the year 2000 in a style that he now describes as “geometric pattern orientated sci-fi graffiti style flavored with a heartwarming drop of comic characters and occult symbolism.” To create this unique combination, he looks to “natural rock structures, op art, ancient aliens or quantum physics” as the basis for his optical illusion body art. 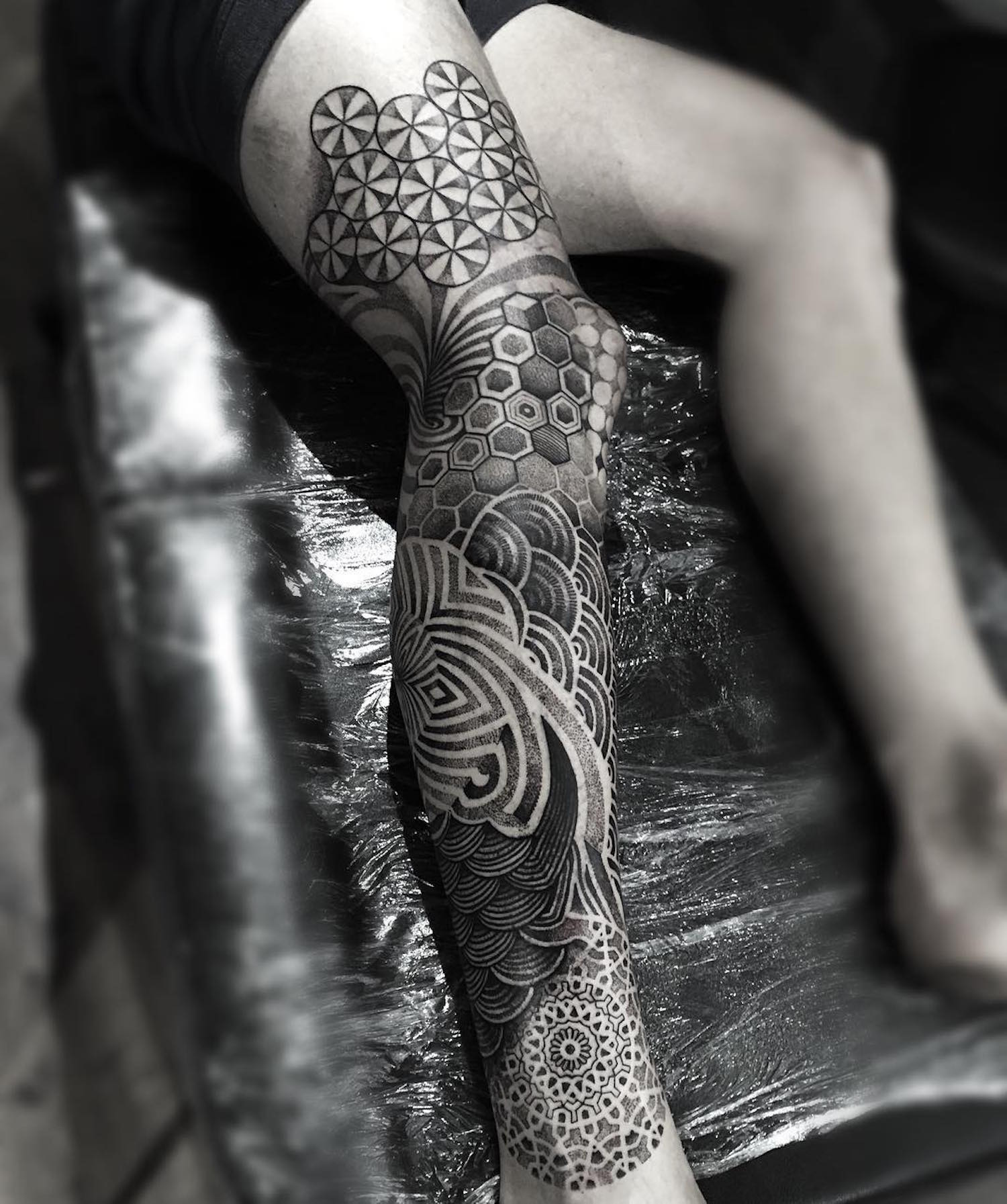 Being on the autism spectrum helps Paul Davies in an unusual way.

Paul Davies has been tattooing since roughly 2010, but only recently found out that he is on the autism spectrum. “For my job it‚Äôs a massive benefit,” he explained to TH – INK, “I‚Äôm completely focused, never want to stop working and able to think about things a little differently to other people.” This allows him to hone in on all of the tiny, intricate parts of his expansive tattoos. “I‚Äôve had a couple of artists message me saying they often feel a similar way, I wasn‚Äôt surprised to see they also specialize in patterns and geometry.”

Mandalas are often at the heart of Mark Nara’s designs.

The Mark of Nara

Mark Nara, known also as The Mark of Nara, creates “tattoos with intention.” Approaching the act with thoughtfulness, he explains, “My process involves being fully aware of the physical, metaphysical and spiritual aspects of tattooing.” The pain experienced and the new skin can have a transcendent effect. “Tattoos may very well be embraced more so for aesthetic reasons in modern society, however, they also play a fundamental role in facilitating transformations into new states of being.” 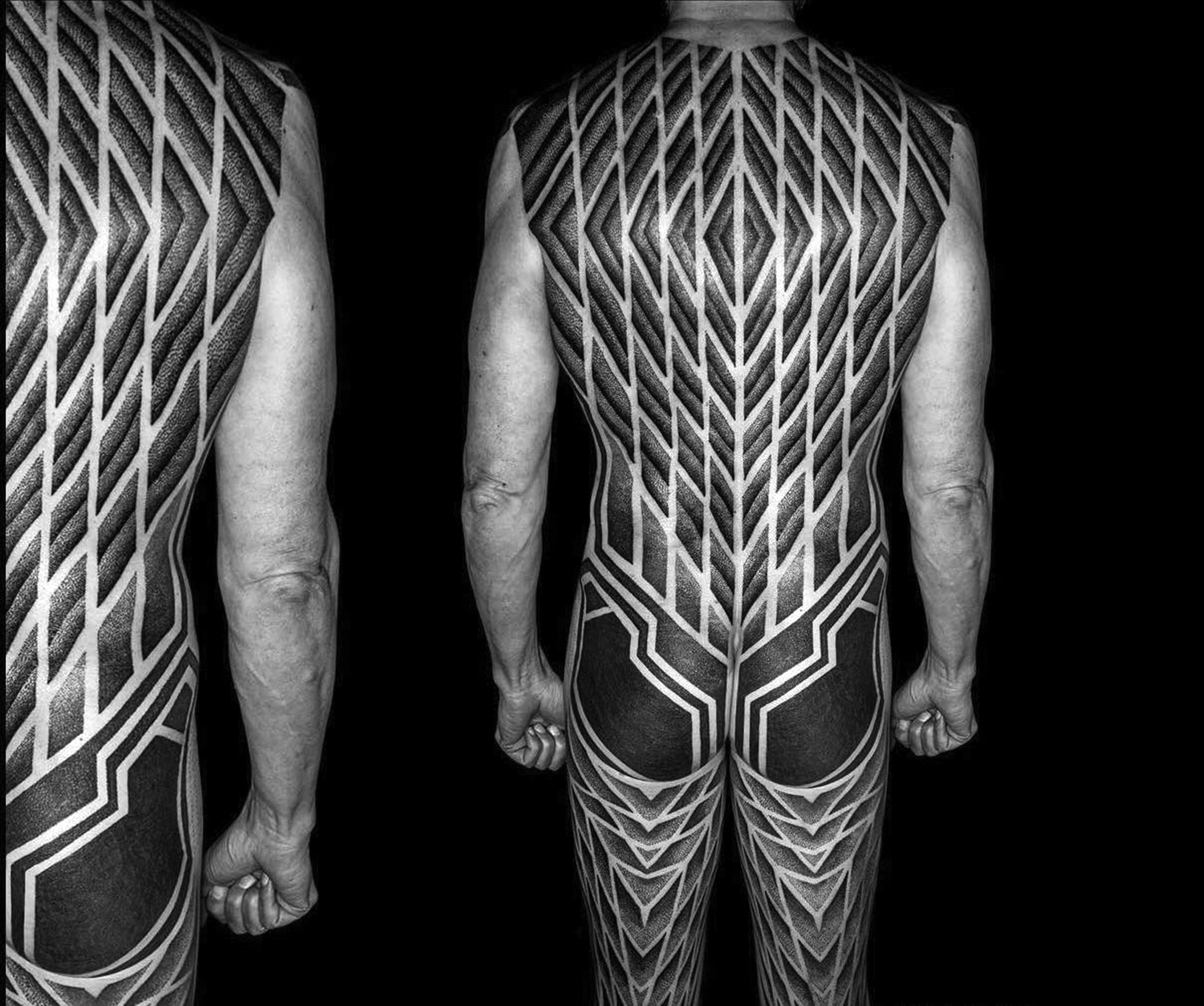 Computers are an integral park of Lewisink‚Äôs complex designs.

Lewisink began developing his geometric-based artistic style at the young age of 14, and used the field of graphic design to help him produce the complex patterns he had always wanted. “I had to learn a lot from computers to be able to create more complex patterns and geometric shapes than I could do by hand.” Once he had those skills, he started to tattoo in dotwork because it allowed him to most effectively work with the intricately-structured designs. 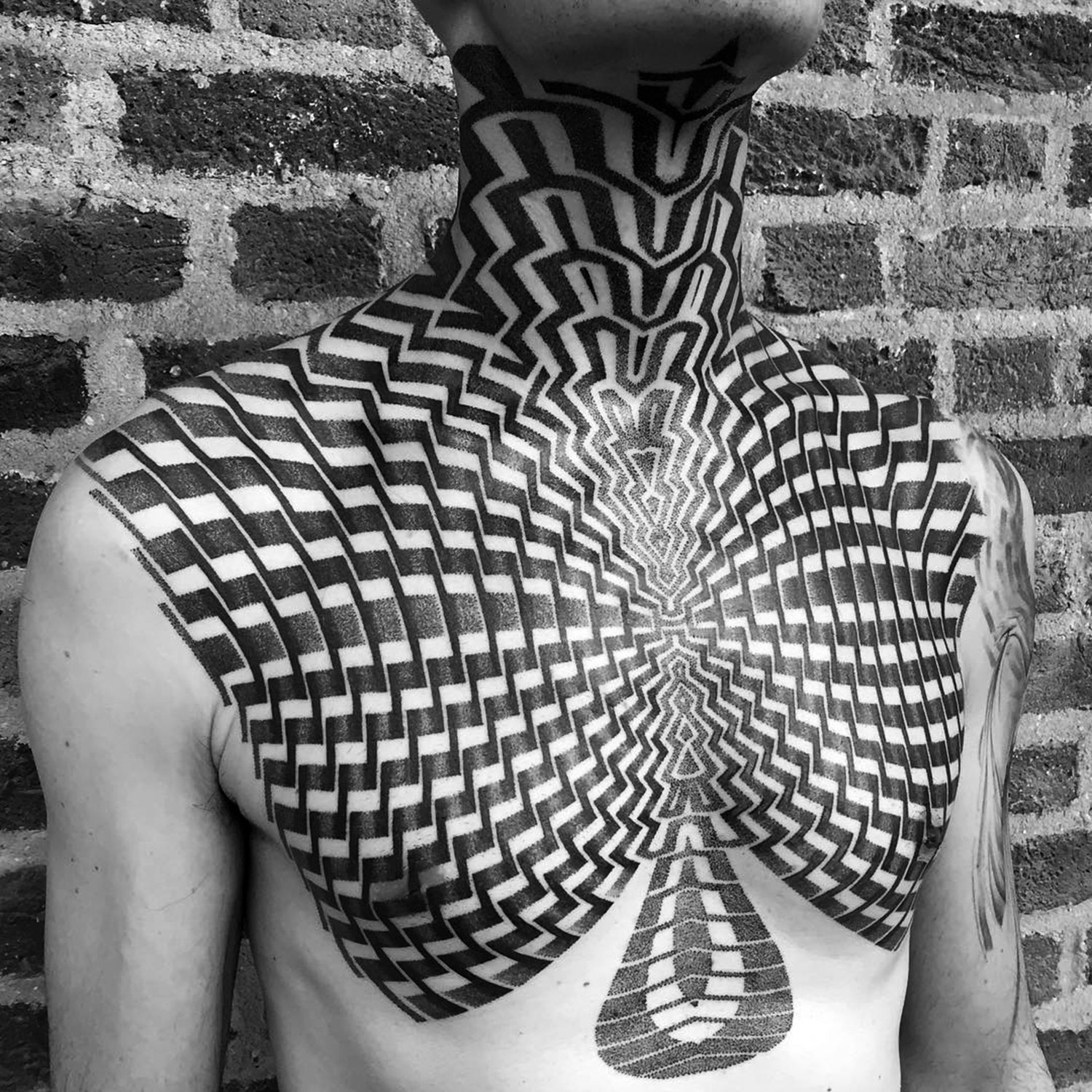 After Kenji Alucky tried tattooing with a toothbrush, he moved onto a shaving machine.

At the age of 16, Kenji Alucky fashioned a tattoo machine out of an electric toothbrush and inked his leg. Since then, he‚Äôs been in the tattooing world (getting a proper device when he turned 18), working at first in a variety of styles before getting rid of all his colors and focusing on black dotwork. His fame is international and includes some high-profile clients like Laura Jane Grace, the lead singer from punk band Against Me! 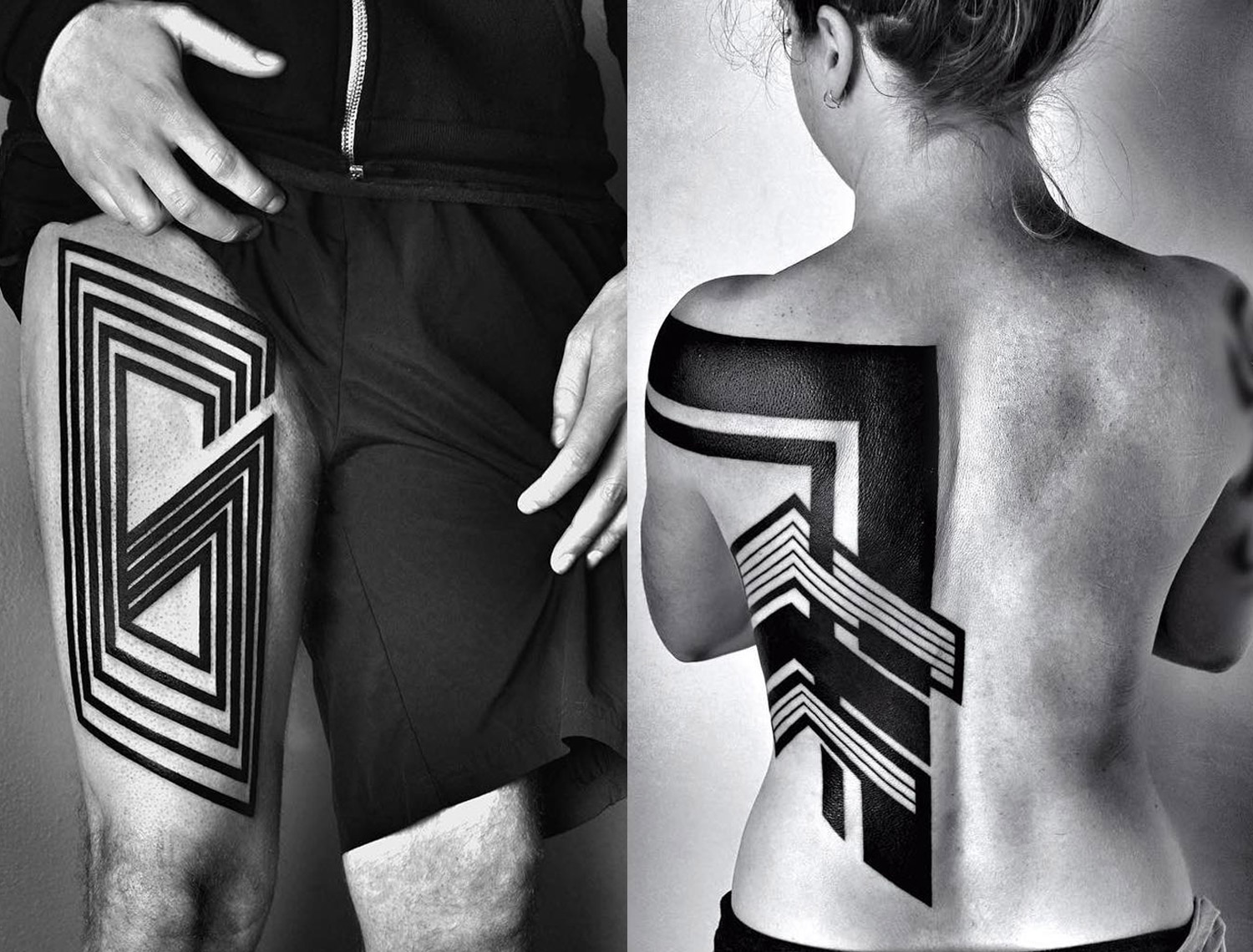 San Francisco-based artist Ben Volt infuses his blackwork geometry with “retro-futuristic motifs and landscapes,” giving a nod to spiritual iconography and tribal designs. The clean, dynamic body art feels anything but static‚Äîits balance of black ink and skin create spellbinding patterns that move your eye up and down the body. 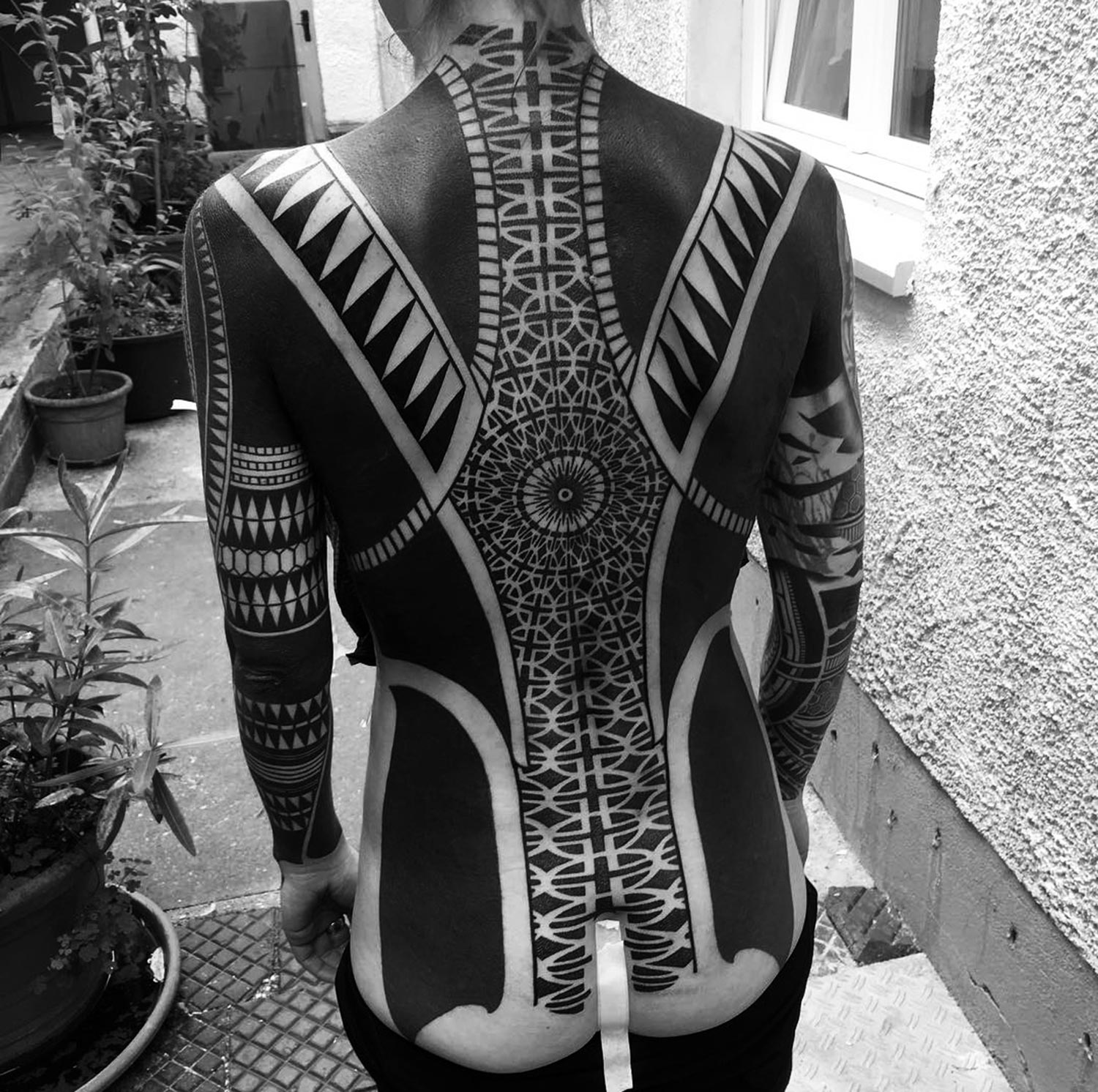 Punctuated by large fields of black ink are the geometric designs of Gerhard Wiesbeck. The dense, consuming ink finds inspiration from a myriad of places, including the South Pacific tribal culture, modern geometry, math, and graphic design. Whereas some artist focus on fine lines and delicate details, Wiesbeck‚Äôs tattoos rely on larger bold elements to make a statement. 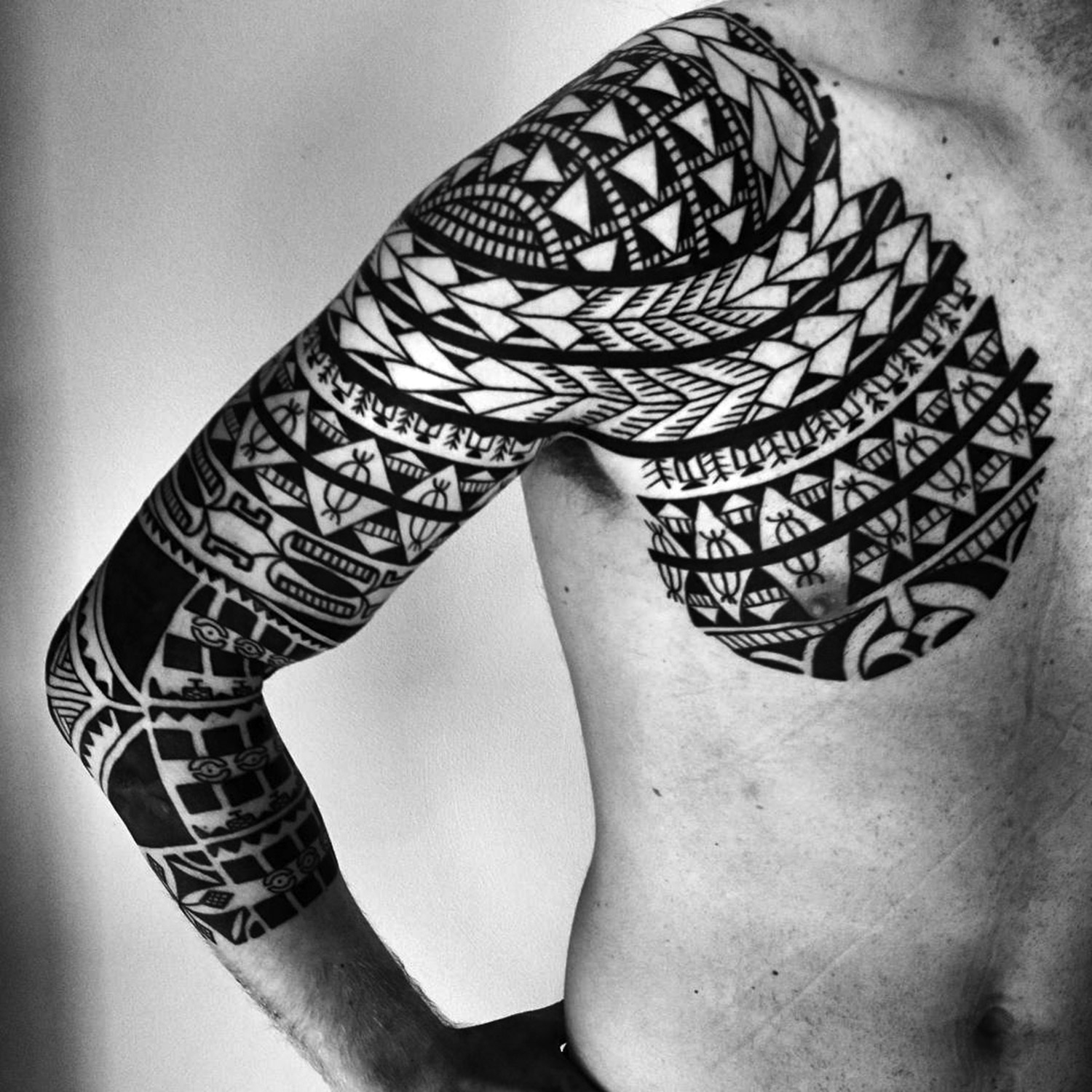 Netherlands-based artist Thierry Rossen specializes in a type of geometric approach called “Pacific Tattoo” art. This genre includes symbol-based style of the countries and societies located along the Pacific Ocean that include Borneo and Micronesia. Polynesian imagery, including tribal emblems and masks are seen throughout Rossen‚Äôs repeating designs like you‚Äôd find in a temple‚Äîa subtle reminder that our bodies are sacred and we should treat them as such.