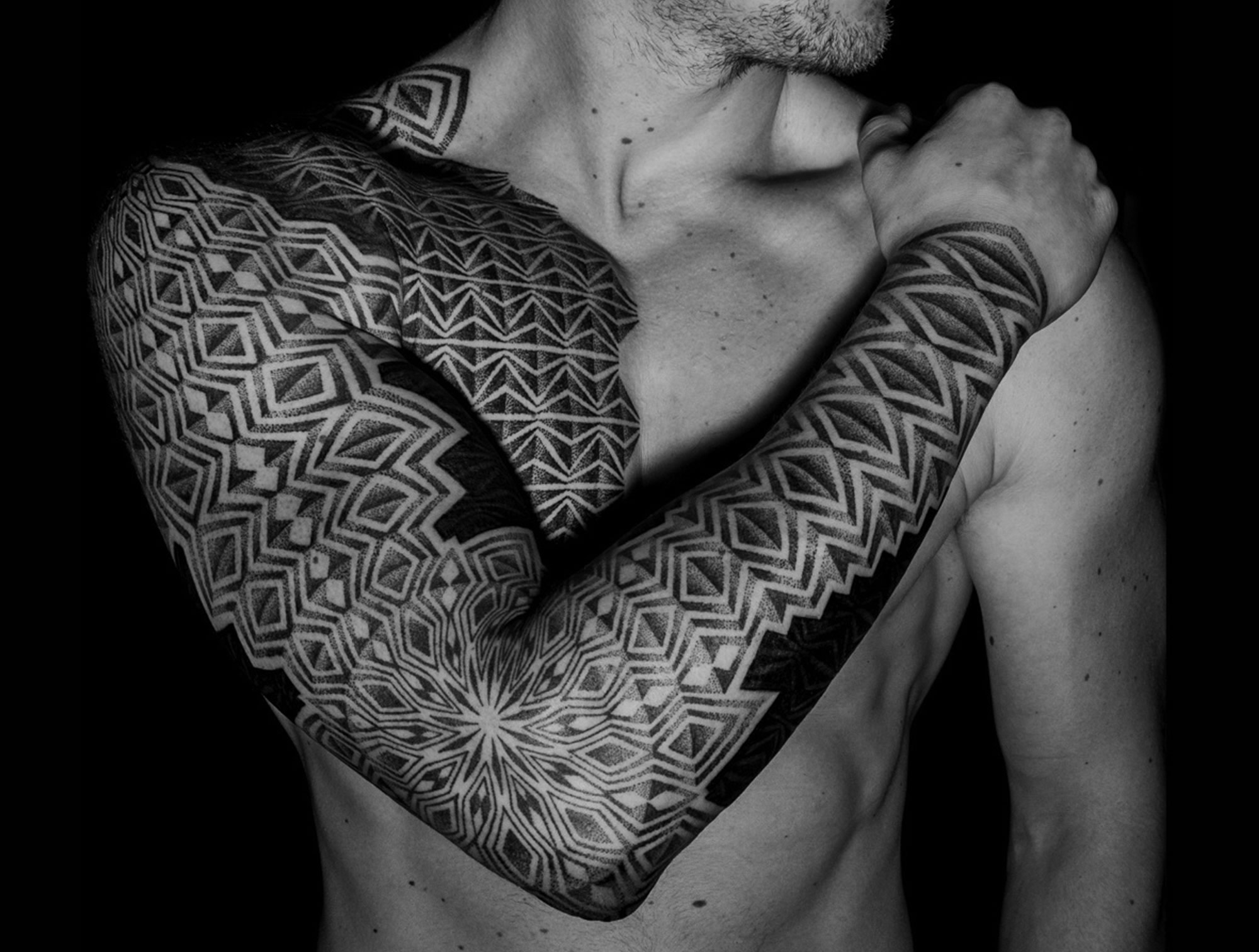 The dotwork style of tattooing has a rich history that goes well beyond contemporary culture and is deeply embedded in ancient societies.

Thereās evidence that the Egyptians used simple stippling to adorn blue faience figurines known as “Brides of the Dead.” The tattooed objects featured geometric patterns that ran in horizontal bands across the figure’s lower abdomen. These particular sculptures are always female, which suggests that tattooing was exclusively practiced by women.

Nowadays, theĀ dotwork styleĀ takes on many forms within the wide scope of tattooing. Artists use this meticulous process as a way to add a three-dimensionality to their work. They also employ it as a soft, subtle technique that showcases minute shifts in an animal’s fur or evokes a moody, smokey scenery. This is often in conjunction with line work, but don’t be fooledāthese dots make the tattooed subjects come alive. 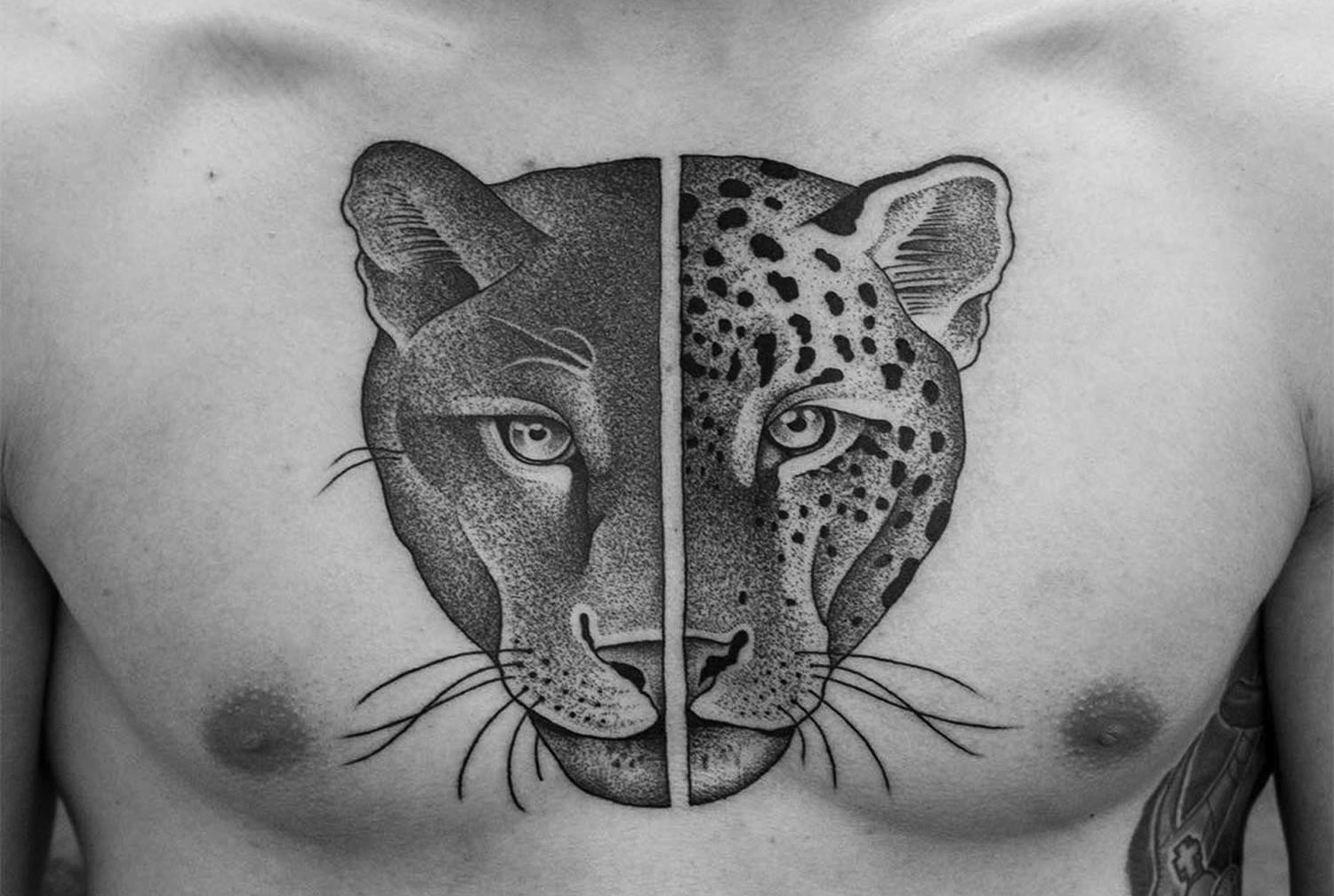 Dotwork forms the faces of two big cats about to face off.

Inspired by the natural world and engravings, Berlin-based tattoo artist Valentin HirschĀ centers his imagery around the idea of symmetry. A delineating line divides the two different cats, which exist in harmony on the skin. This design element permeates Hirsch’s other tattoos, and he creates flowing compositions where a separatingĀ line guides the eye between realistically-rendered subjects. In 2015, Hirsch compiled theseĀ stunning tattoos into his first book titled “Symmetries.” 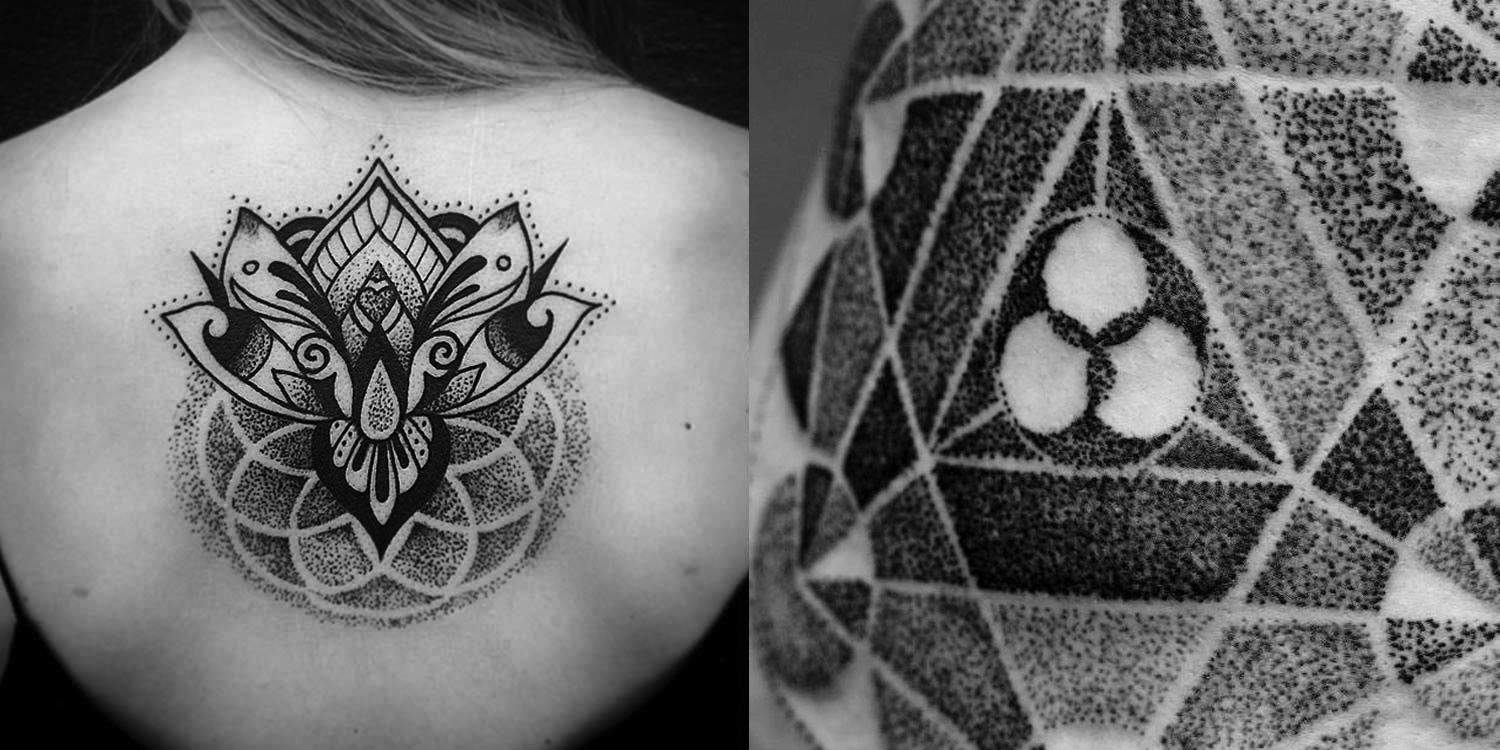 Growing up in Reno, Nevada, artist Canyon Webb was inspired by comic books and cartoons. This love of illustration encouraged him to try many different styles of tattooing until he ultimately settled on the timeless look of patterns and blackwork. Although traditional, Webb is always thinking about how to push the genre forward, he comments, āI am working on pioneering a style of geometric black opaque shapes that have a feeling of modern and primitive aesthetics.ā 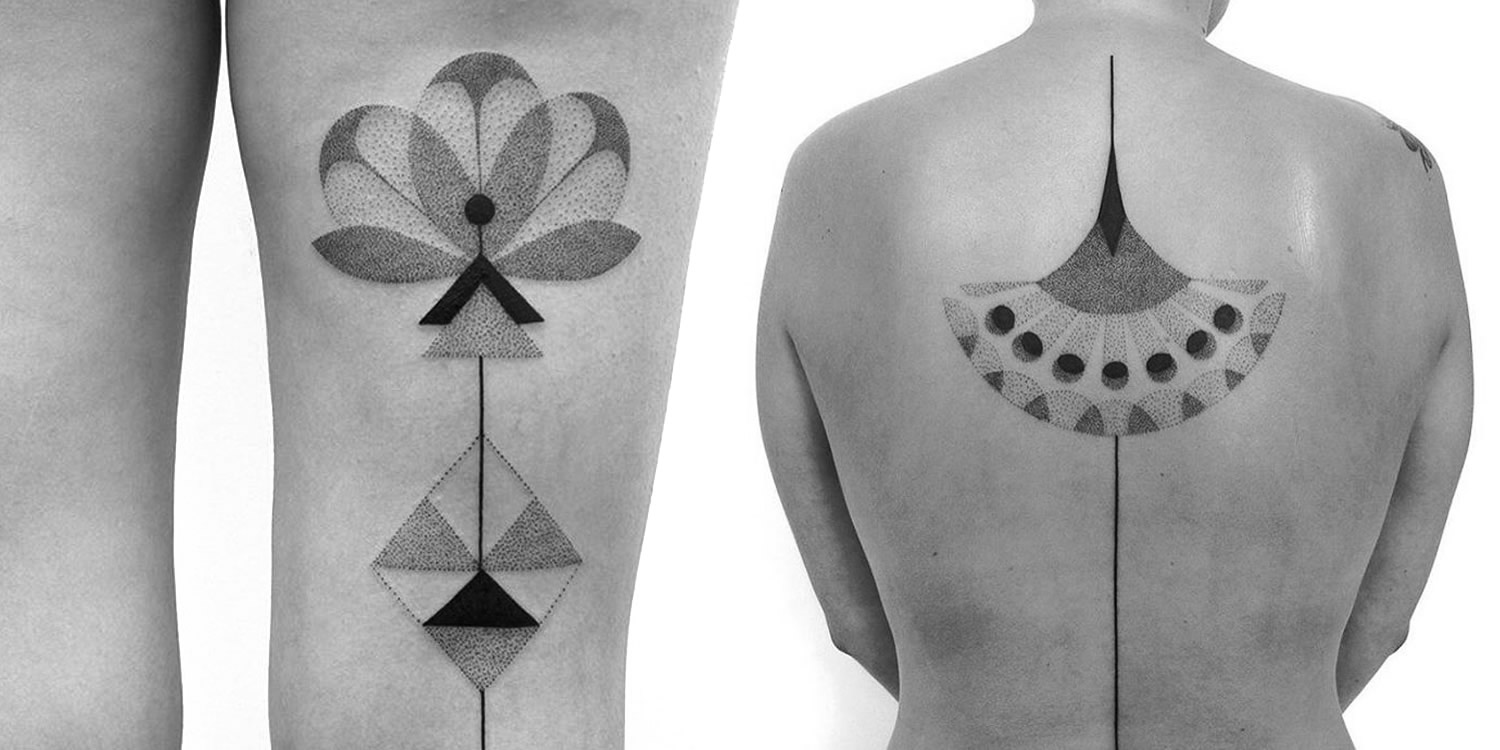 Dot-filled shapes take on the appearance of blooming flowers.

Axel Ejsmont creates abstract stippled tattoos that speak to the beauty of minimalist design. Here, the dots are meticulously arranged into geometric shapes that flow together and create a visual harmony. Bold, solid lines are used sparingly but have a strong presenceāthey ground the soft-looking designs so that they donāt feel as though theyāre floating away. 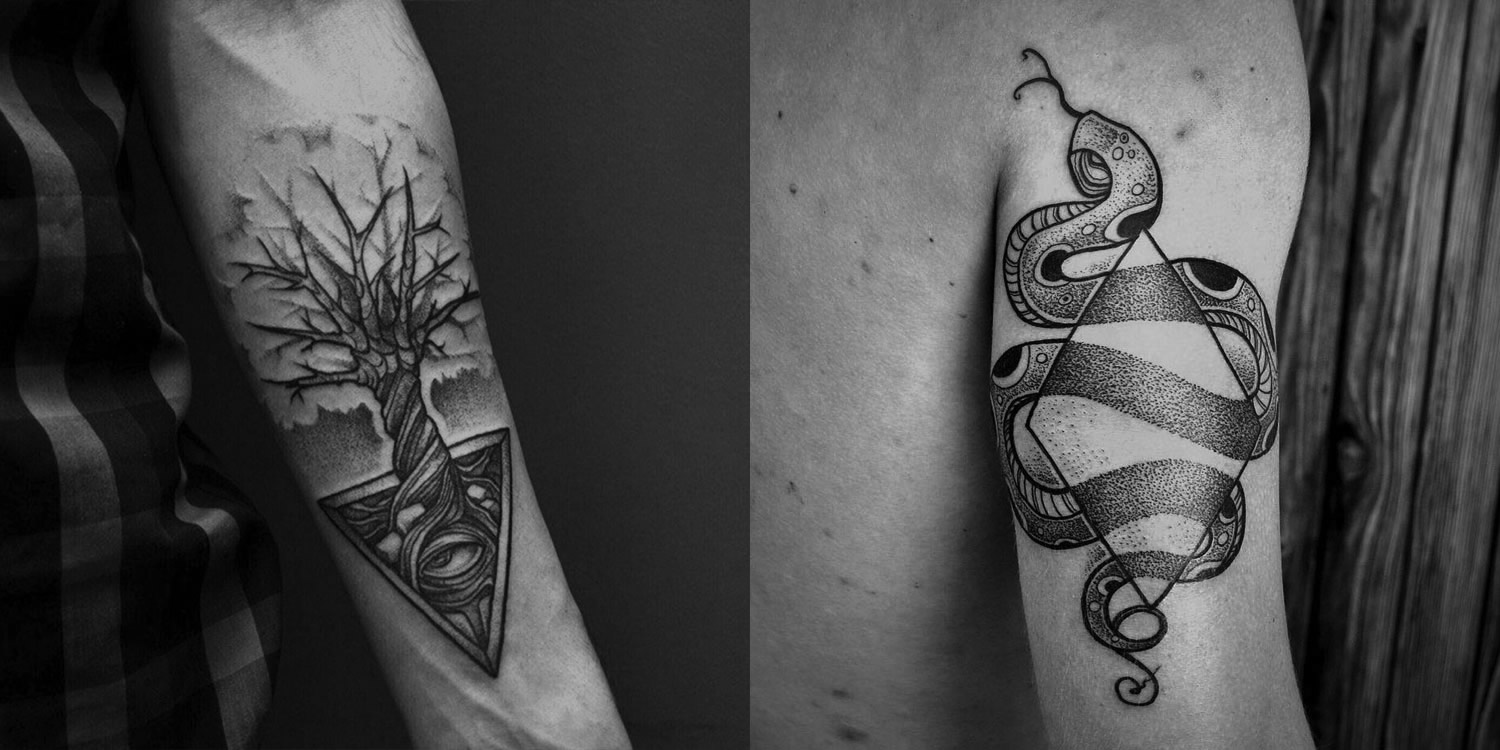 The lines define, but the stippling is what gives these pieces form, adding a dramatic effect.

Kiev-based tattoo artist Taras Shtanko uses stippling in a couple of distinct ways. One method places the dot in a decorative formation, creating patterns by alternating between heavy and light applications. Another technique has a more traditional form of stippling, which produces the illusion of three-dimensionality. 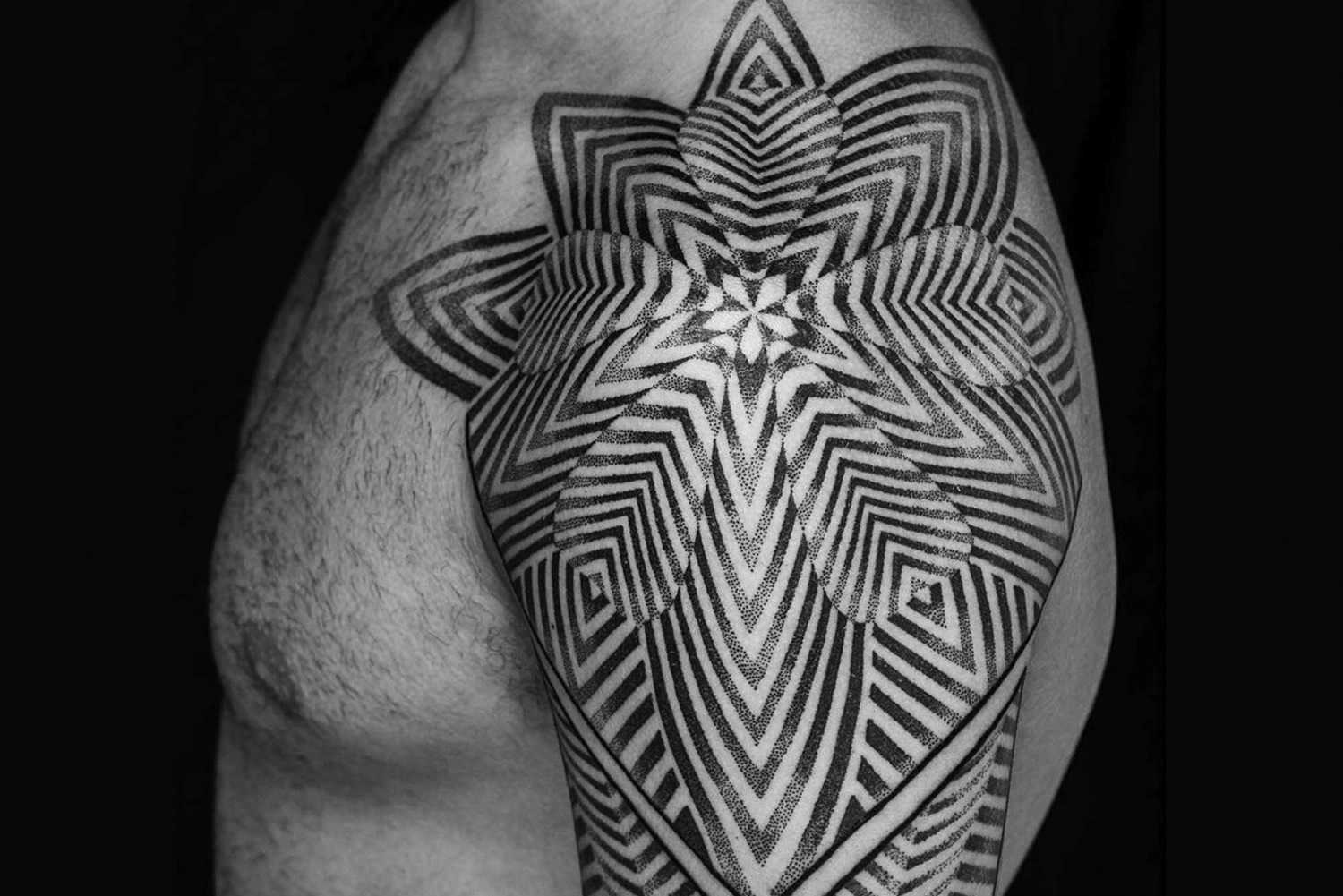 The radiating dots create a feeling of movement that’s rippling down the arm.

Lewisink has had an interest in tattooing ever since he was young. His mother dated a heavily tattooed blacksmith, and he was exposed to it as a form art. At the age of 14, he began to develop his signature geometric style, studying graphic design in college to gain a greater understanding of printing techniques and processes. To ensure precision in his tattoos, Lewisink first designs them on the computer and thenĀ translates them onto skin. The result areĀ spectacularly detailed tattoos that have optical illusions. When looking at them, itās easy to believe that they are in motion. 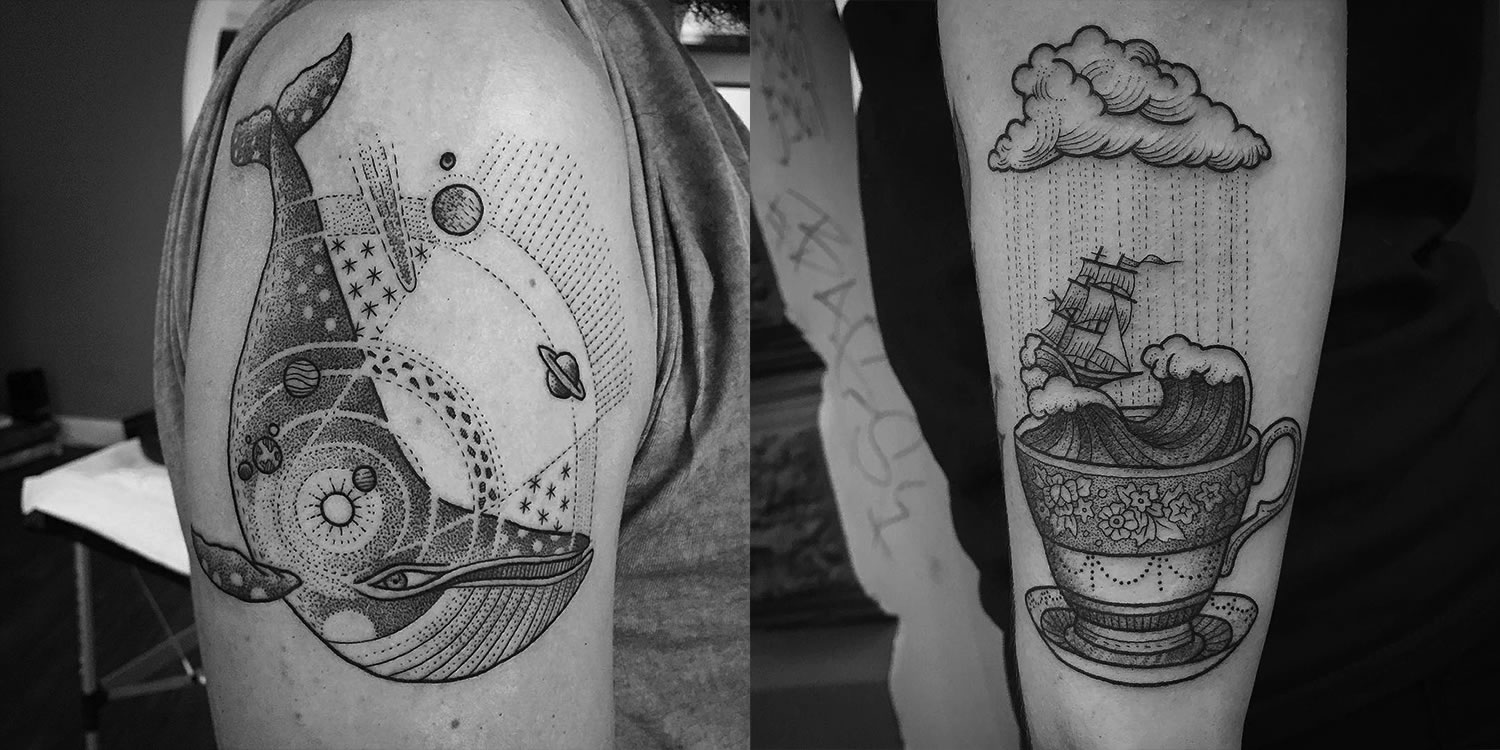 Hamburg-based artistĀ Susanne KĆ¶nigās works feature cute animal characters and whimsical scenes like theyāre out of a fable or fairy tale. Although they could seem too sweet, KĆ¶nigās tattoos have an edge to them because of her black stippling. Since her designs are without color, they haveĀ seriousness and a surrealistic quality thatās akin to a strange dream youād have as an adult. 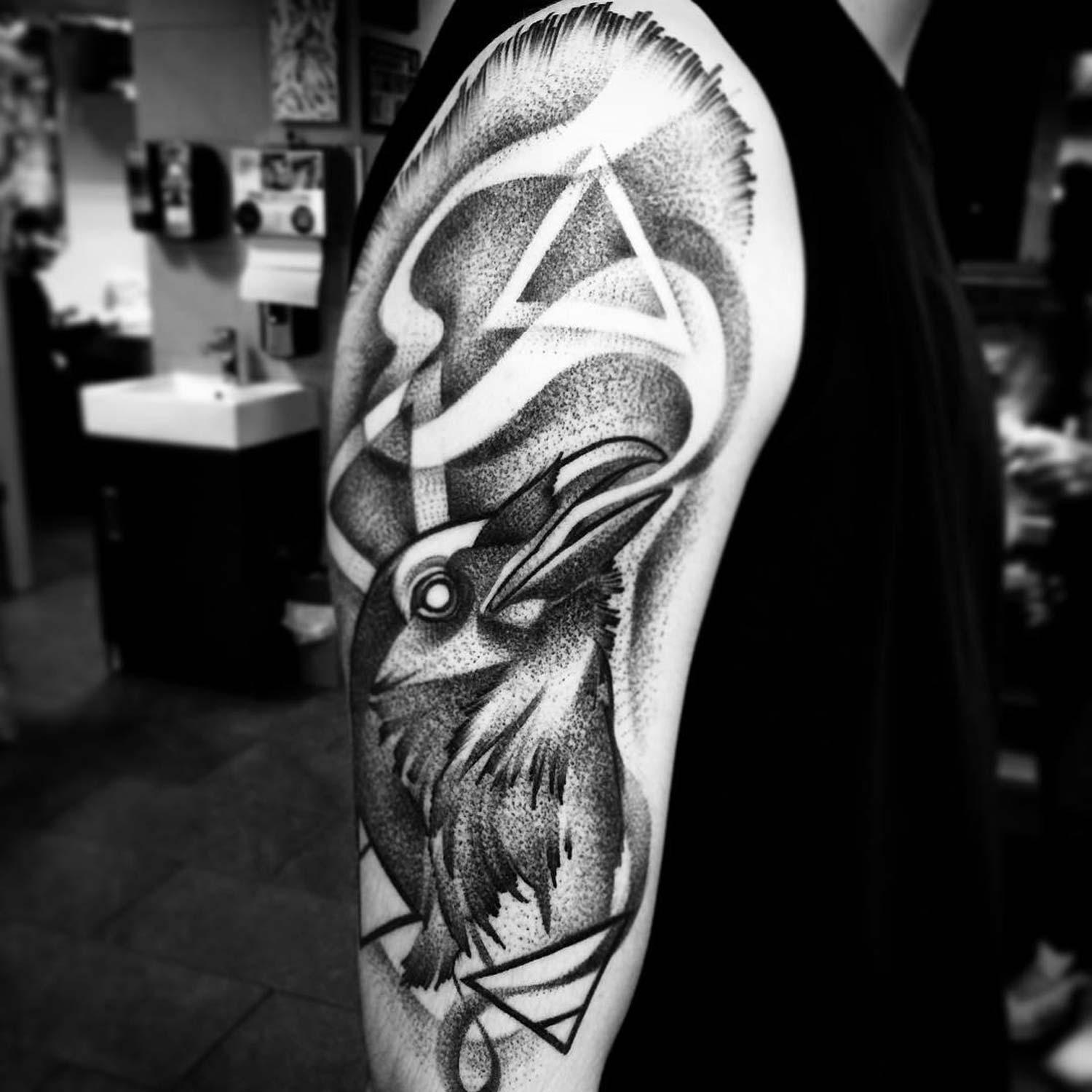 Growing up with a tattoo artist for a father, Julia Szewczykowska has been surrounded by the craft her entire life. Her work conveys this intensity, as her high-contrast pieces utilize deep black lines thatĀ are softened with the dotwork. These design choices have influence of the Polish School of Posters, where painterly effects are coupled with strong symbols. This piece, specifically, has the feel of a propaganda posterātheĀ crowĀ is heralded with his head held highĀ and a trail of wordless sounds leaves its mouth, urging us to take action, somehow. 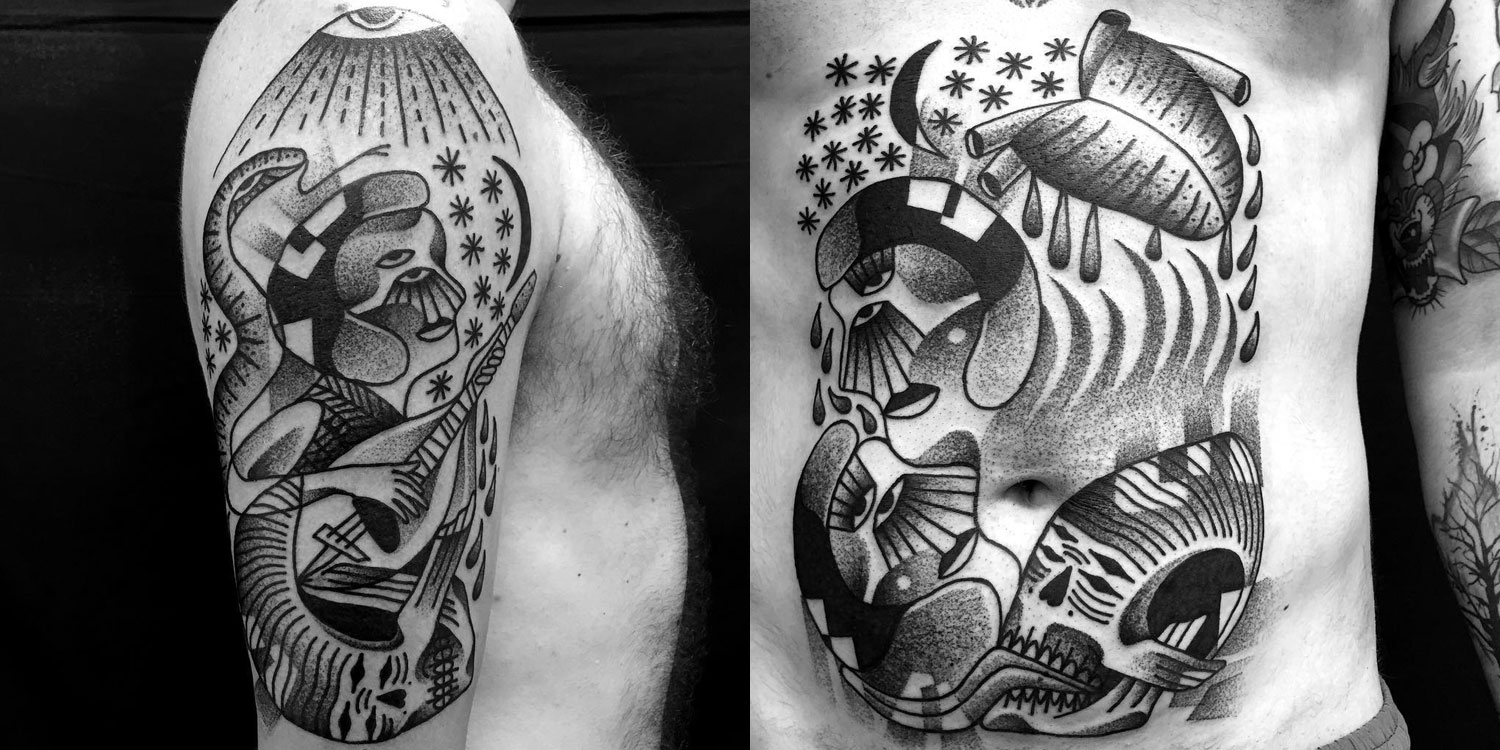 Cubism is translated into contemporary body art for a striking effect.

Influenced by the cubist aesthetic and early 20th century film, tattoo artist Jaya Suartika creates bizarre, abstract portraits that use dotwork as a pure design element. The stippling lives between Suartikaās bold lines, as a form of shading or decorative motif. It adds visual interest and breaks up the monotony of his solid marksāand his pieces are better off for it. 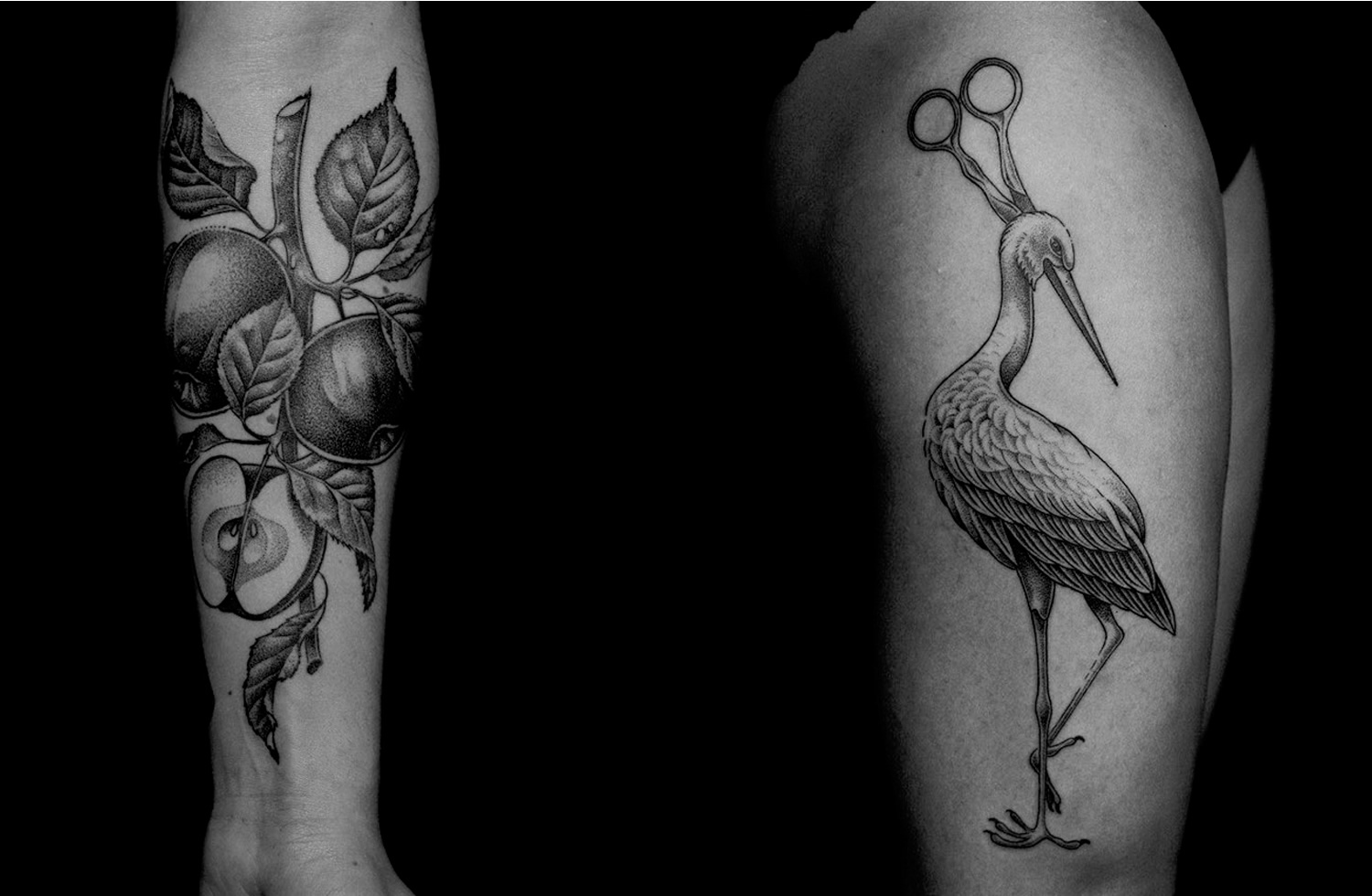 Brezinskiās is a perfectionist, his tattoos are exact replicas of his drawings on paper.

Saint Petersburg-based tattoo artist Ilya BrezinskiĀ draws naturalistic subjects with a twist. Always surprising the viewer with small forms of ingenuity, Brezinskiās work often has something amiss.Ā Here, a pair of sewing scissorsĀ doubles as a beak, while other tattoosĀ might have a subtleĀ glitch effect to them. They goĀ from existing in the realm of realism to a place thatās surreal. 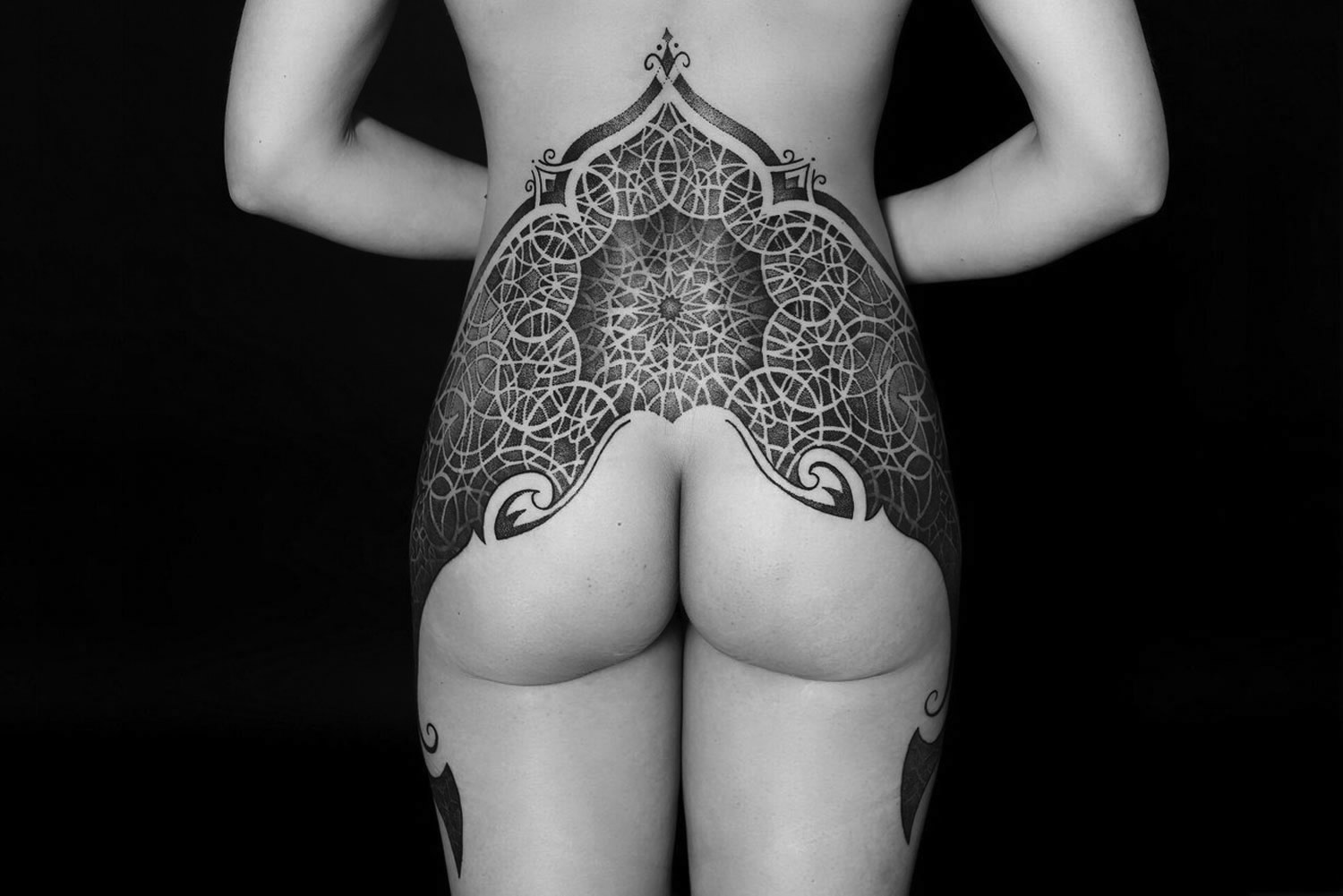 This mind-bending tattoo seems to open the entire body.

Russian tattoo artist Yaroslav Gorbunov creates mandala-inspired patterns with a three-dimensional twist. Here, dotwork gives his design depth, elevating it beyond a flat, ornamental shape and to produce the illusion of hollowed skin. Itās stippling at its best and arguably, most successful, showing the extent of the meticulous technique.