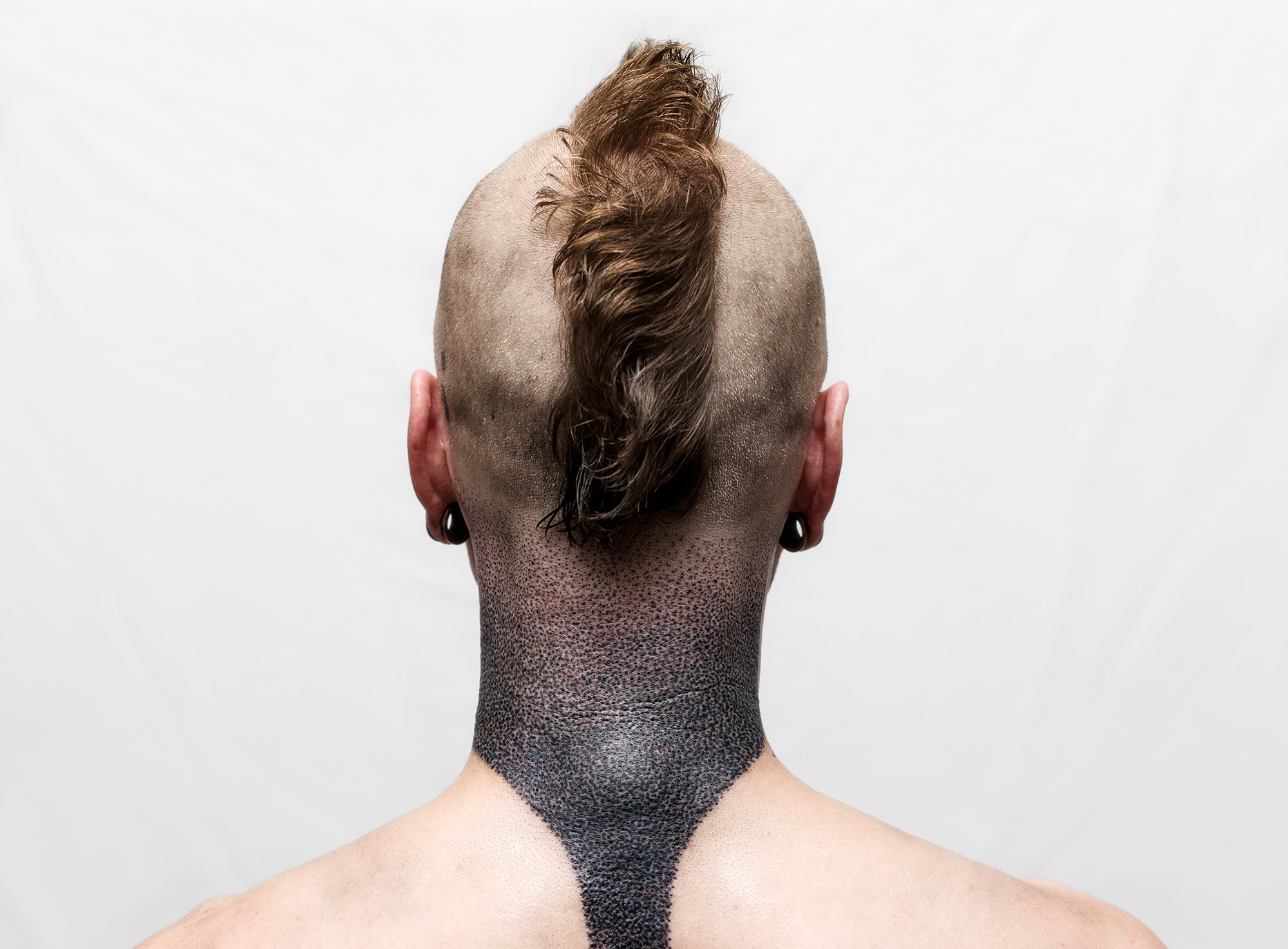 Previously working in a private art gallery in Prague, Mono (David Kejr) moved on to focus on his art-making and managing/touring withÂ  music bands for four years where he traveled and opened his horizons about life.

His real start in tattooing only happened in 2013, when he inked his friends (i.e. exploring styles and techniques) and simply enjoying tattooing like any other creative outlet. With time his passion for this medium grew and that led him to serious, elaborate projects. His current technique is marked by dots or lines, highly abstract and minimalist concepts that depict his artistic expression, life philosophy and the city where he chooses to live in: Berlin.

Above: Mono creates an intense gradient effect on his clientâ€™s neck. 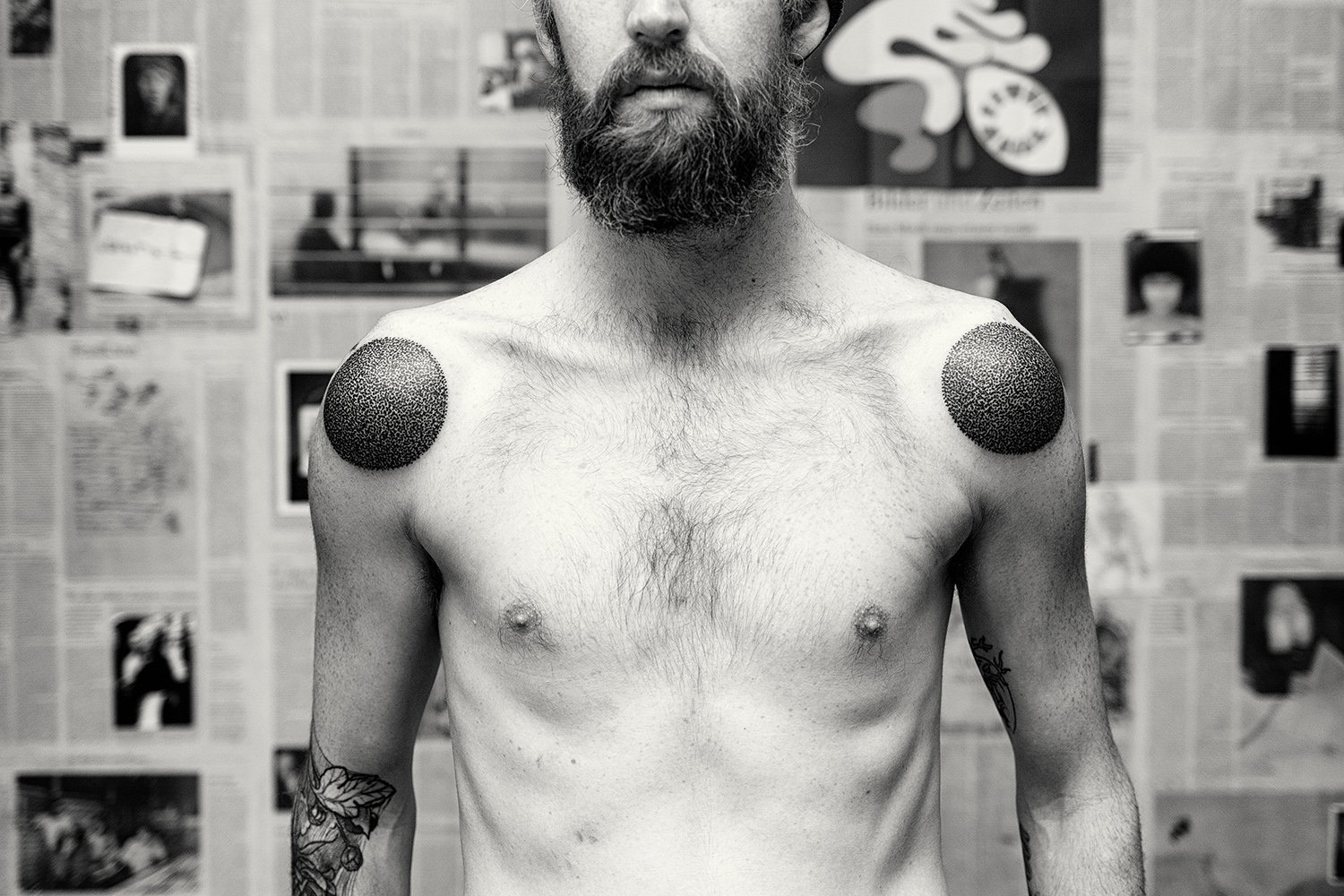 You are based in Berlin; does the city inspire your minimalist work?

Thatâ€™s a good question. My visual language has always been minimalistic and Berlin certainly fits into that aestheticâ€”but rather than Berlin being source of inspiration or influence I think itâ€™s a mutual inclusiveness that stands behind my visual expression.

Were you always a tattooer, or did you work in another field?

I come from arts background and used to work in private art gallery in Prague as assistant of director. I learned a lot about the business side of art and subsequently grew disillusioned and frustrated by that which resulted in me leaving and starting to travel and tour extensively. Up until recently for the past 6 years I was living kind of bi-modal life oscillating between creating art on one hand and touring with bands as freelance tour-manager on the other. Iâ€™m extremely thankful for that period of my life, it was inspiring intense and wild chapter of my lifeâ€”I got to see most of the western world and meet some pretty interesting people. That period is over, however, and Iâ€™m now fully concentrated on my art. 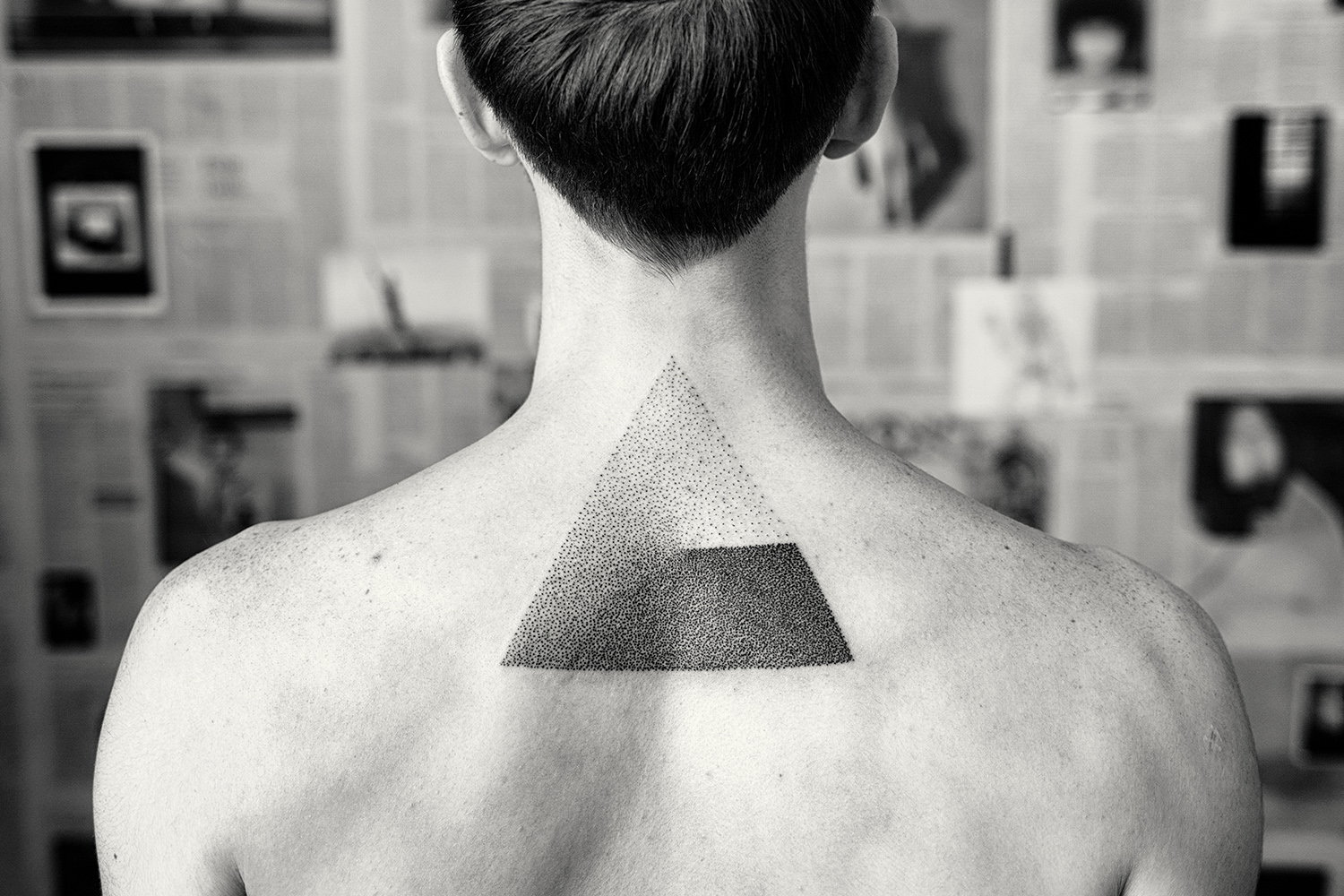 Explain a little bit about each tattoo youâ€™ve shared with us, here.

â€śIgnacio trapeziusâ€ť [shown above] is an adaptation of one of my drawings. I like using a triangle as a symbol, signifying a variety of trinities it tears down our simplistic view of the world in dualistic terms. My use of gradient in this piece symbolises ever progressing change and development.

â€śChris neckâ€ť [ref: cover photo] â€“ This piece comes from series of tattoos in which I was exploring dark heavily dotted patterns, often stretching over vast areas of skin. I wanted to create something bold and expressive for my client who comes from body-mod background. The dotted pattern blends in with his hair and gives majestic look to his sharp appearance – while it might appear rather heavy on first impression in reality the tattoo fells very natural and essentially decorative. 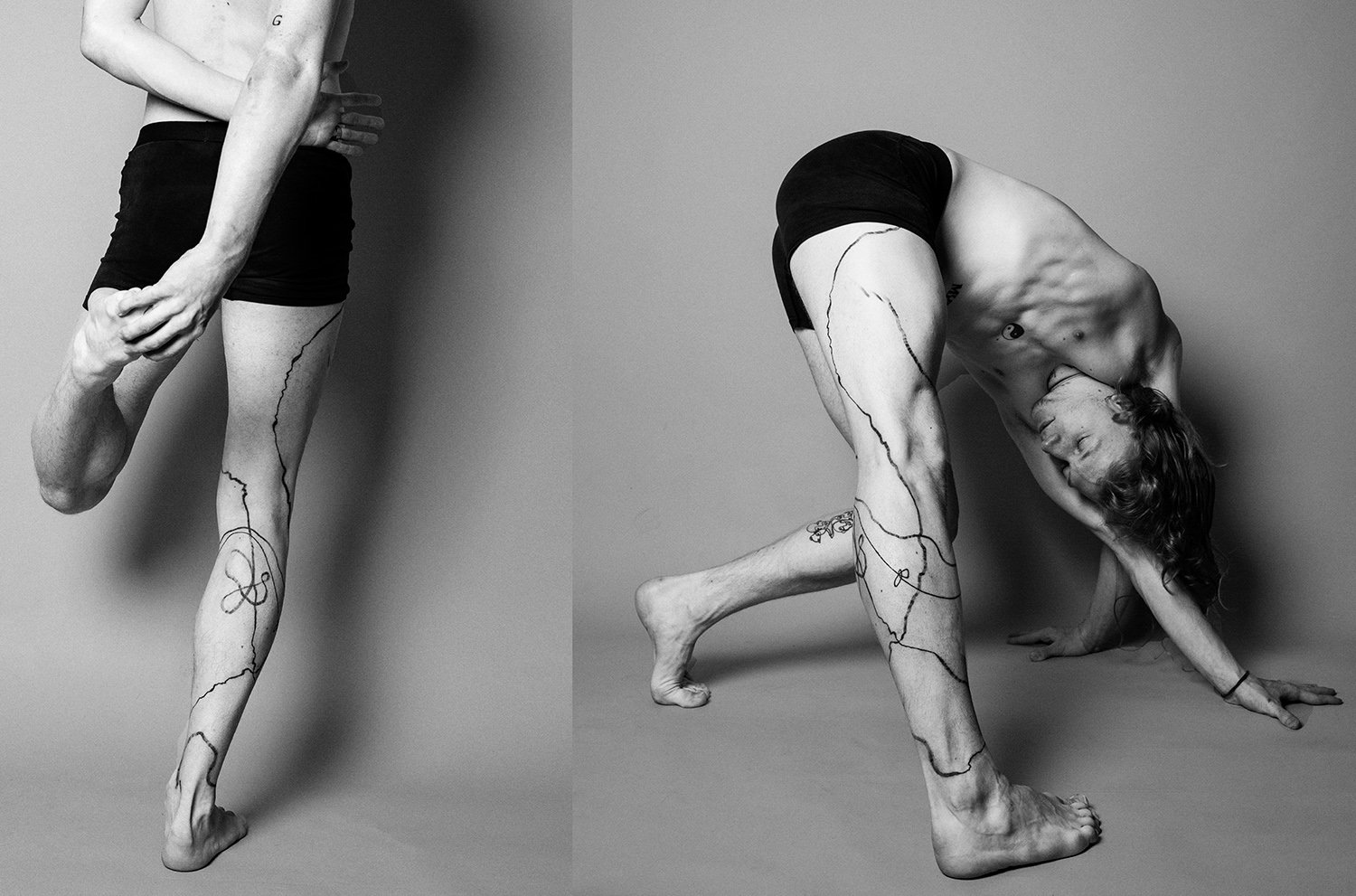 The movement and legs of a dancer. Photo by Louis Fernandez.

â€śLiamâ€™s legsâ€ť [above]â€”these tattoos are from series (of perhaps more organically looking works) through which I was exploring aesthetics of curves, lines and their dynamics. Liam is a dancer. An amazing one. When I saw his movements I knew instantly I wanted to express that kinetical energy. Dance is a beautiful form of art and Iâ€™m fascinated by it. You canâ€™t capture itâ€”the spirit of dance is in itâ€™s flowing movement â€”if you freeze it, itâ€™s not a dance anymore. Different energy and quality of lines in this work represents delightful dynamics of Liamâ€™s dance … flowing, charmingly unpredictable, playful, sometimes tense and other times loose. Dance. 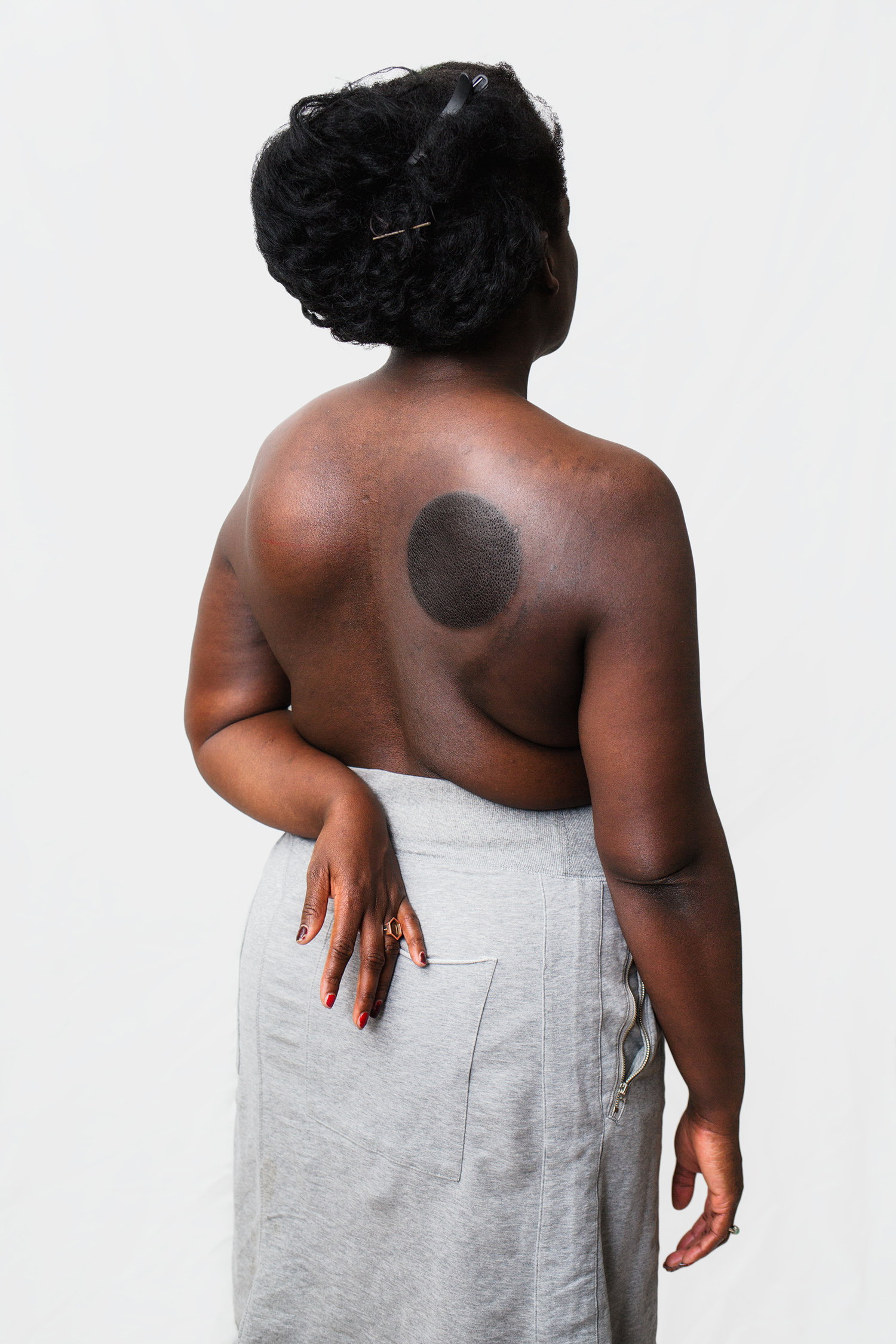 Photo of â€śInaâ€™s lipoma,â€ť a tattoo to match and flow on her clientâ€™s body.

â€śIna lipomaâ€ťâ€“The initial impulse for my work, my designs comes from my model, her personality, body shape, energy â€¦ I like to be inspired by differences in individual bodies and to use existing aesthetics of body to highlight or emphasize some parts I find interesting or aesthetic. Neither me nor my client knew what we were going to tattoo that day, my ideas are not premeditated and the piece usually comes into being right on place. When I saw Inaâ€™s perfectly shaped lipoma on the left side of her back I was inspired by that. What a beautiful bodily oddity! So I accompanied it with itâ€™s new shadow twin and brought symmetry to Inaâ€™s lovely figure. 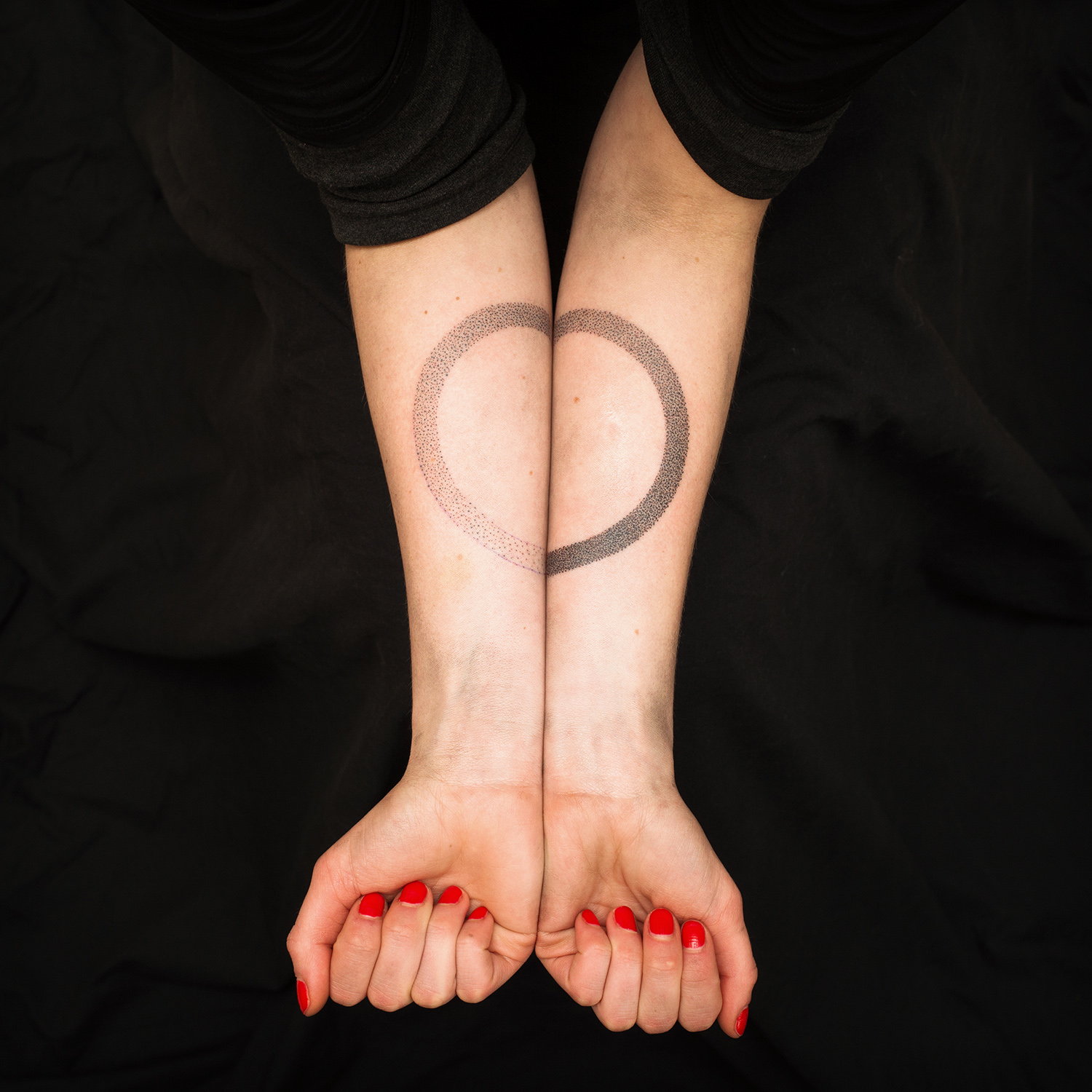 Titled â€śSophieâ€™s circleâ€ť is about the ending and beginning of oneâ€™s life.

â€śSophieâ€™s circleâ€ťâ€“Iâ€™d like to believe my visual language is simple and clear. When communicating ideas, I like to break them down to elemental level where shapes speak for themselves. This [circular] piece is highly symbolic. Everything comes together in circle, itâ€™s a symbol of completion and perfection. By using gradient I wanted to further highlight transformation and thus perfect the assignmentâ€”completion of oneâ€™s life cycle and beginning of another. 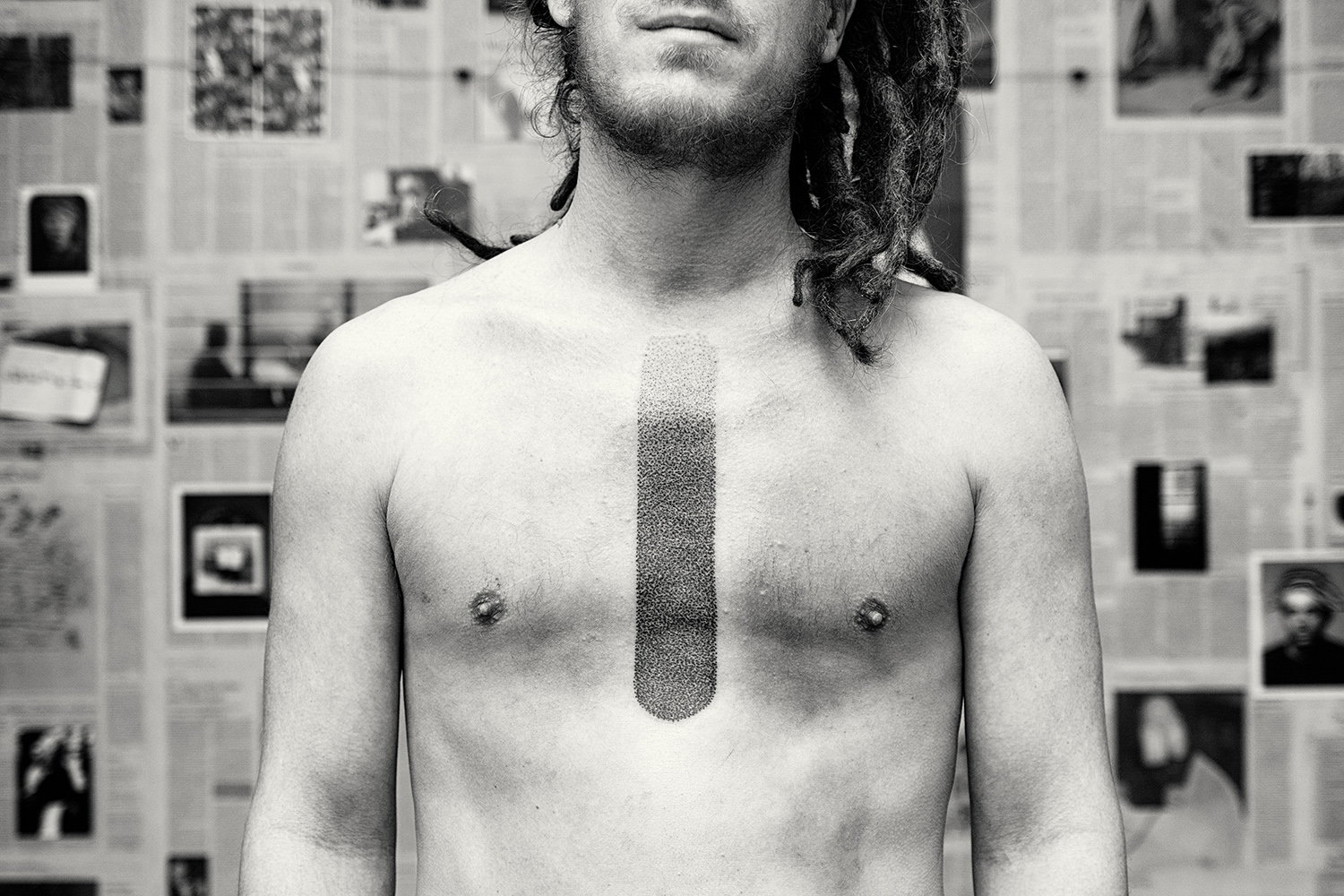 A tattoo design symbolizing a pillar, i.e. â€śtowering into heights, lost in clouds.â€ť

â€śUweâ€™s chest detailâ€ťâ€“with the idea that the body is a temple housing spiritual self; I wanted to create some strong grounding design, an element that would support the majestic structure (that human body is). I thought of Gothic cathedrals, rib vault ceilings and arches that support them and found stark resemblance between them and human collar bonesâ€”slender and elegant yet powerful enough to support the crushing weight of our physical being. 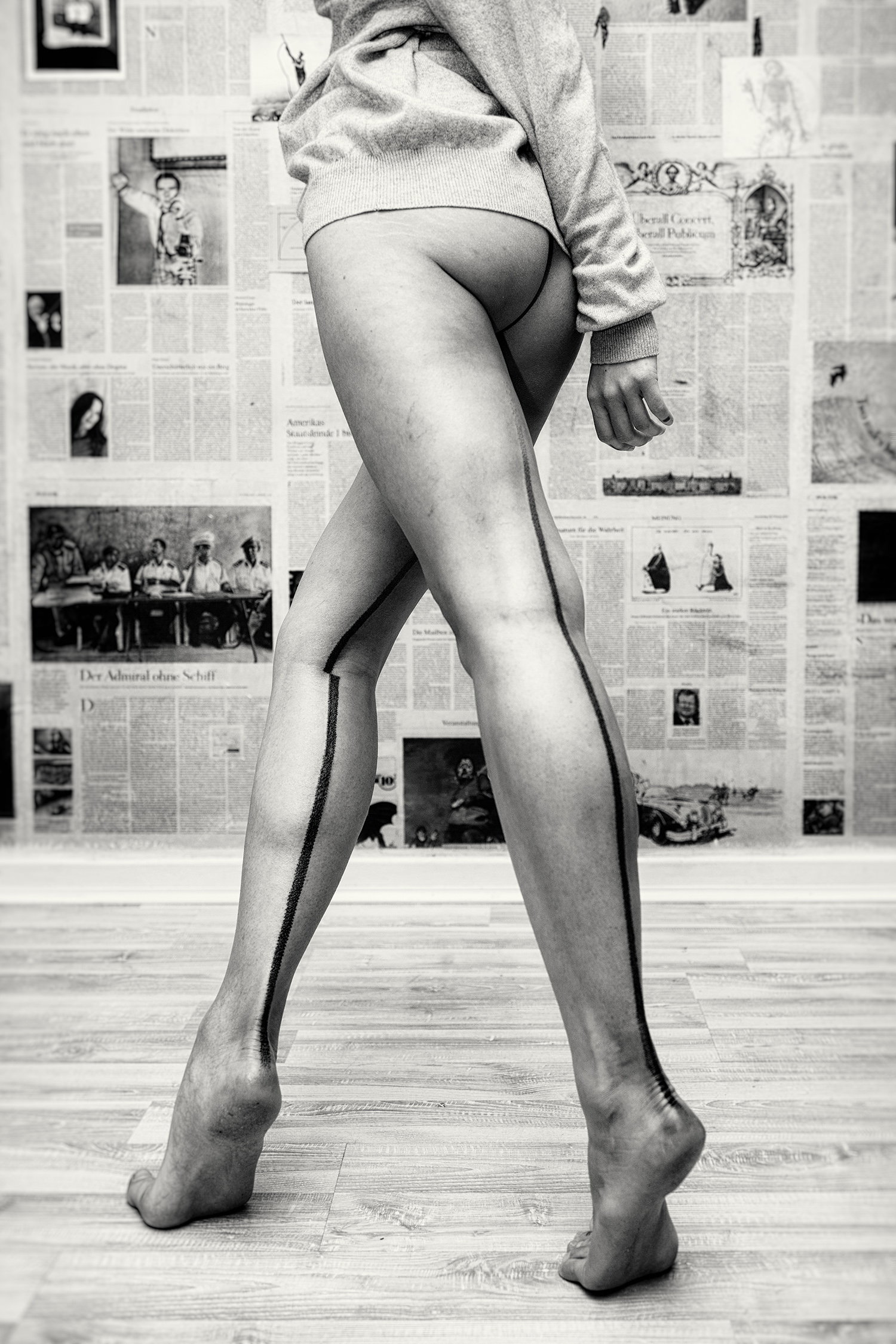 Florencia has long slender legs. While I was navigating through landscapes of my creative mind and thinking of a design that would fit her figure, and had her half-naked pacing around my studio, I saw reflection of her legs in a large mirror that hangs in my studio and that has cracks in it. The reflection was scattered and I saw the long line of her legs interrupted by these violent yet beautiful cracks that caused the image to be deformed and shuffled. I got inspired by that, hence the interruption in one of the lines on back of her legs. 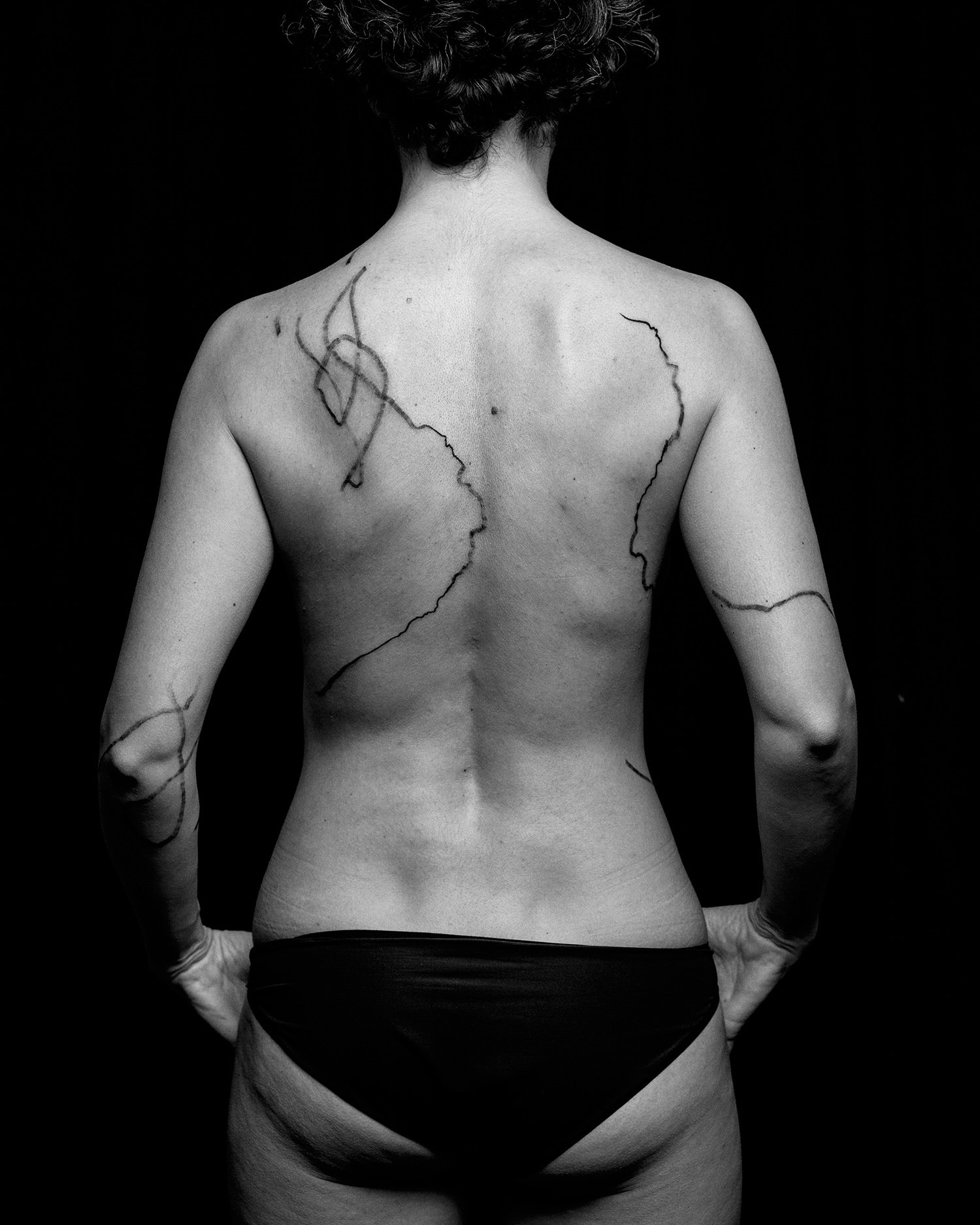 Your newest work has a more organic, dynamic flow. Tell us about your new direction and its connection with nature.

Itâ€™s true that my latest tattoo work feels more organic but shouldnâ€™t be viewed as departure from my previous approach. I became incrementally caught up by things I was not interested in previously but there is a line, path through which I arrived to where I am now and ultimately my individual projects have tendency to collide in some at least theoretical synthesis.
Pictures of nature (patterns, structures, gesturesâ€¦) through daily exposure to its manifestations imprint in my visual memory. Iâ€™m being pulled into that world by a swing of pendulum and constantly oscillate between ambivalent positions of metaphysical and material. This ambivalence is innate condition to all of us, our physical bodies and spiritual selves connect and create synergistically union we like to think is â€śself.â€ť I attempt to catch motion of this pendulum in the middle, in the perfect center between the two principles, not by interrupting itâ€™s movement and stopping it all together but by capturing it in a way camera â€śfreezesâ€ť time by recording the visible light reflected from the objects in the cameraâ€™s field of view for the very short time the shutter is open. In this sense Nature as material world has always been part of my creative process. My interest lies in penumbra of our world and its ambiguity in-between monochromatic world of black and white, material and metaphysicalâ€¦
But to answer your question in more concrete tone: Physical representations of nature are beautiful on themselves and Iâ€™d say itâ€™s often more difficult to resist the urge of portraying obvious beauty of nature than doing so. That said Iâ€™m generally more interested in representation of abstract concepts coming from philosophy or social science. Psychology is definitely great source of inspiration as well, and recently I became interested in employing transcendental mediation as a creative tool.