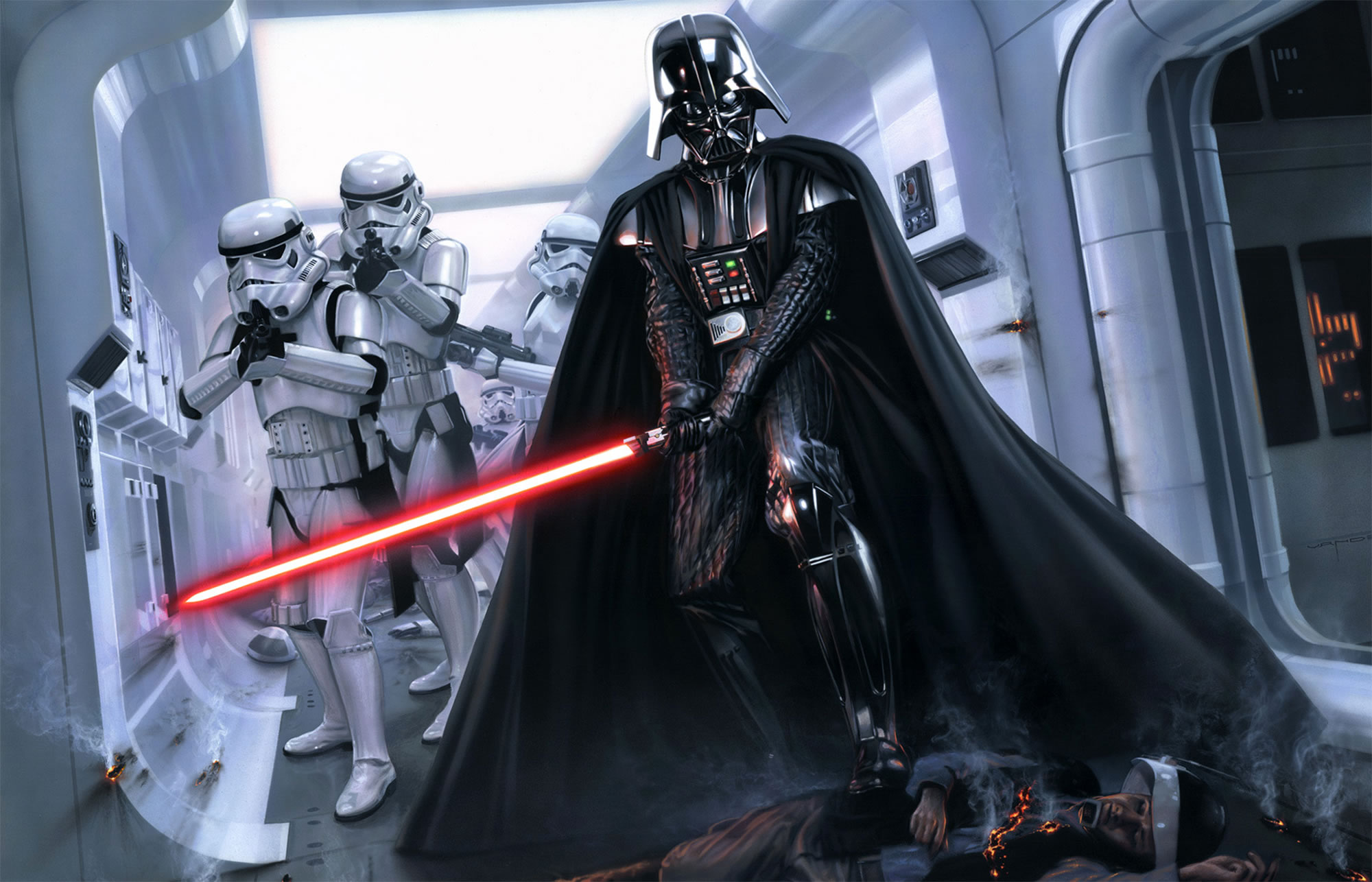 A lot has happened in the ten years since George Lucas wrapped up his ‚ÄúStar Wars‚Äù mythology with the prequels depicting Anakin Skywalker‚Äôs journey to the dark side of the Force.

He sold the series to Disney and the company hired JJ Abrams to relaunch it with a direct sequel to the original beloved trilogy. Fan expectation for ‚ÄúStar Wars: The Force Awakens‚Äù is intense. Most of all because original trilogy stars Harrison Ford, Mark Hamill and Carrie Fisher are involved.

The movies‚Äîyes, even the prequels‚Äîhave their fair share of iconic moments. I selected ten of the very best.

Top: “Star Wars” is the most popular movie saga of all time. 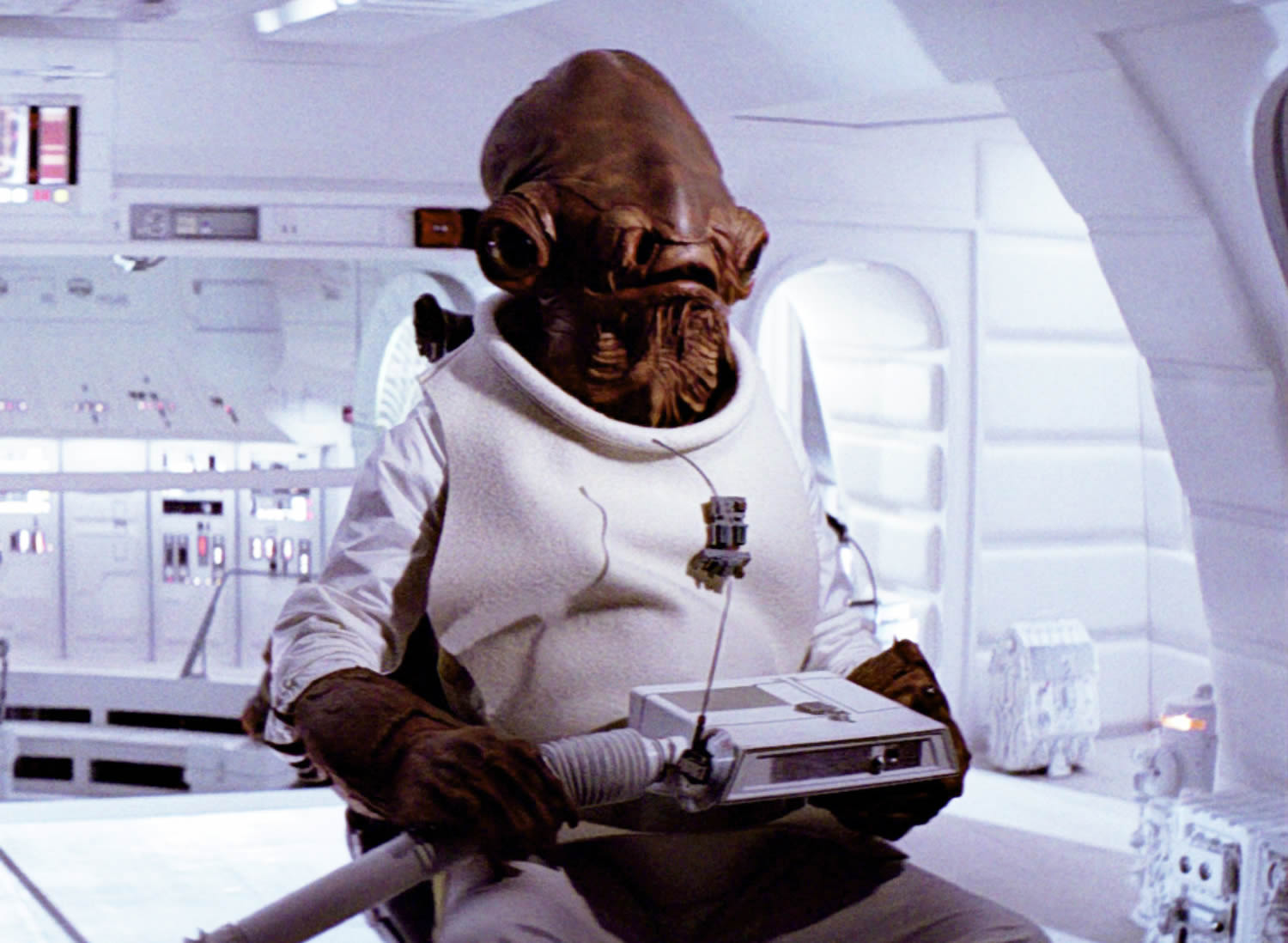 Admiral Ackbar was portrayed by actor Tim Rose and was voiced by Erik Bauersfeld.

Admiral Ackbar is a cult figure. This status largely derives from a single line uttered in the third act of ‚ÄúReturn of the Jedi,‚Äù as the rebels attempt to destroy the Death Star II. Noting the deflector shields are still operational on the star-destroying space station, and the rebels have been lured into a cunning deception, Ackbar swings around in his swivel chair and declares, ‚ÄúIt‚Äôs a trap!‚Äù 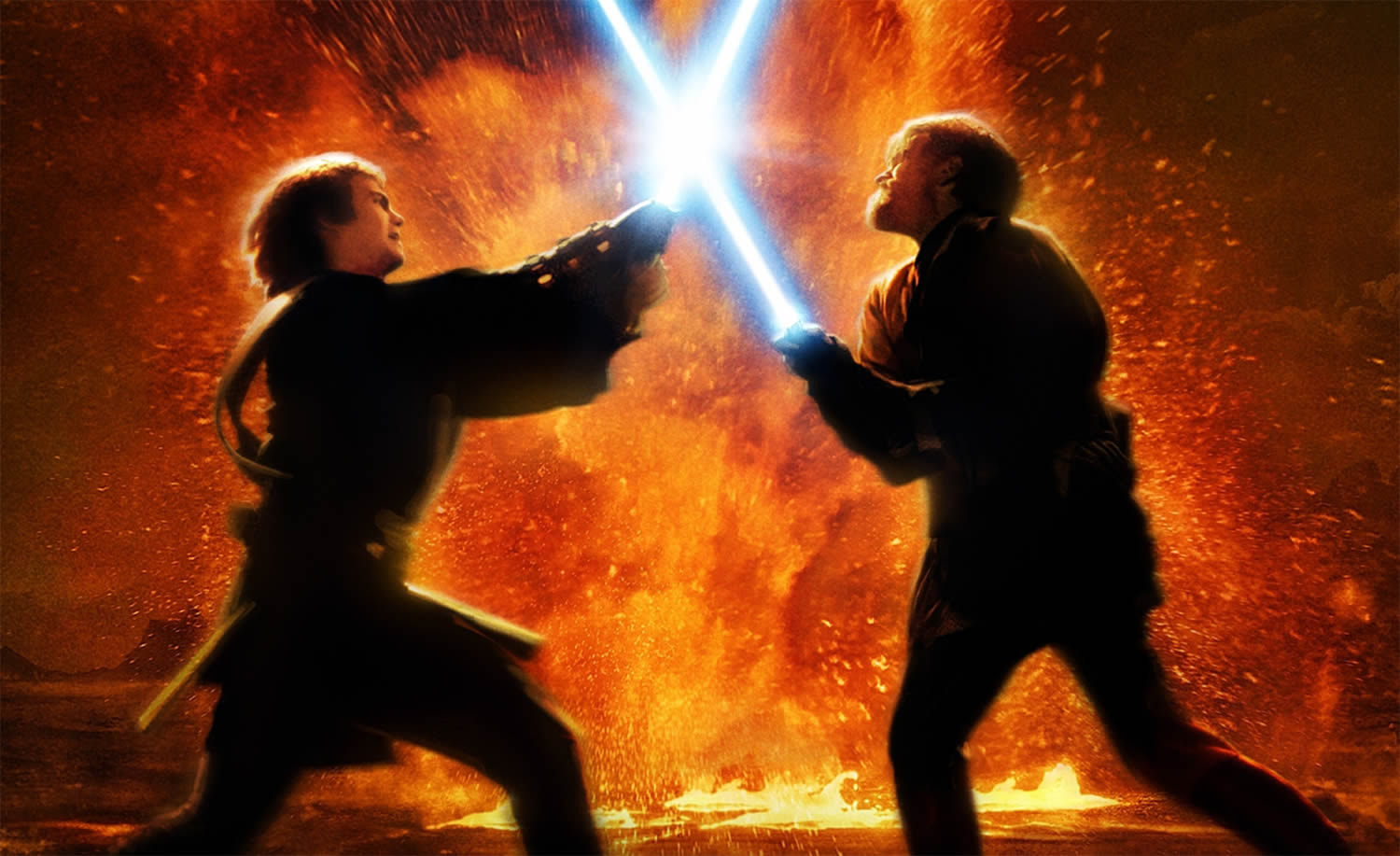 Anakin’s defeat on the volcano planet led to him becoming Darth Vader.

It‚Äôs the scene we had longed to see: Anakin Skywalker versus Obi-Wan Kenobi on the volcano planet, Mustafar. The prequels are largely terrible, but they do have their moments. Anakin has been lost to the dark side of the Force and his old friend and mentor, Obi-Wan, has to take him out. It’s all tragedy and tears, but it leads to the original trilogy (which we all know and love). Their confrontation is spectacular. 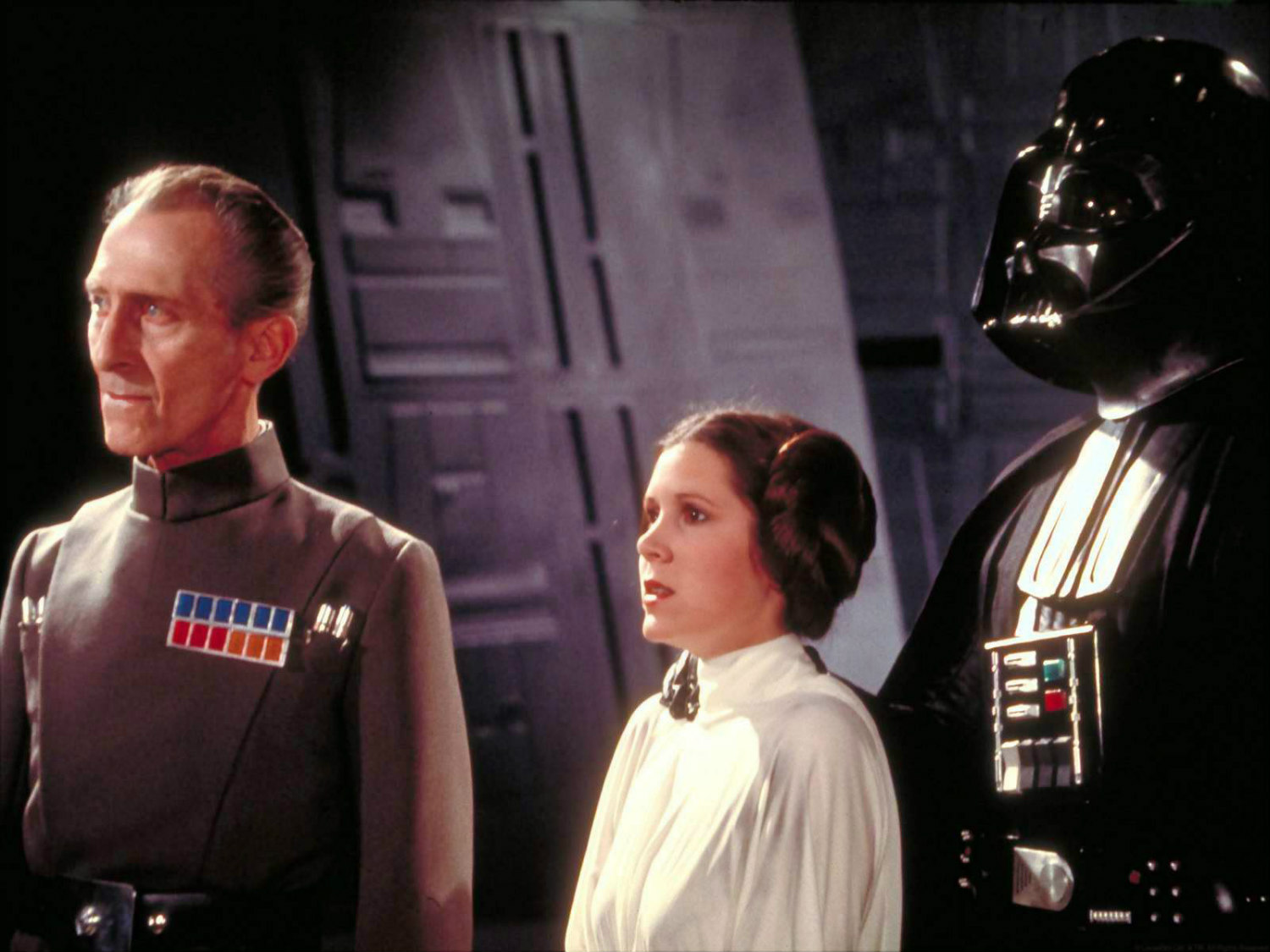 The Destruction of Alderaan

Grand Moff Tarkin (Peter Cushing) cruelly orders the Death Star control room to destroy Princess Leia‚Äôs home planet, Alderaan. Trying to extract vital info from the captured princess (he wants the location of the rebel alliance base) was always going to be too much hard work. But even if she sang like a canary, Tarkin was always going to blow Alderaan out of existence. It’s a great scene and a pretty chilling moment.

The stunning opening shot of “Star Wars” wowed audiences back in 1977.

We are among the stars. The camera tilts down to reveal two moons above the desert planet of Tatooine. John Williams‚Äôs magnificent score strikes up with Wagnerian bombast. Lasers fire upon on a small, speeding spacecraft. Suddenly another spaceship appears from screen right, hot on its tail. The spaceship is absolutely gigantic! It surely counts as one of the most thrilling introductions to a cinematic universe ever made. It throws us straight into the action and storytelling. 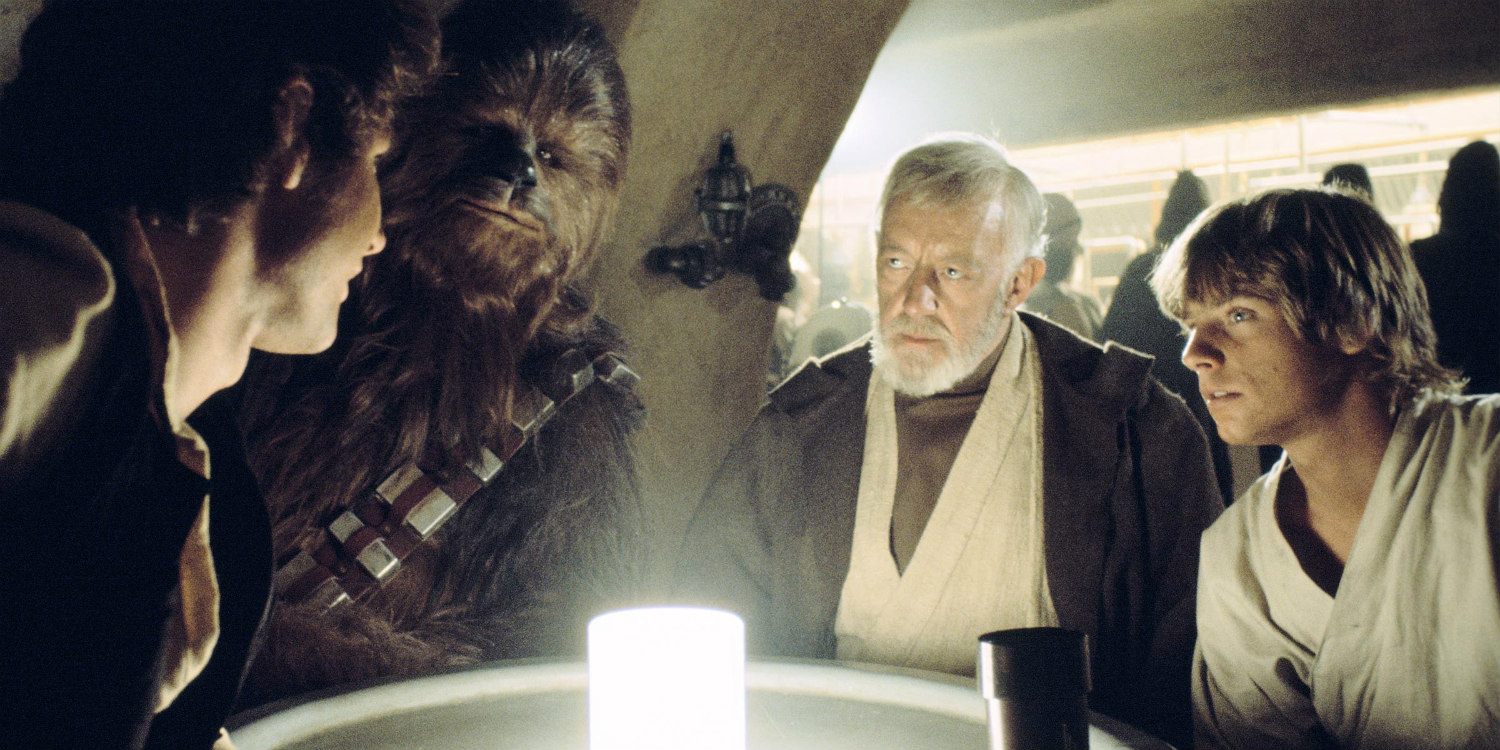 Three locations in Tunisia, London and LA were cut together to create the illusion of the cantina.

There is so much awesomeness in the Cantina sequence, where to even begin? What about Obi-Wan lopping off the arm of that walrus-looking mofo, after his pig-nosed homie was getting up in Luke‚Äôs grill? What about all the crazy creatures and the house band playing their famous space jazz number? It‚Äôs also the scene which introduces Han Solo, arguably the coolest movie character of all time. 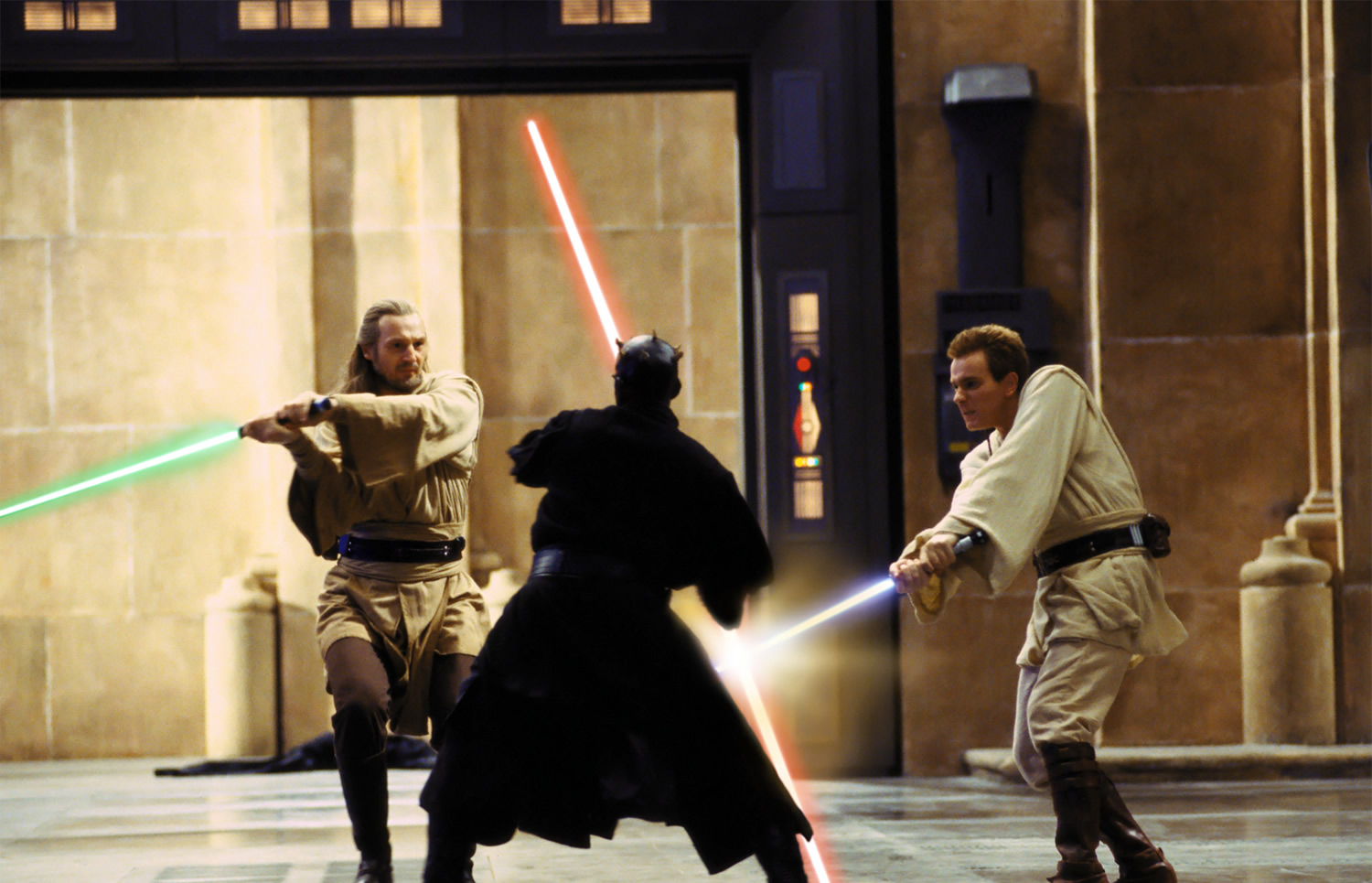 Duel Of The Fates

‚ÄúThe Phantom Menace‚Äù is all kinds of terrible. Jar Jar Binks is the devil and George Lucas nearly wrecked his mythology with too much silliness and boring dialogue about trade federations and galactic politics. But ‚ÄúThe Phantom Menace‚Äù does actually feature the best ‚ÄúStar Wars‚Äù fight scene: Qui-Gon Jinn and Obi-Wan facing off against Sith baddie, Darth Maul and his gnarly double-bladed lightsaber, in the palace of Queen Amidala. John Williams‚Äô “Duel of the Fates” composition is positively electrifying. 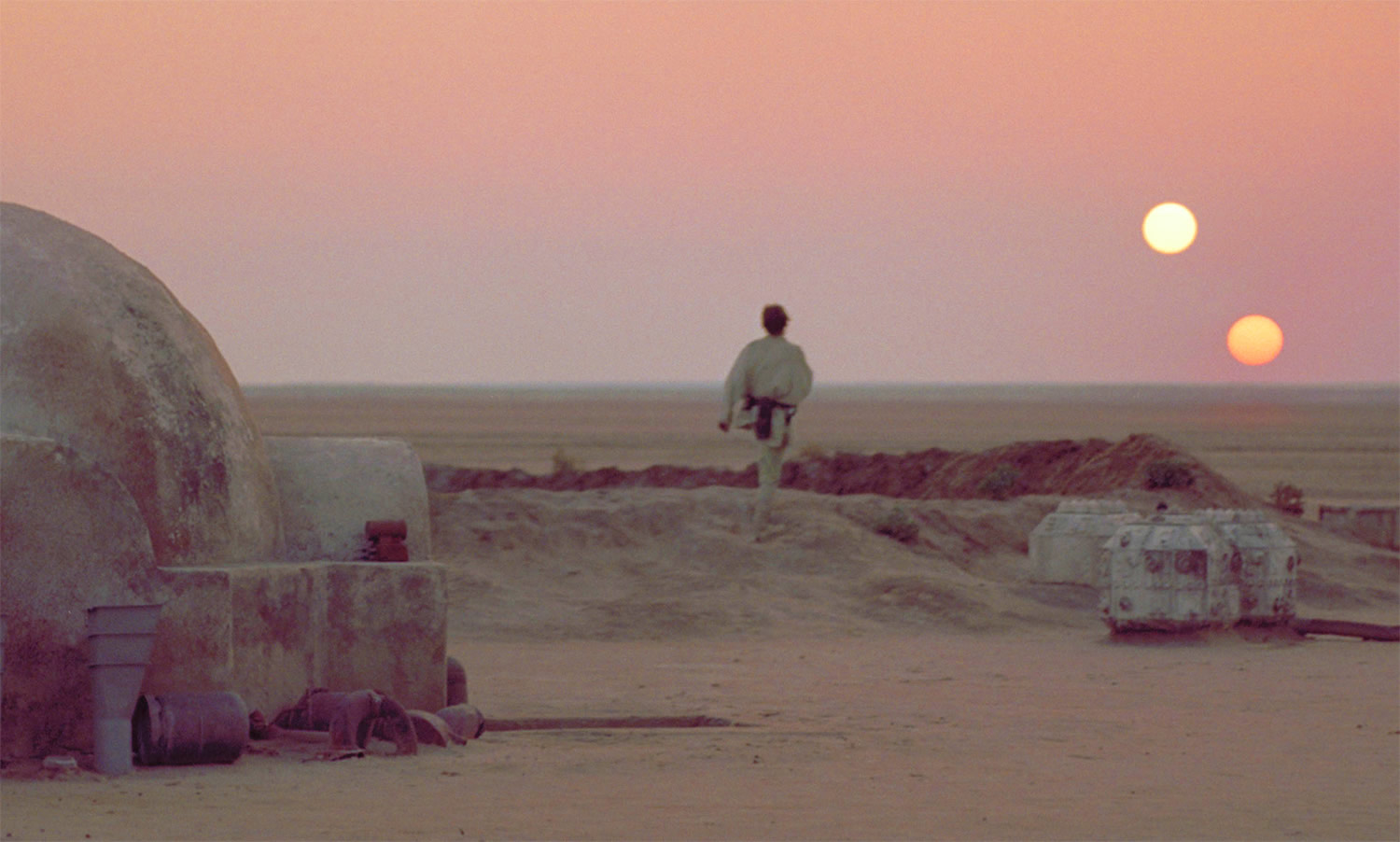 Luke on the farm at sunset

It‚Äôs a short scene, but also one of the most iconic. Luke Skywalker is on the cusp of life-changing events. He‚Äôs bored as hell stuck at home on the farm. The suns are setting over Tatooine and young Luke stares wistfully out into the distance. The composition and framing is worthy of John Ford. 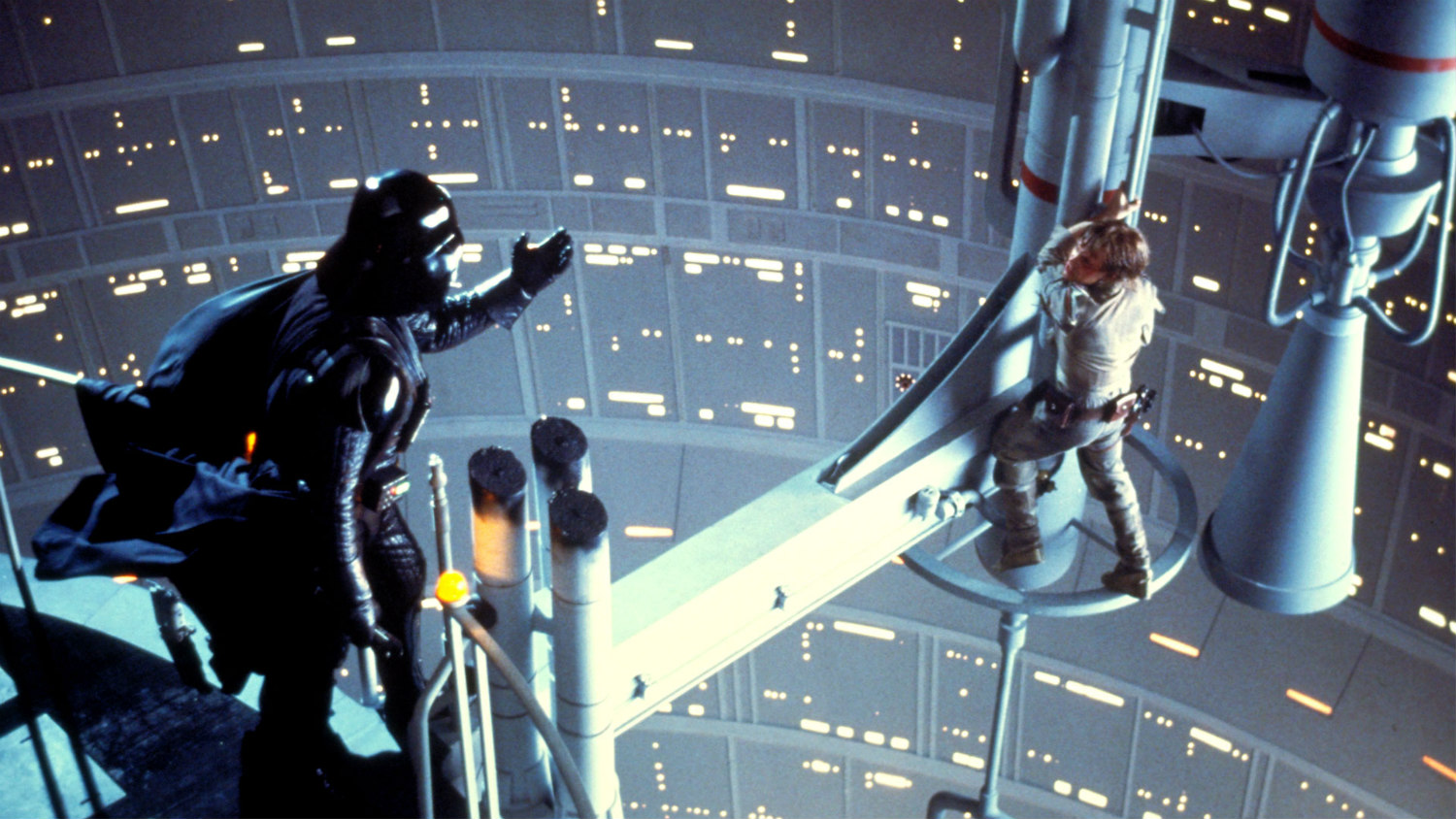 It was during a script rewrite, that George Lucas hit upon the idea of Darth Vader being Luke’s father.

It was the best kept secret in movie history and one that made audiences back in the day choke on their popcorn. Darth Vader‚Äôs revelation‚Äî‚ÄúNo, I am your father‚Äù‚Äîwas so top secret, not even Mark Hamill knew about it until they filmed Luke‚Äôs reaction shot to the shattering news. To stop the crew from leaking the info, the actor playing Darth Vader (David Prowse) said “Obi-Wan killed your father” and the actual line was dubbed in later during post-production. 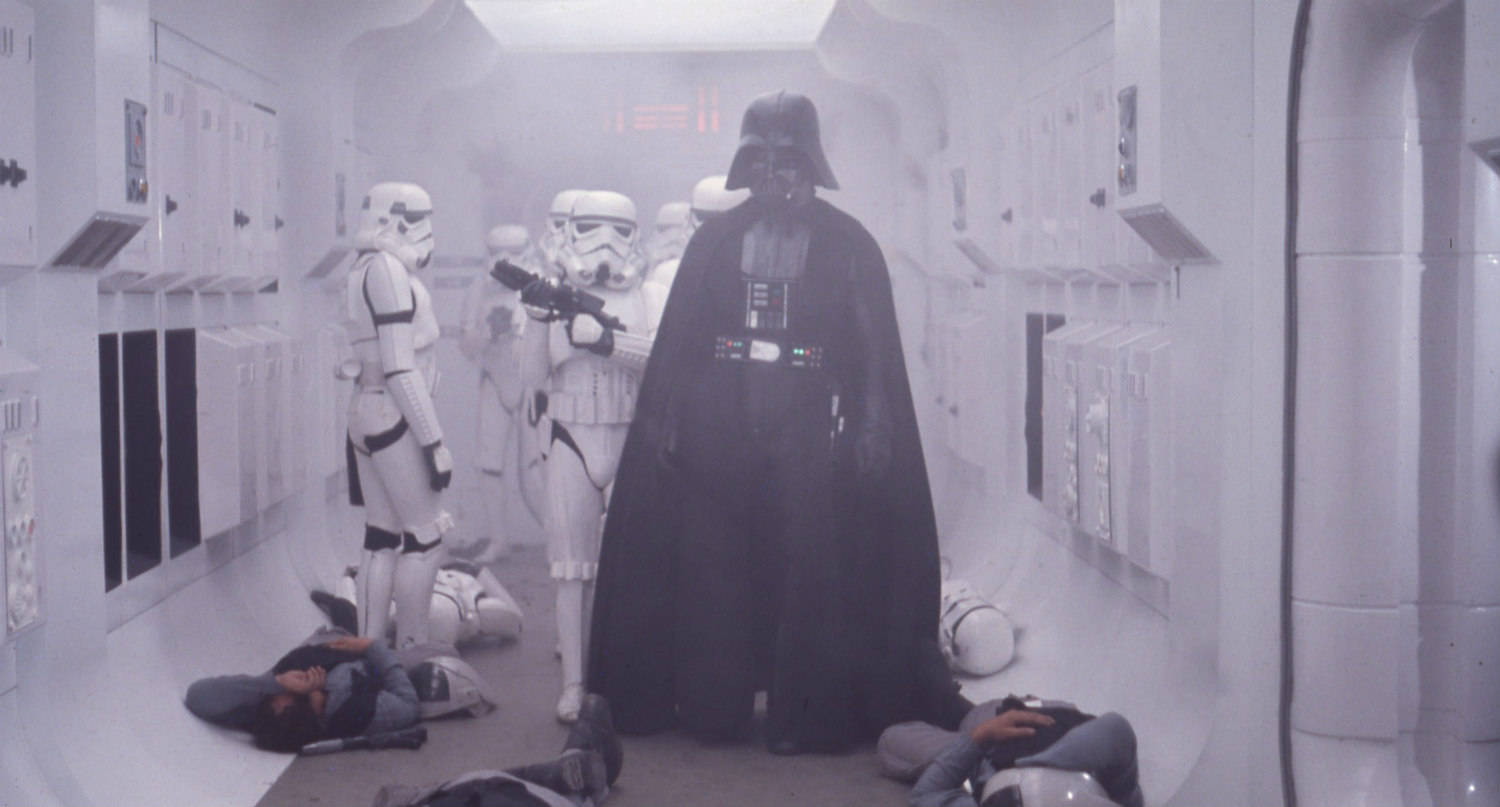 The rebel ship carrying Princess Leia is under attack from a Star Destroyer. The ship is captured by the Empire and boarded. The rebels wait in a corridor, weapons at the ready. Ominous noises are heard then the door blasts wide open and Stormtroopers appear all laser guns blasting. As the corridor fills with smoke, in steps imperious Darth Vader: a seven foot tall baddie clad in black armour with a cool robot voice. It‚Äôs an iconic entrance for the grandest screen villain of them all. 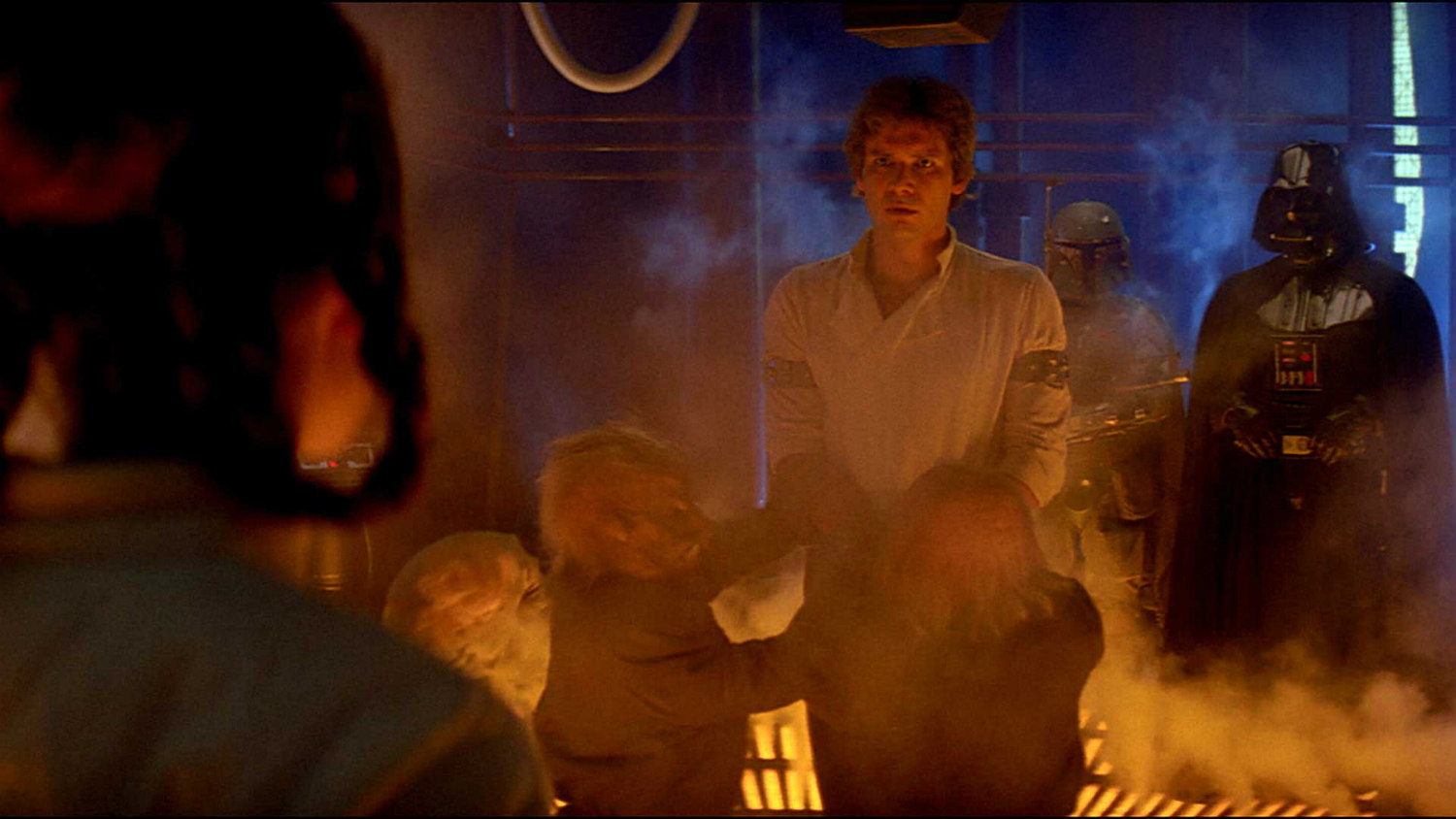 Harrison Ford’s line change suggestion led to one of the greatest reaction shots in movie history.

Han Solo and Princess Leia have the hots for each other, but disguise it with constant bickering. The eventual acknowledgement of their feelings leads to the greatest declaration of love ever depicted on the big screen. It‚Äôs uttered as two people are torn apart, possibly, forever. Princess Leia looks at Han and says ‚ÄúI love you.‚Äù His response (famously ad-libbed by Harrison Ford on set) is surprising and just perfect: ‚ÄúI know.‚Äù