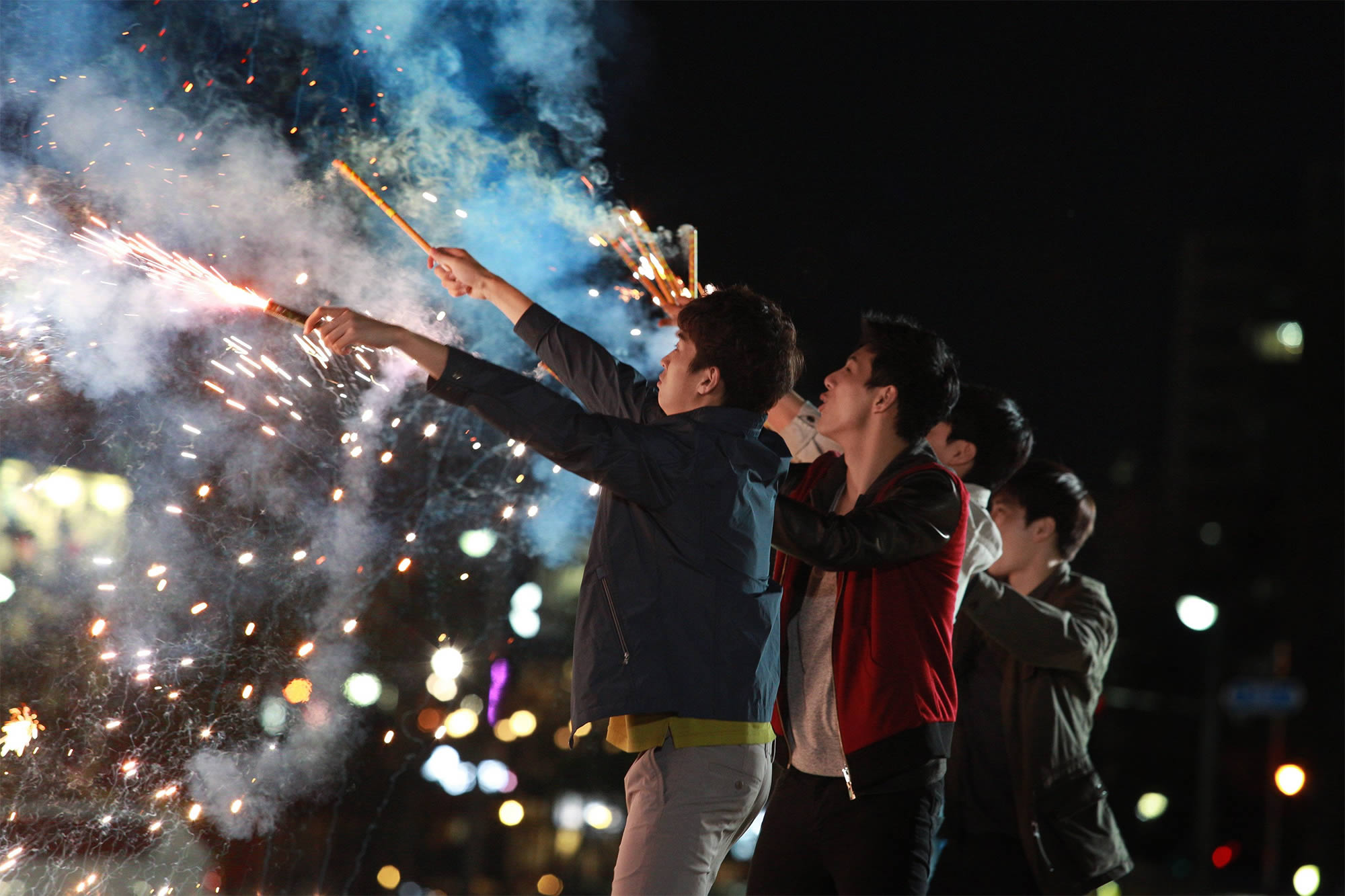 Now in its eleventh edition, this year’s London Korean Film Festival boasts some 40 features, a smaller number of which toured beyond London to Sheffield, Manchester, Nottingham, Glasgow and Belfast.

Amid the usual programme of Korea’s latest hits and indie titles, shorts and documentaries, there was also a welcome showcase of work directed by women (including the festival opener), as well as retrospectives of the films of writer/director Le Chang-ho and actor Baek Yoon-sik. Here is a selection of ten highlights. 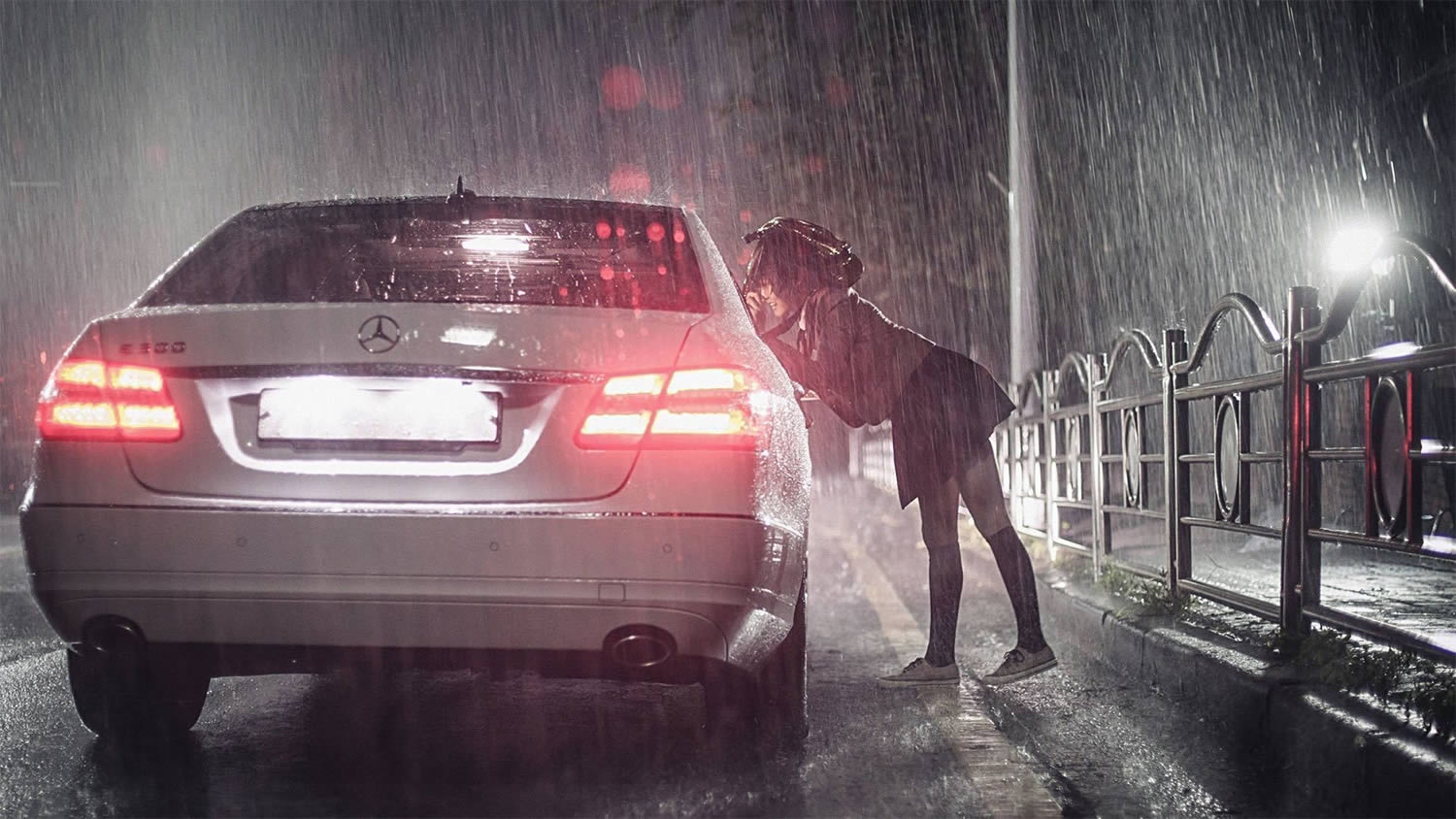 Min-jin (Shin Ji-moon) about to be taken for a ride through the dark.

The first LKFF opener to have been directed by a woman, Lee Kyoung-mi’s thriller traces the disappearance of a young schoolgirl from the frantic perspective of her mother Yeon-hong (Son Ye-jin), even as her father (Kim Joo-hyuk) continues a vicious campaign for high office. It is a taut, twisty affair, pivoting around the question of whether Min-jin’s disappearance is the result of ruthless electioneering or of something closer to home. In this precise interlacing of the political and the personal, we see Yeon-hong both investigating and unravelingâ€”a woman lost in a world that privileges male drive and ambition. 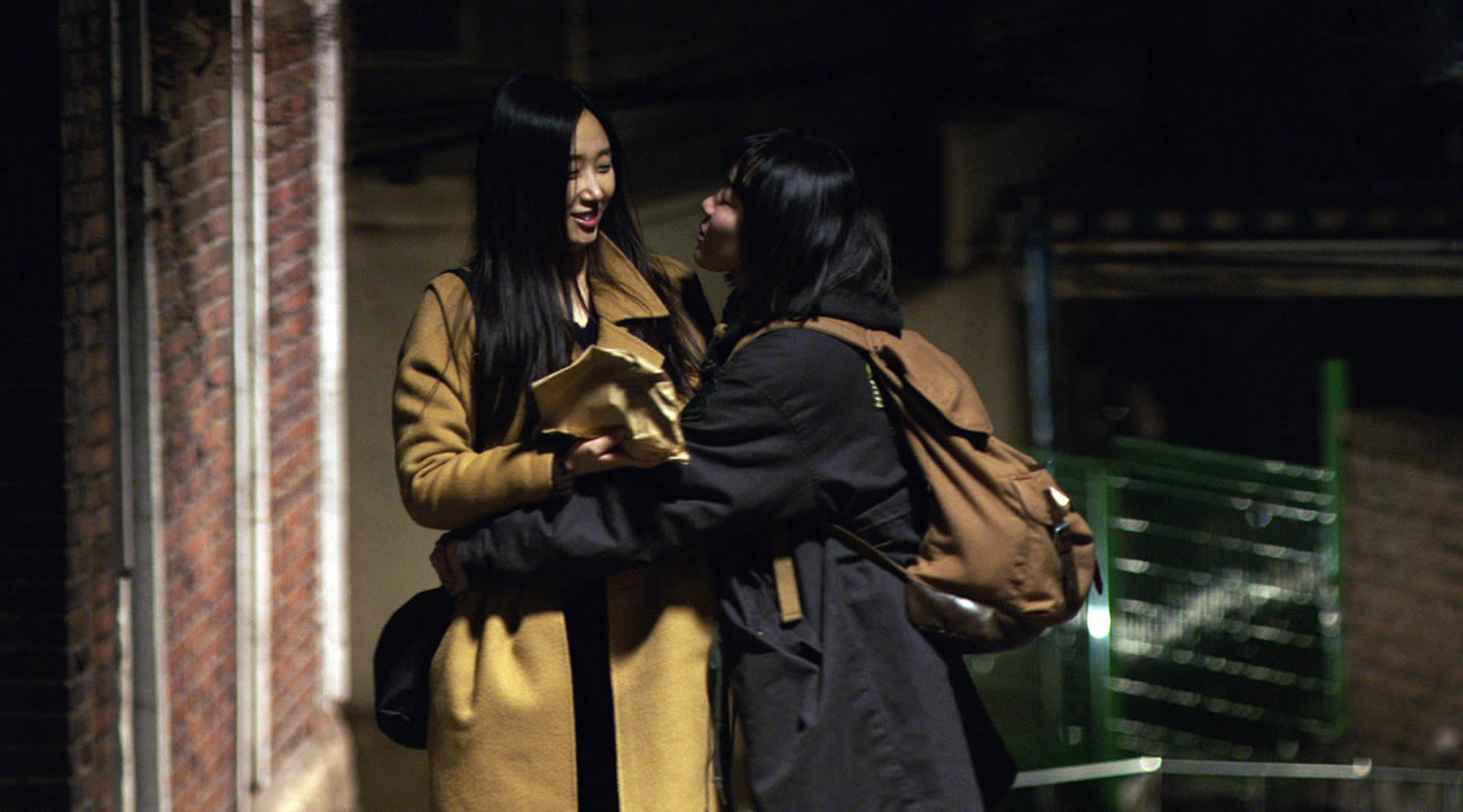 Love and loss tread delicately in this lesbian romance.

Also directed by a woman, this feature debut from writer/director Lee Hyun-ju follows the template of a standard romance: the meet-cute, the breakup, followed (maybe) by reconciliation. Yet as fine arts student Yeon-ju (Lee Sang-hee) struggles to express her identity through her work while also experiencing first love with the more confident bartender Ji-soo (Ryu Sun-young), “Our Love Story” distinguishes itself both by the subtle understatement of its storytelling and characterisation, and by the Sapphic nature of the relationship that it tracks. Here lesbianism is both an incidental matter of fact, and something not yet part of Korean society’s expectations of women. 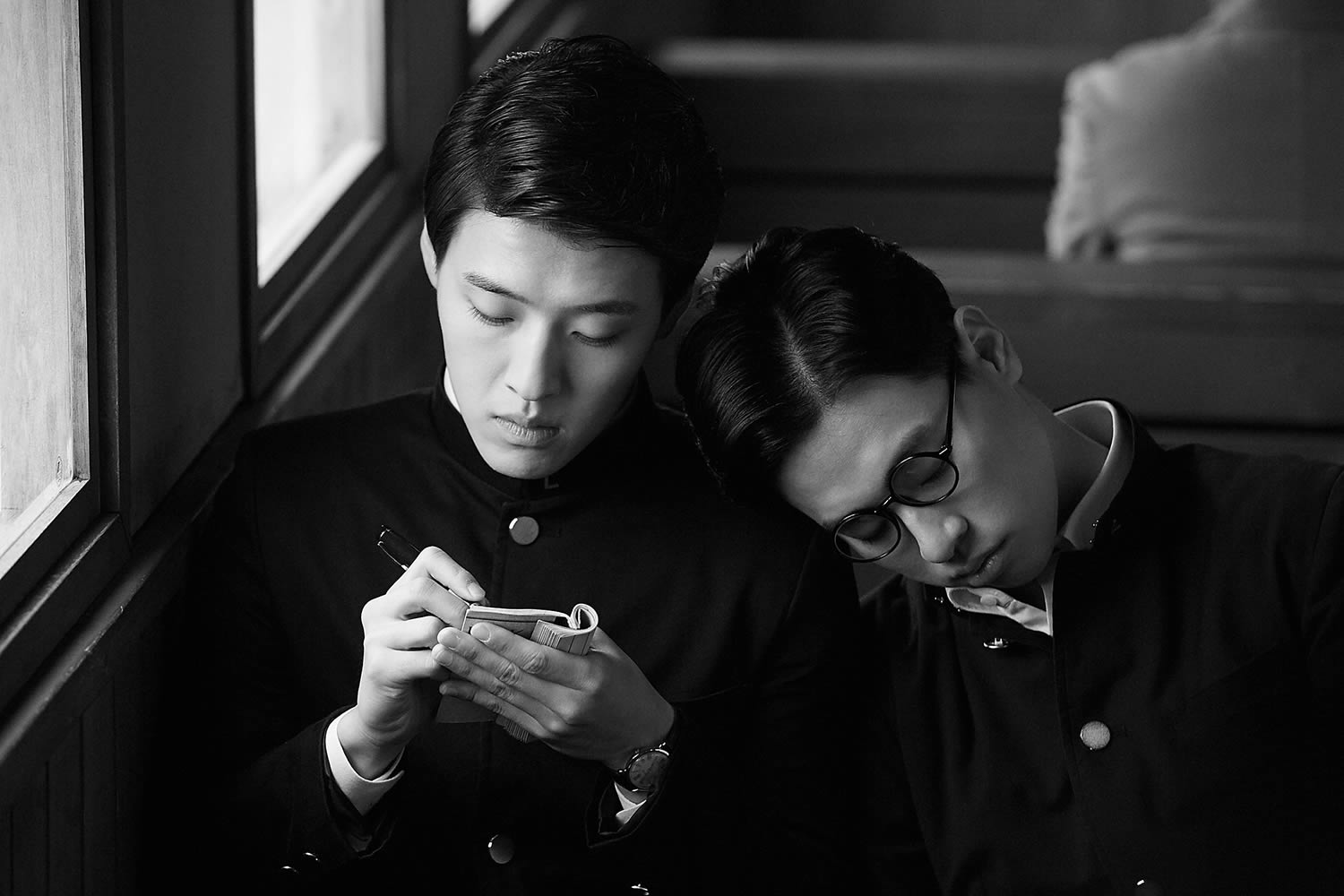 The poet and the political activistâ€”or is it the other way around?

Dong-ju: The Portrait of a Poet

Despite its title, this biopic from Lee Joon-ik is more diptych than portrait, following the parallel careers of emerging poet Yun Dong-ju (Kang Ha-neul) and of his cousin the revolutionary Song Mong-gyu (Park Jeong-min), both struggling to find their Korean voice under the repressive Occupation by the Japanese. “Are you just a shadow of Song Mong-gyu?”, Dong-ju is asked by his Japanese interrogatorâ€”and sure enough, as this monochrome film shows two men boldly if vainly resisting tyranny, actions and words are seen as recto and verso from the same manuscript of history. 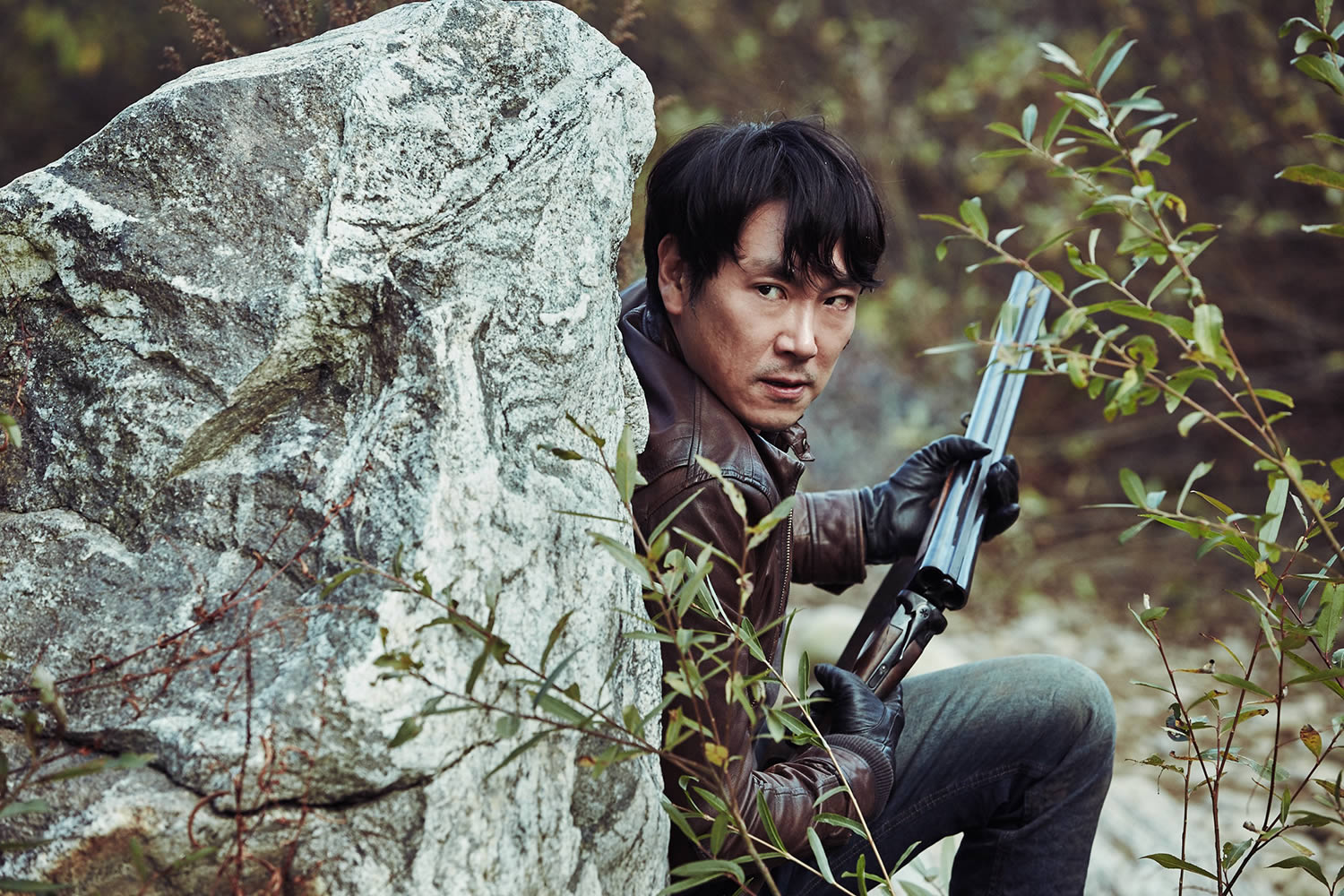 Dong-geun (Cho Jin-woong) having a bad day at black rock.

Corrupted by the discovery of gold in the mountains, Dong-geun (Cho Jin-woong) and his associates are prepared to commit murder for their claim, but find themselves facing off against elderly Moon Ki-sung (Ahn Sung-ki), a hunter haunted by his past who will do anything to keep his sort-of granddaughter Yang-soon (Han Ye-ri) safe. Lee Woo-chul’s feature debut is a mash-up of genresâ€”explicitly referencing “First Blood” (1982) and “Deliverance” (1972), but also bringing in a rich seam of melodrama with traces of the supernatural, and with a substrate message about self-sacrifice and continuity being a community’s richest treasure. 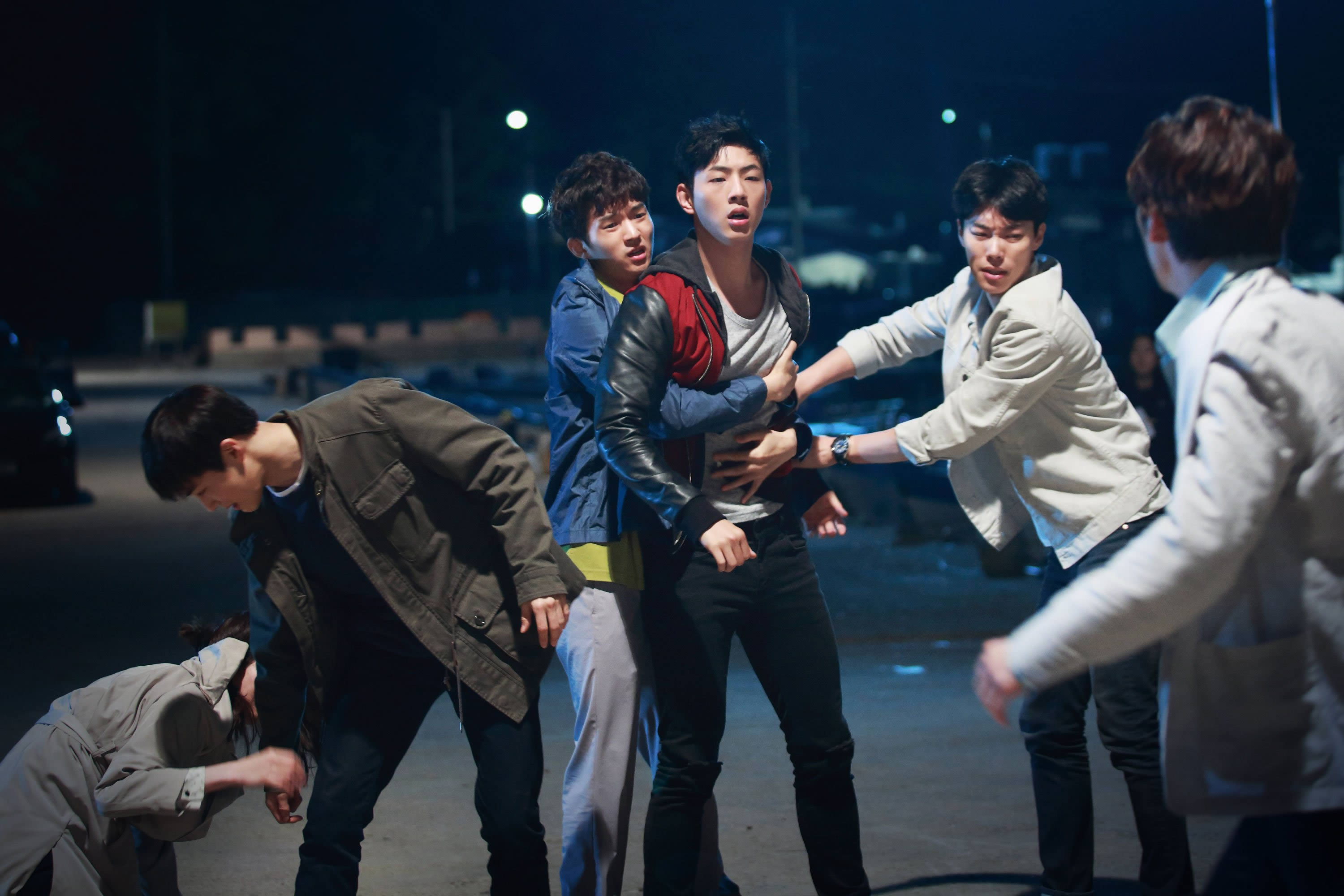 It begins (and ends) with slow-motion footage of four young men running carefree on a beach, their whole livesâ€”like the boundless oceanâ€”ahead of them. Yet later that evening, these friends will intervene when they see a man beating a woman, and the consequences of their well-intentioned action will send them crashing into the more cynical, treacherous world of adulthood. Choi Jeon-yeolâ€™s film, built from flashbacks and flashforwards that spiral outward from that idyllic scene in the sand, is all at once a bleak coming-of-ager, an exposĂ© of the iniquities of Korean justice, and a vision of Paradise Lost. 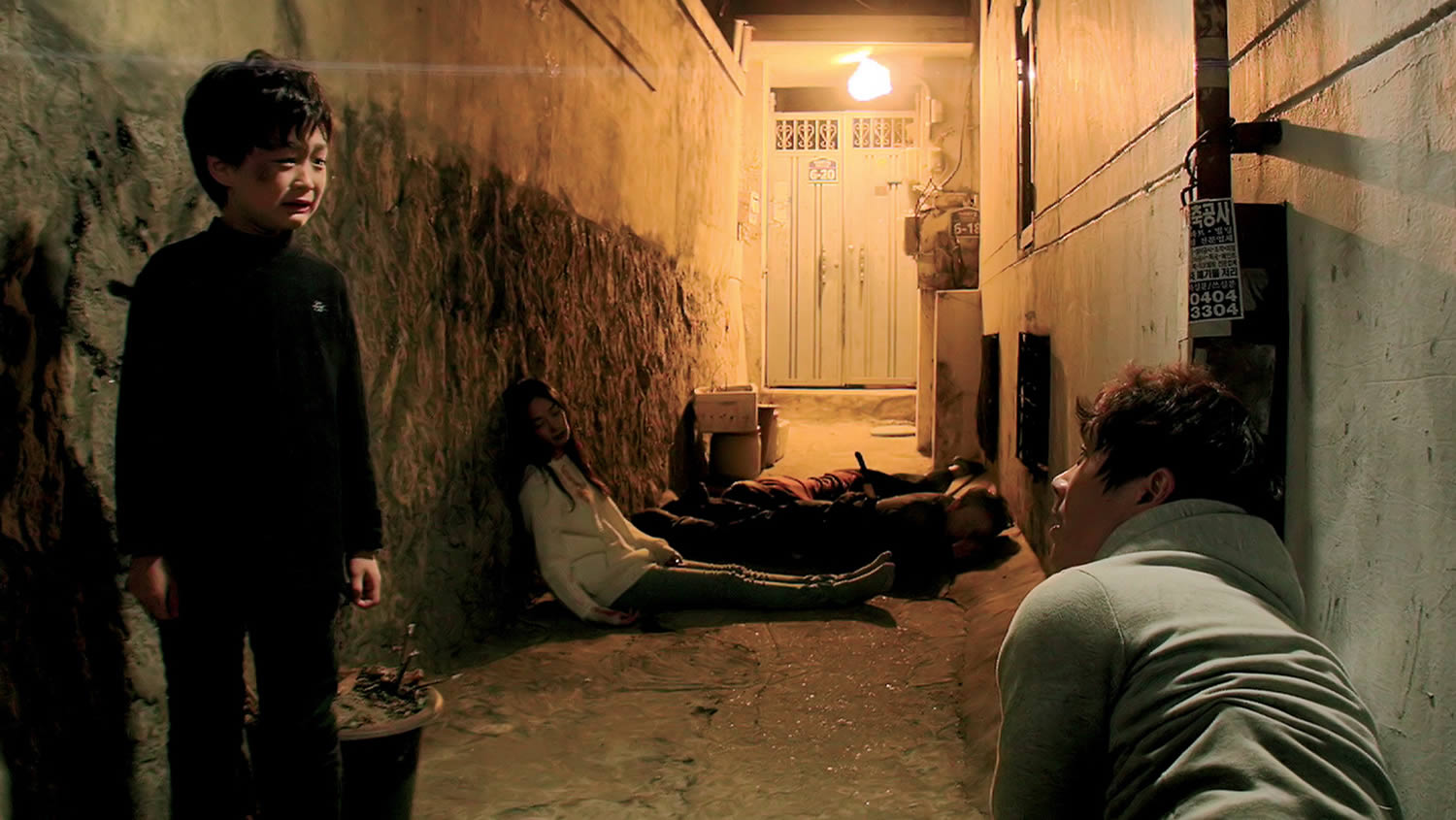 Su-mi (Lee Ju-won) confronted with himself, past and present.

Documentary maker Su-mi (Lee Ju-won) keeps waking up in a depopulated shantytown, uncertain whether he is dreaming, dying or dead.Â Its winding alleyways and staircases form an Escher-like maze in which he tries to navigate his own fragmenting psyche and family history. Scenes of bloody violence unfolding around him reveal that something is very amiss, but Su-mi is evading as much as confronting the horrific truth. Like his 2011 debut “A Fish” (which also screened at LKFF 2016), Park Hong-minâ€™s indie experiment “Alone” is a disorienting, Lynchian tale of a lost soulâ€”and is just about unnerving and unusual enough to get away with feeling slightly overextended. 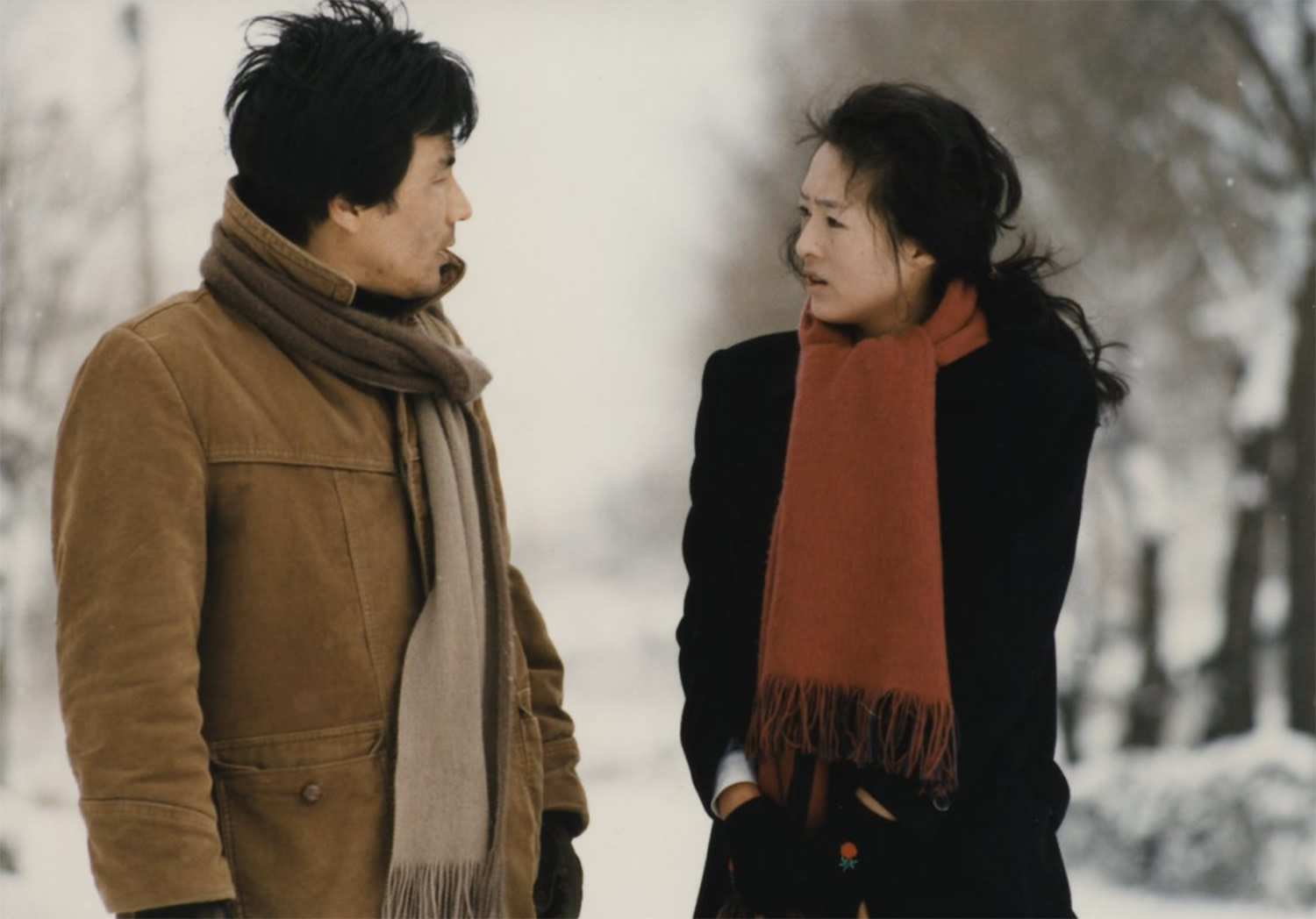 The Man With Three Coffins

Also concerned with lost souls, this film follows Yang (Kim Yung-kon) as he attempts to bring the ashes of his wife (Lee Bo-hee) to her birthplace somewhere near the Demilitarized Zone. On his way, he crosses paths with two other women, both also played by Lee: the prostitute Dal-lae who mysteriously dies after meeting him; and the nurse Choi who is escorting an elderly dying patient to his own ancestral home in the North. Abstract and enigmatic, this Shamanic classic from writer-director Lee Chang-ho is set in a limbo where divided nations meet and life borders death. 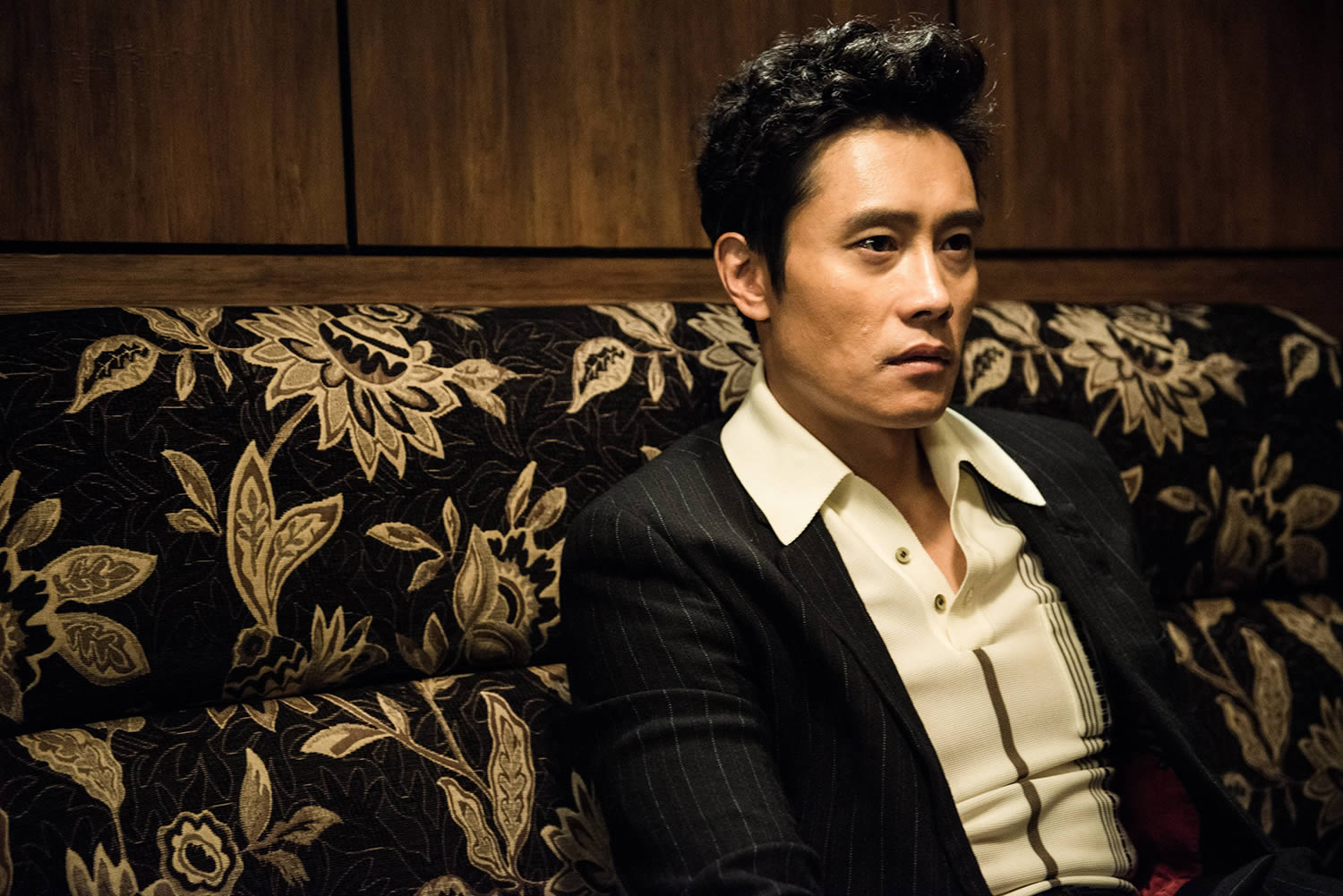 Inside Men: The Original

At a full three hours, this directorâ€™s cut of â€śInside Menâ€ť is a sprawling crime epic and revenge thriller, in which writer/director Woo Min-ho unfolds a labyrinthine plot over several years to anatomise what one character calls the â€śdeep-rooted, back-scratching relationship between politics, industry and the media.â€ť It is a tense, but also funny examination of power, corruption and old boysâ€™ networks in contemporary Korea, with Baek Yoon-sik putting in a brilliantly cynical turn as a right-wing newspaper editor whose pen is often mightier than any sword (or axe or saw). 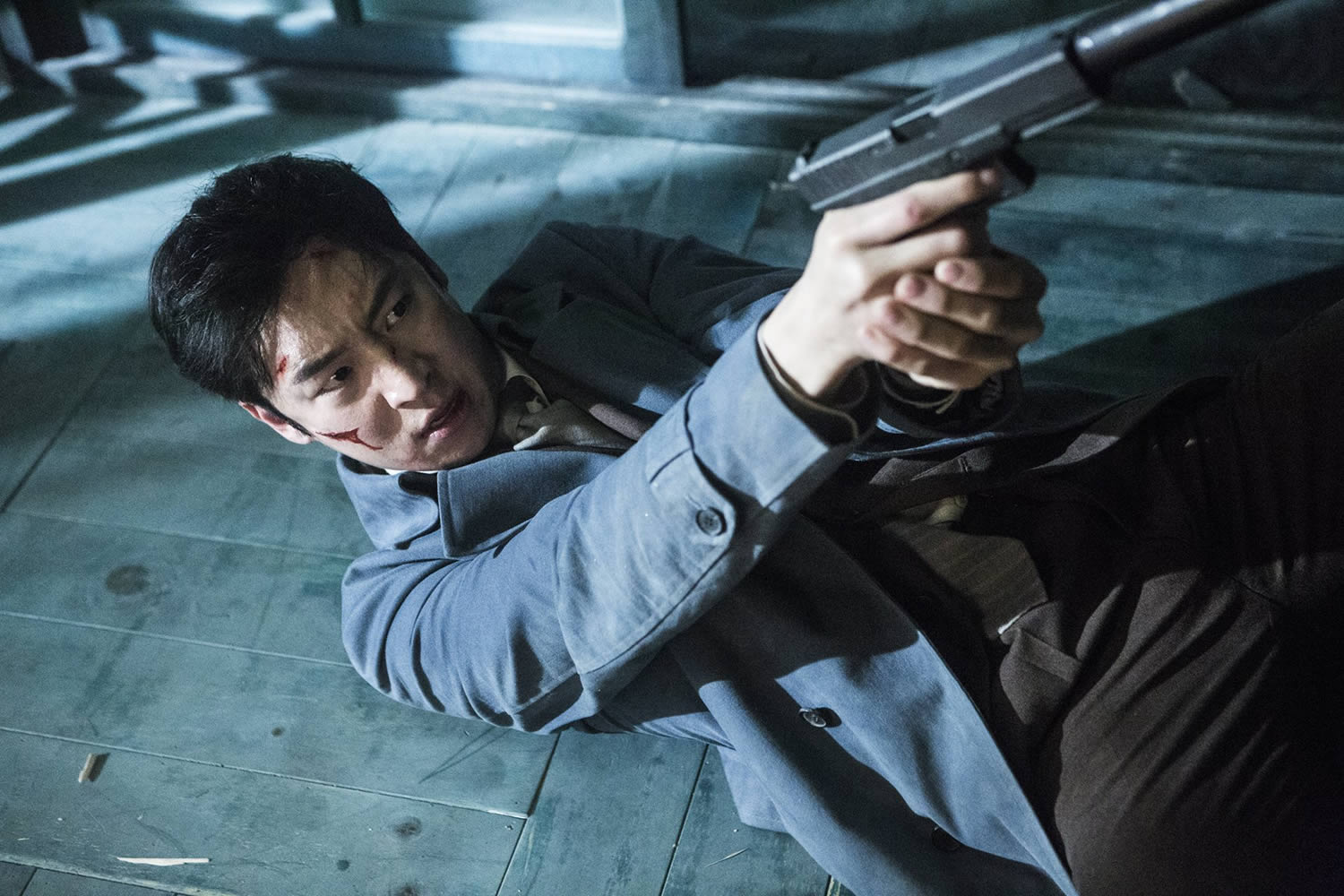 Sung Hee-jo’s film transforms the classic Korean bandit orphan/folk hero Hong Gil-dong (here played by Je Hoon-lee) into a 1980s ‘tec who seeks revenge on his mother’s killer, but finds only conspiracyâ€”and two adorable young sisters (Roh Jeong-eui, Kim Ha-na) who challenge Gil-dongâ€™s heartlessness. This is highly stylised film noir, with some of the backgrounds rendered digitally to suggest an artificial, cartoonish shadow world of pure genreâ€”but somewhere in Gil-dongâ€™s quest for lost identity is an allegory of the violent divisions and unresolved conflicts created by Korea’s war in the Fifties. 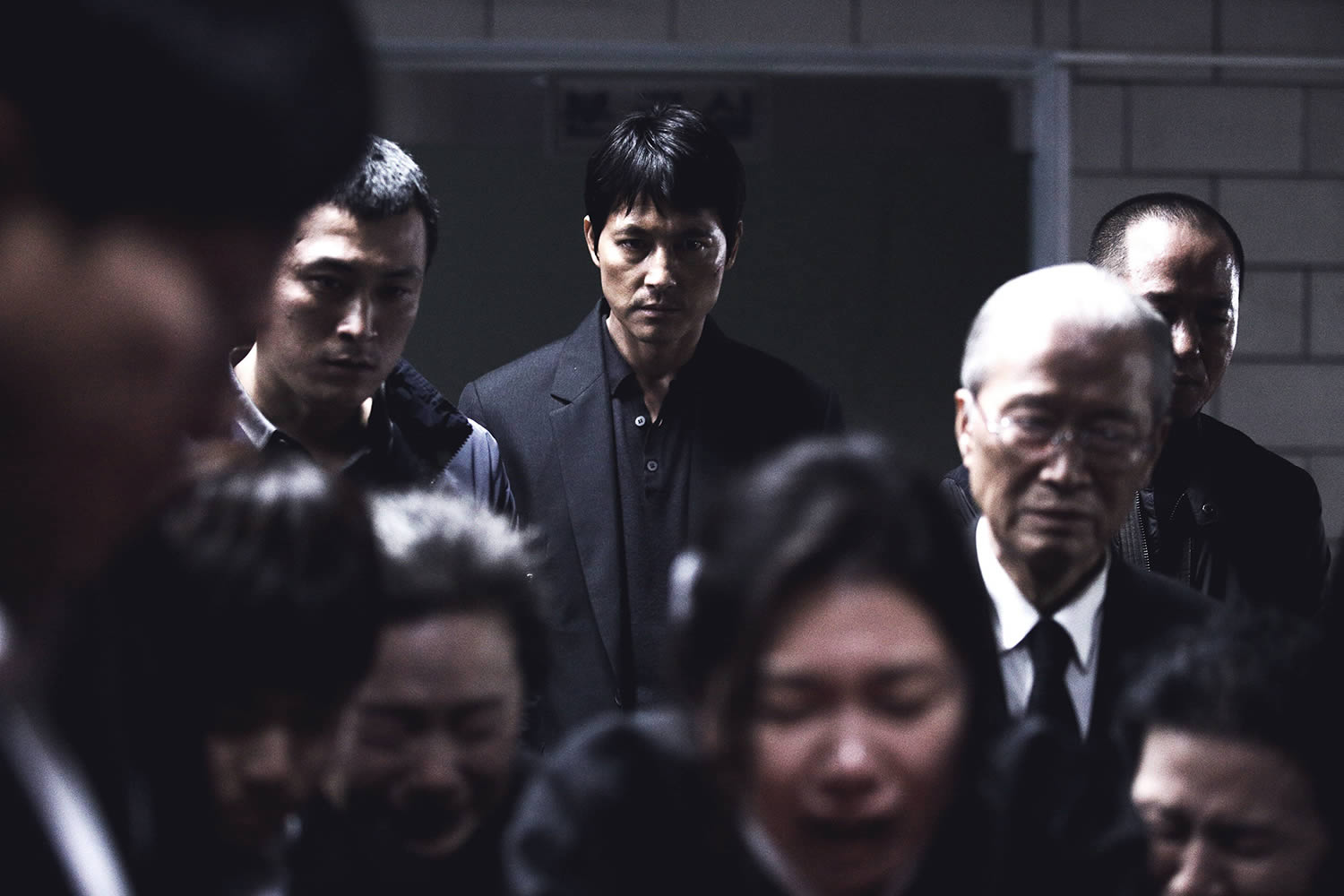 Asura: The City of Madness

Another Korean noir (and my favourite Korean film of the year), Kim Sung-suâ€™s grandiose crime drama concerns morally compromised policeman Han Do-kyung (Jung Woo-sung) desperately struggling to break free from the hell of corruption in which he has become trapped. As his wife dies of cancer, Han too is rotting from the inside, with recovery looking increasingly improbable. The result is an utterly bleak and unapologetically violent combination of action spectacle, morality play, mythic tragedy and national parable, as the terminal trajectory of Koreaâ€™s brutal hierarchies and power structures are laid brutally bare, with no way out.