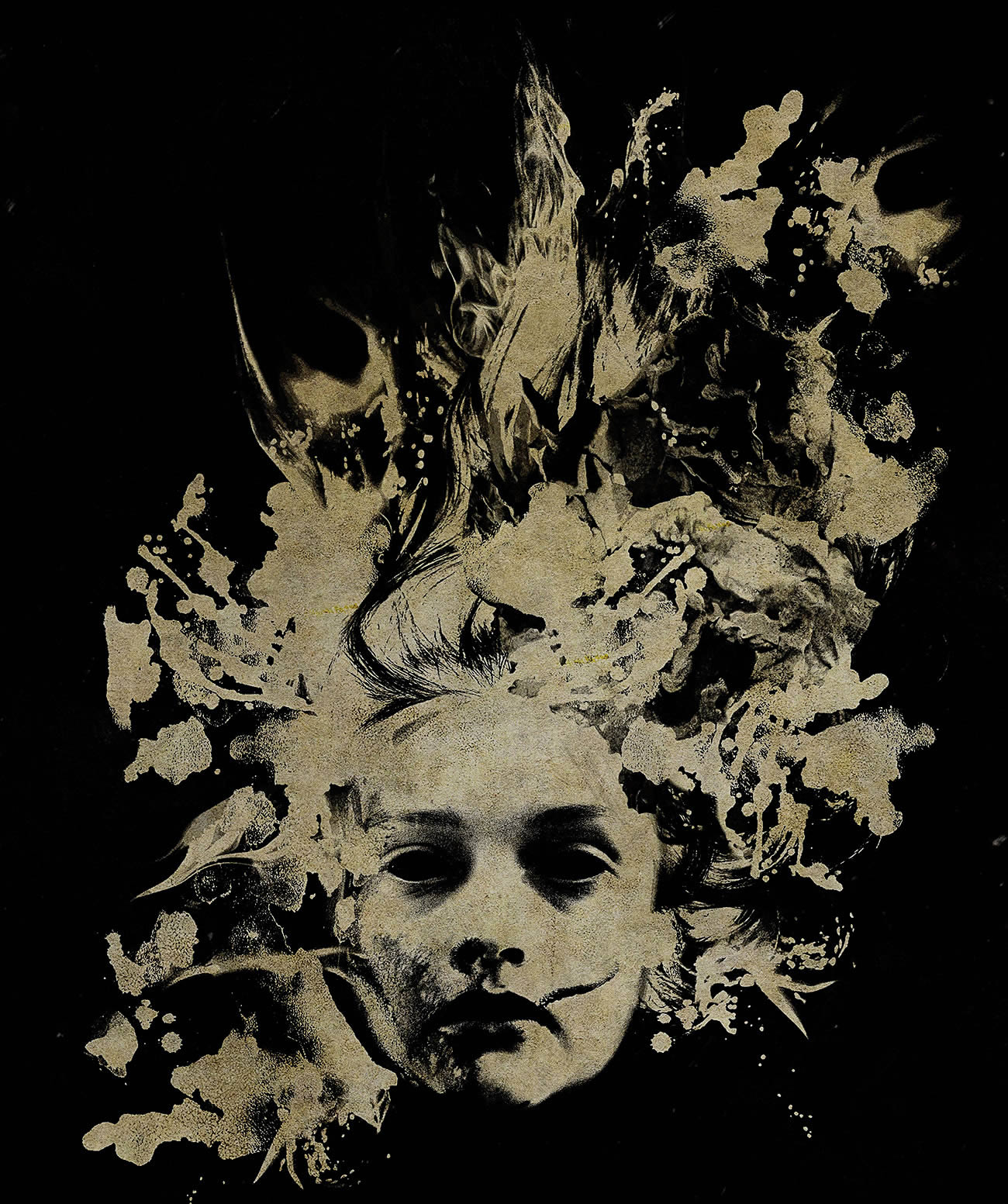 Upon the glorious advent of the Internet, the studios were able to spread the word of a filmâ€™s release far easier than they could in the Dark Ages (i.e. before the days of the World-Wide-Web).

Posters once took exclusive pride of place on billboards, bus stations and on the walls of video shops; as well as in the foyers of the local multiplex. However, because the Internet is so darn fast, one-sheets are now viewed at the mere click of a button. Sometimes, these things even move: lenticular and motion posters are all the rage.

Here is a selection of ten great movie posters currently doing the rounds. 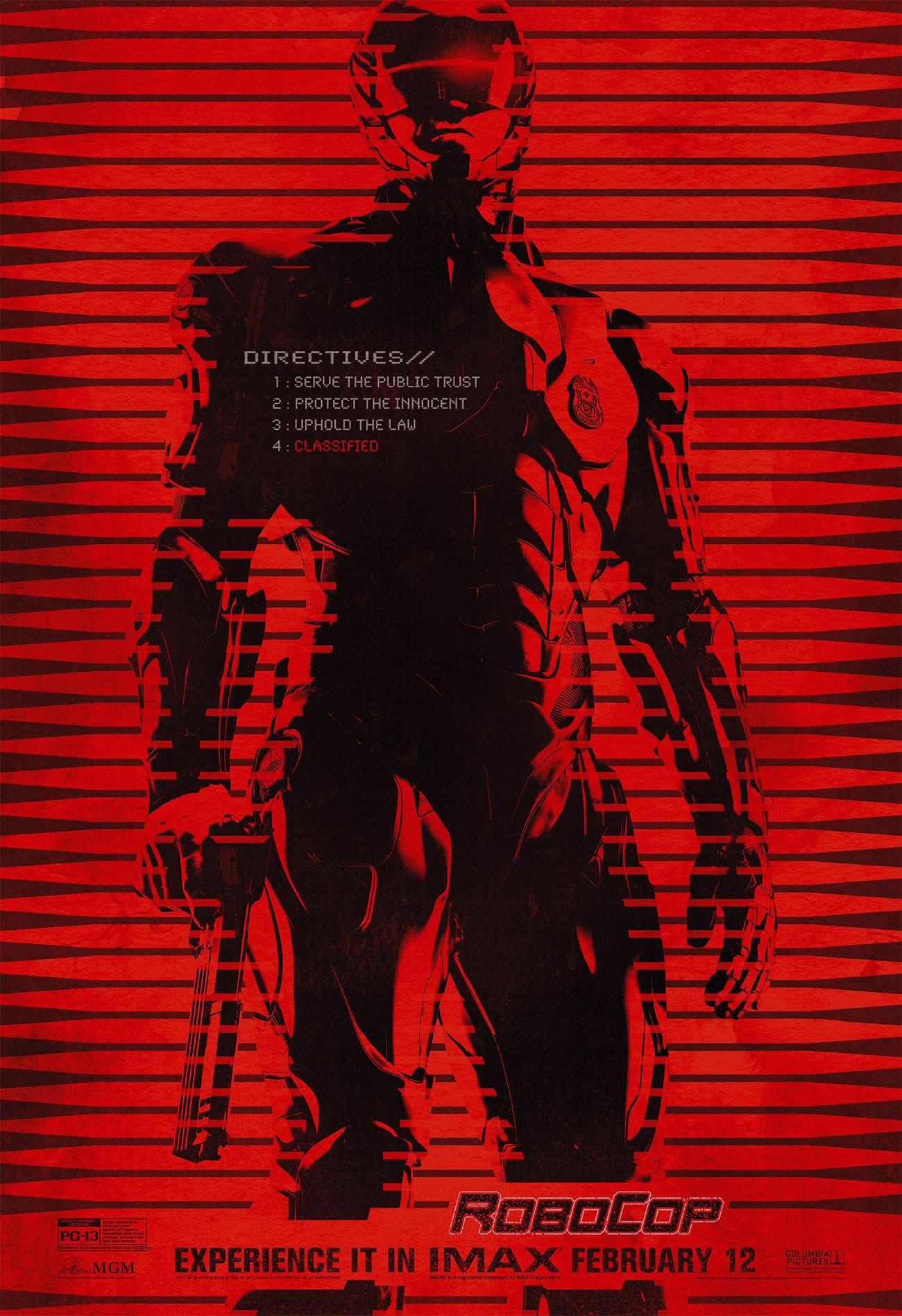 A tricolor design by Cold Open.

Hereâ€™s the thing: Iâ€™m getting hella bored with stencilled street-art-style images used to promote blockbusters. Hollywood doesnâ€™t make edgy movies. For me, stencilled/spray-painted logos, pictures, etc. are used exclusively for satirical and anti-authoritarian purposes on walls and street corners. The â€śRoboCopâ€ť IMAX poster worked very well, though, given the dystopian futurism inherent to the premise. 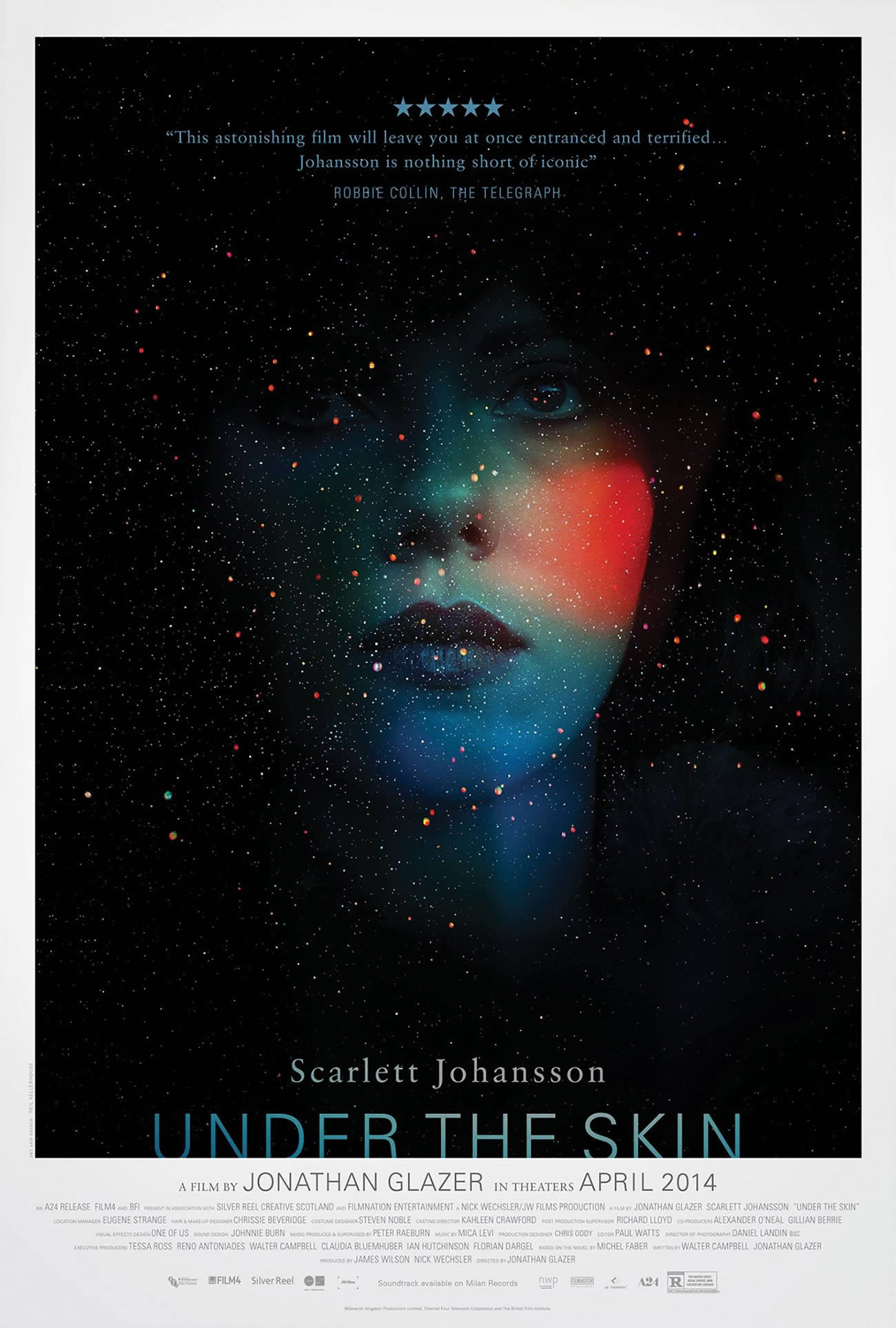 A poster with a colorful fade-in effect by Kellerhouse, Inc.

One of the worldâ€™s most admired female film stars showcased in an enigmatic portrait for an enigmatic sci-fi movie. Scarlett Johanssonâ€™s gorgeous face is shaped by light and the cosmos. Mysterious and captivating, this is nothing short of a triumph. Kellerhouse Inc. graphic designers are the brains behind it. 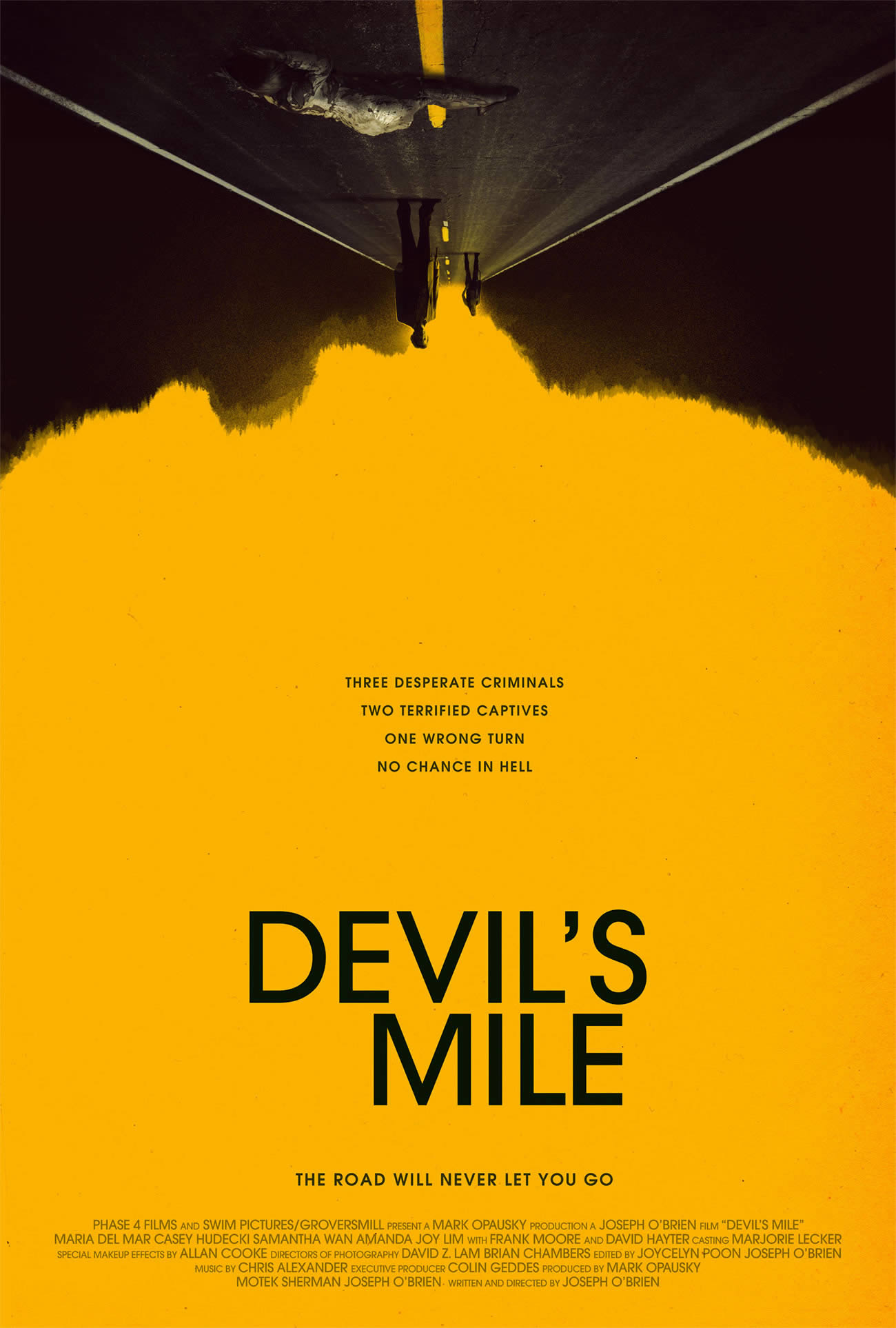 Itâ€™s a brave one, this. How so? Well, it turns the poster upside down and you have to crane your neck to see it properly. The strange perspective aptly captures the theme of â€śDevilâ€™s Mileâ€ťâ€“it moves from being a crime thriller into more supernatural territory. The composition is wacky and the egg yolk yellow and the inky blackness further the impact of this unusual design. 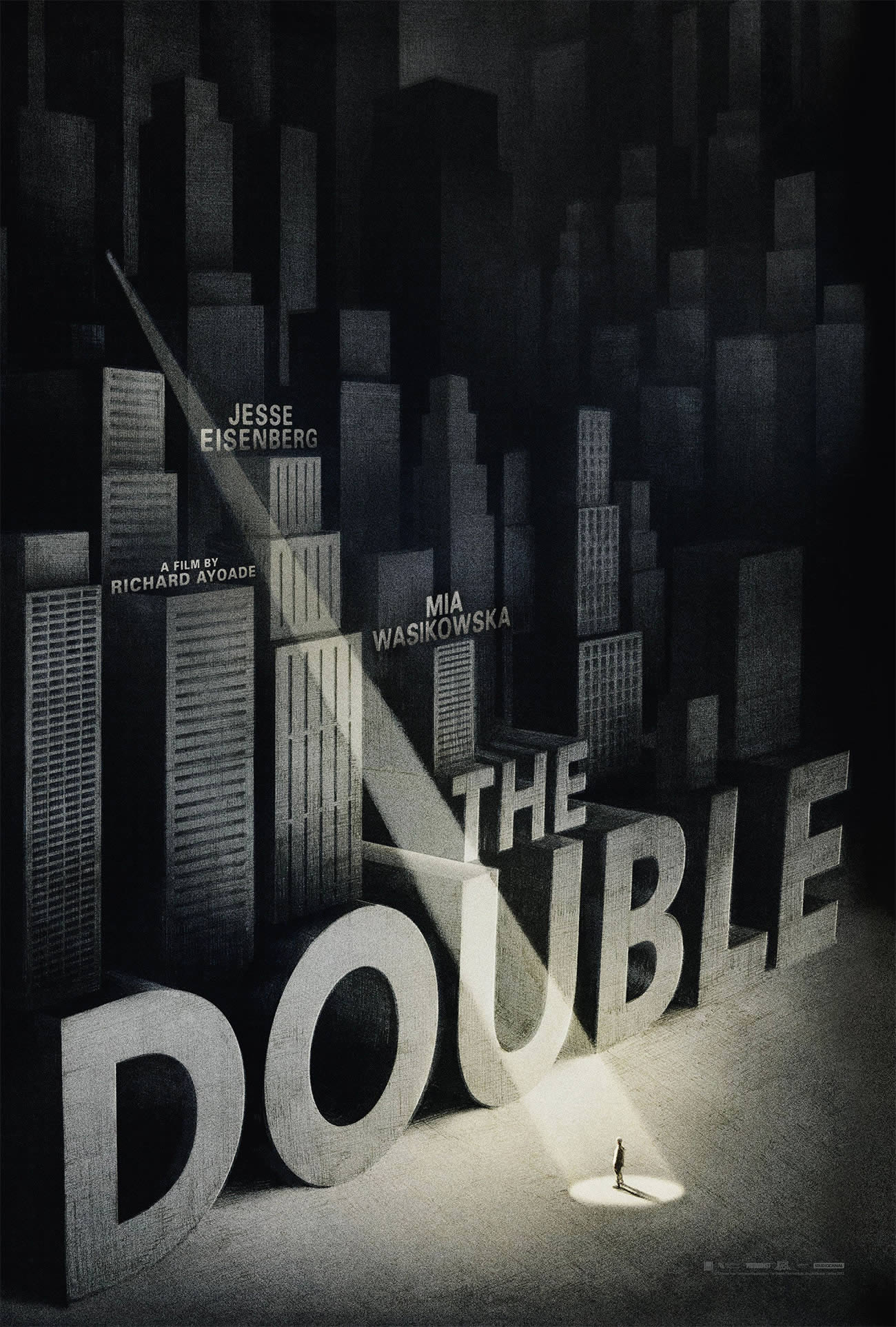 Richard Ayoade has followed up his debut, â€śSubmarine,â€ť with yet another literary adaptation in the form of â€śThe Double,â€ť a novella by Russian literary titan Feydor Dostoyevsky. The art deco cityscape and the gigantic spotlight shining down on the lone individual is a dreamy combination of Fritz Langâ€™s â€śMetropolisâ€ť and Franz Kafkaâ€™s doomed protagonist Josef K. 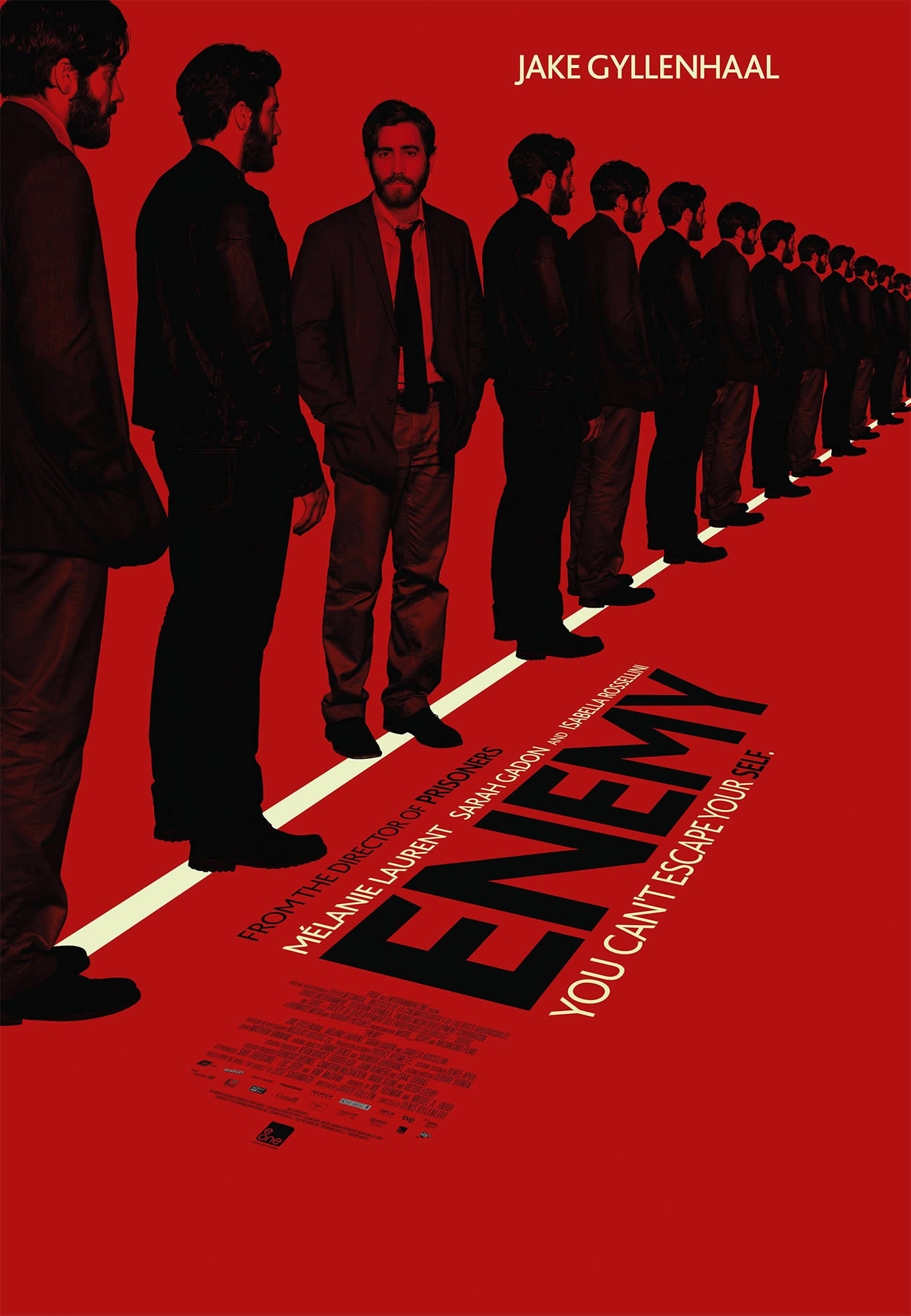 â€śPrisonersâ€ť director, Denis Villeneuve, has teamed up again with actor Jake Gyllenhaal for an adaptation of â€śThe Double,â€ť a novel by Portuguese writer JosĂ© Saramogo, which also took inspiration from the 1846 Dostoyevsky novella of the same name. The promotional campaign for â€śEnemyâ€ť has taken inspiration from surrealist art. It all links neatly to the schizoid identity crisis suffered by the lead character. 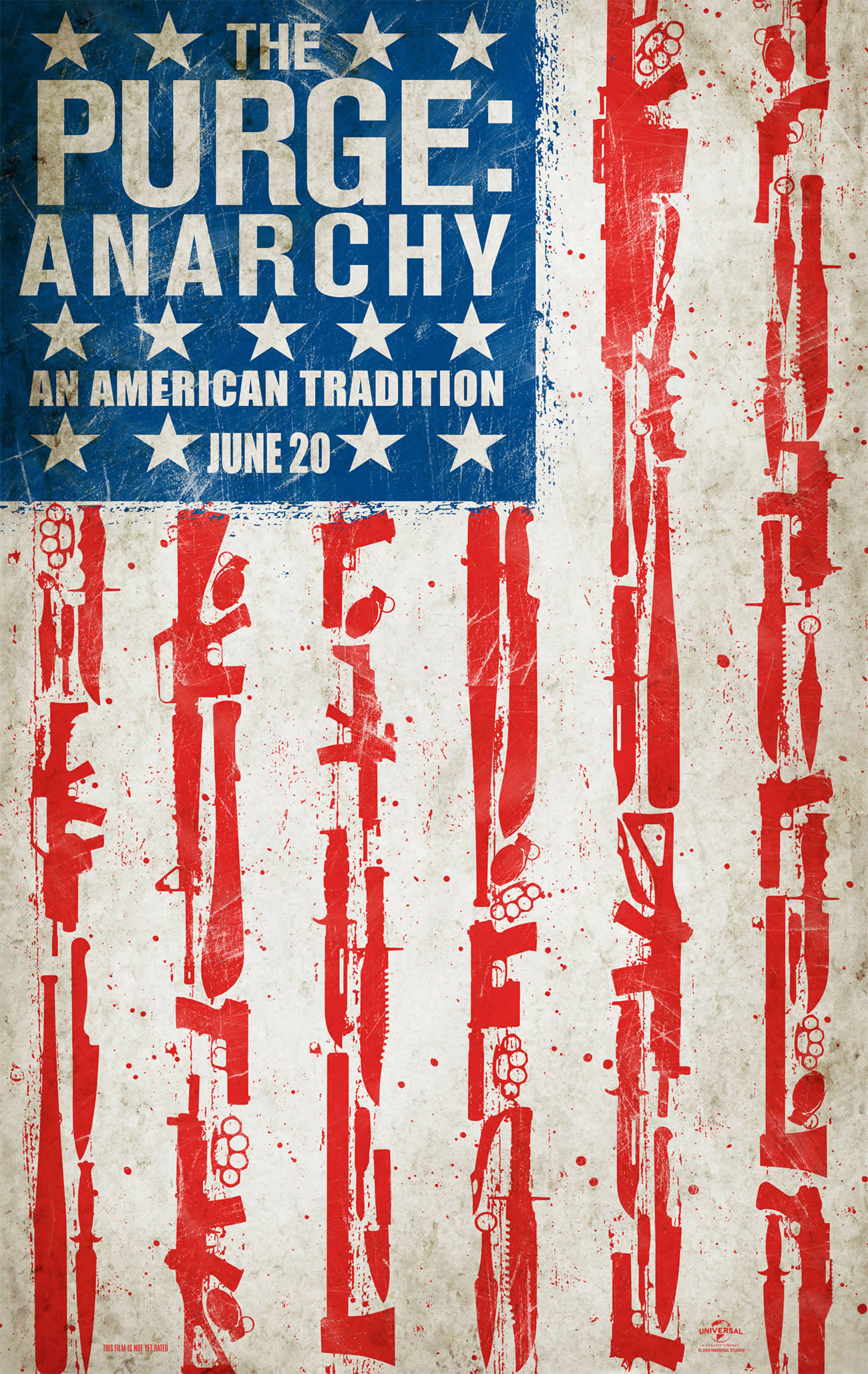 Holy cow, â€śThe Purgeâ€ť (2013) was an average movie. It did, however, have a very intriguing premise (even if it totally fudged that intriguing premise). But guess what? â€śThe Purgeâ€ť made some money! It is a universally acknowledged truth, as Jane Austen never wrote, that a hit feature film is in want of a sequel. Lethal weapons made up to look like the star-spangled US flag is quite possibly far cleverer than the forthcoming movie will be. 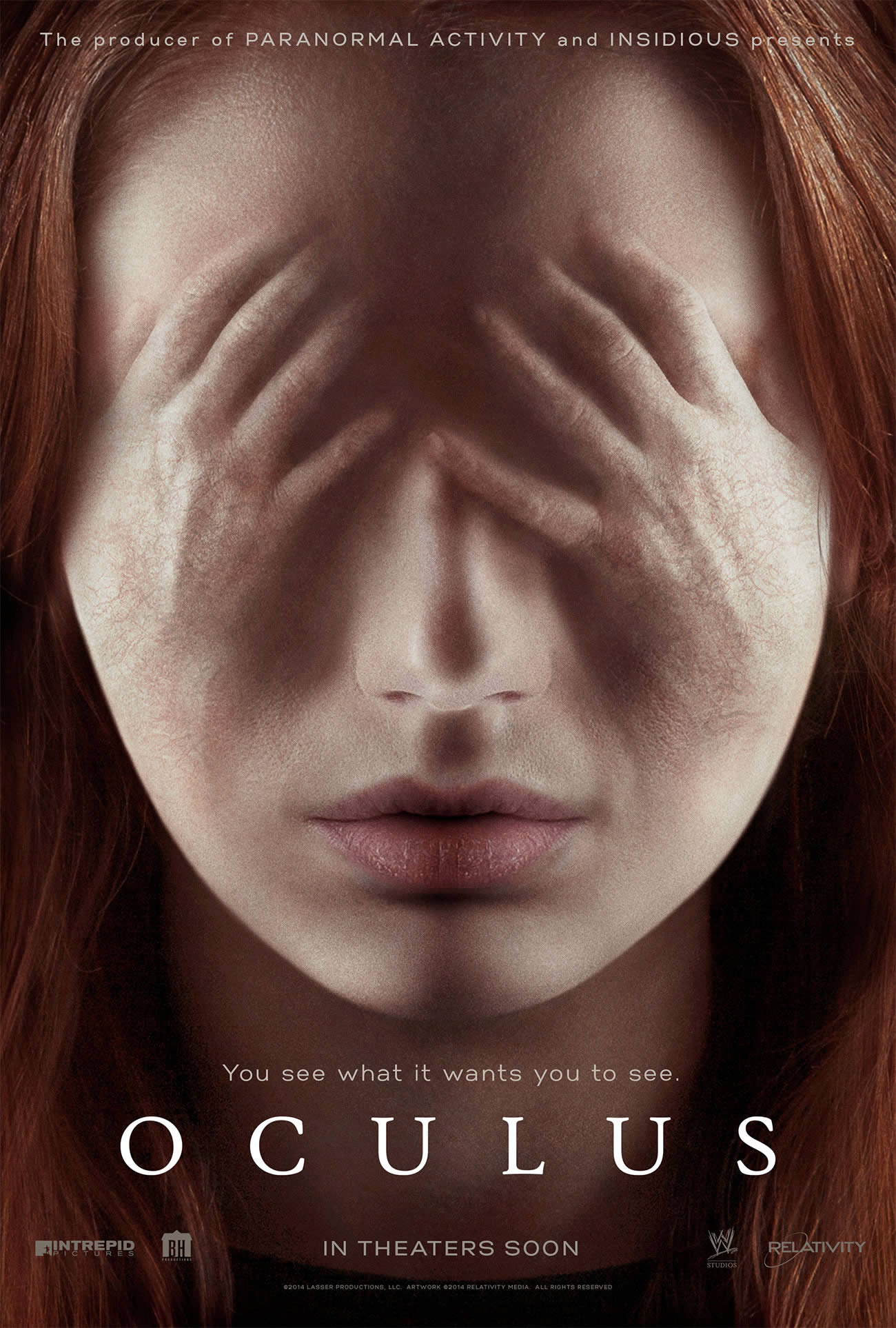 ARSONALâ€™s one-sheet gets spectators ready for the upcoming movie scares.

Mike Flanaganâ€™s â€śAbsentiaâ€ť was a brilliantly done low-budget horror flick that had the critics and fans take notice. It did a lot with very little. So all eyes (pun intended) are on his next picture, â€śOculus.â€ť The close-up portrait shot of a young girl with aged hands covering her eyes is simple but very creepy. 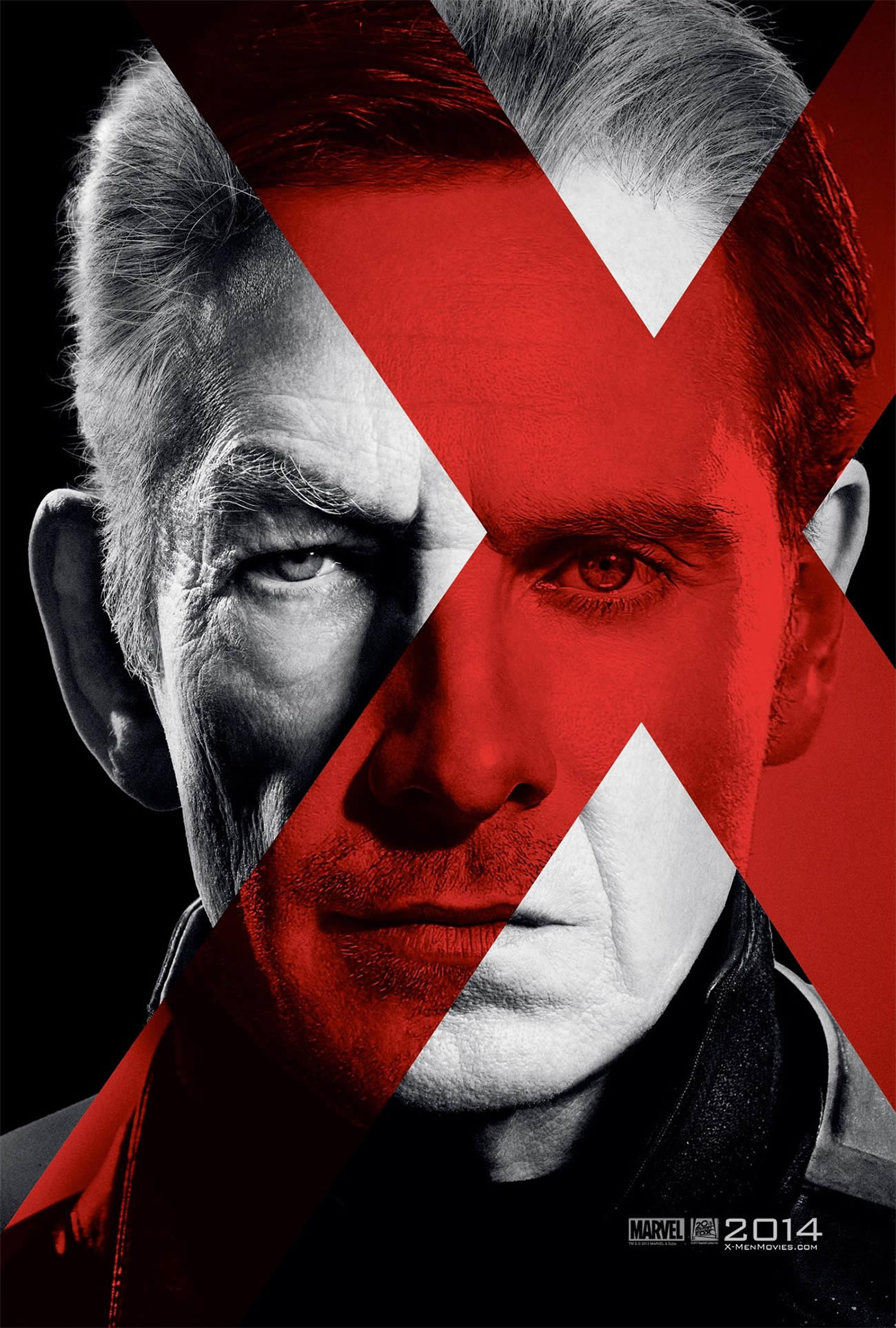 A brilliant use of the letter “X” by BLT.

X-Men: Days of Future Past

On a first glimpse, the poster looks very much like every other Photoshopped Hollywood poster out there. Look closer, though, because it is pretty darn clever. Ian McKellenâ€™s elderly Magneto is overlaidâ€“via a prominently positioned red “X”â€“ with Michael Fassbenderâ€™s younger Magneto, so that the subsequent photo-montage depicts both versions of the legendary Marvel villain. The actors feature in the forthcoming â€śX-Men: Days of Future Past,â€ť which joins the recent prequel with the cast from the original trilogy. How exciting! 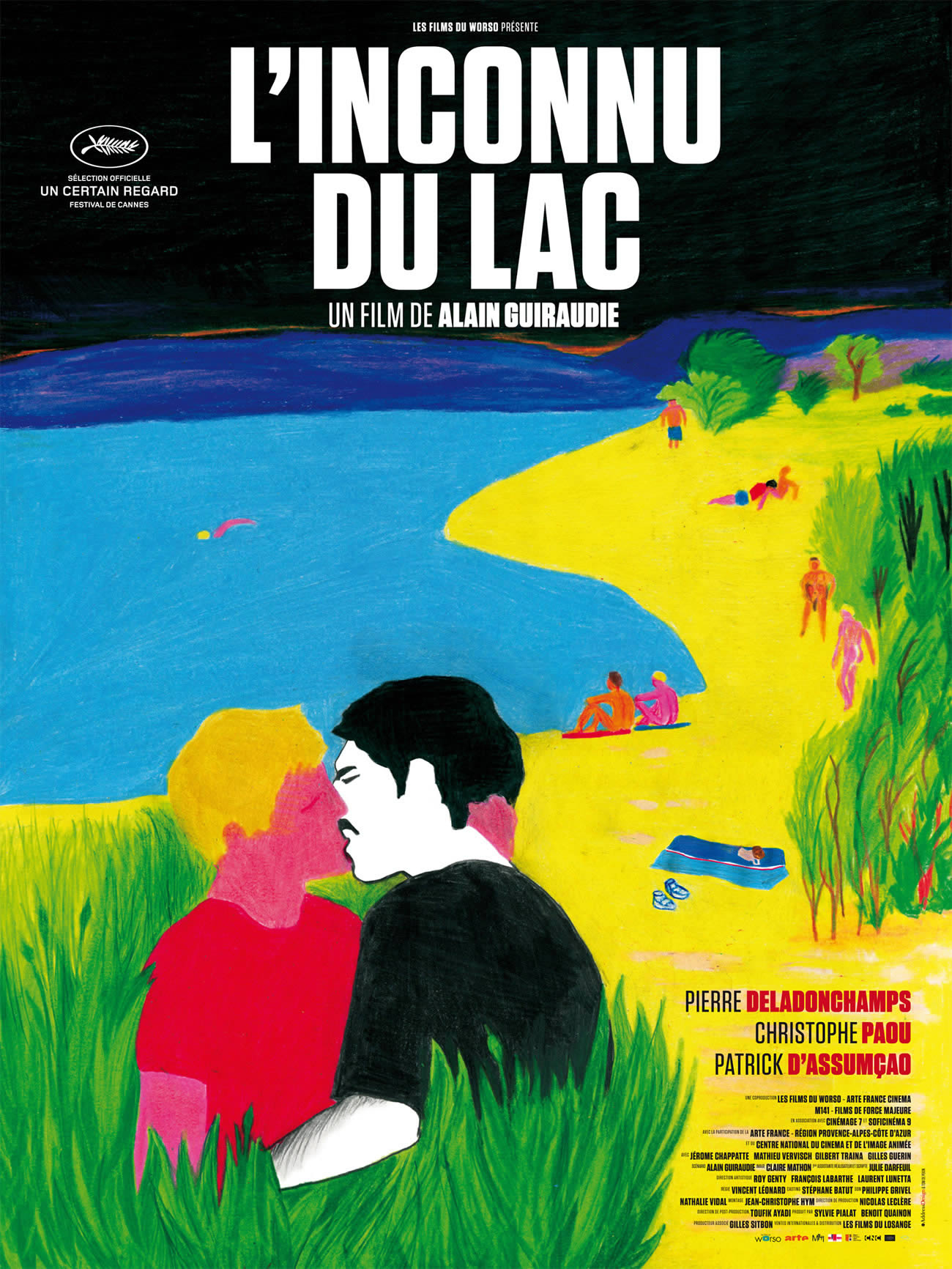 The striking poster for Alain Guiraudieâ€™s “Stranger by the Lake” went forÂ aÂ Post-Impressionist meets Fauvist art mashup. The eye-popping colour recalls the work of Matisse, while the figures andÂ use ofÂ locationÂ could be from a Georges Seurat painting. Itâ€™s a gorgeous piece of artÂ that belongs in a gallery.

The Rorschach test meets pale, ghostly flames. â€śThe Quiet Onesâ€ťâ€“an excellent and ironic title for a film about poltergeistsâ€”has achieved the almost impossible: a poster that I donâ€™t want to look at for too long because itâ€™s intensely unsettling. Bravo!