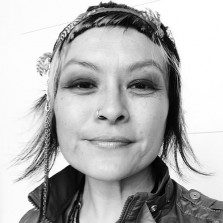 Cathy was born in Taipei, Taiwan, and has been drawing as far back she can remember. She came to the United States when she was 12, grew up in the generic suburbs of Orange County with her aunt and uncle. Playing Ms Pacman and visiting Disneyland were the only activities that brought her delight and sparked inspiration in her youth.

She escaped from the land of driving enthusiasts at the age of 17 and moved to Berkeley, where she received her B.A. in Fine Arts and a B.A in Architecture. Over the course of her professional design career, Cathy has worked at Urban Outfitters, Frog Design, Adaptive Path, and Hot Studio. She has lead a variety of projects and worked with clients like SFMOMA, YBCA, Electronic Arts, Nike, Dwell Magazine, and Warner Music Group. Her work has been recognized with numerous design awards and honors. Most recent mentions included "Webby Awards: Best of the web nominee for SFMOMA and Dwell Magazine" (2009) and "Interactive Media Awards: Outstanding Achievement for YBCA" (2011).

In addition, she has exhibited work in group and solo exhibitions in San Francisco and Oakland. She is a member of the Burning Man fire conclave and has performed at Burning Man and the Fire Dance Expo at Union Square in 2007, 2009, and 2010.

Right now Cathy is learning how to flow with life's natural rhythm and myriad of changes effortlessly. She is a fervent lover of music, fashion, and anything shimmering. She loves dressing up in flamboyant costumes and snapping glamour shots of herself.

ARTICLES BY THE AUTHOR