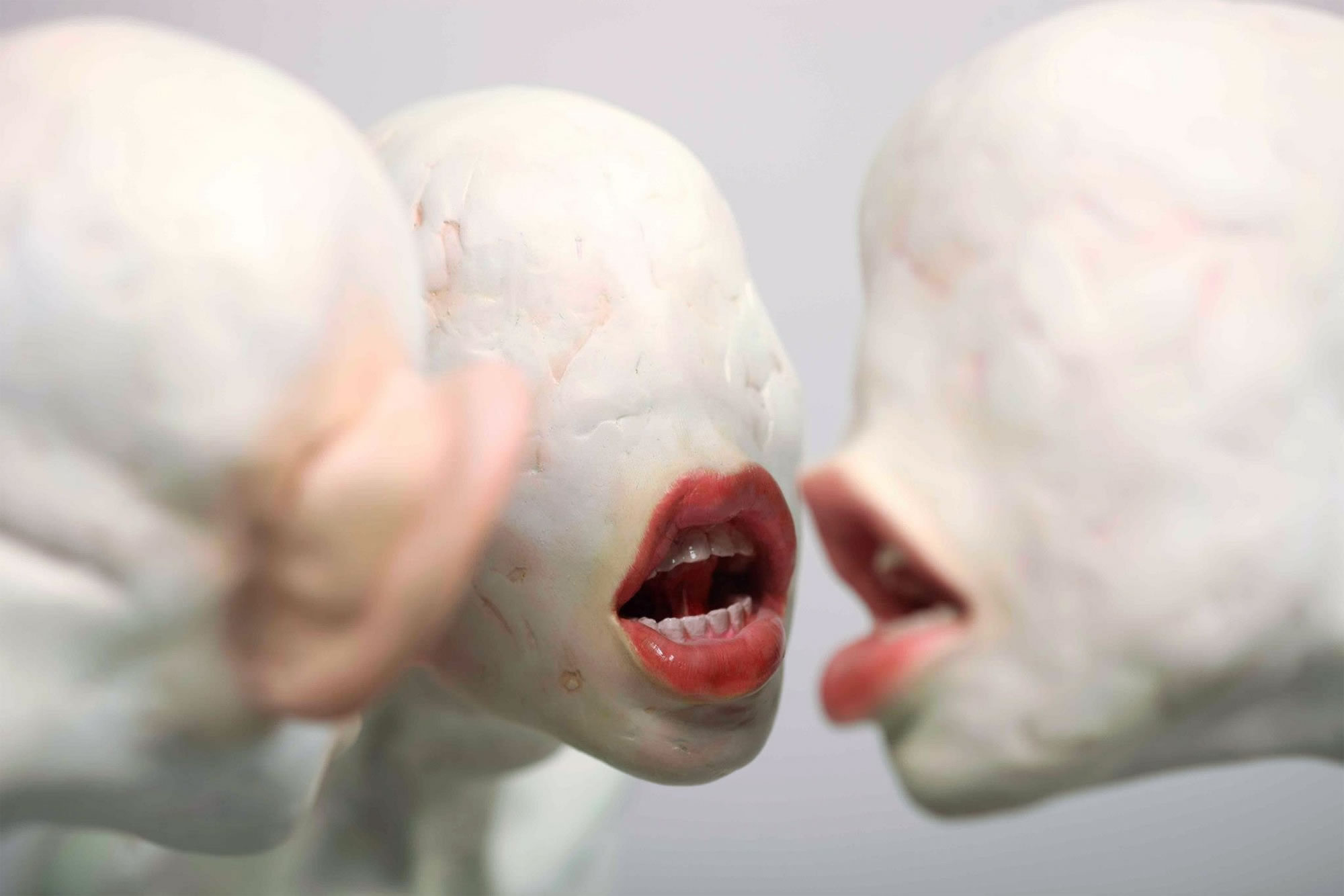 We humans really like to explore our own biology. And the biology of animals. And even the biology of beings that don’t actually exist, but somehow always manages to be very similar to ours. When the exploration is done in the name of science, knowledge emerges.

When biological exploration is done as an expression of the artistic impulse, anything can happen‚Äîfrom hyperreal body parts to playful absurdity to digital fabrication. In expanding the limits of science, art allows as many interpretations of anatomy as there are artists to imagine them. Here are 10 wildly reimagined versions of familiar anatomical structures. 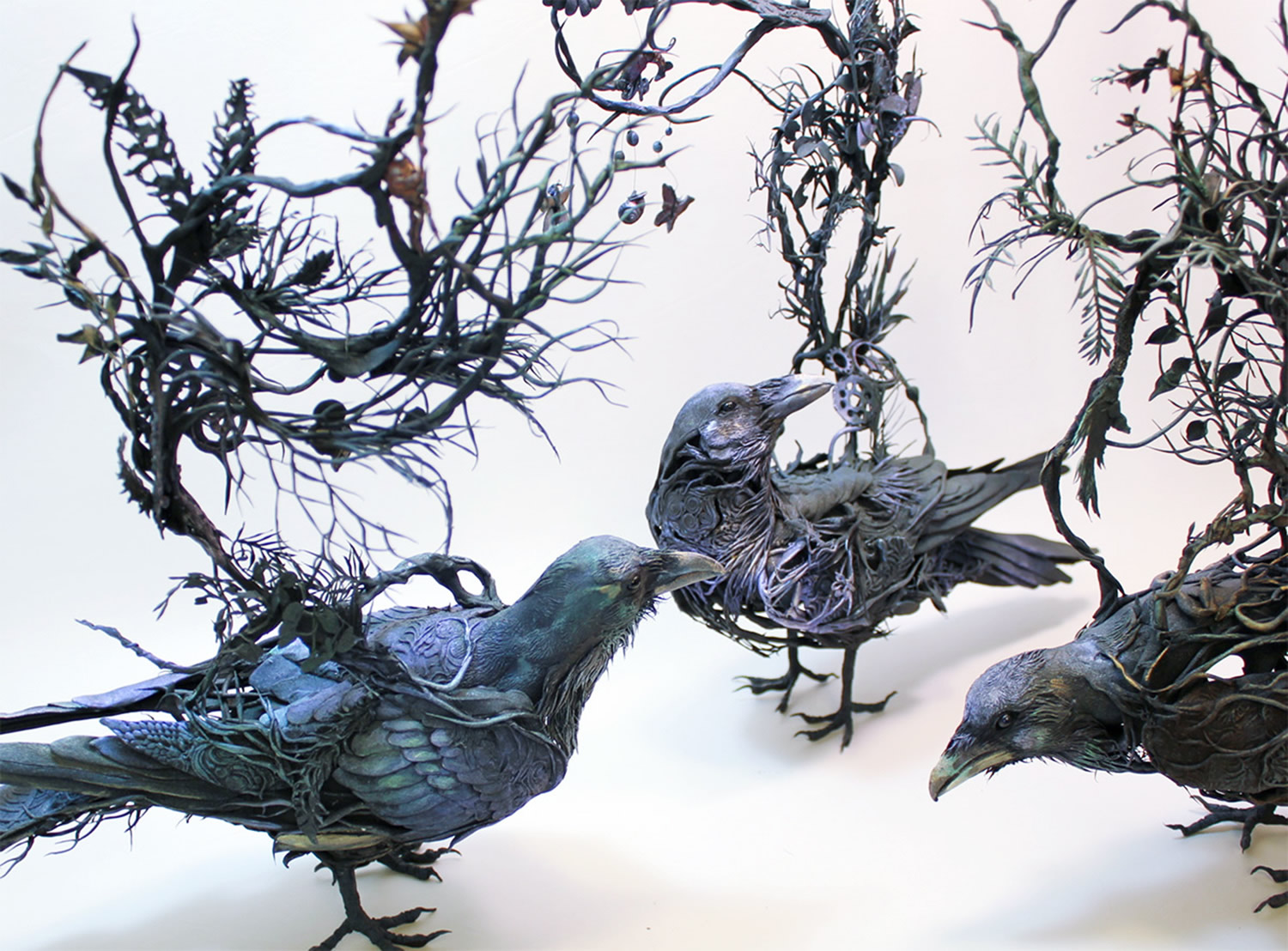 Corvids I, III, and III (2014). The corvid family of birds, which includes crows, jays, magpies, and ravens, are among the most intelligent of animals.

In the world of Ellen Jewett‚Äôs sculptures, woodland and farmyard animals, sea creatures, and many species of birds coexist peacefully alongside larger beasts‚Äîan elephant, a rhinoceros, a stag. These animals are perched on the edge of realism. They‚Äôre carefully rendered and clearly recognizable, but they‚Äôre decked out in fanciful filigreed fronds. Flowers sprout from bodies made of vines and branches and tendrils, where tiny birds and butterflies seem to happily dwell. Each one is unique and painstakingly constructed of nontoxic materials, to reflect this Canadian artist‚Äôs respect for the complexity of nature. 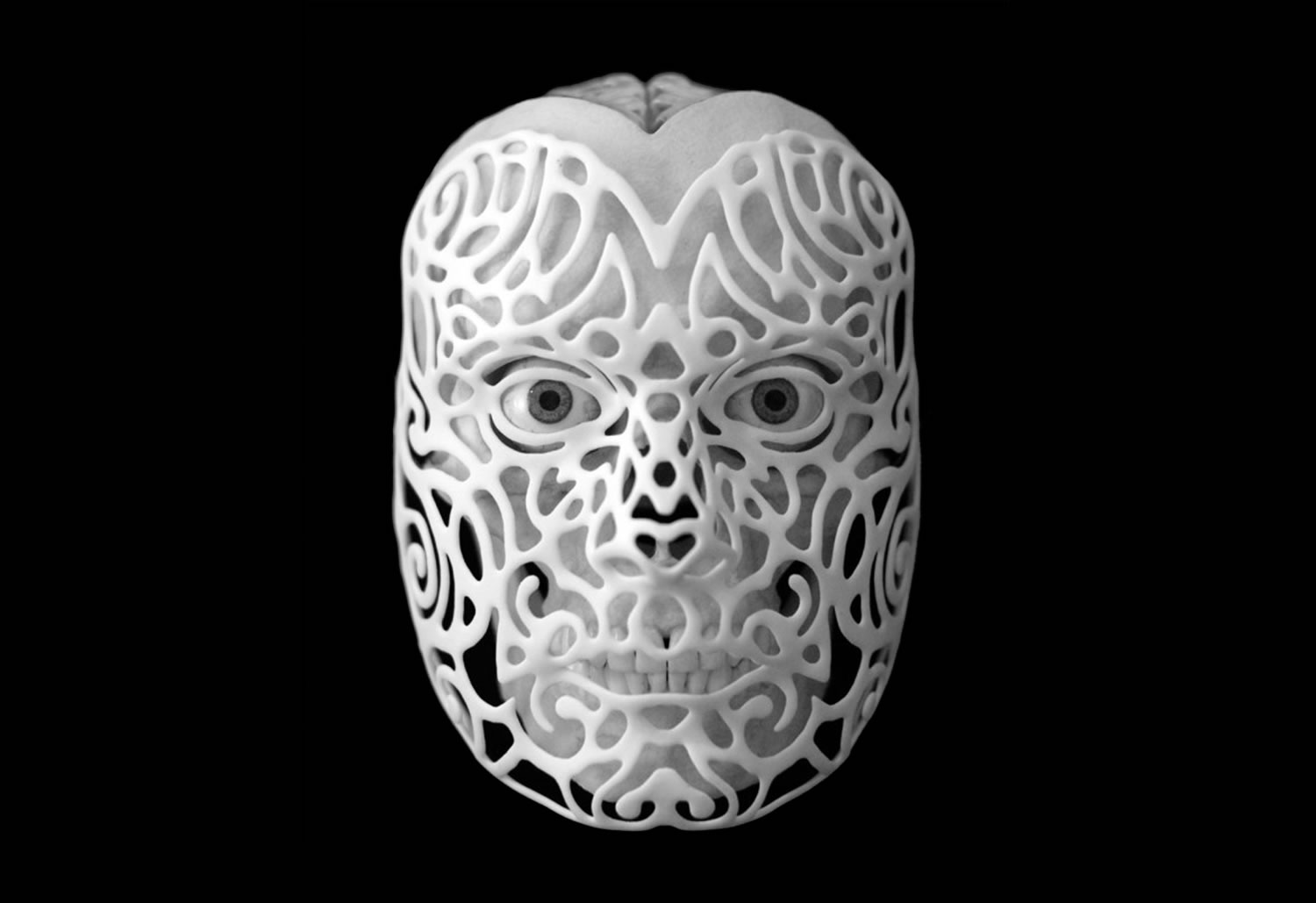 “20th Century Self-Portrait” (2014) was fabricated based on a 3D scan of the artist’s face and a CT scan of his skull.

Joshua Harker is an American artist whose approach combines traditional expression with cutting-edge technology. The tools and processes he uses include computer software, materials engineering, and 3D printing. His work pushes the boundaries of what‚Äôs possible, and he constructs complex objects that had been considered ‚Äúunmakeable,‚Äù because they previously existed only in what he calls ‚Äúthe architecture of the imagination.‚Äù Computer technology allows for absolute precision and symmetry in the execution of delicately embellished skulls, and of ‚ÄúTangles,‚Äù suggesting elaborate organic structures. 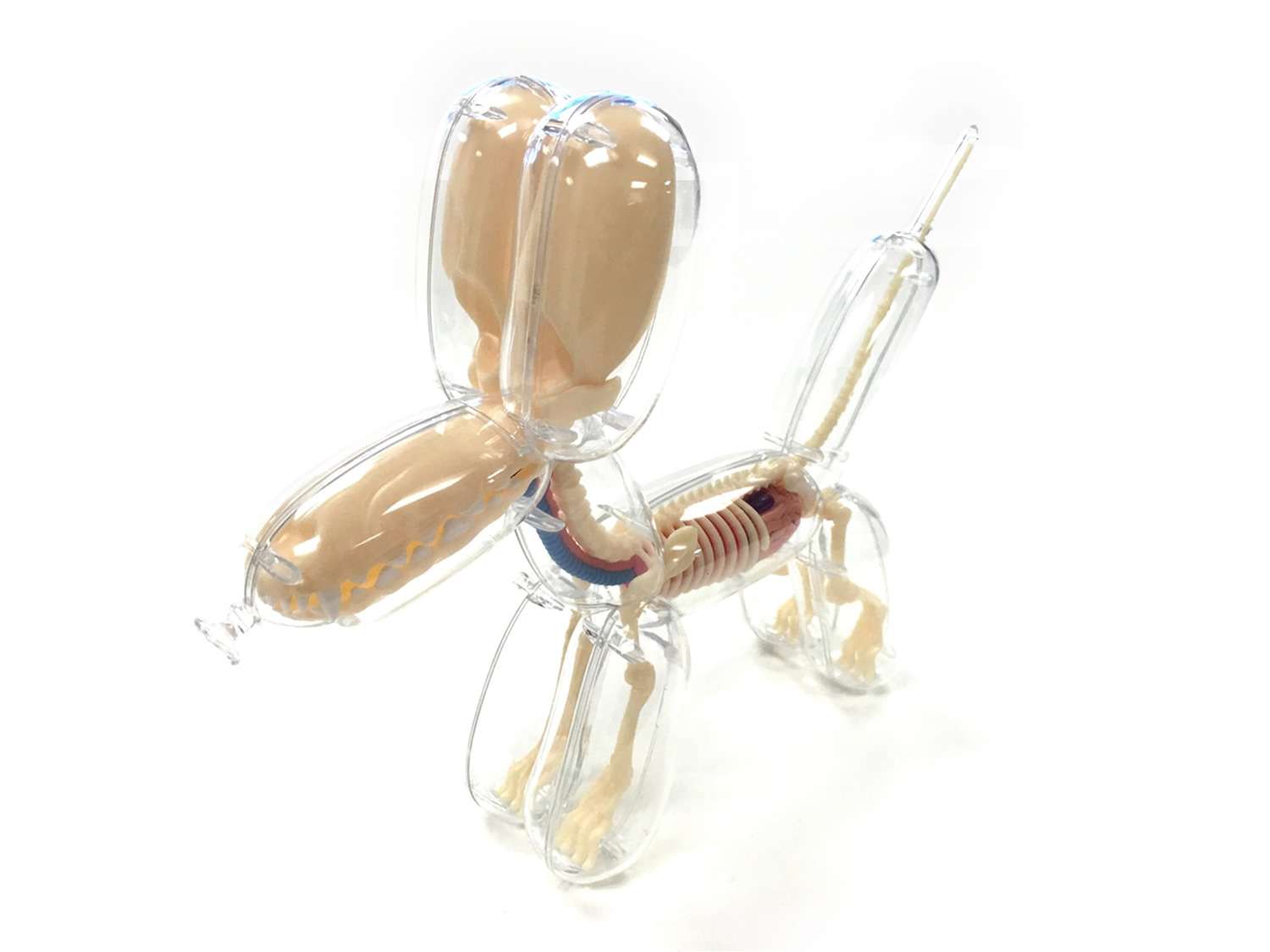 With a background in industrial and theatrical design, having created sets, props, and artwork for MTV and worked as a toy designer, Jason Freeny, an American artist, brings whimsy and technical expertise to his anatomical sculptures. He‚Äôs created cutaway models of Hello Kitty, a Kewpie doll, Barbie, and other toys, showing their innards in a way that‚Äôs sort of playful and sort of creepy at the same time. He‚Äôs made prints showing imagined yet true-to-life dissections of a gingerbread man and a gummy bear. It‚Äôs as if he‚Äôs looking at things through the lens of a cartoon X-ray machine. 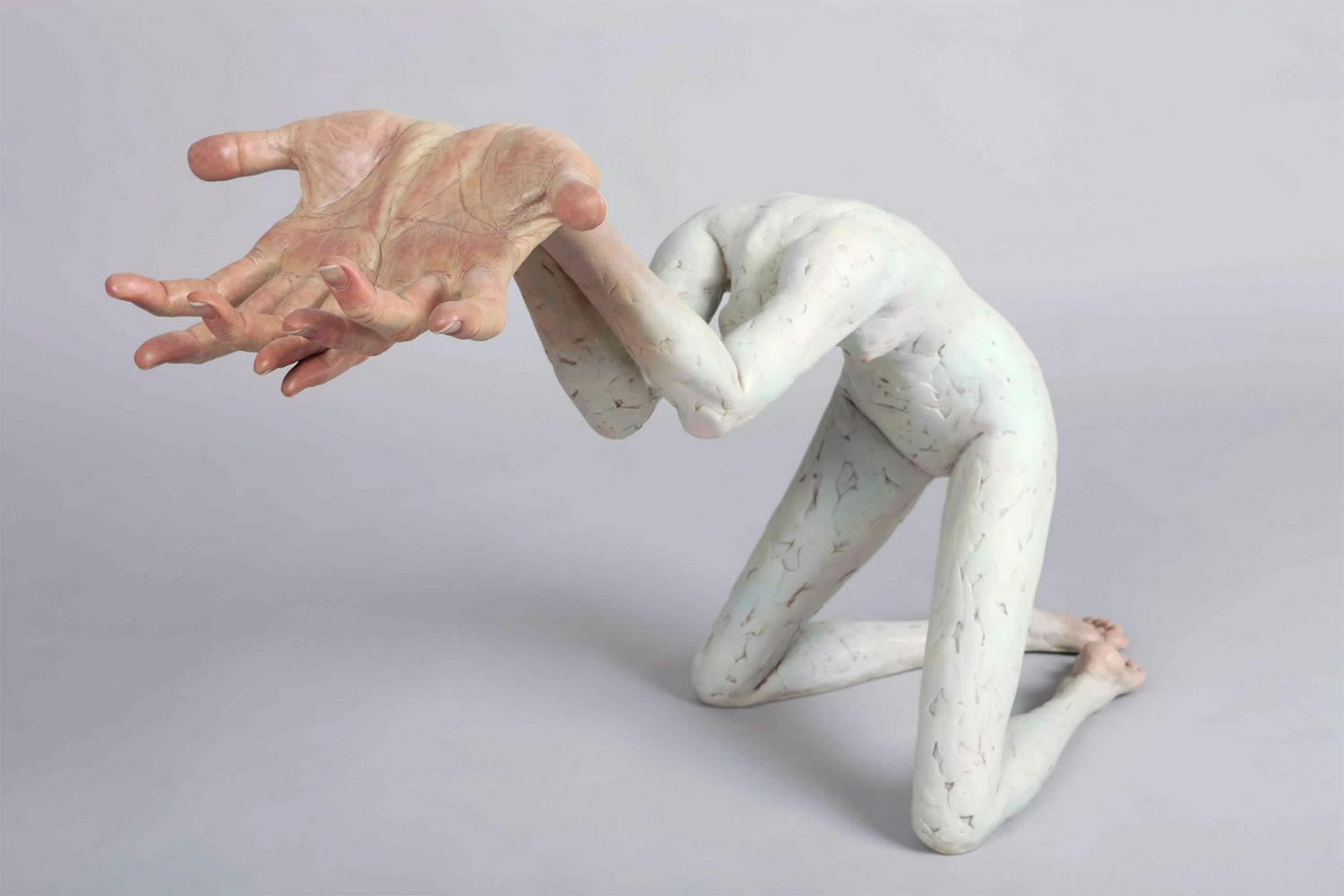 “The Islet of Asperger Type IV” (2009) reaches out in a silent scream of despair.

There‚Äôs an unsettling quality in the work of the Korean artist Xooang Choi. His pale, chalky human forms can have missing or exaggerated or multiplied parts, and they all seem to be pleading, desperate, needy. Many stand mouthless and mute, expressing a deeply relatable frustration. Even the fully realized flesh-colored forms seem distressed, as if caught in an embarrassing or difficult moment. These sculptures are much smaller than life-size, but their impact is huge. 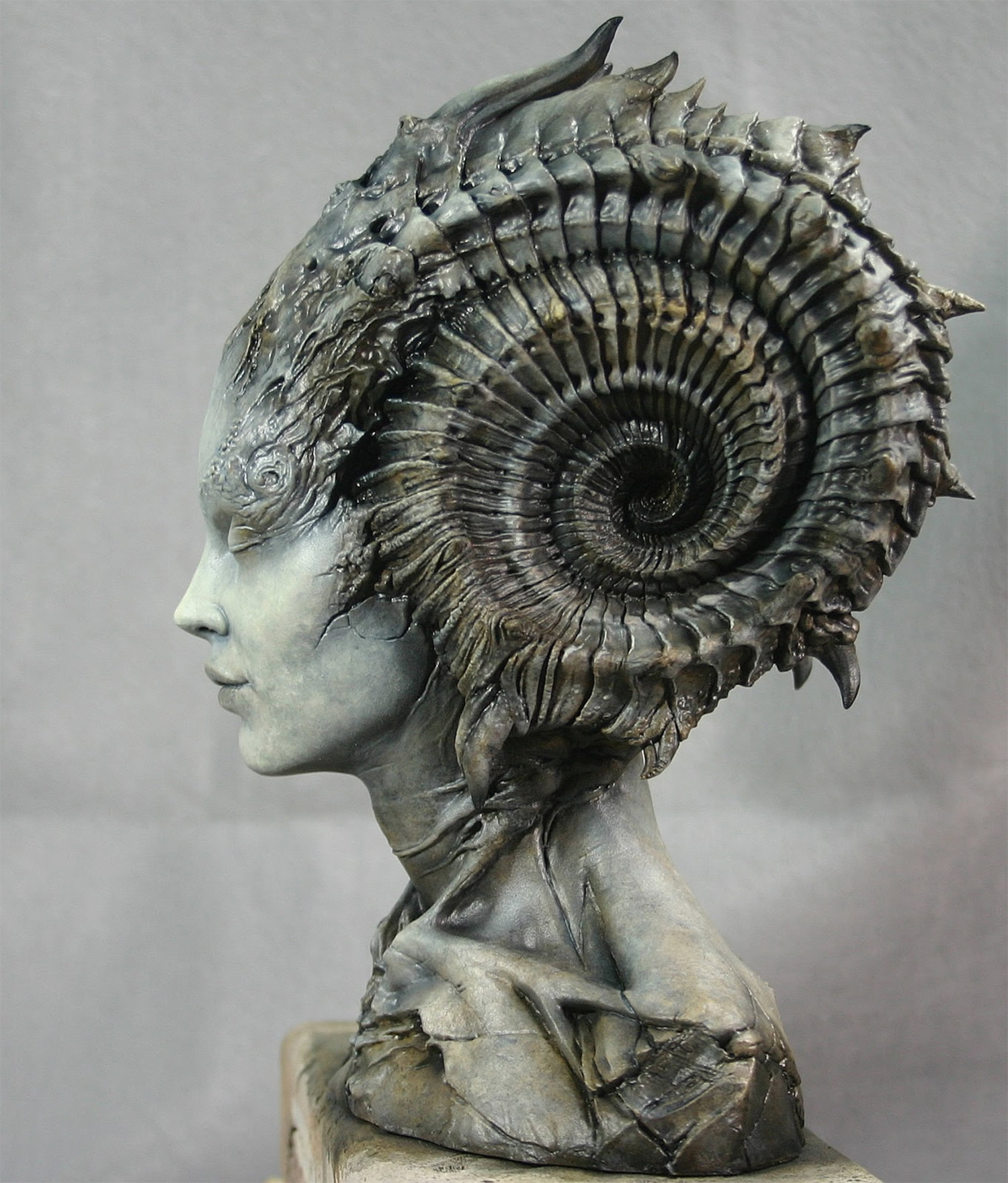 Caracolilla embodies the mix of imagination and technology: a 3D resin printed portrait, digitally rendered in ZBrush, of a fantasy being. (Painted by and photo ¬© Jason Tarpley.)

In science fiction movies, it‚Äôs no surprise that alien life forms often have humanoid features. The characters Abner Marin has worked on for movies like ‚ÄúGuardians of the Galaxy‚Äù and ‚ÄúPrometheus‚Äù exemplify this blending of real and imaginary. Marin, a Spanish artist with years of experience in digital 3D modeling, gives some of his creations substance by translating them from screen pixels to solid resin with 3D printing. 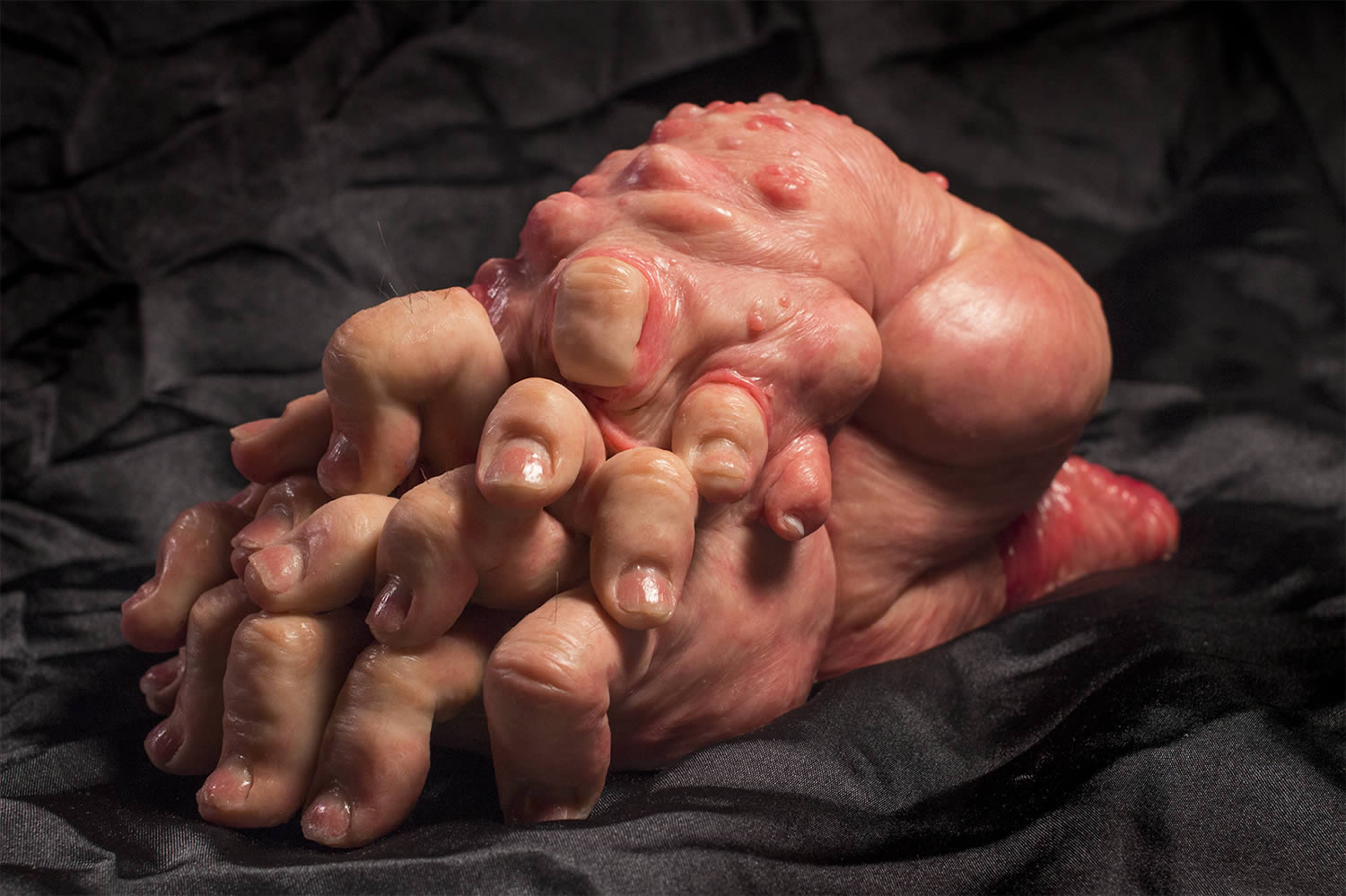 Among a series of similarly off-putting fleshy objects with feminine names, this one’s called Portia.

Jonathan Payne makes creepy, cringe-inducing creations that command attention. There‚Äôs no holding back on the ick factor with these monstrosities. And in his most recent series, ‚ÄúFleshlettes,‚Äù this California artist takes things to a new level of creepiness. Body parts‚Äîhands, mouths, teeth, other bits not easily identifiable‚Äîare combined with bristly hairs and weird tumor-like growths and excess pieces of flesh, all garishly flesh-colored, to create lumpy, grotesque forms that elicit pure disgust. We‚Äôre grossed out, but we can‚Äôt stop looking. 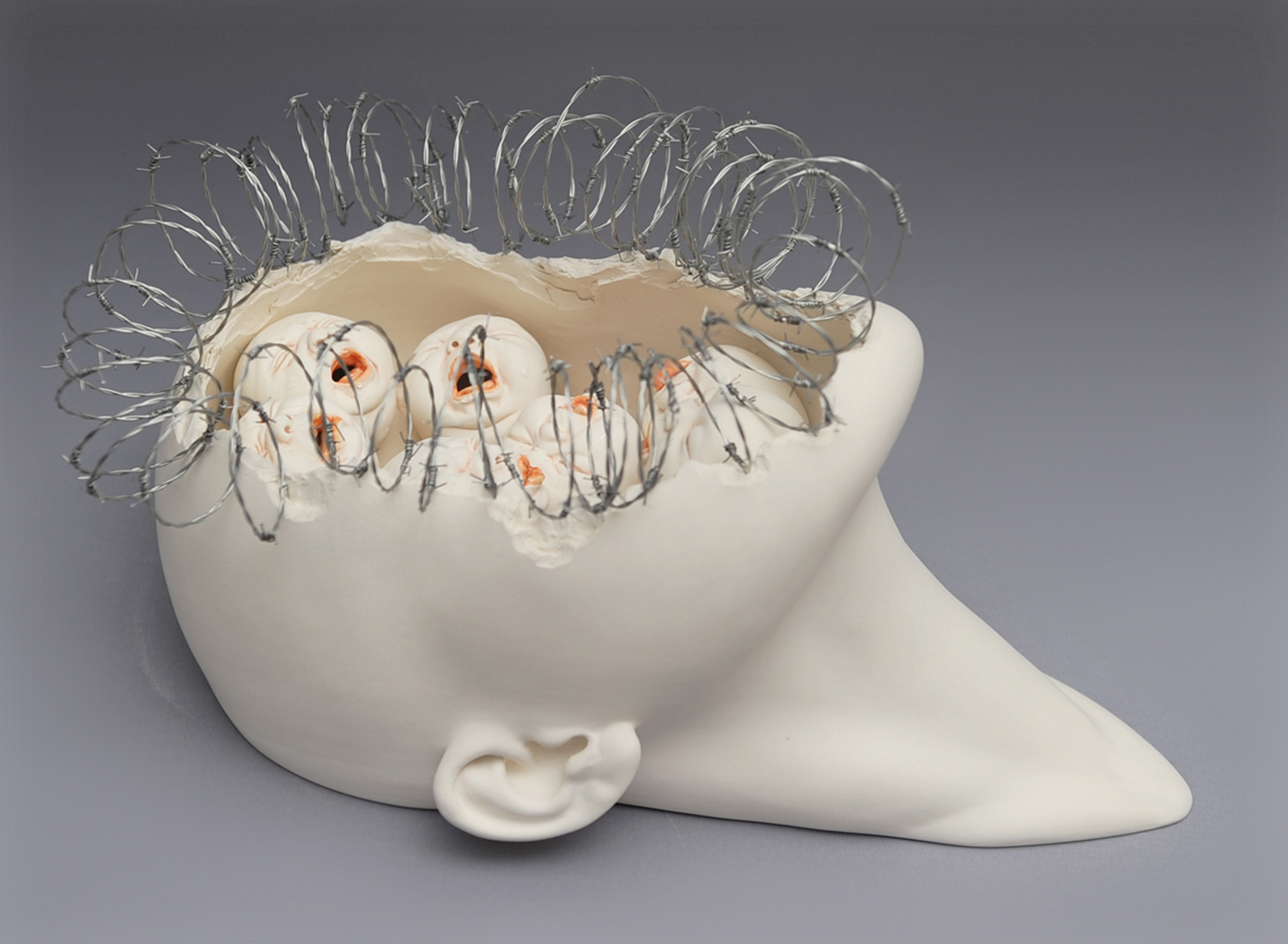 Unlike many of Tsang’s jollier babies, these are decidedly unhappy. “Behind the Wall” (2015).

Expressive porcelain babies frolic and cavort throughout Johnson Tsang‚Äôs body of work. Their endearing chubby-cheeked faces, with lips adorably pursed or pouting, are instantly engaging, whether they‚Äôre laughing or crying. Adult-sized heads also appear, pristine but mutilated somehow, broken or squished or splashing out. Tsang, based in Hong Kong, also creates traditional-looking bowls and dishes that seem to be partially liquefied, captured in the moment before splattering everywhere. 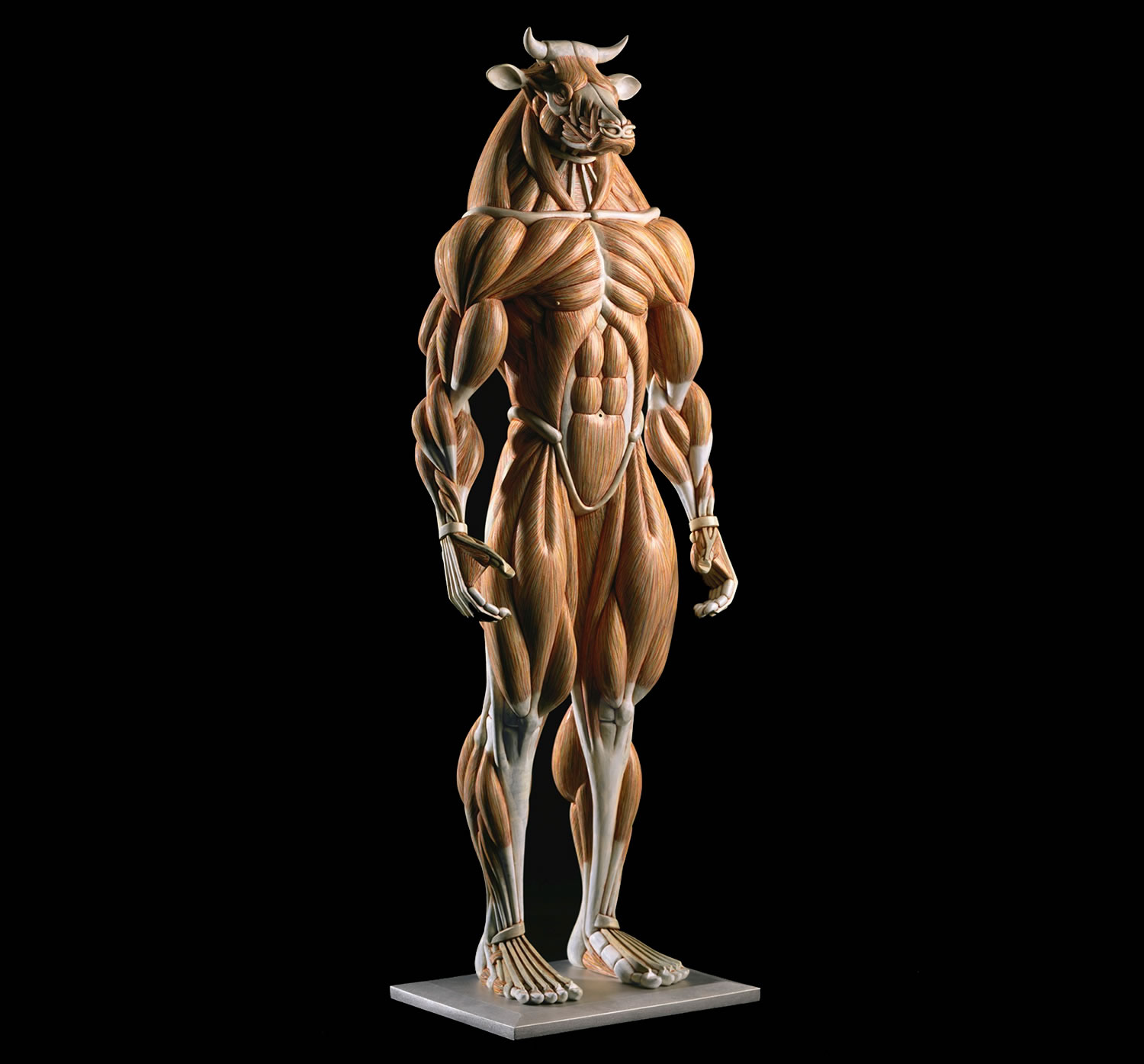 The Minotaur, a character in Greek mythology who had the head of a bull and the body of a man.

Applying an anthropomorphic perspective, Masao Kinoshita shows what he imagines exists under the skin of mythical beings. He gives a Greek maenad and the Hindu god Ganesha and other figures human-like musculature and skeletal structure. They feel familiar, yet alien; wholly possible, yet jarringly abnormal. This Japanese artist also has a series of gracefully posing multi-armed yoga asuras‚Äîsuperhuman beings in Hindu mythology with benevolent or malevolent powers‚Äîalso very human and yet impossibly not. 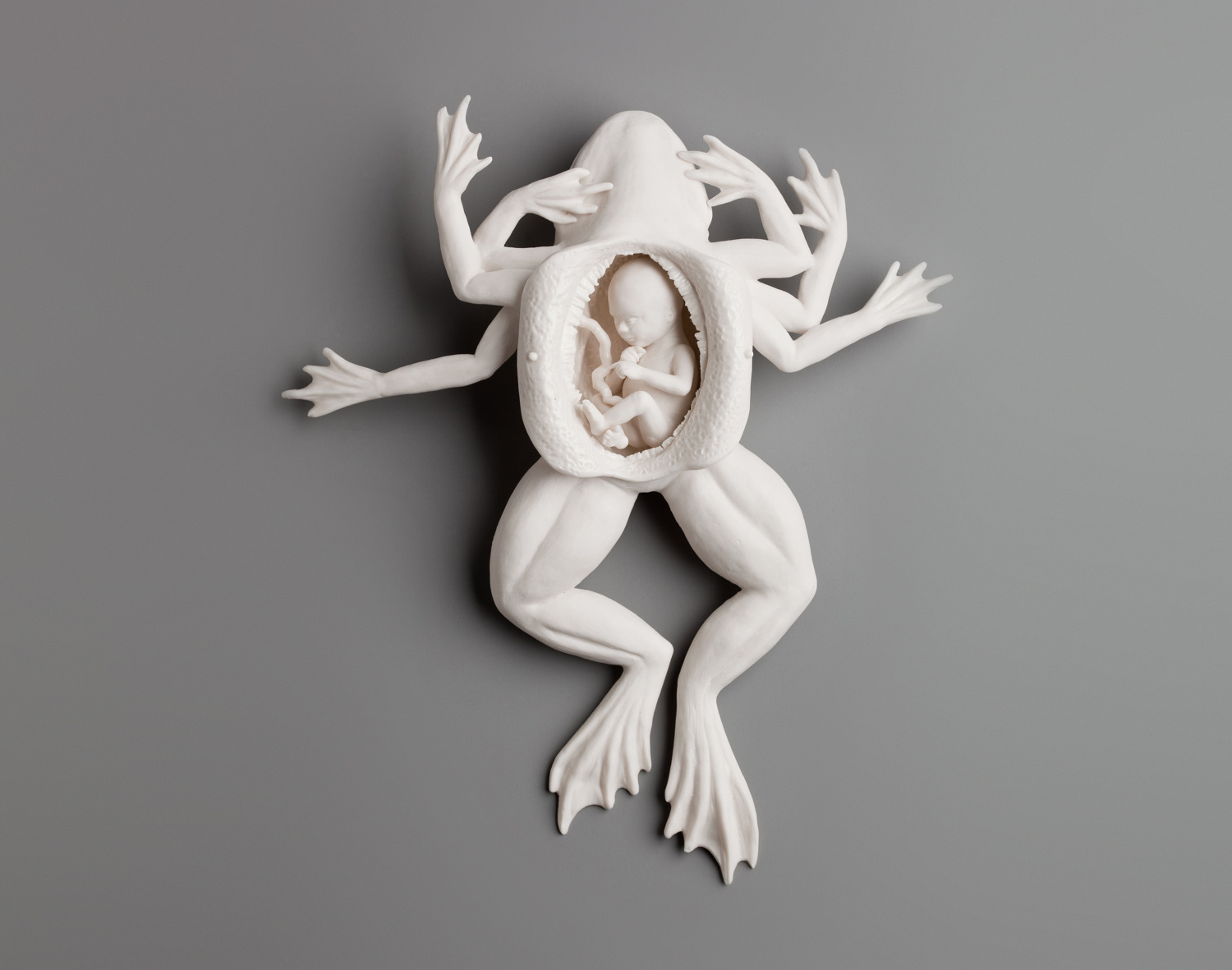 Kate MacDowell, an American artist, brings a sense of the surreal to her porcelain body parts and animal dissections. She combines components that don‚Äôt belong together in a way that seems perfectly natural. The pure white of the translucent material gives the pieces a bleached-out clinical look, highlighting the realistic details. Much of the work reflects MacDowell‚Äôs concerns about the impact of human-engineered technology on the natural world and the way art can express conflict and dismay‚Äîa quality noticed by Banksy, who included work by MacDowell in his ‚ÄúDismaland‚Äù exhibit. 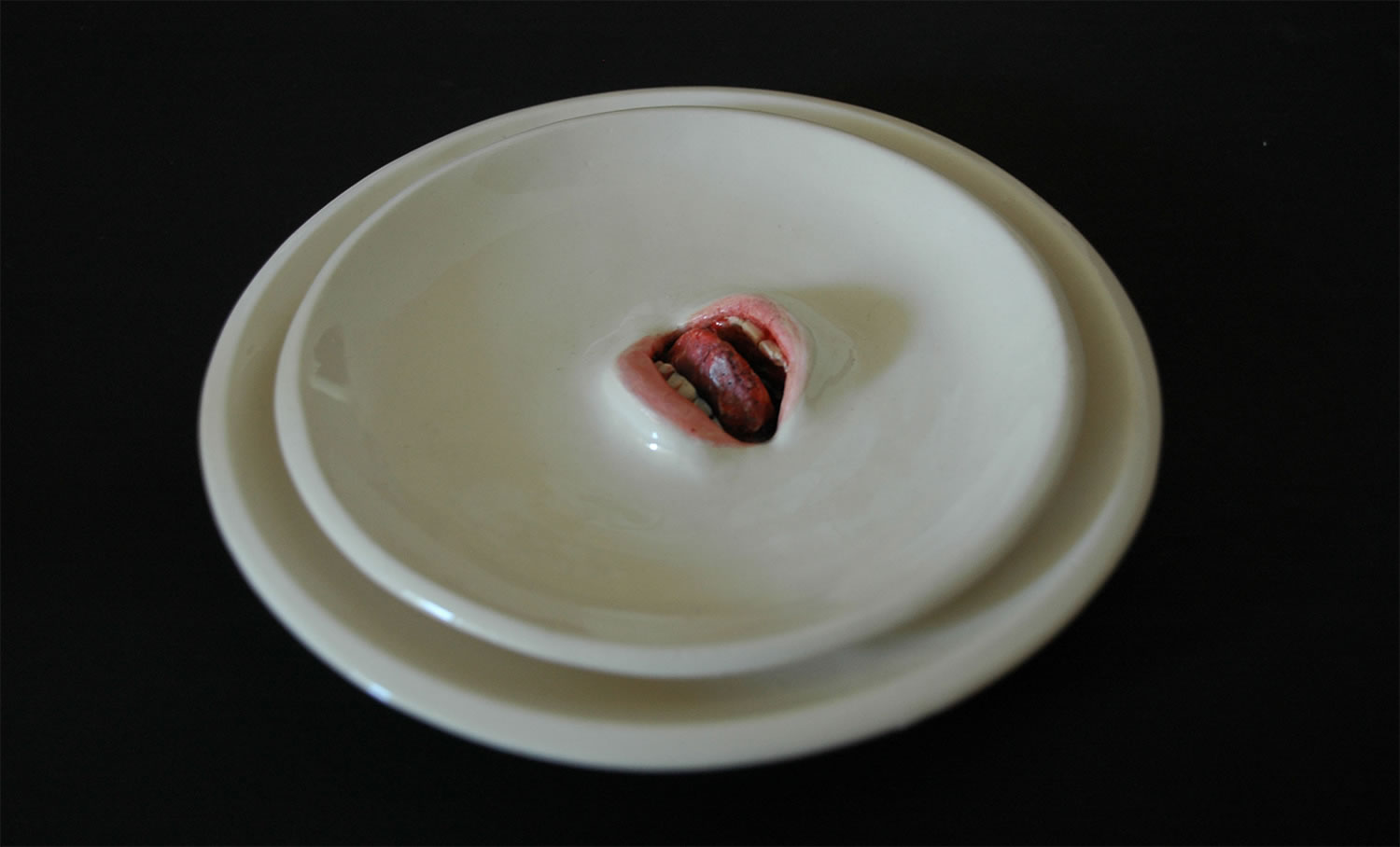 From “Self-Feeding” (2012), a set of 12 dishes, some with hands to feed the mouths‚Äîor to prevent them from eating.

Protruding fingers and mouths add motion and urgency to Ronit Baranga‚Äôs “Untitled Feast,” a collection of otherwise ordinary ceramic tableware. Cups and vessels seem to walk across the table; plates and bowls yearn with hunger. At ‚ÄúDismaland,‚Äù the complete set sat on a huge wooden dining table in a circus tent, surrounded by an assortment of creatures by other artists. Based in Israel, Baranga has a vast body of evocative work.