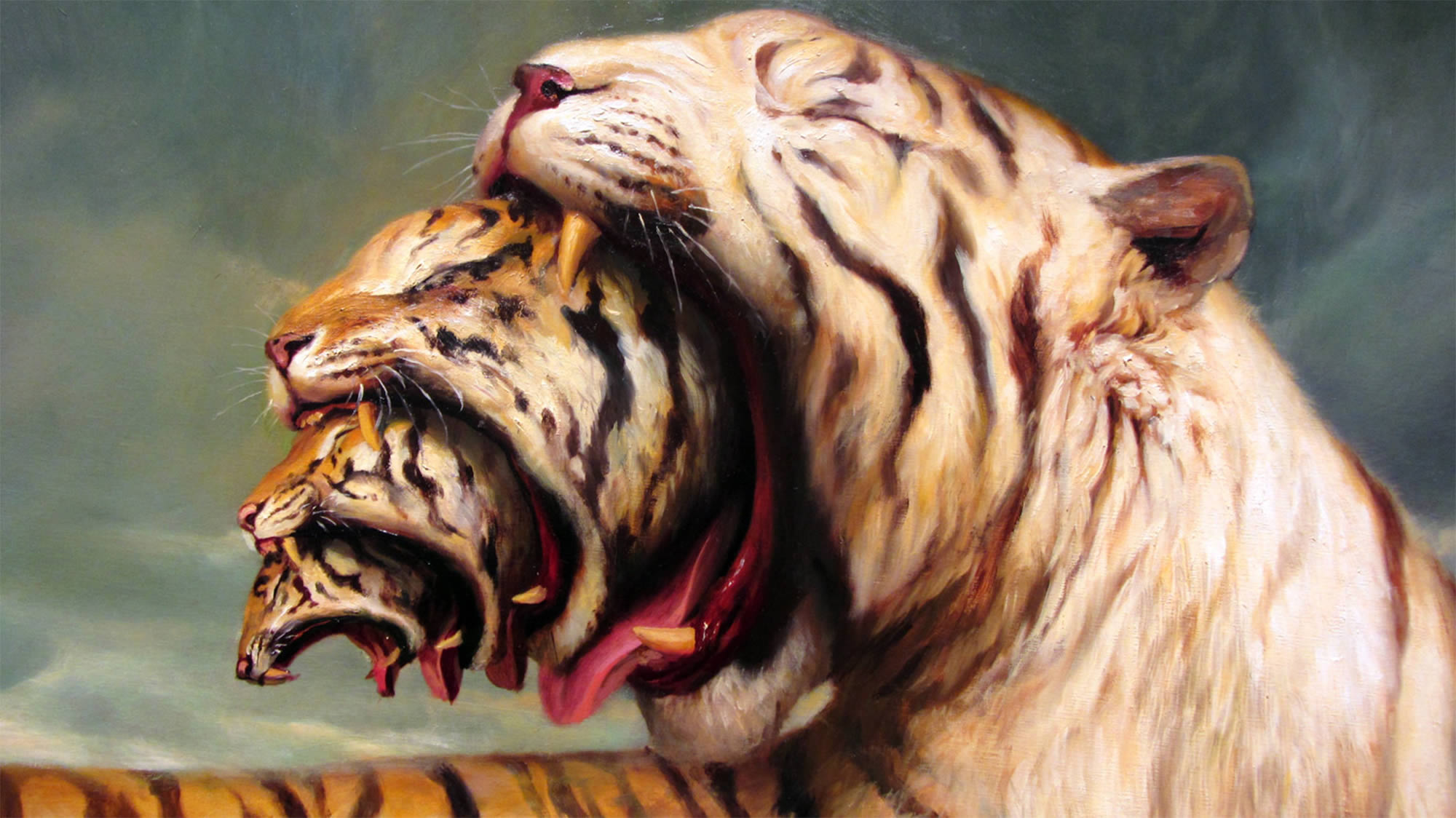 Look at any piece of art and right away an opinion forms, a feeling happens. Sometimes it’s obvious with just one look what we’re seeing and why we’re feeling a certain way. Sometimes it takes longer, we have to linger and keep looking to find out what and why. And if we do, we’ll discover hidden aspects of the art that we would have missed in just a glance.

Above, detail of “Golod” by Martin Wittfooth 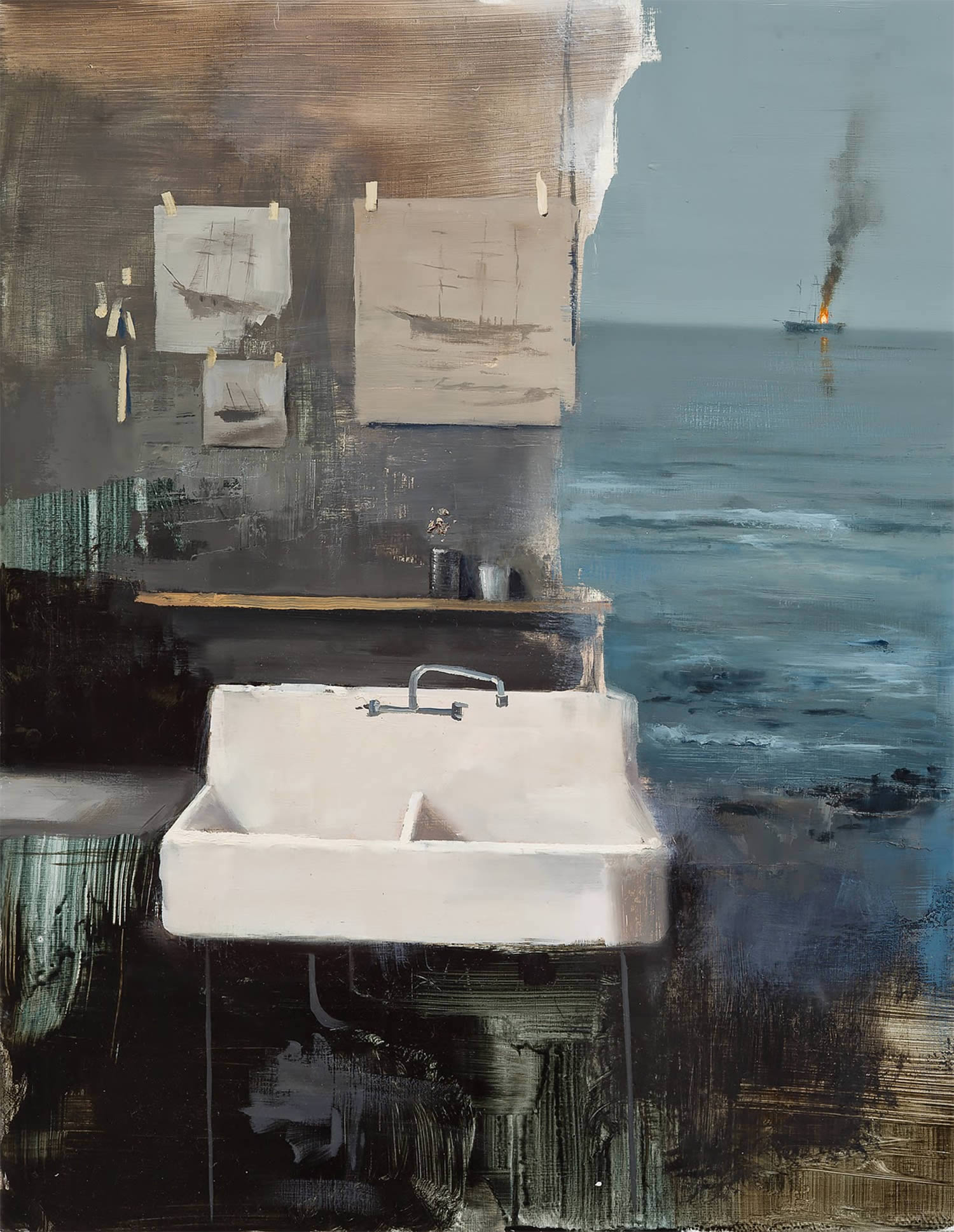 In small, intimate paintings like “Recording” (undated), the artist blends inside and outside, present and past, reality and memory. It’s not always clear which is which.

What does it mean to be two places at once? Jeremy Miranda likes to think that āwherever you are, youāre always occupying two spacesāyour immediate surroundings, or the present, and the space in your thoughts, the past.ā[1] In the real world, only one of those is visible. In the world of Mirandaās paintings, memory is revealed to coexist seamlessly with present reality. But wait, is the room a memory within the landscape, or is the landscape a memory within the room? Thatās a secret the artist isnāt telling. 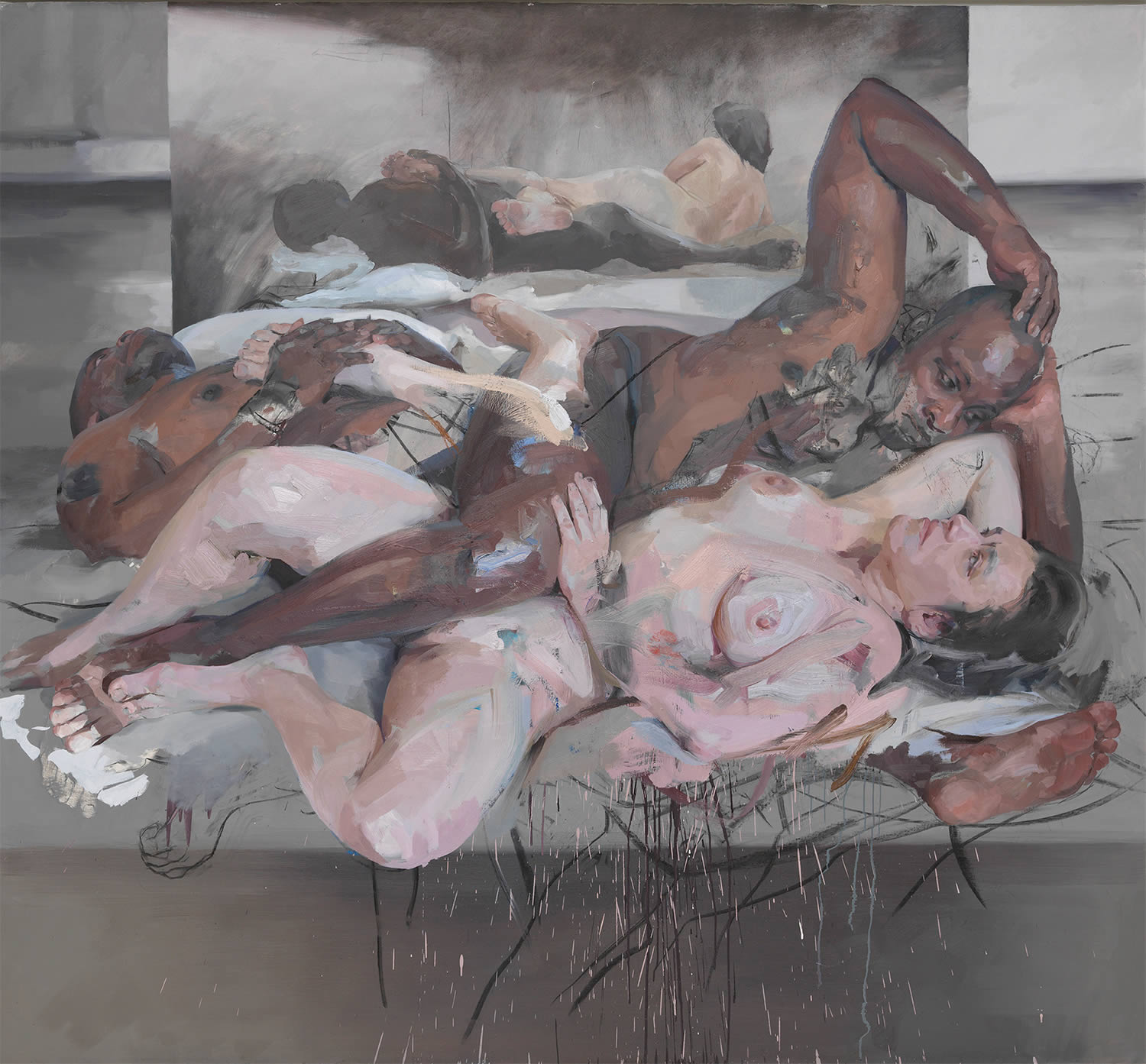 “Odalisque” (2014) doesn’t depict a moment in time, but reveals the passage of time in the shifting of bodies and the trails of unfinished lines.

āFlesh is just the most beautiful thing to paint,ā Jenny Saville says,[2] and her work is indeed one big showcase of voluptuous, vulnerable human flesh. The formality of her figurative paintings would have you believe that Saville means to leave it at that: a stunning panorama of naked bodies. But what makes flesh so imperfectly human is its flaws, and in these paintings the flaws are arrayed like a secret treasure map the artist creates to lead us across expanses of familiar, and sometimes not so familiar, territory. The effect can be staggering. 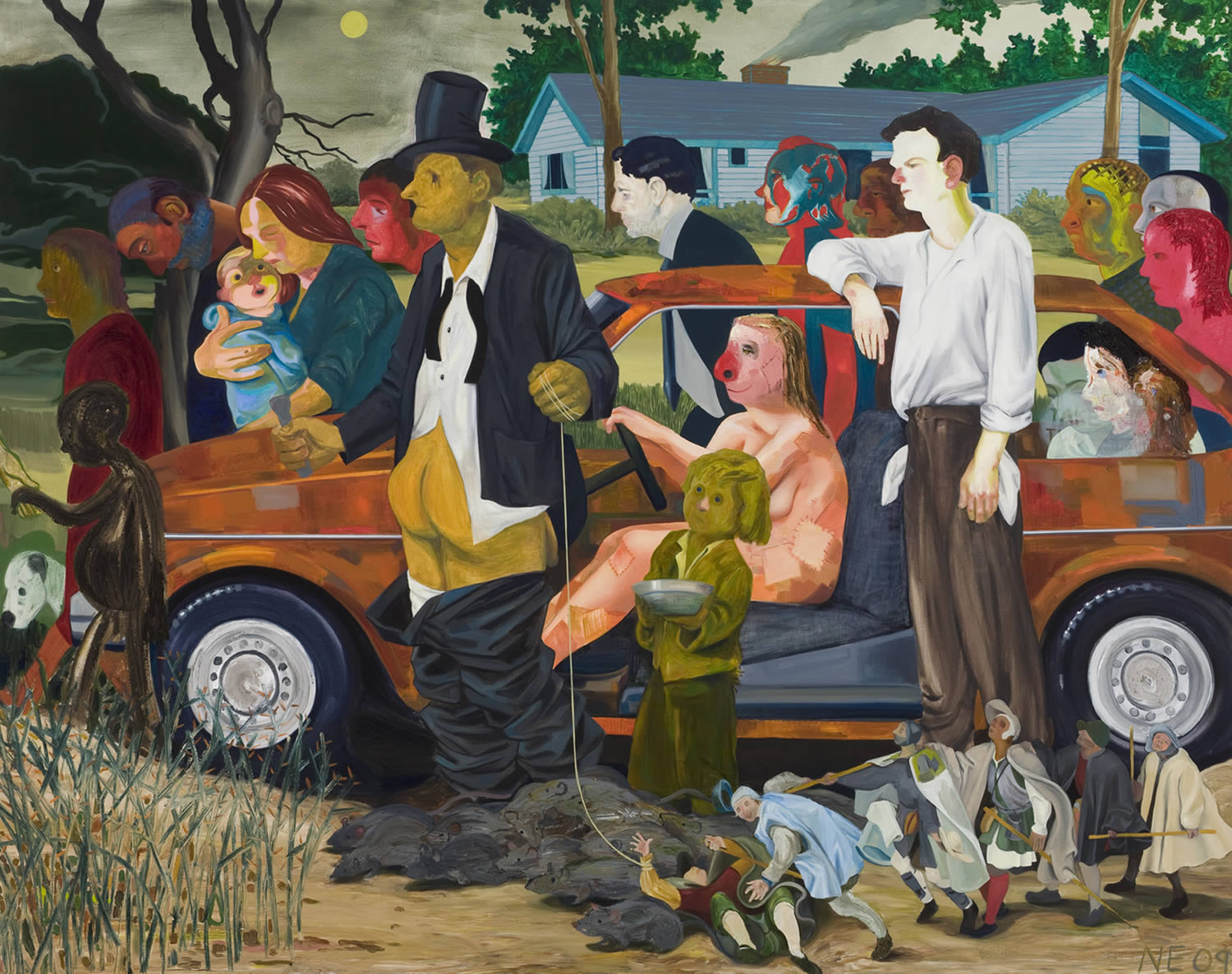 History repeating itself is a hidden element in “The Triumph of Poverty” (2009), echoing a work with the same title from 1600s Britain. This painting inspired a book of modern poetry.

Cartoony figures populate the paintings of Nicole Eisenman, suggesting fun, lighthearted whimsy. Theyāre colorful and garish, laughable caricatures, objects of ridicule. But whatās really going on? Why is there a naked woman at the dinner table? Who are those people in the beer garden? Pull away the scrim and gloss of modern culture and theyāre characters out of Munch and Breugel and Picasso. Theyāre not whimsical at all; theyāre tragic, displaying ugly, familiar human flaws. The narrative power and cultural significance of Eisenmanās paintings earned her a MacArthur genius grant. 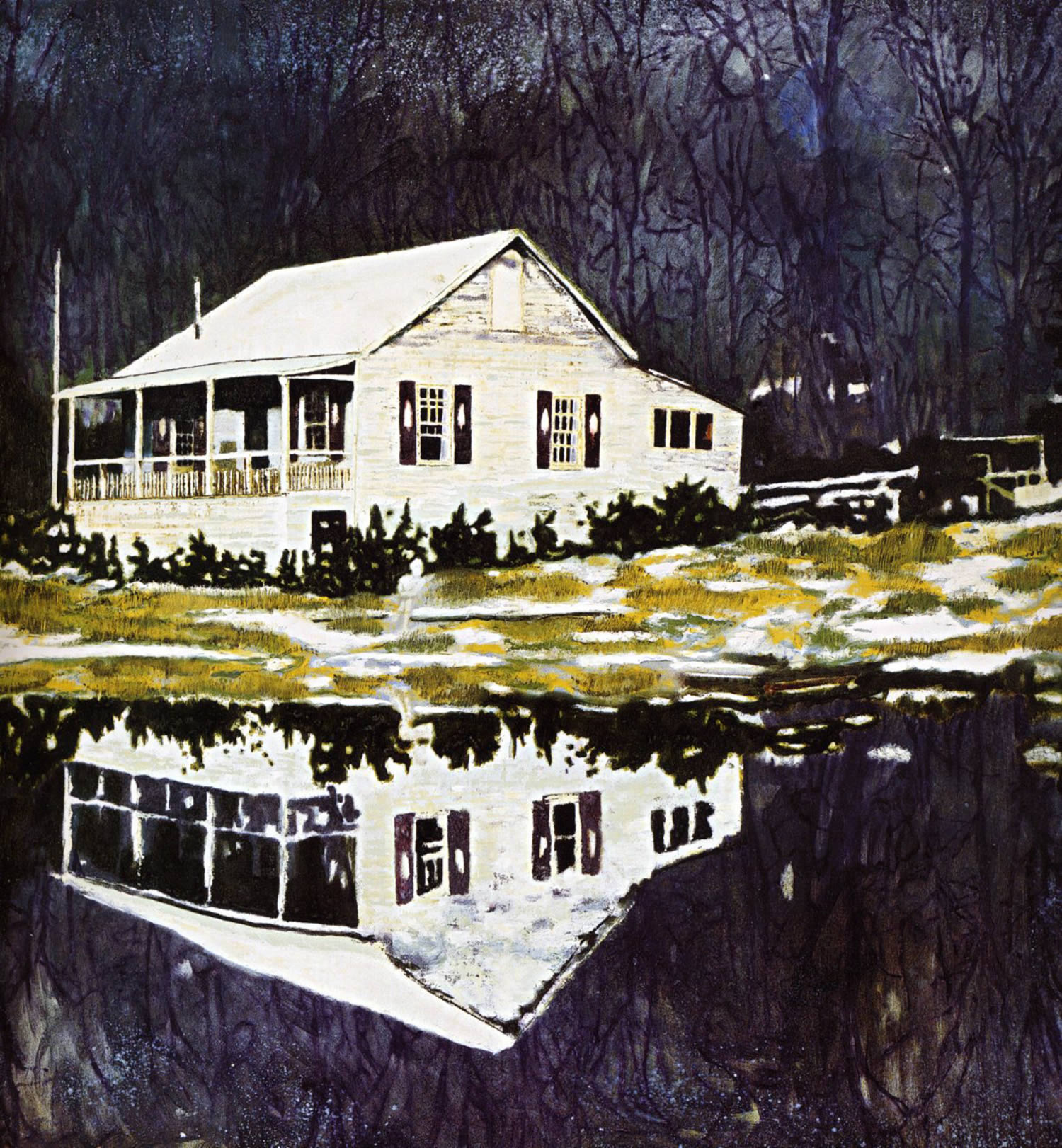 In “Camp Forestia” (1996), a cabin in the woods may look inviting, but its reflection in the lake is spooky and sinister. Maybe we don’t want to go there after all.

We donāt have to look very hard to find something hidden in a Peter Doig painting. In some of them, just about everything is hidden. In others, an inviting-looking landscape beckoning like the fantasy of your dreams isnāt so nice at all, itās spooky. In several, a plain, ordinary canoe is a cosmic vehicle in disguise: its āreflection in the water, like a double life, is a fantasy mirror to the unknown.ā[3] Doig can also pack layers of hidden meaning in a title, as in “Blotter,” referring to materials, process, and experience all at the same time. 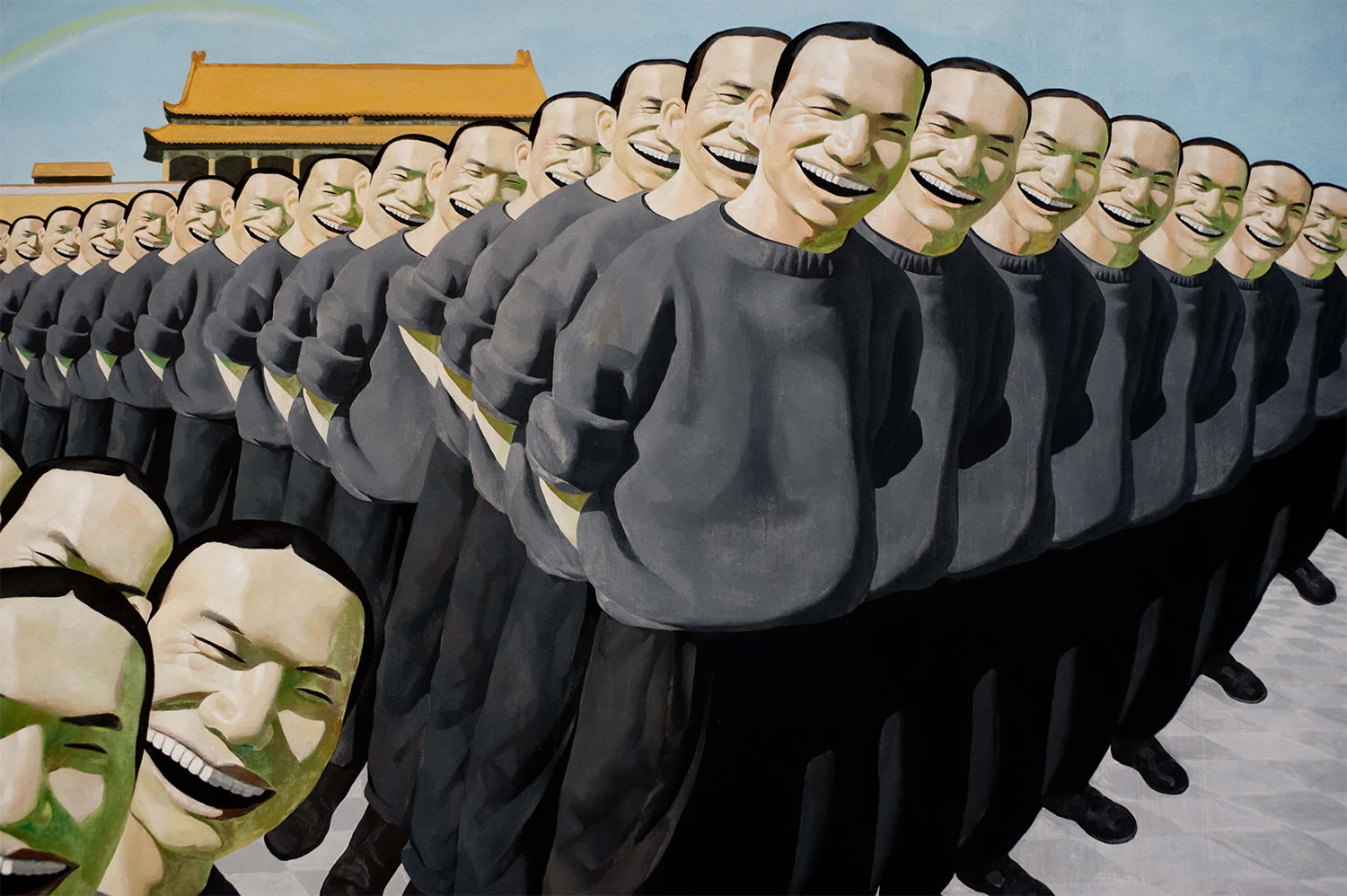 So many smiles! So much happy! Looking at a Yue Minjun painting, we canāt help but laugh along with the smiling menāor rather, many iterations of one man, Minjun himself. Theyāre like mirthful Buddhas, letting us in on a great cosmic joke. But there is no joke. Theyāre laughing in ridicule, mocking the totalitarianism of Communist China, the violence and bloodshed, the propaganda. Minjun is part of the Cynical Realism movement, an artistic response to shifting politics in China and the clash of communism with rapidly spreading commercialism. 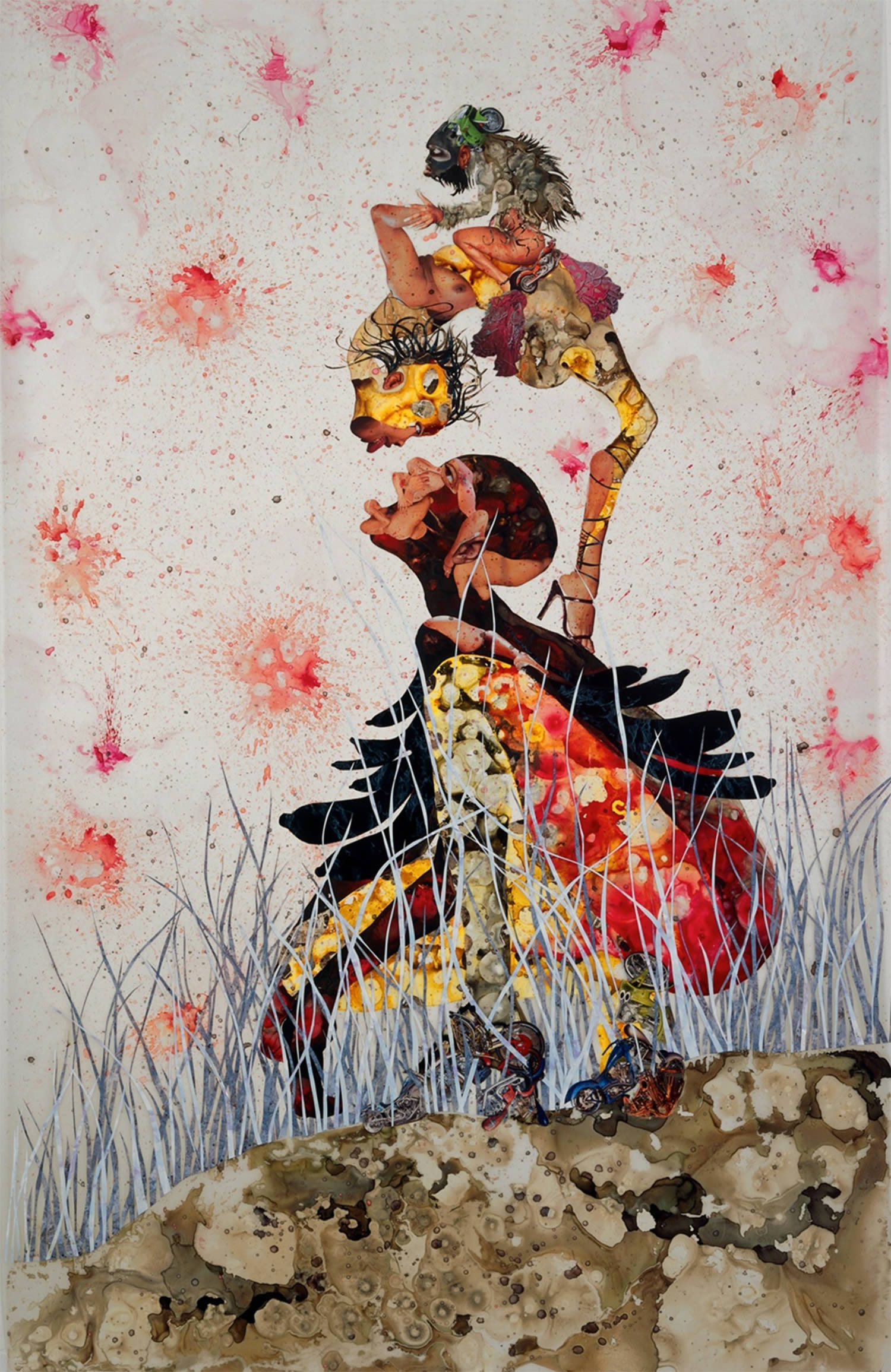 Everything means something in “Misguided Little Unforgivable Hierarchies” (2005), and nothing is what it seems.

Wangechi Mutu packs wallops of hidden meaning in her multilayered collages. Every carefully chosen elementāa Victorian medical illustration, a fashion magazine cutout, painted-on reptilian skin, the head of an eagleācarries significance in Mutuās well-curated artistic vocabulary. The resplendently fierce women she creates give voice to some of the artistās potent themes: cross-racialism, objectification of the female body, social injustice. Other works convey messages of overconsumption, racial identity, being other. 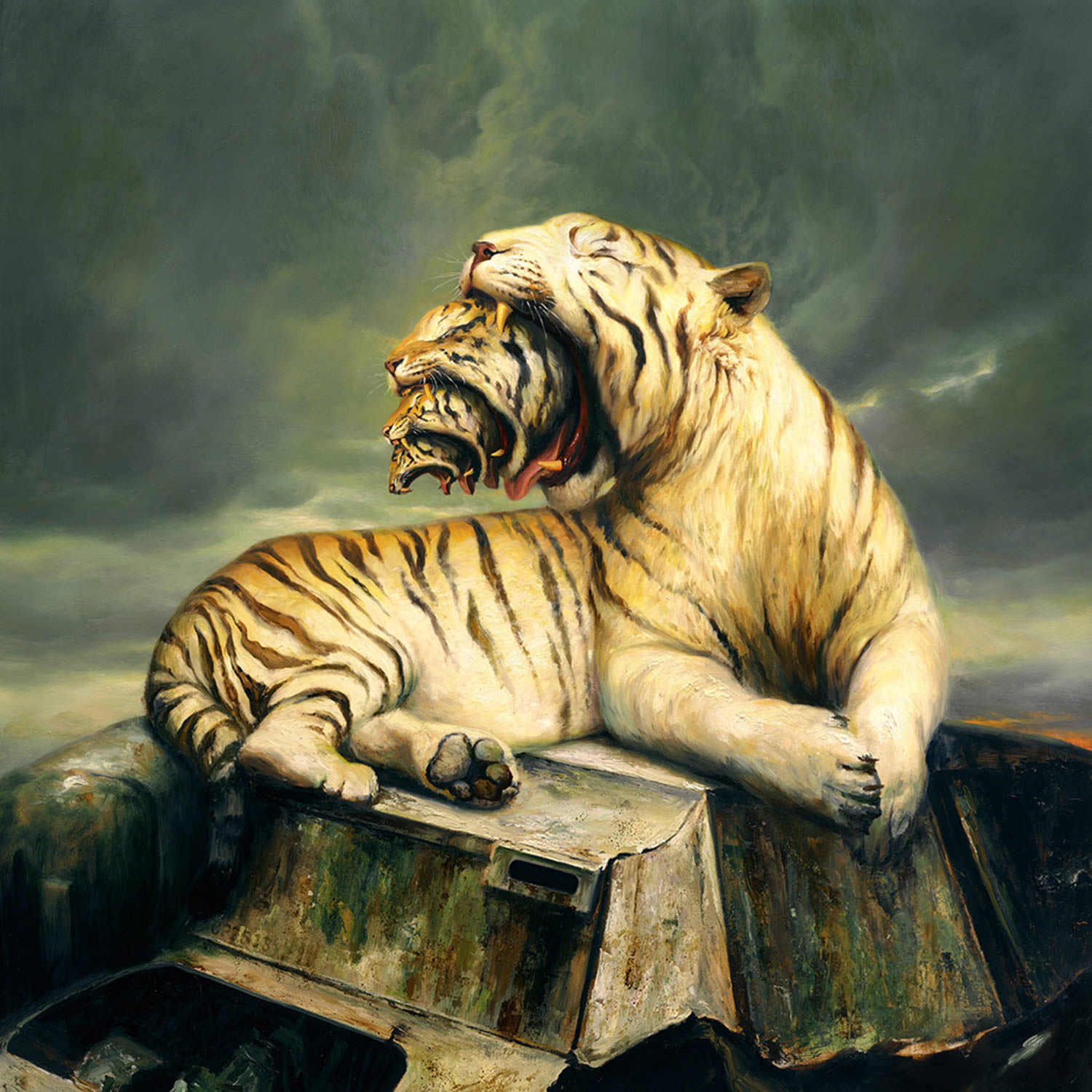 The industrial landscape is one clue to the hidden meanings in “Golod” (2012). When the natural world gets ruined, strange things happen to the animals.

Martin Wittfooth paints commanding portraits of majestic animals, gloriously detailed, true to life, so close you could reach out and touch them. Except their settings arenāt the natural National Geographic landscape youād expect. Thereās a rhinoceros resting near a submarine base. A huge horned bullĀ perched on a steel beam high above a city. A polar bear in a field of poppies, with a helicopter nearby. The animals are stand-ins for humans, existing in a man-made environment with no actual humans still around, and suffering the consequences of manās environmental manipulation.[4] Behind the pleasing image of a perfectly executed portrait lurks destruction and waste, disconnection and ruin. 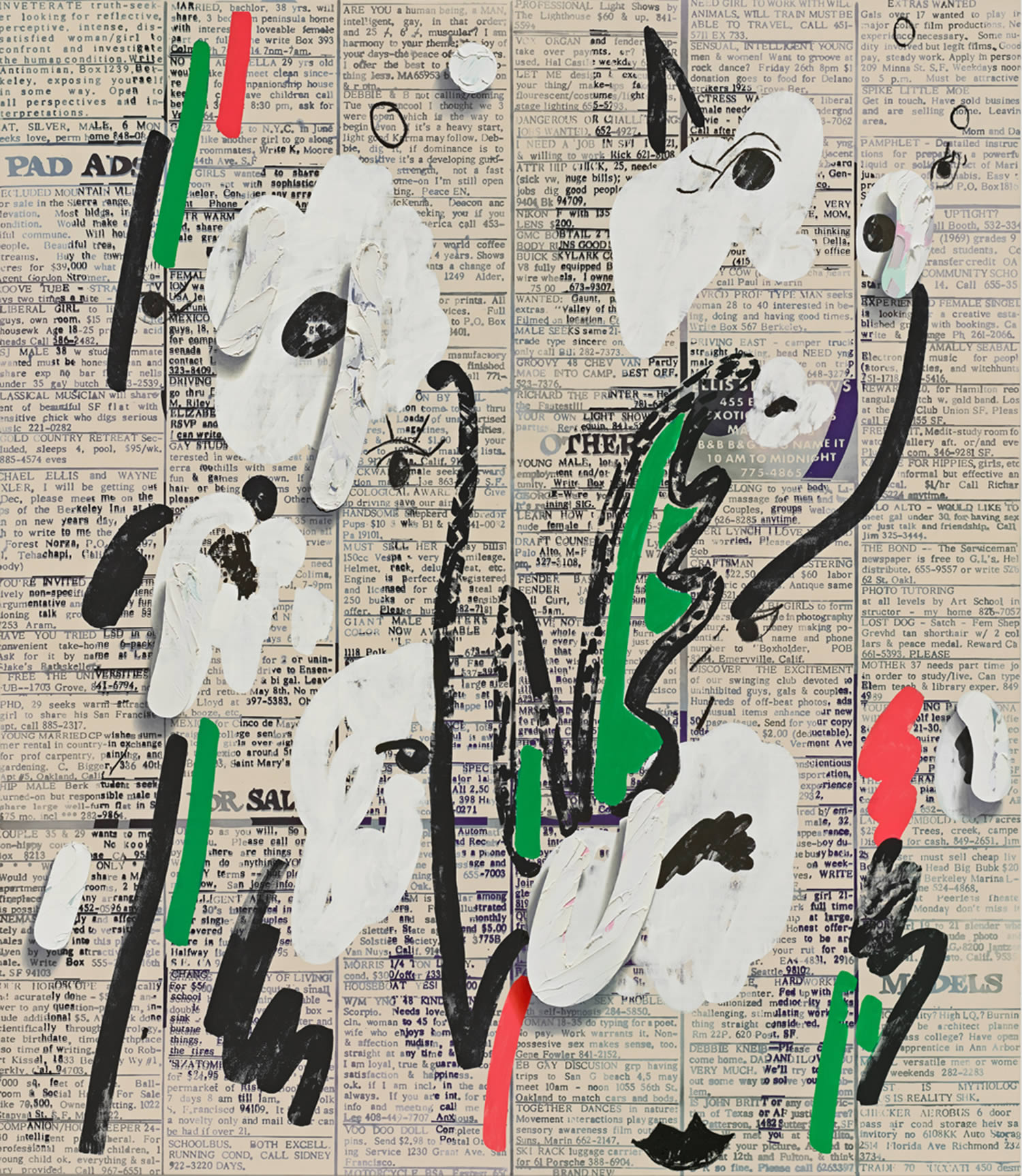 In “Untitled” (2013), a secret world exists in the dimensions beyond the surface of the painting, both inner and outer.

Donāt be fooled by the bright and cheerful, almost childlike splashes of color on Laura Owensās gigantic paintings. Thereās more than meets the eye here. Hiding behind that seemingly amateurish image on the surface is a layered world of the artistās imagination, where disparate objects coexist and slam up against one another; where space becomes elastic and motion illusive and the viewer is challenged to follow along. Itās all a playful, metaphysical romp. It may not make any rational sense, but it doesnāt have to.