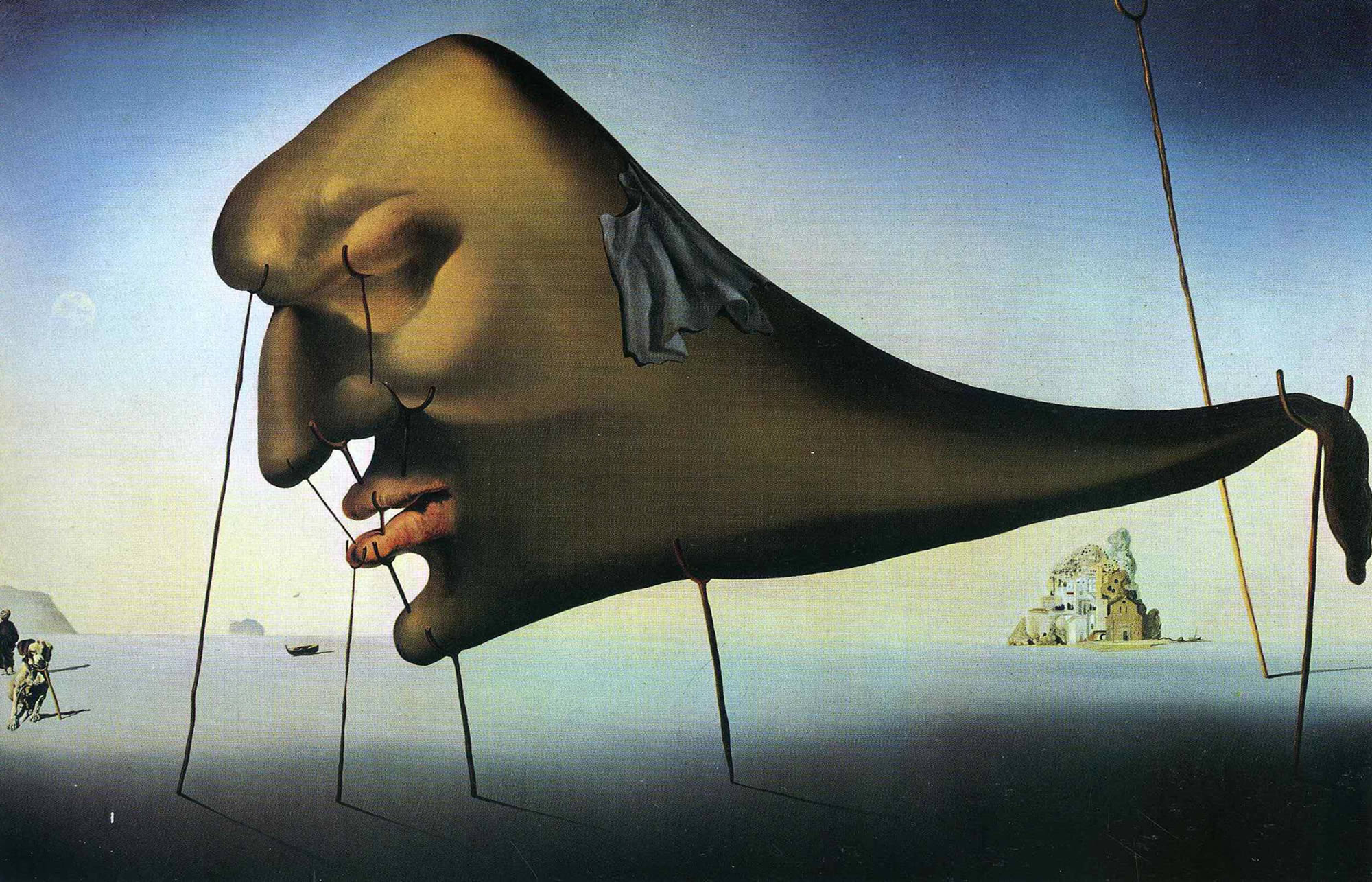 Salvador Dali didnâ€™t suffer from phobias, he reveled in them. His list of pathological fears ran from childhood ereuthophobia, a fear of blushing, to acrididophobia, a fear of grasshoppers. A general fear of insects was connected to delusional parasitosisâ€”a feeling of nonexistent bugs infesting oneâ€™s skin. He also feared, among many other things, the female body and becoming a father.

Top: â€śSleepâ€ť(1937) by Salvador Dali, suggests the realm of dreams, where his imagination dwelled. 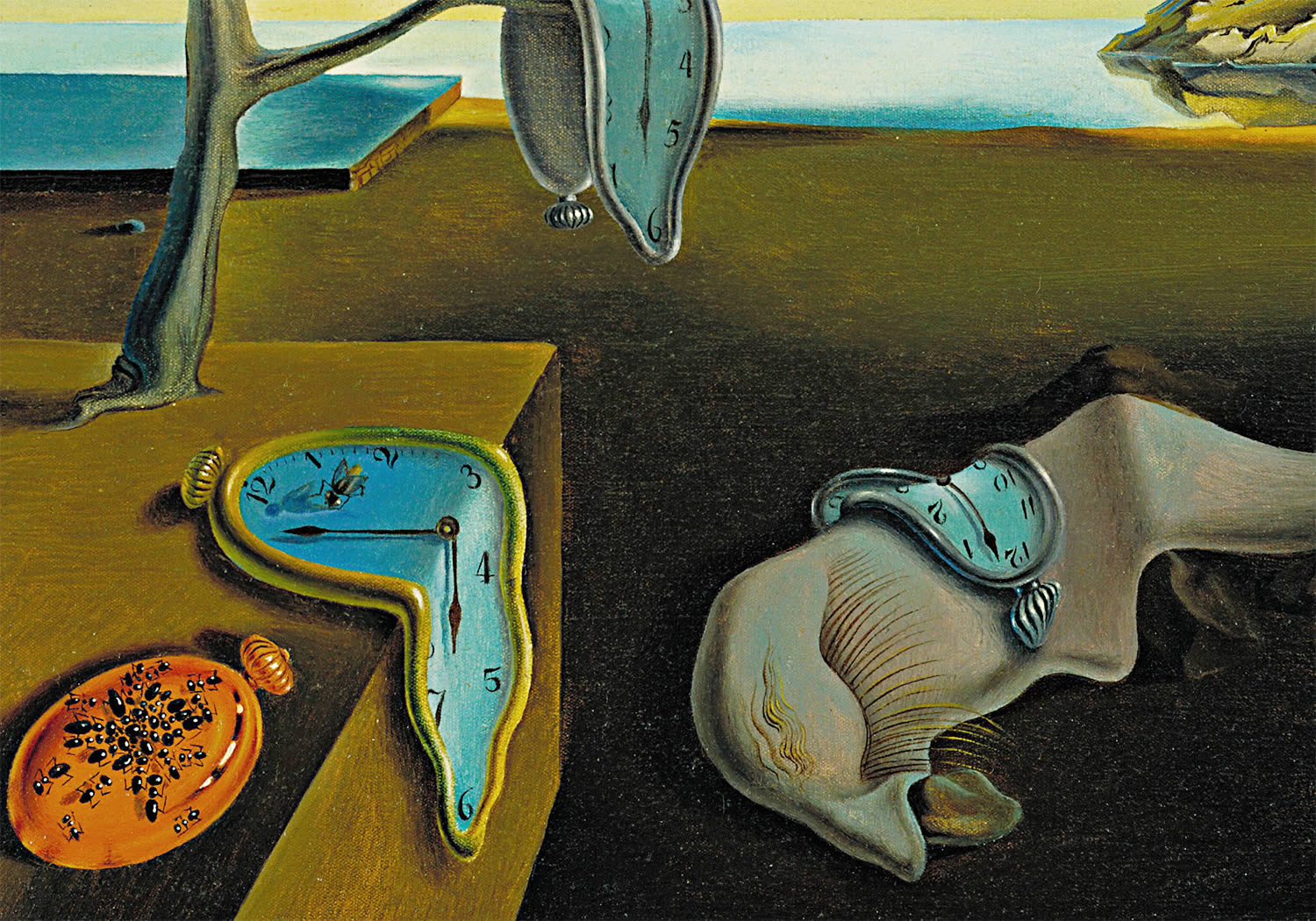 Ants mark the inevitable passing of time in “The Persistence of Memory” (1931).

Crawling and swarming black ants. Beautiful, colorful butterflies floating individually and in clusters. An oversized lone grasshopper perched over the mouth of a deformed head. Daliâ€™s paintings are infested with the very insects that terrify him. Ants, a common image, signify decay, suggesting also a fear of death. Grasshoppers, which pop up with some regularity, he so feared as a child that other children threw them at him for fun, just to see him react. [1] 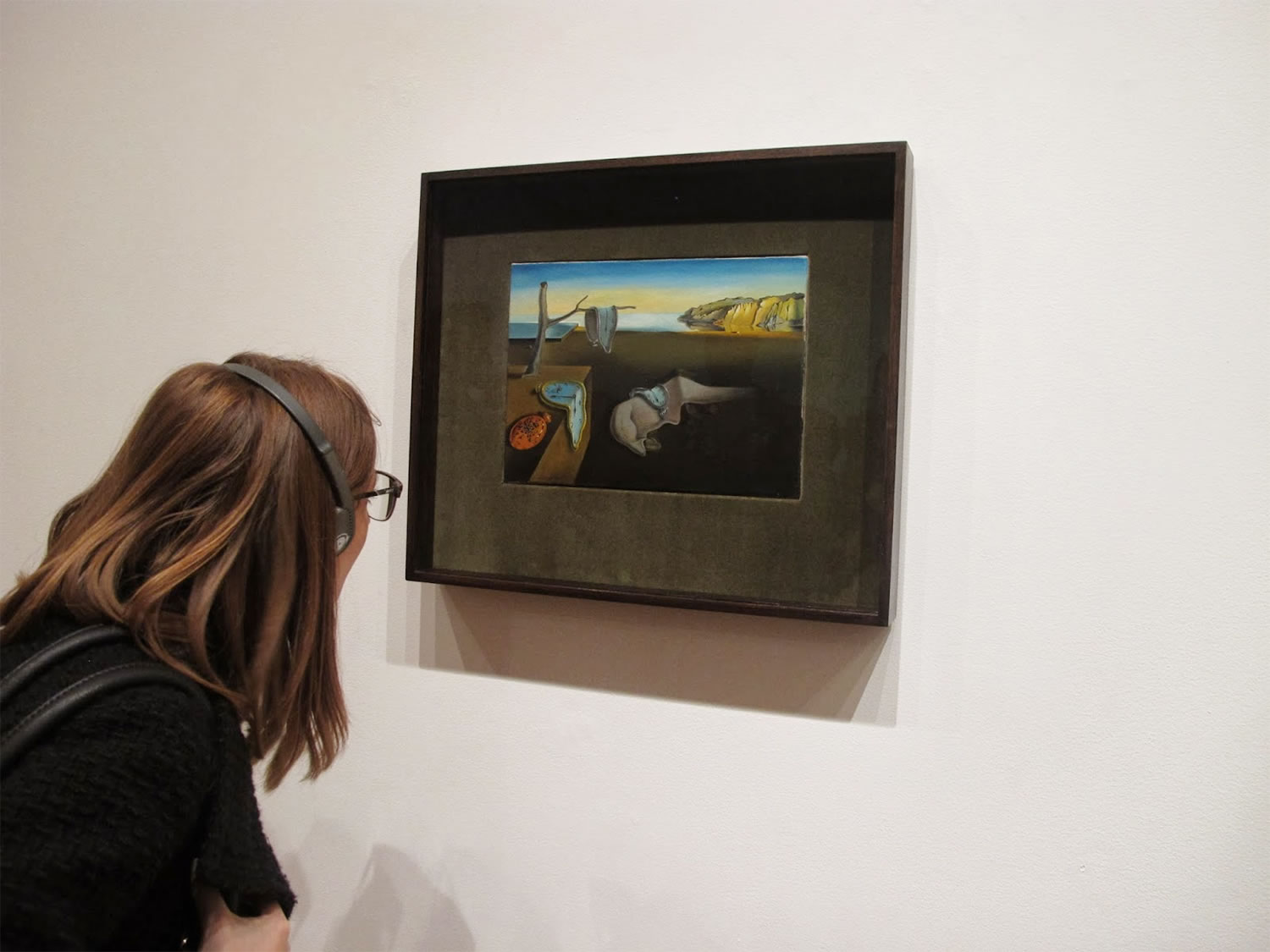 Can “The Persistence of Memory” really be that small? Astoundingly, yes. Photo Â© Christina Whiting.

Dali was endlessly fascinated with all things small. Not just insects, but things like olives, breadcrumbs, grains of sand, and later blackheads and arm hairs also drew his focused attention. He believed that little things had the power to disrupt beings a hundred times bigger than themselves. [2] And many of his early paintings are surprisingly small. The iconic “The Persistence of Memory” may loom large in the history of modern art, but it measures a mere 9 Â˝ by 13 inches, barely larger than a piece of printer paper. 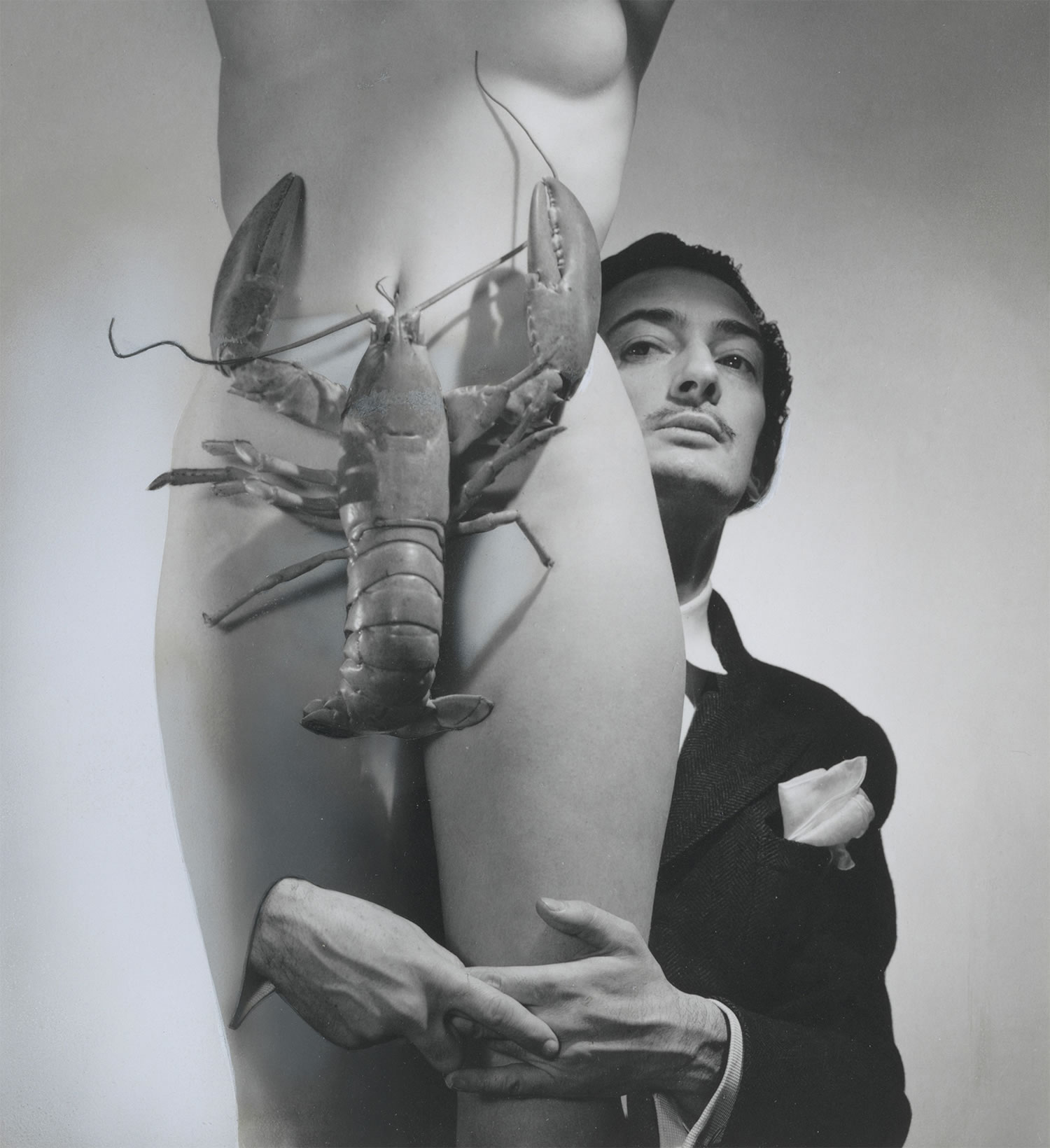 In Daliâ€™s symbolic vocabulary, an exoskeleton represented armor protecting the soft creature within. It was a concept he thoroughly related to, being himself a vulnerable hermit crab in need of a hard shell to protect him from the outside world. [3] Lobsters especially had a starring role, not only in paintings, but also printed on a dress for the designer Elsa Schiaparelli and fabricated in plaster and affixed to the handset of a 1930s rotary phone. 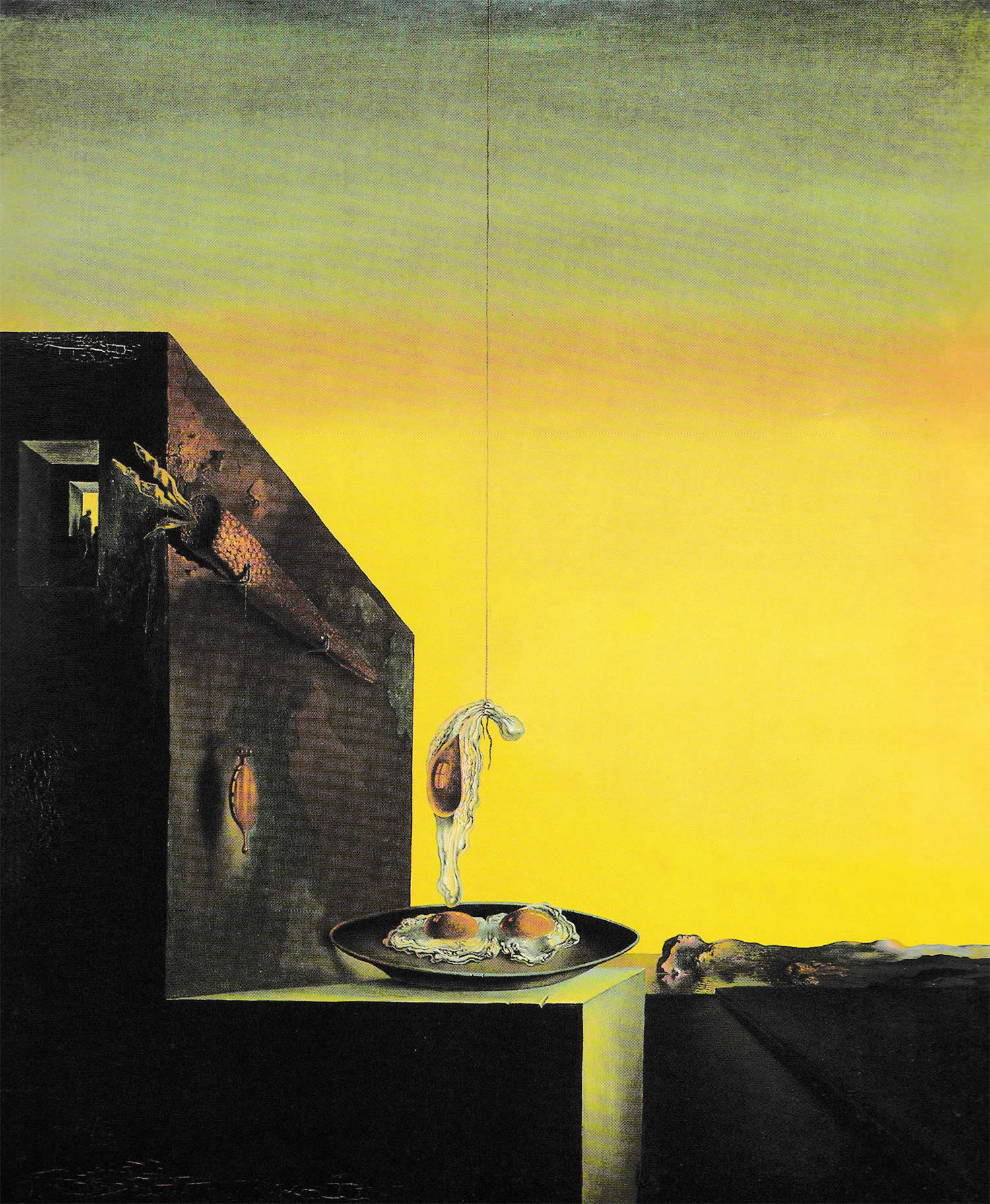 “Eggs on the Plate without the Plate” (1932). Hard on the outside, soft and squishy inside.

Like a crustacean, an egg has a hard shell protecting a soft interior. Eggs are fundamentally prenatal and intrauterine, so they also symbolize birth, new life, and hope, and Dali had a distinct fondness for them. They appear whole, as in “Metamorphosis of Narcissus,” or cracked open and cooked, as in “Eggs on the Plate without the Plate” (shown above). Daliâ€™s home in Barcelona has egg sculptures nestled in alcoves, and at the Dali Museum, giant eggs crown the top of the building. 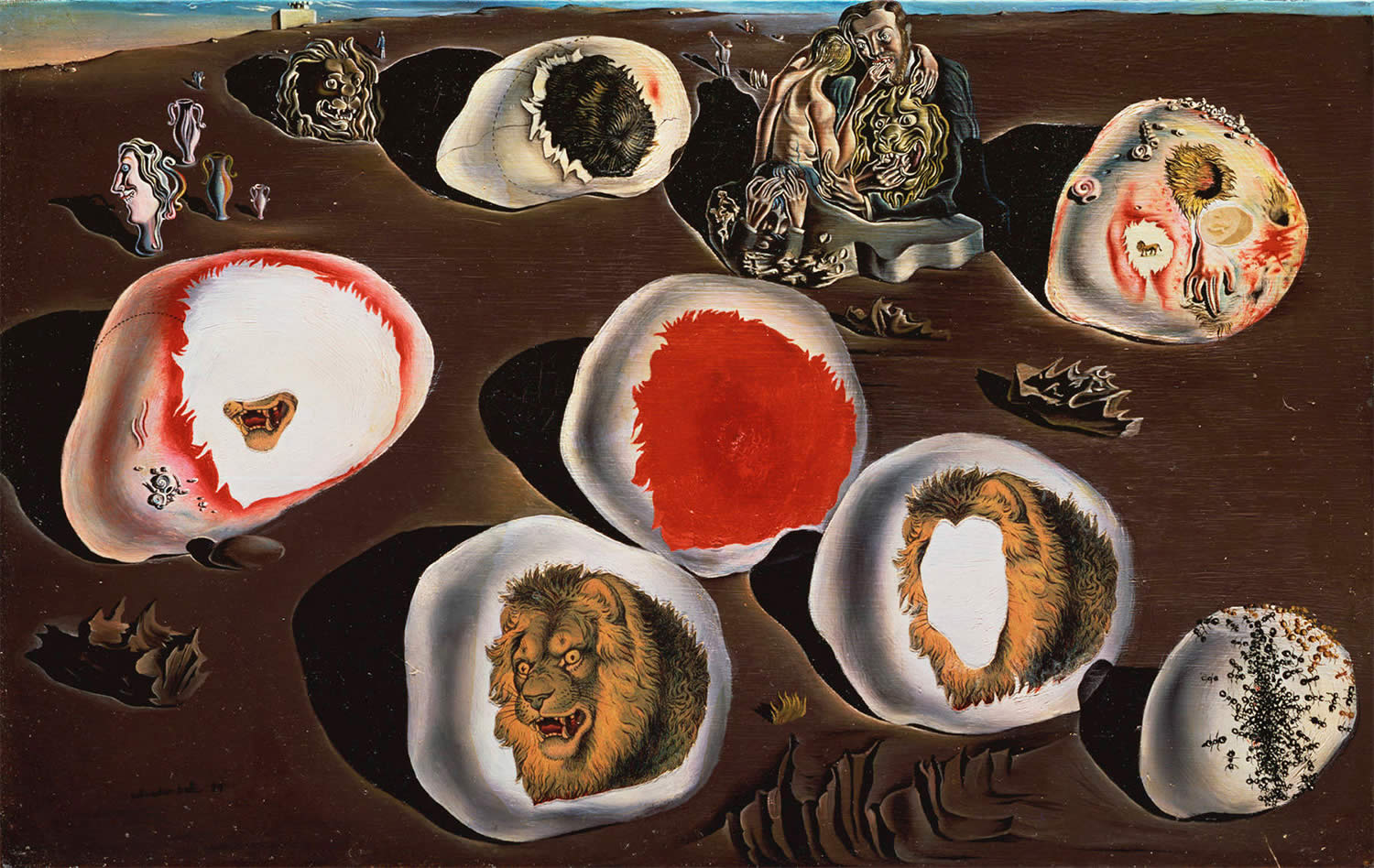 Beware of lionsâ€”and genitalsâ€”with sharp teeth! “The Accommodations of Desire” (1929).

Ironically, given his love of eggs, Dali was terrified of their origin. Female sexuality and its component parts terrified the artist, as graphically evident in “The Bleeding Roses,” with its literally visceral imagery of a womanâ€™s dripping abdominal organs. In “The Accommodations of Desire” (above), lionâ€™s heads are meant to signify vagina dentata. The toothed vagina, a powerful image from folklore, represents a womanâ€™s potential to injure or even castrate a man during intercourse, the root of Daliâ€™s phobia. 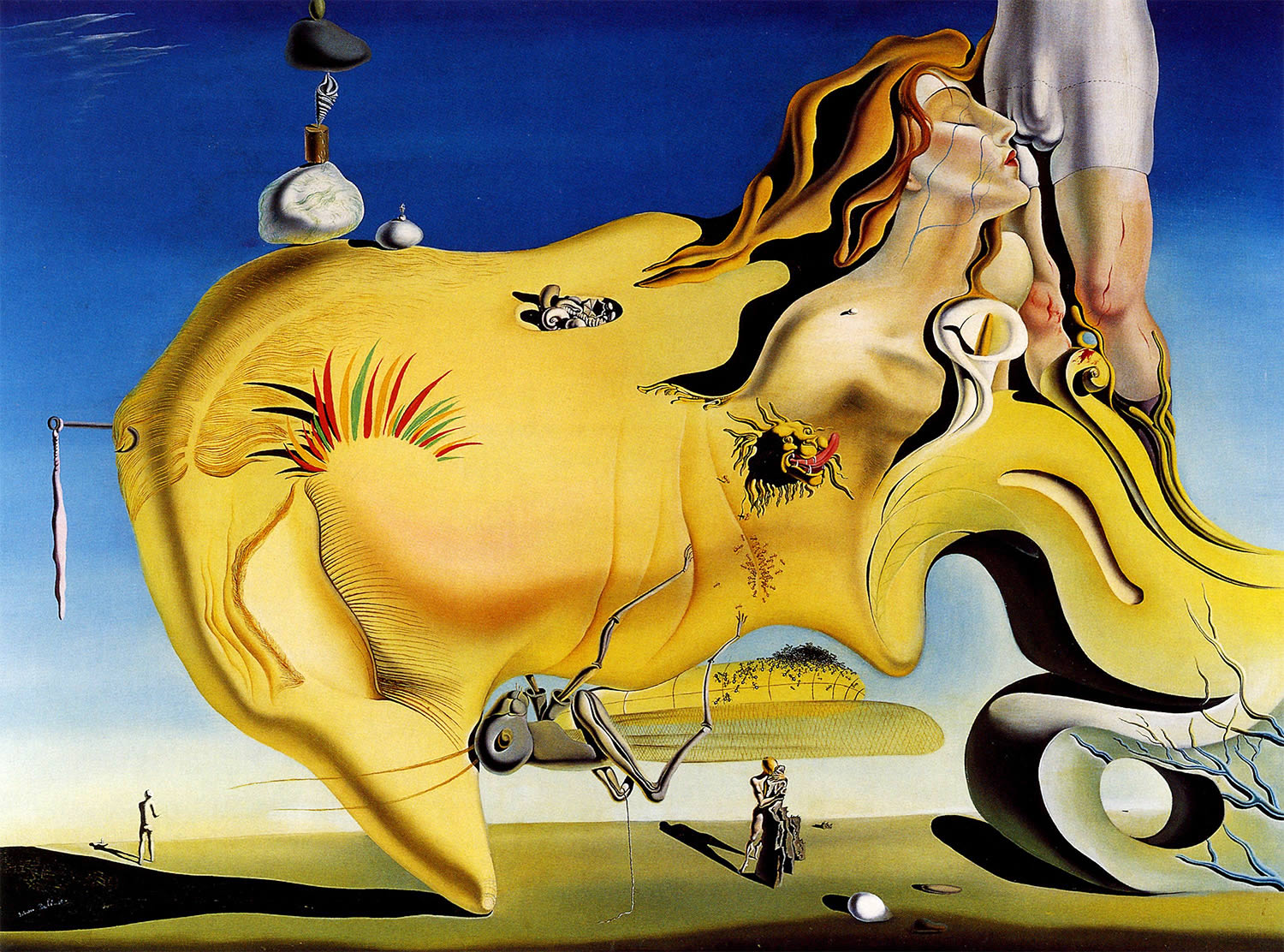 “The Great Masturbator” (1929) assaults the viewer with many of Dali’s frequently used symbolic images. 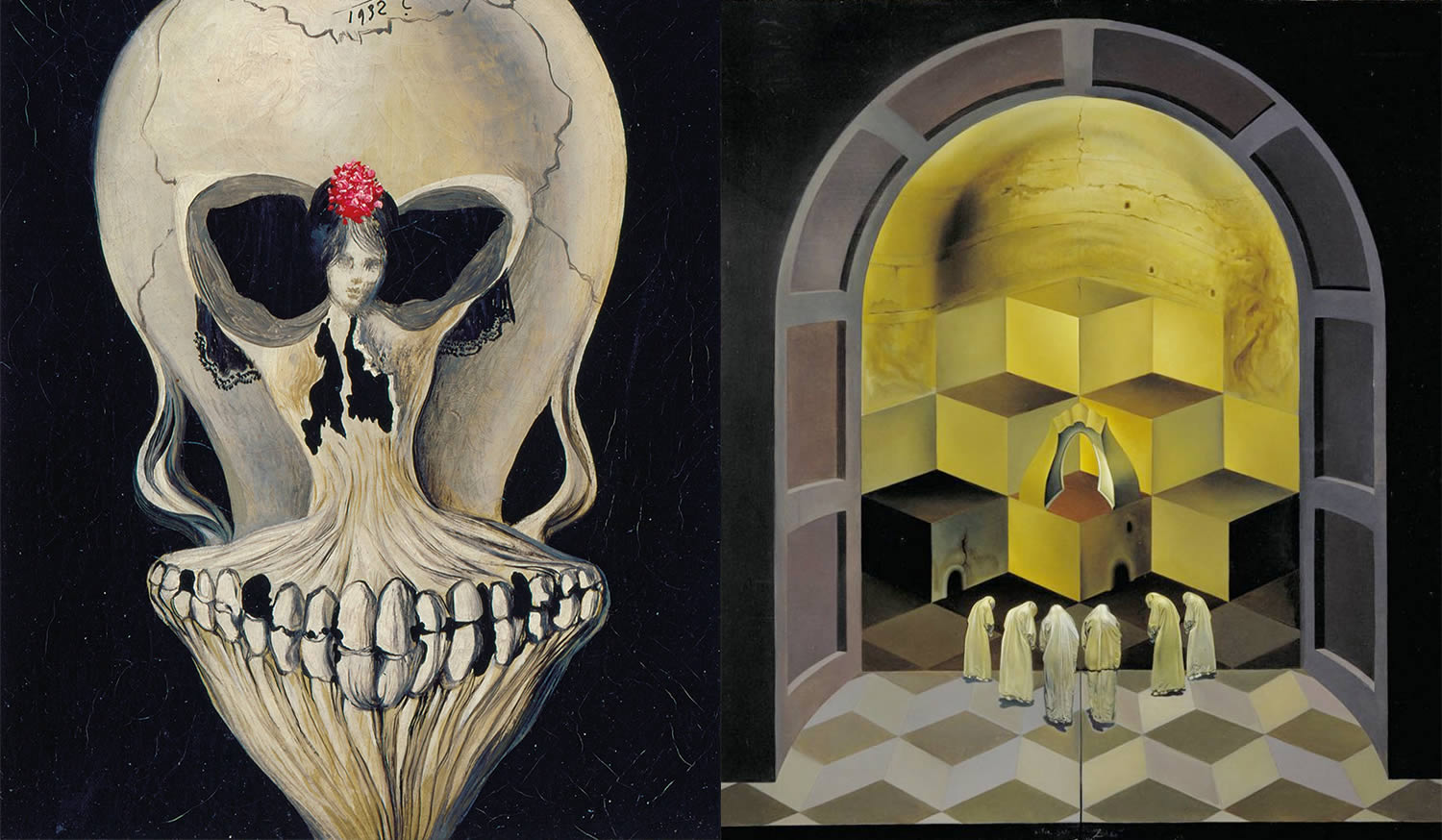 True to his paradoxical nature, Dali was both frightened and compelled by death. Skulls, a clear representation of human mortality, appear regularly in his paintings. In “Atmospheric Skull Sodomizing a Grand Piano,” the skull is warped and disturbing. In “The Face of War,” iterations of skulls reside within the orifices of a horror-stricken head. Most famously, he would depict a skull indirectly by using other elements of the image, as in “Ballerina in a Deathâ€™s Head“â€”a technique that has inspired countless artists since. 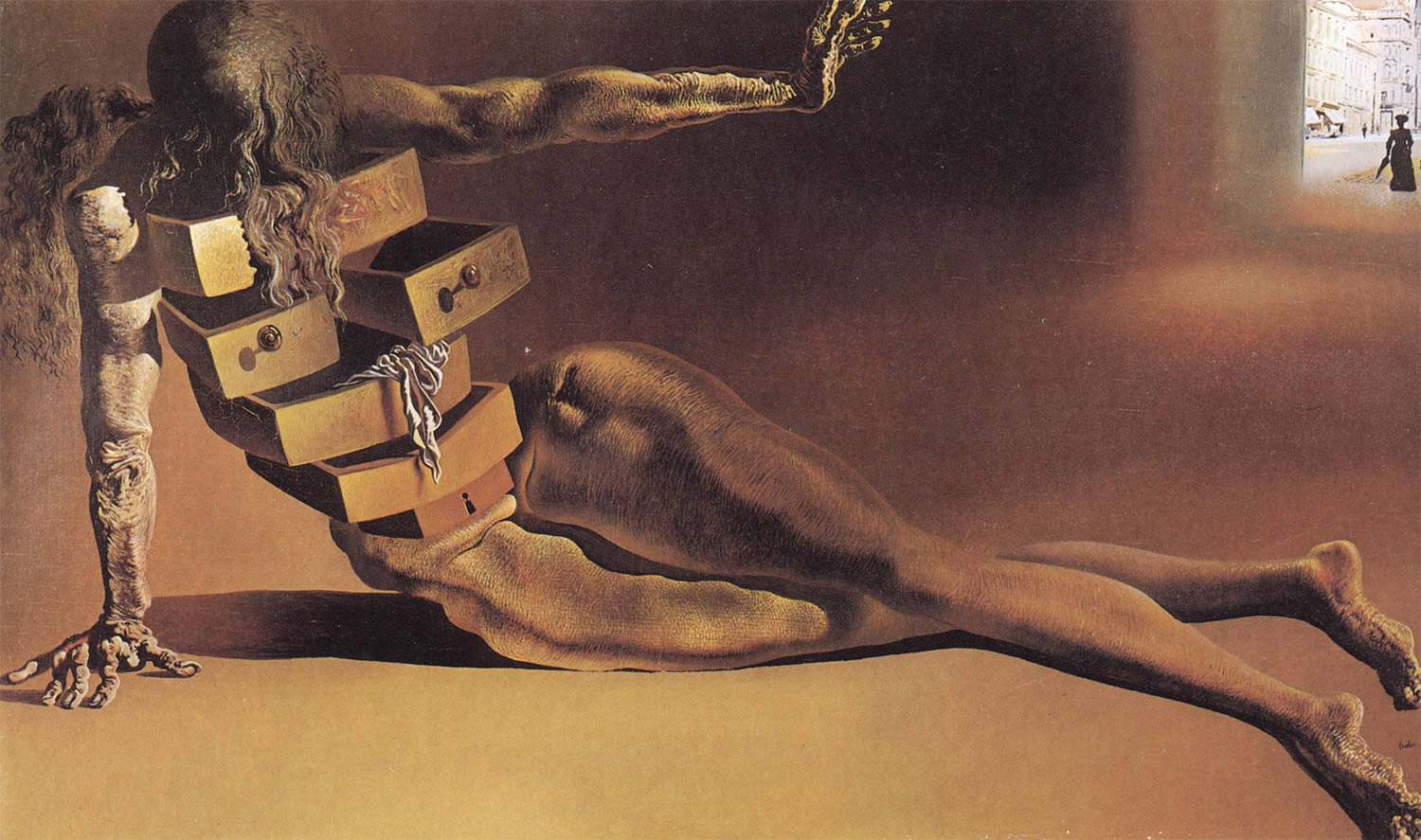 A faceless old man reveals his inner self in “The Anthropomorphic Cabinet” (1936).

The writing of Sigmund Freud, especially The Interpretation of Dreams, enthralled Dali, and in fact the two met shortly before the psychoanalystâ€™s death. What resonated with Dali was Freudâ€™s approach to the hidden recesses of the mindâ€”the subconscious, the source of dreams and the driving force behind the artistâ€™s work. The paintings “The Anthropomorphic Cabinet” and “The Burning Giraffe” exemplify Daliâ€™s use of drawers integrated into the human form to signify these hidden aspects of the self. 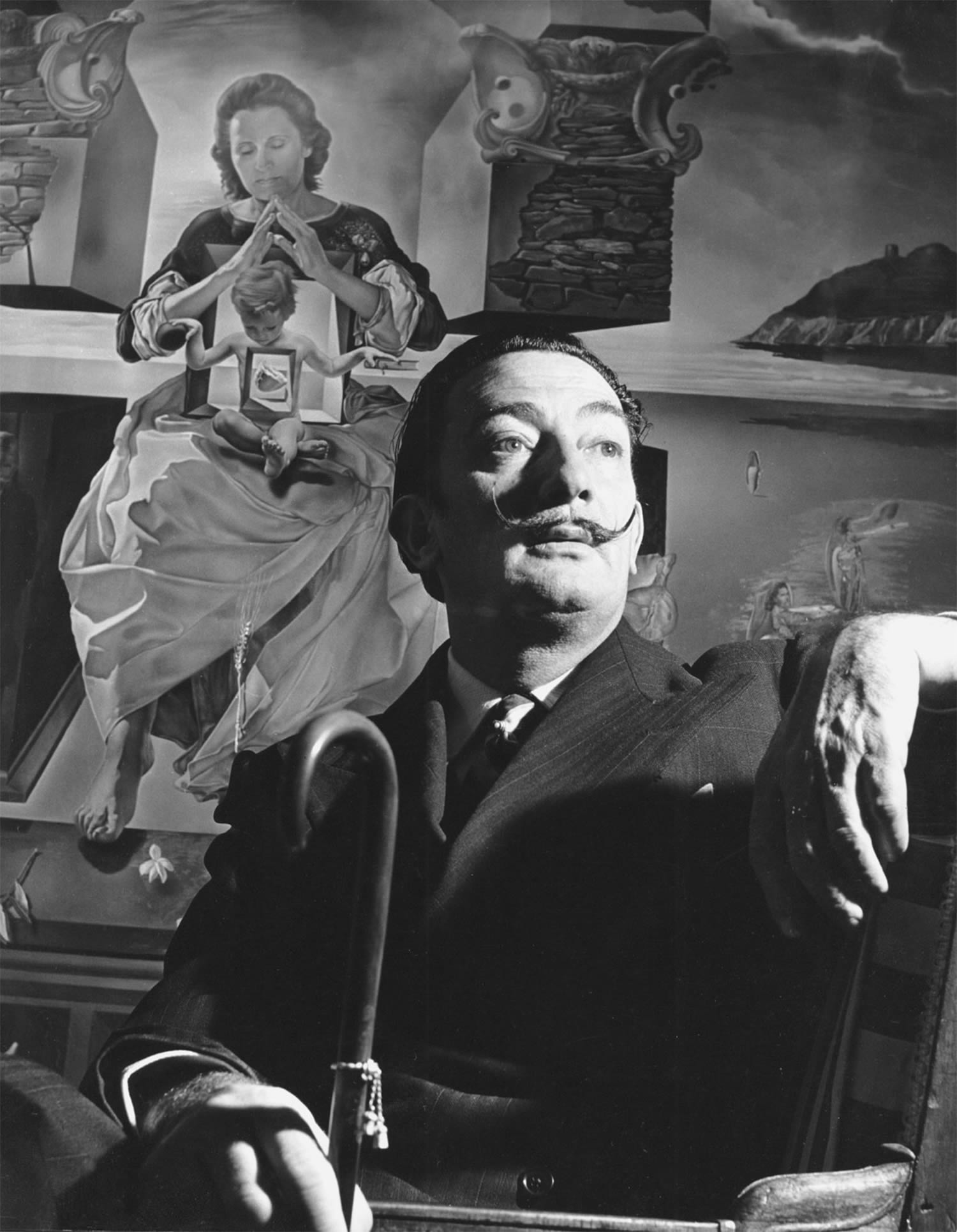 Conflicted from childhood by his motherâ€™s Catholic faith and his fatherâ€™s aversion to religion, later in his life Dali experienced a renewal of faith and embraced the iconography of traditional Christianity. He became fascinated with its metaphysical aspects and the possibility of integrating religion and science. Starting in the late 1940s and into the â€™50s, he created a series of overtly religious paintings depicting the Last Supper, several versions of the crucified Christ, and the Madonna as portrayed by his longtime muse and companion, Gala. 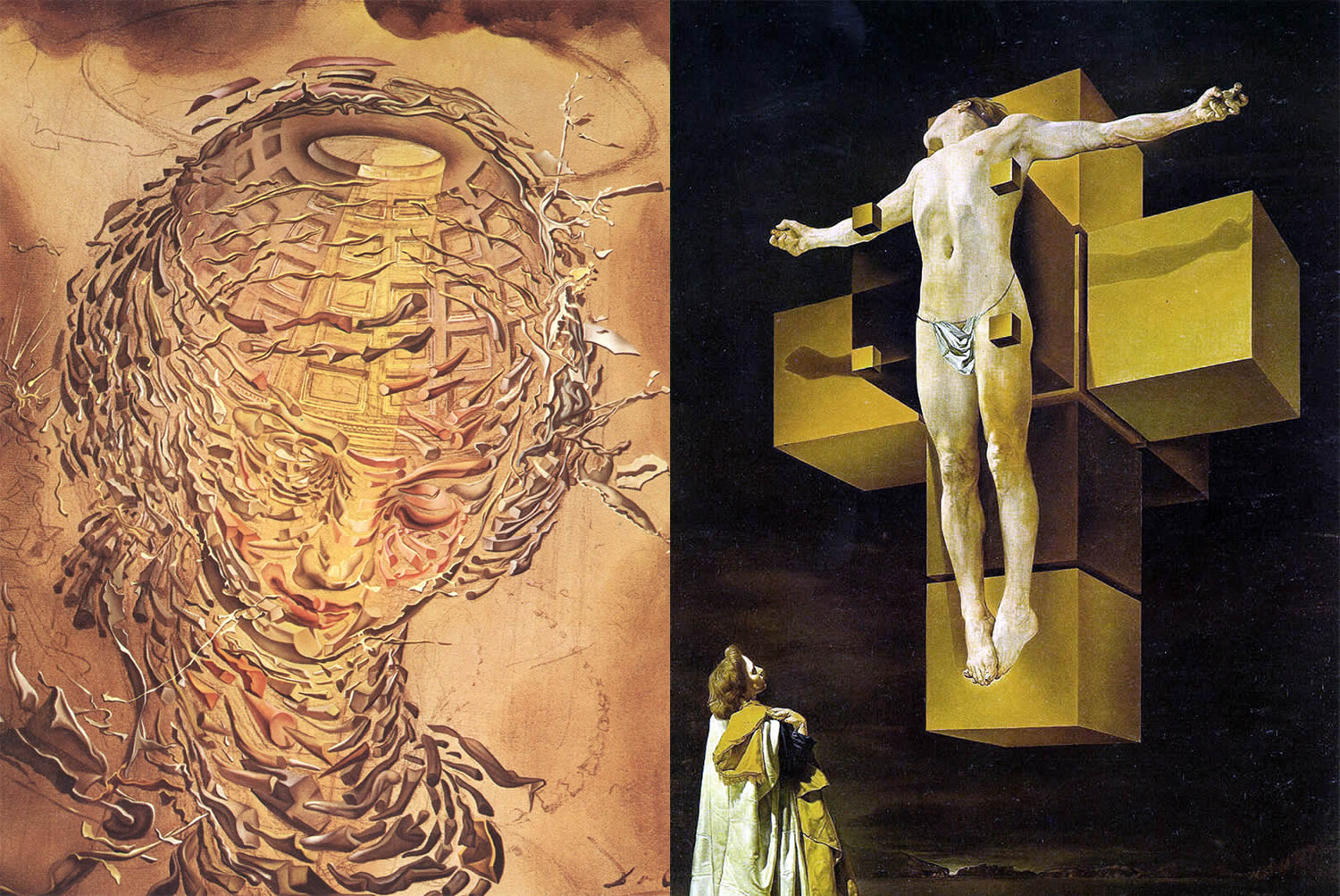 In conjunction with a renewed religious fervor, Dali developed an intense fascination with science, particularly quantum and nuclear physics. He devoured issues of Scientific American and loved to discuss its contents. [5] It was the atomic age, the advent of nuclear weapons, and he worked the science into paintings like “Crucifixion (Corpus Hypercubus)” with its metaphysical, fourth-dimensional crucifix, and “Exploding Raphaelesque Head,” an homage to Raphaelâ€™s Madonna, shattered into atomic fragments.