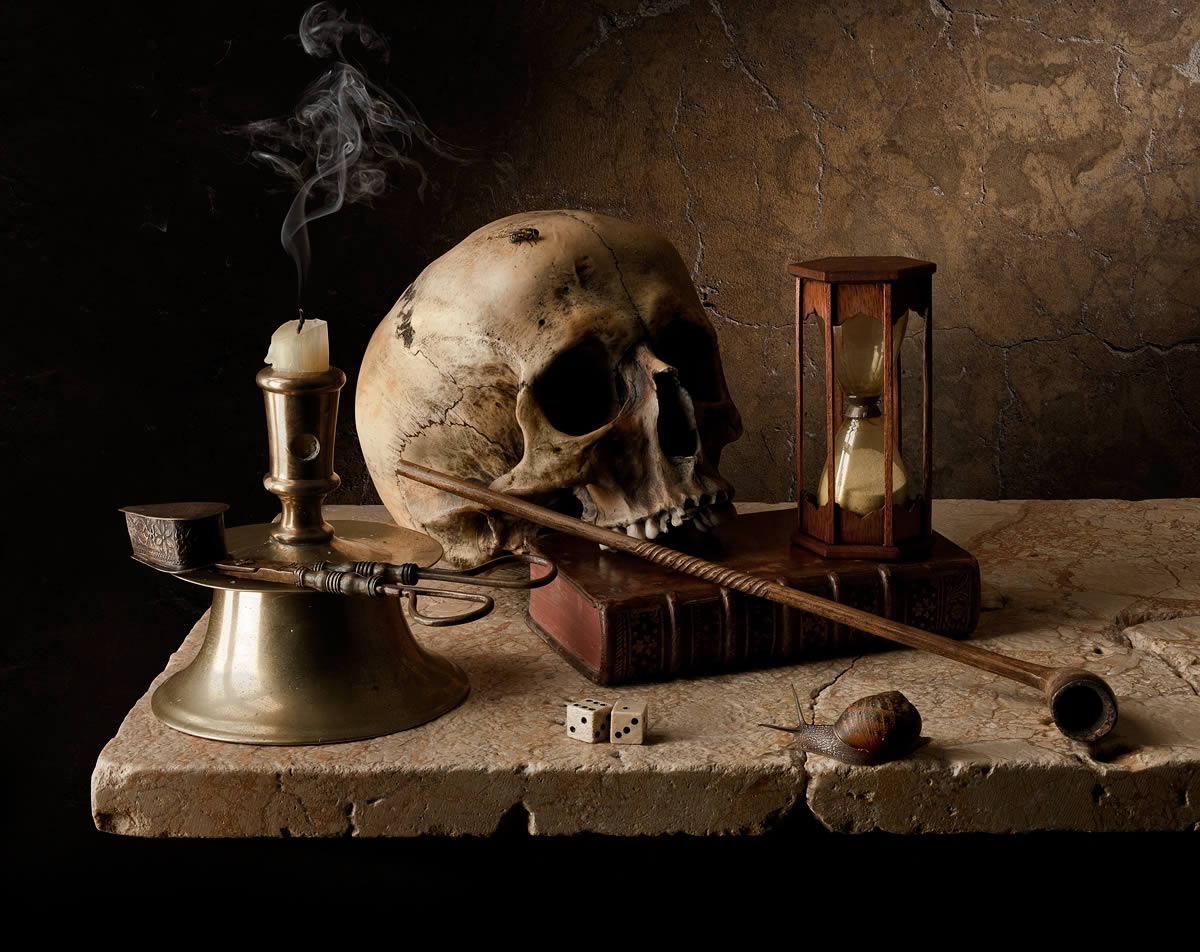 Skulls remind us of what strangeness exists just beneath the armour of flesh. They are also pure emblems of death. In art “Memento mori” pieces symbolize our morality and death‚Äôs relationship to life. “Memento mori” translates from the Latin as “remember to die.”

American illustrator, Charles Allan Gilbert (1883 ‚Äì 1929), produced an acclaimed set of drawings centred on themes of the memento mori. ‚ÄúAll is Vanity‚Äù is the most famous example. Based on a quote from The Bible, the drawing is a playful optical illusion depicting a young woman staring into a mirror. Her body, the reflection and the table join to form a human skull.

Top: “Vanitas” by Kevin Best is directly inspired by the Dutch masters. 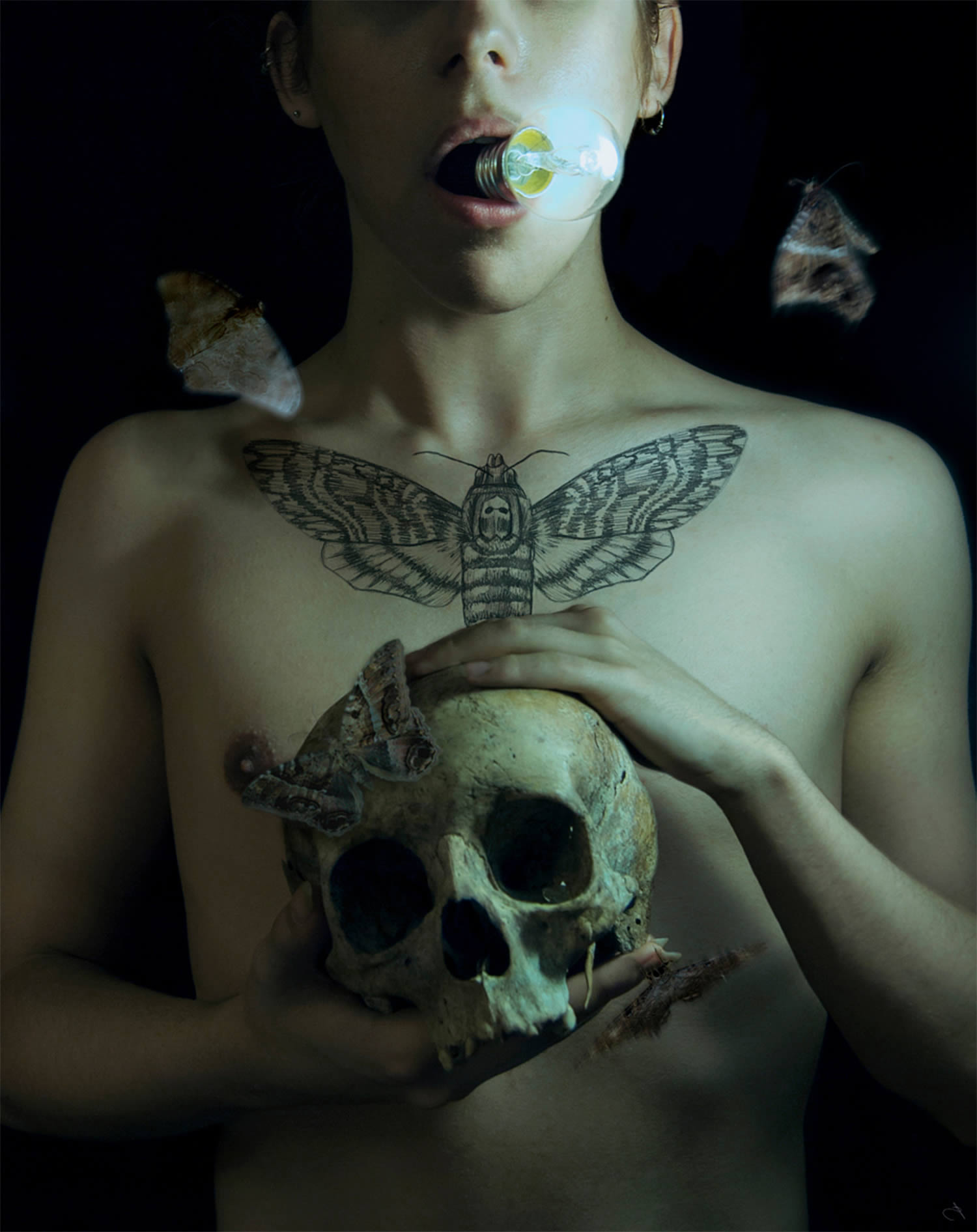 The Death’s-head hawkmoth has enthralled artists because of its sinister associations.

The Death‚Äôs-head hawkmoth is heavily associated with the supernatural and evilness. The photograph and its composition, by Tadzio Autumn, is inspired by the movie ‚ÄúThe Silence of the Lambs‚Äù (1991), in which a serial killer places a cocooned moth inside the throats of his victims. The imagery symbolises that life can spring from death. 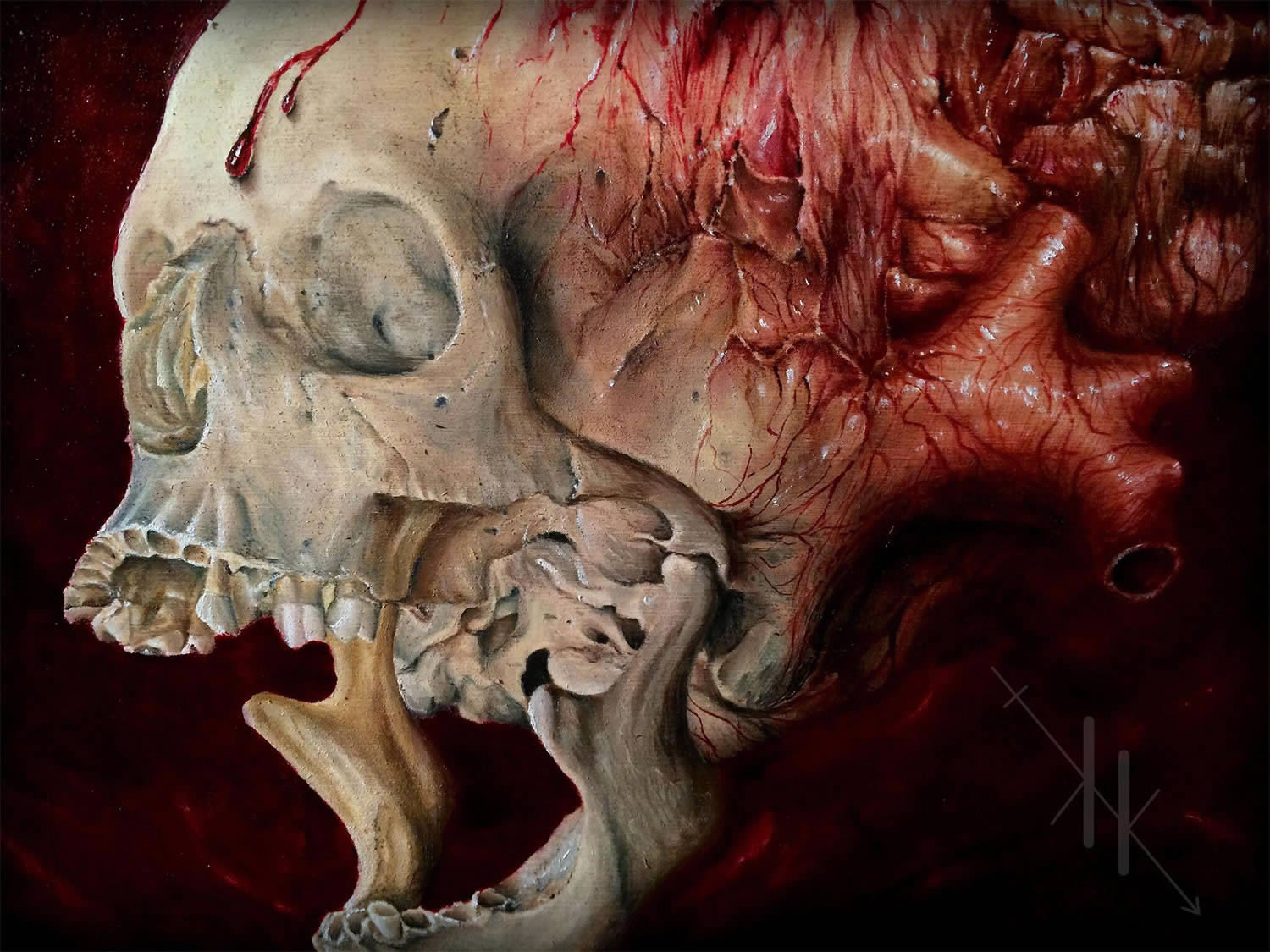 Artist Kit King is interested in hyperrealism and collaborates frequently with her husband, a fellow artist.

Kit King‚Äôs gory oil painting takes traditional memento mori imagery and gives it a unique and bloody spin. The use of intense, vivid crimson, the milky color of the skull, and the dramatic lighting invokes 17th century “Vanitas” art. The skull is fused to heart tissue with the mouth agape as if screaming out. It‚Äôs quite disturbing and violently surrealist with the artist‚Äôs attention to anatomy and bone structure enriching the piece. 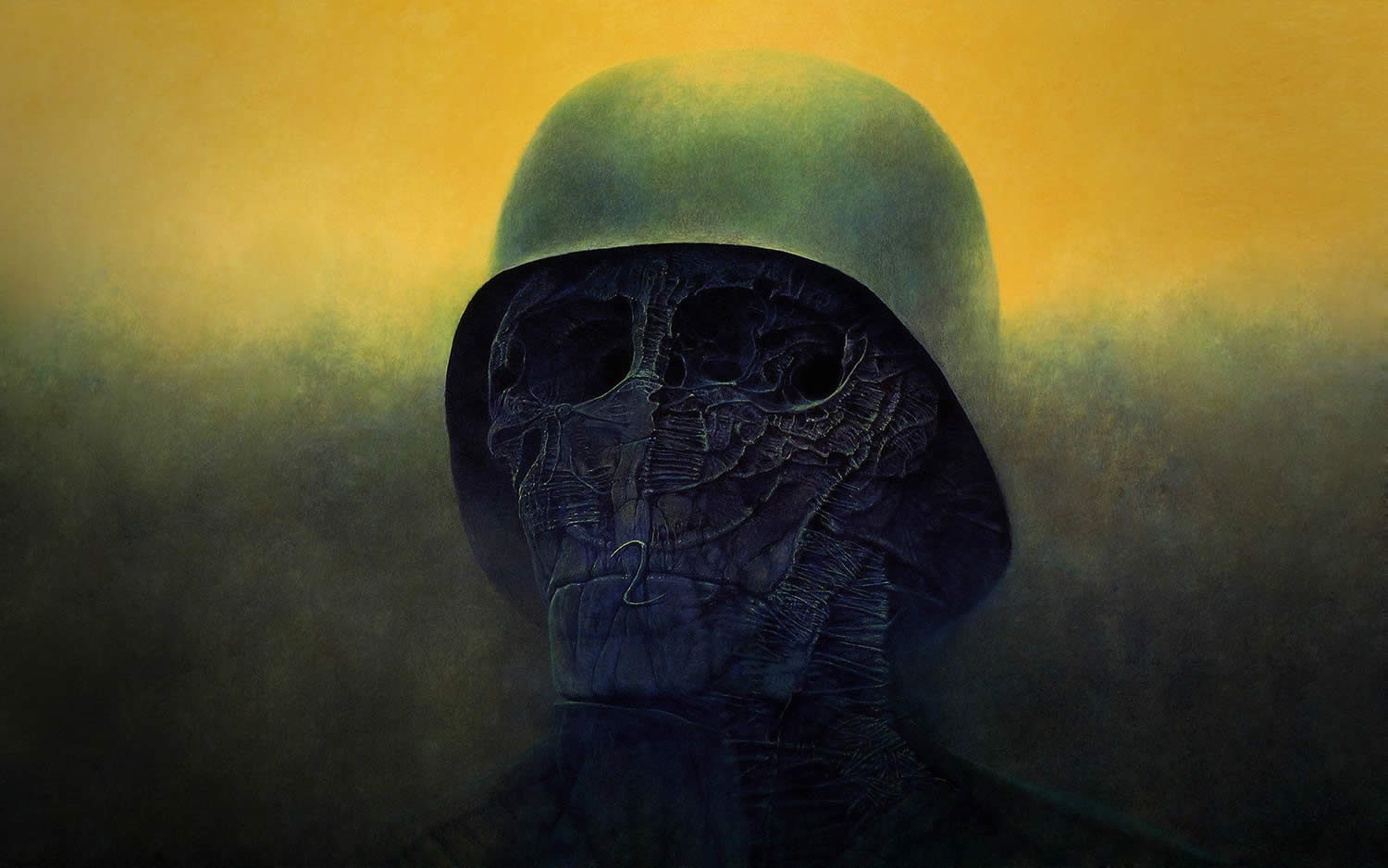 Zdzis≈Çaw Beksi≈Ñski‚Äôs bleak works defy simple categorization. In ‚ÄúUntitled,‚Äù however, there is a certain amount of political and historical resonance. Perhaps, due to the artist’s own wartime experiences and a life marked by tragedy. The petrified wooden face without human features, the worm-like hook forming what could be the letter “Z” and the army helmet immediately brings to mind the terrors of Nazism. The softly abstract, almost Rothko-like, background is an extra eerie touch. 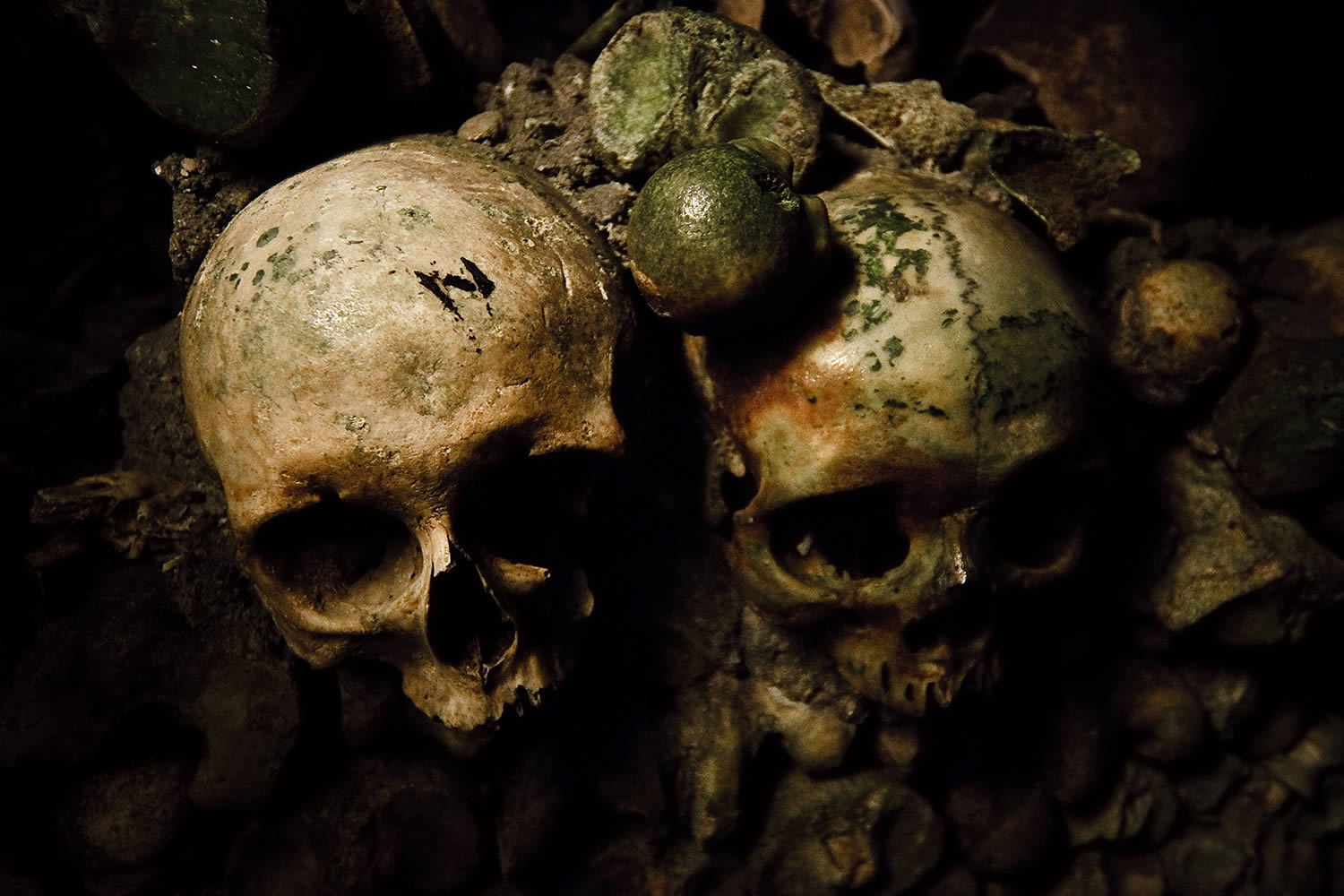 It is easy to forget that the skulls in Robert Kent’s composition were once people.

Photographer Robert Kent found inspiration for his take on the memento mori in the famed catacombs beneath Paris. The composition references Medieval and Flemish ‚ÄúVanitas‚Äù art of the 16th and 17th century. The split lighting also lends the image a grungy, sickly look. The green, putrid markings on the skulls, bones and earthy textures combine well. It‚Äôs a vision of death, decay and time that is quite disturbing. 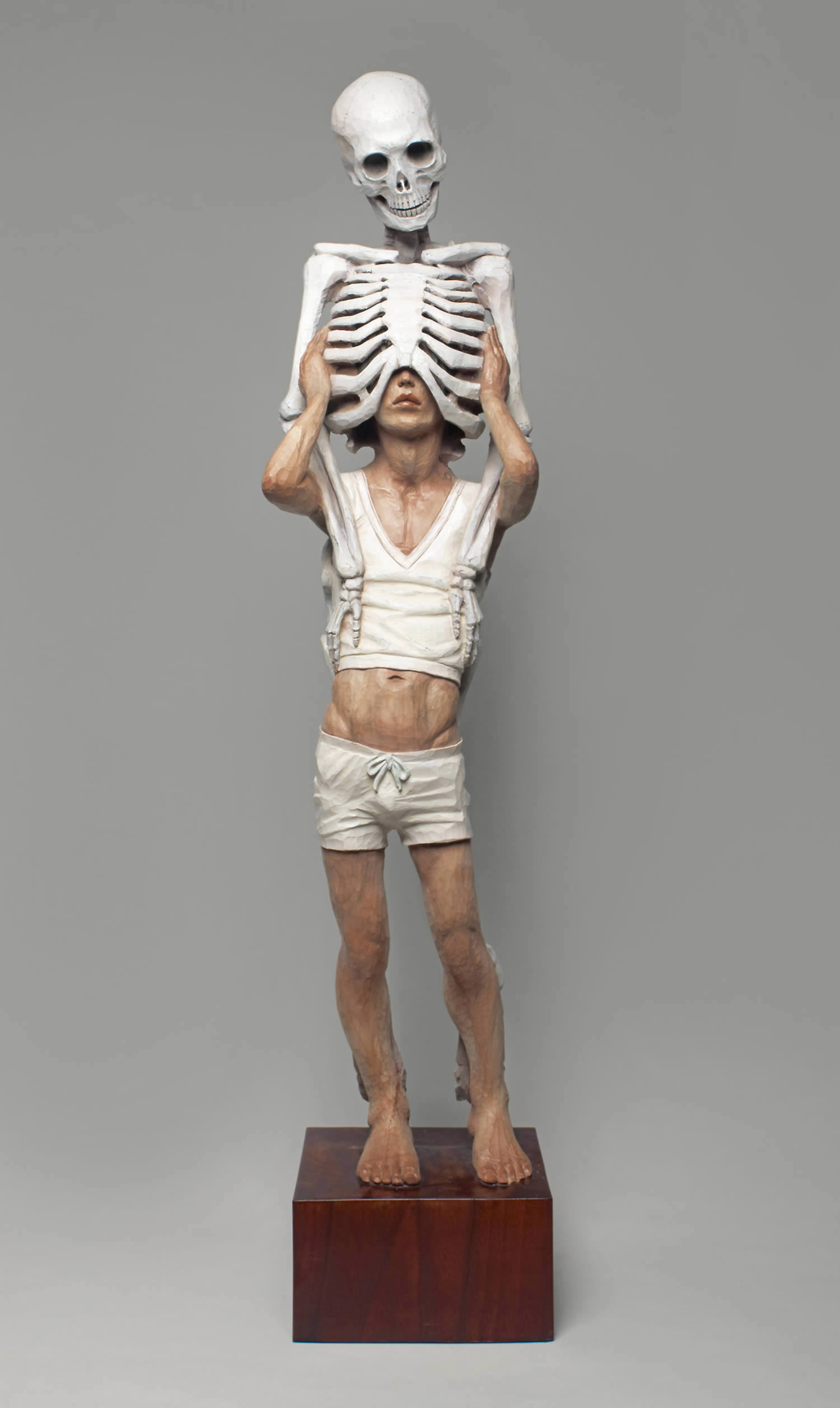 The surrealist sculpture by Yoshitoshi Kanemaki questions “What‚Äôs life? What‚Äôs death?‚Äô But it‚Äôs not at all thematically heavy, or even frightening. The paint on camphor wood sculpture captures these searching questions and the answer is ambiguous. Is the skeleton clasping on to the torso as a reminder of our mortality, or is the human figure itself in the process of dying? 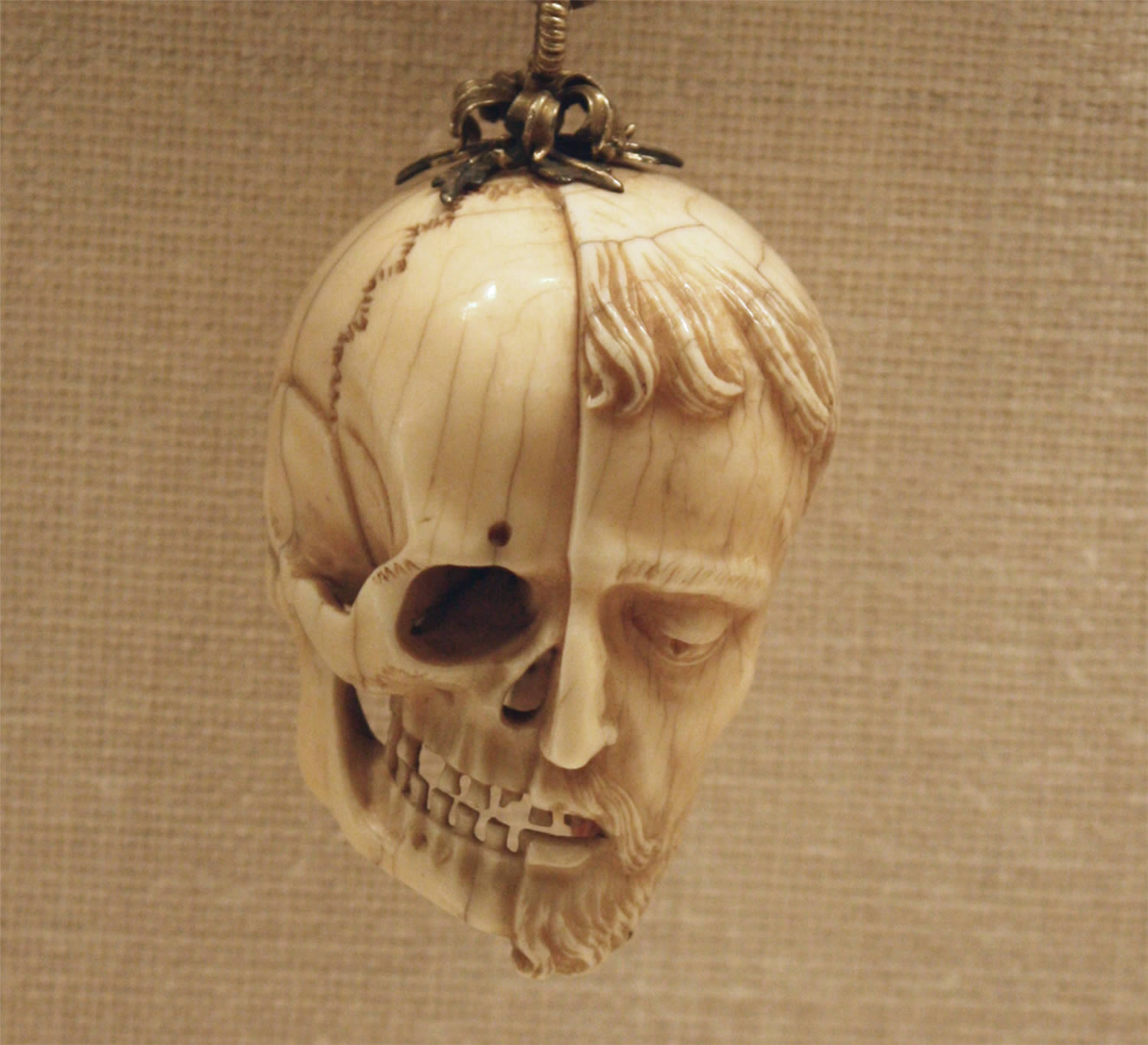 This religious artifact is displayed at the Metropolitan Museum of Art.

Carved in Germany between the years 1500-1525, this Ivory rosary with a gilded silver chain is a representation of how intimately life and death were connected by the act of praying. The face is split between flesh and bone as a reminder that a good life leads to a good death and the splendour of heaven. 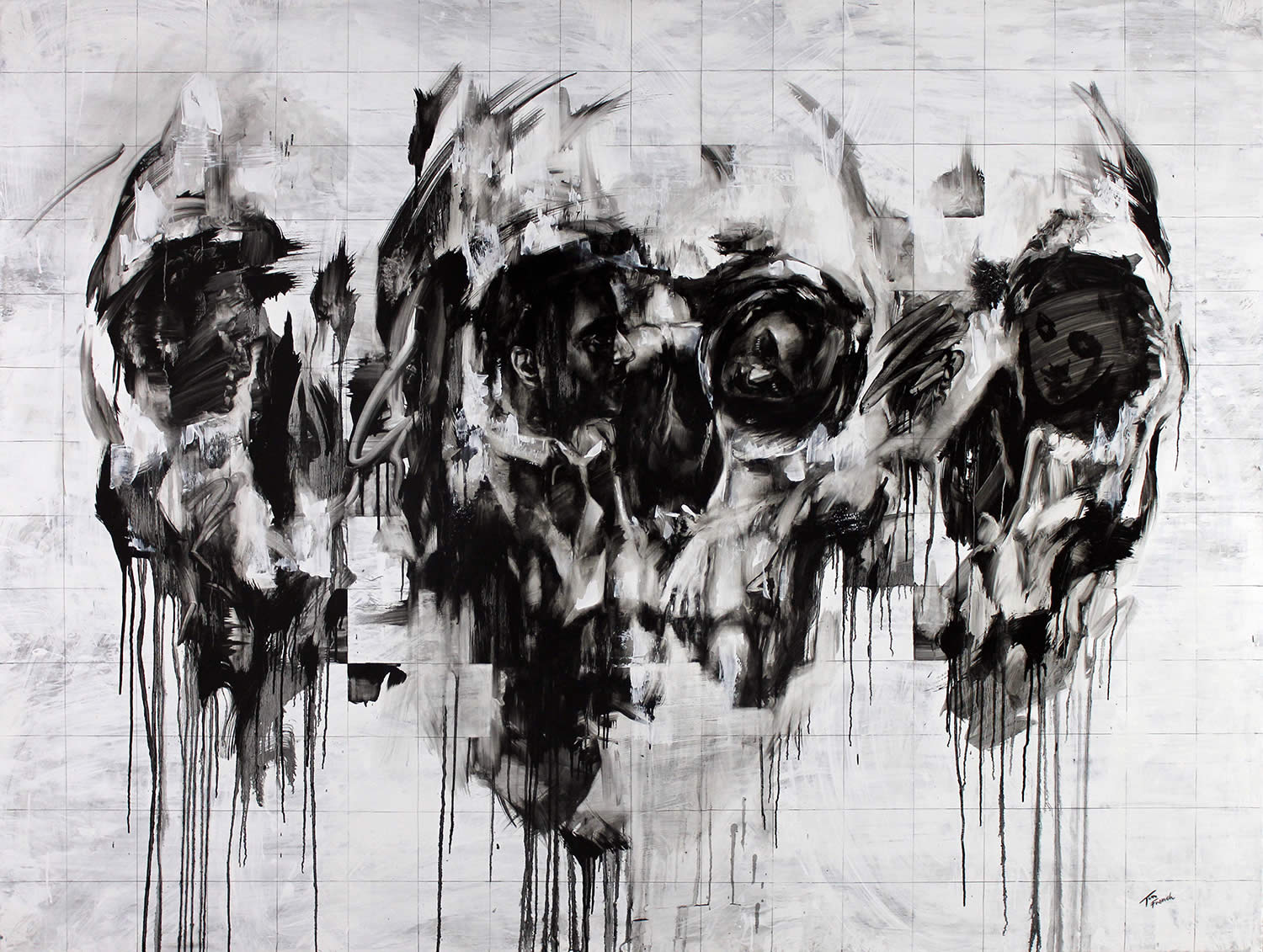 Tom French is known for paintings of skulls that emphasize optical illusions. They are inspired by Charles Allan Gilbert‚Äôs famous drawings. “Vanitas‚Äù (oil on canvas) represents three skulls with human figures entwined prominently in the eye sockets. There is a hint of romantic longing‚Äîa classic surrealist theme‚Äîpresent in this trio of images; the male appears to be reaching out across to a female in the third skull. 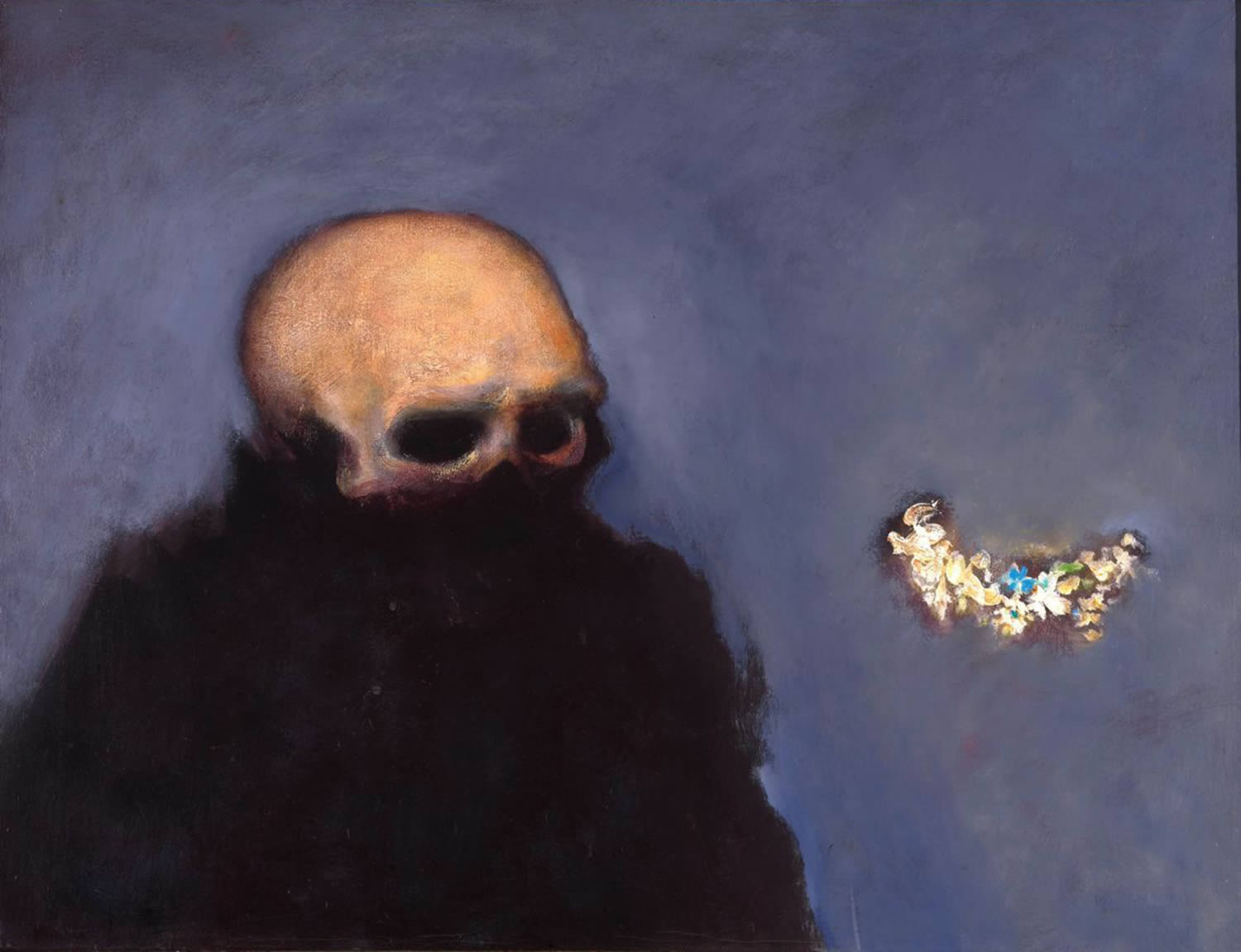 Walter Kuhlman (1918 ‚Äì 2009) was an abstract expressionist painter based in San Francisco. The image of the human skull has appeared in several major works, including ‚ÄúMemento Mori‚Äù and 1978‚Äôs ‚ÄúDance of Death.‚Äù A hunched figure with a sunken skull stares at a floating garland flowers. Death yearns for life. There is something immensely tragic at work in Kulhman‚Äôs painting. 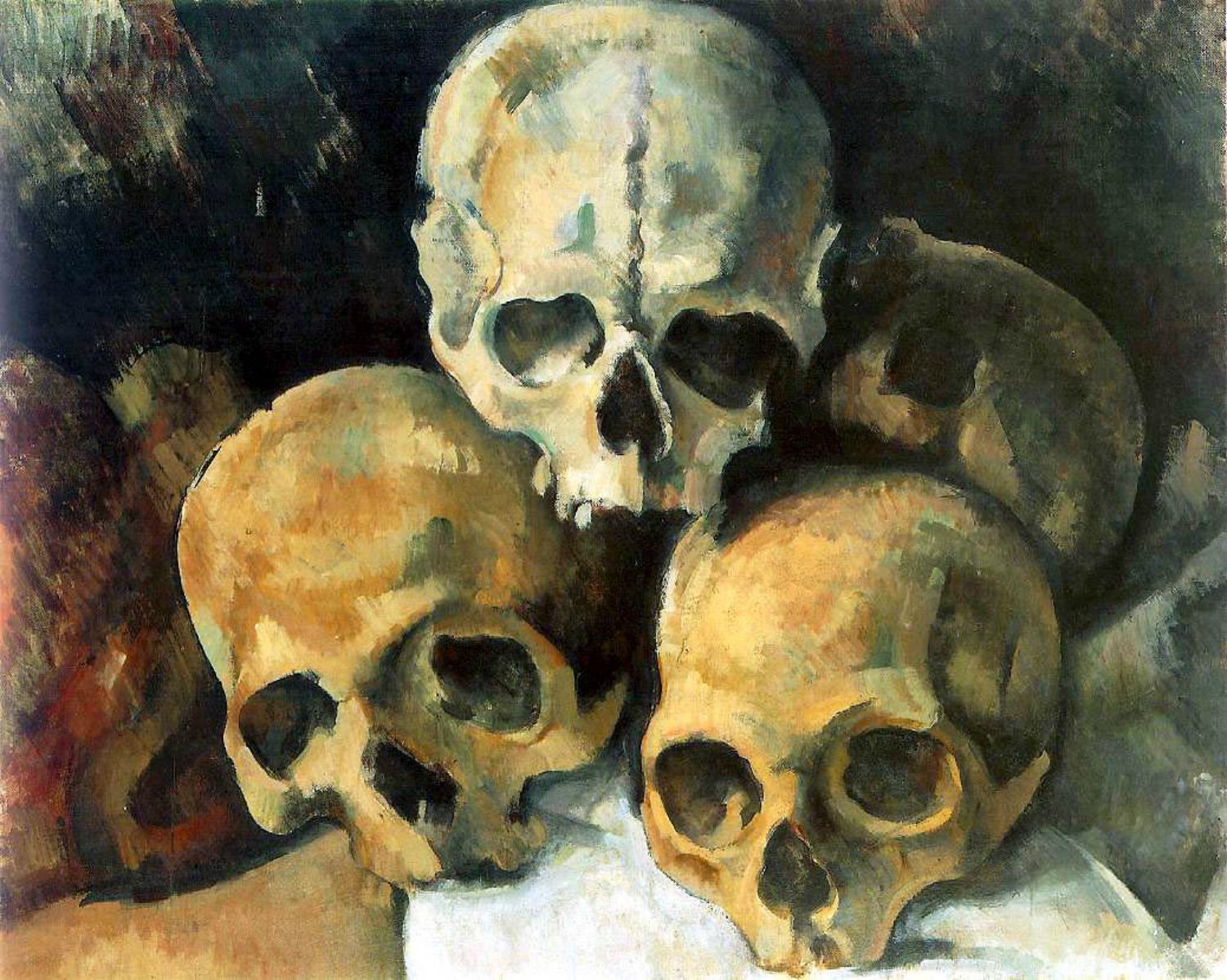 Oil on Canvas. 1901. The artist is said to have one declared, “How beautiful a skull is to paint!”

Post-Impressionist titan of the French art world, Paul C√©zanne, whose work goes for millions of dollars even today, offered up a radical take on the still life with ‚ÄúPyramid of Skulls‚Äù (1901). It is noted by critics for the unusual closeness of the objects and the biographical meaning behind the painting. C√©zanne was increasingly preoccupied with death and mortality, in his later years. 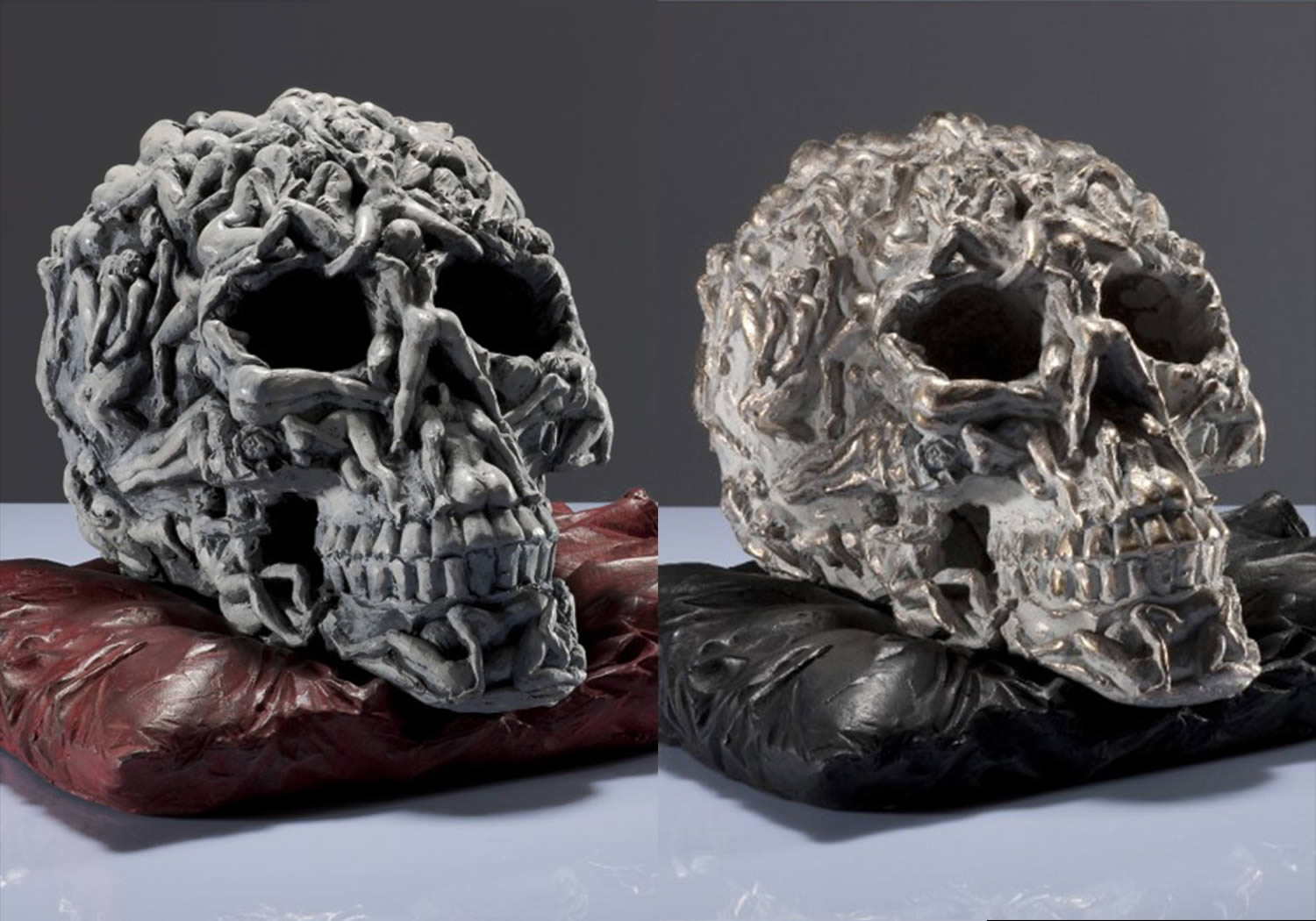 Matteo Pugliese‚Äôs bronze sculptures are inspired by the surrealist photo portrait of Salvador Dal√≠, known as ‚ÄúIn Voluptas Mors‚Äù (1951), by photographer Philippe Halsman, that featured naked women in a variety of poses to form a skull. Pugliese also makes a pun out of “Memento mori” by revising the title as ‚ÄúMemento A-mori.‚Äù Love and death are the twin engines of eroticism.