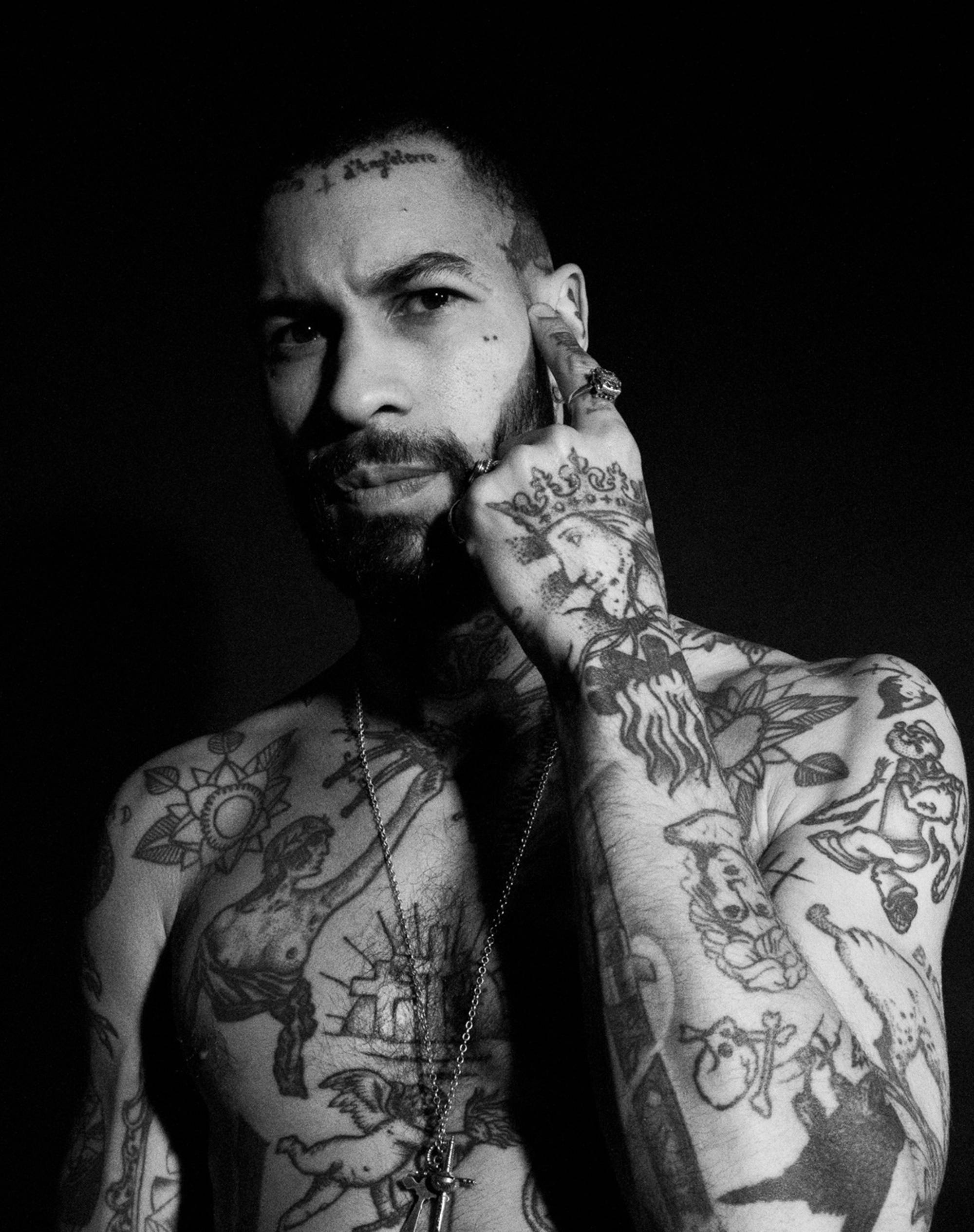 The first time I met Delphin Musquet, he was lying on a portable table in agony as Giorgio de Duesanti inked his body at a Californian event in 2019.

Both he and Duesanti are part of the resident team at Sang Bleu‚Äîa well-known brand and studio based in London, Zurich, and Los Angeles. Musquet established in the London shop already for the last few years, having started tattooing in 2017‚Äîa self-taught artist who prioritizes his drawing skills to better his tattoo work. In summary, Delphin Musquet is recognized for his interest in past-century iconography. Sacred hearts, skulls, and swallows are finely inked with a modern tattoo machine.

Above: A photograph of Delphin Musquet by Lukey Pamment. 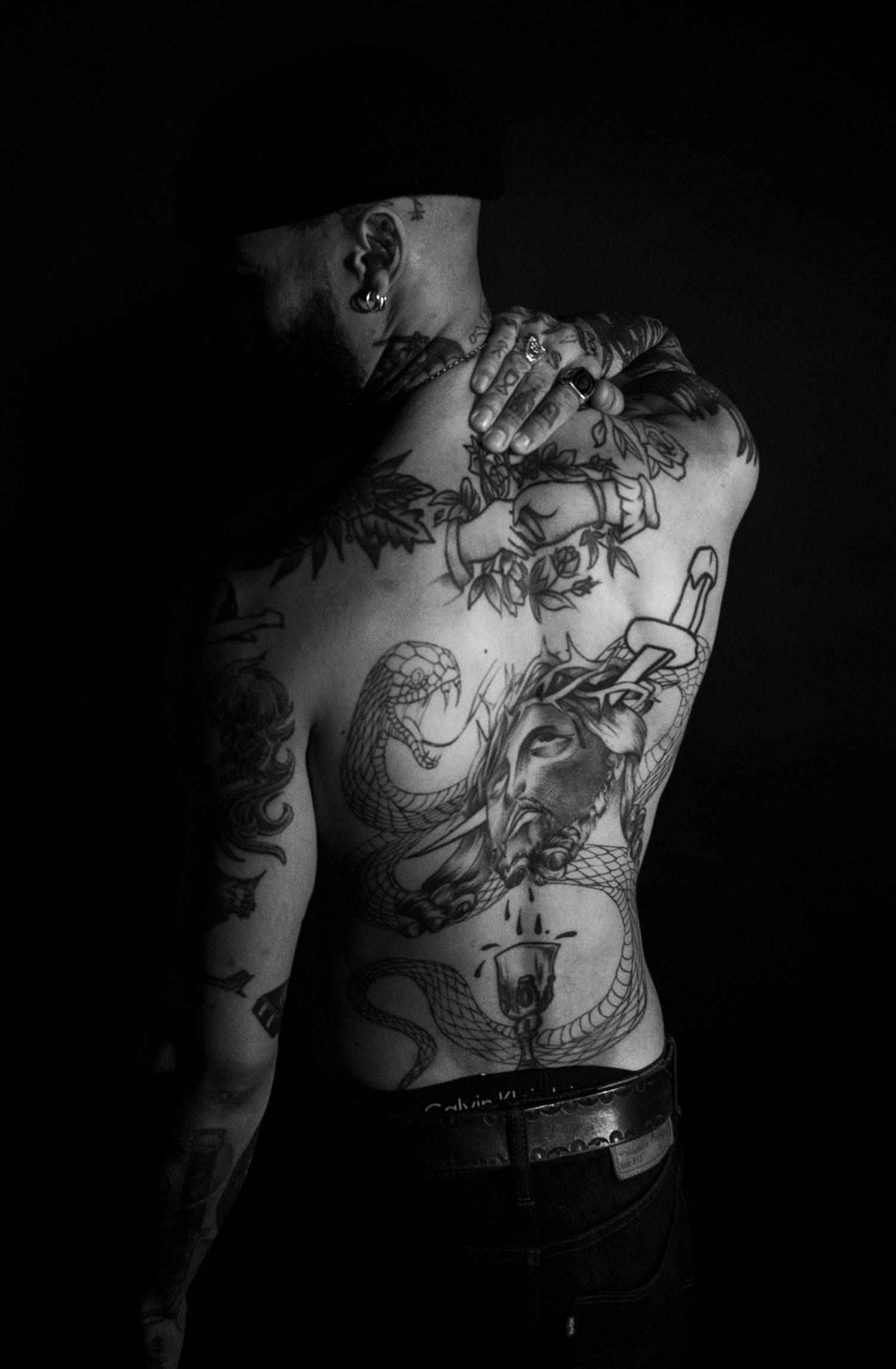 Another snapshot of tattooist Musquet, captured by Lukey Pamment.

You are heavily tattooed. When did you get your first tattoo?

I started getting tattooed when I was 17. I‚Äôve always wanted tattoos, as long as I can remember. But my mother wanted me to wait until I turned 18, so I waited, and I did it two weeks before my birthday at a friend‚Äôs place. I would not see myself without tattoos; it‚Äôs always been on me. 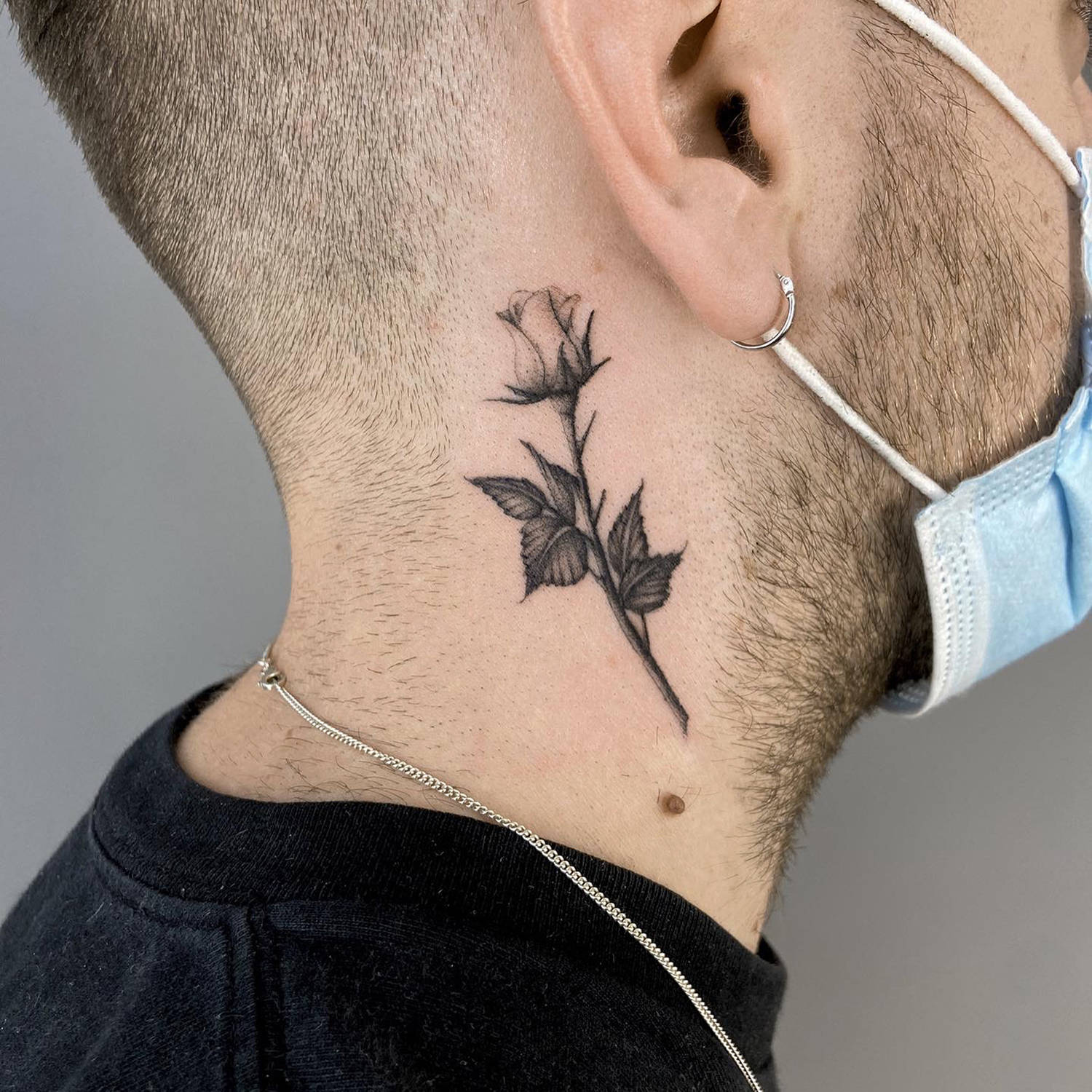 The classic rose is a recurring theme in the artist‚Äôs portfolio.

Have you convinced your mother to get inked?

My mother forced me to tattoo her about three years ago. I didn‚Äôt want to do it because the idea of hurting her and making a mistake on her was too stressful. But we ended up doing it, and now she wants another one.

You grew up in France and the Caribbean Islands. What were you like as a child?

I‚Äôve always been a hyperactive kid. I couldn‚Äôt stay in one place. So, I was doing a lot of sports and hikes with my parents. I grew up mainly in the countrysides, so it was perfect; I was like a wild animal! (Laugh). 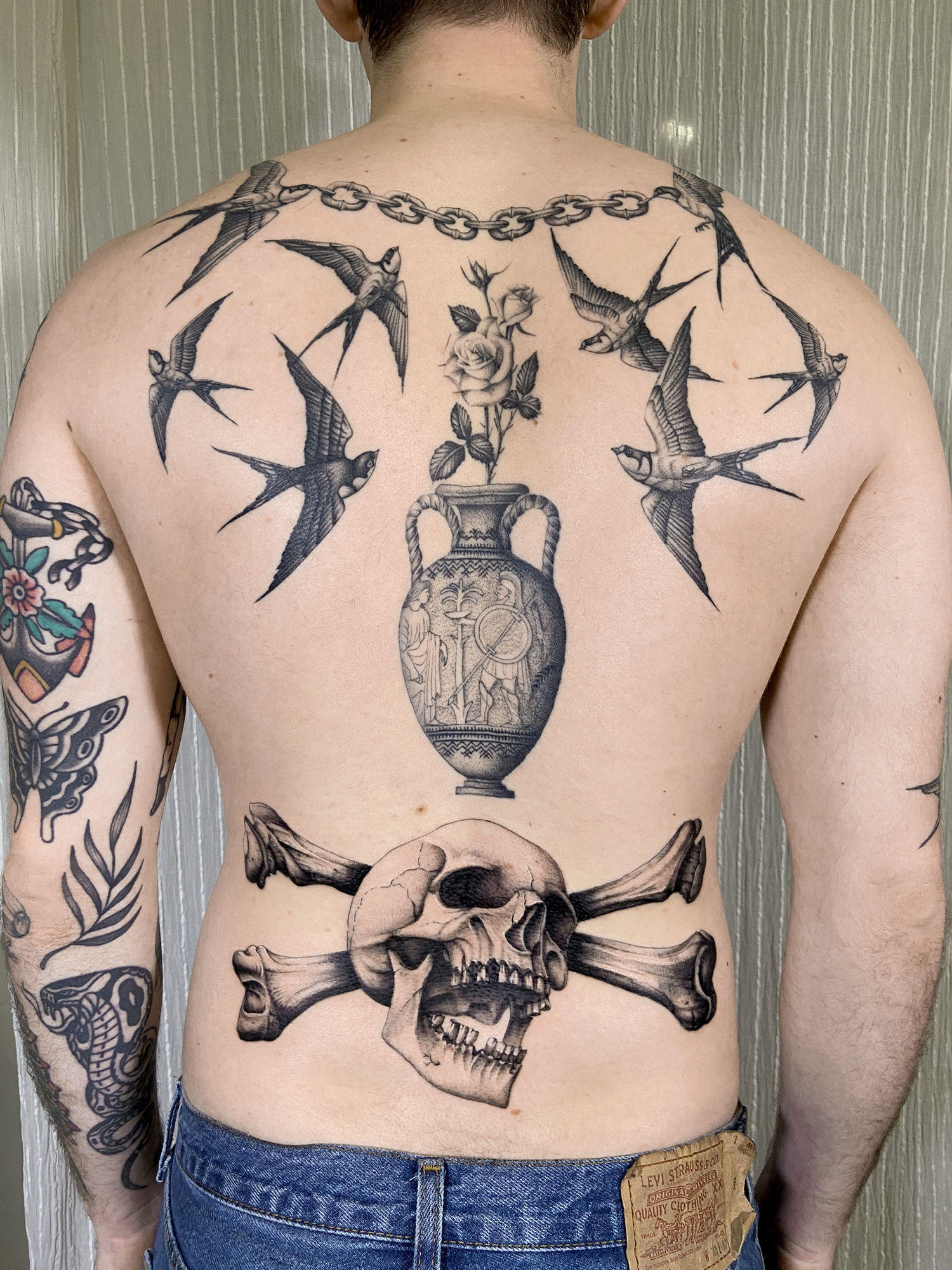 A combination of line and dotwork to form this elegant back piece.

What led to you starting a tattoo career?

My passion for it, I was already heavily tattooed before I started tattooing. I just wanted to tattoo my friends and me for fun.

When and why did you move to London?

I moved to London in 2011; it will be ten years at the end of this year. The reason why I moved was that I was young and needed to travel to grow up. I‚Äôve always believed that travelling was food for the brain. And it‚Äôs just important to see around to know who you are (i.e., for self-discovery).

London is the only city I would live in for the moment in Europe. All the opportunities this city is offering are incredible. Because this is more than a city, it is eclectic, and there is so much culture.

You work at the reputable Sang Bleu Tattoo London. Who invited you to the studio?

I was modelling for Sang Bleu for a shoot or two, and I‚Äôm not sure if Maxime [Plescia-B√ºchi] found me on Instagram or through the job, but he then offered me to come guest in one of the shops. But funny enough, it was just a week before I went guesting in the Sang Bleu of Zurich as the shop manager from there invited me before him. So I then did London happily a month later! 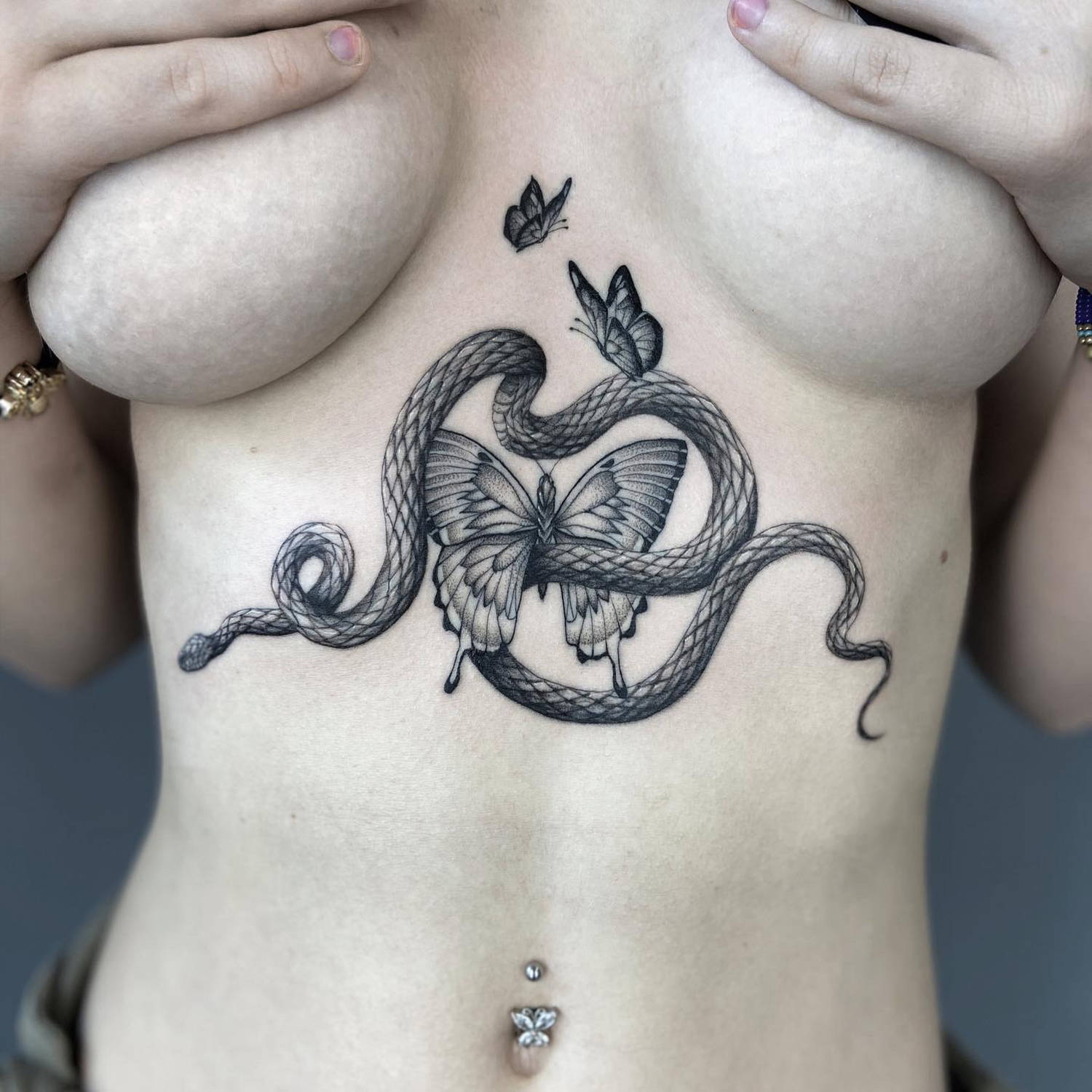 Good placement is one of the artist‚Äôs strong points.

How do you create your artwork: a) By memory and draw, or b) do you use photo references?

I do many drawings for my tattoos, so most of it is by memory, but I‚Äôm also using many references. I‚Äôm trying to mix both a lot, so I keep some sense to my work.

I love to find references from antique imagery; it could be from old books, photos, or even engraving on furniture or anything looking cool to me. 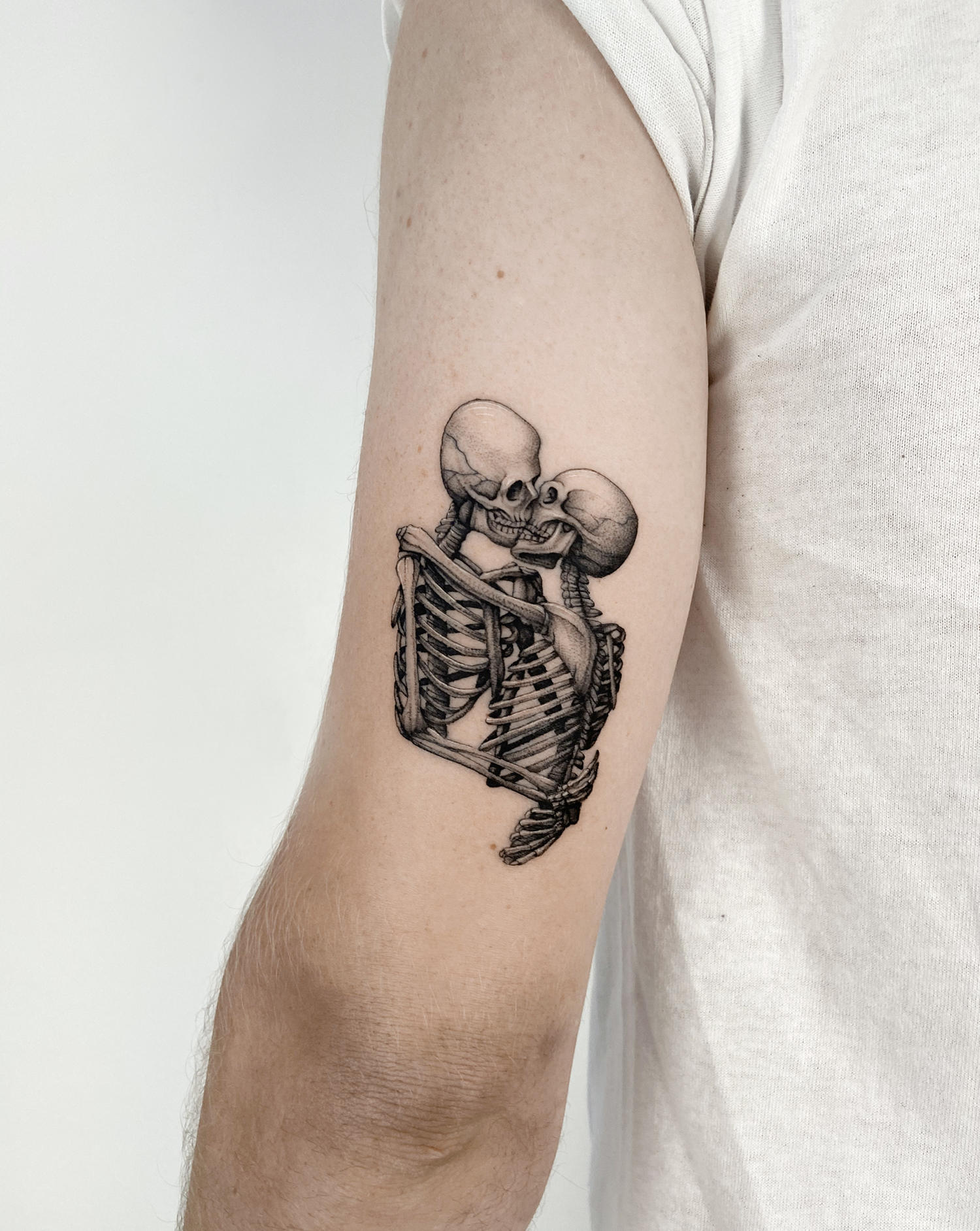 The fragility of life and love depicted in this tattoo.

I see prison-style tattoos influenced in some of your work, more redefined, and with a European mix. Am I far off?

I don‚Äôt have strong influences on anything anymore. For a while, I was influenced by French prison tattoos, as I found [identified] myself in them a lot. While starting tattooing, many people are trying to find their ‚Äútattoo identities,‚Äù and mine was French prison tattoos. Mainly, I‚Äôve always been into timeless art, which could be architecture, paintings, tools, or an antique lookalike. The beauty of antiques is that they are not affected by the passage of time or change trends, and they have always interested me. So I‚Äôm trying to reproduce the same feeling with my art; I‚Äôm trying to produce something timeless. That will never age or get out of trend and not restricted to any particular time or date. 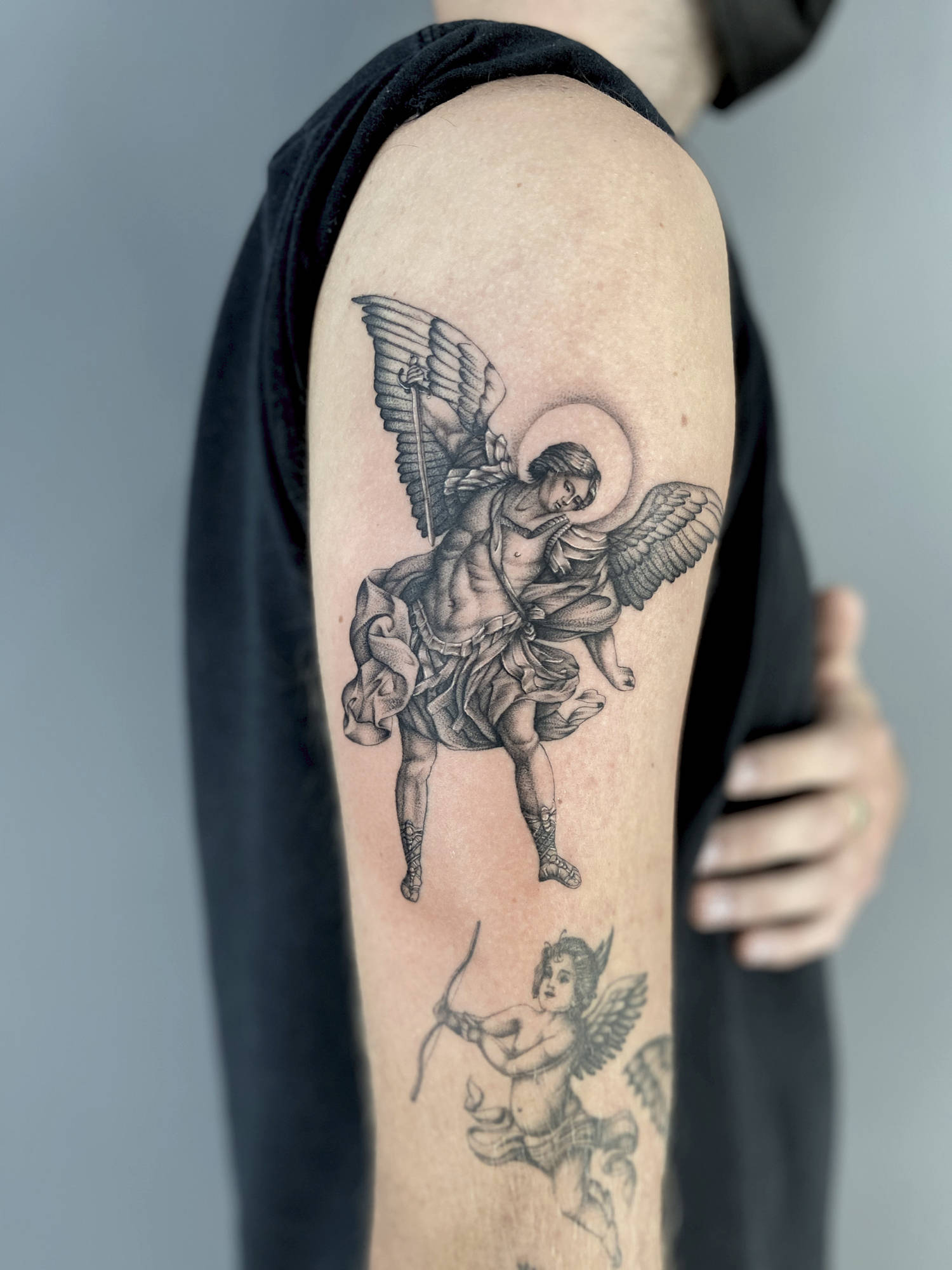 Do you collect antiques?

I used to collect a lot of stuff, but I stopped. I used to collect knives, coins, and anything religious I could find, like crosses, little wooden Jesus Christ, or Marie. When I was young, for quite a long time (laugh), I never left churches without taking something with me.

And you weren‚Äôt worried about getting caught by a cop?

Not at all; it was purely innocent. I was a passionate little collector. 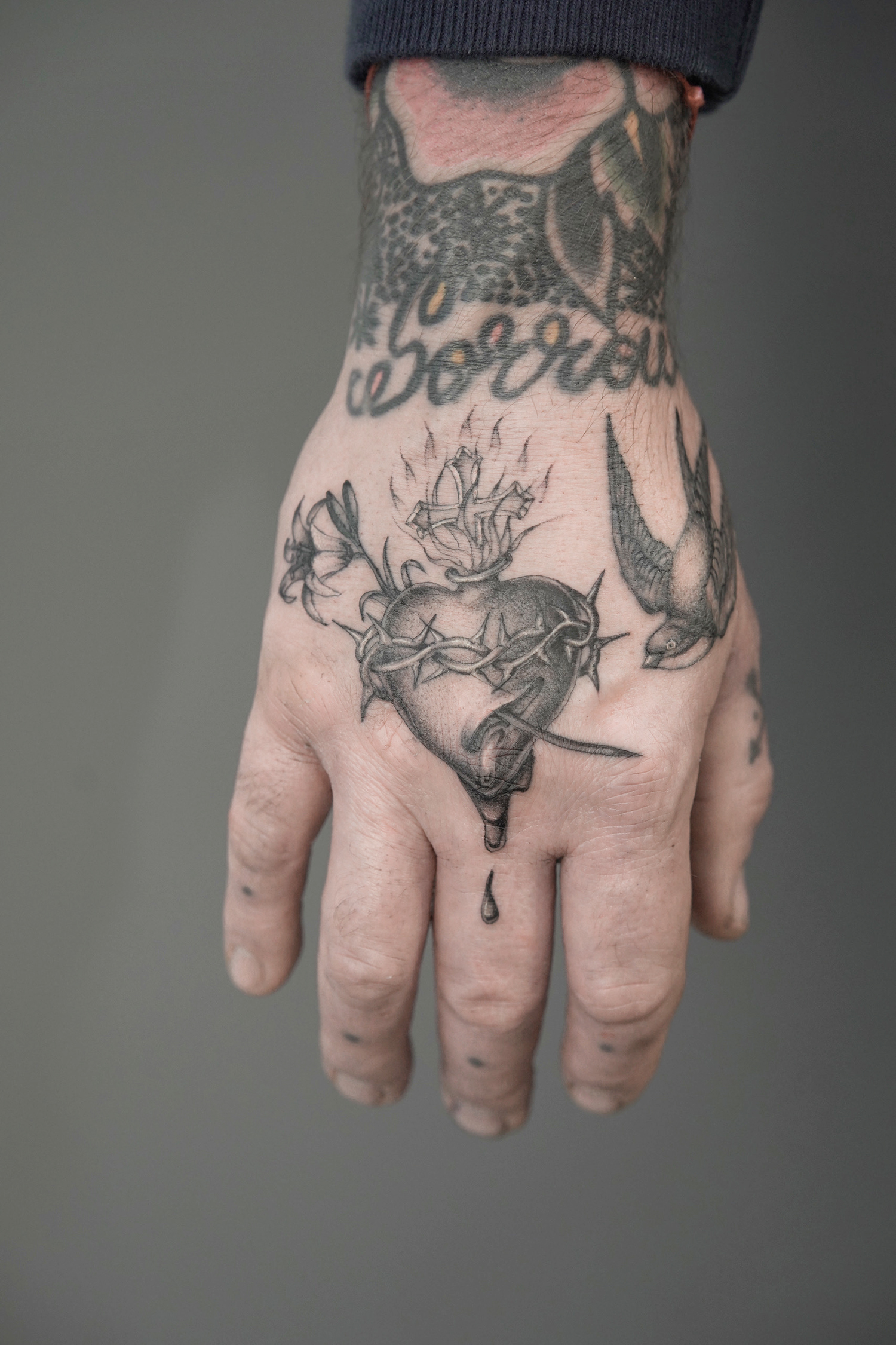 You have done several religious symbol tattoos. Did the client suggest it, or did you get inspiration from those church days?

Both religious tattoos are a recurring theme. So, of course, I‚Äôve done them the way I‚Äôve imagined them and got inspired by them through the years. 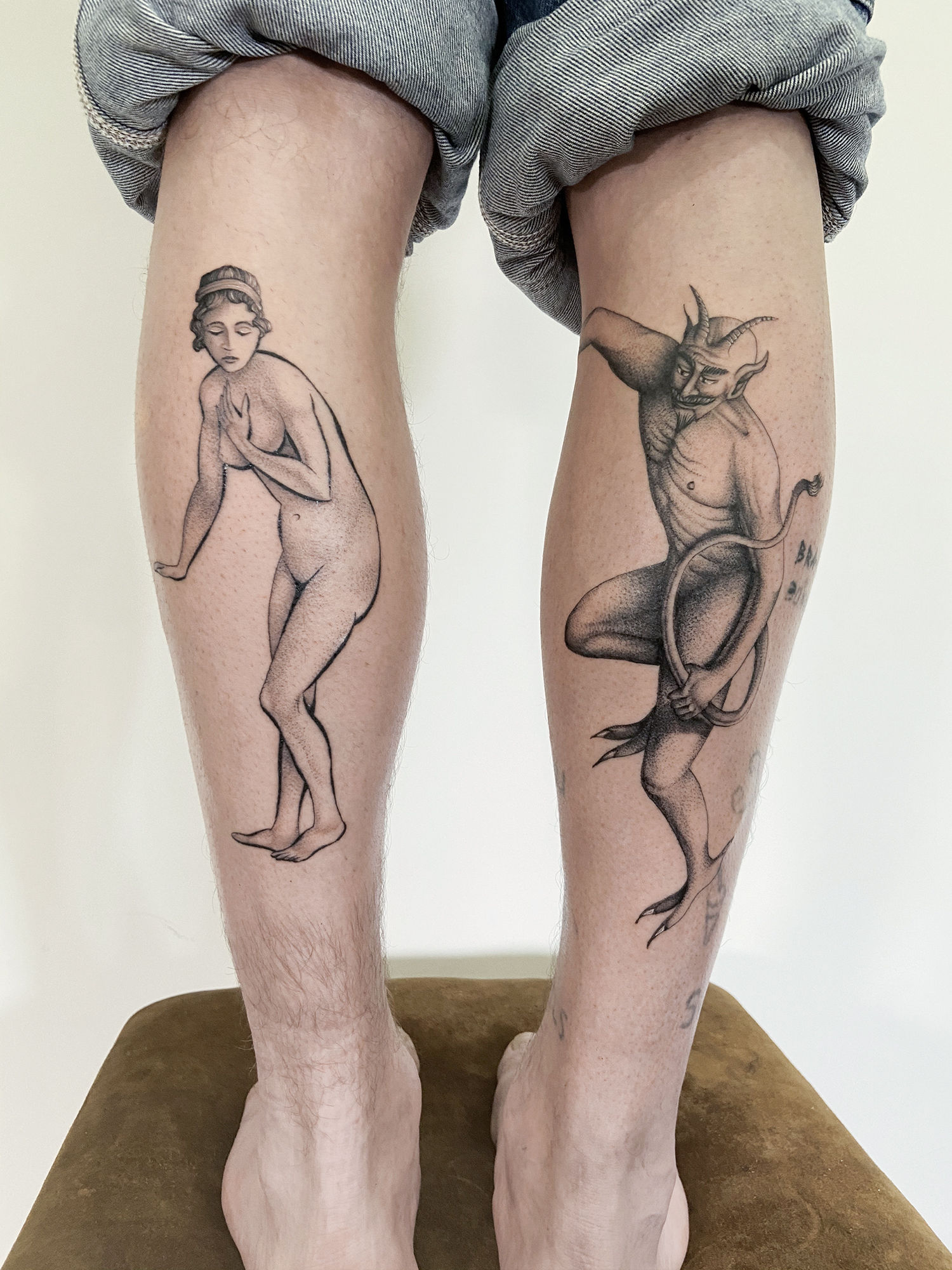 Musquet‚Äôs tattoos are common in black ink with white highlights.

Not only are you a tattooist, but you are also a photographic model. Tell me how this came about, and what was your favorite session?

London, definitely London. This city provides anything you‚Äôre expecting or not, as for me: modelling. You will meet someone that finds you attractive and offer you a modelling job, and that‚Äôs it, from there you‚Äôll get two more jobs which will lead to even more. It‚Äôs easy money, making you feel good about yourself, especially when you‚Äôre not self-confident. It taught me to be comfortable in front of cameras.

The most impressive one in terms of budget and exposure was Dr. Martens. It was over two consecutive days, and the setup was massive as we were more than ten models shot simultaneously and then individually. Unexpectedly people saw my face everywhere after that, from tube stations in London to billboards in Tokyo. It was really weird to wait for a double-decker bus, and when the bus shows up, you‚Äôre [face is] on it three-times your actual size! It‚Äôs hard to hide from it! 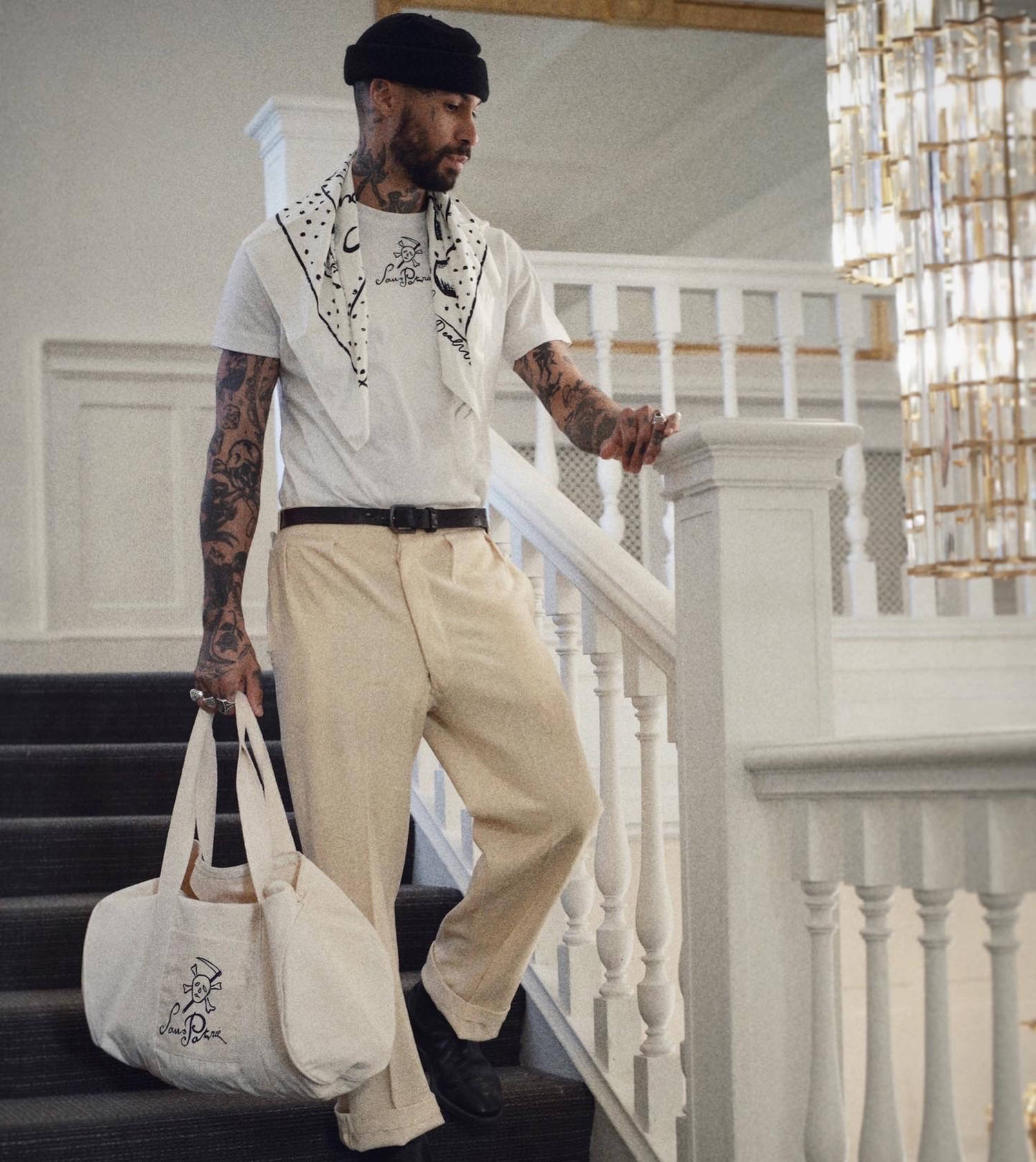 A glimpse at the latest San Patrie fashion collection.

And you have your own apparel line.

Yes, it is called ‚ÄúSans Patrie‚Äù‚Äî built on the aesthetics of the ‚ÄúFrench Prison Tattoo‚Äù culture; this culture was created at the beginning of the 20th century by convicts and deserters. So the art [on the clothing items] is raw and poetic. Therefore we‚Äôre trying to reproduce these feelings in the garments. With some looks of French workers and convicts, the brand is inspired directly from the ‚Äô50s.