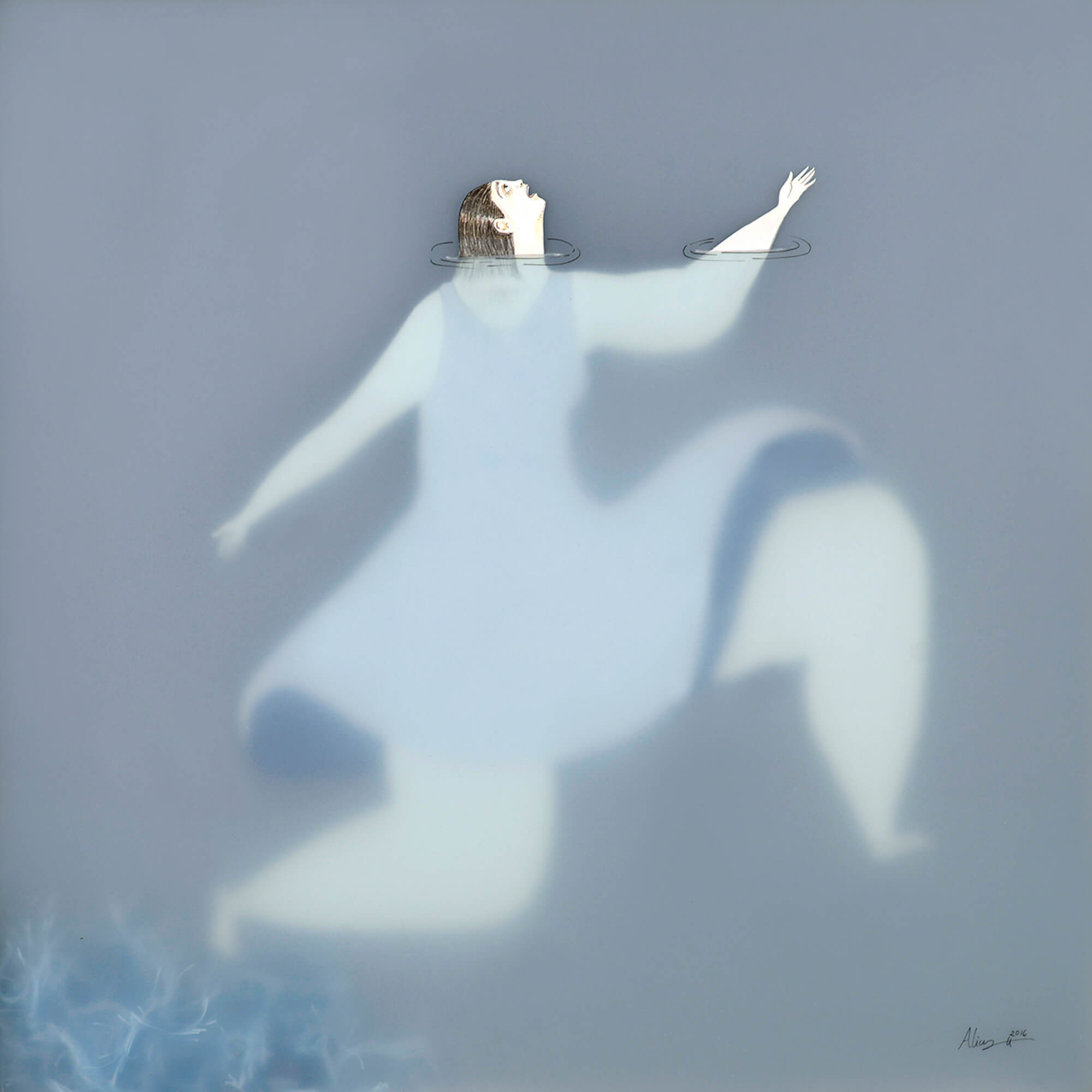 In Stephen Sondheim’s critically-acclaimed musical Into the Woods, characters from several iconic fairy tales are intertwined as they each venture into the one place they’re all unsure ofāthe dark woods.

This is the place where Cinderella, Little Red Riding Hood, Jack (from “Jack and the Beanstalk”) and others have to leave their comfort zones and take risks in order to get the things that they really want.

Sondheim isnāt the only one that has viewed nature as a metaphor for the problems we humans face and the solutions they inevitably require. Artists and illustrators have also equated nature with the things that trouble us. Some of the most intriguing works useĀ it as a mirror for whatās going on inside our heads. Sonia Alins does just this in her series āDones dāaigua II.ā Here, her characters are simultaneously above and below the water. You get the sense that theyāre trying to get what they want, but when they get it, will it satisfy them? Just like Cinderella and her Prince Charming, nature will help them figure it out.

Here are 10 illustrators that approach nature in a complex and intriguing way. 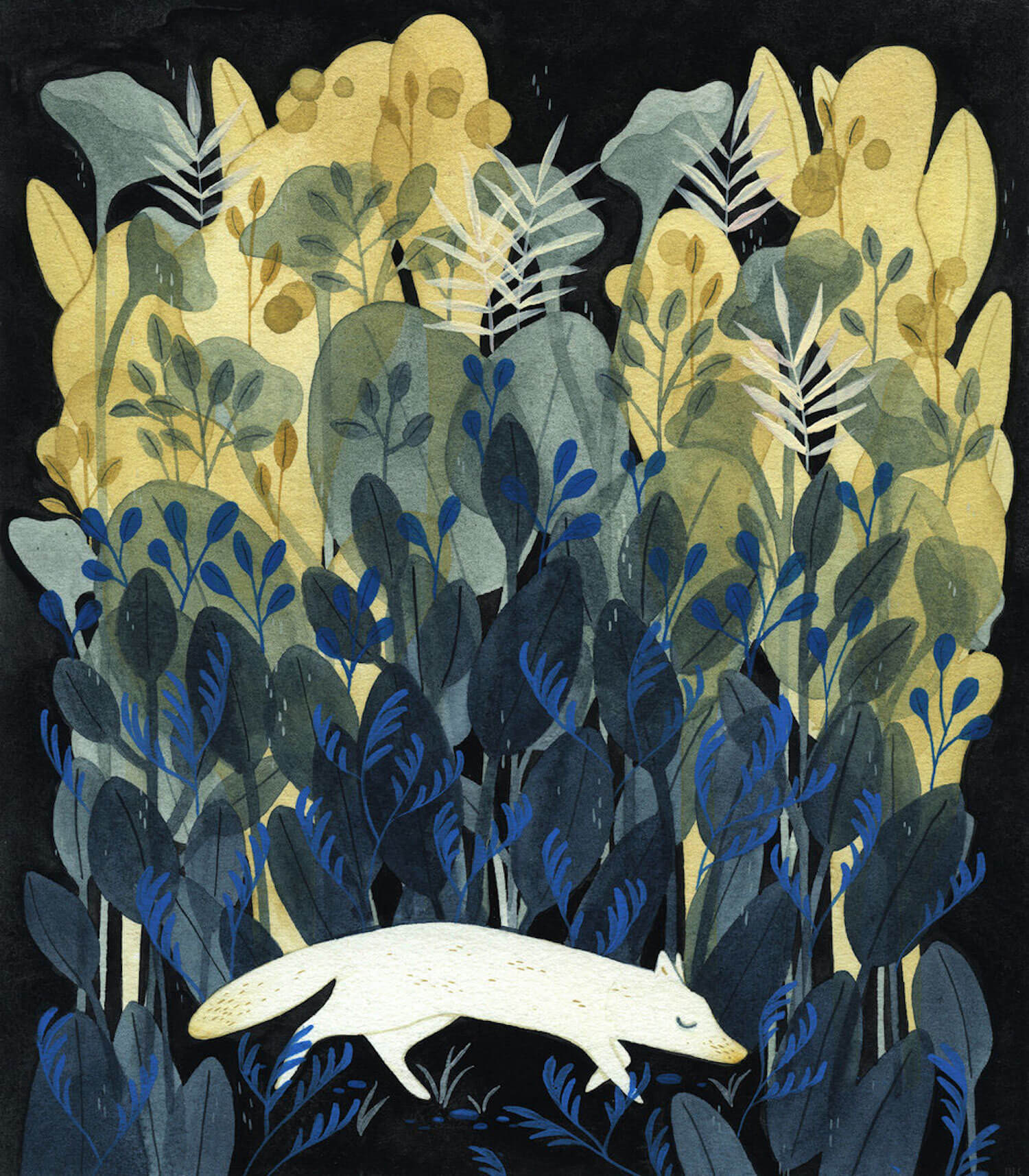 Artist Maggie Chiang depicts a dreamy-yet-stylized idea of the outdoors in her watercolor paintings. āInspired by both places real and fictitious,ā her website states, āMaggie’s illustrations evoke a longing for adventure and the pursuit of the unknown, exploring impossible landscapes and places unseen.ā ContemplatingĀ the ārelationship between humanity and nature,ā the paintings represent grandiose scenes. Often, these settingsĀ are accompanied by a person. Their scale, however, pales in comparison to the seemingly endless locale. It reminds us that against the backdrop of nature, weāre simply a blip on the radar. 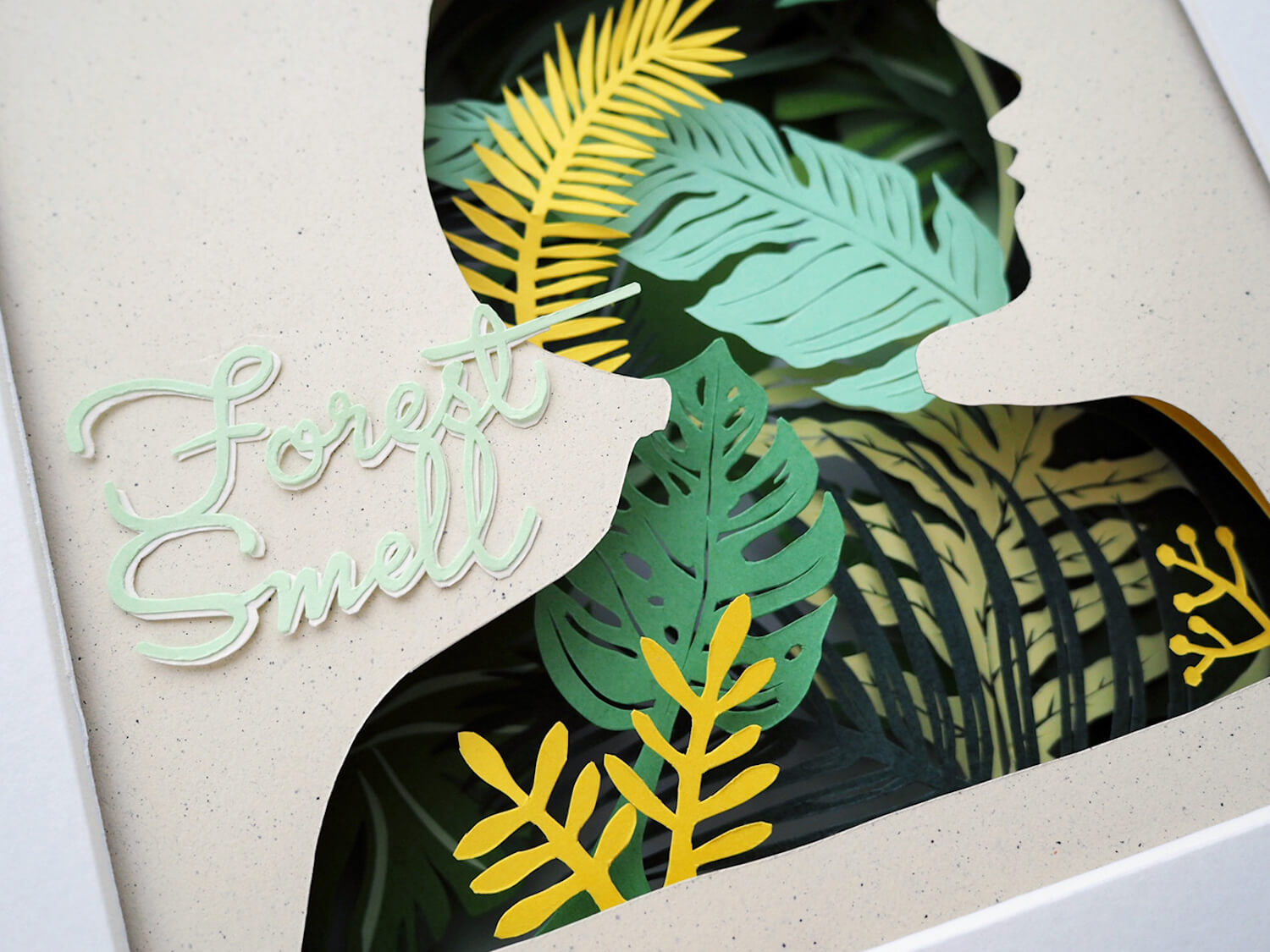 Every part of this piece by Chao Zou was hand cutāeven the type.

Aroma is the inspiration for designer and art director Chao Zouās paper craft project called āForest Smell.ā āMy wife sprayed herself with my perfume,ā he explains, āwho [wore] the [smell] of the forest for all dayā¦ā To commemorate this pleasant feeling, Zou created a shadow box illustration. Layers of paperācut as leavesāfill the silhouette and create an unconventional love letter. This isnāt the first time that Zou has produced cut paper creations. His intricate, 3D works have also appeared in advertisements in China. 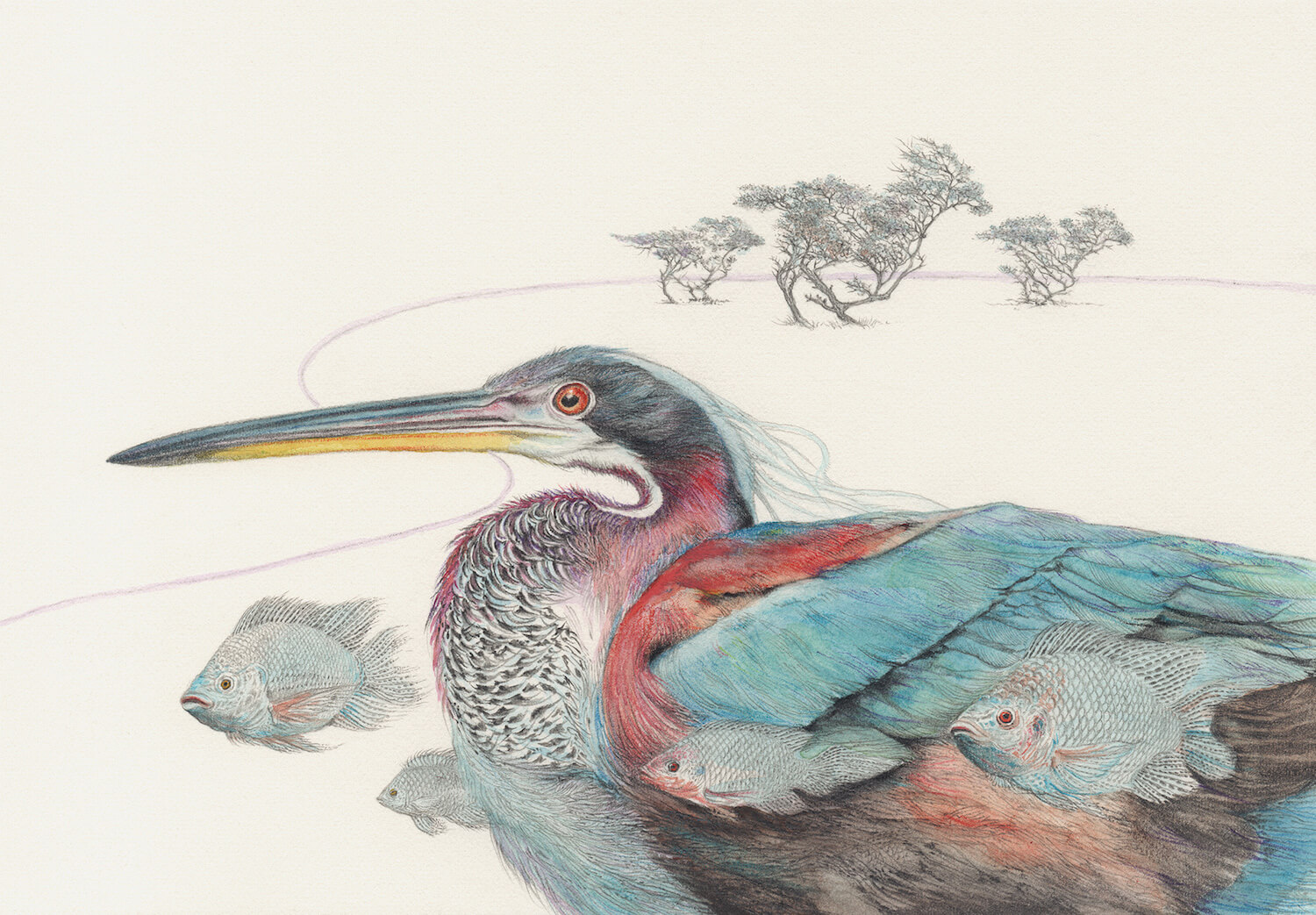 āRiverā is a triptych originally created as part of a 2017 calendar.

Colombian artist and illustrator Alejandro GarcĆ­a Restrepo typically works in monochromatic black and white, but for āRiver,ā heās ventured into the world ofĀ color. Crafted usingĀ colored pencil and watercolor, this image represents the forces of water. āColombia is a country privileged by the abundance of water resources,ā he explains. This has positive effects for the future of sustainable energy in the country, including āmaking possible the development of agricultural, tourist, and environmental projects.ā 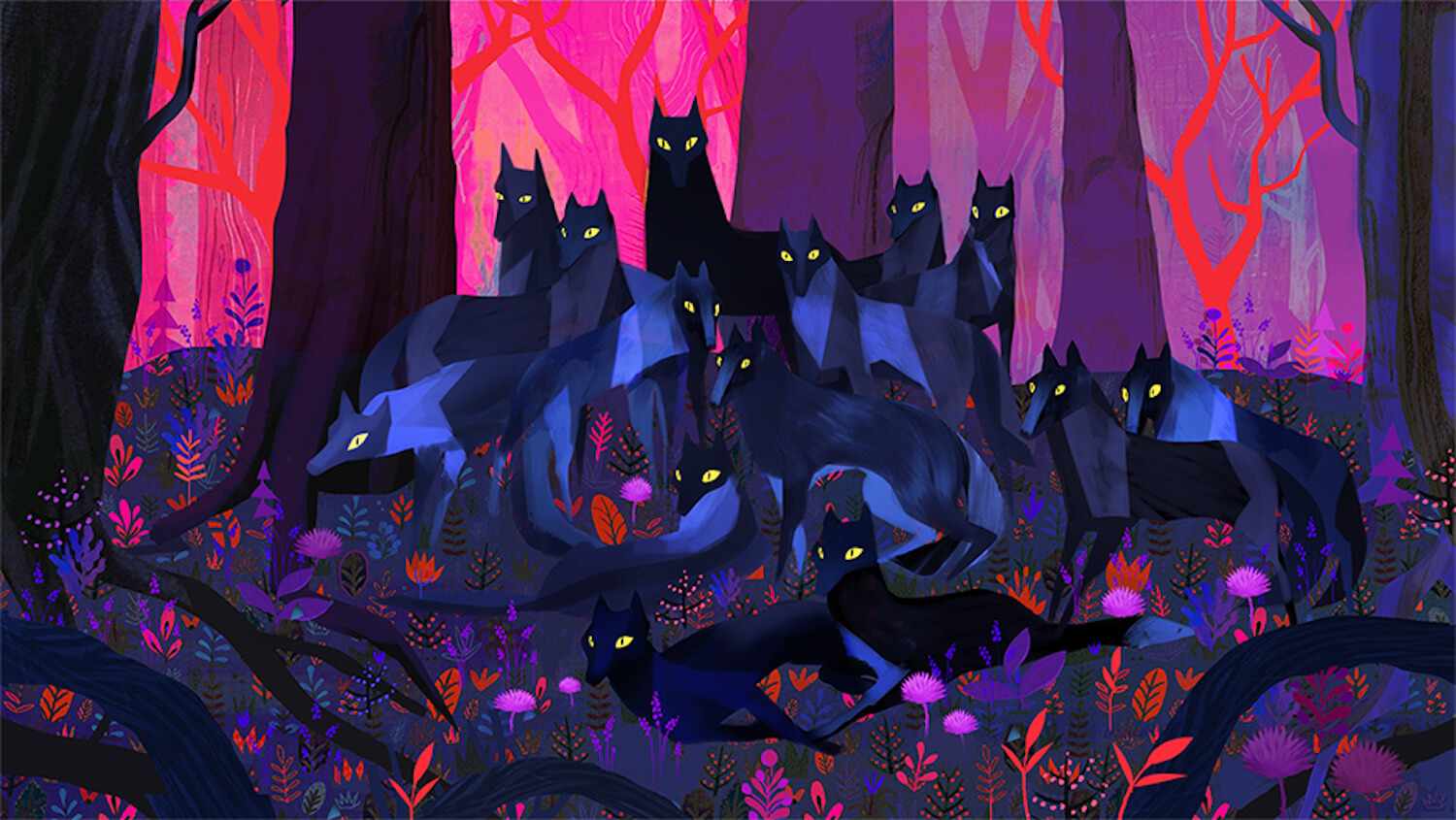 The woods is a common setting for Juliette Oberndorferās concept art.

French-born, Canada-based concept artist Juliette Oberndorfer creates landscapes that have a mystic glow. Clad in brilliant neon hues, the sky is seemingly on fireājust like the eyes of these wolves. Oberndorfer’sĀ striking palette choice extends beyond just this image. Her entire portfolio features this enchanting use of these jewel-toned colors, and their intensity is also seen in her experimental animation called āLux.ā 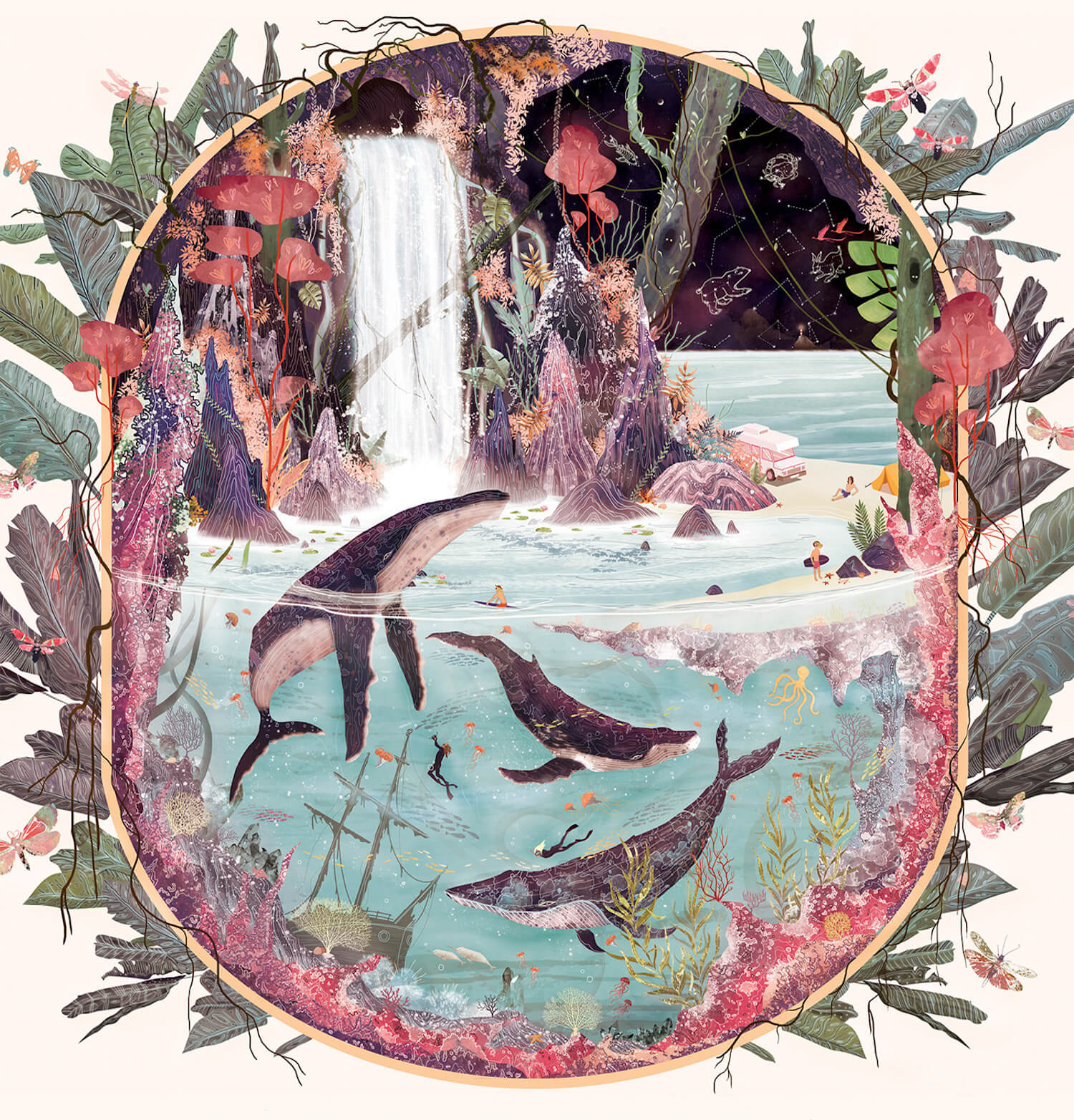 Svabhu Kohi has found a kinship in music. He’s also created album artwork for other musicians.

Using nothing but digital tools like Adobe Photoshop and Illustrator, Svabhu Kohli creates scenes that have a painterly appeal. This particular piece seems to build off another ocean-centricĀ illustration he produced in 2015, but Kohliās latest iteration is a lot more detailed and full of visual depth. Despite the thematic similarities between the two, theyāre born from completely different assignments. This imageĀ was used as artwork for musician Ziggy Albertsā Summer Tour 2016. 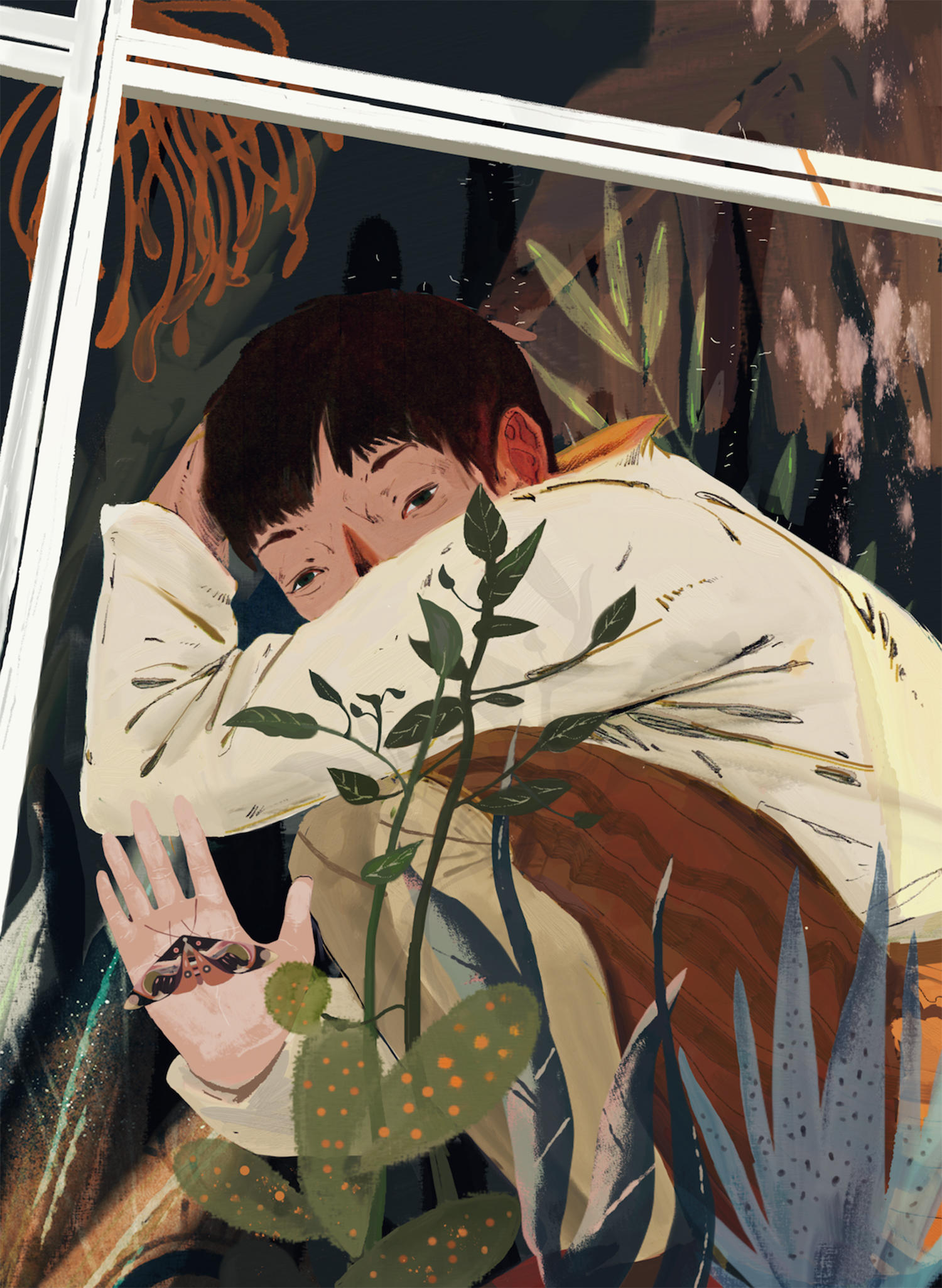 A single moth is enough to overwhelm the character in an illustration by Nix Ren. Trapped behind glass, he shoves the creature up to the pane as he covers half his face, obviously disturbed. Its tiny body acts as an ominous sign, like those who pass should understand the truth of what this place really is. This foreboding opinionĀ of the landscape is seen in Renās other works, where humans contend with natureāsometimes, they control it, while other times, it has conquered them. 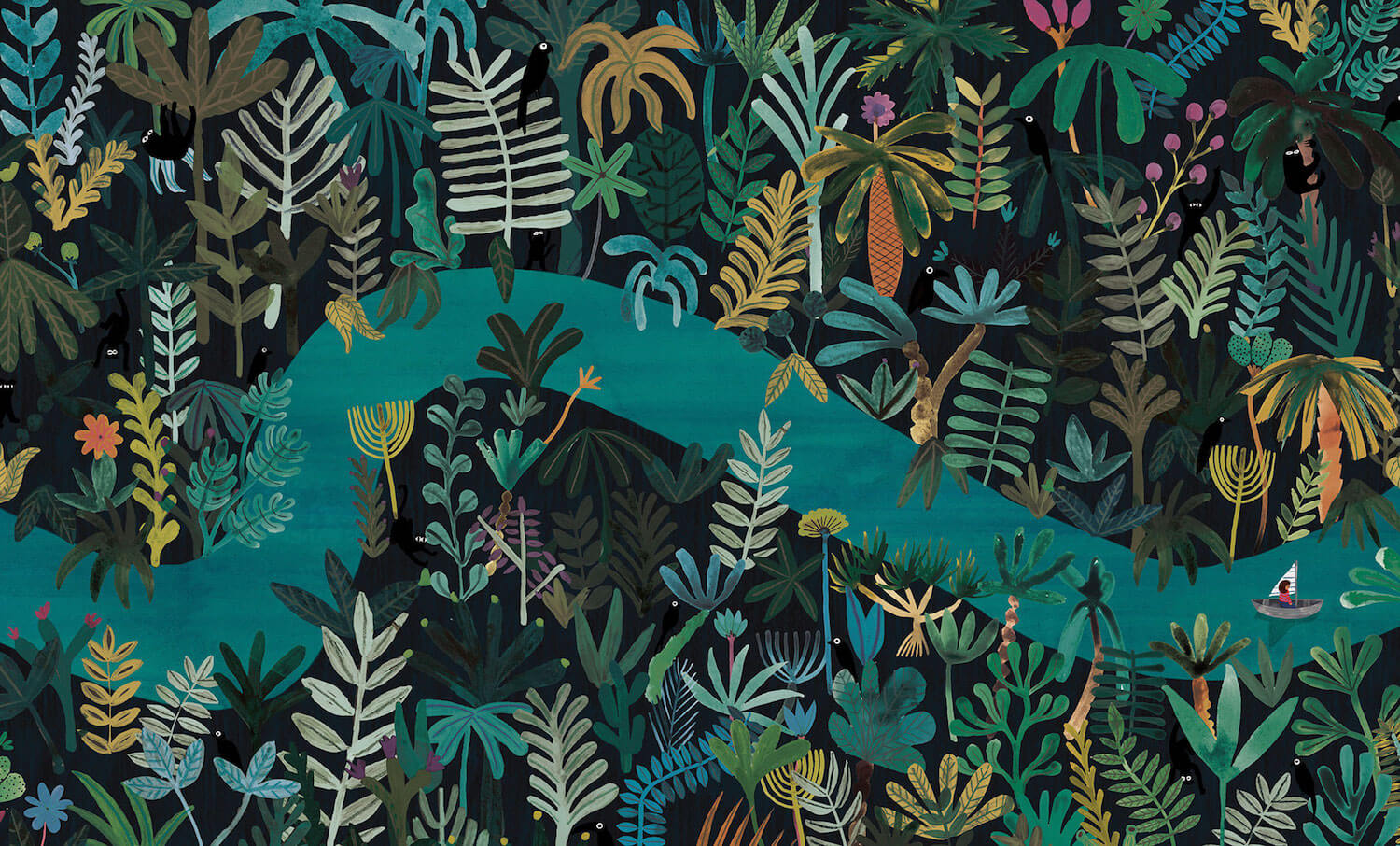 āThereās a river outside my window. Where will it take me?ā Thatās the question behind Melbourne-based illustrator Marc Martinās book āA River,ā and a very similar image (like the one above) graces the cover. āSo begins the imaginary journey of a child inspired by the view outside her bedroom window: a vast river winding through a towering city.ā Throughout it all, a small boat guides the way through other fantastical landscapes. This is the newest of Martinās five books, all of have to do with nature. 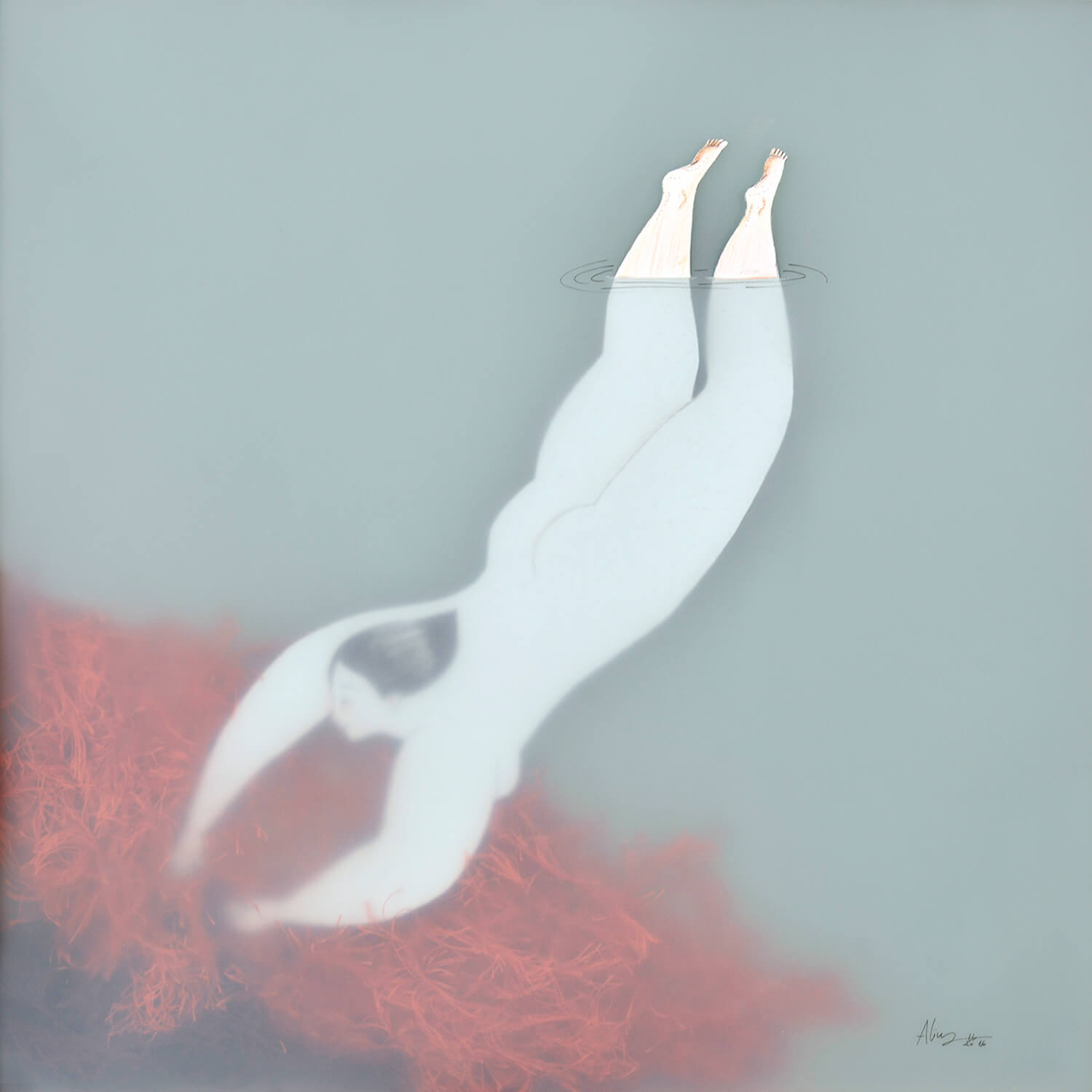 Spanish illustrator Sonia Alins places women in the water forĀ her series called āDones dāaigua II.ā Using an overlay, hazy effect in her work, she obscures the majority of the images, trapping her figures in a liminal space that represent fears, feelings, and desires. To Alins, āthe idea of transparency and blurā establishes ādifferent levels of perceptionā and explores how these various emotions play off one another to reveal themselves at different moments in time. 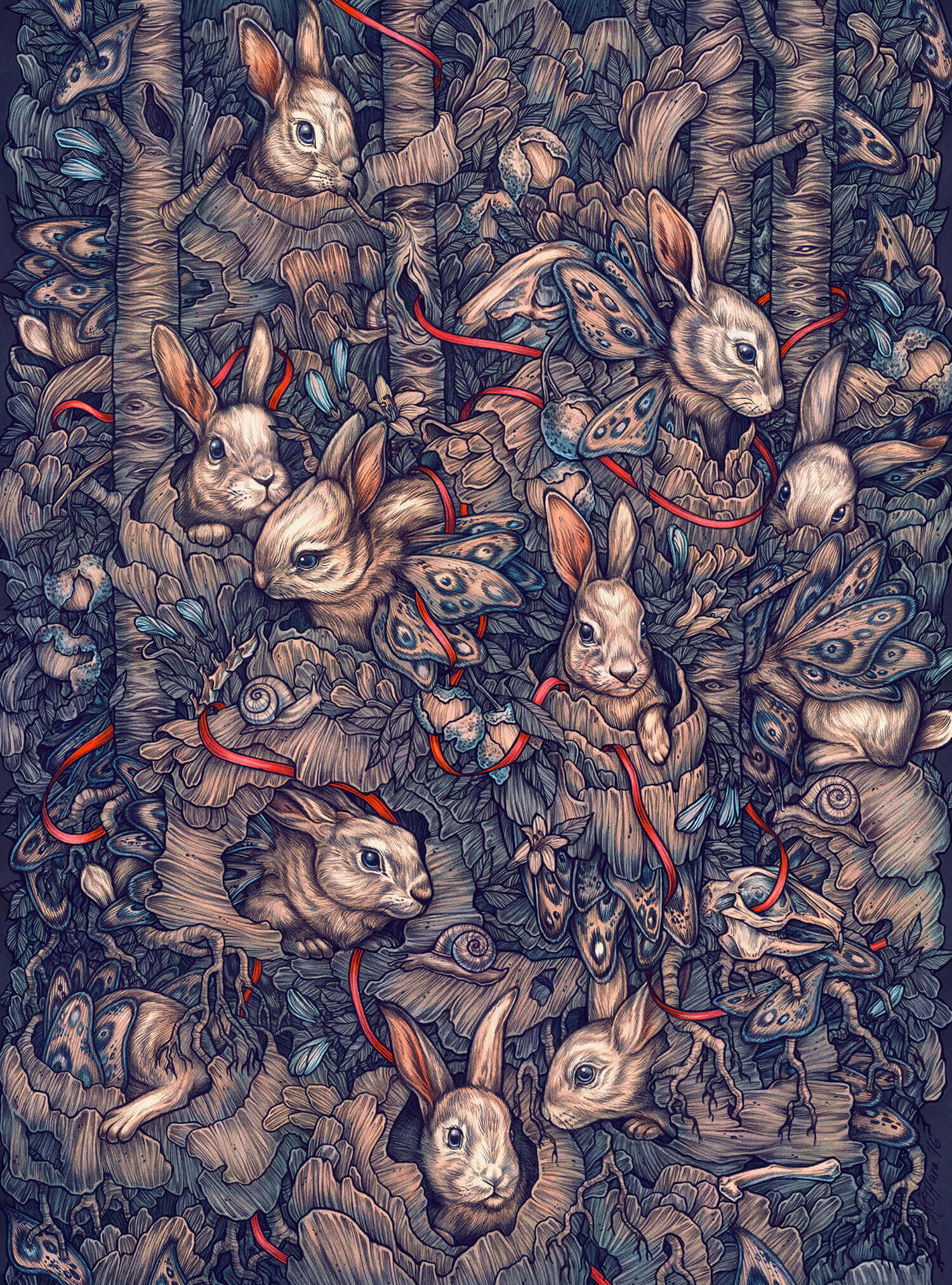 Kate OāHara has made a name for herself by drawing nature-inspired illustrations in stunningly intricate detail. This particular piece was first created in her subconscious. āāBunnerfliesā is from a dream Iāve had of rabbits, who through contraction of a parasite or some mutation, have begun to sprout butterfly wings from all over their bodies,ā she explains. āAlthough painless, the process renders them mostly immobile, so they sit in their warren and wait patiently. In my dream Iām not sure whether the change is fatal, or if they will emerge as some other creature at the end of their evolution.ā 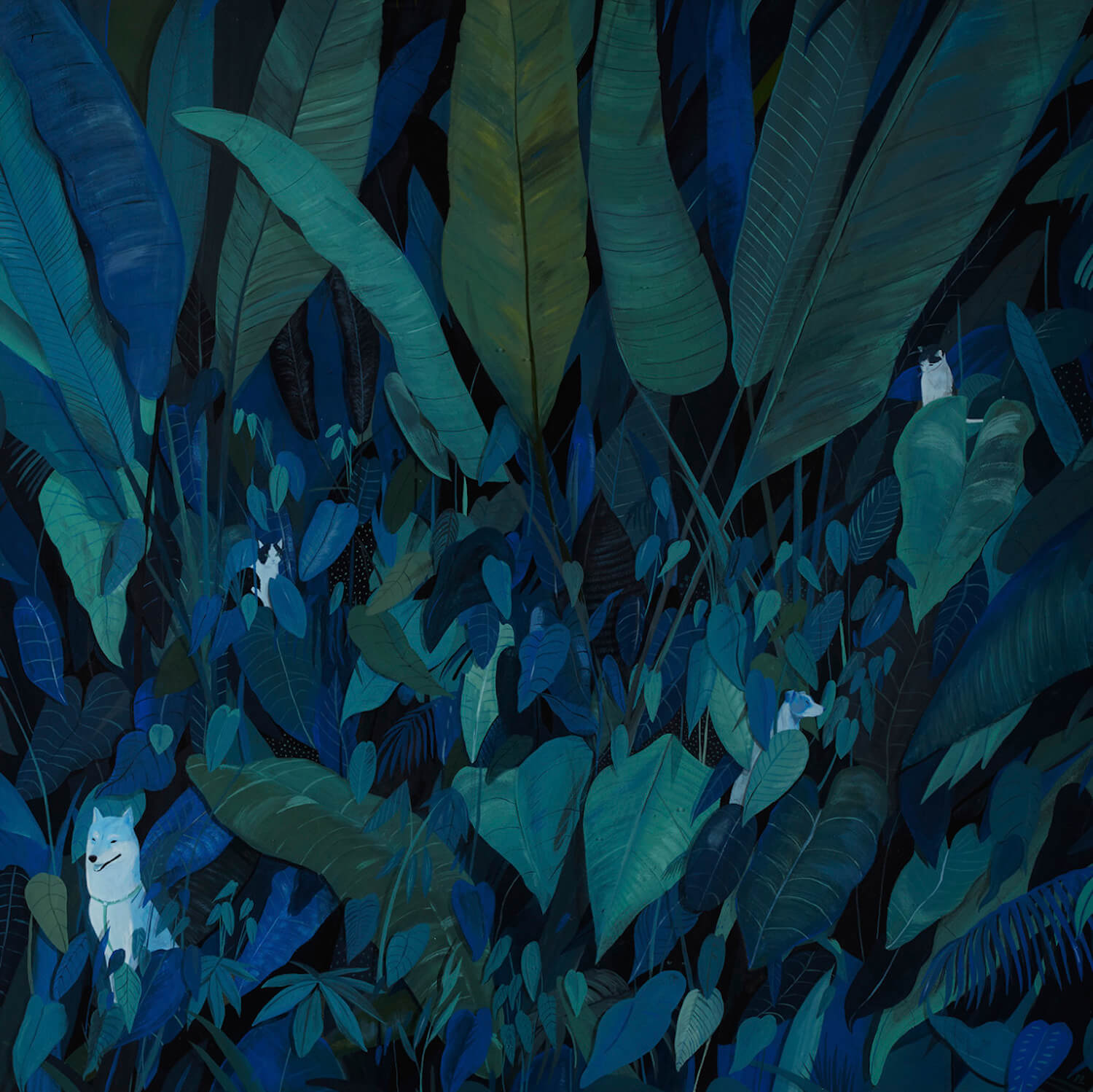 To produce this luminous piece, Robert Bowers painted resin and acrylic on panel.

For over a decade, Robert Bowers has refined his painting technique āwith the wild world a common theme over this time.ā He depicts colorful, lush landscapes that have some surprises hidden within; look closely and you’ll find animals hidden behind the huge leaves. This is a common theme in his work, which varies in size. Some pieces are massive murals that spread across the walls. Other pieces, Bower writes, are āthe size of a postcard.ā Regardless of their scale, each āstill present the same amount of detail.ā