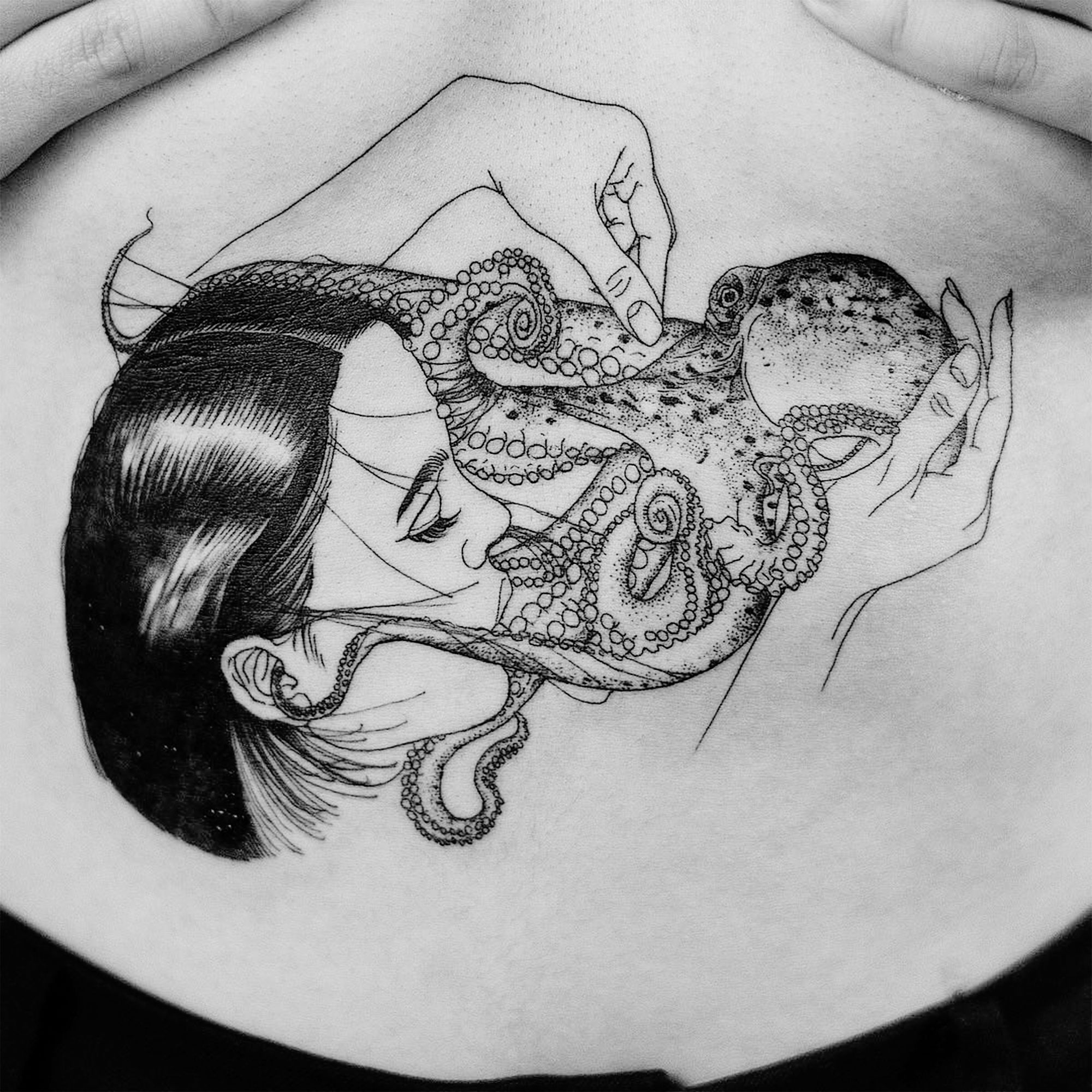 In the past several years, South Korea has¬†becoming a powerhouse for great tattoo artists. But technically, their practice is considered illegal in the eyes of the South Korean government.

Why is this? The reasoning makes sense, but doesn‚Äôt reflect the current state of tattooing. Basically, tattoos¬†are seen as a ‚Äúmedical procedure‚ÄĚ that should be performed by a doctor, not an unlicensed¬†artist. ‚ÄúIt’s invasive,‚ÄĚ explained Korea Medical Association spokeswoman Ahn So-Young. ‚ÄúThe skin is punctured and it bleeds. That’s why we look at it as a medical procedure.‚ÄĚ To them‚ÄĒand rightfully so‚ÄĒthere is a risk of disease from improperly sterilized needles. The government has, however, began to look into the possibility of reversing the law by studying tattoo shops.

Despite the illegality‚ÄĒincluding random raids and health department fines‚ÄĒtattooing continues to thrive in South Korea. Professional artists and K-pop stars wear them, which has began to turn the tide of public opinion. Tattoos are becoming less associated with organized crime and more mainstream. You‚Äôll notice that much of the body art is smaller in size. That way, it‚Äôs easily concealed if necessary.

Above: OOZY describes this tattoo simply as “love octopus.” 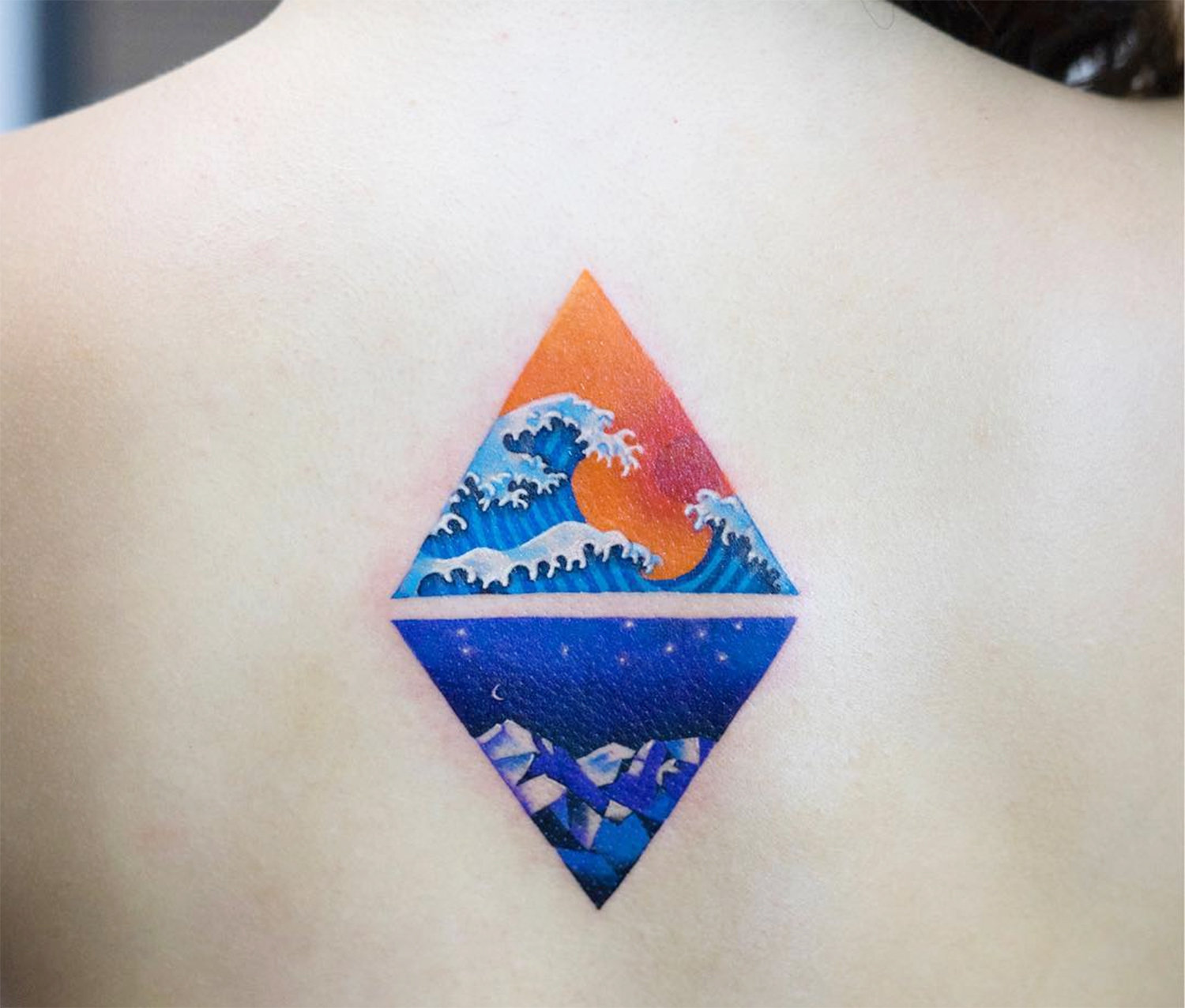 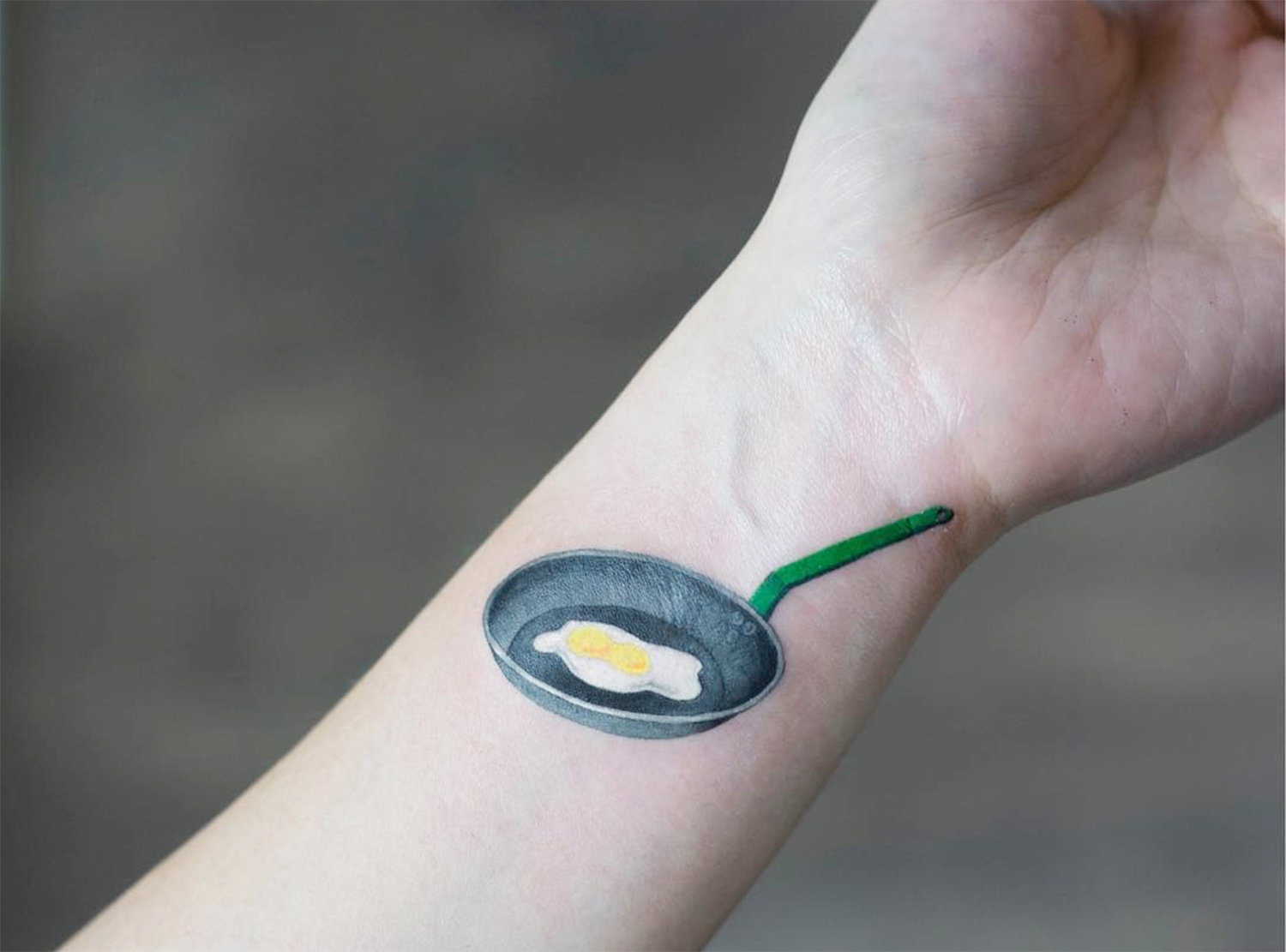 In addition to a simple fried egg, Zihee pays reference to the iconic painting, “The Great Wave Off Kanagawa.”

Seoul-based artist Zihee crafts small, colorful pieces that avoid using any line work. Rather, the¬†bold pigment defines geometric-inspired shapes. As a result, they‚Äôre simultaneously minimalist and embellished; the details are often sparse, but each tattoo is completely filled‚ÄĒthey’re a feast for the eyes. Some of her most unusual tattoos involve placement; they wrap around the ears and onto the lobe, or are a permanent set of earrings. 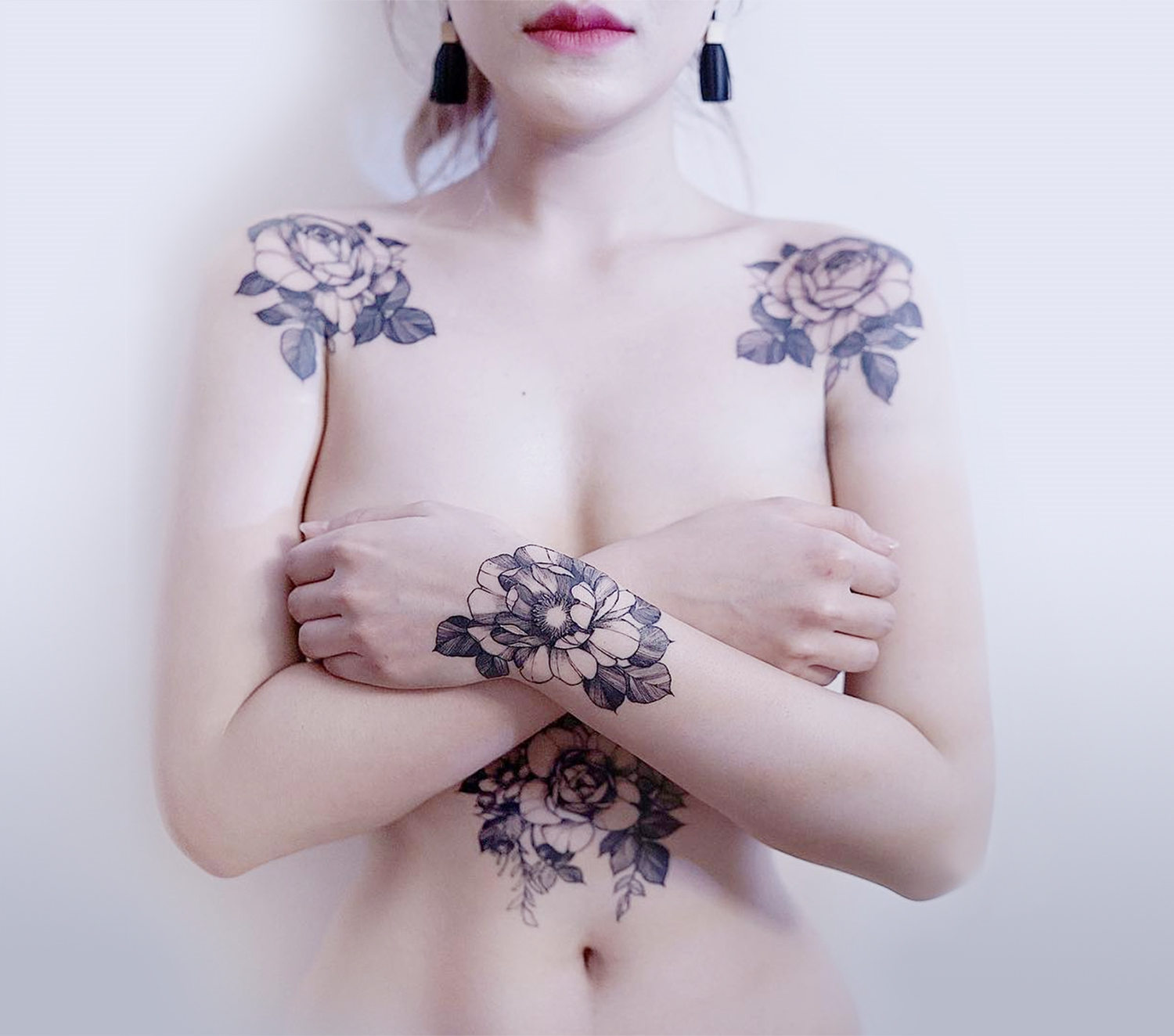 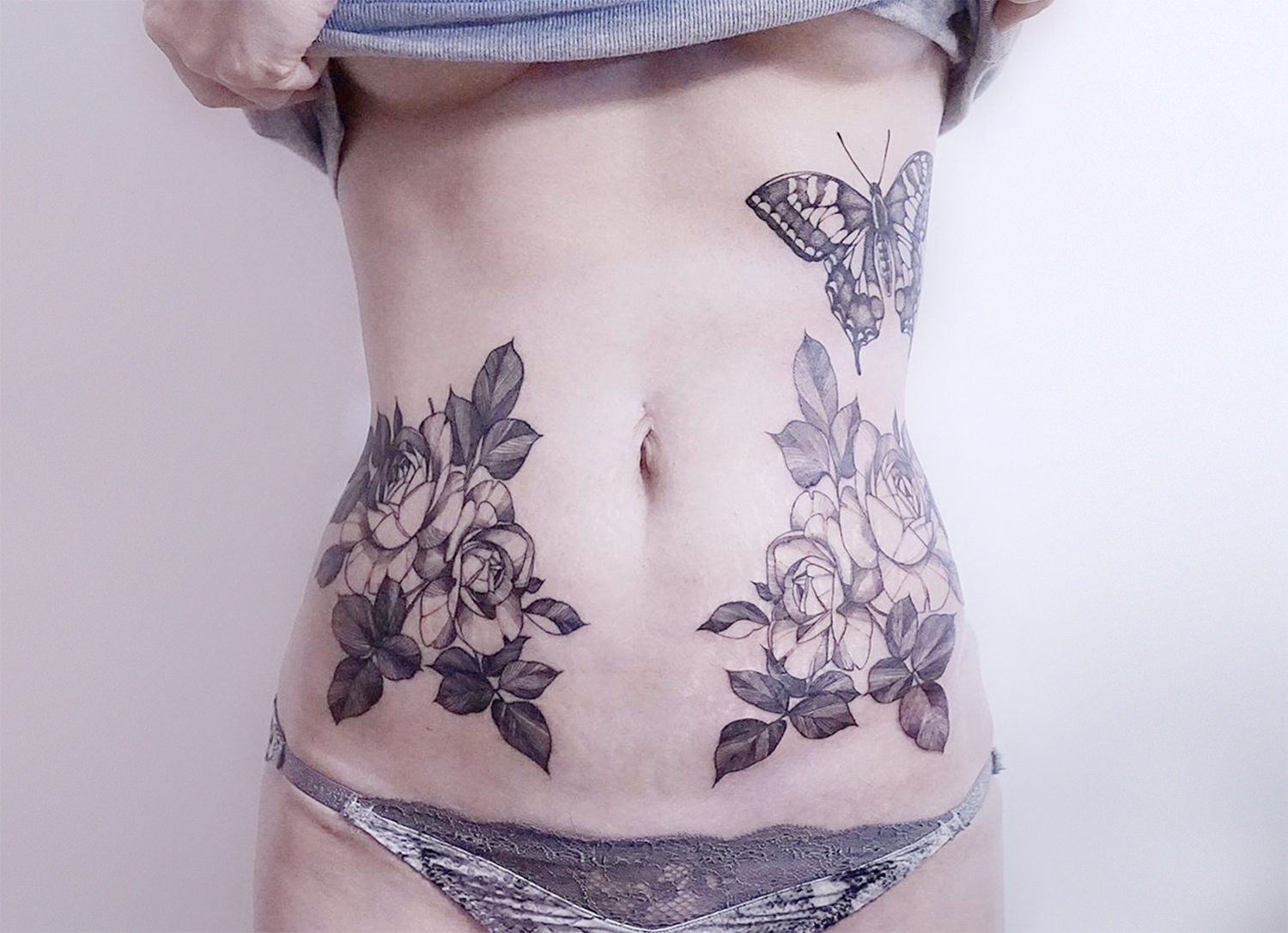 Beautiful floral tattoos, the one below is a scar cover up.

Zihwa is bolder than most when it comes to style. A tattoo artist‚ÄĒand one half of Reindeer Ink‚ÄĒwith a massive Instagram following, her blackwork flowers isn‚Äôt shy when it comes to size or placement. She often adorns the shoulders, back, and chest, using floral arrangements to frame (and highlight) certain body parts. For those that can‚Äôt travel to Seoul, Zihwa is on the cusp of opening up a shop on the Reindeer Ink website. 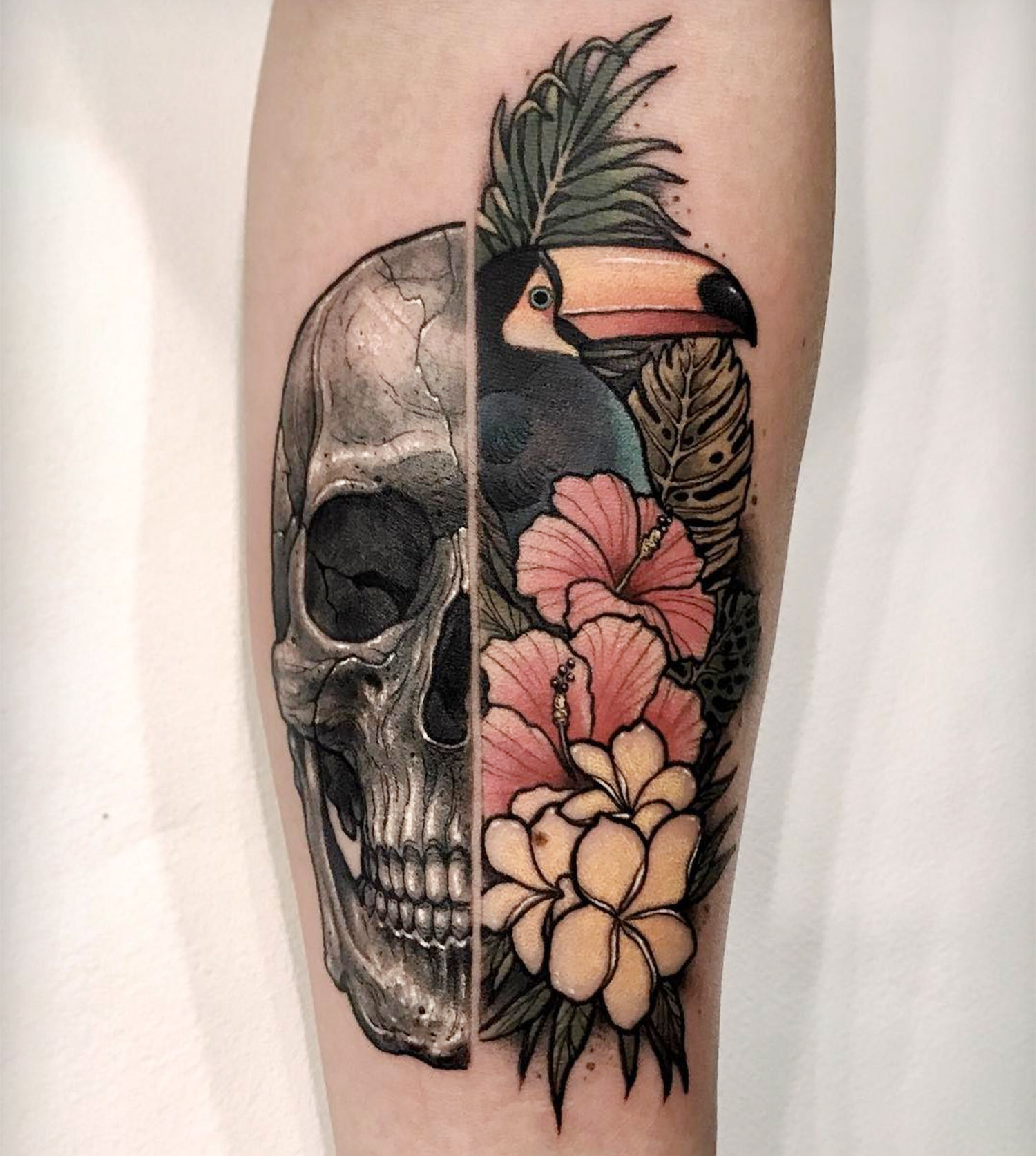 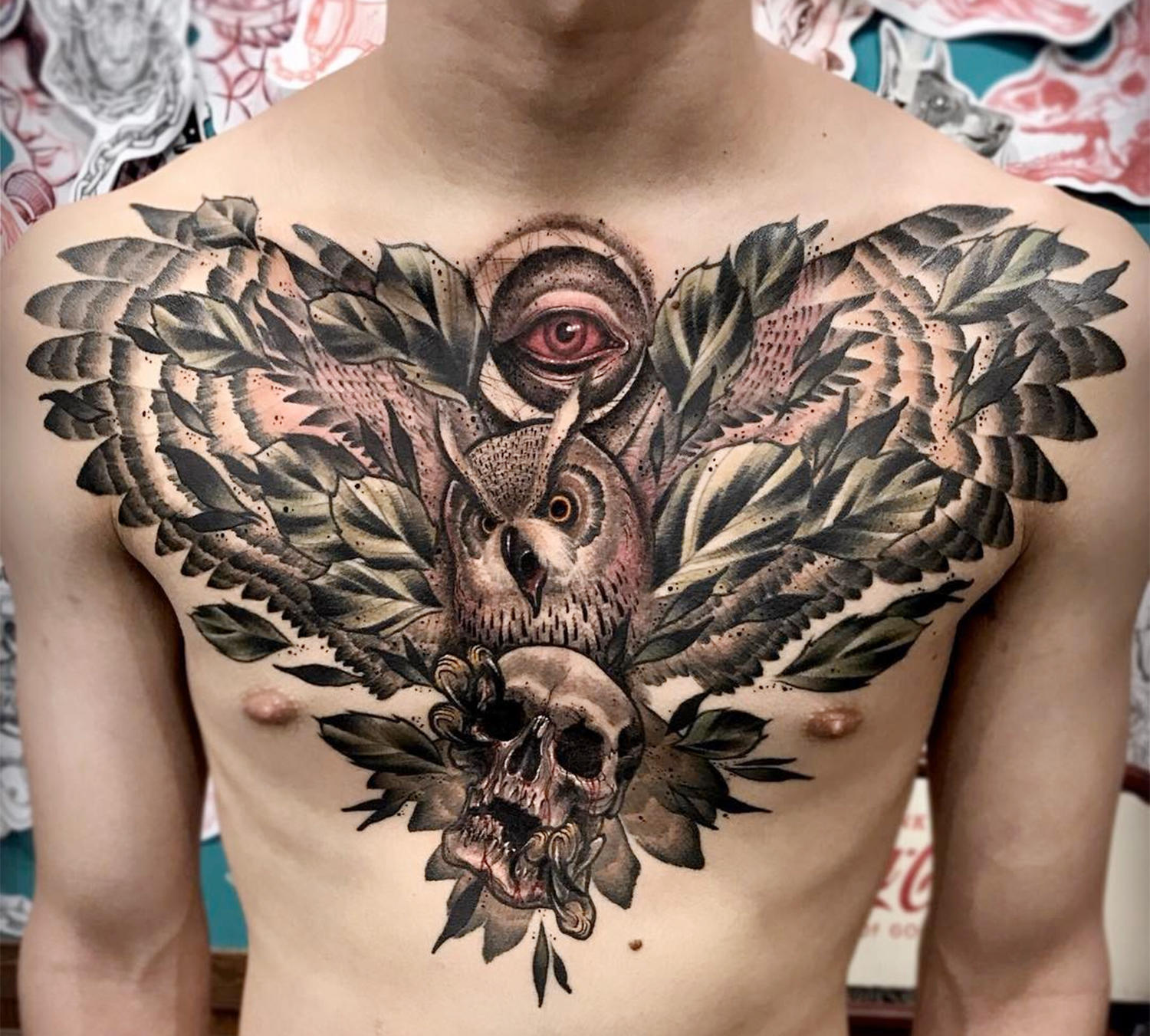 Totem pole and tropical skulls are just a few cranial variations by Varo.

Varo splits his time between Busan and Seoul, working in affiliation with LightHouse INK. His particular style places him solidly within the neo-traditional camp. It’s a departure from the minimalist aesthetic that’s seen¬†by many tattooers on this list. After all, you can‚Äôt hide a recreation of the Korean flag as fire and water‚ÄĒespecially when it sits in the center of your hand. 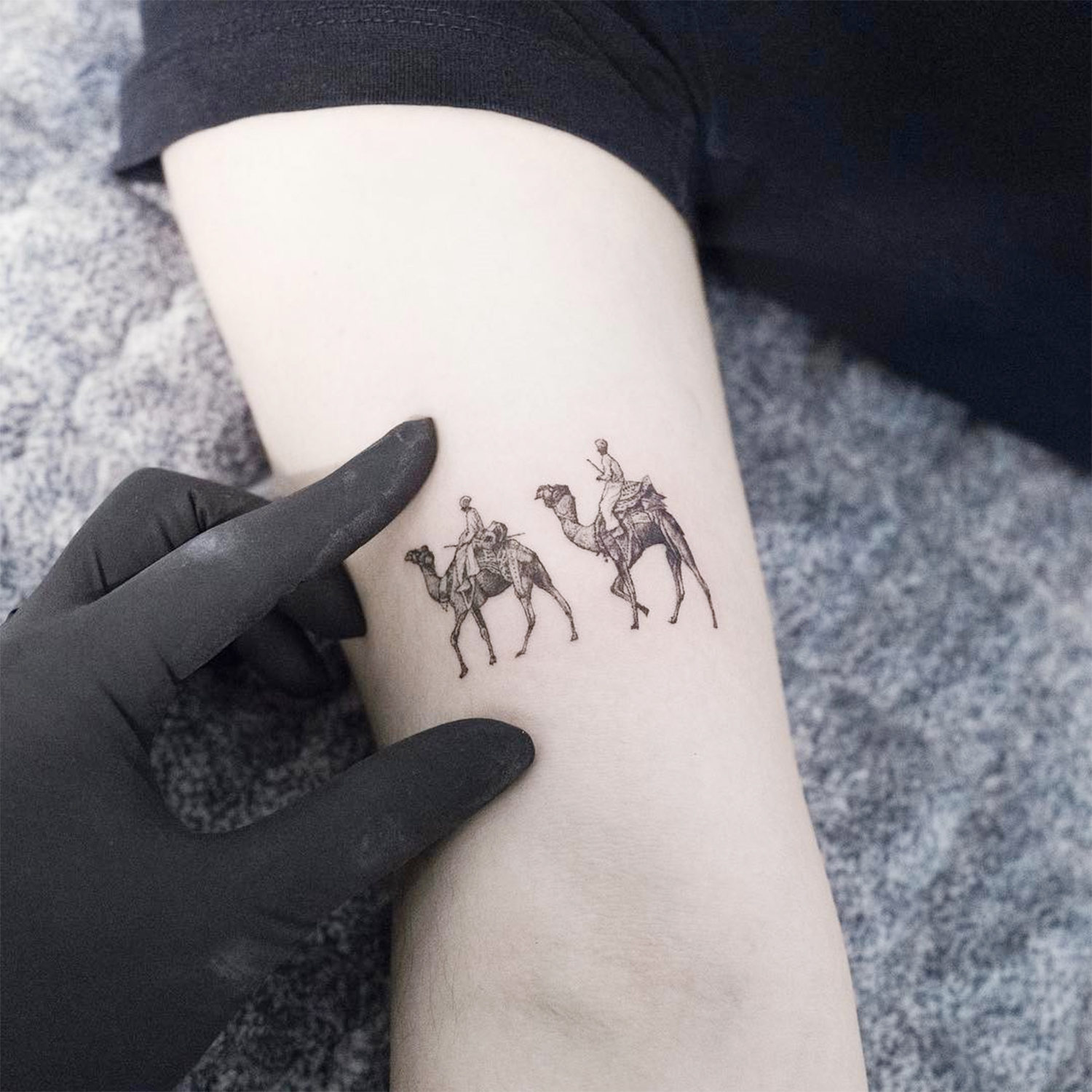 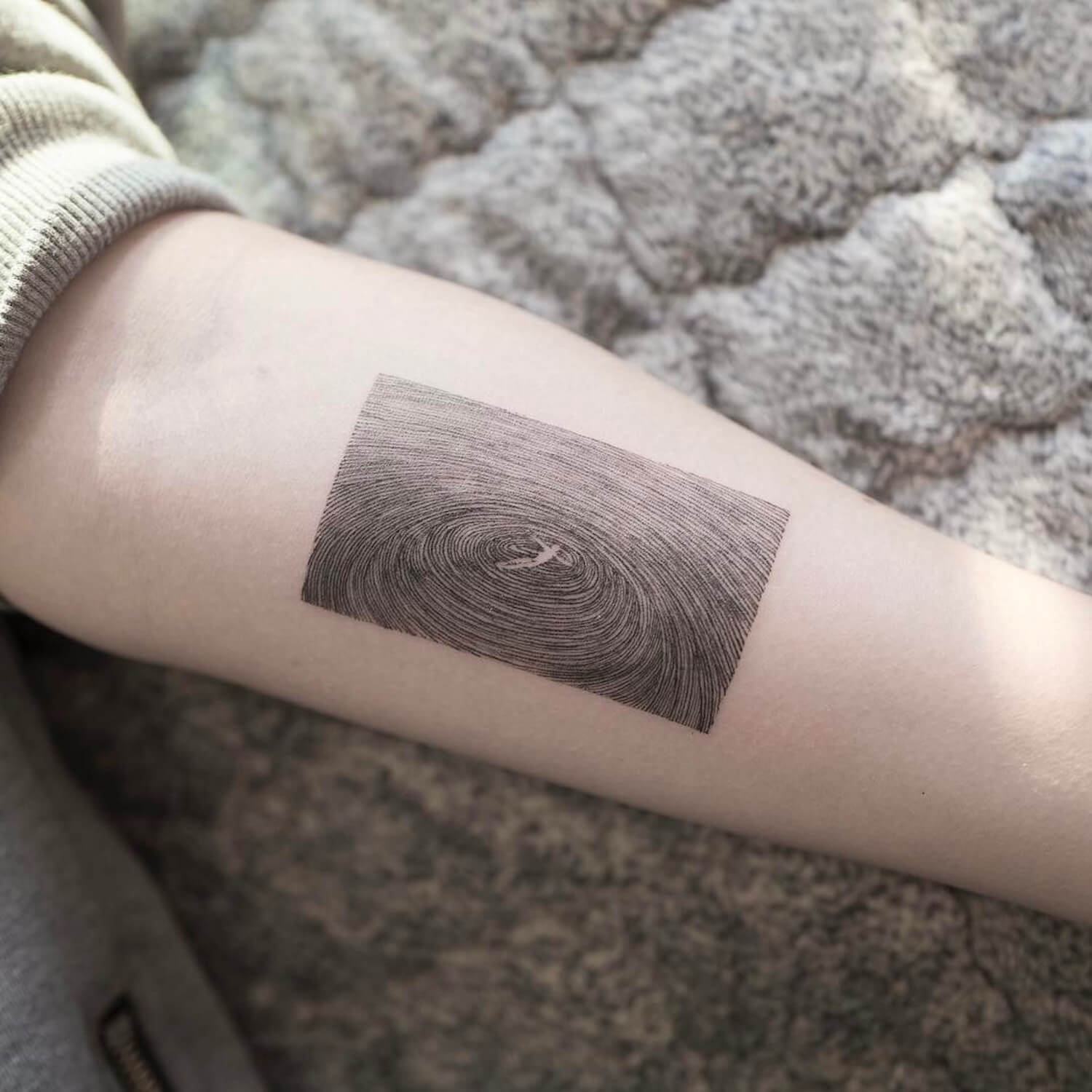 Hongdam calls his foray into tattooing “inevitable” based on his training in art school.

Hongdam put his art school degree to good use to become one of South Korea‚Äôs most renowned tattoo artists. After graduating, he was looking for a job that ‚Äúinvolved drawing and involved getting paid,‚ÄĚ and he then decided to learn how to ink. ‚ÄúIt is not as complicated as people think as long as you [are] good and you are disciplined,‚ÄĚ he told Yo Tengo Un Sue√Īo. Continuing, ‚ÄúThe drawing and creating the design is same, the only difference is the medium which is used, which in this case is a tattoo machine. I can say my background and years of practice drawing made the transition much easier.‚ÄĚ 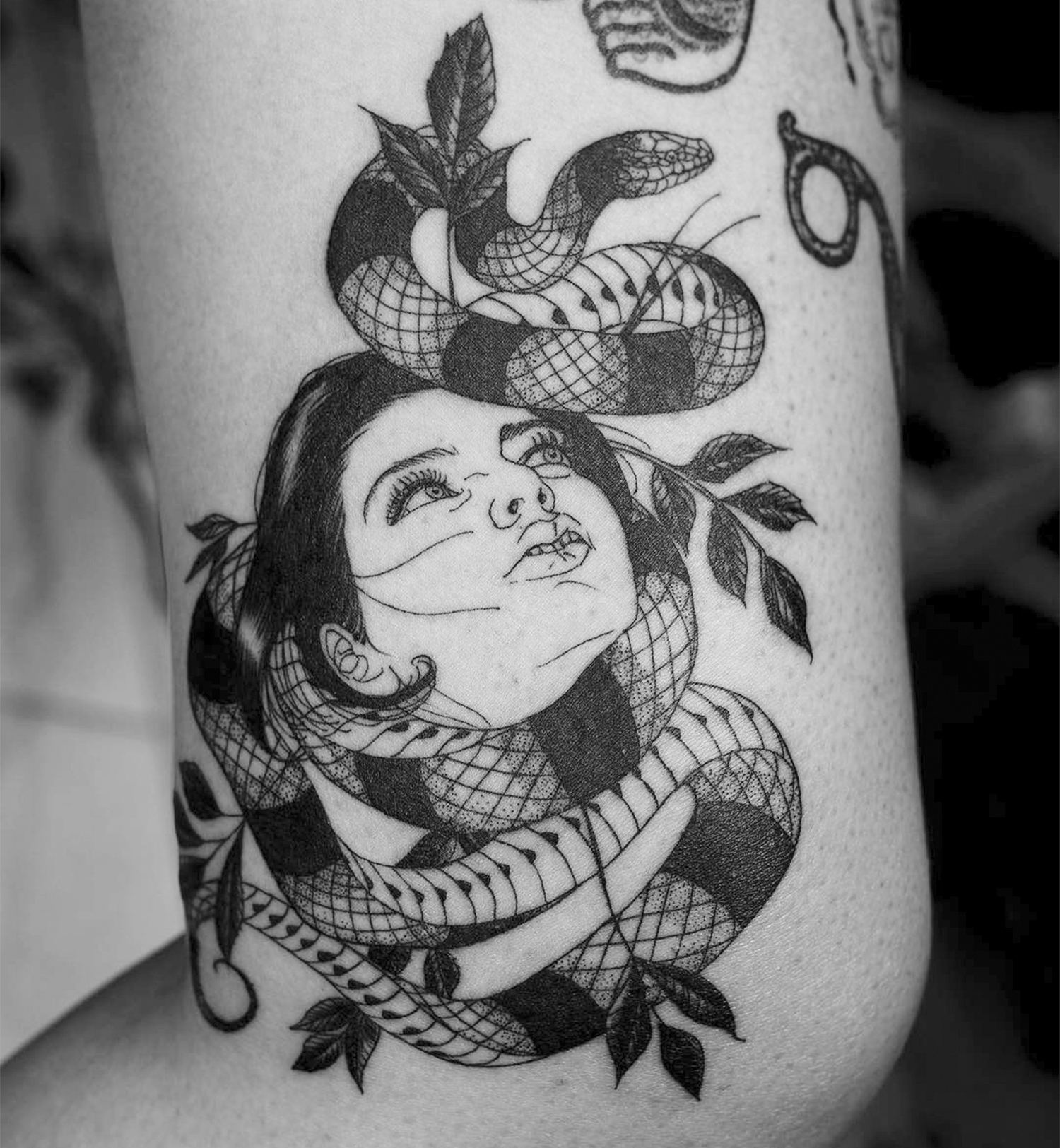 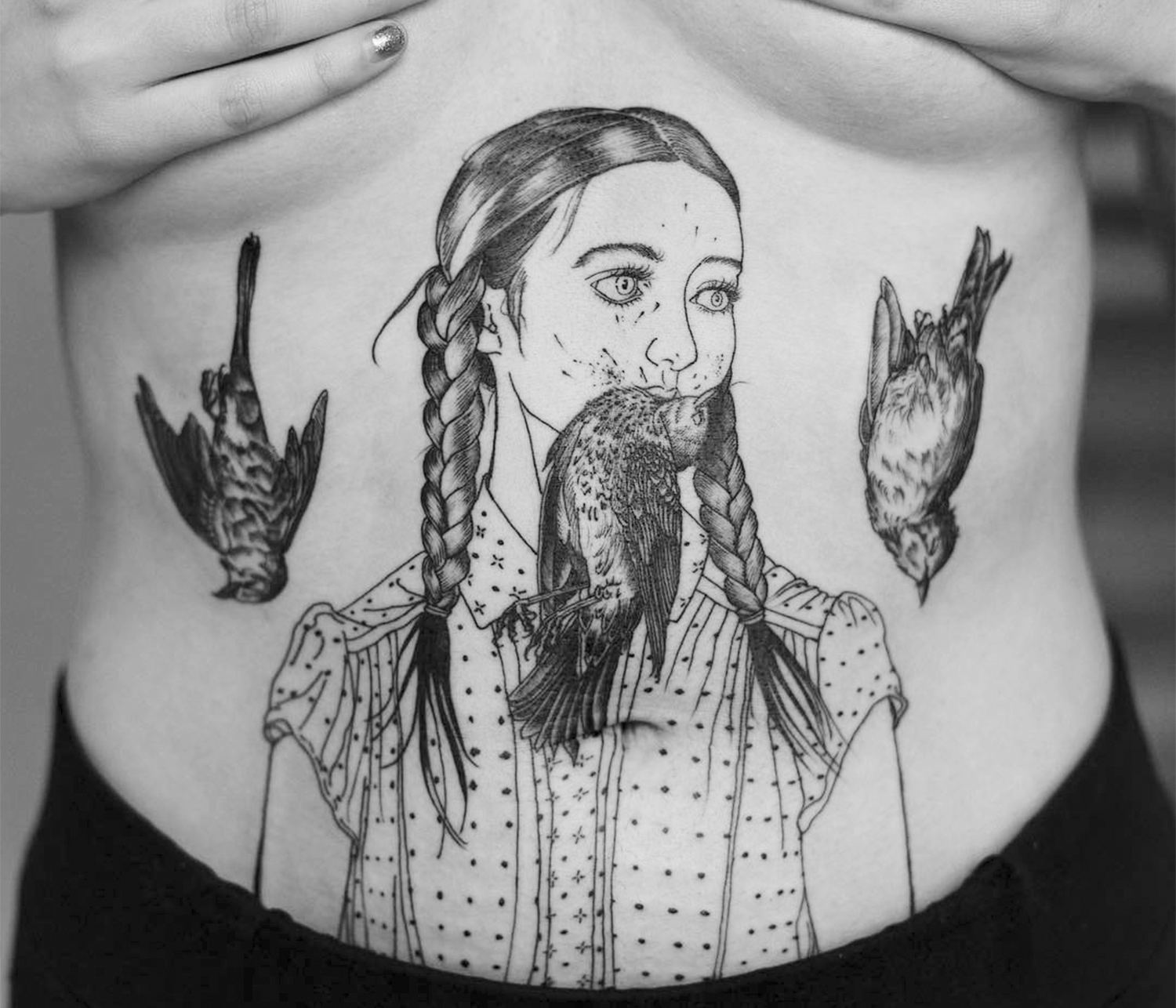 Coiled snakes are a common motif in OOZY‚Äôs portfolio.

Oozy is tattooer who I‚Äôve admired before, specifically for his impressive interpretations of famous paintings. In pieces like Da Vinci‚Äôs ‚ÄúThe Last Supper‚ÄĚ and ‚ÄúVitruvian Man,‚ÄĚ Ozzy adds a glitched-twist and fractures and distorts faces. This seems less common in his recent work, and instead he focuses on surreal scenes with a macabre feel. Death and decay are common themes as nature reveals the full scope of its ruthlessness. 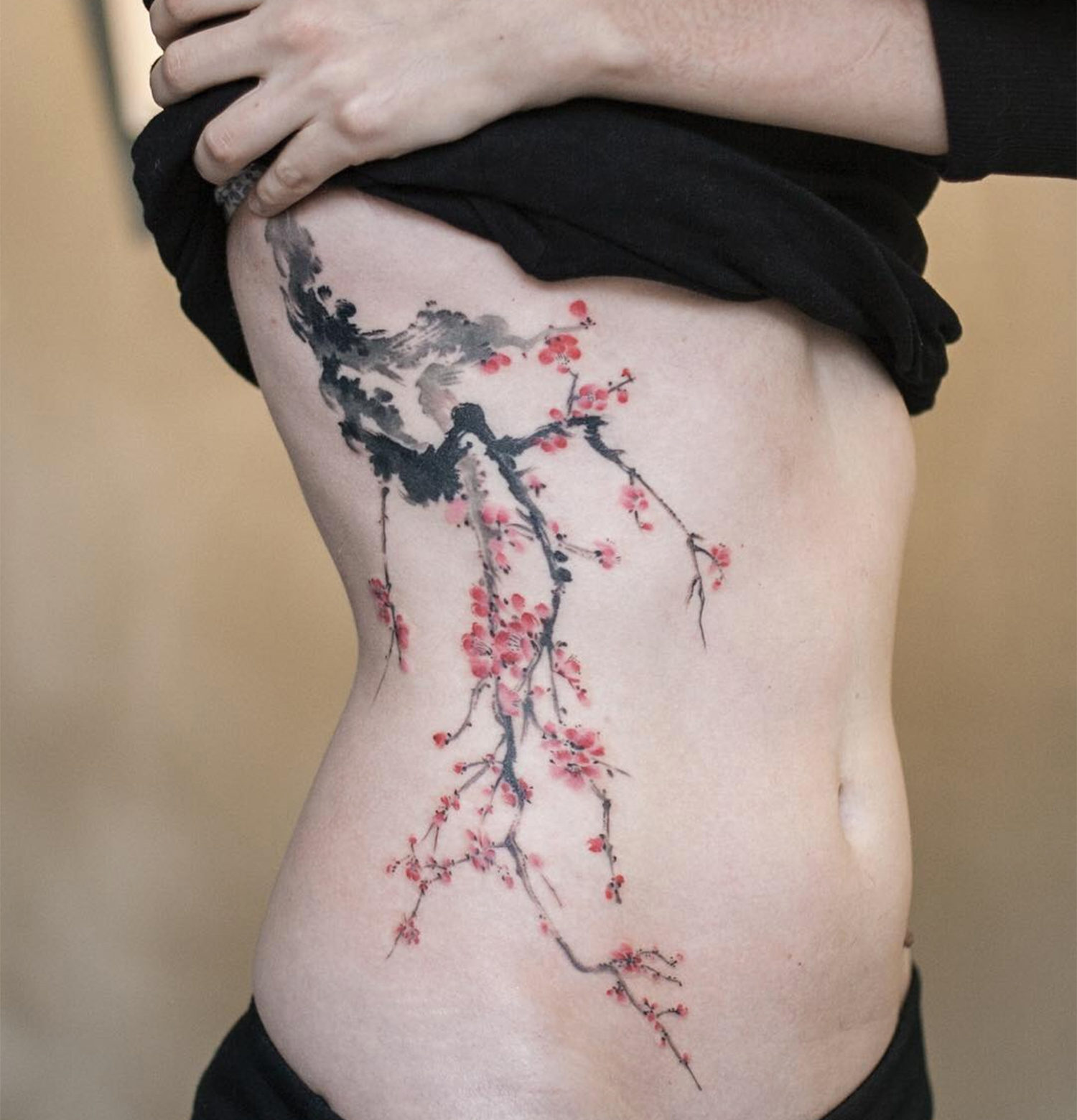 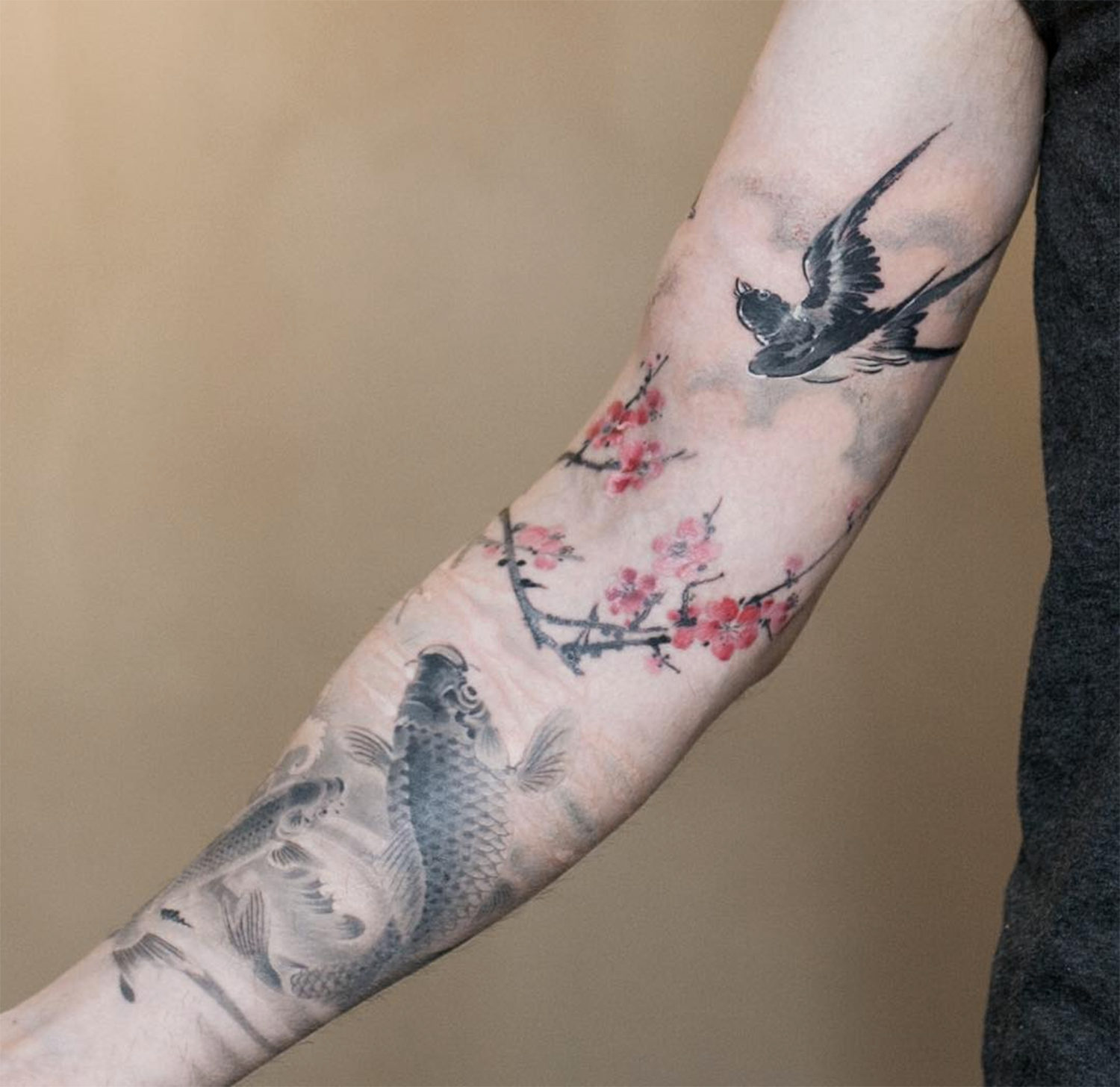 This (almost) full sleeve by Graffitoo is inspired by oriental painting techniques.

Working under the moniker Graffitto¬†(a fusion of the words graphic and tattoo), the Seoul-based artist prides himself on creating ‚Äúunique and graphical tattoos.‚ÄĚ Continuing, ‚ÄúI make designs for every single [person] who asked me [about] tattoos from tiny tattoos to big size of tattoos. All designs are only for one person and can not be used again.‚ÄĚ They run the gamut of soft florals to storybook vignettes to old school-style swallows with a technicolor twist. 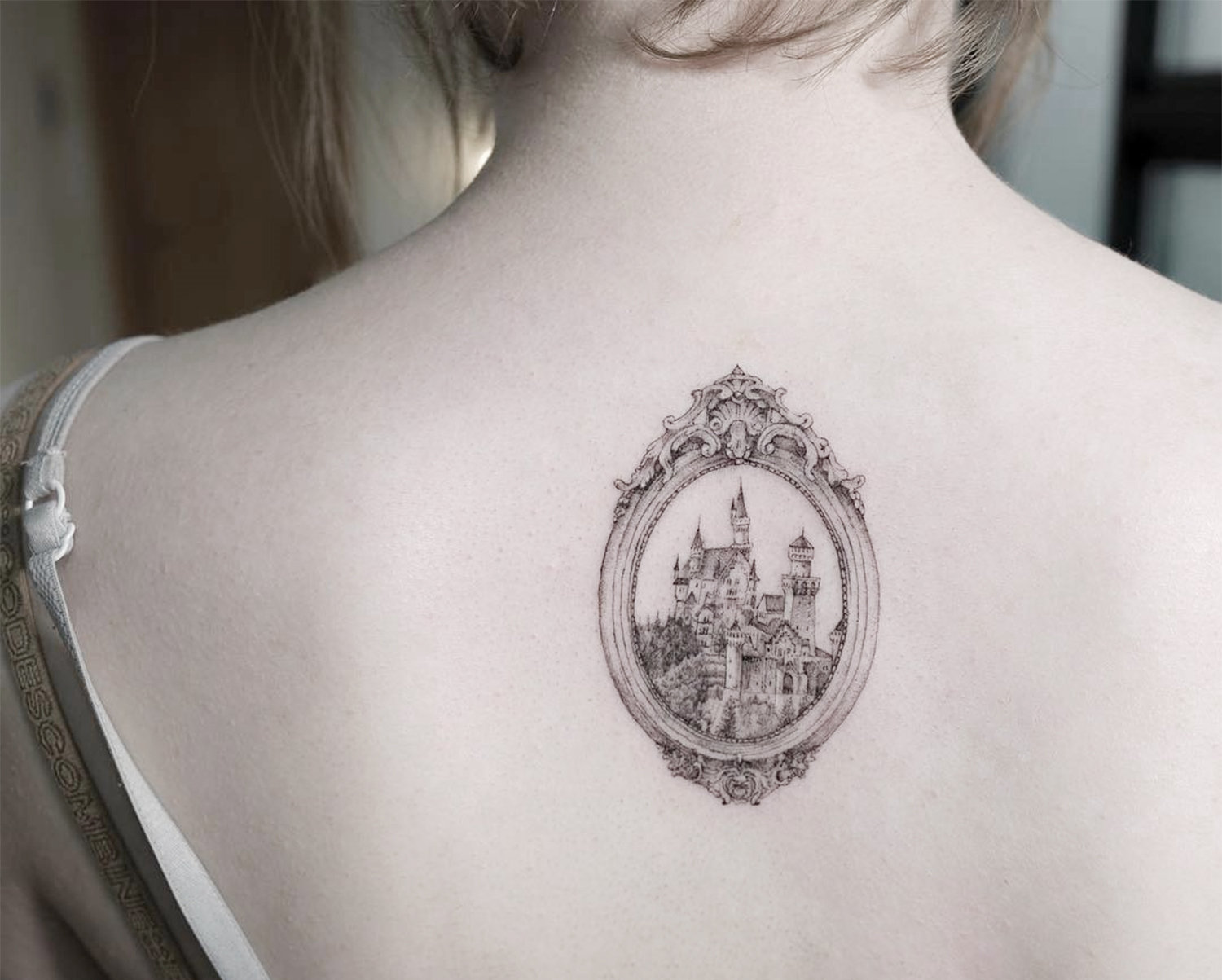 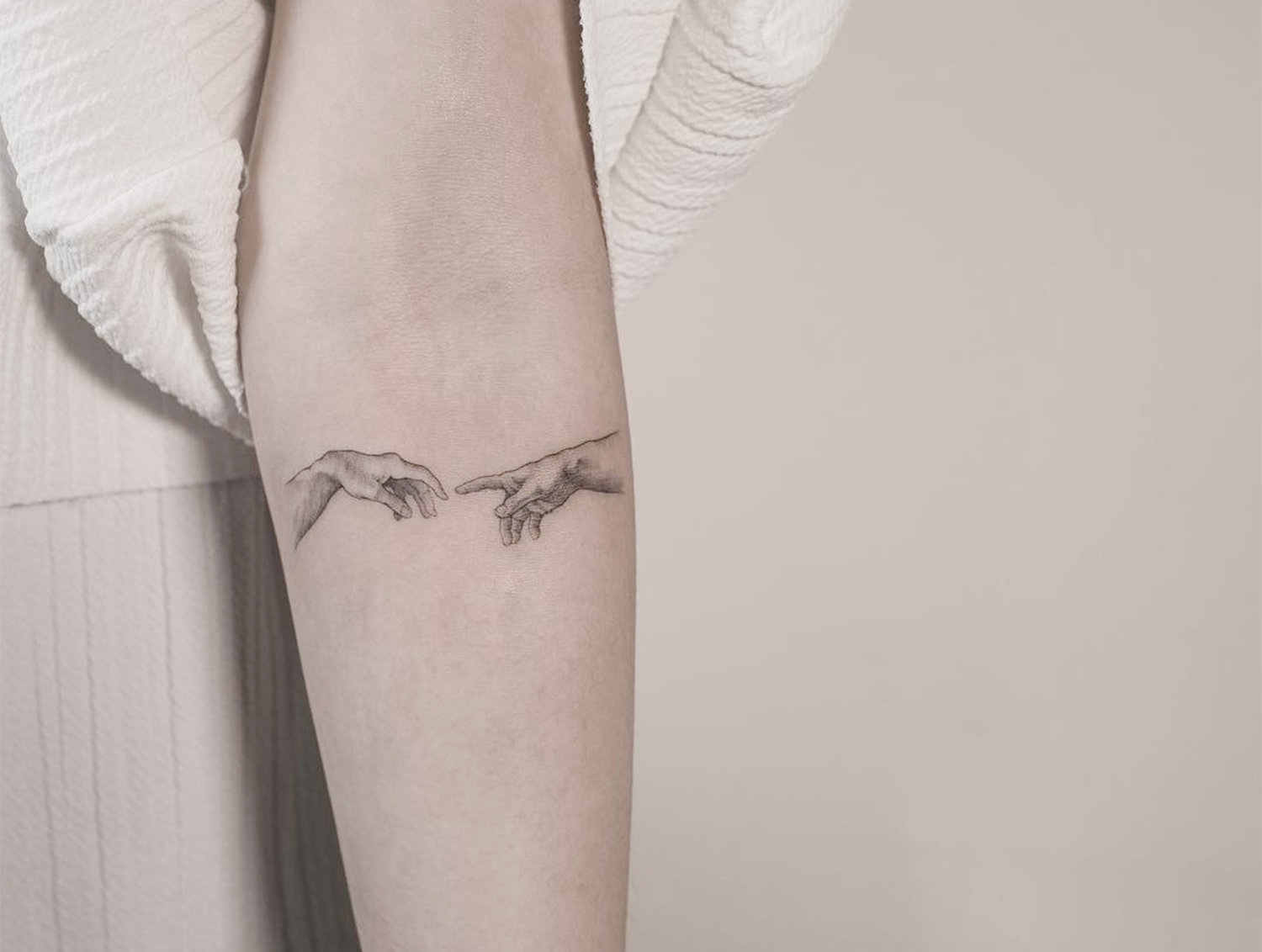 This castle is a departure from Sol Art‚Äôs floral and figurative tattoos.

Sol Art first made waves in 2015 for her minimalist pet tattoos. Although they haven‚Äôt completely disappeared from her portfolio, she does vary her choice of imagery. Her delicate, fine-lined style lends itself well to portraits and recreating iconic art like Da Vinci‚Äôs ‚ÄúMona Lisa‚ÄĚ and Botticelli‚Äôs ‚ÄúThe Birth of Venus.‚ÄĚ Like many South Korean tattooers, she doesn‚Äôt advertise a studio. Instead, you can contact her privately about getting a tattoo. 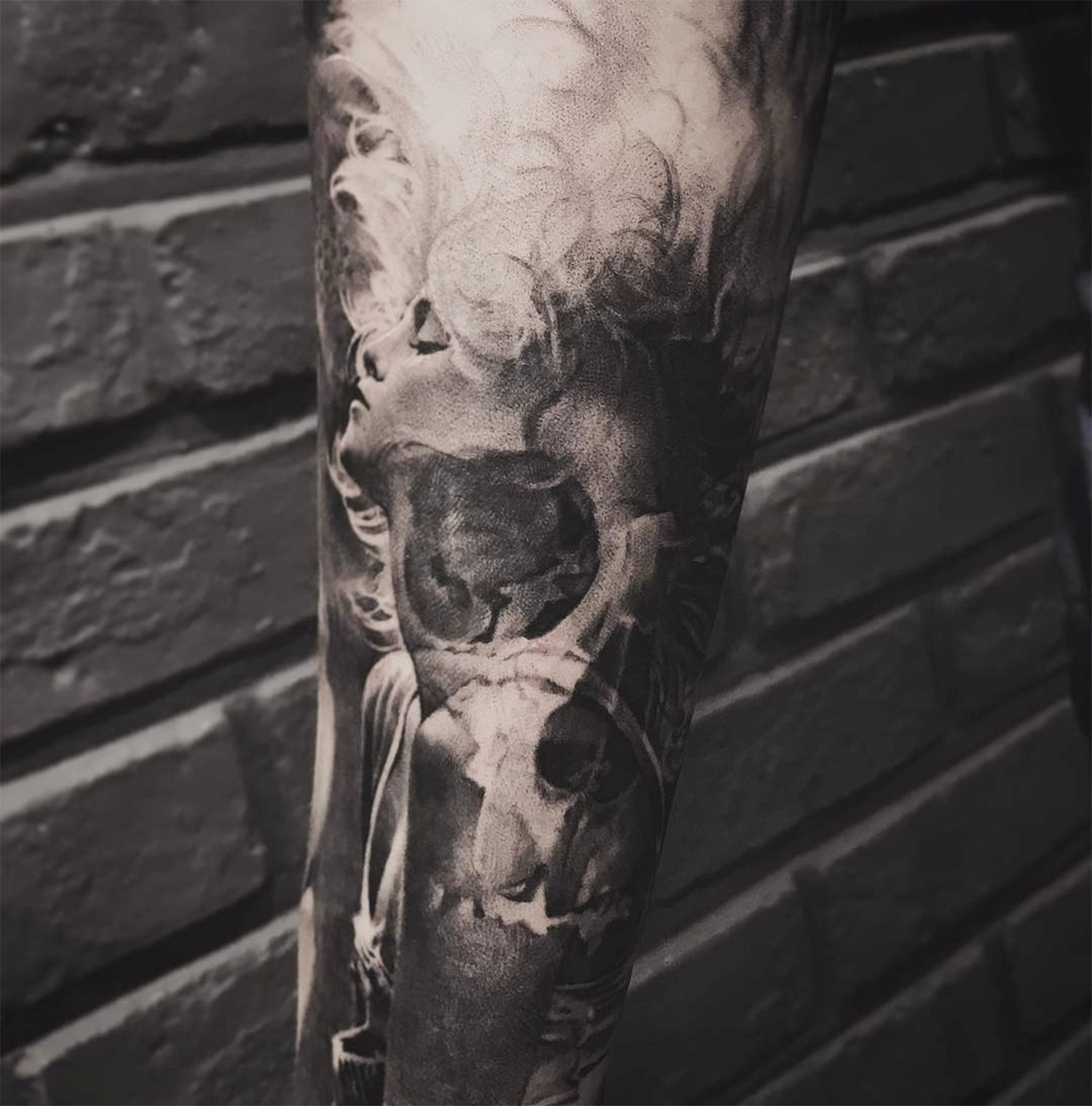 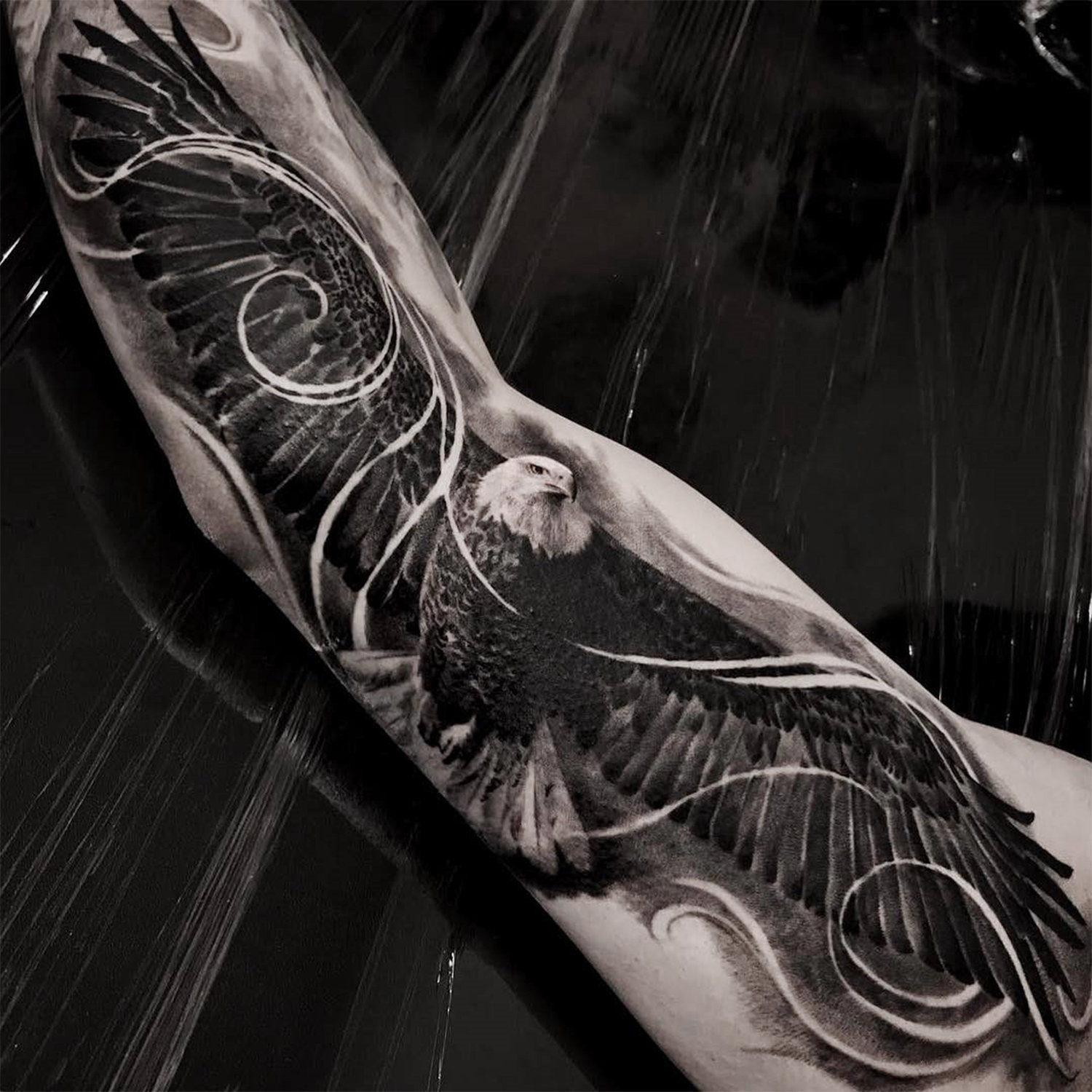 JeongHwi uses the negative space of skin to give his figures depth.

Working in the photorealistic style, JeongHwi produces an incredible feeling of depth and atmosphere on skin. With soft and diffused shading (in black and grey pigments), he reproduces a hazy texture that lingers like smoke. His work is done in his studio called Cold Gray Tattoo, where they say that “Empty vessels make the most sound‚ÄĚ; meaning that they prove their skills with results, not words. ‚ÄúWe don’t brag about ourselves like others do, but we prove ourselves with actions and skills, bringing truly artistic soul to your skin.‚ÄĚ 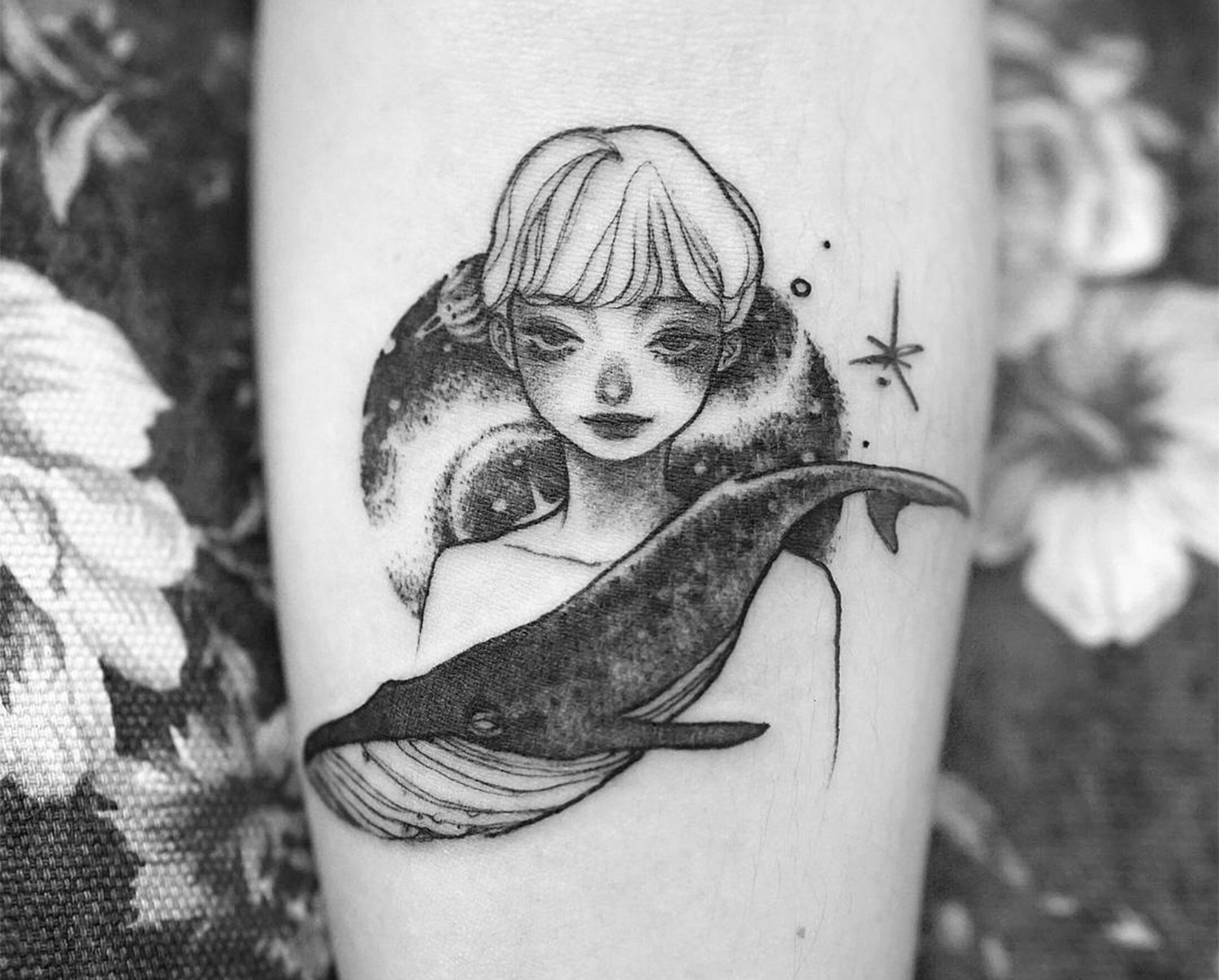 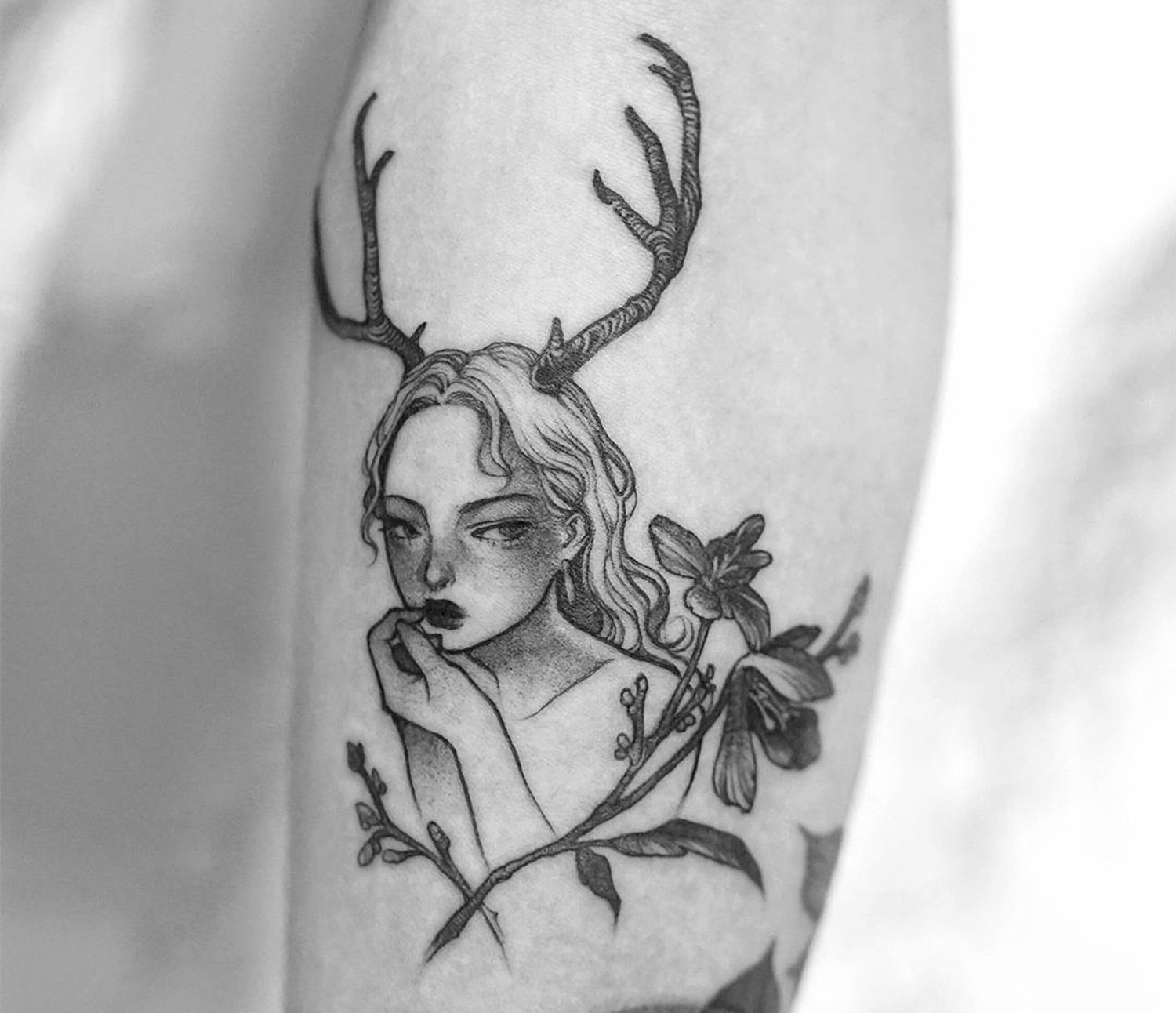 Zihae‚Äôs characters are consistent among her work, like we‚Äôre viewing the¬†ongoing tale of one big family.

Zihae is the other half of Reindeer Ink, which she runs with the similarly named Zihwa. But rather than following along with Zihwa‚Äôs bold florals, Zihae transports us into a dream world thanks to her fantastical subject matter. The small blackwork tattoos are very character driven‚ÄĒoften with a fantastical twist. From Alice in Wonderland-inspired portraits to whales swimming in the galaxy, Zihae‚Äôs drawings of men and women have dreamy eyes and sleepy smiles. And if you‚Äôre ever looking for a cover up, Zihae will transform that into something more exciting. 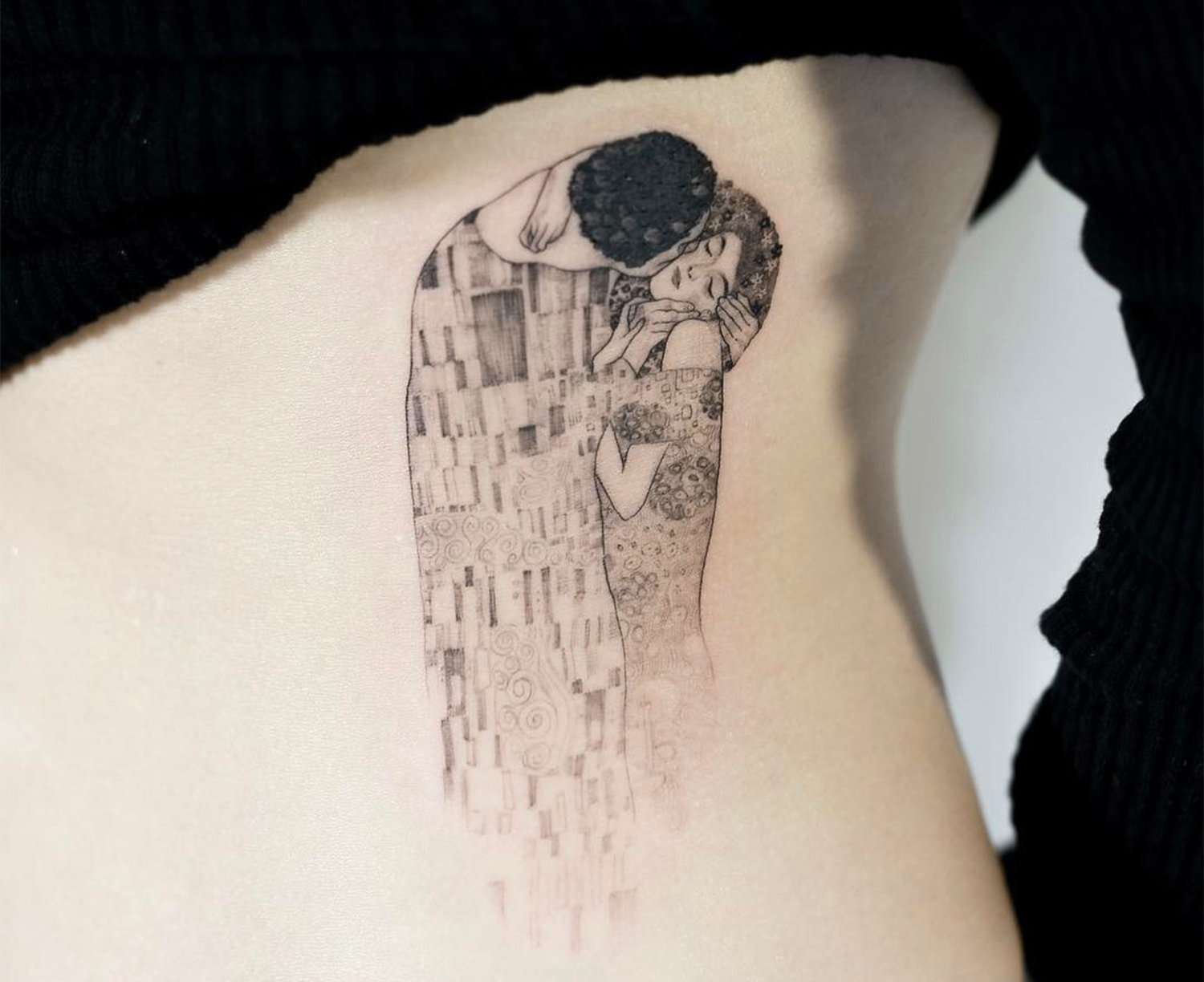 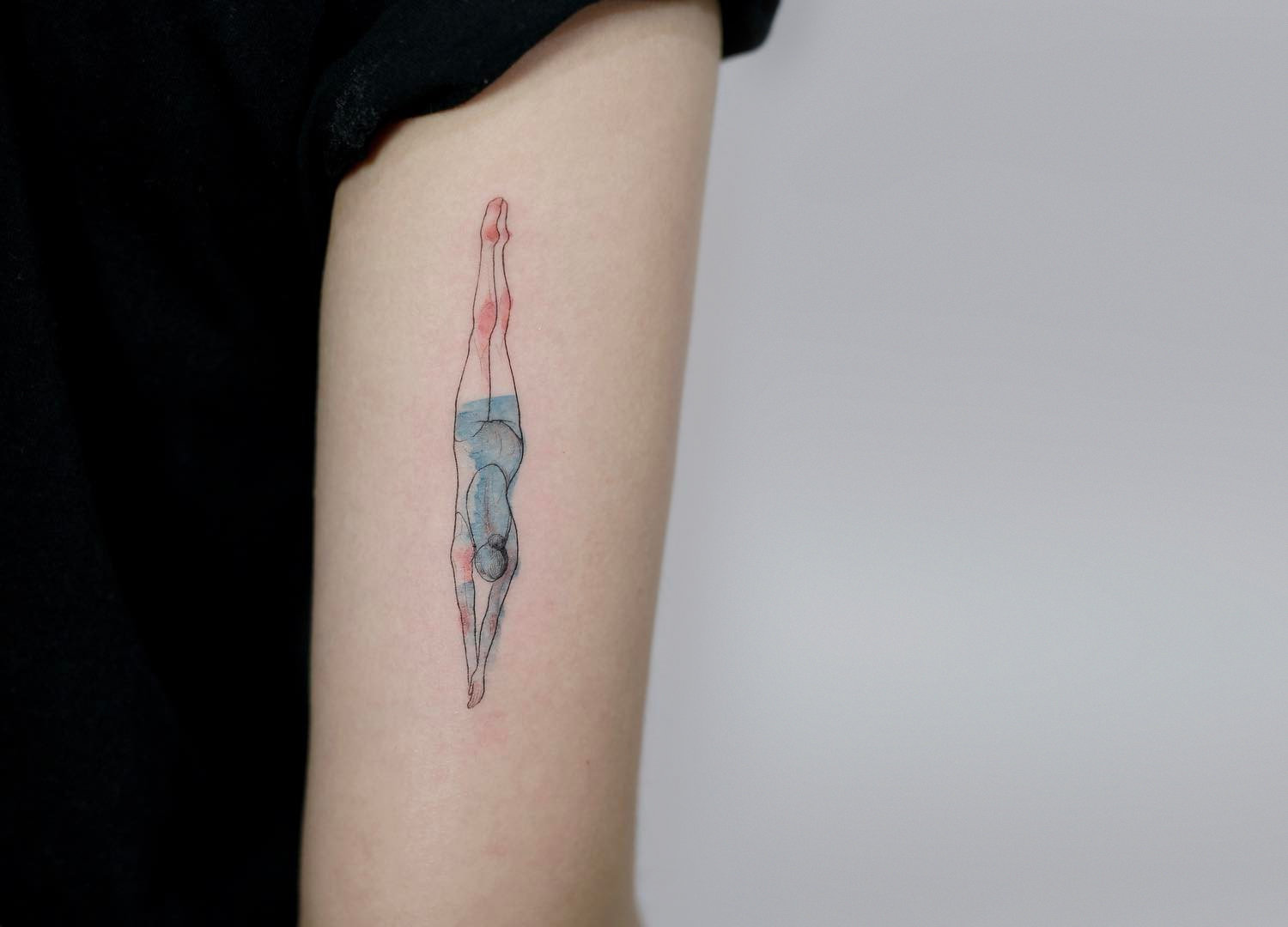 Gustav Klimt‚Äôs ‚ÄúThe Kiss‚ÄĚ is a popular tattoo subject, but here, Doy adds a ghostly feel to the timeless painting.

Tattooist Doy¬†works with a single needle to depict a wide range of subjects, from floral imagery to animals to pop culture-inspired pieces. Their common thread is the very fine lines that make up his work. It‚Äôs a style that Doy flawlessly translates between mediums. Recently, he drew a portrait of the late singer Amy Winehouse using colored pencils, and then later tattooed it on a client‚Äôs arm. The two are almost indistinguishable from one another‚ÄĒan impressive feat considering skin is way more fickle than a sheet of paper.