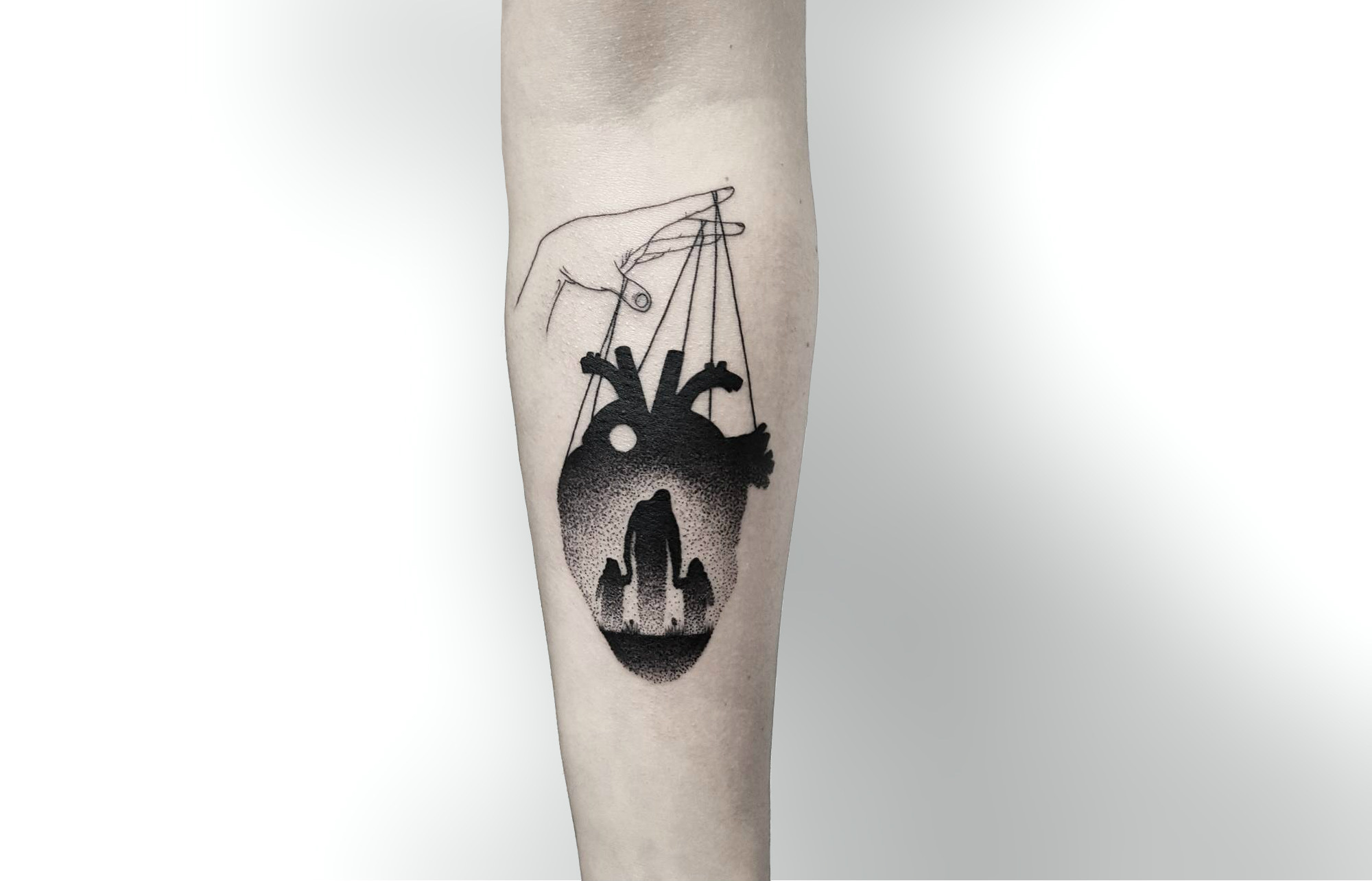 Every year, the tattoo talent pool grows infinitely more diverse. Every art style that has ever existed can be transferred to skin, and clients¬†are more engaged¬†than ever.

It’s¬†all about the niche, now. Instead of ‚Äúwhat‚Äôs in?‚ÄĚ, people are asking, ‚Äúwho am I?‚ÄĚ Identity-driven tattoos are transcending the fad of the moment. It‚Äôs a heartening evolution of consumer consciousness, and can only mean good things for the trade to come. Today, we take a look at a handful of artists in no particular order, all of whom add something interesting to the collective conversation.

Top: “Don’t Forget To Love Your Family” by Matteo Nangeroni. 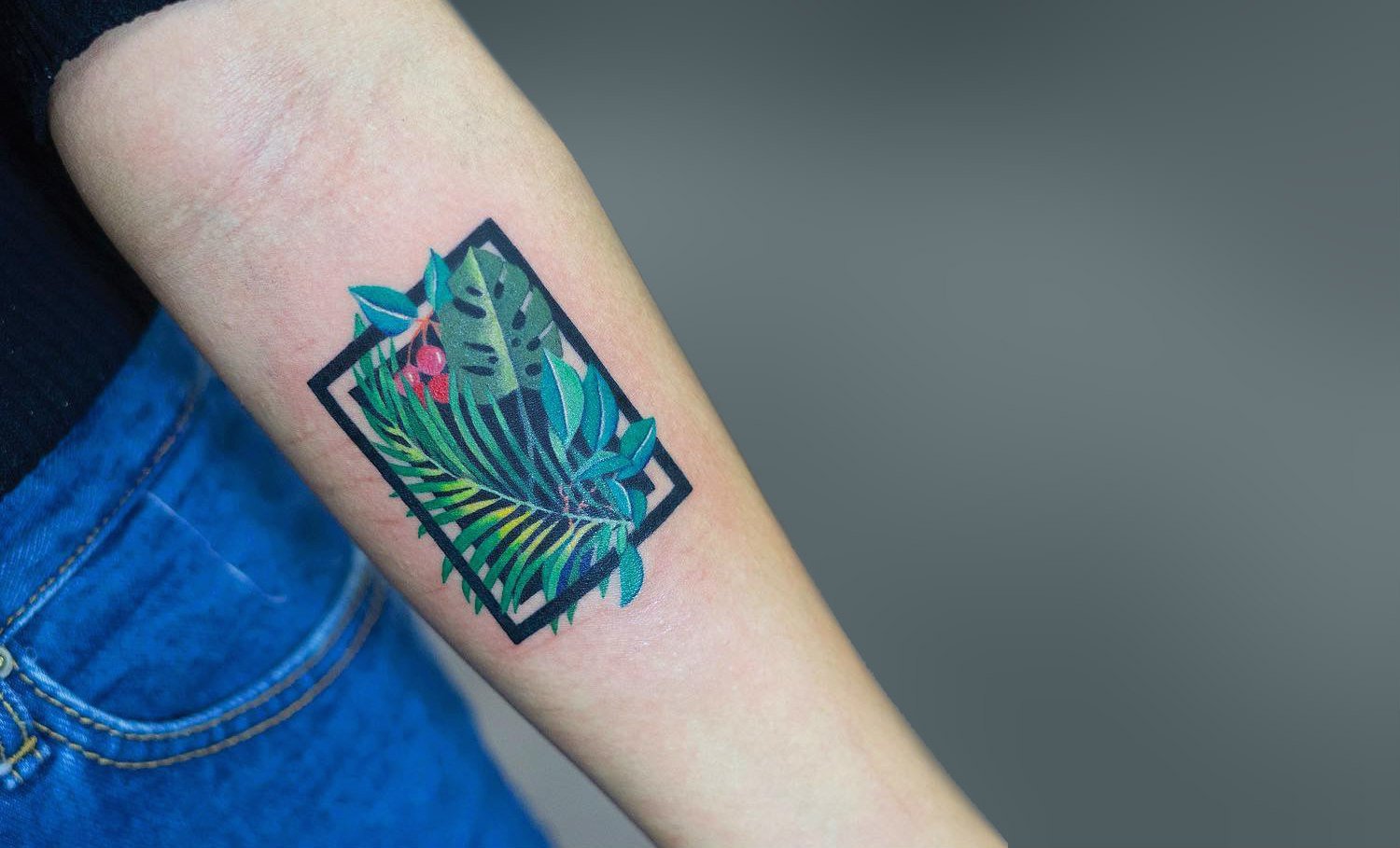 A window to tropical paradise by Zihee.

Seoul‚Äôs Zihee explores complex miniatures in painstaking detail. A vibrant palette is both her personal preference and a strategy to boost the tattoo‚Äôs lifespan.

Miniatures are still experimental. All tattoos are constantly fading, and tightly¬†packed lines can be the first to blur. Zihee uses high contrast colorwork to define boundaries, and¬†stabilize¬†the design as much as possible (considering there‚Äôs no black outline nor breathing room on the body). Healed photos prove¬†she studies¬†the¬†results, too. She¬†posts unfiltered progress shots whenever possible, a commitment to transparency and her clients’ happiness. 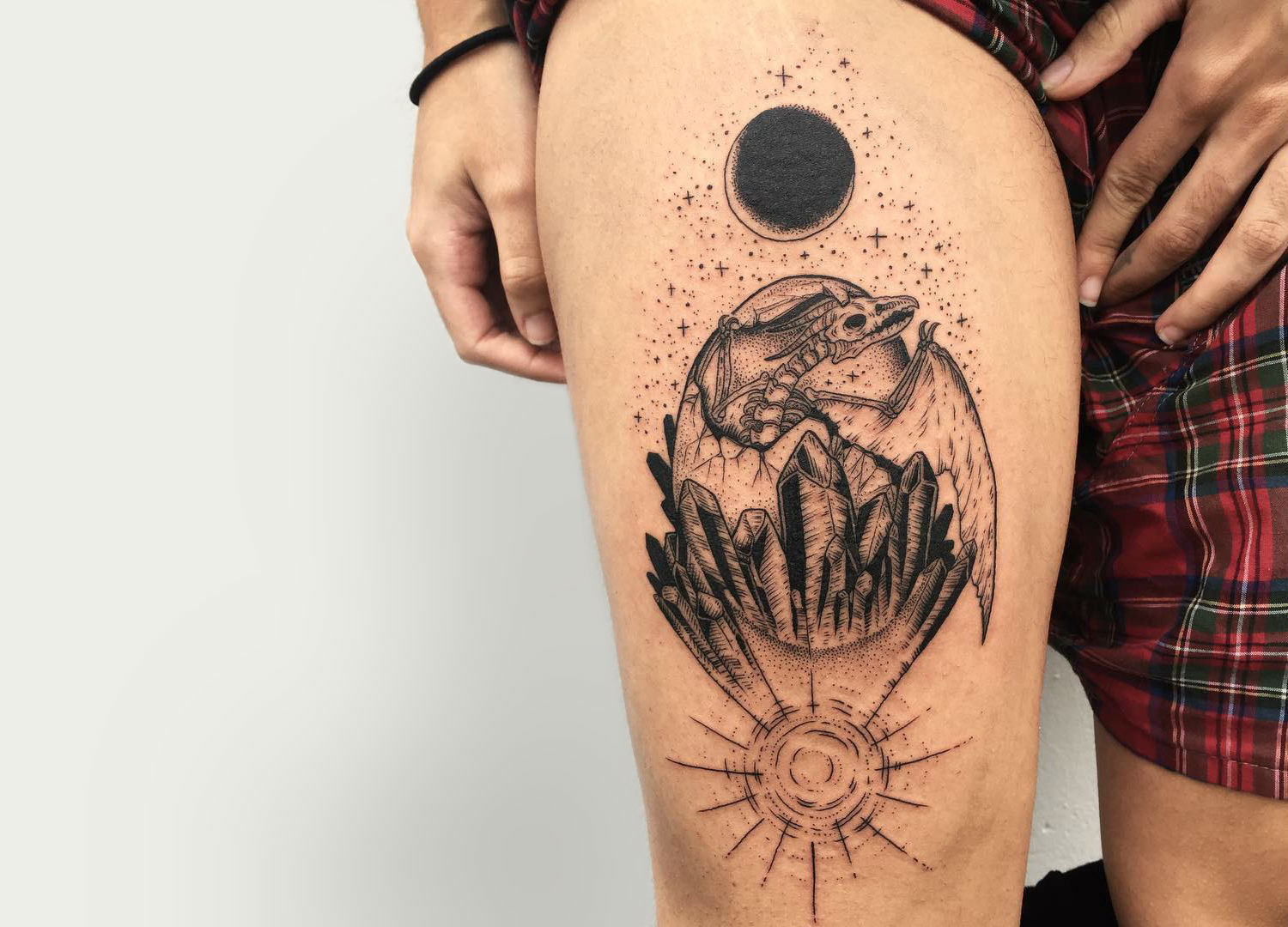 Portland‚Äôs Junko Osaki is¬†an¬†“introverted conversationalist.” They explain, ‚ÄúI have a lot to say, but am only inclined to share my thoughts when I know I‚Äôm being heard.” It‚Äôs one of many reasons you‚Äôll only find Osaki in queer-friendly studios with other mindful artists.

Manga and Japanese folklore influence¬†their designs. Born and¬†raised¬†in Japan, Osaki was immersed in the¬†culture during formative years. ‚ÄúWhen I moved to the U.S., it felt like almost all of that disappeared and was denied from me, as I was teased about my differences. I held back my natural draw to my own culture for many years, and am more recently re-discovering the missing pieces of my identity. That definitely carries through in my artwork!‚ÄĚ 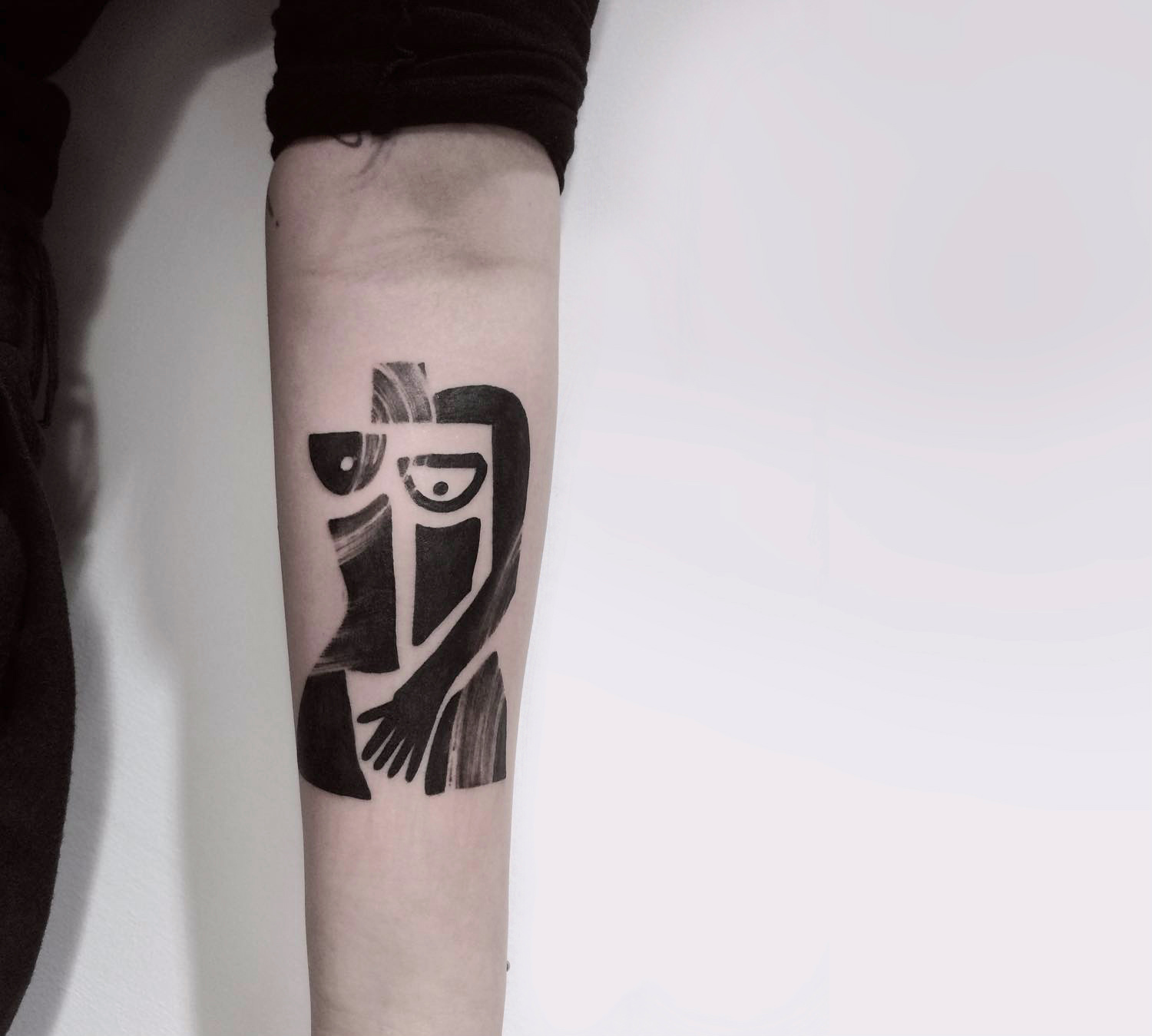 Russia‚Äôs¬†Viktor Gusev tends ‚Äúto practice a different approach every time‚ÄĚ he paints. He may transfer ink to paper, use digital software, or just improvise directly onto skin. He considers freehand tattoos to ‚Äúraise the ‚Äėless is more‚Äô concept to its purest, most powerful form. This method leaves no room for compositional mistakes, but at the same time praises the accidental elements‚ÄĚ of the artist‚Äôs hand.

“I confess that I mostly enjoy the overall contrast between clear skin and black-packed, heavy forms.” Gusev is inspired by traditional Chinese paintings, aiming for his own brand of bold minimalism. 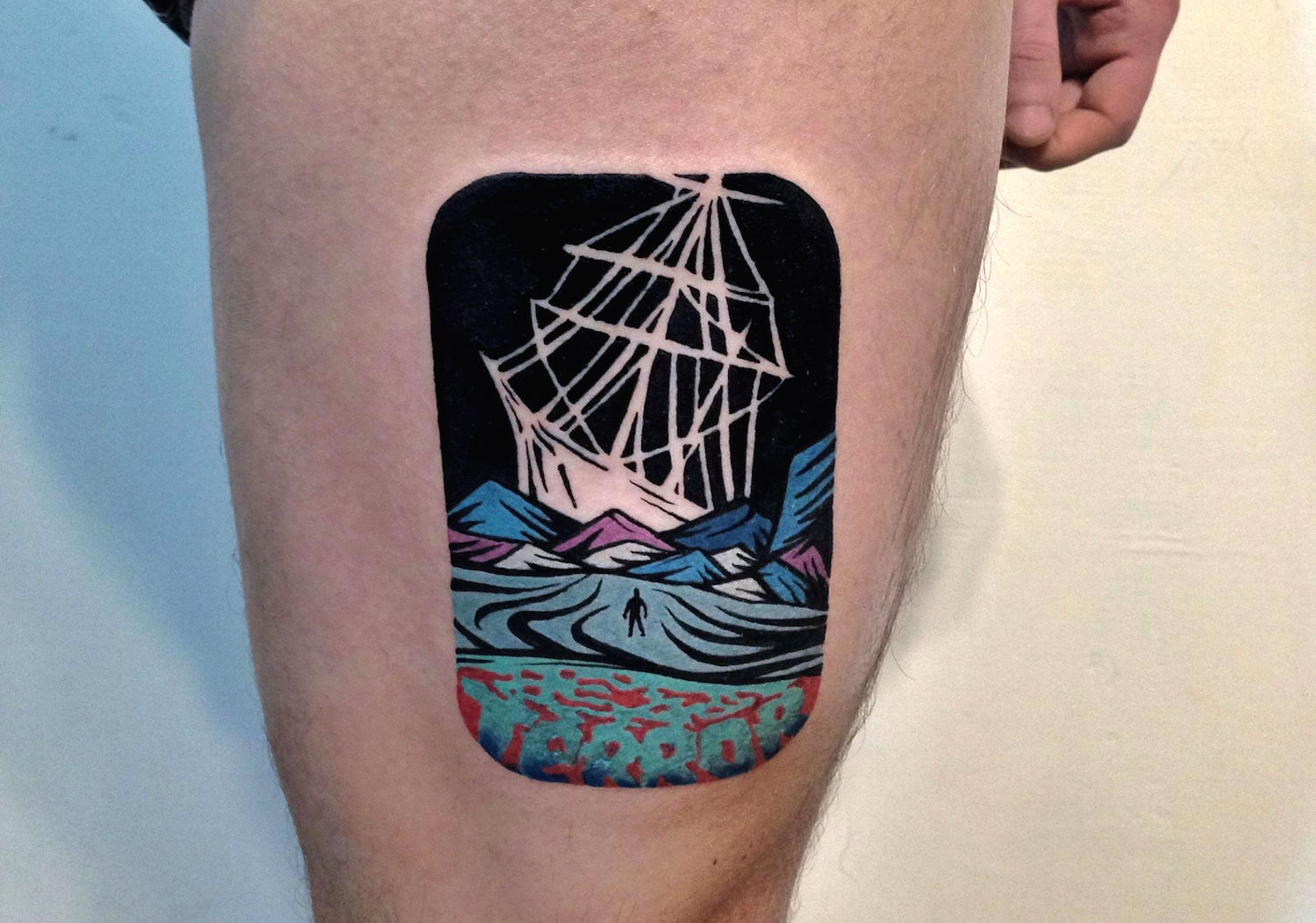 Linocut-inspired artist Dusty Past started his career in a cacti greenhouse. Seeing the delicate conditions some plants need to survive, he grew fascinated by the natural world. It inspired him to take to the road, to explore every climate on Earth, and to dream of other planets that don‚Äôt play by our rules. This curiosity is the backbone of his creative life.

“You shouldn‚Äôt be surprised to see something strange,” he admits. “I like to have one eye always looking at what‚Äôs happening in some other place in the universe.” And as for the neon color palette, he credits vintage comics for that. “Early issues of Metal Hurlant still have a huge influence on me and my art. I read a lot of sci-fi from the ’60s-’70s with awesome and colorful illustrations.” 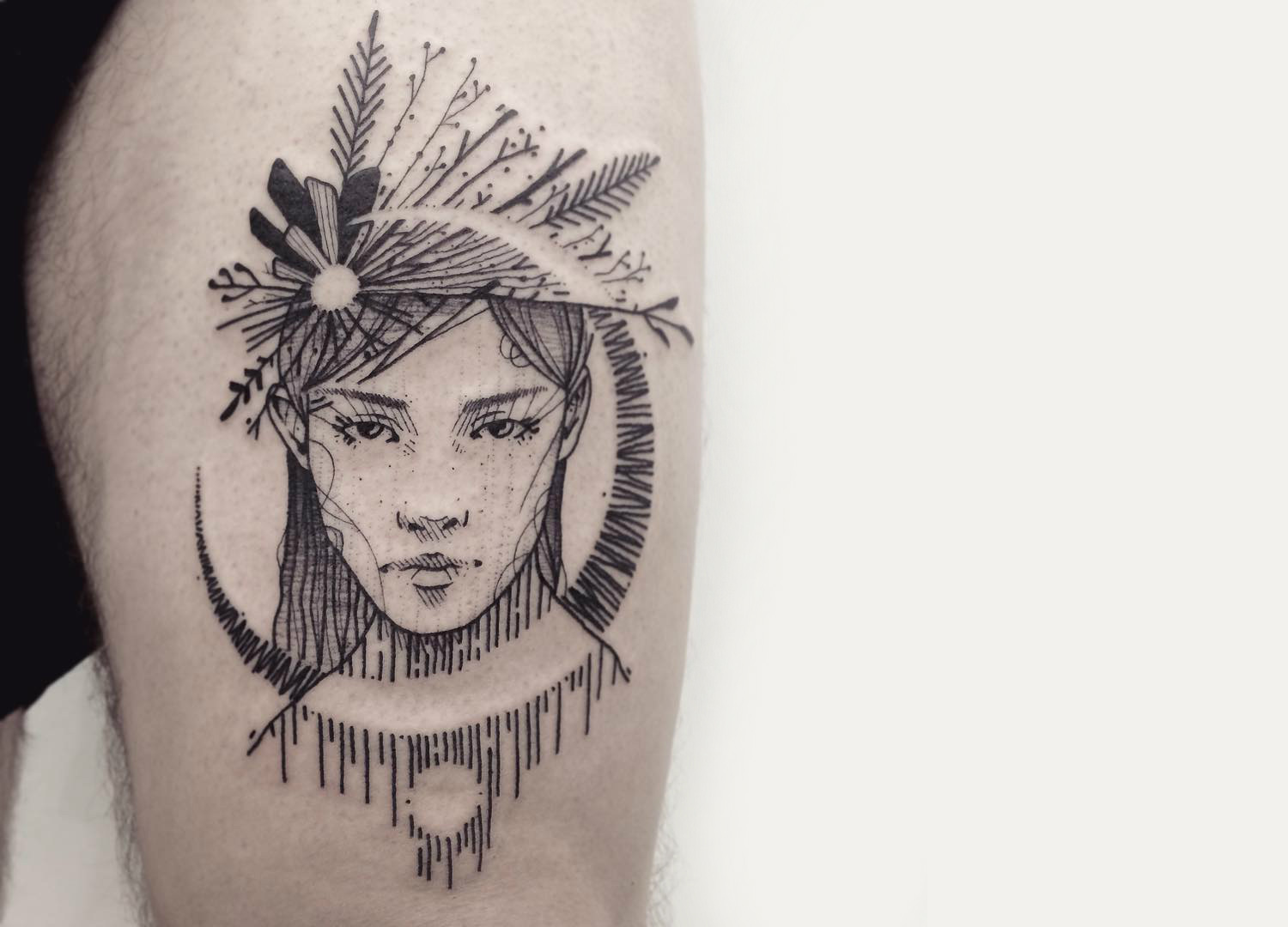 “The Woman and the Moon” by Guga Scharf.

Monochrome is never bland with Brazilian artist Guga Scharf. ‚ÄúThe language of my tattoos is more interesting in black.‚ÄĚ He explains that each sketch is a choreographed dance of different textures and negative space. ‚ÄúI work with elements intuitively. I do not plan what I create. The intention is to always balance and build strong compositions.‚ÄĚ

Clients sometimes ask if he‚Äôs a spiritual man. ‚ÄúI‚Äôve been told that I transmit calmness,‚ÄĚ he laughs. ‚ÄúBut I do not see it.‚ÄĚ He does attend¬†a Kardecist Spiritism center, though, which offers an alternative to organized religion. ‚ÄúFor me, that is a form of reflection, and a search for inner reformation. Maybe it comes out unconsciously in the art.‚ÄĚ 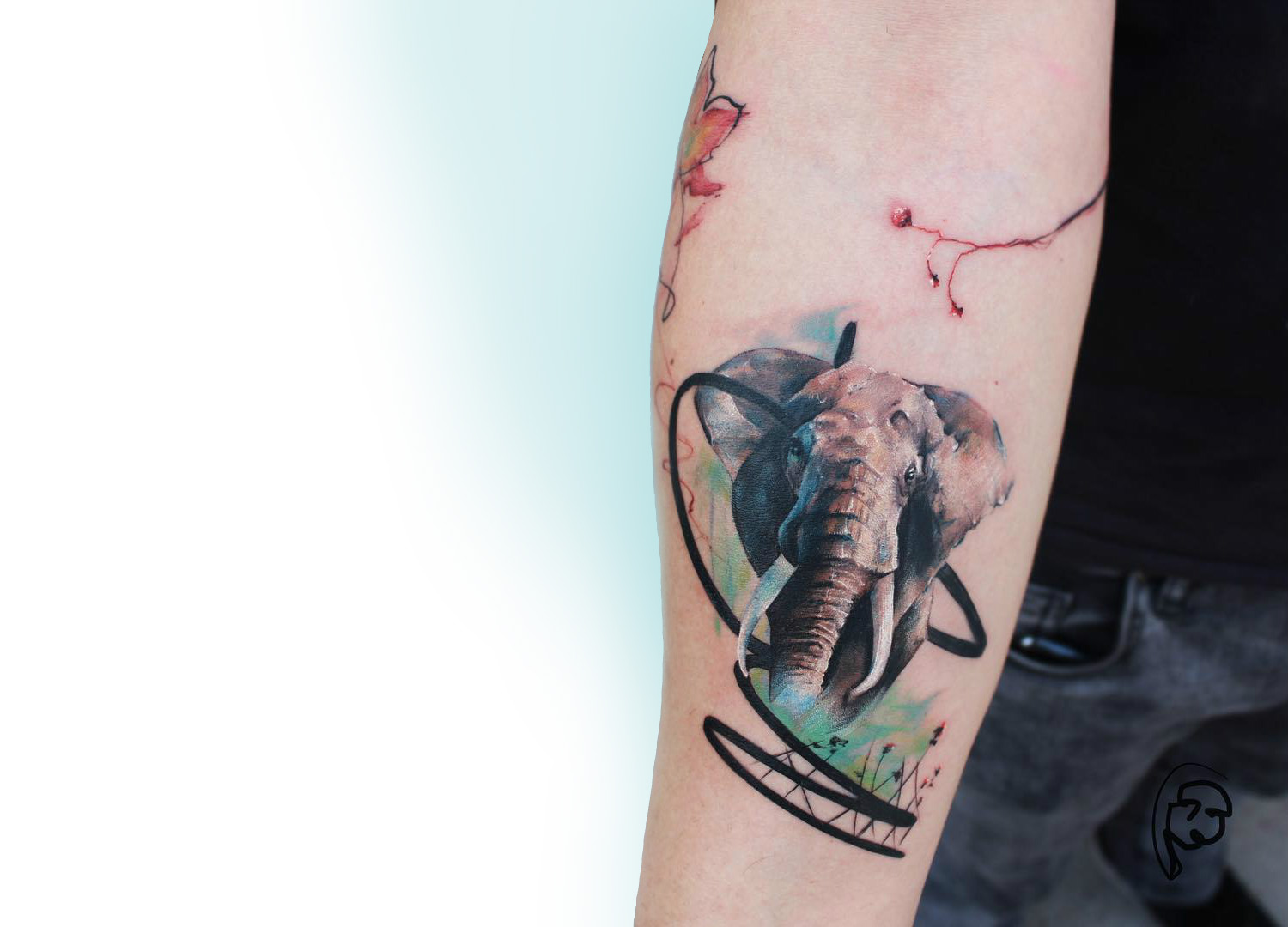 “On My Mind” by Tayfun Bezgin.

Turkish Ebru art inspires the linework of Tayfun Bezgin. Ebru, a method of painting atop the surface of oily water, creates unique marbling patterns. The organic swirls, the variations of weight and balance all influence his tattoos. From there, he continues to build.

‚ÄúI separate my styles with different seasons,‚ÄĚ Bezgin explains. ‚ÄúArt Nouveau and [Austrian] Secessionism influenced season one. I imagined myself living in the periods affected by those movements, and tried to express what I saw.‚ÄĚ Season two will focus on minimalism. The goal is to ‚Äútransform conceptual themes into simple lines,‚ÄĚ to edit details without sacrificing depth of emotion. 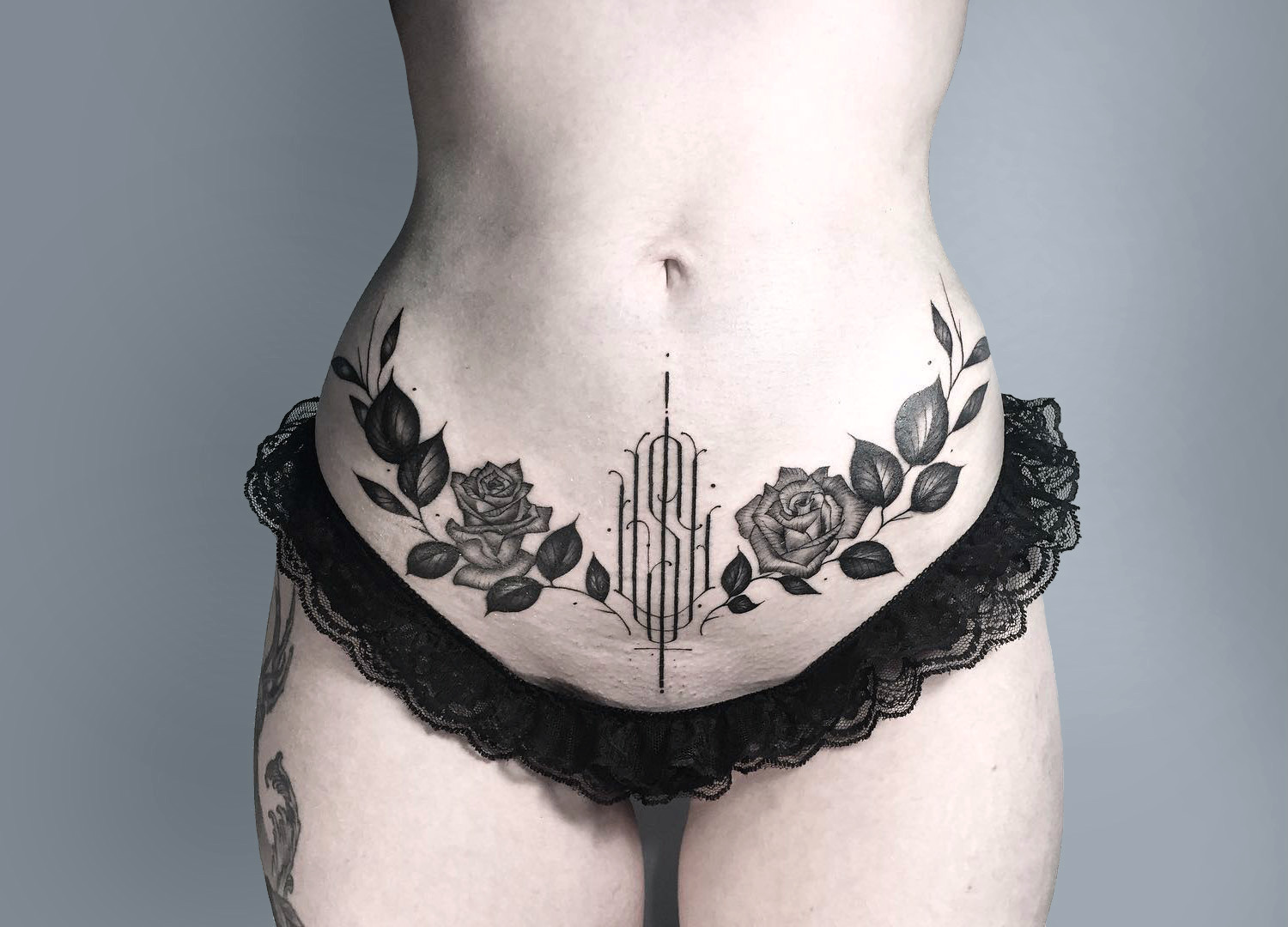 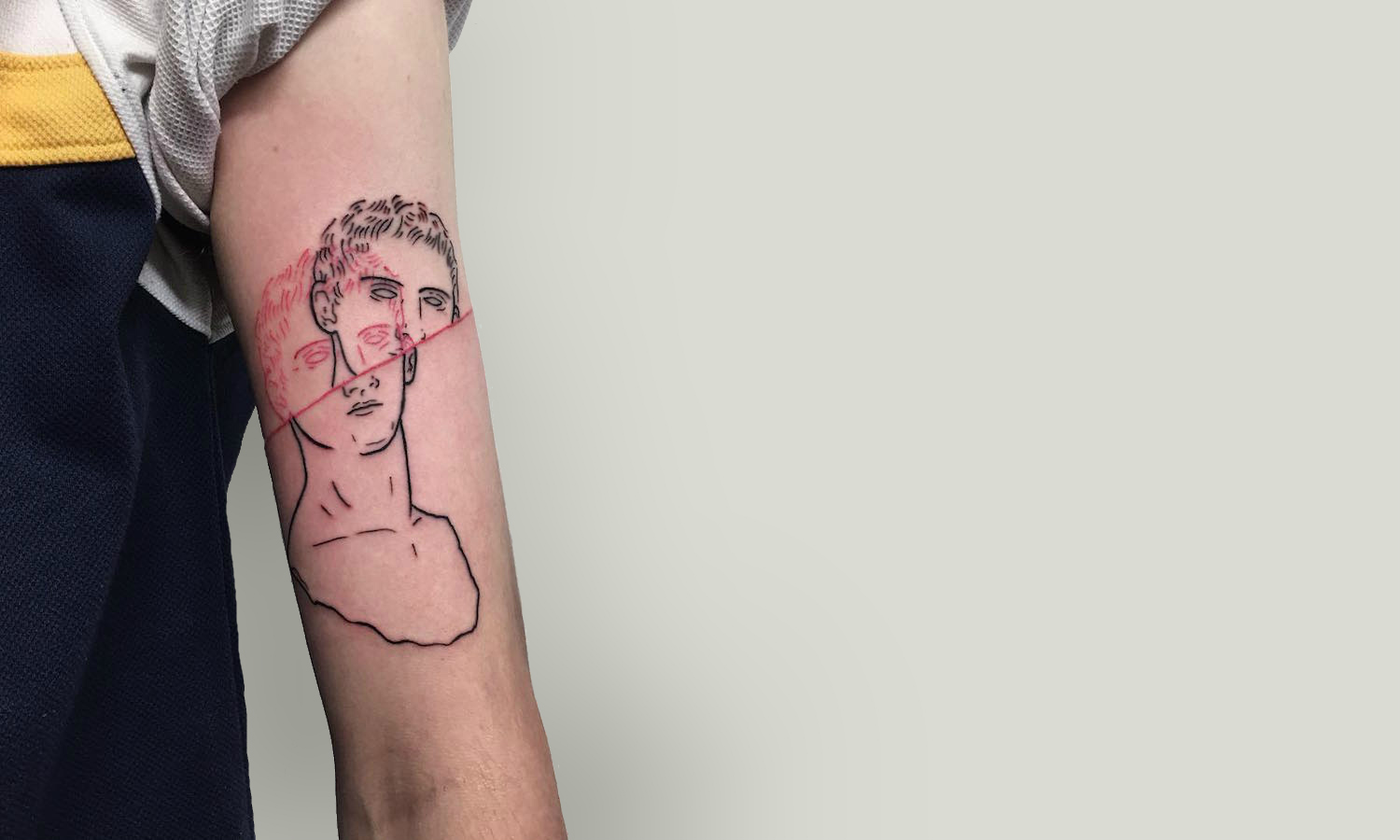 Melbourne-based illustrator Disinhibition confronts the status quo¬†with #ignorantstyle. This crude aesthetic “reflects the shift in tattooing away from traditional values and old school thought,” he says. “As a social movement, it fascinates me. Simplistic as the style is, it speaks volumes for the wearer, especially considering the rigid expectations and judgments that society places on our bodies.‚ÄĚ

Mocking western beauty ideals is a form of civil protest for this loud-and-proud queer artist. Harmony and¬†perfection, the core¬†standards of Greco-Roman Classicism,¬†are challenged by his statue series. Disinhibition’s sculptures glitch and crumble, imperfect by design. Each new piece expresses, ‚ÄúI am not the traditional identity. I reject these social norms.‚ÄĚ 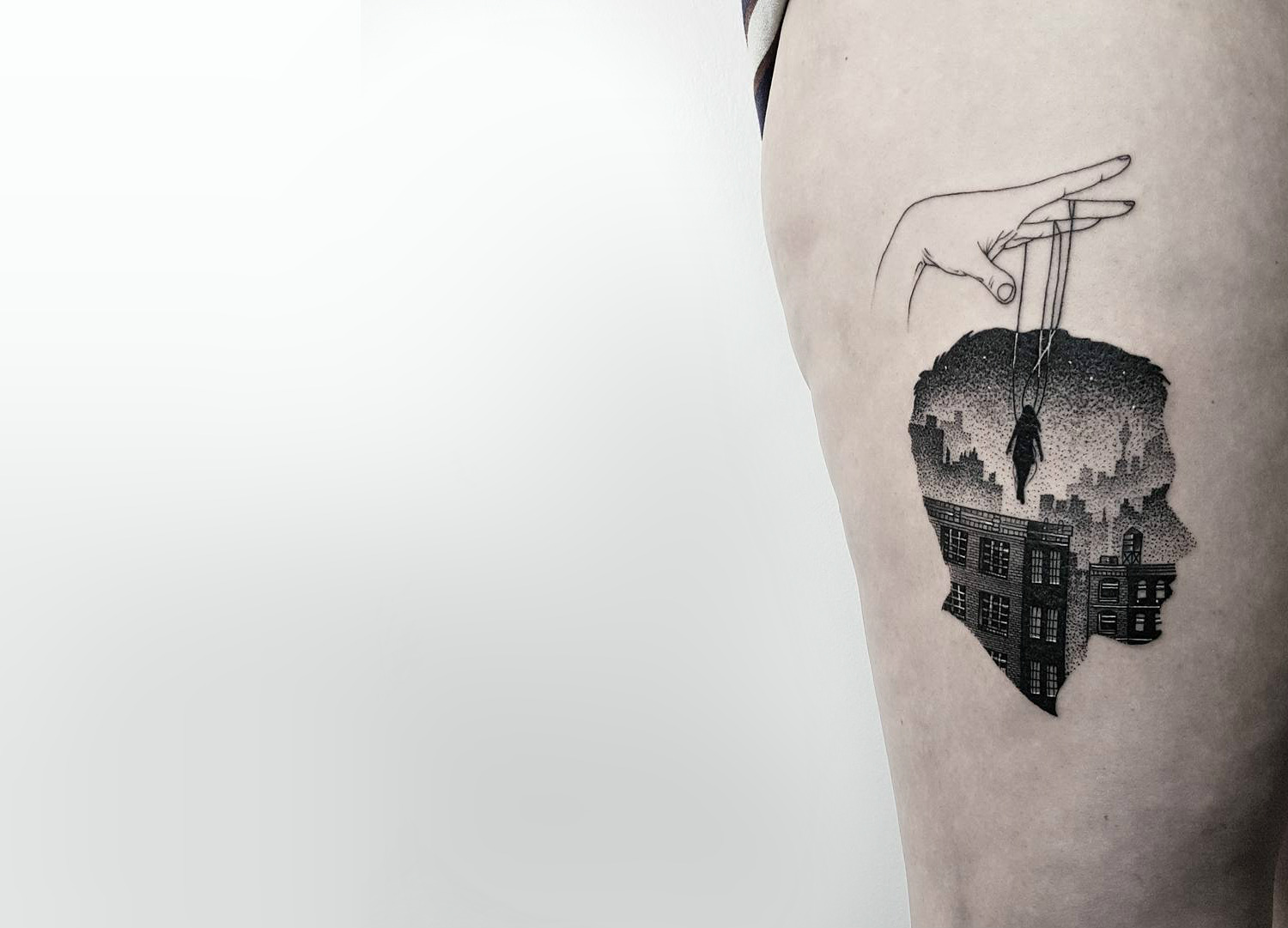 “Take Me Out From Routine” by Matteo Nangeroni.

Self-taught from YouTube, Matteo Nangeroni originally went to school for accounting, not artwork. ‚ÄúIt was February, 2014,‚ÄĚ he remembers, ‚Äúa strange month for me, because I left work for my dream.‚ÄĚ The¬†first tattoos were on his thigh, then on friends, until a studio accepted him.

Nangeroni‚Äôs training was built through humble persistence and hard work. ‚ÄúI got a piece from Marco Galdo and asked him questions about dotwork. I tried and tried and tried, making dots all day and night.‚ÄĚ First sacred geometry, then surrealism¬†and solid blackwork. “I‚Äôm not linked to traditional ways of working; mixing styles is what I love to do,” he adds. “Tattoo, for me, is freedom. And when someone gives me a piece of their skin, it is always an honor.‚ÄĚ 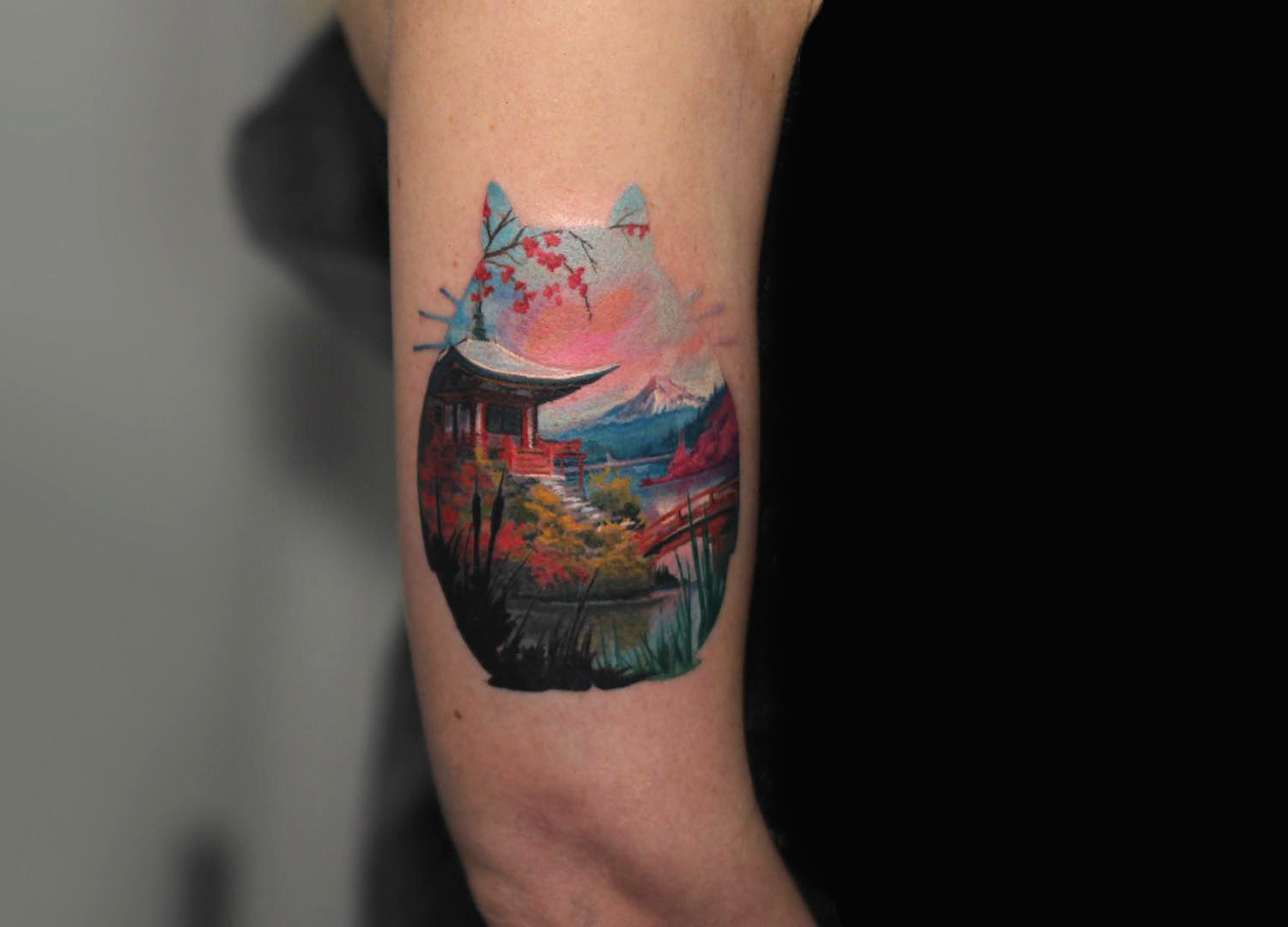 ‚ÄúI’ve been doing abstract works recently and really enjoy it.‚ÄĚ He describes¬†the freedom that comes from a creative change of pace. ‚ÄúIt‚Äôs the opposite of the detailed realism I do every day, so it gives me a chance to loosen up.” New York‚Äôs diverse clientele bring fresh ideas, too, from optical illusions to conceptual paintings. ‚ÄúI like to work with clients who are open minded, and see it as a collaborative process,‚ÄĚ always exploring new¬†territory together.