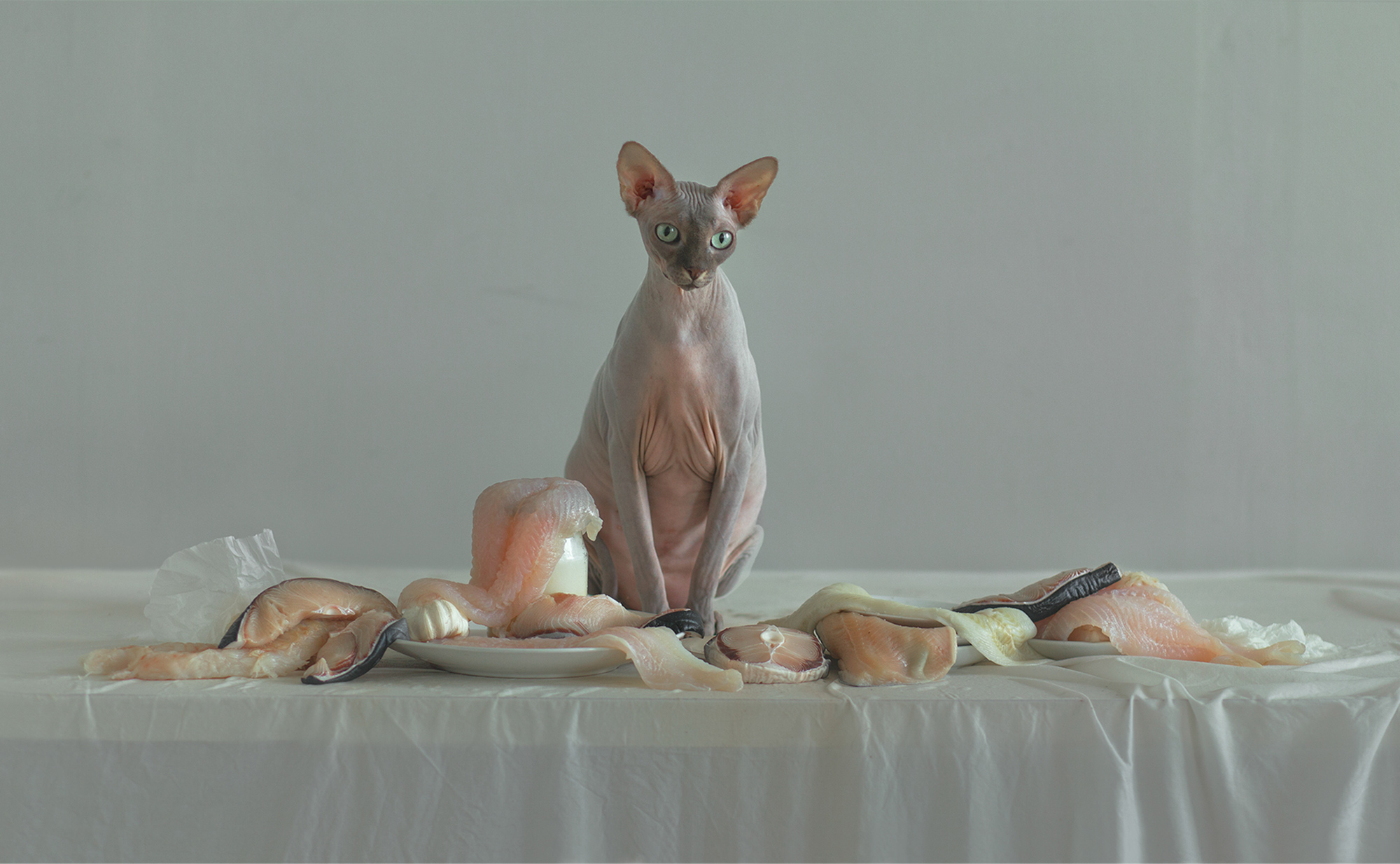 If you enjoy dark art, chances are that you’ve encountered the incredible work of Slovakian photographer Evelyn Bencicova. I’ve written about her work twice before, describing each photo as an “otherworldly vision” of beauty that “extends into the alien and absurd.”

Born in 1992, Bencicova bought her first camera after she had eye surgery at the age of eighteen. Since then, sheâ€™s been honing her craft, drawing inspiration from surrealist film directors and the general absurdism and beauty of the world. By placing the body in strange places, such as hospital-like rooms and derelict schools, Bencicova explores the way human essence and architecture mirror each other. Like a formÂ of interpretative dance, the body becomes aÂ mode of expressionâ€”a symptomâ€”for something much broader; subjectivity is dissolved into the universality of lived experience.

“An Organic (Still Life)” and “School of Life,” featured here, are two series that Bencicova produced withinÂ the last year. I had the opportunity to talk withÂ her about these new images, as well as the creative process that makes her style so unique.

Top: The skin of the hairless cat and the raw fish resemble each other in an uncanny way. 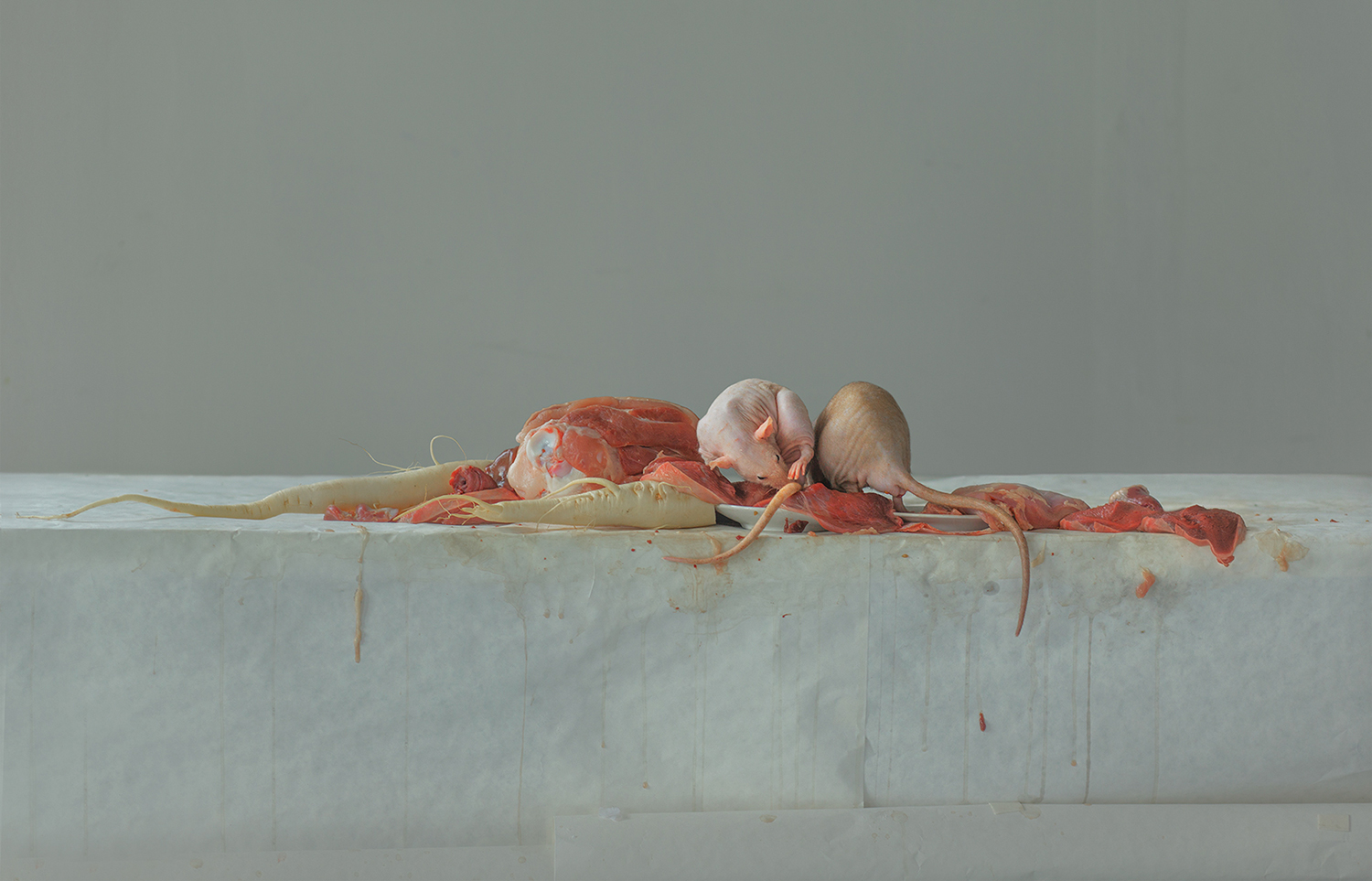 This image combines motifs of waste and cleanliness in provocative ways.

Was there a particular moment (such as a photograph you took or a project you did) whereÂ you knew you wanted to be a photographer?

It is not easy to track the first impulse which started my photography interest. Of course, real practice started with owning a camera (this was at the age of eighteen, after eye-surgery, which hugely improved my ability to see), but I believe that my visual sensitivity developed much earlier. I grew up in a huge housing estate where all you could see around you were the windows of other people. They seemed like hundreds of identical screens, but always with a different story. As a child I used to observe all these people through these rectangular frames, building my whole imagination on very few details which fit inside. But I always knew more than I saw; I imagined the whole flat, the entire reality, and my fantasy always worked in pictures. 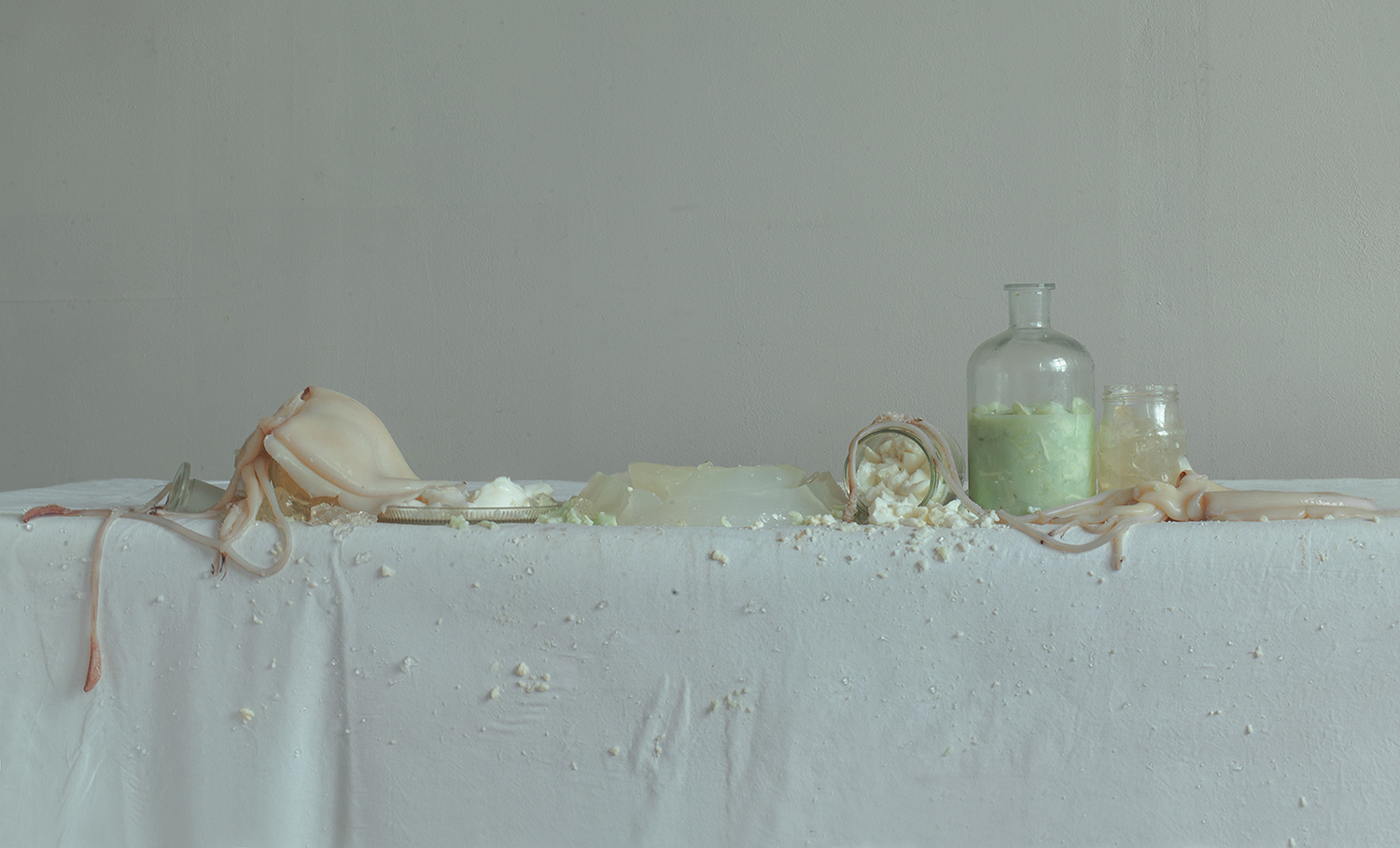 You may lose your appetite for seafood.

Which artists and/or philosophers inspire you?

I have to admit that I often seek for inspiration outside of photography. I really like movies from Roy Andersson or Andrzej Zulawski, but I also adore the paintings of Theodore Gericault or Egon Schiele. The world is full of interesting things if we look at it with open eyes and an open mind. 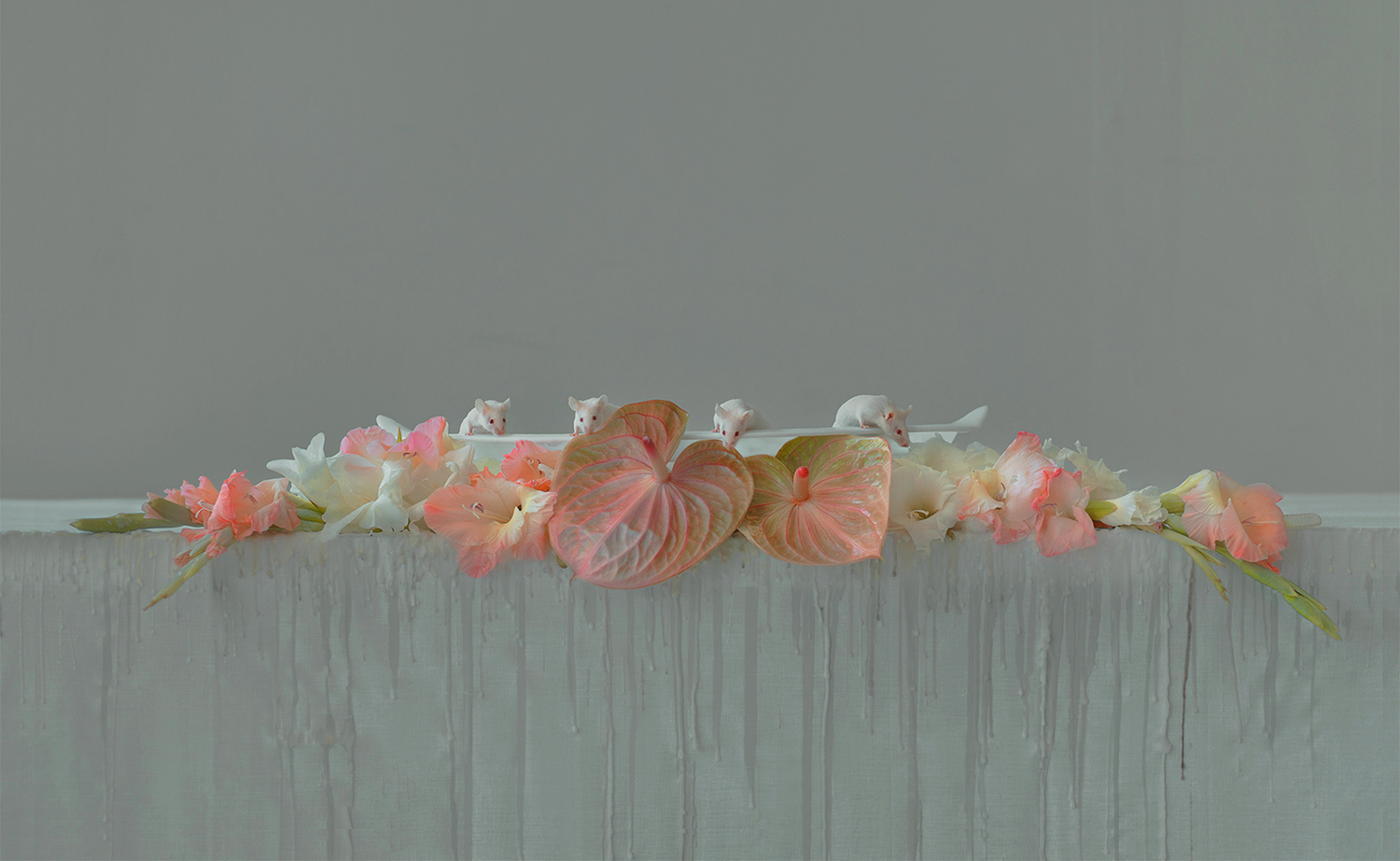 The symmetry of the albino mice (often associated with laboratories) seems cute and unsettling all at once.

Every photograph you take is almost theater-like in the way youâ€™ve lined people and objects up to tell a story. Everything seems symbolic, and highly intentional. What would you say you are seeking to represent in your work?

I would say that a photographer’s projects always work in layers. There is an aesthetic side of the photo that drives attention to its concept. Our work often deals with general topics, which can be read and understood by the viewer, but it also includes more personal, hidden messages and references to our private issues. Most of the scenes are staged, but there is also a lot of improvisation. We, as photographers, like to be inspired by the atmosphere on set, and we always find some chaos where there is a pre-planned structure. 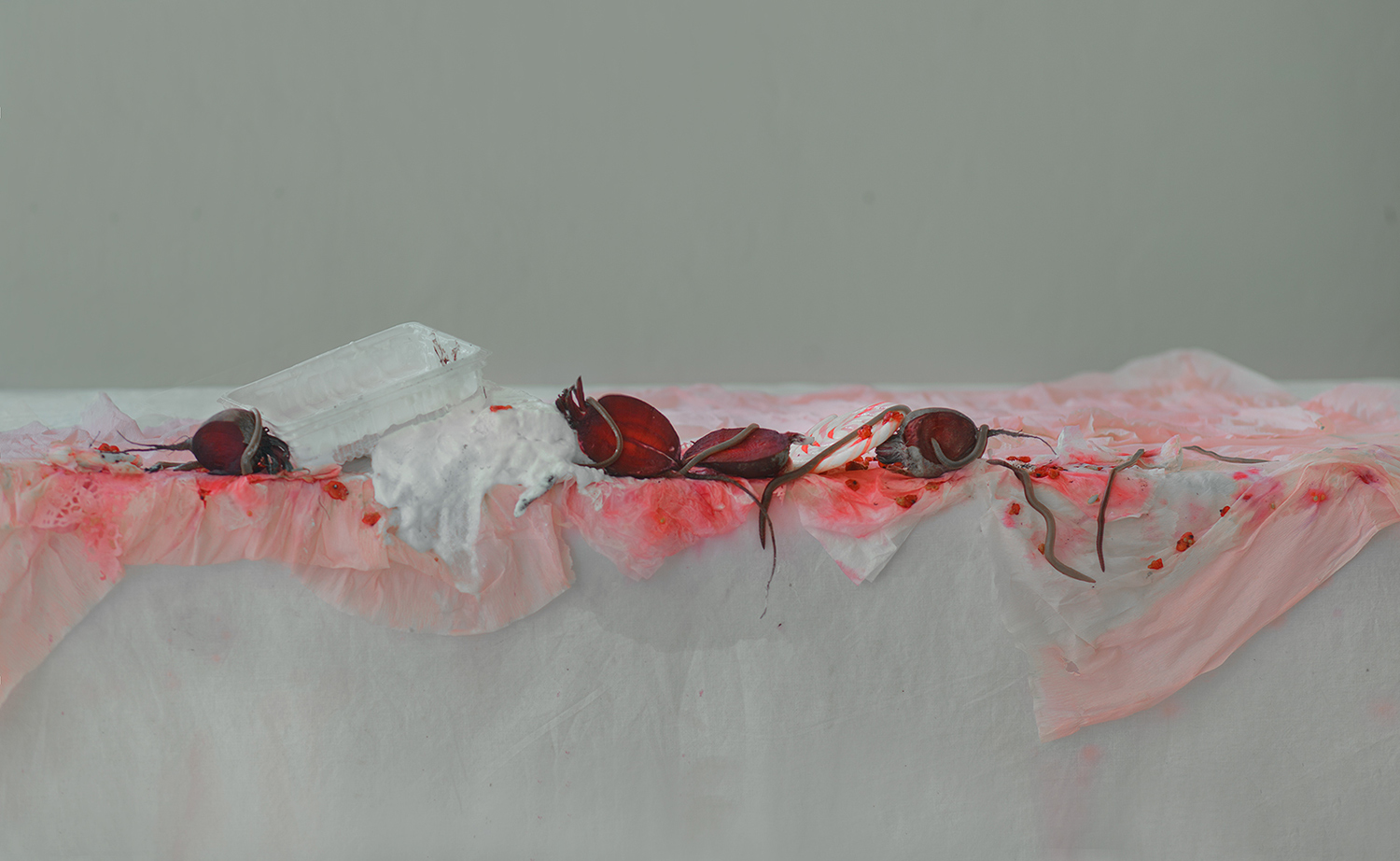 The “bloody” mess bleeds into the surrounding world.

Many of your images from the series â€śEcce Homoâ€ť feature people posing nude and forming structures with their bodies, looking pale and as ifÂ they are in a trance. They almost seem alien, but “Ecce Homo” means “behold the man.” What core aspect(s) of humanity are you exploringÂ in these photos?

“Ecce Homo” is about essence of human bodyâ€”its physicality and fragility at the same time. The subject is stripped of their identityâ€”which is normally created by face or clothesâ€”and reduced to a creature of flesh and blood. The scenes are set in public spaces, and they refer to human behavior in society, especially critical situations when we are treated as numbers rather than individuals. 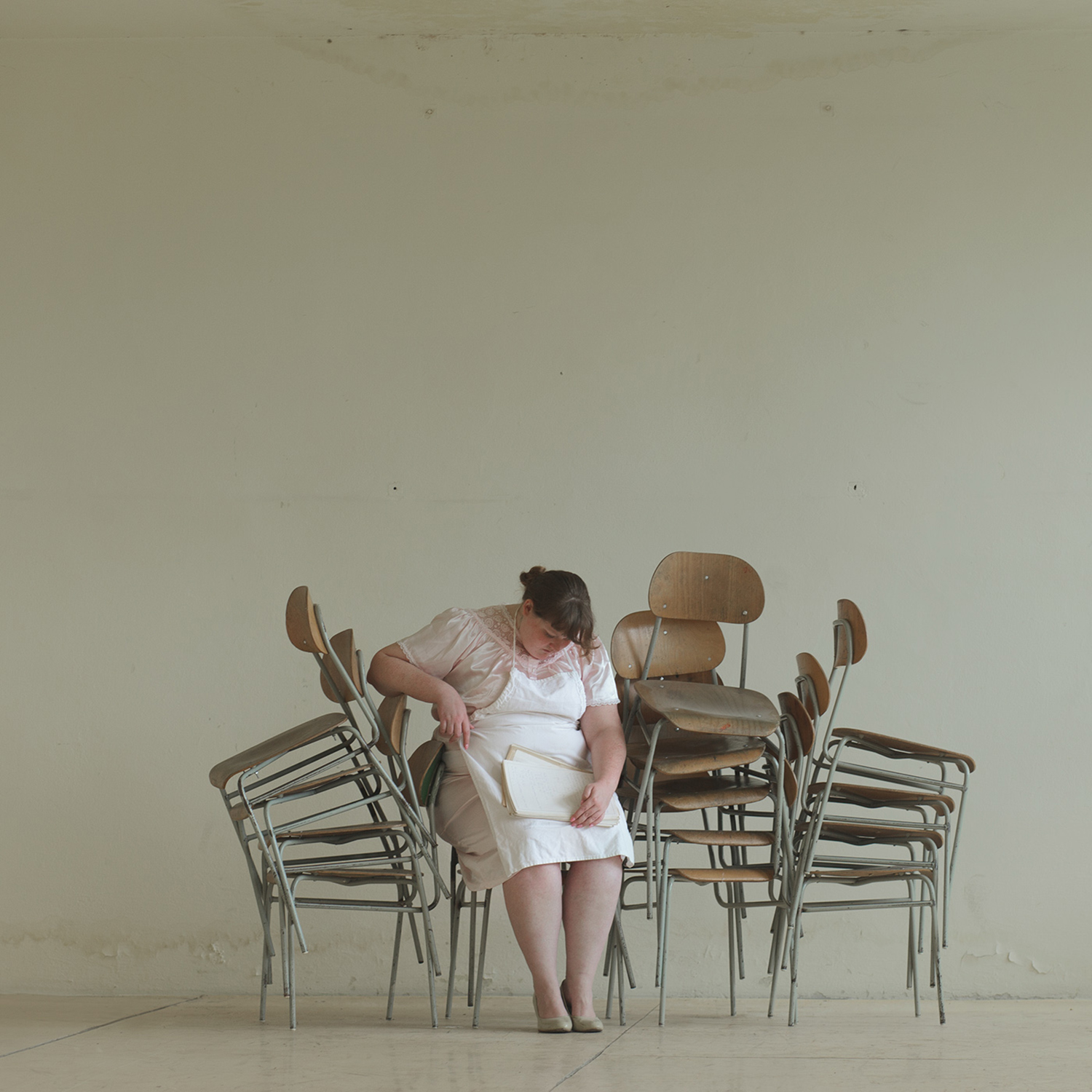 Sadness and exhaustion pervade this photo.

I love your new series, â€śSchool of Life.â€ť The way you portray the schools as empty and derelict is very beautiful and unsettling. What was your inspiration for this series?

The inspiration comes from an empty chemistry school in Slovakia that is being turned into new creative center. This project deals with nostalgia as it is connected with the destruction of architectural remains, which are a part of our cultural heritage, serving as a recreation of an already-vanishing past. I was guided by the space itself, and I created the first (but also maybe the last) representation of its atmosphere before its reconstruction. 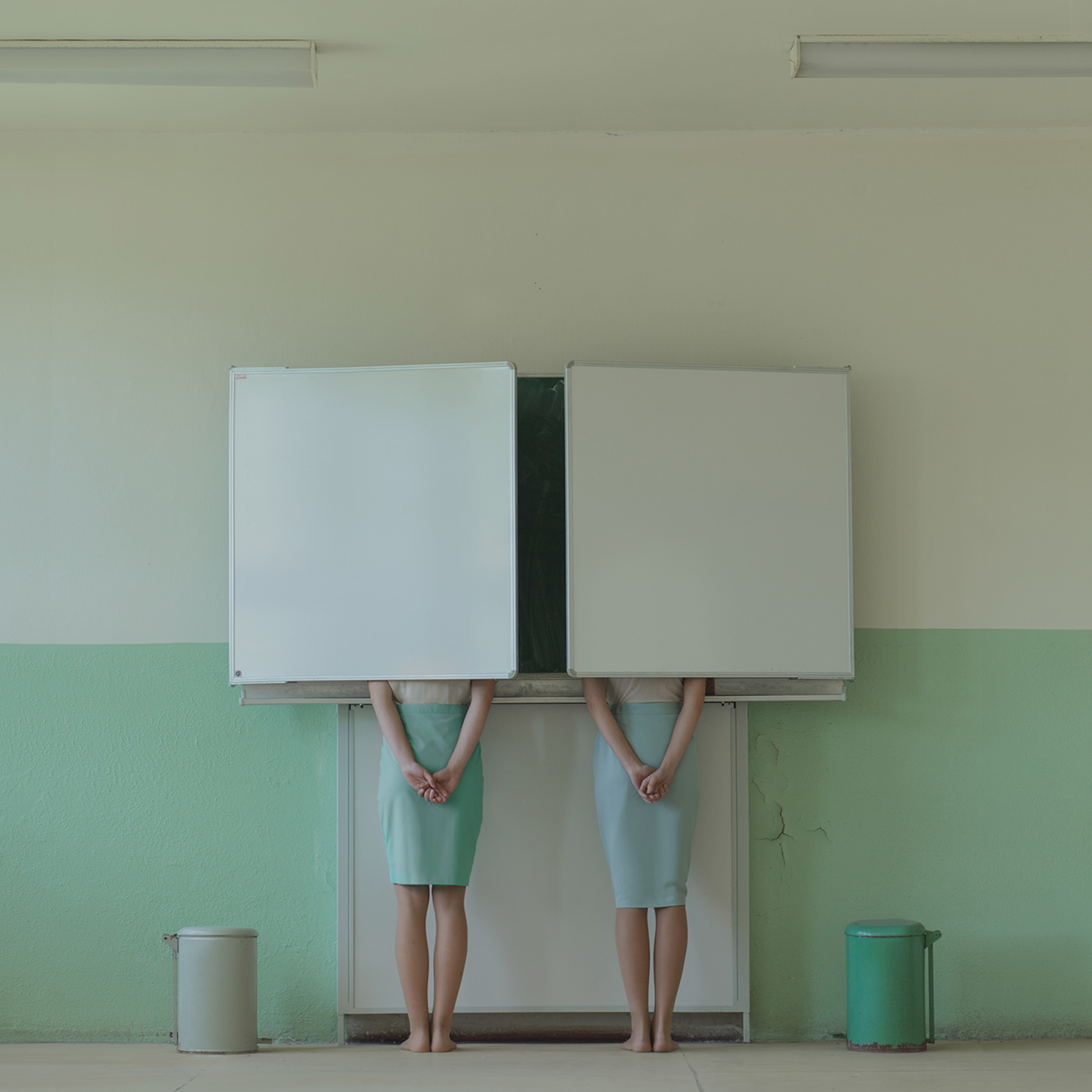 Bencicova often strips identity from the subjects by obscuring their faces and bodies in creative ways.

“An Organic (Still-Life)” is also very beautiful and unsettling. What do you feel is the effect of juxtaposingÂ hairless animals, raw meat, and bright colors with white backdrops and white sheets?

The still-lifes form an organic landscape around the animal; it is a kind of extension of the animal’s body, inspired by structure of its skin or even the nature of its character. 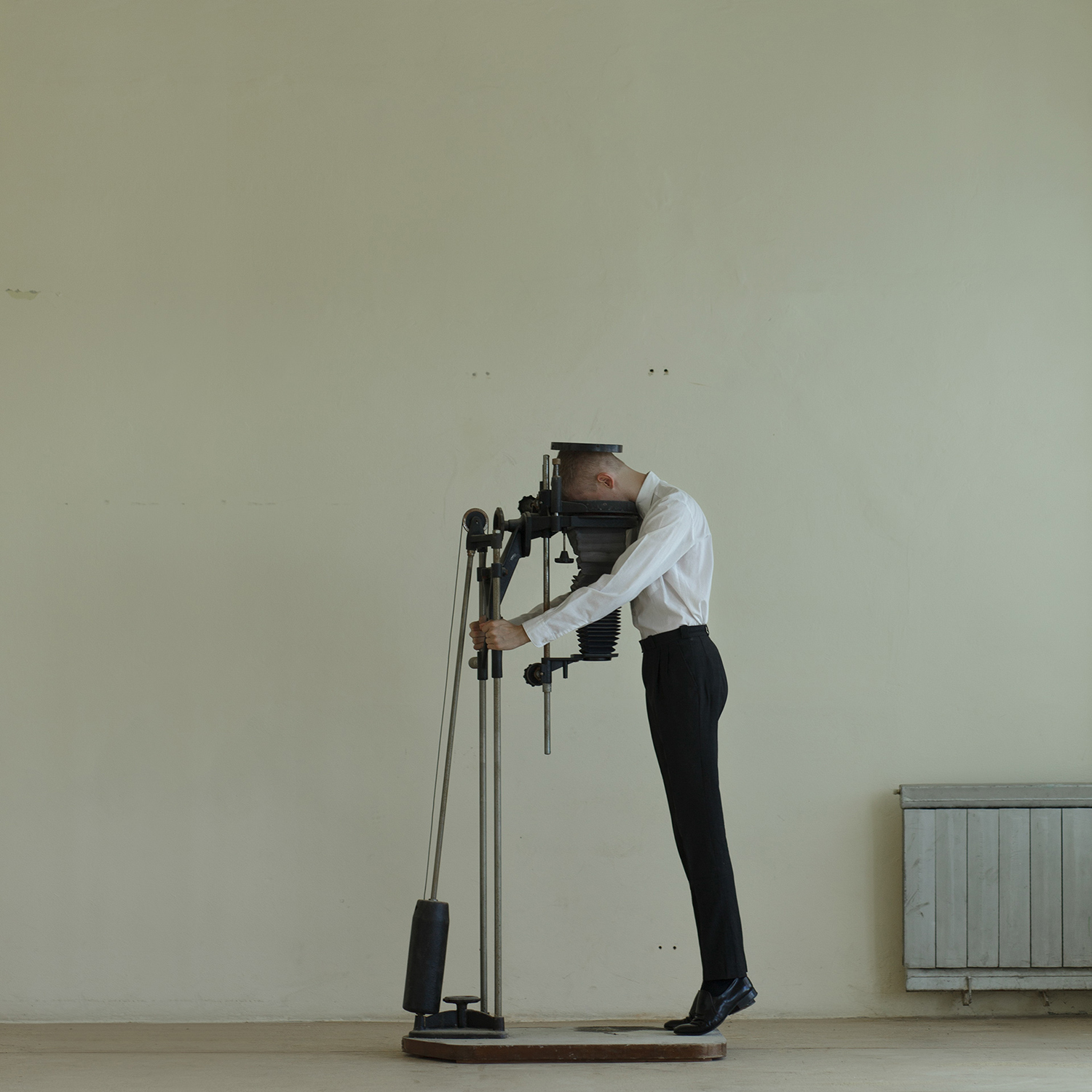 I know itâ€™s still early in the year, but do you have any projects or series we can look forward to in 2017?

There is a lot in development, but nothing is ready yet. Our projects usually develop as a process, so if there is a point where it is easy to describe my work, it is the the end.