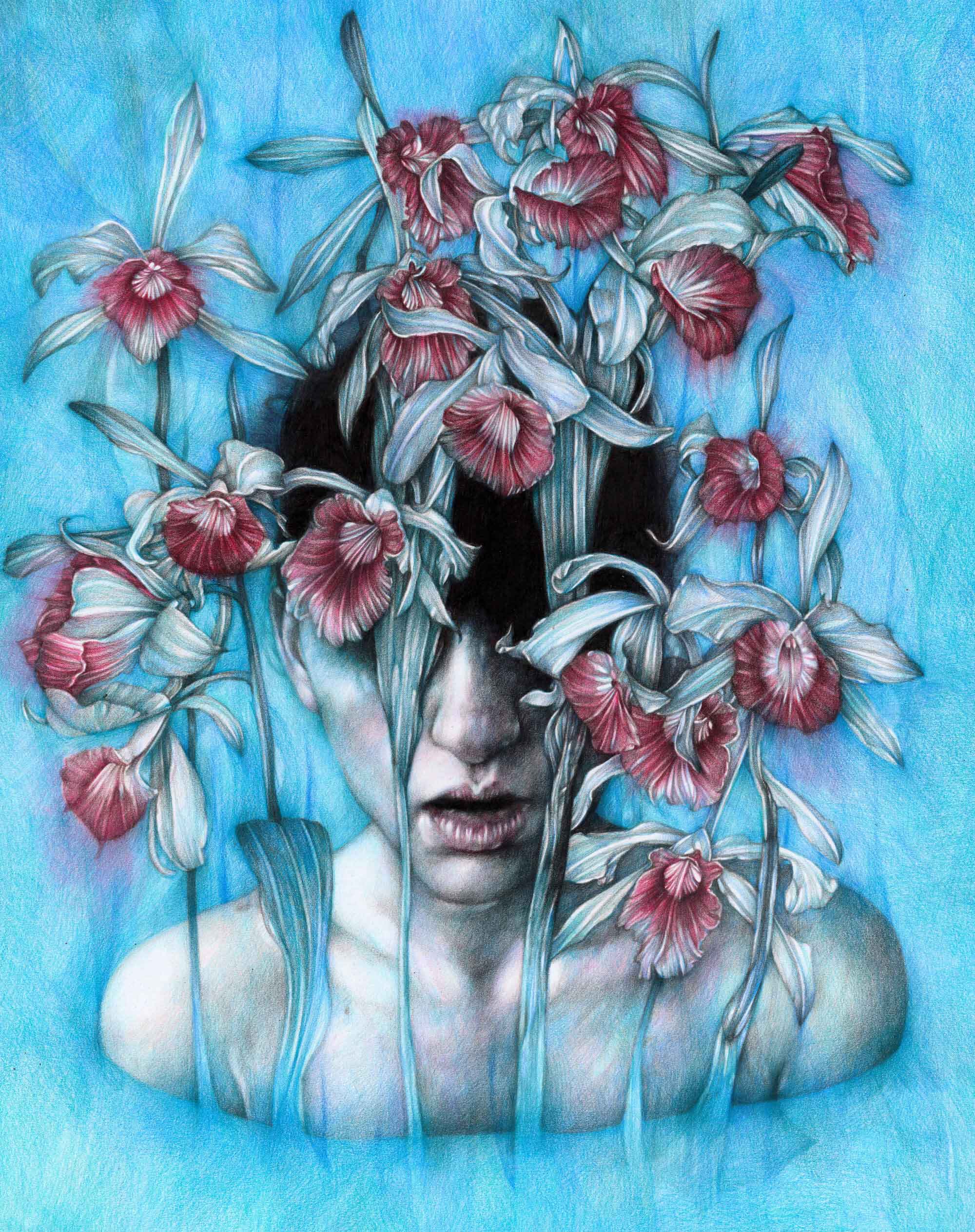 Italian artist Marco Mazzoni has used colored pencils in his work since he was very young. Although some abandon the medium as they get older, Mazzoni continued to hone his pencil technique into something truly spectacular. He fuses colors into smooth, silky blends that resemble oil paintings.

Although Mazzoni depicts elements of beauty, his work takes a dark turn. Finding inspiration in today’s society, he often obscures and distorts part of the human face—a metaphor for the relationship of mankind. Flora covers the eyes, escapes from the mouth, and makes it impossible for his subjects to look beyond what’s in front of them. As the world seems to grow increasingly volatile, this lack of stability feels especially relevant. We are all the figures that Mazzoni painstakingly crafts.

Mazzoni keeps himself busy. He’s preparing for an upcoming show at the Thinkspace Gallery in Culver City, California, that’ll open on March 4, 2017. Aside from making 2D work, though, he’s ventured into the world of 3D. Working with This is a Limited Edition, he created a cup and saucer set that focuses celebrates florals in full bloom. I caught up with him to ask a few questions about his most recent work.

Mazzoni calls this “Regret,” and it’ll be in his upcoming show called “Dear Collapse.” 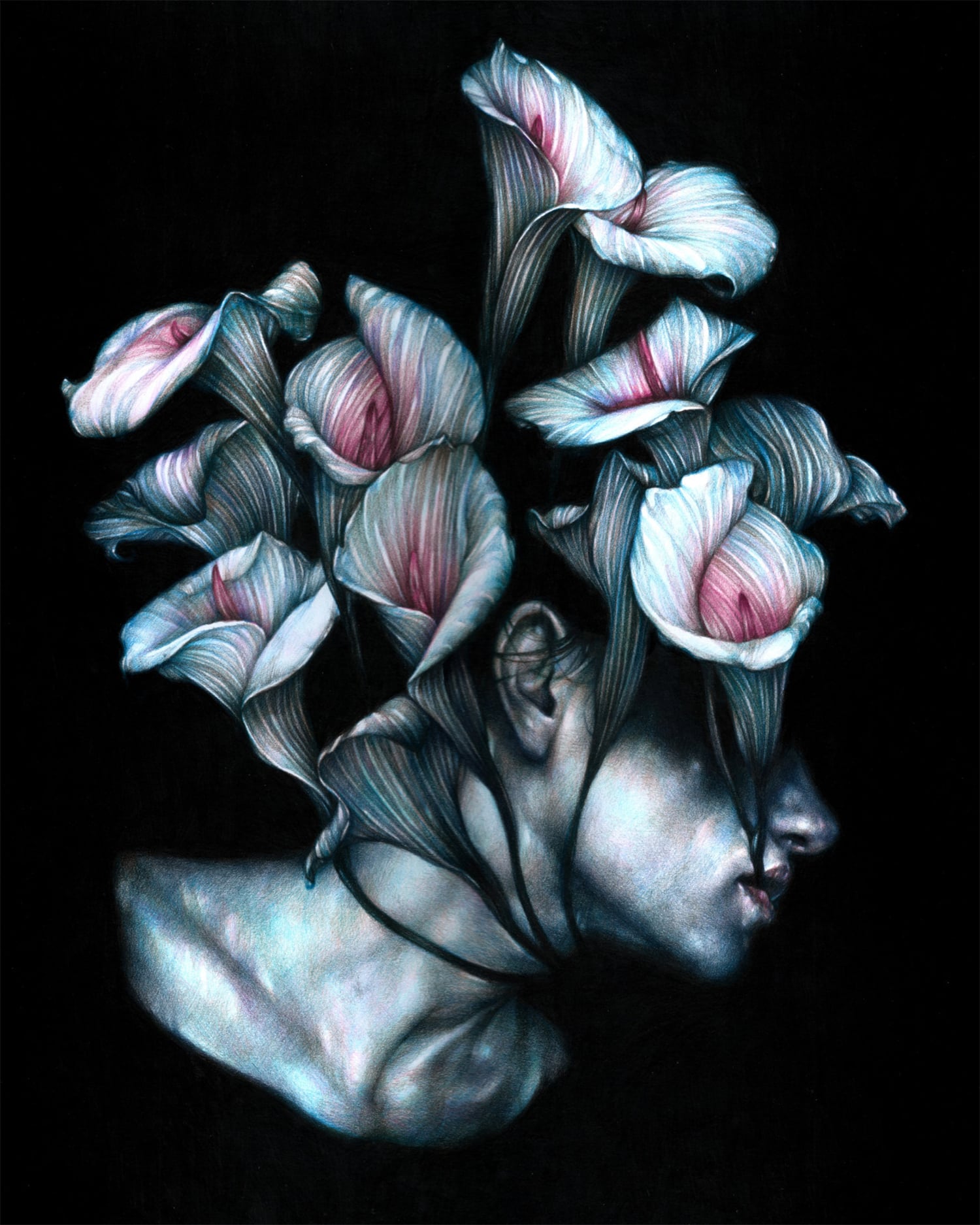 What is your artistic background? How do you see your past—artistic or otherwise—influence your current drawings?

The artist I looked up to the most in my early years was definitely Renzo Vespignani, a not so famous Italian artist and draughtsman, whose works taught me to think of a simple drawing as a complete and fulfilled work of art. When I saw the works by this artist for the first time, I immediately began drawing human faces and hands and I haven’t stopped since then in my daily practice with drawing.

My roots are strongly bond to the Sardinian culture: the typical iconography of Sardinian folklore focuses on the female figure both positively and negatively. To me, the most important characteristic of this imagery is that the woman is always an active figure. Therefore, I based all of my work on these icons. 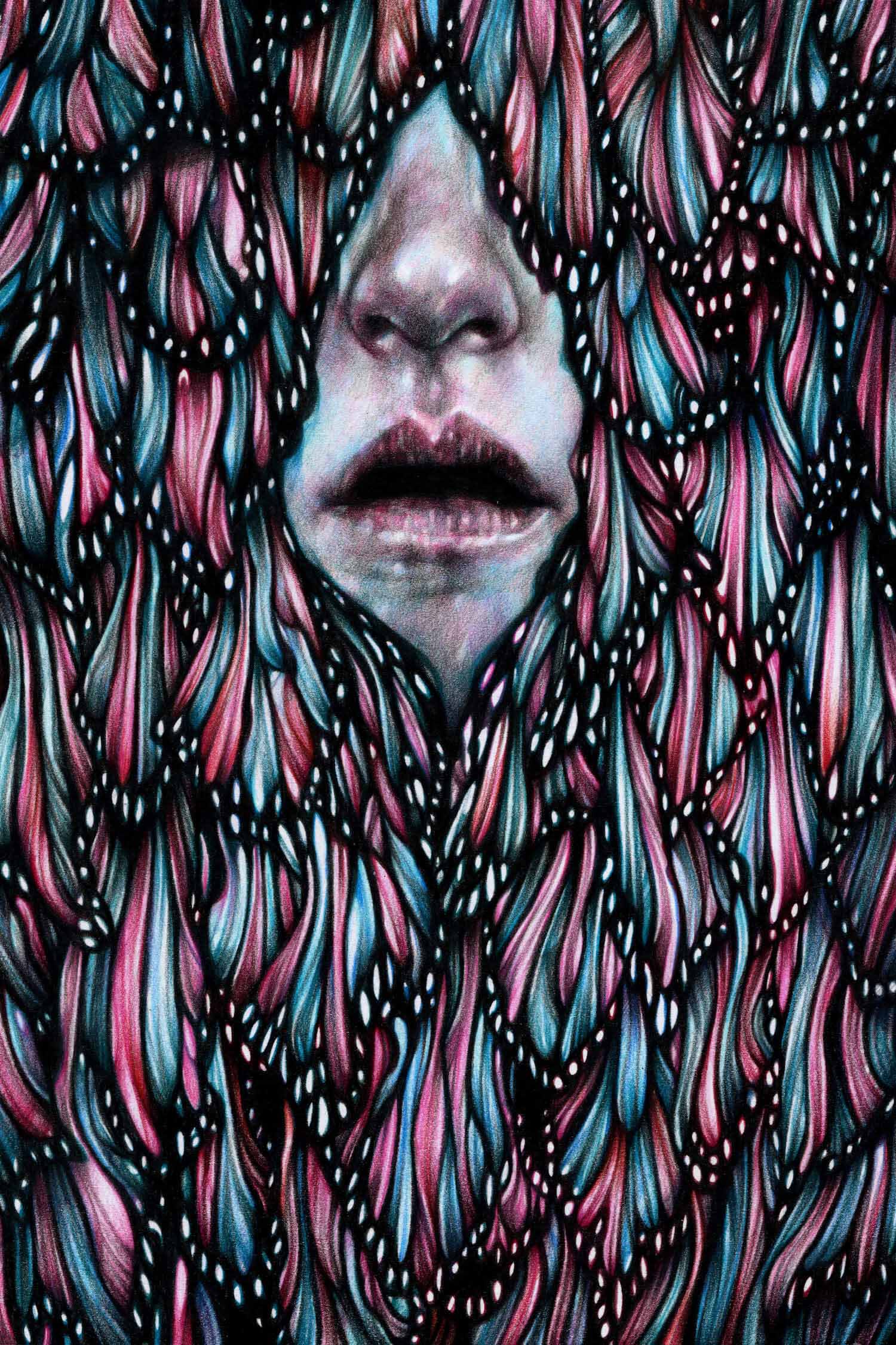 What inspired you to work with colored pencils? What has kept you interested in them as an artistic medium? Do you think you’ll ever work in something else?

I have always used colored pencils since my early childhood, so they are definitely the medium I am more at ease with and know best. What I find interesting about them is that through colored pencils on paper, universally considered as a “poor” combination of mediums, you can still give your artwork a quality comparable to that of an oil painting.

My whole life until now has been accompanied by colored pencils and I will keep up with them for the longest time. 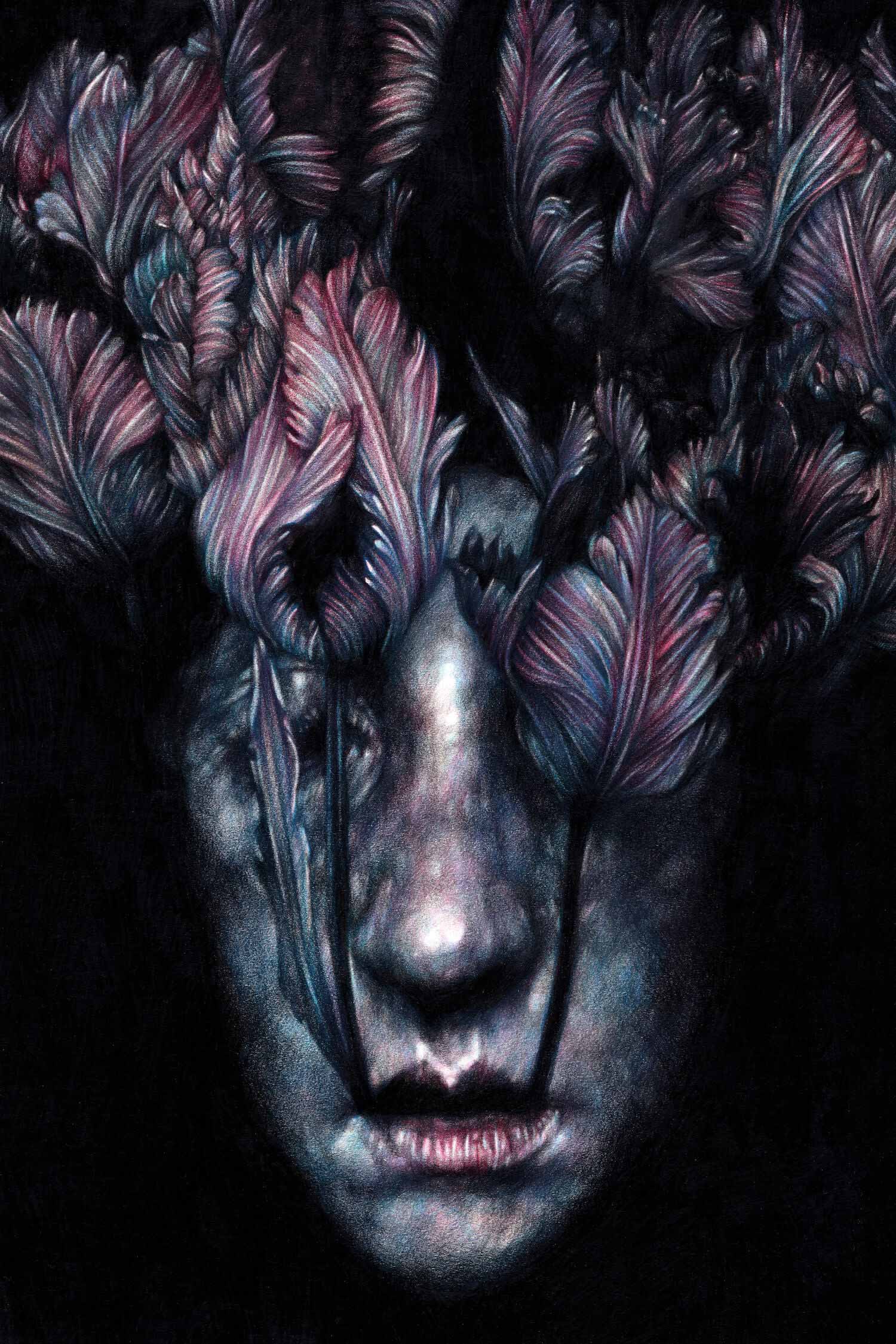 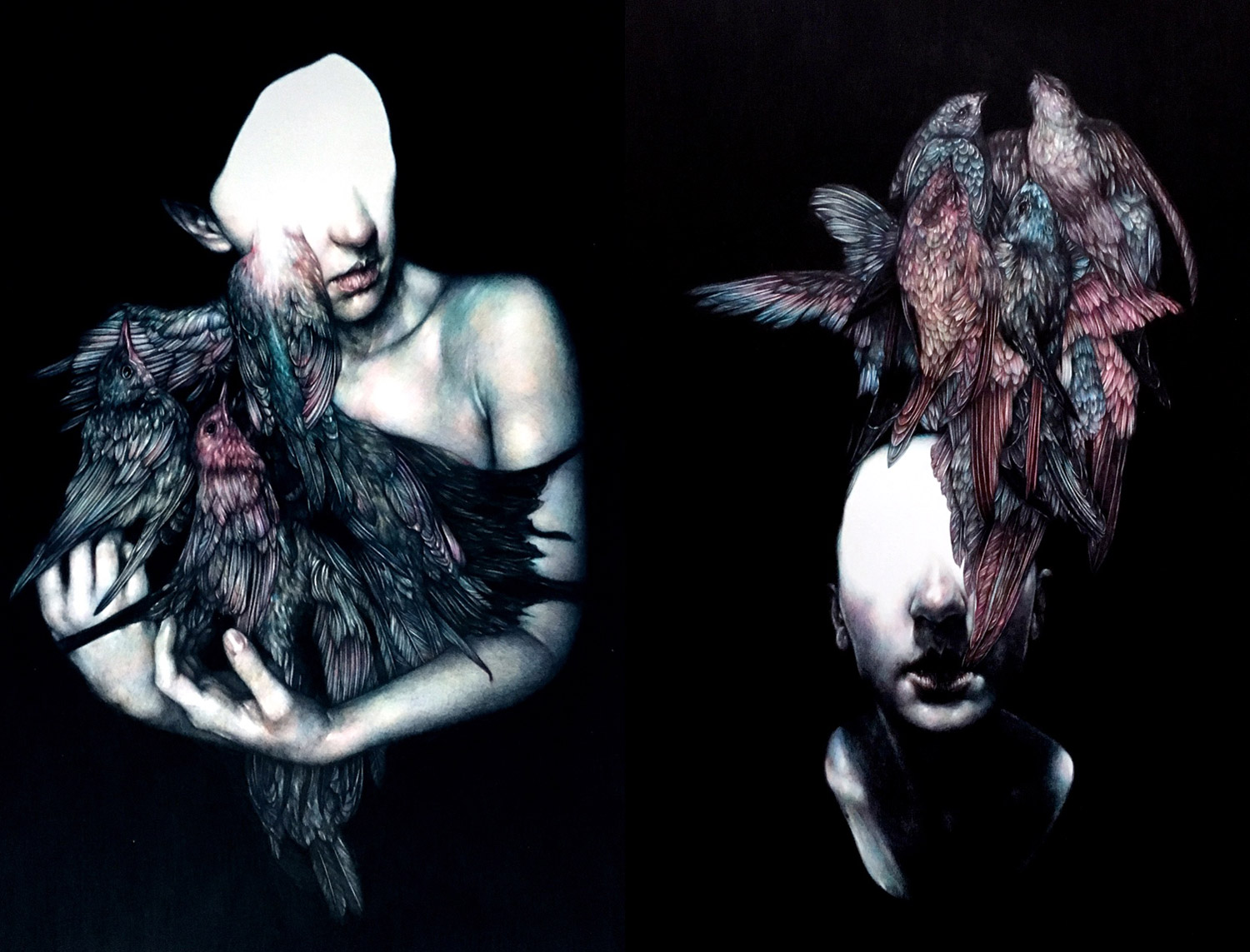 By distorting the eyes, we focus on the human in general.

Why do you obscure the faces of your portraits?

What I have always tried to do is not THE portrait but A portrait. Obscuring the eyes I lead the viewer to focus on the human subject in general and not on a specific face. This allows me to use a single subject in order to visually talk about many topics, making my work way more referable to general society rather than to a person in particular. 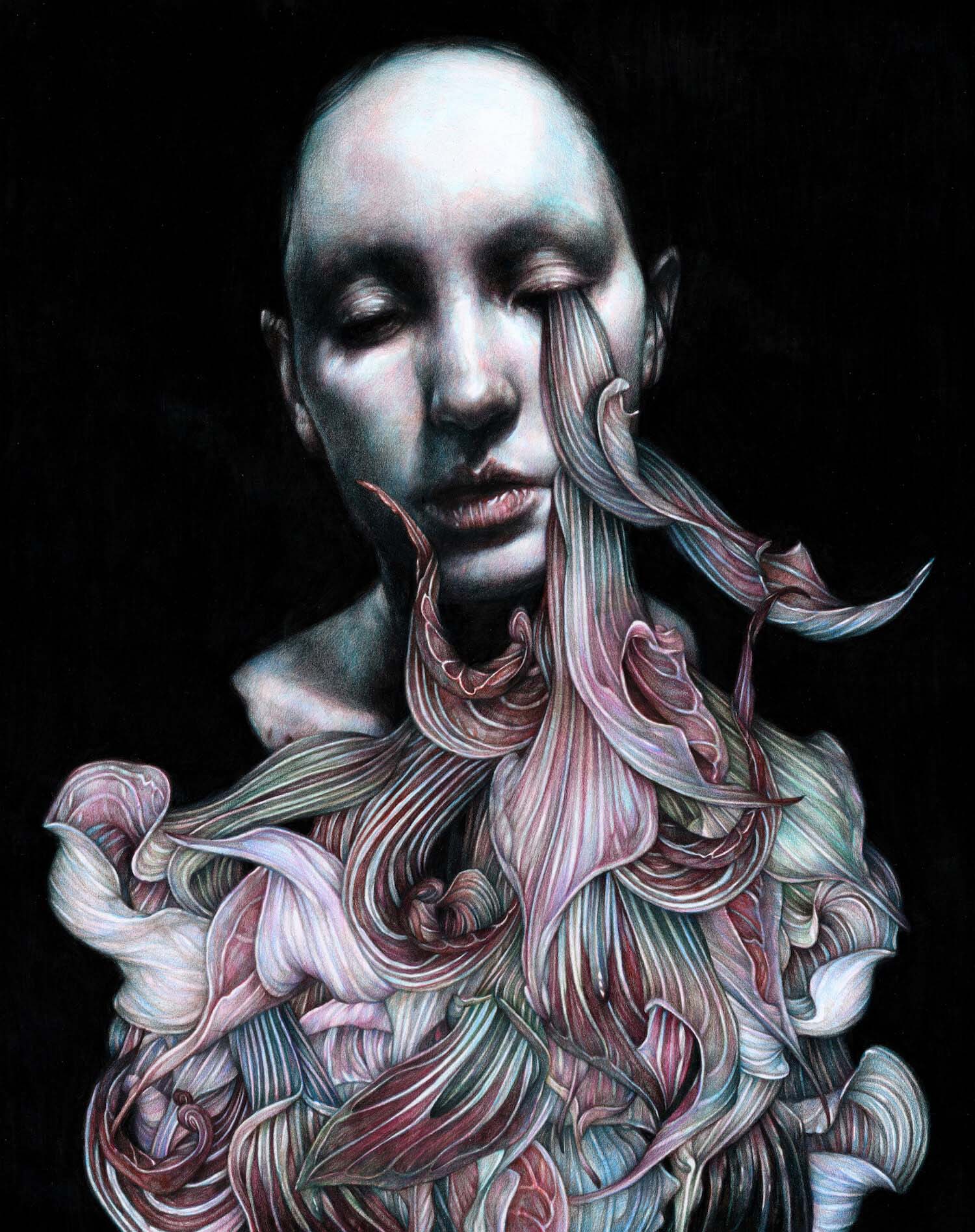 What are some ongoing themes that have remained in your work?

I have always tried to talk about the contemporary man dealing with society, therefore his/her relationship with nature, although this is meant as a metaphor for the relationship between mankind. Little by little, in fact, both the artworks and the titles have progressively been shifting their focus on the sensations that a human being feels while interacting with other people; for instance, the titles “Regret,” “Insecurity,” “Compassion,” refer to feelings that are uniquely linked to the relationship between people. 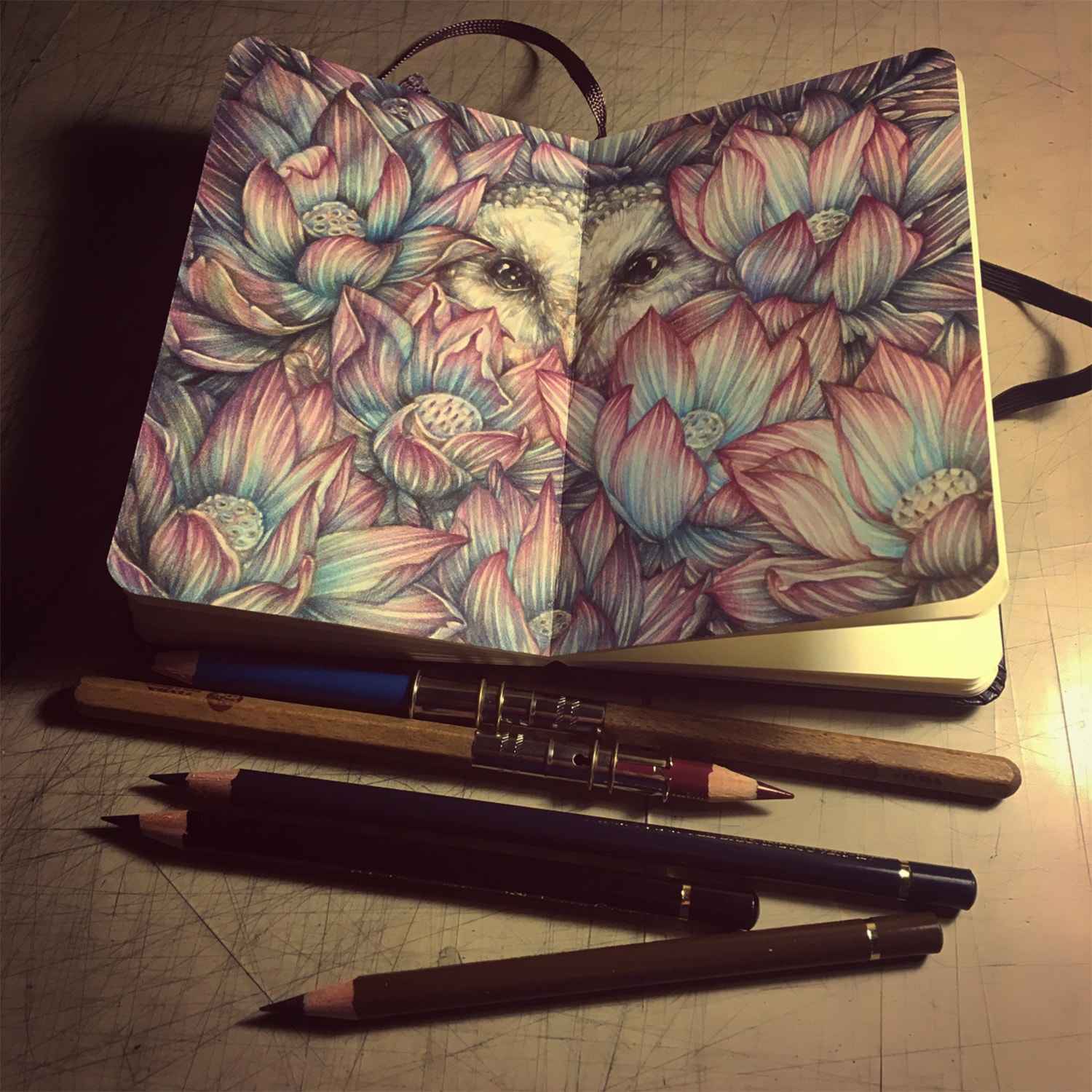 The work in his sketchbook is just as valuable as the drawings done outside of it.

Your sketchbook is regularly featured on your Tumblr. How does it factor into your artistic practice?

I have always considered my drawings on Moleskine as complete artworks. As a viewer going to exhibition and shows I find it really pleasant and interesting to see the sum of the artworks of an artist in their totality, including scraps and sketches, because it allows me to understand completely the artist’s work and way of thinking. This said, at my solo show at the Thinkspace Gallery in March, I will show an entire sketchbook filled with drawings from the beginning to the end, which will represent my inspirations and the process through which I assembled the whole show, mostly featuring studies of different facial expressions, color palettes, and copies in colored pencils of works of art by the old masters such as Ribera. 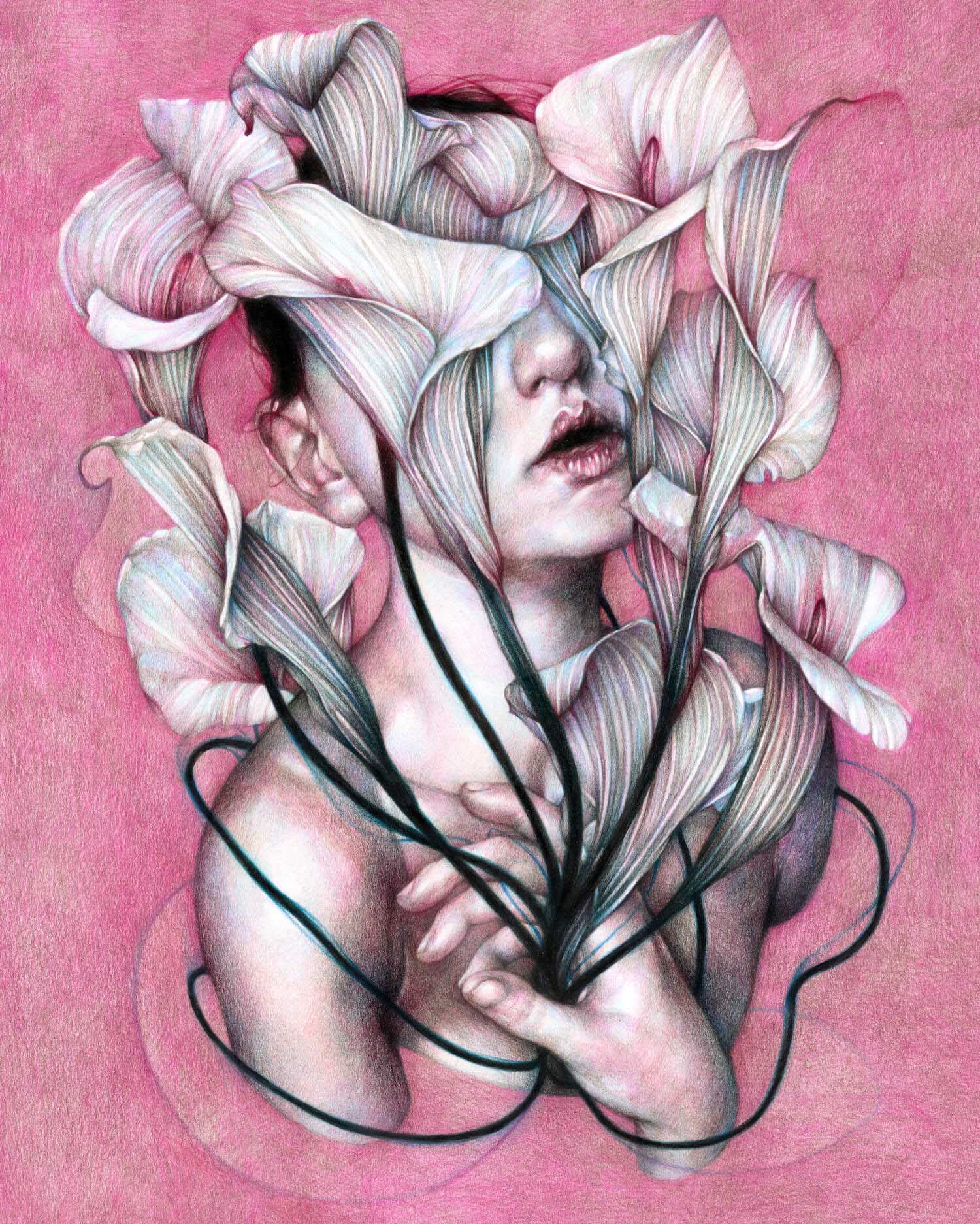 Mazzoni’s drawing “Insecurity” will be displayed in a new art show at Thinkspace Gallery.

For your upcoming show at the Thinkspace Gallery, you’re calling it “Dear Collapse.” What can we expect when we see that show?

The title for my show is inspired by a friendly talk I had with Vasco Brondi, a famous Italian songwriter, best known as “Le Luci della Centrale Elettrica.” I have always been fascinated by the way he plays with synesthesia and many other figures of speech within his lyrics.

In this show I try to underline through my artworks the sensations, mostly negative, intervening between people. For instance, when a human being interacts with another human being, the feelings that show up in this encounter are very similar to those we can retrieve in the world of animals. Although passive, we are always talking about violence.

“Dear Collapse” comes from this violence that we seem to despise but in fact we love, just as the relationship with people, that we socially need but at the same time can lead us to perish.