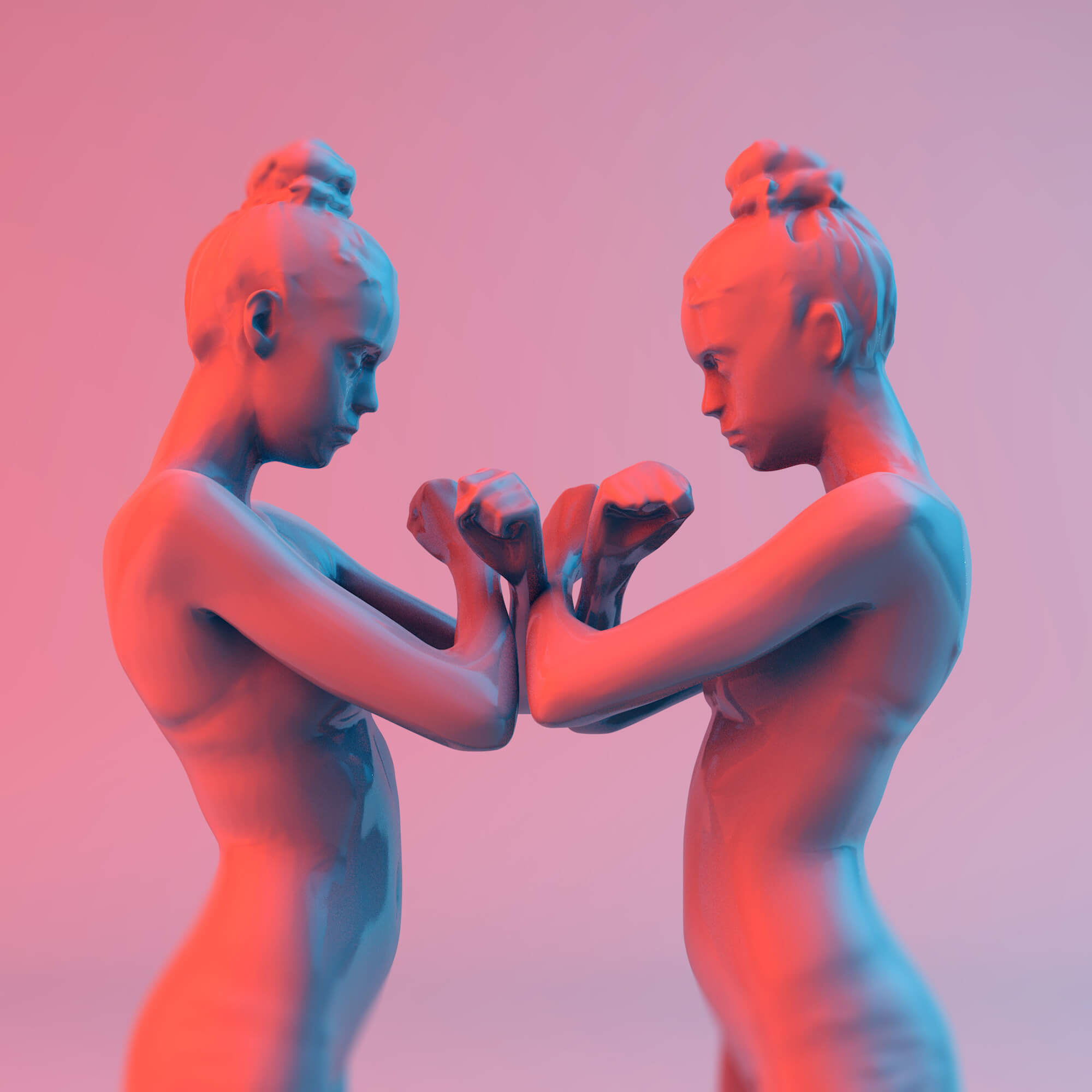 As the definition of art continues to grow, the field increasingly becomes technologically advanced. Three dimensional (3D) graphics take advantage of this advancement to create imagery that straddles the line between reality and fantasy.

The term “computer graphics” was first introduced in 1960 by William Fetter, but it wasn’t until 1972 that 3D animation began to appear.“A Computer Animated Hand” was an experimental short film by University of Utah students Edwin Catmull and Fred Parke—the first of its kind. In it, a digitized model of a hand as it swivels, opens and closes, points to the viewer, and zooms to the inside palm. Although crude by today’s standards, it was groundbreaking and inducted into the National Film Registry in 2011.

Nowadays, there are multiple ways to render an object and bring an artistic vision to life. Depending on the amount of realism a digital artist wants in their work, they can use techniques such as ray tracing or radiosity to simulate natural lighting. This produces work that’s both eye-catching and technically amazing—the crisp lines, supple forms, and life-like textures produce imagery that’s so real, it’s scary.

Ello has a community devoted curating the best in 3D art. Here are 10 artists whose digital works will amaze you with their complexity and imagination.

Above: Matt Nelson sculpts stoic figures in a warrior-like pose. 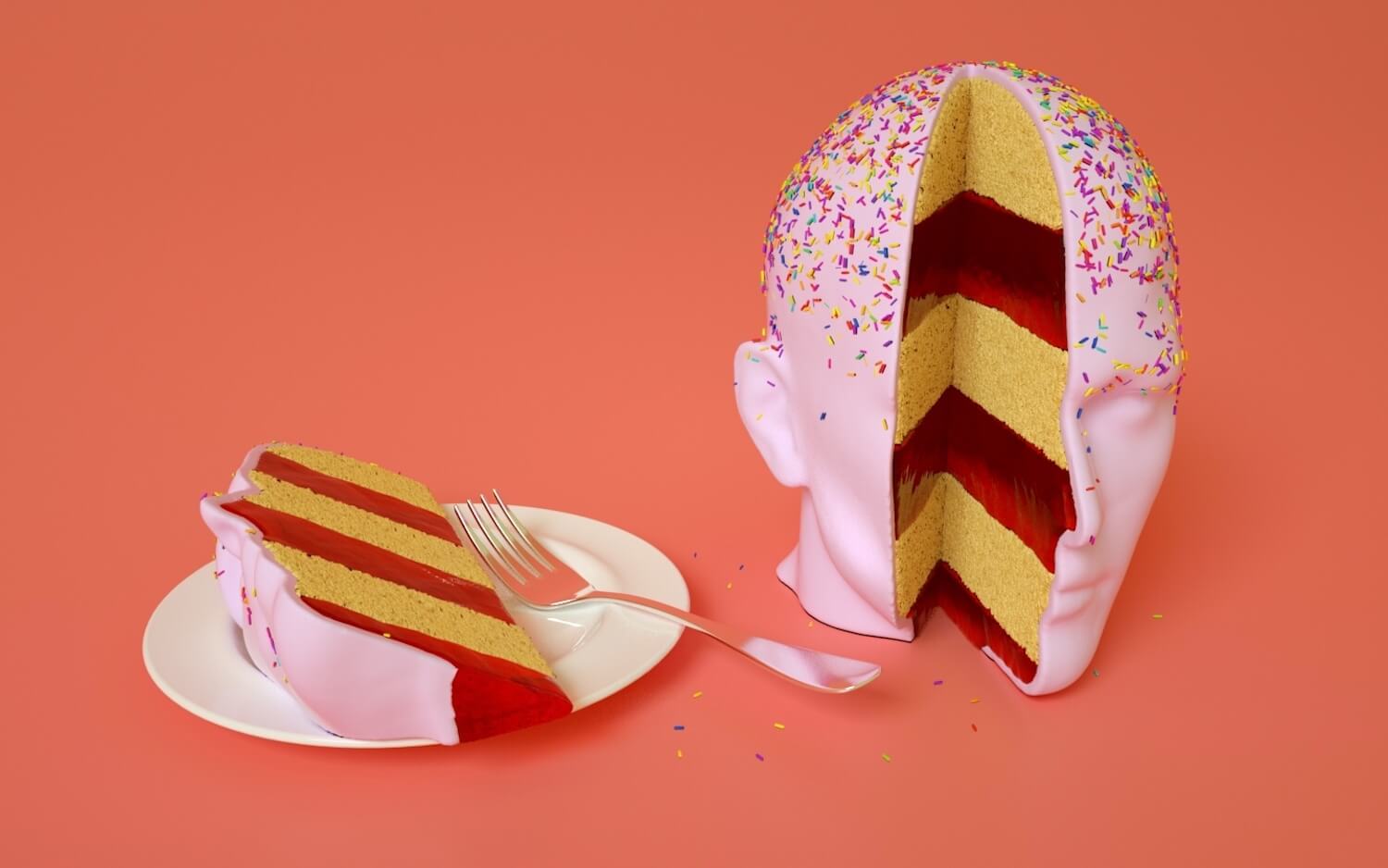 Many of Ion Oprea’s pieces are built using Cinema4D.

“Have some cake,” Ion Oprea says, captioning this piece. Here, the London-based 3D motion designer serves us an appetizing portrait—literally—of cake. Incredibly realistic while also surreal, we’re simultaneously hungry and a put off by the thought of eating someone’s head. It conjures a story, which is in keeping with Oprea’s artistic mission. “I like good design that moves and gives you a cinematic experience at the same time,” he says. “I enjoy the artistic part as well the technical part of the process.” 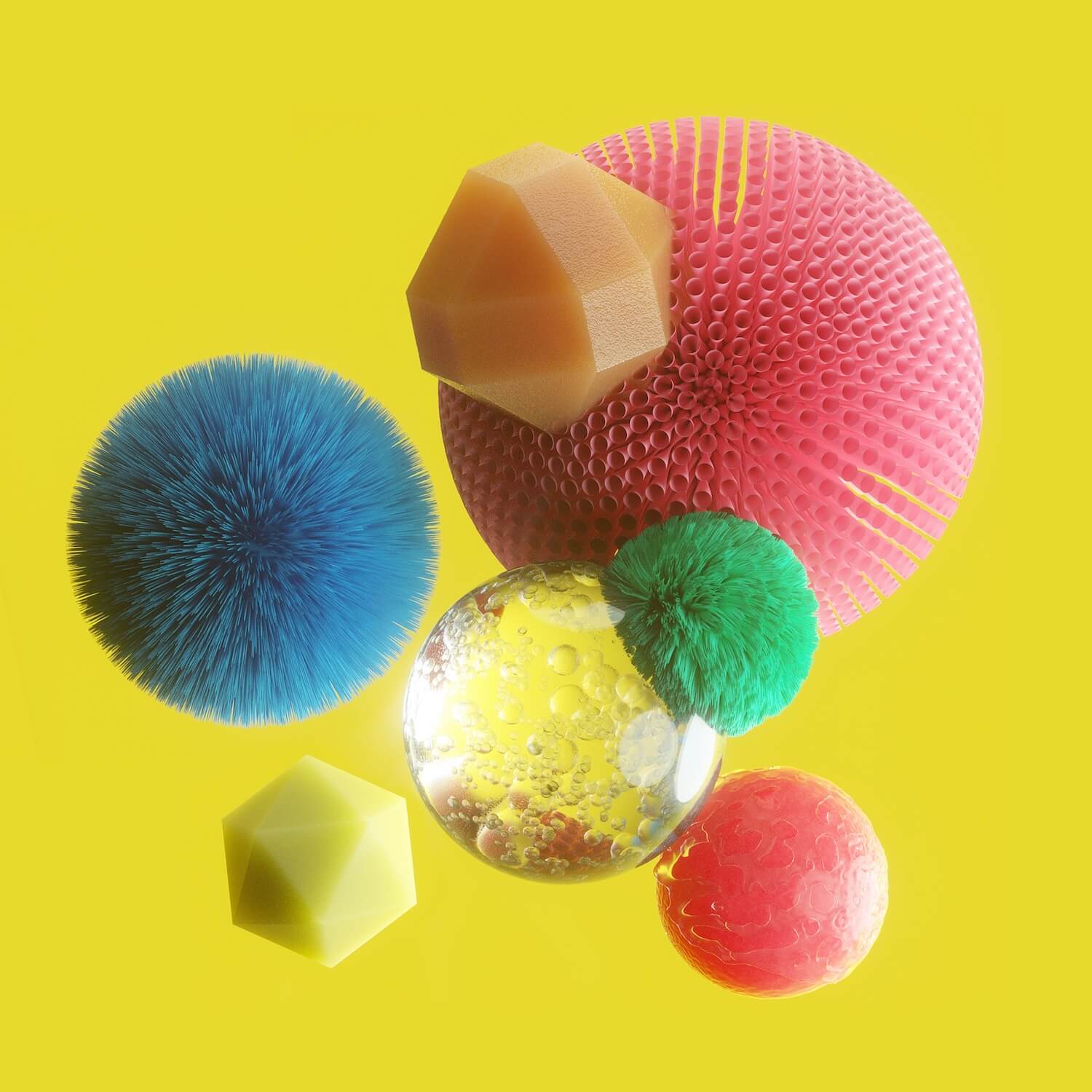 Using CGI and Octone Render, David McLeod focuses his work on three-dimensional texture. The New York-based illustrator and artist has “a process driven and exploratory approach” to his work. This includes typography, which has been recognized by the Type Directors Club—in 2015, awarding McLeod with a Certificate of Typographic Excellence for his “Amfursands” series. 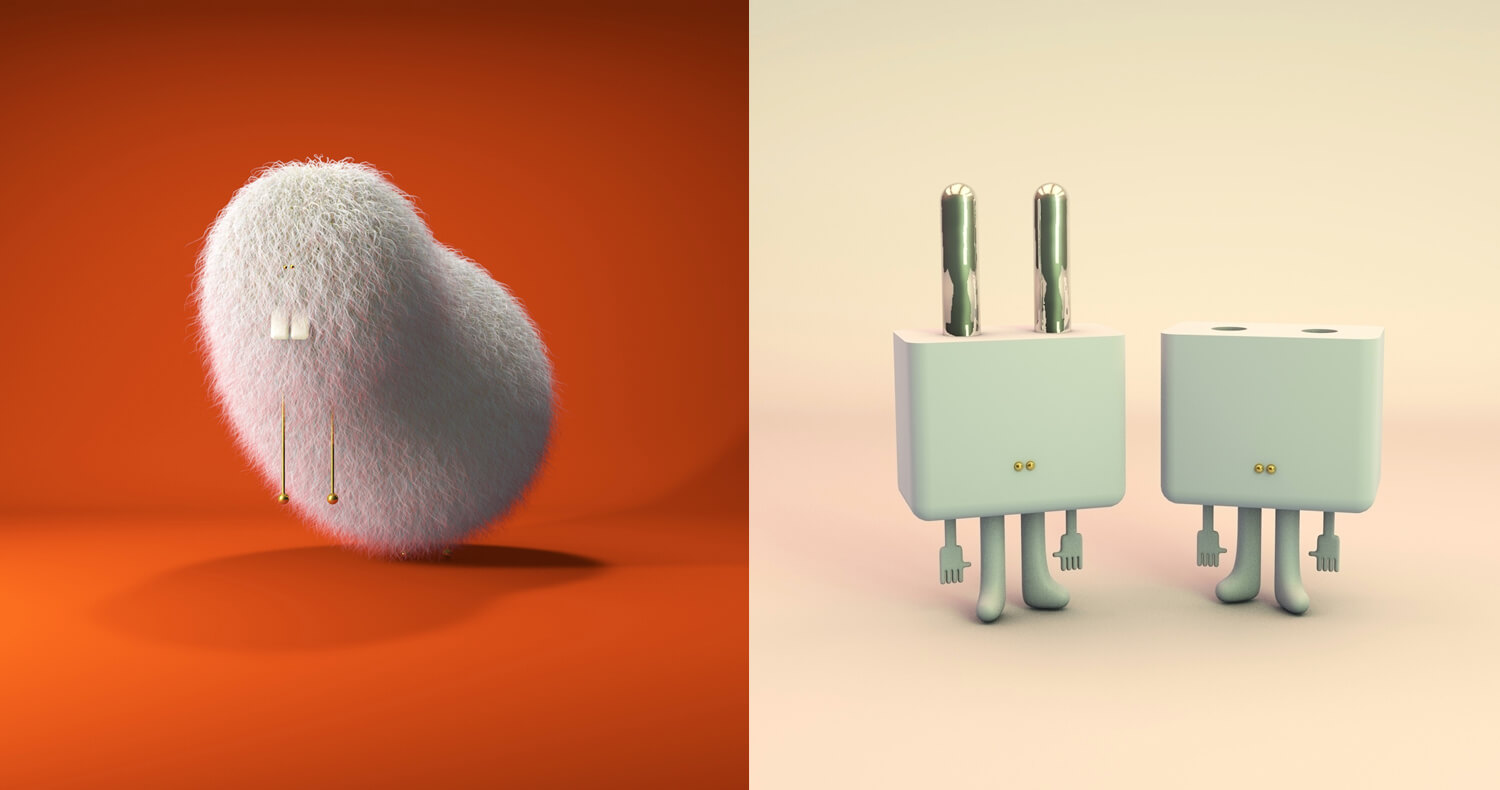 Joaquim Pimenta’s character “Nutty” is on the left. “Plugy” and “Linky” are on the right.

Art director and experimental illustrator Joaquim Pimenta (aka Obla) works for a Porto, Portugal-based TV firm called Canal Superior. In addition to that part of his career, his personal work revolves around character design. Using Cinema 4D, he creates strange figures that each have their own personality. You’ve got Nutty (left), who’s looking for his nuts. Then there’s Plugy and Linky who feed off each other. “Let’s shock them,” Pimenta imagines. “Sure. Plug in!” 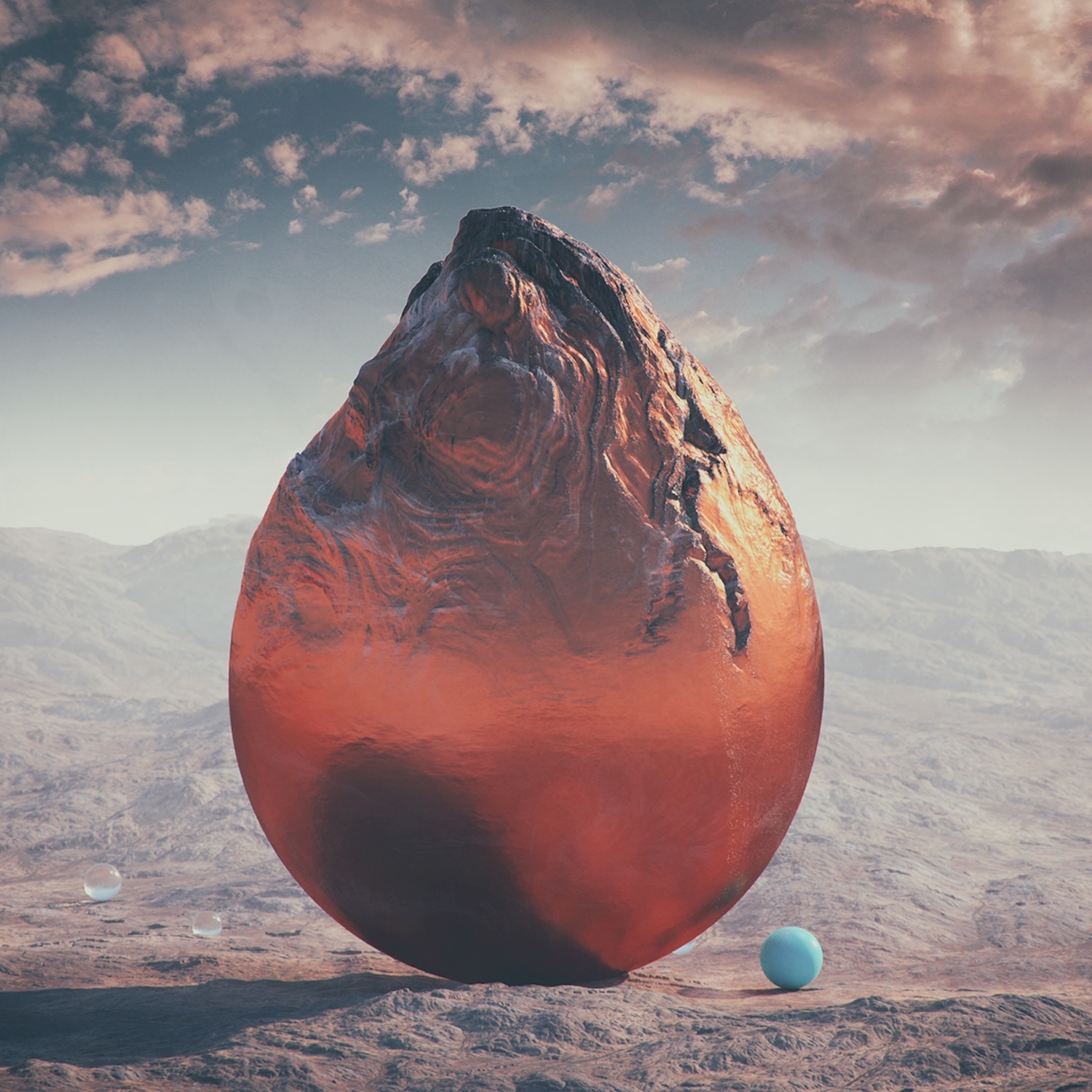 Filip Hodas combines a myriad of programs to create landscapes that are out of this world. This particular piece is part of his “Daily Renders” project, that’s about experimentation. “I decided to make this shorter series special by focusing purely on landscapes, he writes, “and exploring how far can I push my WorldMachine-C4D-Octane workflow.” 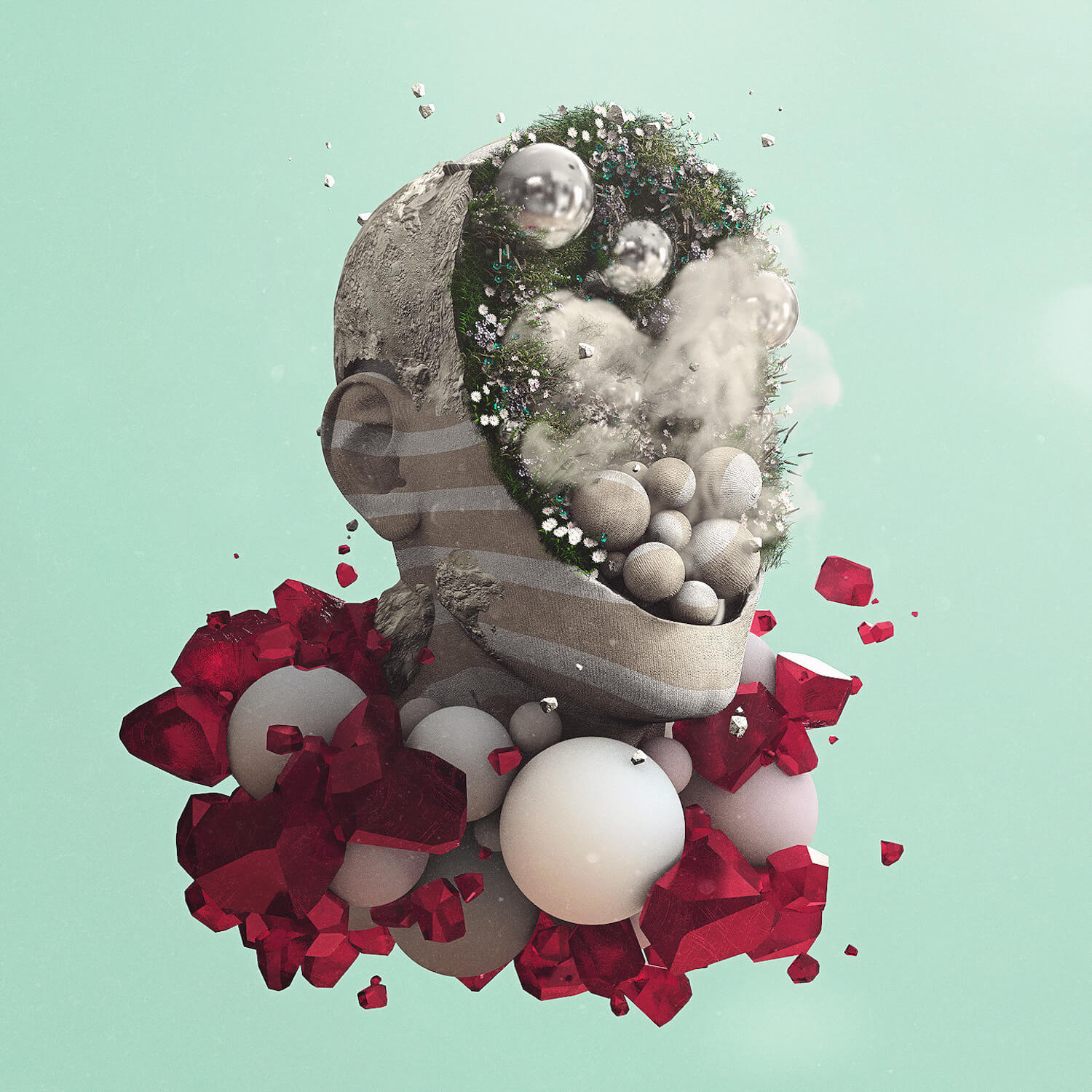 Philip Lueck is a prolific digital artist. For every day of 2016, he created a new work which ran a gamut of subjects, but often having the same theme—decay. Impressive as a group, Lueck has decided to slow things down for 2017. Now, every Thursday, he posts short animations and is planning on creating tutorials of his process. 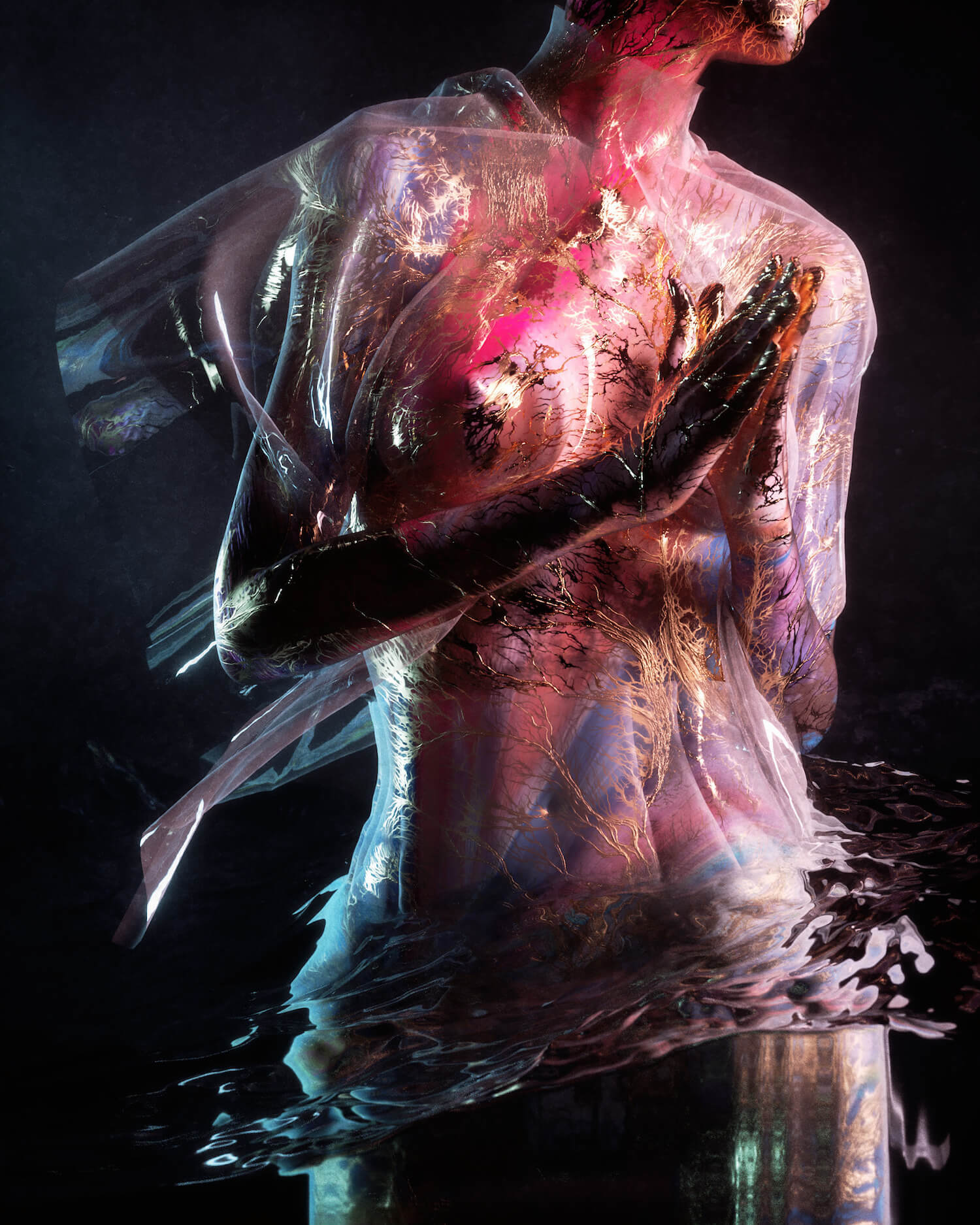 Istanbul-based director and digital artist Mete Yafet works in a variety of mediums. Proficient at not only 3D art but graphic design, motion graphics, and sound design, his skills are used in the technology, fashion, music, and performing arts. This influence is evident in this piece called “Archangel,” which reads like a futuristic fashion editorial. 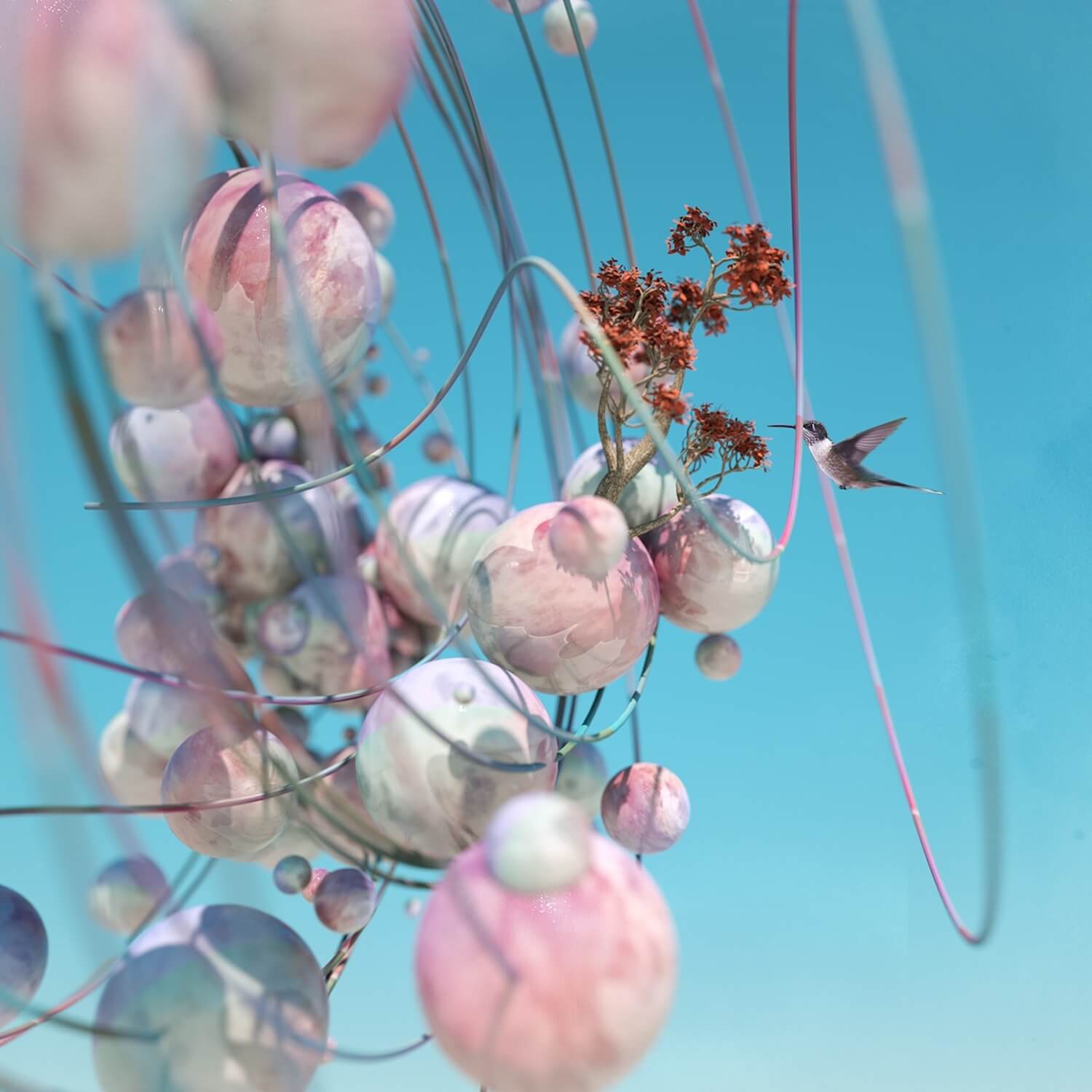 Among a bevy of surreal orbs flies a tiny hummingbird.

Titled “Lania,” Archan Nair completed this piece as day 12 of his 365 days of art. Of his surreal subject matter, the self-taught creative writes that his “visual expressions are part of a journey which is really influenced by the mysteries of our existence and how every action, emotion, and our interconnectedness in a universal scale sets of a chain of reactions,” continuing, “which we experience from the micro to the macro scale.” 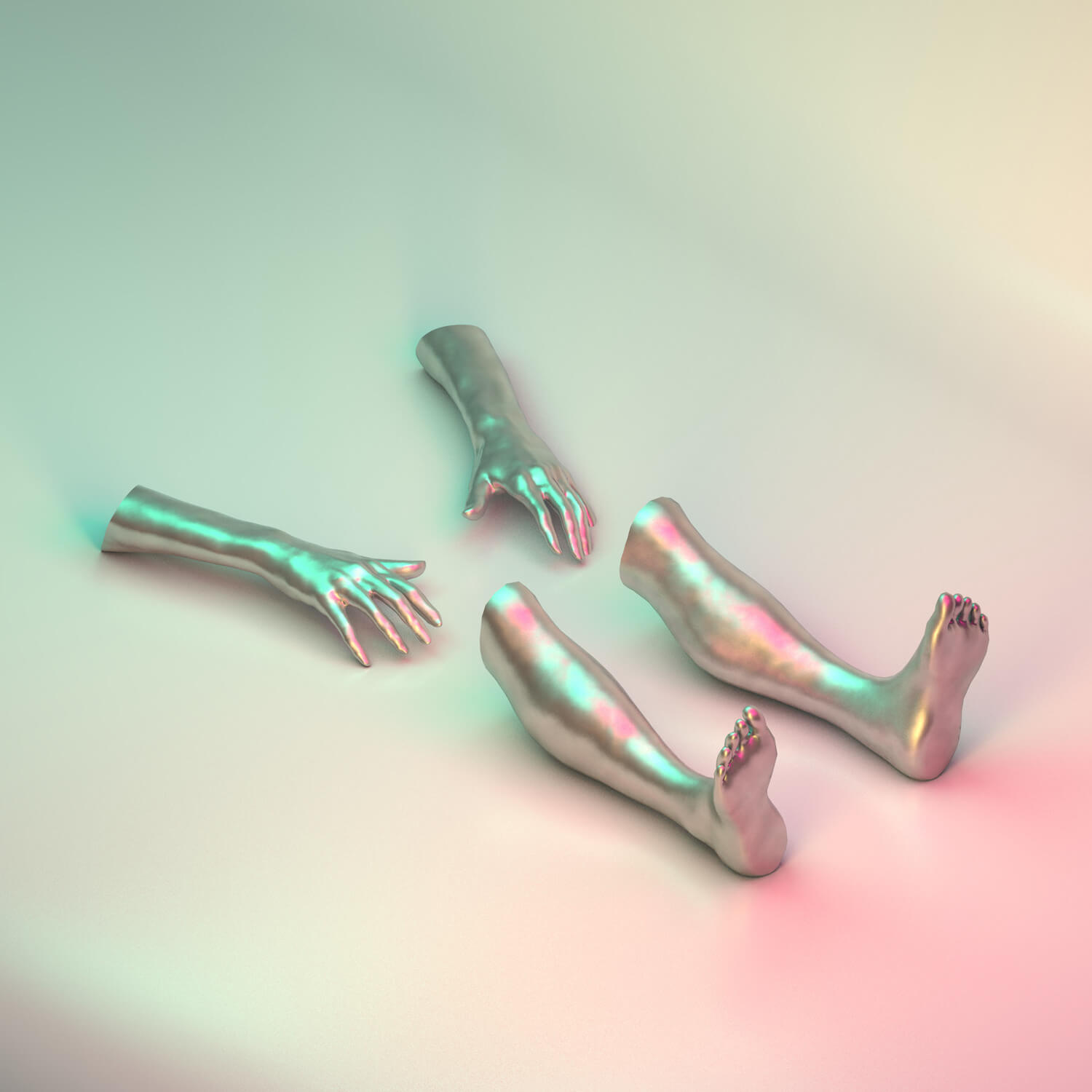 Matt Nelson’s work has been featured in The New York Times, USA Today and Digital Arts.

San Francisco-based motion graphics designer Matt Nelson calls himself “an easily excitable lad.” This type of enthusiasm spills over into his work, and clients have praised him for his expertise and creativity—particularly how he pushes the “boundaries of what’s visually possible.” Nelson doesn’t just keep his knowledge all to himself. In 2015, he released a Photoshop tutorial; with his guidance, it takes just a few hours to create science-fiction imagery using the program and the Trapcode Form plug-in. 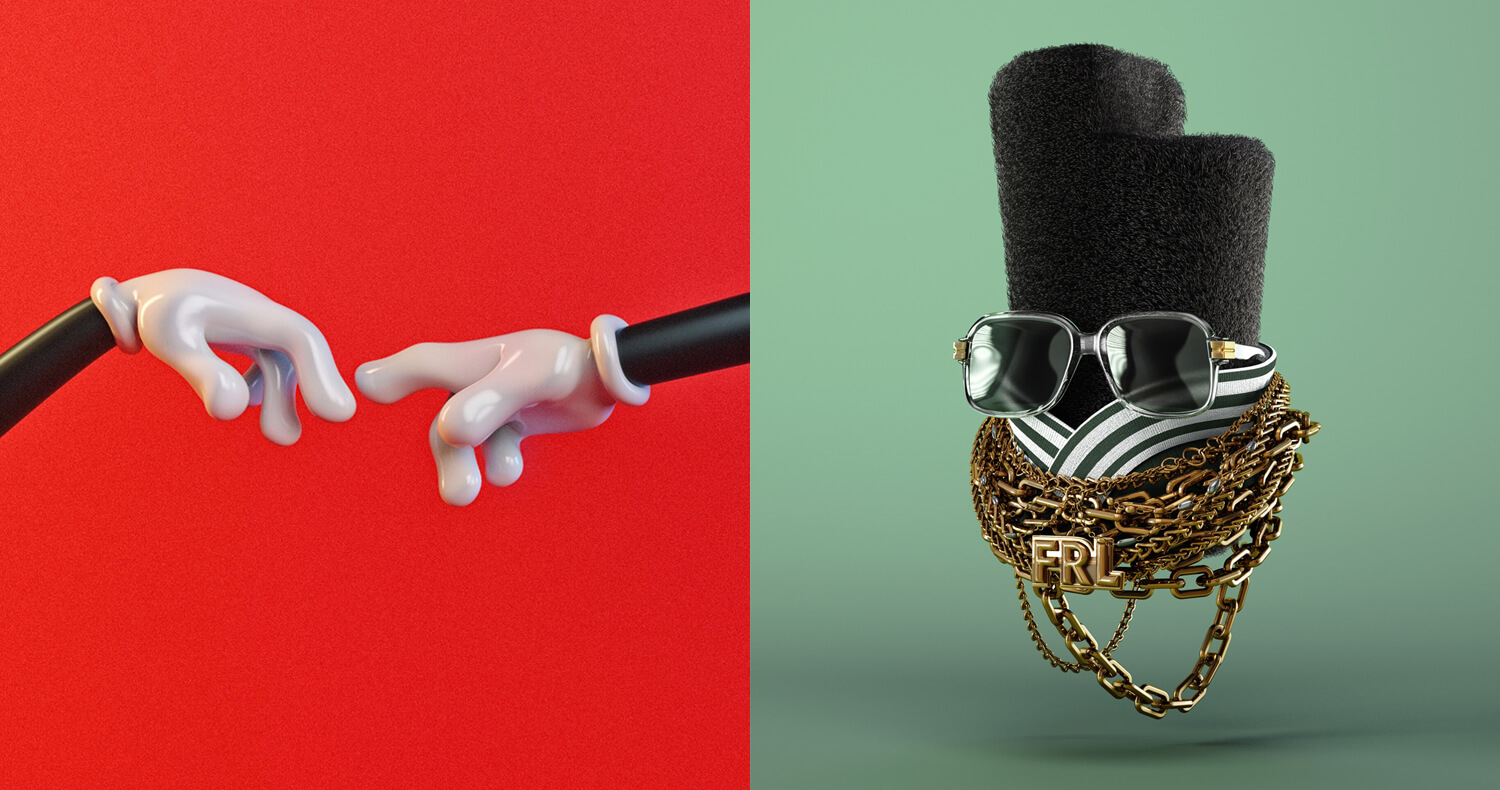 FOREAL is a “young illustration and art direction studio” founded by Benjamin Simon and Dirk Schuster. Their passion is in “little details, intense colors, and extraordinary compositions” for clients both large and small. Much of their work centers around mashups and nostalgia—such as the Micky Mouse gloves (left) mimicking Michelangelo’s iconic “The Creation of Adam.” Another piece references Microsoft’s famous Clippy while one particularly contemporary mashup fuses Kim Kardashian, Donald Drumpf, and virtual reality. 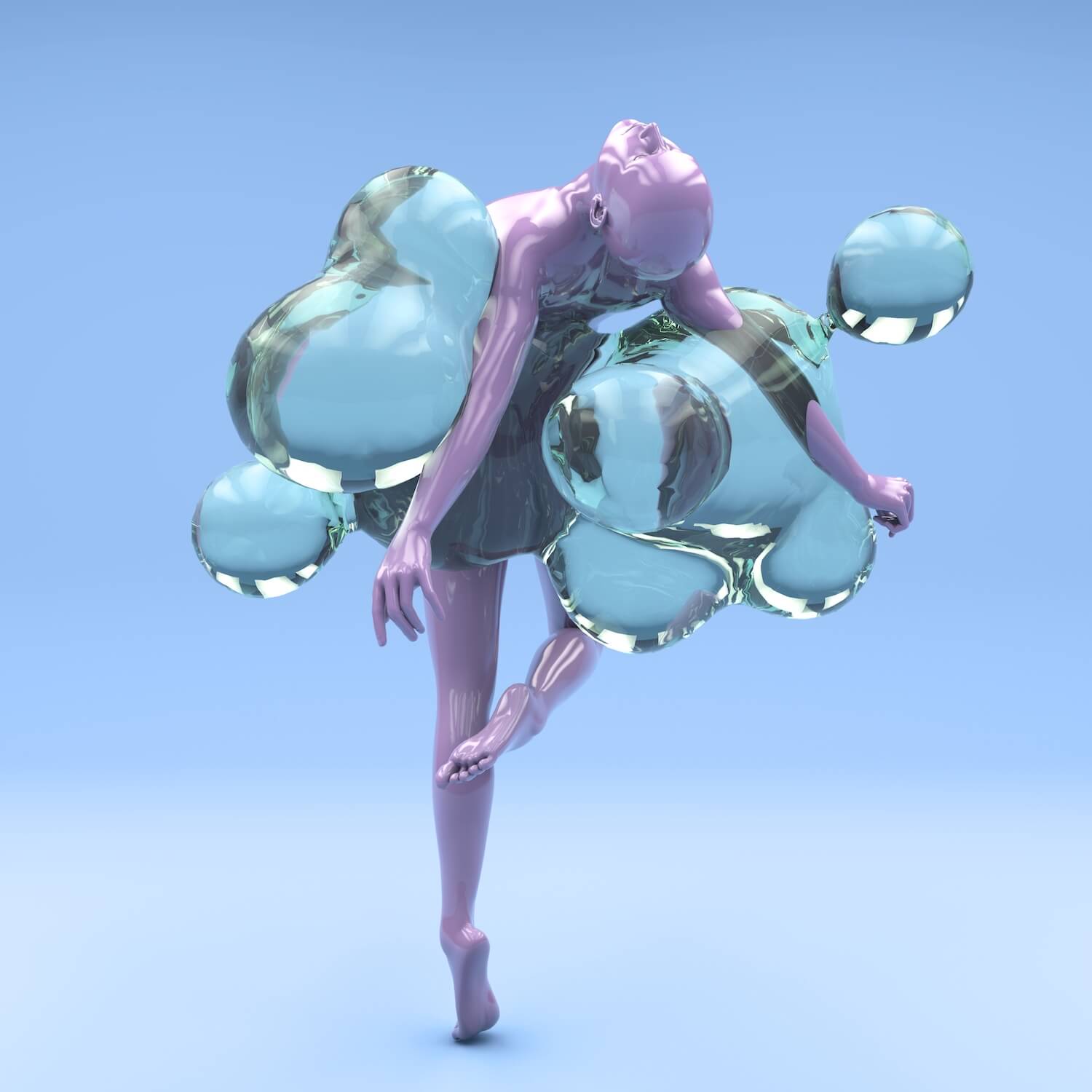 Diogo de Tita is based in Lisbon, Portugal, and has filled his limited portfolio with alluring images of a shiny figures. Combining viscous textures with cyborg-like features, these androgynous characters seem to be floating in some pastel-colored ether—sometimes alone, as well as with others. They’re in both still and animated images—as well as products. Through Society6, de Tita sells his work on phone cases, as art prints, and on tote bags.