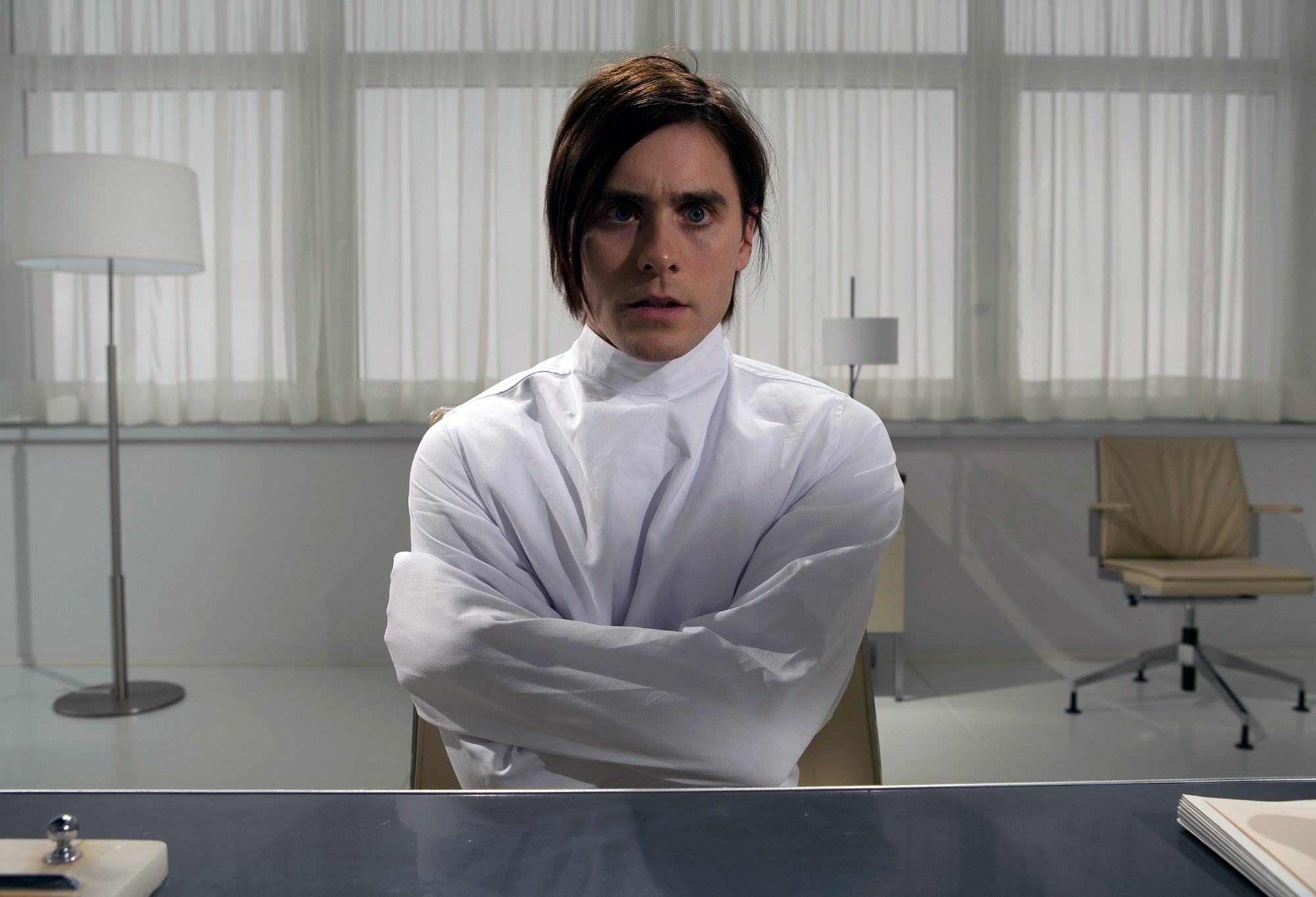 Perhaps youâ€™re not the type of movie-watcher who likes to sit in front of the TV with snacks and a loved one, ready to laugh and feel good about life.

Perhaps youâ€™re the type who wants to be filled with existential dread, hugging yourself as you weep softly over how terrifying it is to be aware of your own loneliness and mortality in a vast, unconscious world. How can we act, how can we choose? How can we even get off this couch, while we’re all just waiting for death? If this sounds like you, my angsty friend, then this is your list.

But really, these messed-up and surprisingly beautiful movies are good for everyone. Movies with existential themes remind you that you are your own agent; you can give meaning to an otherwise meaningless universe, and if you let go of truth par excellence, then you can find freedom. Remember: we suffer because we want to be happy. Your existential crisis is a form of healing. Sure, Nietzsche told us “God is dead,” but he also encouraged us to hold on to that passionate “will for Nothingness.”1 So, watch the movies below, embrace the nothingness, feel horrified, feel moved, and then get off that couch/bed/floor and show that cold, unfeeling world what you’re made of.

Nemo Nobody is experiencing a collision of multiple possible realities, not psychosis. 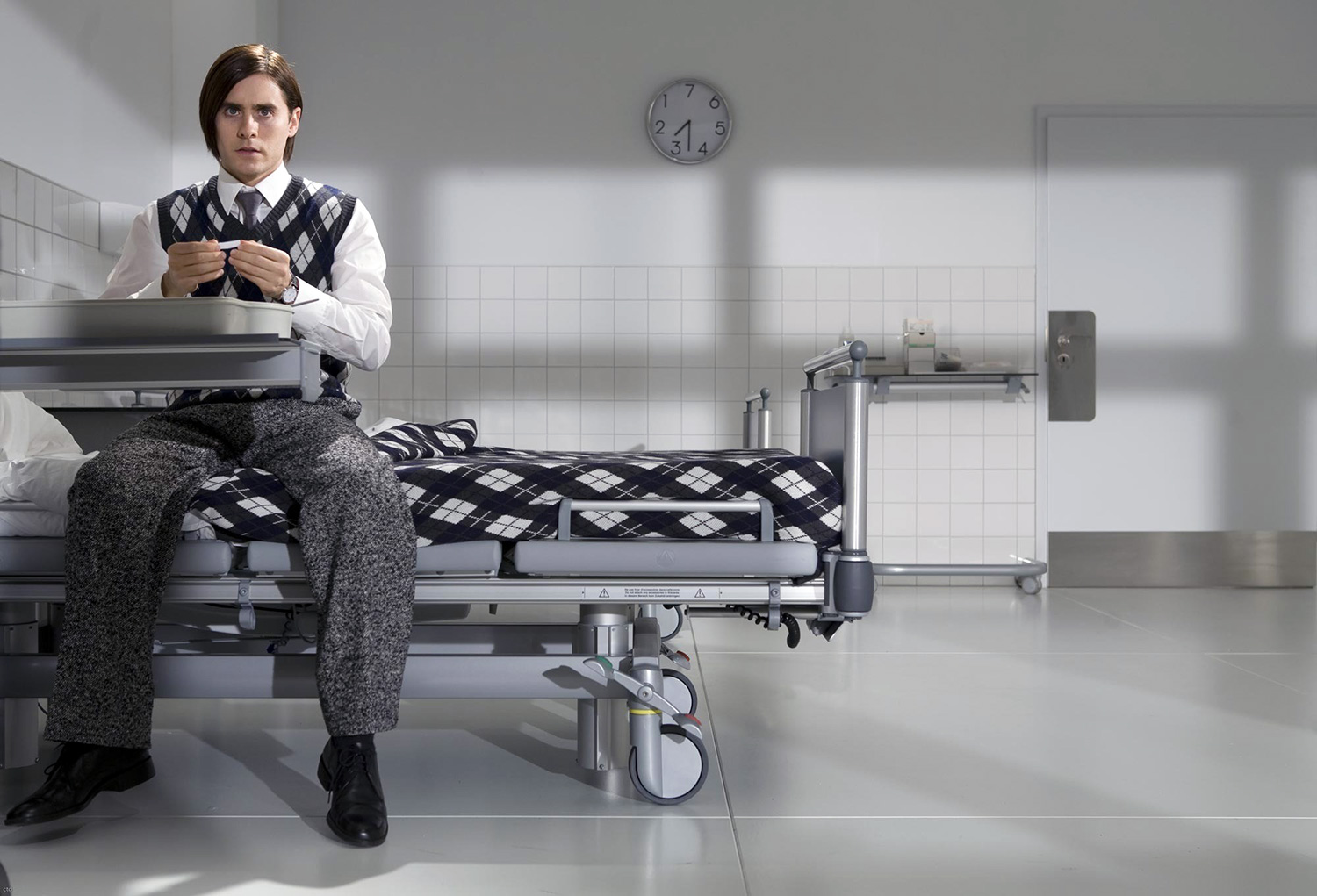 Like Nemo himself, you’ll be asking, “Is this even real?”

Jaco Van Dormael’s 2009 sci-fi drama film was too weird for a wide theatrical release, but it will blow your mind, break your heart, and maybe even make you less afraid to die. At 118 years of age, Nemo Nobody (Jared Leto) is the last mortal human on earth. Everyone else in the utopian future treats him like a spectacle, wanting to know everything about his lifeâ€”who his parents were, who he fell in love with, and if he were every truly happy. What Nemo shares, however, are three different stories, each with their own love interests and disasters, all starting with a critical choice Nemo had to make on a train platform as a child. Grappling for “the truth,” the viewer is guided into an acceptance that nothing is for certain, there is no singular experience, and that all choices are the right onesâ€”so you might as well embrace the chaos. 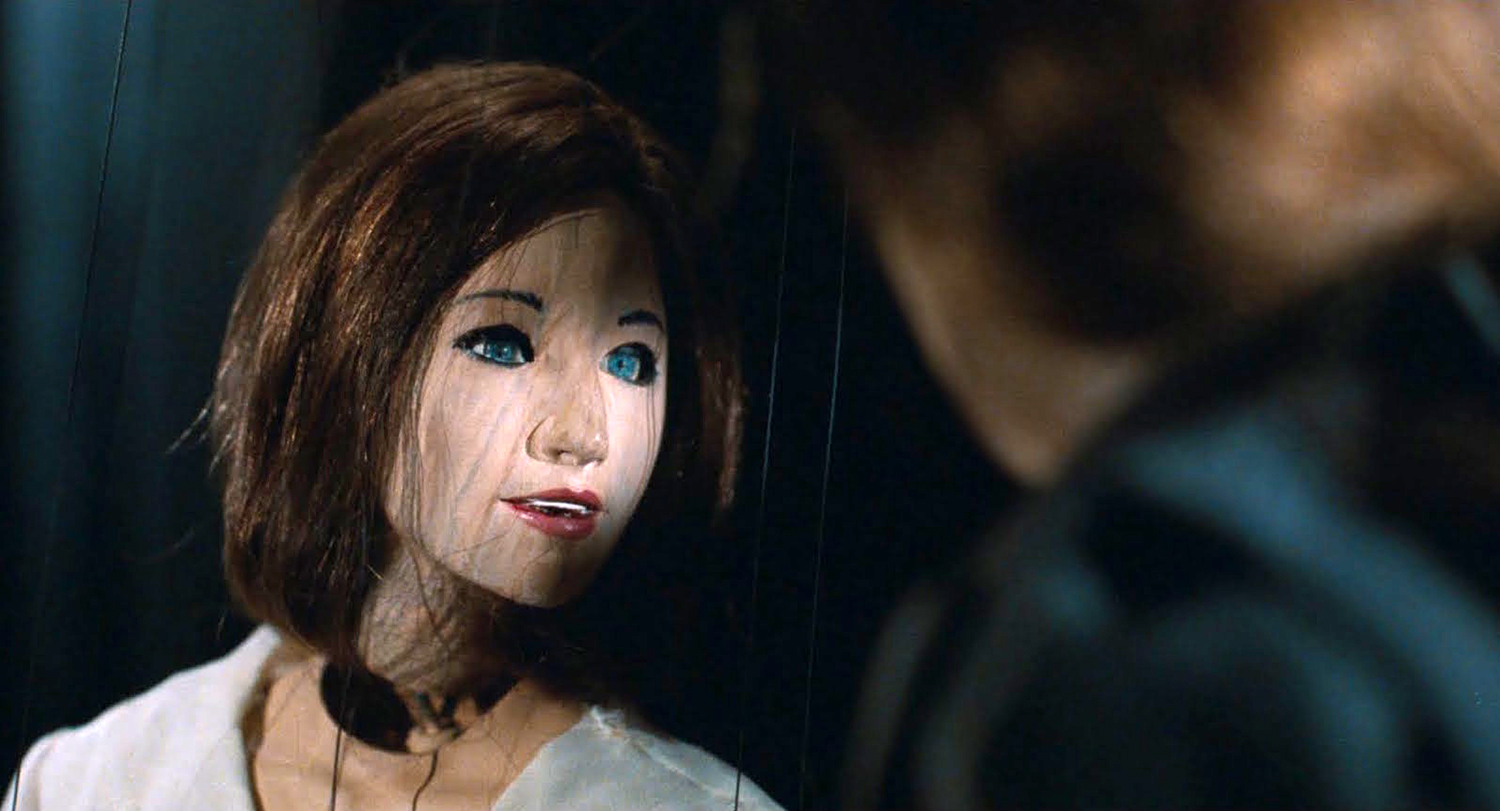 We all wish we could pull the puppet strings of our lives.

At the beginning of Spike Jonze’s 1999 film, Craig Schwartz (John Cusack) tells a chimpanzee that “Consciousness is a terrible curse.” As a talented but unemployed puppeteer, Craig is deeply dissatisfied with his life, including his marriage. When he takes an office job and meets an attractive female co-worker named Maxine Lund (Catherine Keener), she rejects him outrightâ€”that is, until Craig discovers a portal in the office that allows him to inhabit the more-desirable body of actor John Malkovich. His experience of seeing the world through Malkovich’s eyes raises philosophical questions about the nature of the self; for example, when Craig’s wife Lotte (Cameron Diaz) tries it out, she afterwards exclaims, “I knew who I was.” Lotte and Craig experience a greater degree of sexual and emotional satisfaction inside Malkovich’s body, risking their freedom in order to escape the prisons of their own lives. 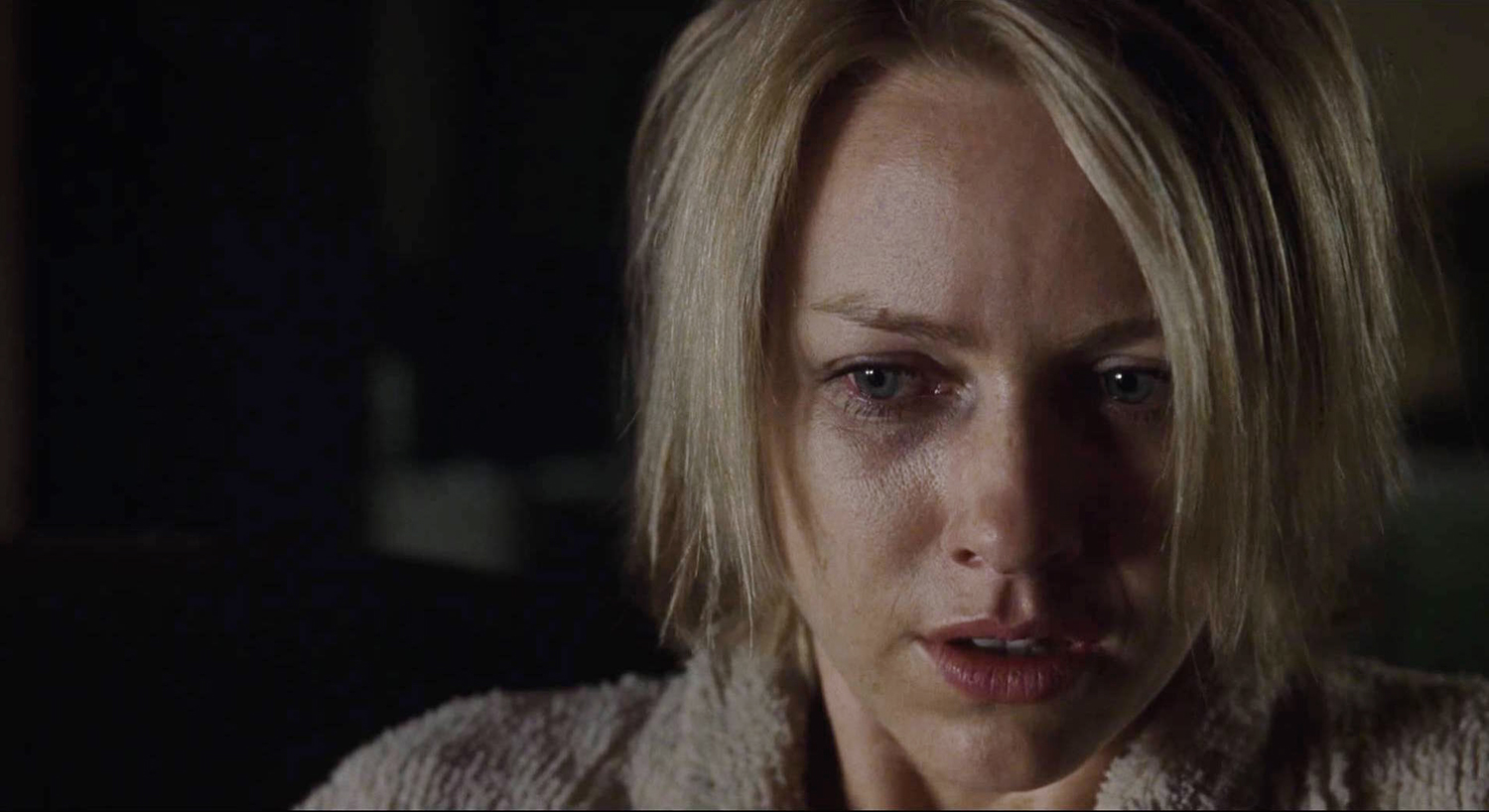 Who are you? Have you looked in the mirror recently?

David Lynch’s films are like the Theater of the Absurd: experimental and bizarre, placing ordinary people in incomprehensible situations. The horror-thriller mystery-drama (impossible to categorize) “Mulholland Drive” is no different, working to unhinge any solid sense of reality. After a young woman (Laura Harring) wakes up from a car crash with amnesia, she meets Betty Elms (Naomi Watts), an aspiring Hollywood actress. Betty tries to help the woman recover her memory, but the clues only lead them down a path of confusion and chaos. The existential angst in this brilliant film surrounds individuality and the search for the self. What Lynch tests us with is the idea that there is no singular self, but instead a series of identities and realities layered upon each other. What happens when we fail to find a cohesive sense of identity? Madness, of course. 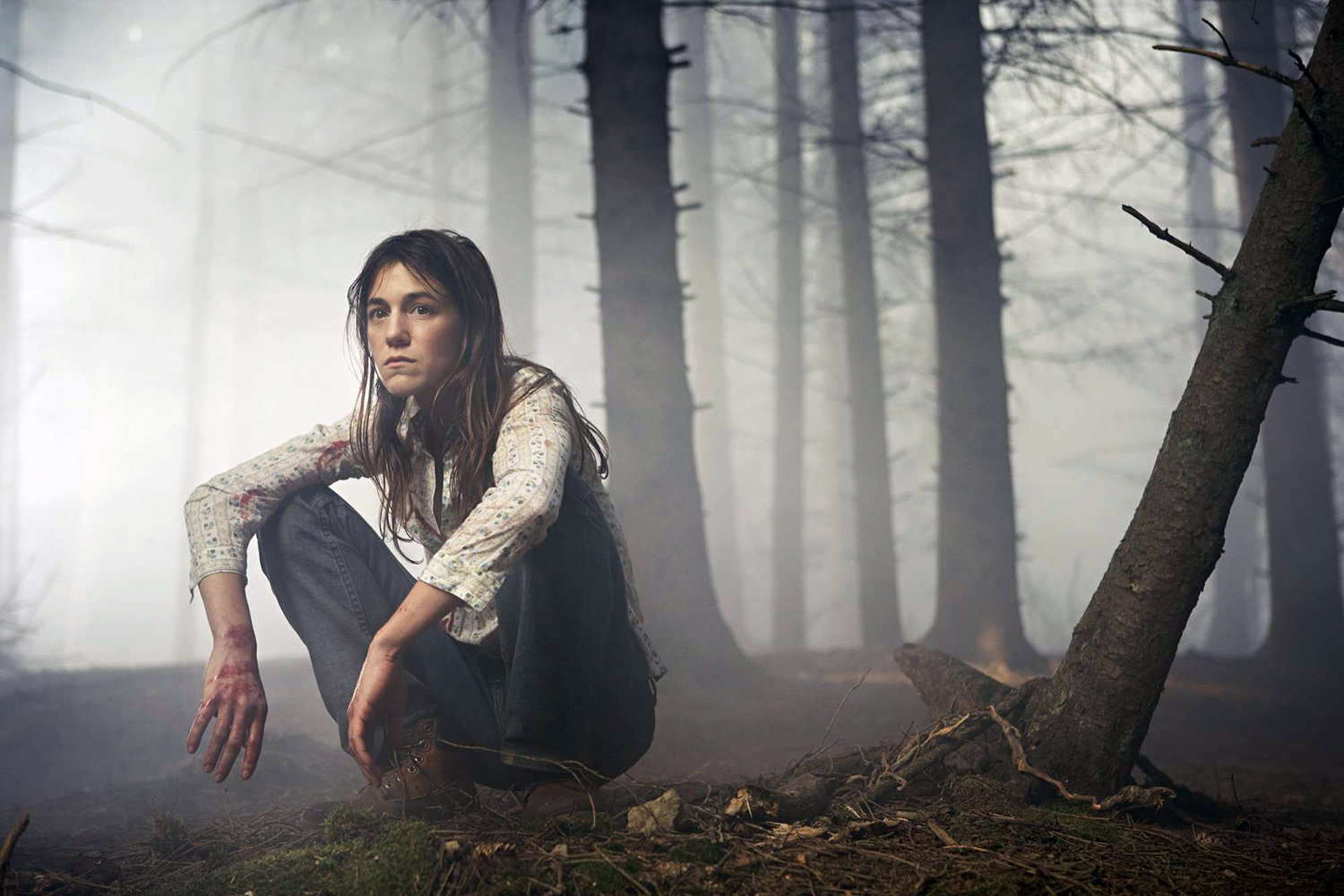 Embrace the chaos, or let it devour you.

Lars von Trier’s “Antichrist” was filled with so much existential nausea (and just plain disgusting imagery) that I had to watch it in short segments. This film exists like the twisted offspring of a genre-orgy, spanning from art film to slasher to pornography. Charlotte Gainsbourg and Willem Dafoe act beside each other anonymously as the woman and the man. After the death of their child, the man tries to use his experience as a therapist to bring his partner out of a catatonic depression. As part of the therapy, the man takes the woman to a cabin in the woods where she once wrote a thesis on genocide (are the alarm bells ringing?). The man starts to experience visions of mutilated animals in the forest, including a fox that snarls (while chewing on its own innards), “Chaos reigns!” As you can assume, this isn’t one of those existential crisis films that leaves you feeling cleansed; in fact, it verges on pure sickening nihilism. God is definitely dead out there in the forest, a place where morality does not exist; the world is chaos, and we can create as easily as we can destroy. 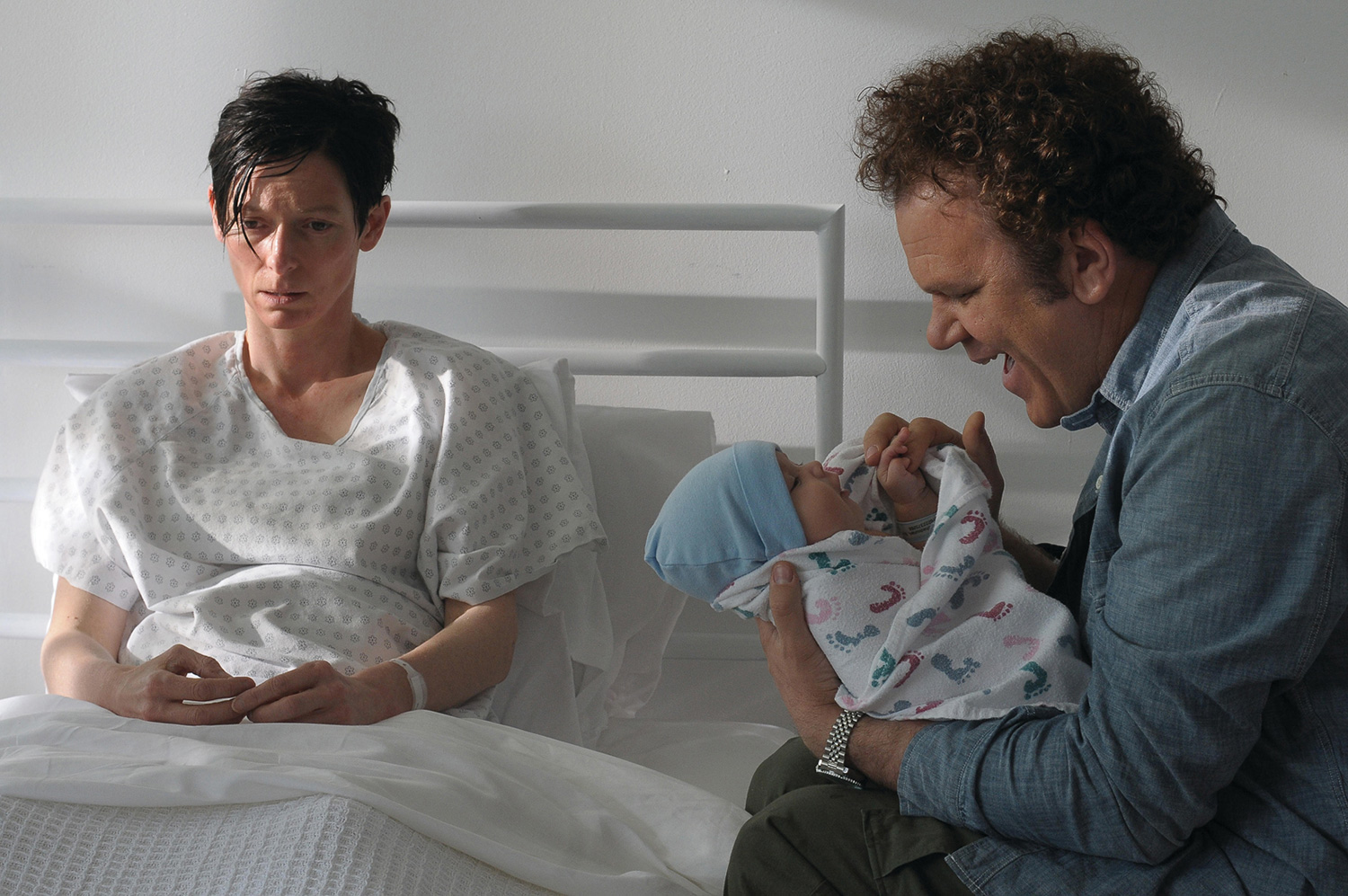 The joys and terrors of reproduction.

We Need to Talk About Kevin

Lynne Ramsay’s 2011 film (based on the book of the same name) is another think-piece on the existential terrors of parenthood. Nietzsche’s “will to power” refers to the vital force that drives humans to achieve goals and carve out identities; basically, it is the power of life that keeps us going. For Eva (Tilda Swinton), however, this ability to self-create does not work out in her favor. Her son, Kevin (Ezra Miller), an apparent sociopath from birth, grows up tormenting EvaÂ and the family, and eventually goes on to to commit a violent act. Kevin has created himself, using his will to achieve the power he desiresâ€”but there is another discomforting possibility. Because Eva’sÂ pregnancy was an accident, sheÂ always harboredÂ a secret resentment towards her son, in that having a child stripped her of the ability to travel freely. Has her will also fed into the creation of a monster? 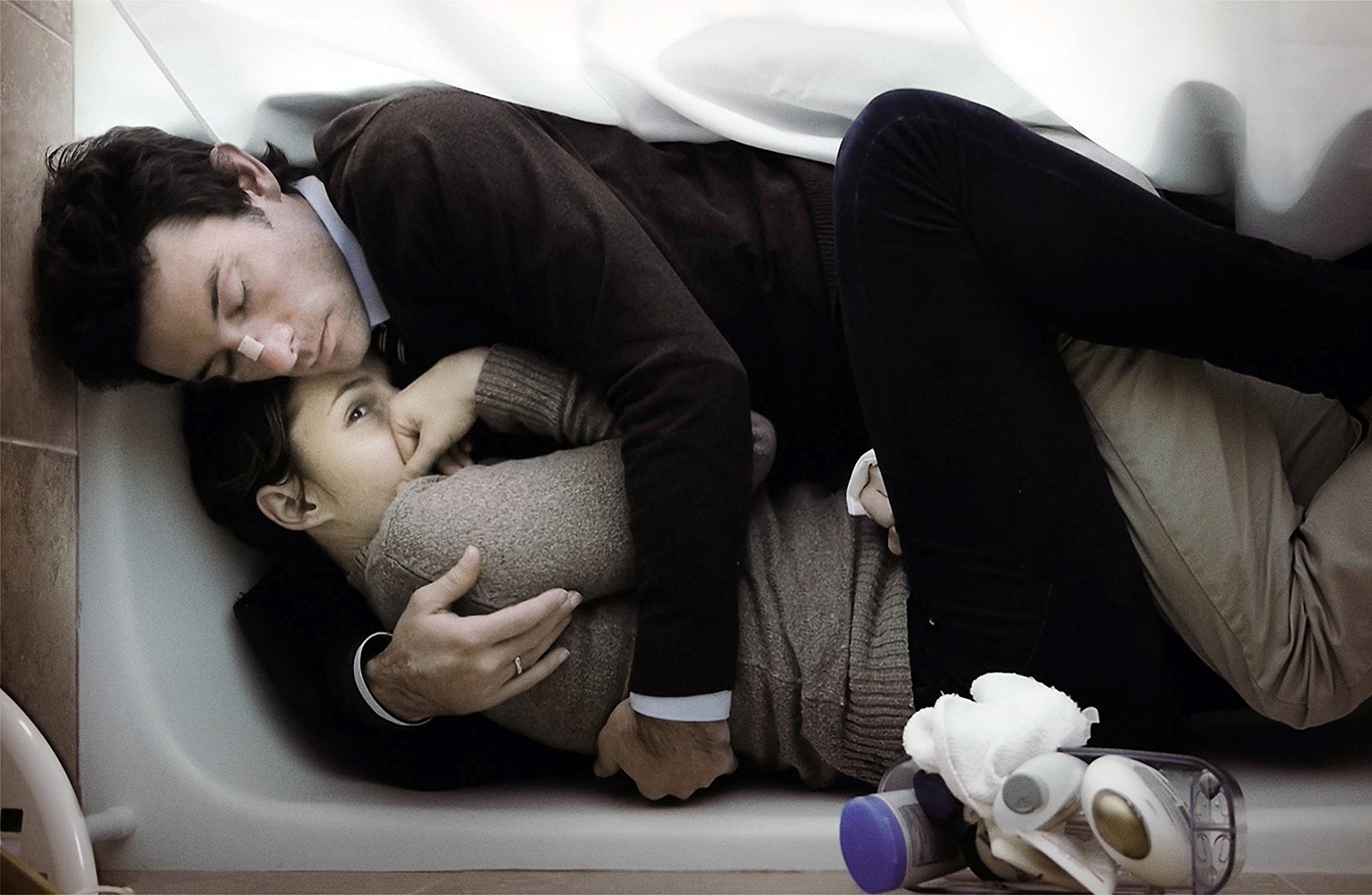 We must protect each other from loneliness.

At the center of Shane Carruth’s “Upstream Color” (2013) is a strange, mind-controlling parasite that changes hosts throughout its lifecycle, moving from pig, to human, to orchid. While this sounds like the synopsis of a surreal body-horror film, “Upstream Color” is surprisingly beautiful as it transforms anxiety into a sense of peace. Kris (Amy Seimetz) is tasered, drugged, and implanted with a parasite by a mysterious man known only as “The Sampler.” After she is returned to her apartment with no memory of the event, she soon develops a deep, almost psychic connection with a man (who becomes her lover) and a pig (the original host). The movie challenges our assumed truths about the nature of identity and love; are these things merely biological phenomena, as the parasite suggests? Are we truly free-thinkers, or are we slaves to our material bodies? While the themes may be alienating, the film also explores a connection among living things that could heal the existential loneliness of being an individual alone in the universe. 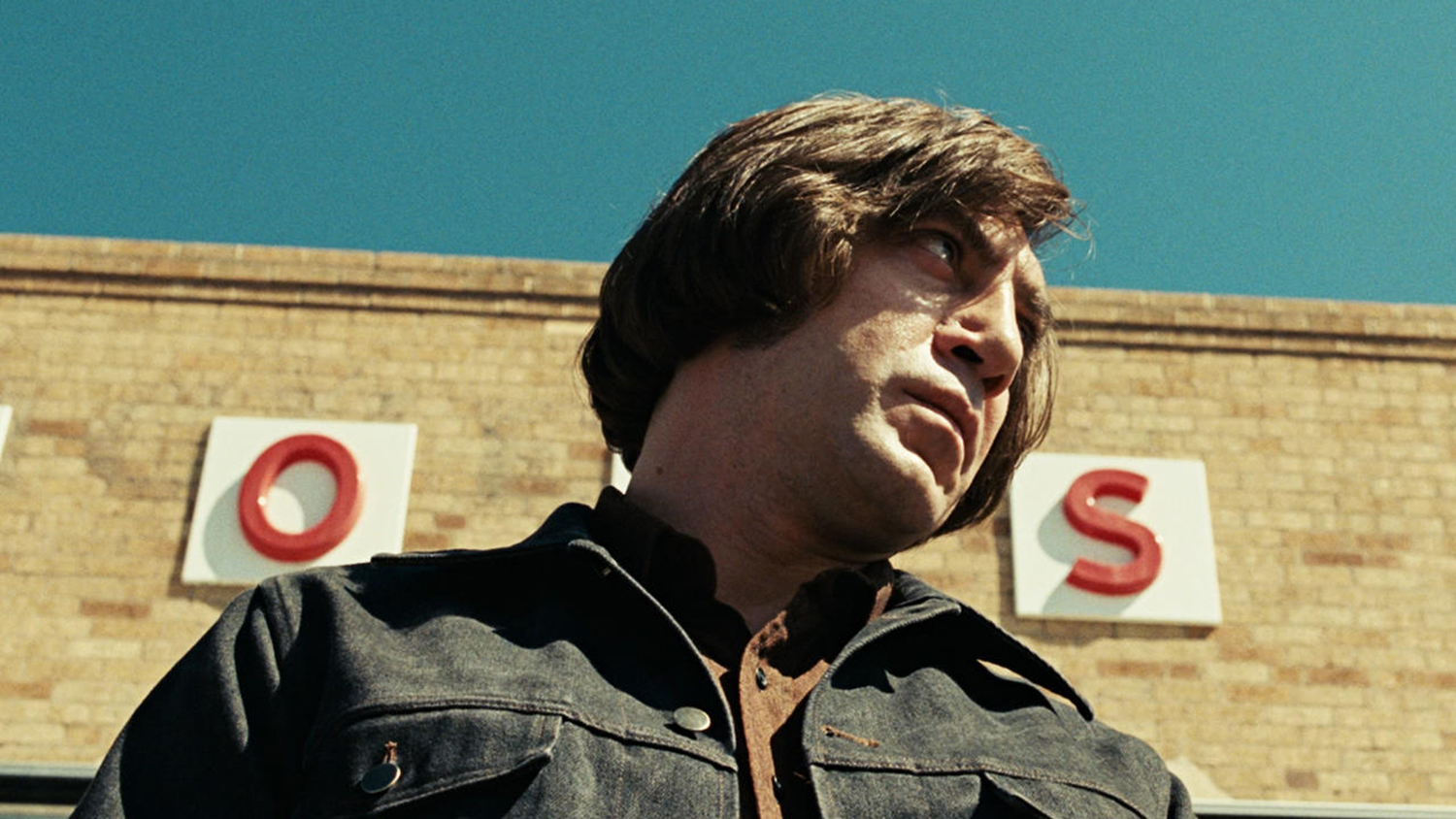 Chigurh is death himself, behind every door and around every corner.

No Country for Old Men

Just because you have the power of free will in a chaotic universe, it doesn’t mean you will use that power for good. Most of us experience guilt, which keeps our actions in line with a moral codeâ€”but this is not so for the monster that is Anton Chigurh (Javier Bardem). Chigurh is a hitman who lacks remorse, killing based on principle and chance, even replying to the statement “You don’t have to do this” with a fatal shot from a captive bolt pistol (the device that’s used to stun animals in the slaughterhouse). Several times throughout the film, he lets a flipped coin decide if his targets live or die. Subsequently, the cat-and-mouse chase he engages in with the ordinary cowboy Llewelyn Moss (Josh Brolin) is exhausting to watch. Based off of Cormac McCarthy’s book of the same name, “No Country for Old Men” is a disturbing film that will dig into your psyche and stay with you long after the credits. 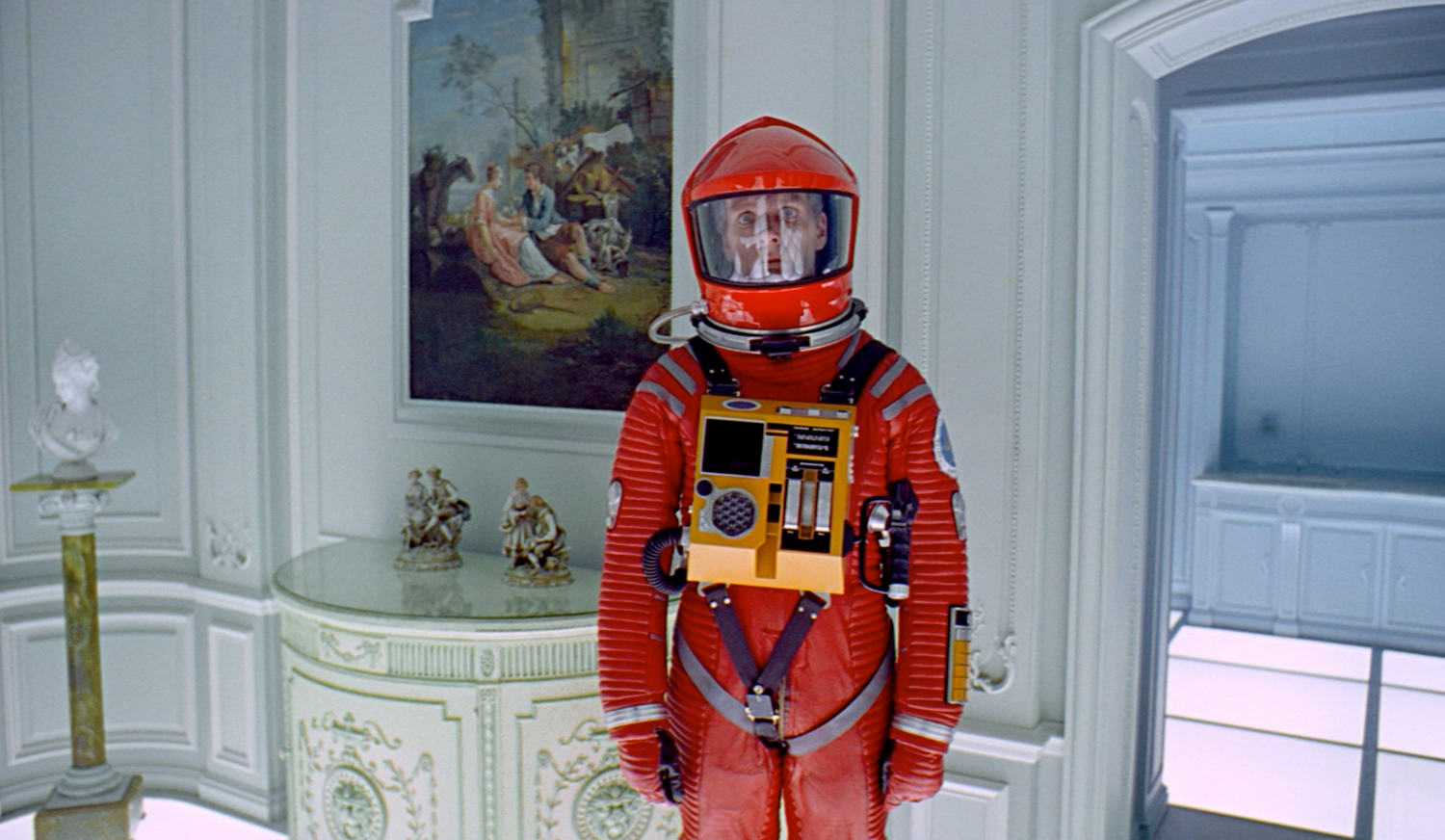 This is not what you’d expect to find in outer space.

Space is the perfect place to have an existential crisisâ€”hell, even just looking up into space can provoke angst. In Stanley Kubrick’s experimental film “2001: A Space Odyssey” (1968), plot and dialogue take a back seat while the viewer is stunned by visual effects representing the unfathomable mystery of space travel. When a strange monolith holding the secret to the next evolutionary stage appears near Jupiter, Dr. David Bowman (Keir Dullea) sets out into the darkness to seek the answer, accompanied by a self-aware computer named “HAL.” The further Bowman goes, the more reality warps around him. Writer/philosopher Pedro Blas Gonzalez has deemed this movie “an existential odyssey,” in that Bowman’s quest represents the endless search for knowledge. Bowman must also undermine and resist the influence of technology (HAL) in order to reaffirm the distinctness and value of the human will. The ending of this movie is breathtaking and absurd, demanding that the viewers make their own meaning out of the unknown. 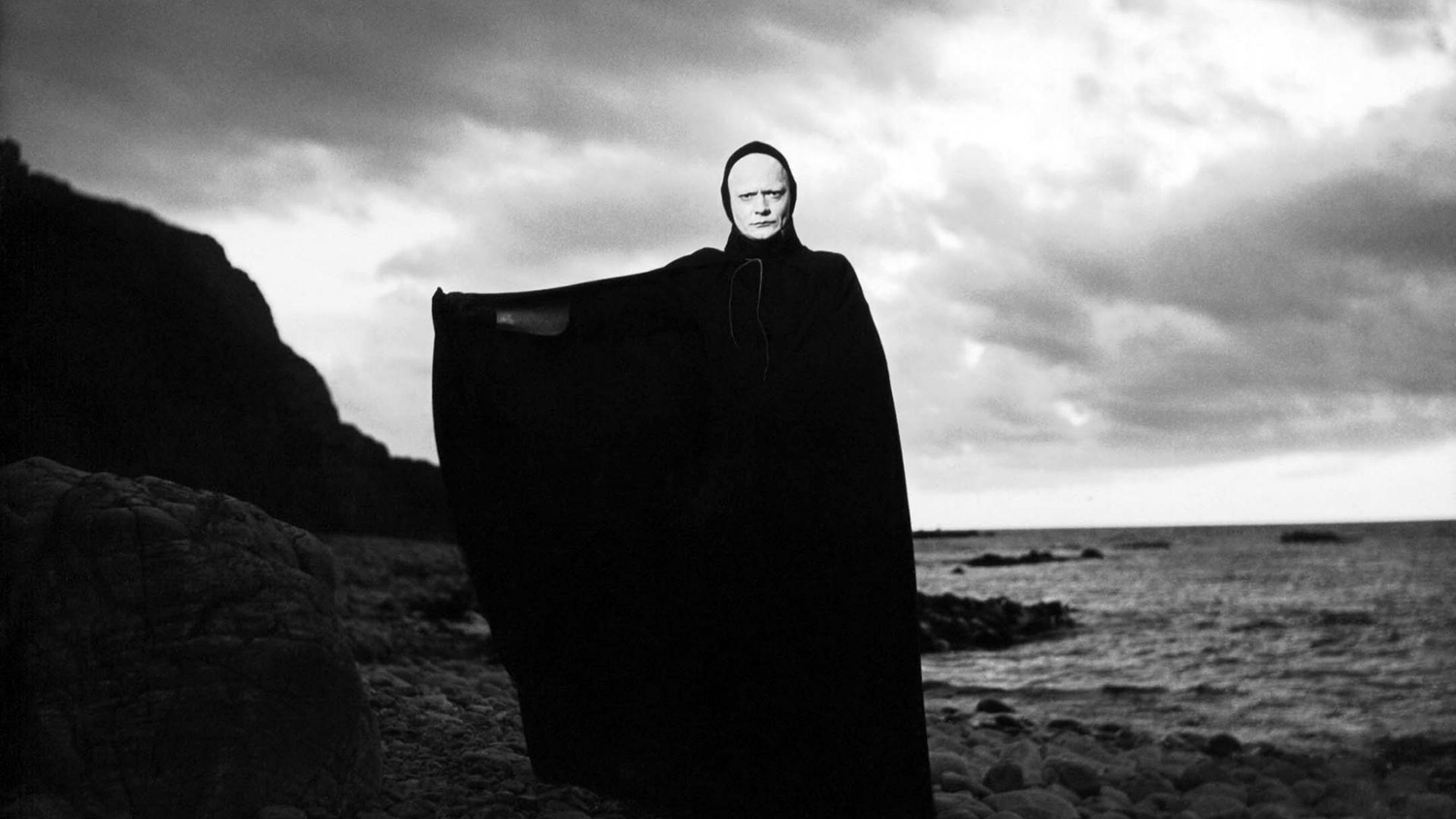 If you want a quality, classic film that’s jam-packed with existential questions, watch “The Seventh Seal” (1957) by Swedish director Ingmar Bergman. After fighting in the Crusades, a battle-weary Antonius Block (Max von Sydow) returns to Sweden, where the black plague has decimated the people. Antonius meets Death (Bengt Ekerot) on the beach and challenges him to a chess match in an attempt to delay his inevitable demise. As the game carries on periodically throughout the film, Antonius bears witness to a ravaged countryside bereft of humanity and rationality, desperately seeking evidence of God in order to recover his faith. â€śWhy does He hide in a cloud of half-promises and unseen miracles?â€ť Antonius asks. He adds that if God does not exist, “then life is a preposterous horror.” 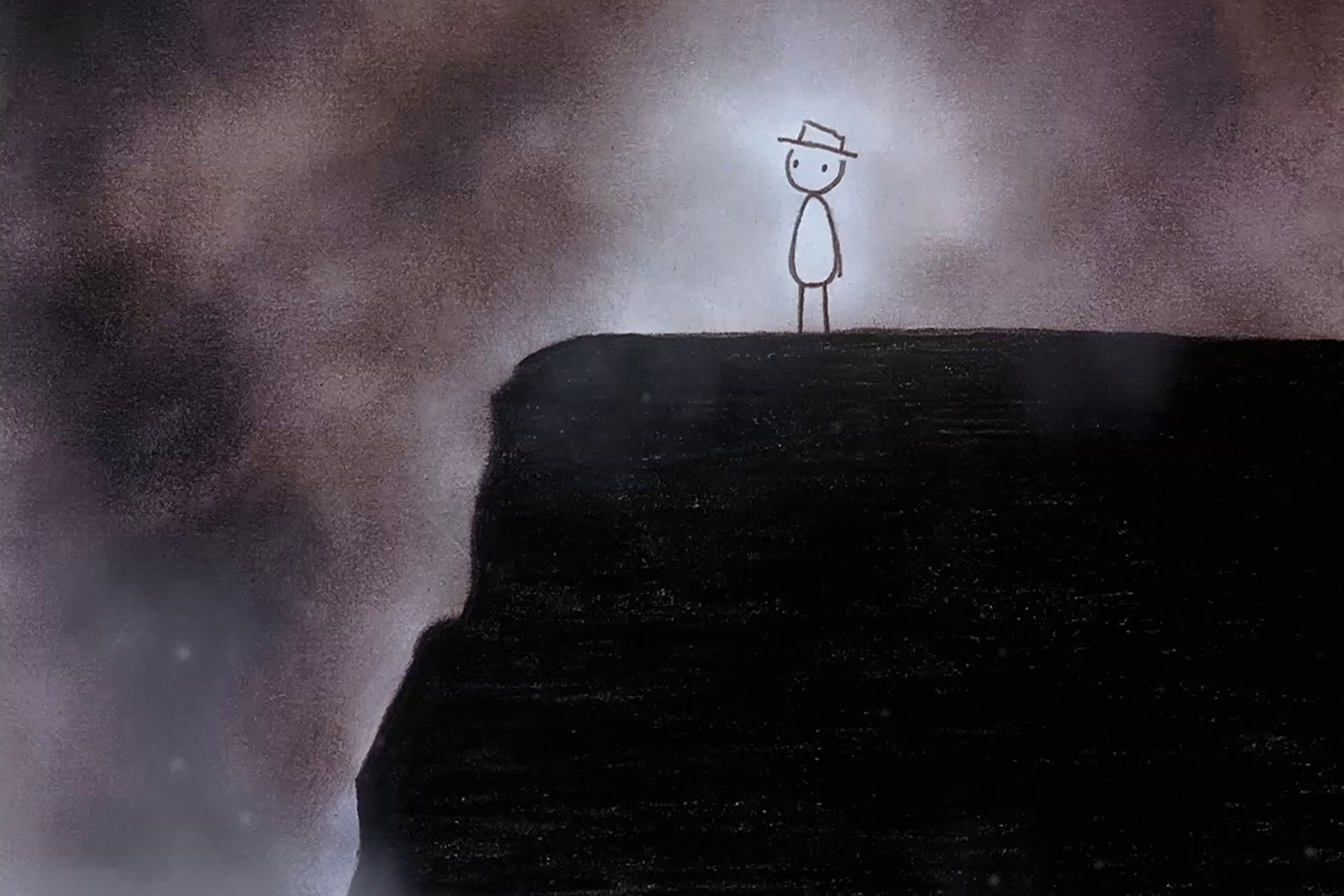 It’s actually a pretty nice day. Why don’t we take a walk?

It’s Such a Beautiful Day

If you need to cry, or if you need to be reminded of the beauty and fragility of life, watch this movie by my favorite profound weirdo, Don Hertzfeldt. You might remember watching Hertzfeldt’s “Rejected” short film in high school, repeating absurd statements such as “My spoon is too big” to your friends. “It’s Such a Beautiful Day” is the animator-director’s first feature-length film, composed of three segments, all written and drawn by him. Don’t let the stick figure animation fool you; this movie is visually astounding. It is about Bill, an unassuming man suffering from memory loss. Just like Mr. Nobody (our other unreliable narrator), Bill’s memories of his past become fragmented and lost in a gray area between fact or fiction. As Bill is irreversibly stripped of his past and future, he becomes intensely aware of the beauty of the mundaneâ€”such as the texture of paper towel. So the next time you experience tremendous joy or unimaginable loss, be like Bill at the edge of losing everything, as he looks at the stars and tells the deaf universe, “Isn’t everything amazing?” You don’t need to wait for the universe to reply (because it most certainly won’t); the answer is up to you.