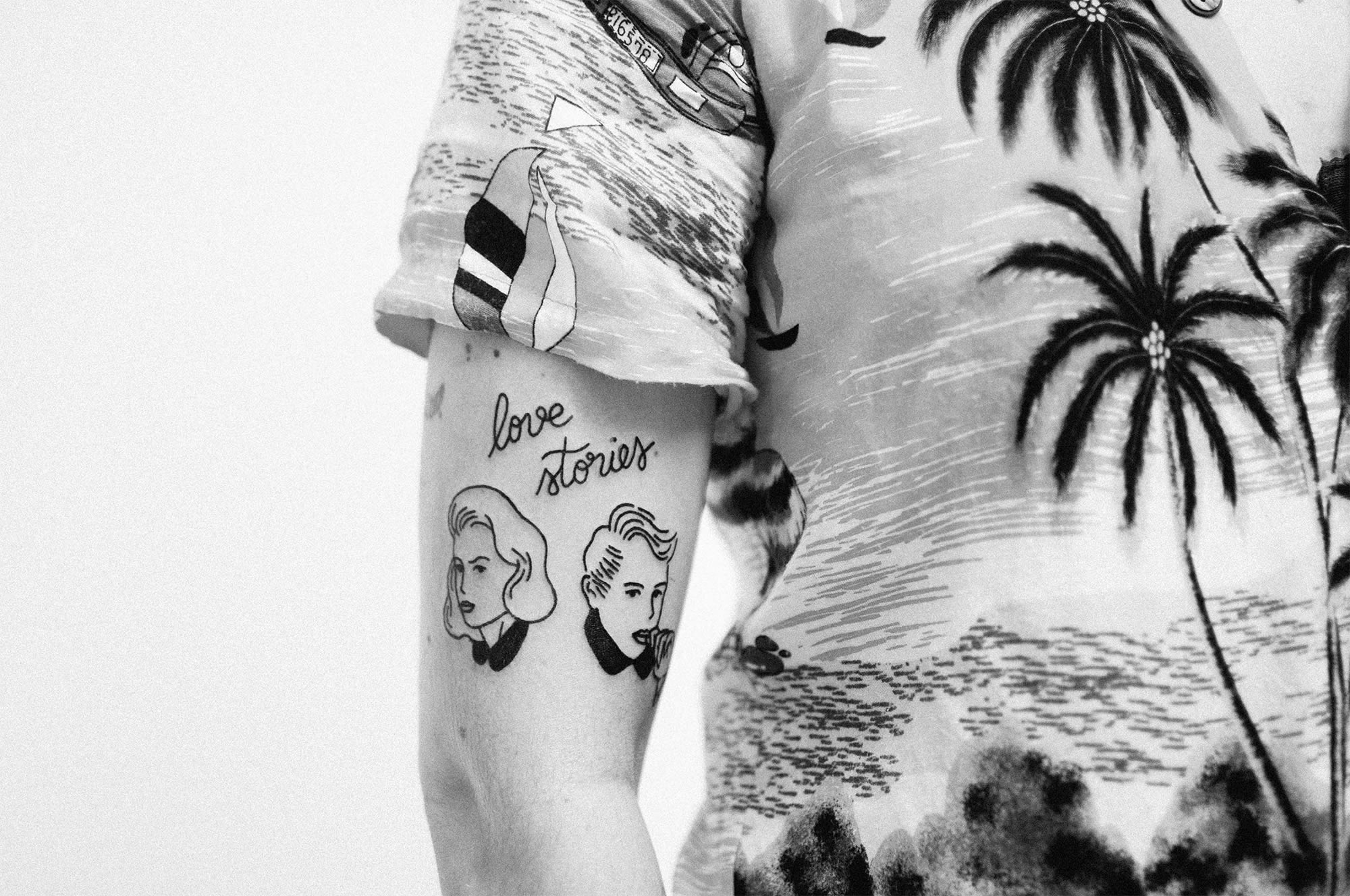 The art movement known as minimalism is ubiquitous today, but it only emerged to prominence about 60 years ago. Established in the United States, it initially referred to artworks comprising geometric shapes.

This approach, which included painters like Frank Stella, Donald Judd, and Agnes Martin, implores the viewer to respond to ‚Äúonly to what is in front of them.‚ÄĚ Stella describes his artwork as, ‚ÄúWhat you see is what you see.‚ÄĚ The advent of minimalist art movement was born from minimalist design, which had its start around the 1920s with architecture. Architect Van der Rohe was one of its first designers who used the materials available‚ÄĒglass, concrete, and steel. Here, it‚Äôs more of a principle rather than style¬†that favors clarity.

Like all things in art, nothing lives in a vacuum‚ÄĒminimalist art and design has influenced other areas of creativity, including tattoos. Body art takes on these aesthetics and standards, using them as guidelines for imagery that says a lot with a few lines and shapes.

Relationships are complicated and Johanna Olk-Rolland expresses that in the “Love Stories” tattoo. 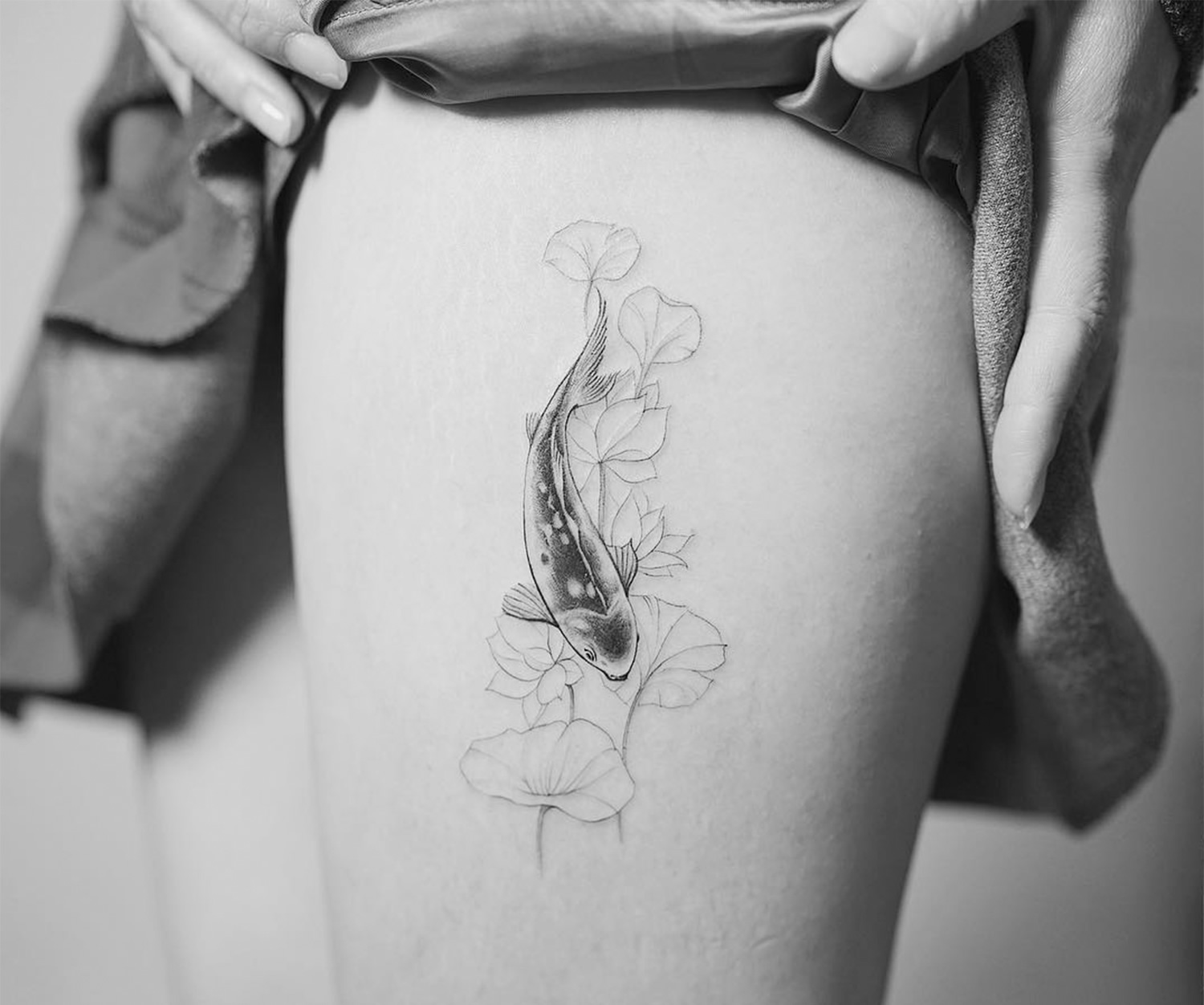 Nando has depicted a delicate carp swimming down the thigh.

Tattooer Nando represents a growing change in the culture of South Korean tattooing‚ÄĒonce associated with organized crime, it has been championed by ardent fans and K-pop stars. This Seoul-based artist has a delicate hand when it comes to creating nature-themed body art‚ÄĒeach is handled with razor-thin lines and soft rendering. A style that permeates through the entire portfolio, which places tiny icons on the back of clients‚Äô necks, their wrists, and sides of their legs. Because of their small size, these tattoos are easily concealed and keep their meaning and beauty just to the wearer. 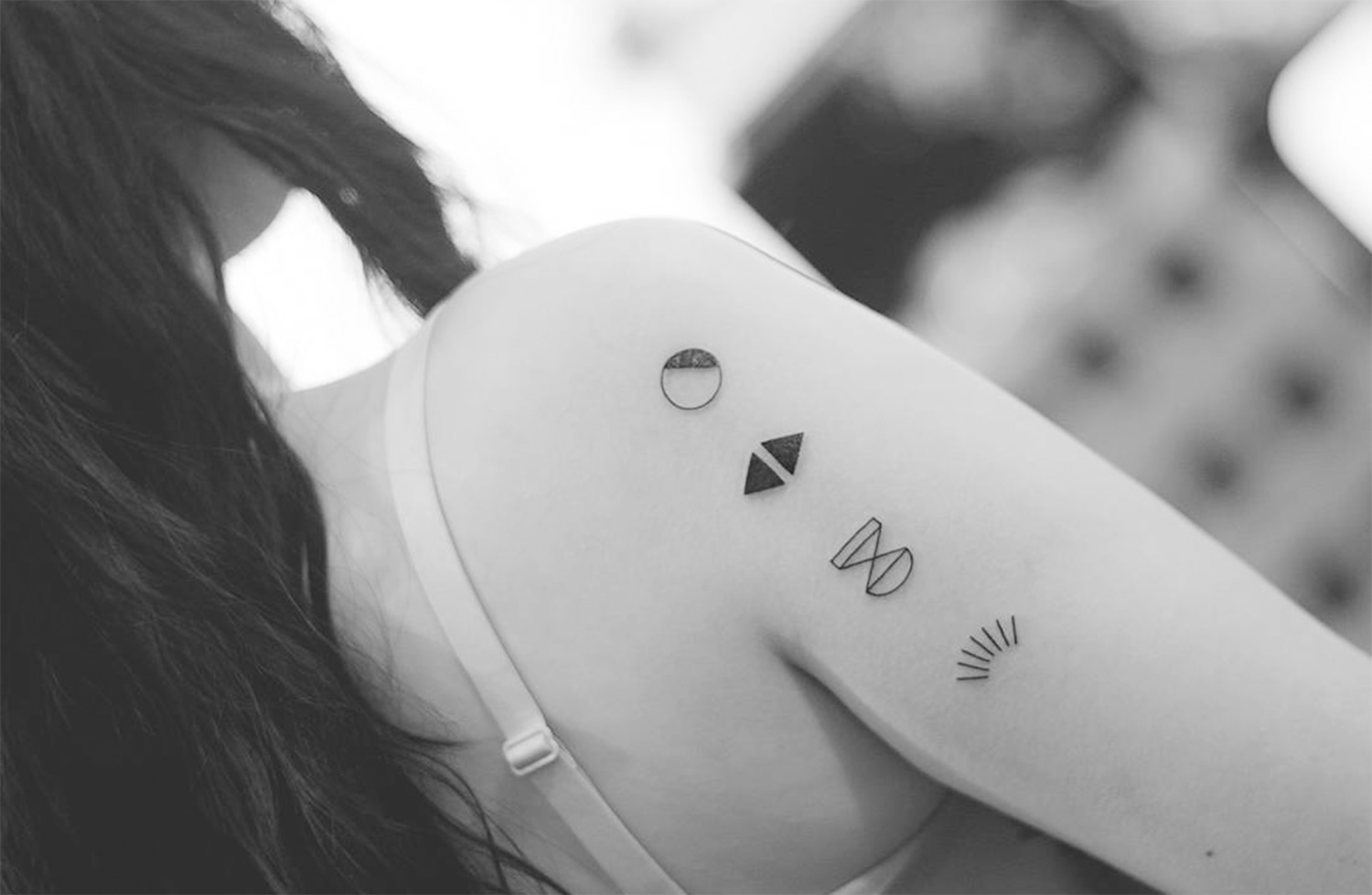 Seoeon has produced tattoos done in the Old School style, but has concentrated her efforts onto minimalism, which has given her the most attention. Known for her inconspicuous work that makes even the most apprehensive clients get inked. The barely there icons and text are, like Nando, comprise delicate and fine lines. Although she‚Äôs based in Seoul, Seoeon travels the world‚ÄĒfrom New York to Hong Kong to Paris‚ÄĒas a guest in tattoo shops. For 2016, she made an appearance in four different cities, bringing her signature miniature designs onto new clients. 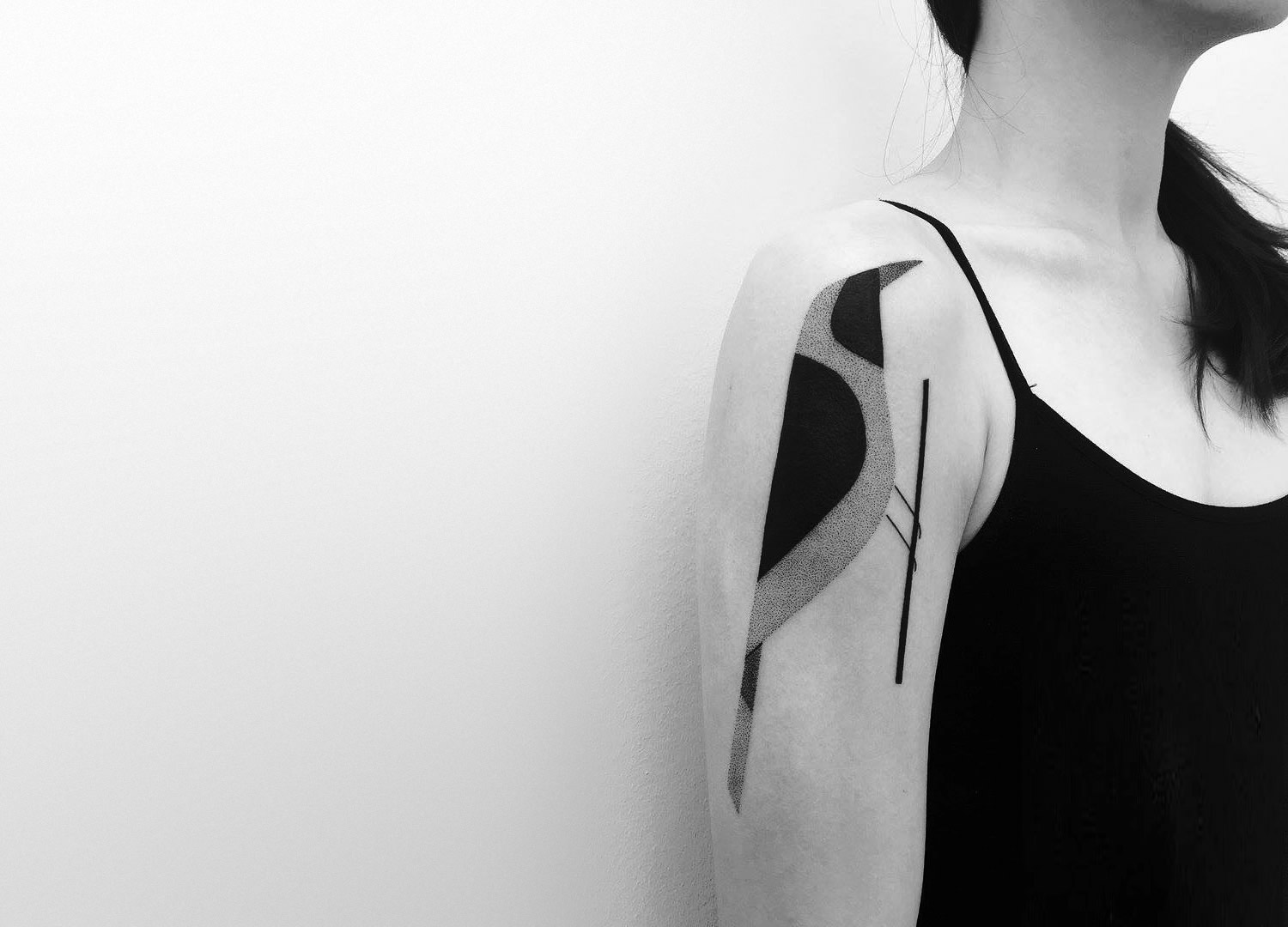 Axel Ejsmont is the tattoo moniker for Marta SŇāawiŇĄska, a visual artist based in Berlin, Germany. She refers to Axel Ejsmont as a ‚Äútattoo project‚ÄĚ that was started in 2013 as a study of ‚Äúhuman body in movement.‚ÄĚ The clean, structured designs are ‚Äúa summary of an art practice and past experience as a graphic designer and illustrator,‚ÄĚ using combinations of repeated shapes formed in complex patterns. Ejsmont is one half of the studio Ejsmont & Fenris Tattoo. 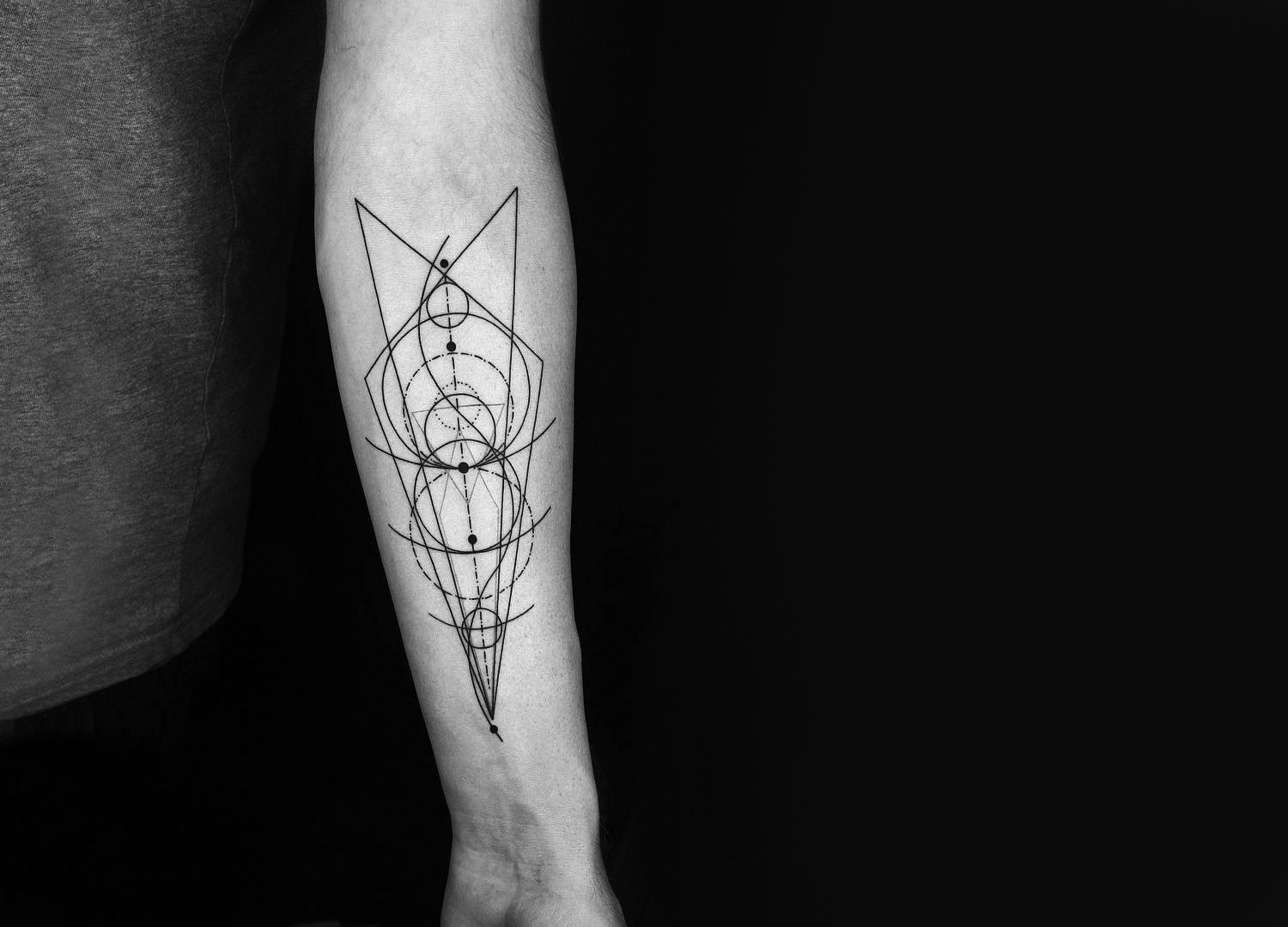 Istanbul-based artist Okan U√ßkun believes that a tattoo is only complete through motion and action. Part of a burgeoning tattoo scene in Turkey, he told us last year that artists have been educating themselves to cultivate their own style and designs. ‚ÄúNow you can see some artwork on people. And I believe that we should be able to see more and more talented people coming out of here,‚ÄĚ he said. To keep his style fresh, U√ßkun is actively working in fields such as video, photography, and plastic arts. 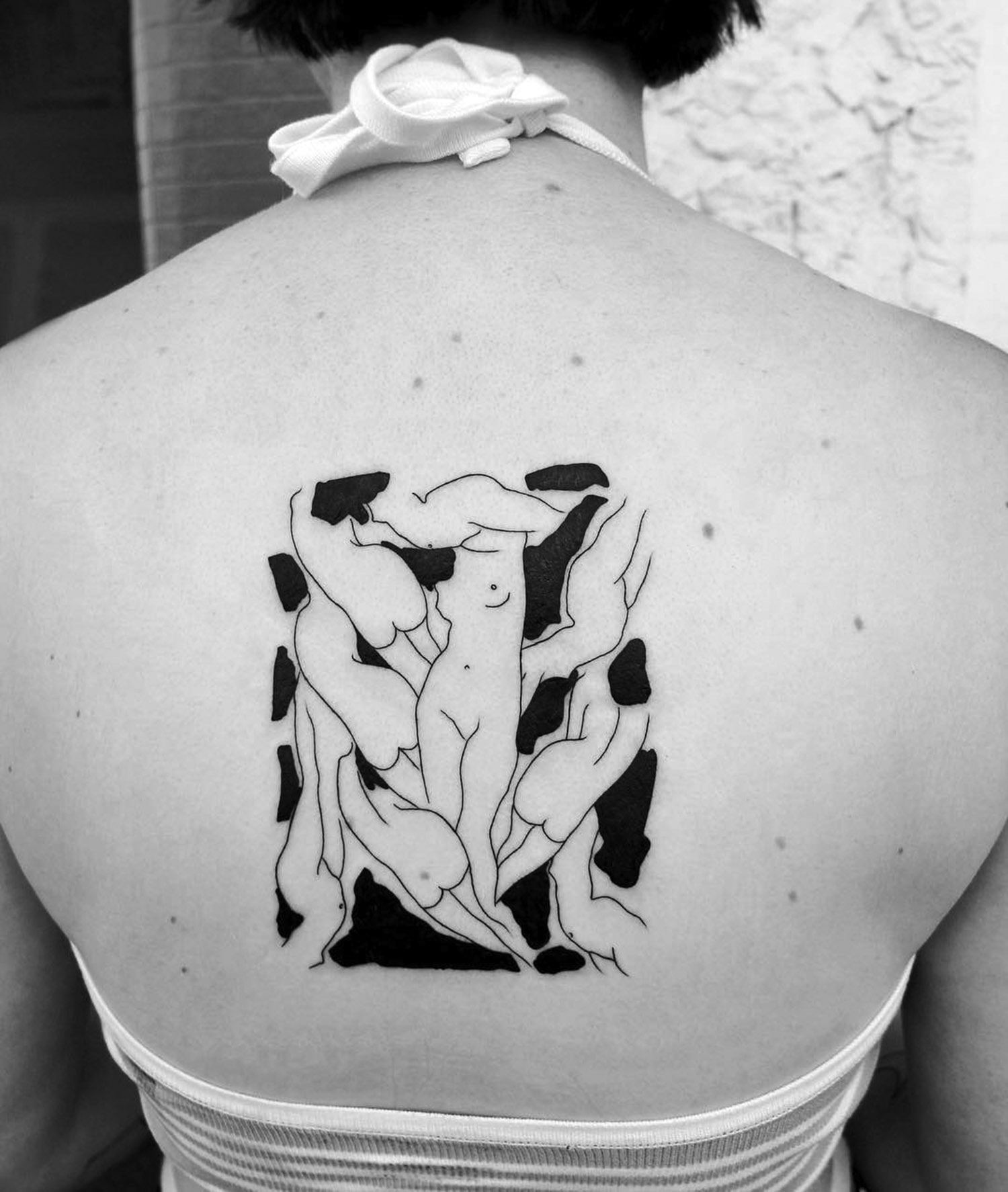 In 2015, Toronto-based artist Jess Chen shifted her career from freelance graphic design and painting to tattoos. ‚ÄúI love anything referencing fine art, whether it’s art history or contemporary,‚ÄĚ she shares. This particular piece was originally one of Chen‚Äôs selection of flash‚ÄĒit‚Äôs a drawing by the French avant-garde painter Francis Picabia. He was known for his abstract, planar compositions like this one. Here, Chen mimics the boldness found in Picabia‚Äôs work with thick, black shapes that offset the elegant lines. 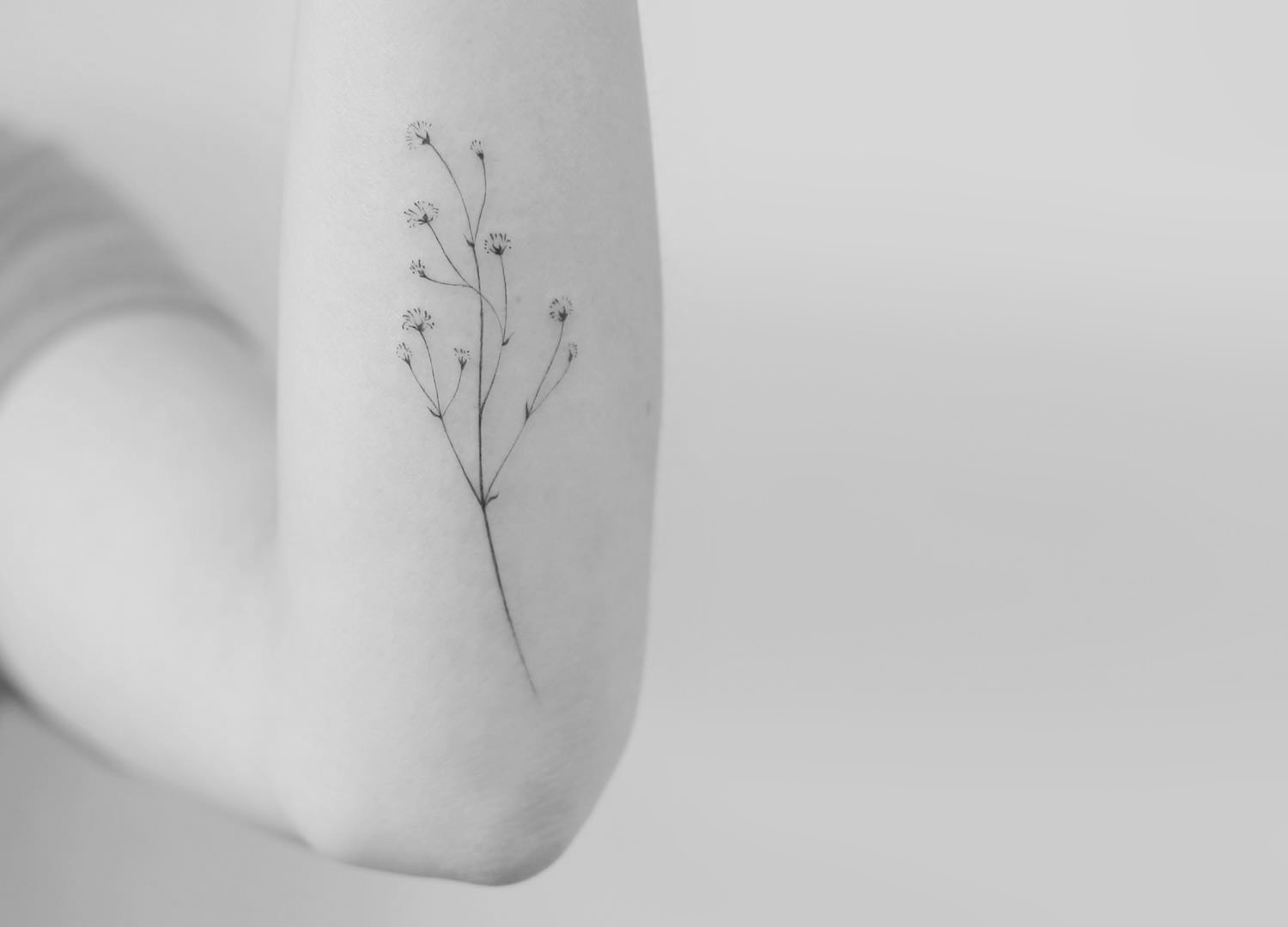 Fluid, thin lines mimic the delicate nature of the plant.

Some tattoo artists start their practice because of their obsession with the field. Others are more practical. Tattooist Doy told Yo Tengo un Sue√Īo, ‚ÄúI always questioned my artistic value; it was something that was always on my mind. So one day I decided to calculate my hourly pay and decided to find what kind of job would pay me the most with the skill I had.‚ÄĚ At the same time, he saw documentary about the New York tattoo scene on TV. ‚ÄúI decided to call one of those tattoo shops in NYC to see how [much] it cost. It was a shocking discovery for me! Those tattoo artists were earning 10x more than I was getting paid.‚ÄĚ That was over 10 years ago. Now, Doy is one half of INKEDWALL with fellow tattooer Hongdam. 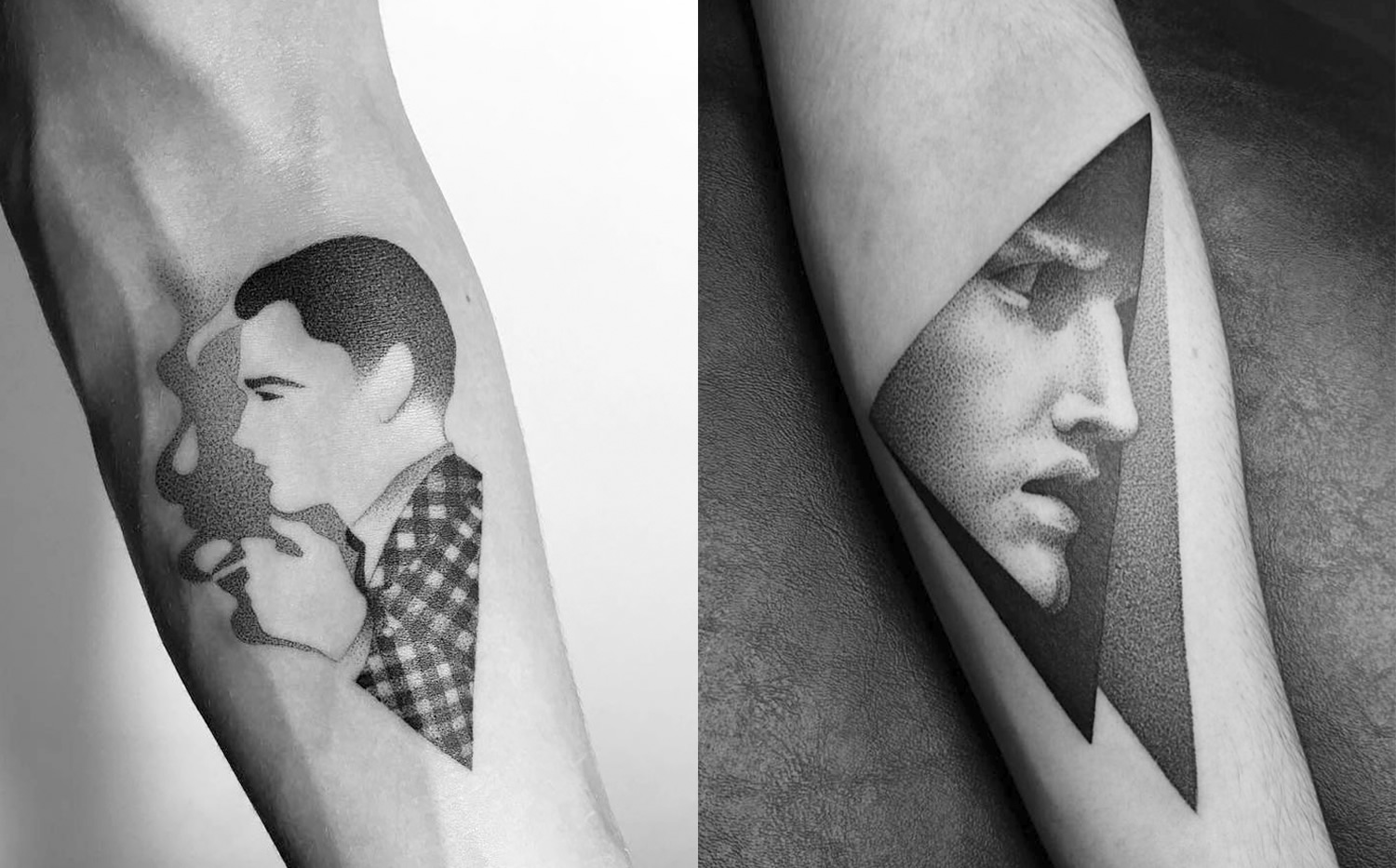 DOTYK creates minimalist work build on the foundation of the movement‚ÄĒshape.

DOTYK, aka PaweŇā Indulski, was one of our ‚Äú10 Tattooers to Look Out For in 2016,‚ÄĚ and he hasn‚Äôt disappointed yet. The intricate dotwork forms geometric shapes that frame silhouetted portraits and airplanes, adding a sense of drama to the bold triangles. Using the stippling to effortlessly fuse with the client‚Äôs skin, there‚Äôs a noted film noir feel. Combined with an architectural influence, it‚Äôs positively minimalist. 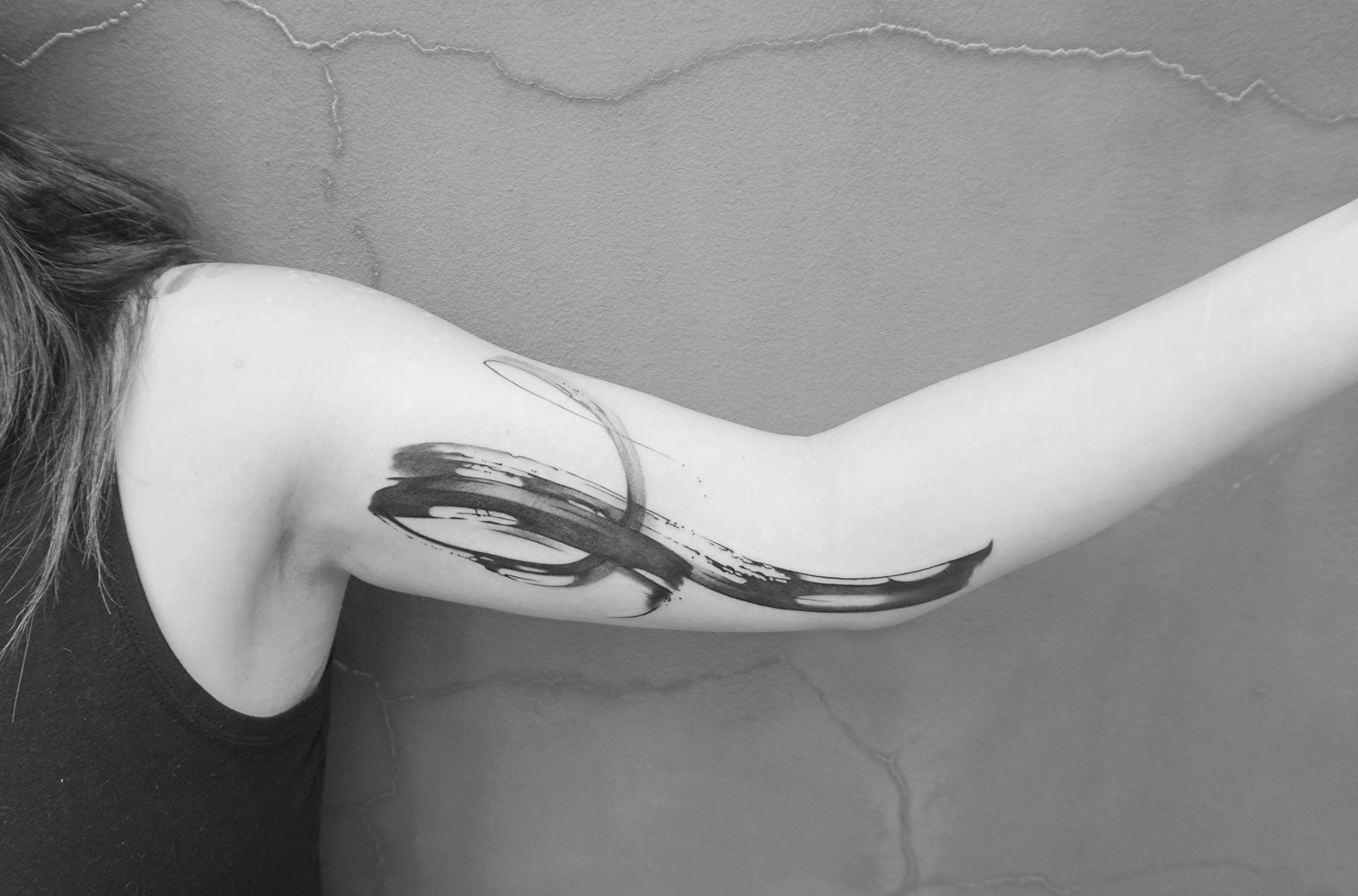 Each brushstroke is tailored to an individual client.

In Lee Stewart‚Äôs work, a brushstroke isn‚Äôt quite a brushstroke‚Äďit‚Äôs a tattoo. Known for these bold designs, the Sydney-based artist says they‚Äôre ‚Äúthe current outcome of the abstract work that I specialize in.‚ÄĚ Continuing, ‚ÄúMy work is largely based on textures and mimicking the details of the way the fibers of the brush run parallel, the little splatters they cause and the gradient of dark to light in one stroke.‚ÄĚ To ensure that these tattoos will complement the wearer, Stewart always gives thought to their location. ‚ÄúAbstract tattoos work,‚ÄĚ she states, ‚Äúwhen these things are taken into consideration and the right parts of the body can be accentuated.‚ÄĚ 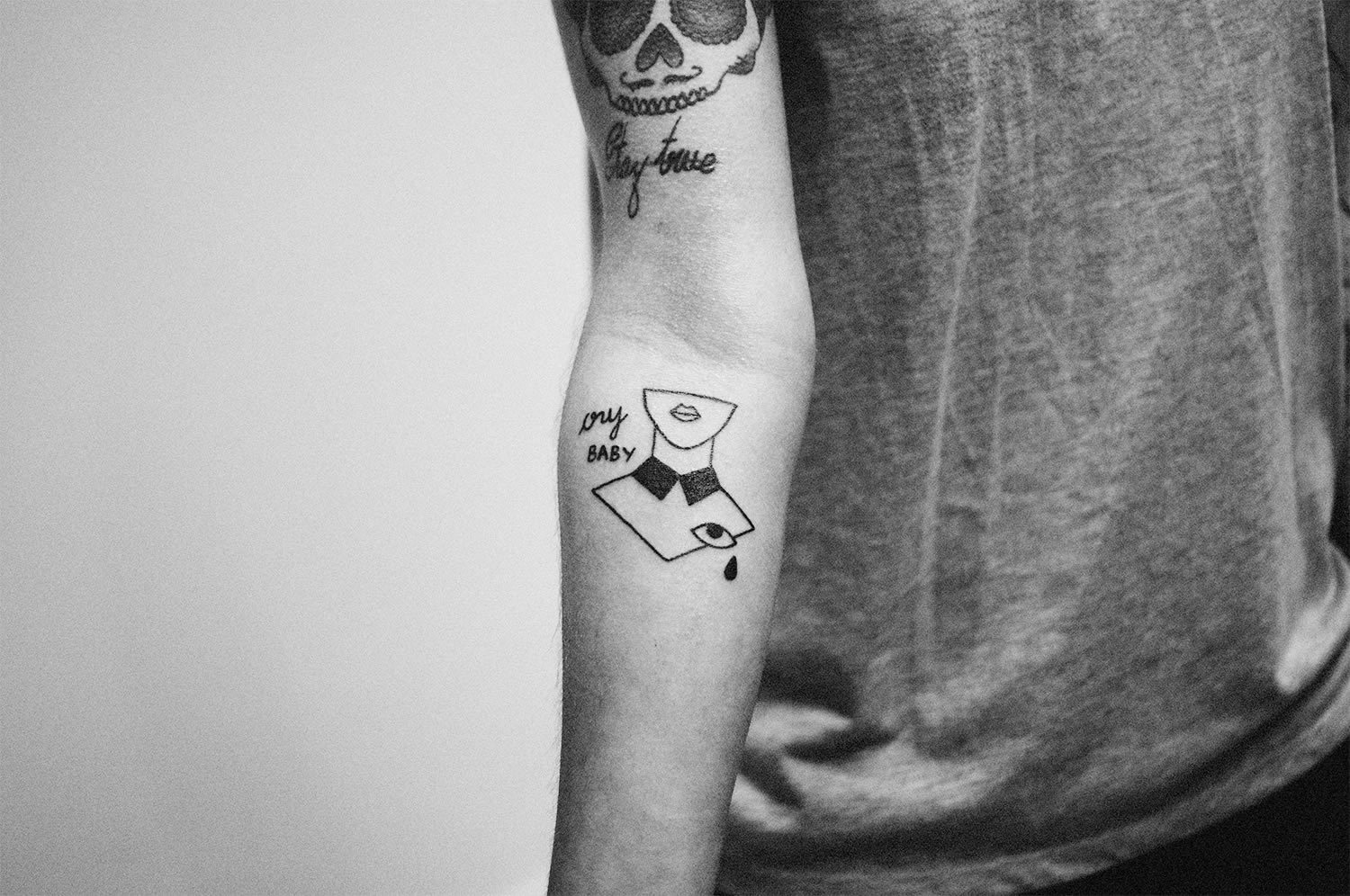 The term “cry baby” has a whole new meaning with this tattoo.

Johanna Olk-Rolland was formally trained in industrial design before developing a love of graphic design and photography. These interests are part of her creative studio called Olkstudio, which allows her to explore different fields‚ÄĒone of those being illustration. ‚ÄúHer passion for illustration,‚ÄĚ Olk-Rolland‚Äôs website says, ‚Äúhas also led her to tattooing.‚ÄĚ Describing her work as ‚Äúsimple‚ÄĚ and ‚Äúclassy,‚ÄĚ Olk-Rolland strives to ink body art that‚Äôs unconventional and ‚Äúfar from what you know about tattooing.‚ÄĚ 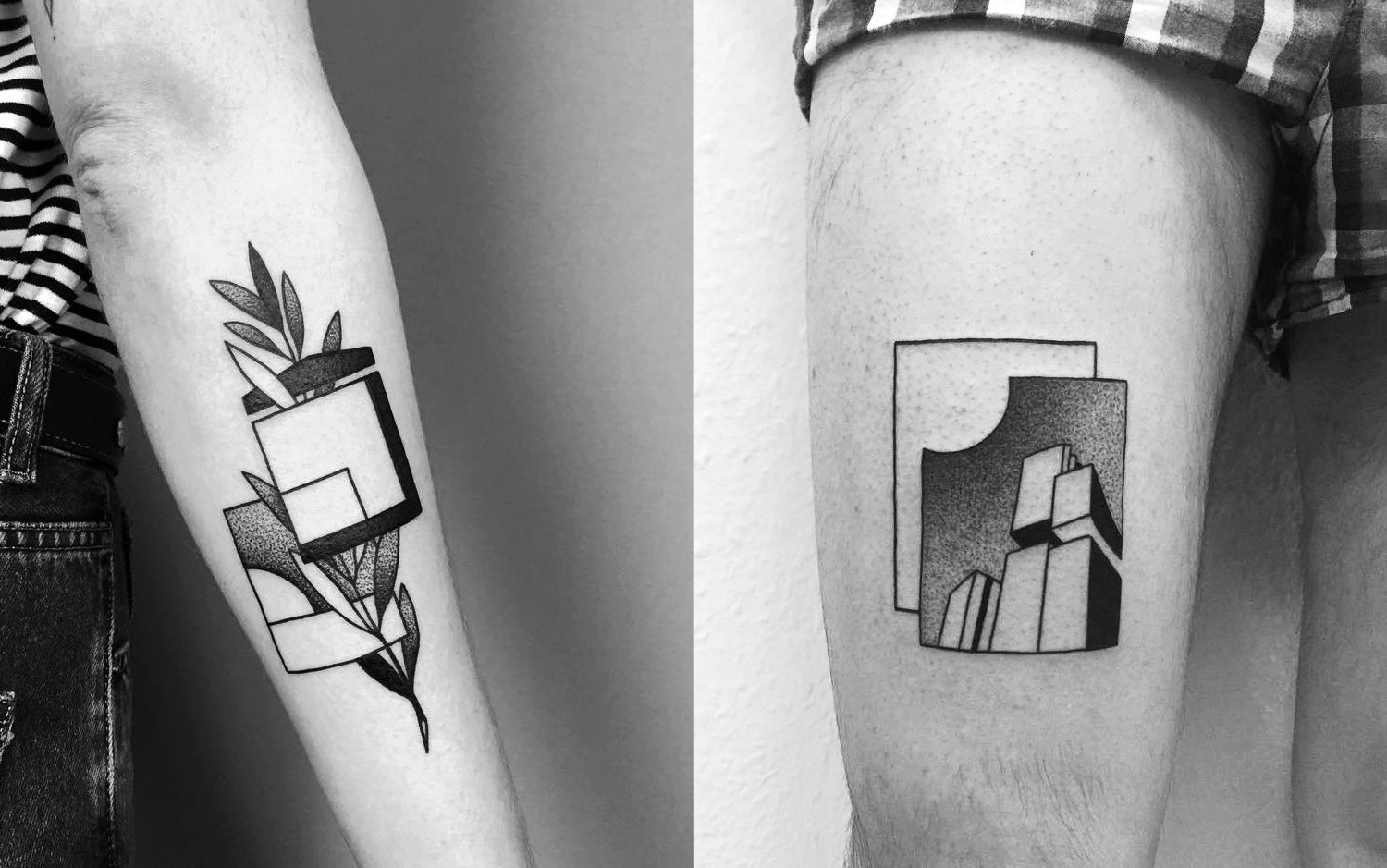 Harkening back to the roots of minimalist design, Nico Jacoby constructs structural arrangements on skin. Like many tattoo artists, he started his career as a graphic designer. Tattooing has created an outlet for him to permanently commemorate his imagery, which Jacoby describes as ‚Äúillustrative elements with a touch of organic details.‚ÄĚ